Another gorgeous day yesterday coincided with my day off which must be some sort of record so Rusty and I were out before dawn, watching the sunrise at Boca Chica Beach whence we left before others arrived and we finally washed up several hours later overlooking the end of the land. A couple of motorcyclists were astride their three wheelers discussing the phenomenon and it occurred to me as I filled Rusty's water jug at the fountain that I need to regain my sense of wonder about being at the end of the road. Danger Charters was looking good even if not making huge progress in light airs. 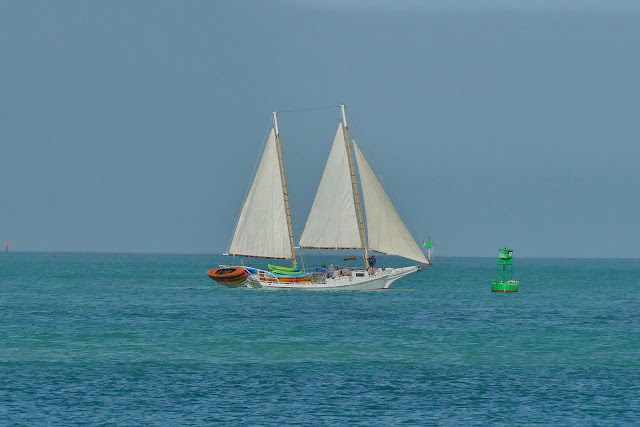 I think Danger offers excellent boat rides if you are interested as they sail a Chesapeake Skipjack with low decks and they will haul you out to mangrove islands where you can kayak and snorkel and enjoy a slow paced day on the water. They have been doing it for years and I suspect they're rather good at it by now. 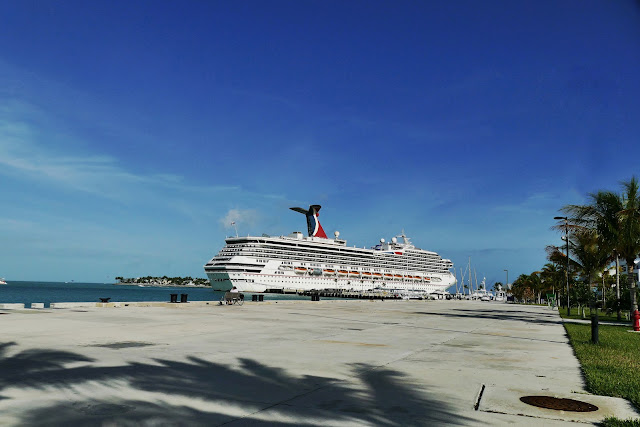 The Truman Waterfront park has retained this huge strip of Navy Base cement, probably horrendously expensive to remove and it s the perfect place for people to exercise their limbs and their bicycles. In winter they do a great deal of it. The decommissioned Coast Guard Cutter Ingham , a World War Two survivor makes an excellent museum plus they offer drinks at sunset on the aft (back) deck. 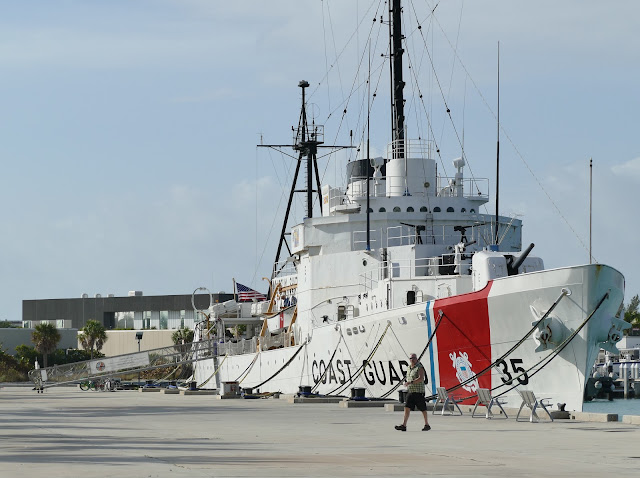 We had been walking long enough Rusty was as ready as I was to take a seat. He sat next to me and pointed with great interest at two large dogs walking by on leashes. There was a day a few years ago he would have freaked out but he is a lot more confident now and I hope the memories of his abuse are fading. 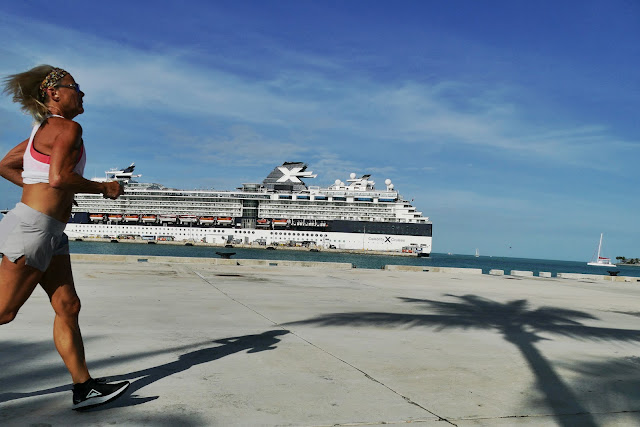 I caught the picture above half by accident as I wasn't properly ready but my speedy camera saved me and I really like the pose with the shadows. She ran with an easy grace the photograph only hints at. In the distance I could see passengers piling out of the Celebrity cruise ship for their ride downtown in the Conch Train and the colors of the cement barriers and the train struck my eye: 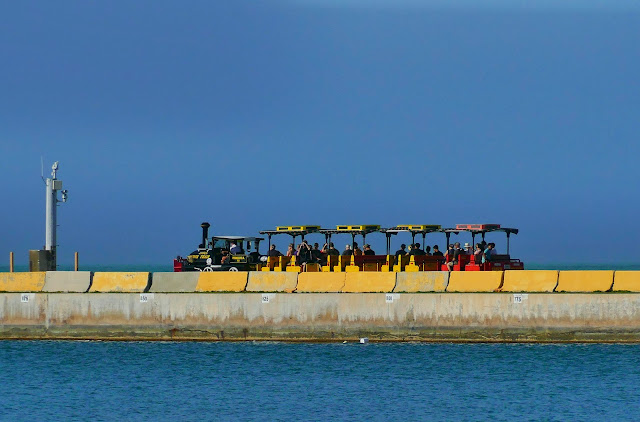 This mad cyclist was keeping himself young by cycling speedy circuits around the waterfront exhausting me just by looking. I spin a lot at the gym but cycling is a meditation for me. The name of the ship seemed like the perfect caption for the search for eternal youth. 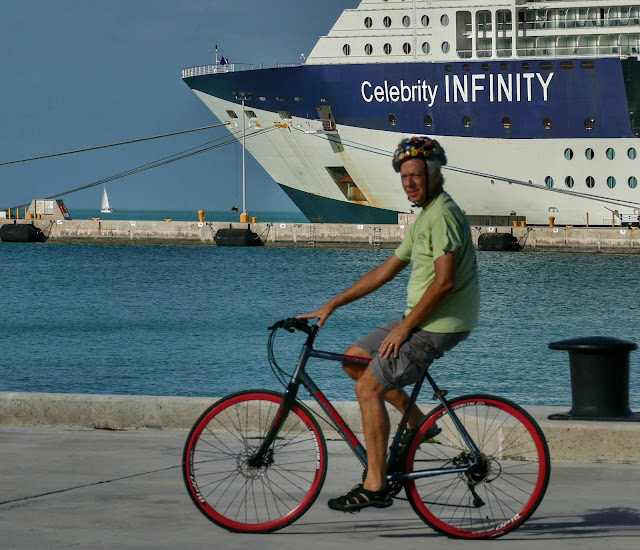 "You come here often then?" They showed up together actually and he spent his time running up and down in panting bursts while she sat and languidly stared at her lap. The photo froze what I saw as a pick up moment. 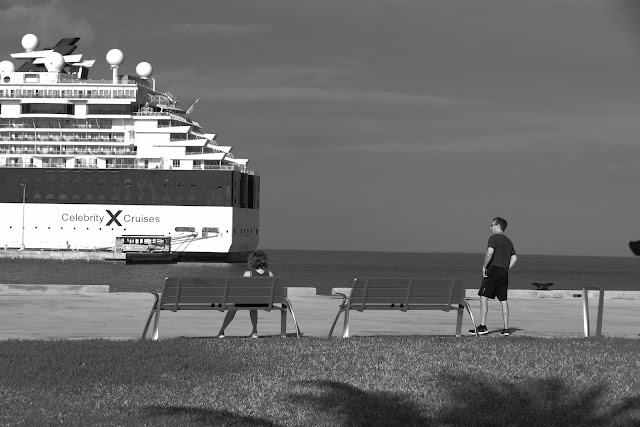 In summer some few people come down here mostly much closer to dawn when it is marginally cooler. In winter it is a crowd of bored snowbirds stretching their muscles and propelling themselves out into the sunshine rejoicing in the shortage of snow. They dress properly and ride clean and tidy machines. In summer I see baggy untidy clothes long fishing poles and not a helmet between them. I prefer them honestly to the trim fashionable well behaved winter primness. 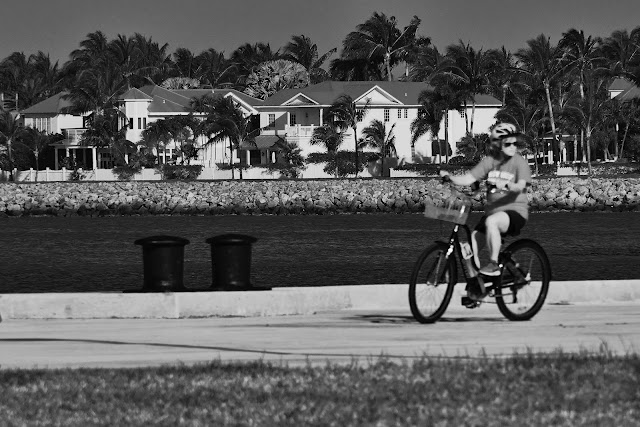 Exercise is serious business. We went to a play last weekend, "Life Sucks," a spin on Anton Chekhov's "Uncle Vanya" which was as always a worthwhile visit to the Red Barn. The players talk to the audience and that sort of thing makes me cringe, especially when one actress, the object of several characters' attention asked "Anyone in the audience want to have sex with me?" I don't see any good answer to that question. She was making a point about private morals and public displays of virtue but It seemed rather clumsy to me. I looked around and most of the audience looked past it to me, which observation was balanced by a group of middle aged patrons who imbibed apparently quite heavily in the intermission and were entirely ready for some audience participation.  I leaned over to my wife and whispered "At least we aren't the youngest ones here tonight" which is a common occurrence at live theater it seems in Key West. She looked at me puzzled. Not by a  long shot she replied. 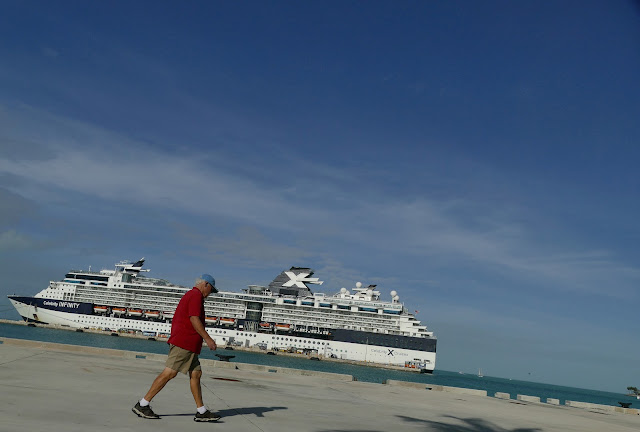 I felt positively juvenile at the Waterfront as parades of people older and faster than myself whizzed by on their endless circuits. Soon they will be gone and measure of torpor will fall back upon us turning the cement into a blazing reflective oven and driving the pelicans to their summer homes. 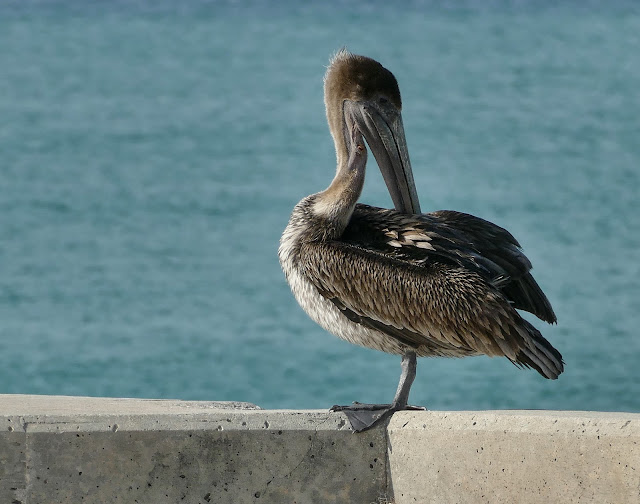 One day before I retire I want to fly to the Dry Tortugas. I may have to drop birthday hints to my wife. I've camped at the fort (and got powerfully rained on too) but I rather fancy the bird's eye view there and back. That should make for some pictures landing on the water. 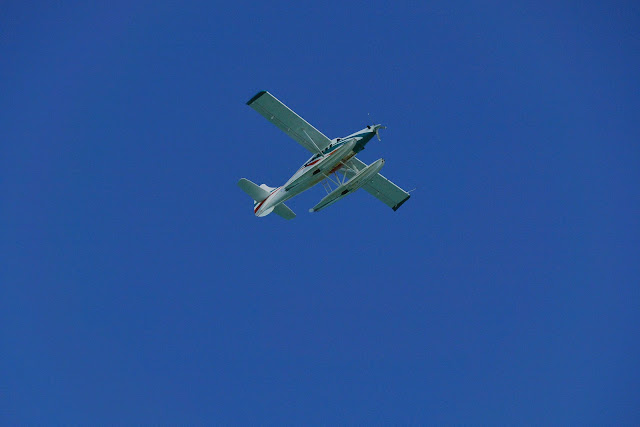 Not sure if the harbor is historic or the tour is or both are. Seemed like a nice calm old folks way to see the waterfront while Danger took off west to the Lakes and shallow waters and back country silence. 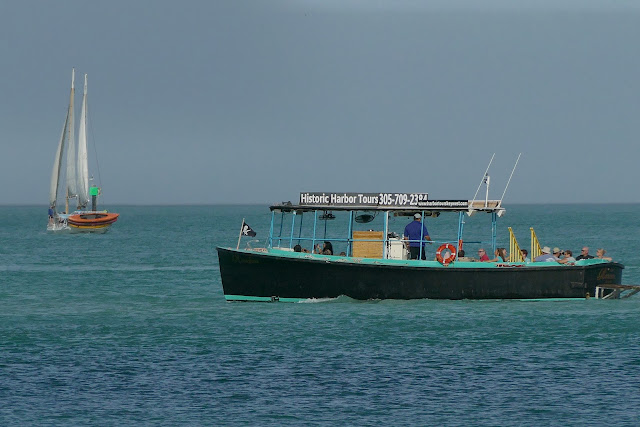 There was a lot of activity on the water, looking good after the windy days kept sensible people bottled up. 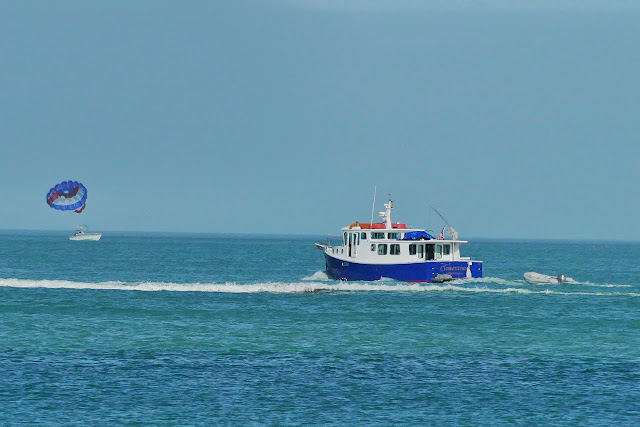 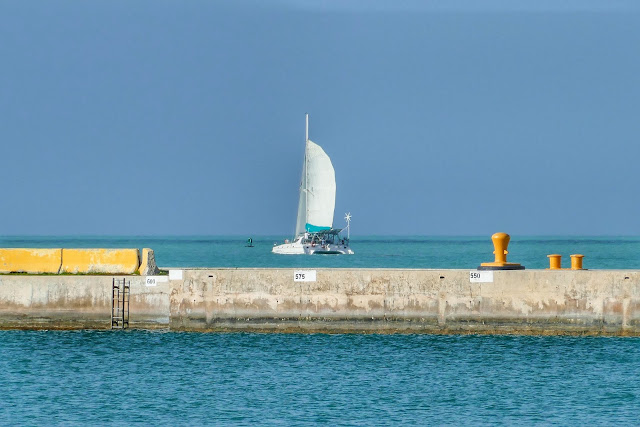 And the cops were out talking about fishing and making citizen contacts to let people know all is well in the city.  It was my day off so I turned my back resolutely and focused on my dog at my feet. Rusty has more curiosity than most people I know and he was watching everything going on around him. He slept solidly once we got home. 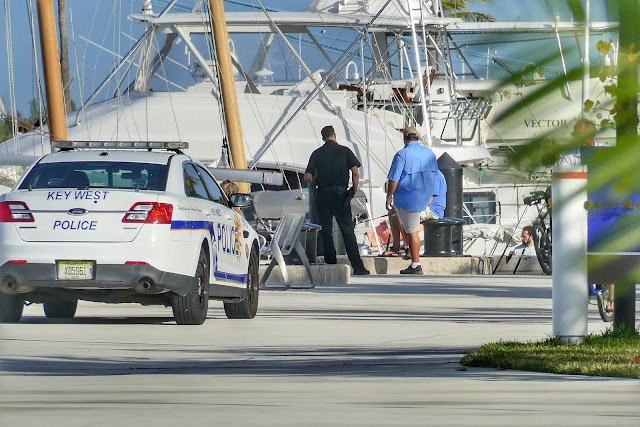 I took this picture to send to my wife with a note remarking on how young people go adventuring and take a bed with them. We thought about a Toyota FJ with an off road camper trailer like this one but we decided that firstly we aren't going to go rock hopping and secondly we want areal home on wheels, not a bed with an outdoor kitchen and off road capabilities that we will never use. But for weekending this set up looks brilliant for a young family. 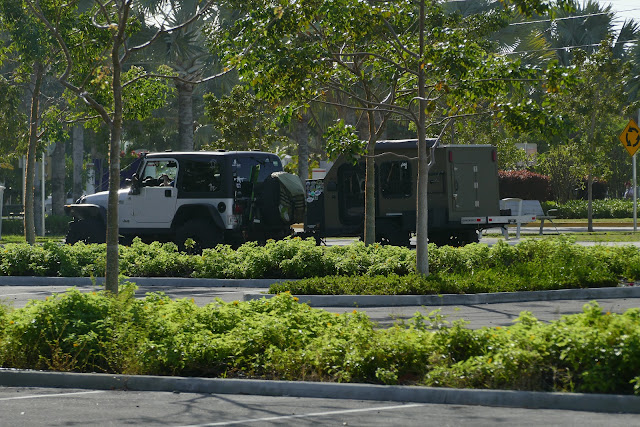 I really rather like the illusion of forest created by the camera and the distance at the very urban Truman Waterfront. Today is another day off (two in a row! Be still my beating heart!) so I plan more travels with Rusty and more reading and I hope less napping...
Posted by Conchscooter at 12:00 AM 1 comment: