I keep telling myself that I don't really need to be lugging the handful of camera that is the Lumix FZ300 because I've been here before, on this island at this time of day. Yet when I leave it at home or in the car I miss something that I can't capture with my iPhone. And the iPhone 6 camera is very good. I got the Panasonic because I wanted a telephoto lense and I got it in a camera that is weatherproof and has built in Wi-fi to download the pictures to my phone very easily. I am not interested in paper prints or getting paid to take pictures so for digital posting here and on Instagram the Panasonic Lumix FZ300 is ideal I find. 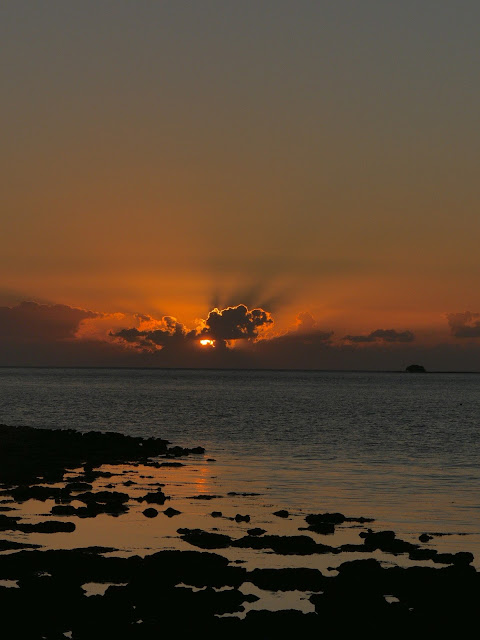 When I was younger I had a Single Lense Reflex camera, a Minolta, with a huge telephoto lense a doubler and a tripod etc...Nowadays with the electronic gimcrackery of 21st century digital not only do I not need a dark room I rarely miss a tripod as the camera is beautifully stabilized.  I carry a spare battery but the power pack lasts for hundreds of pictures and I bought the refurbished camera for $350 which gives me a photo package with iPhone processing in one amazing gadget. 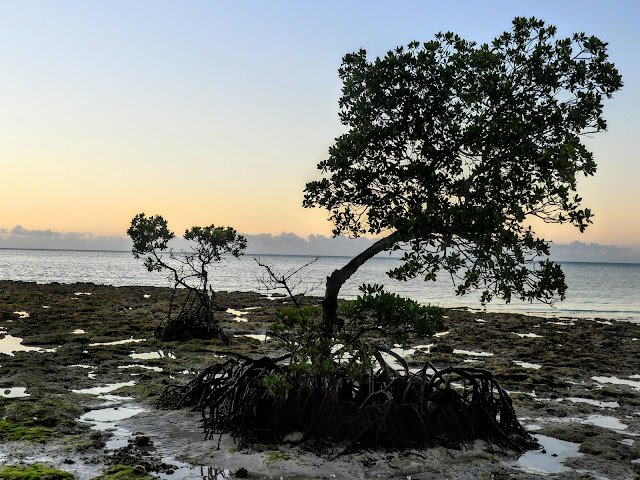 So while Rusty walks I test what I can do with my camera, learning how to use a handful of buttons for a variety of functions to mess with aperture, shutter speed, ISO and all combined into Full Manual Mode. Phew! I look up and Rusty is sitting patiently watching me peer down the hole of the camera's view finder. 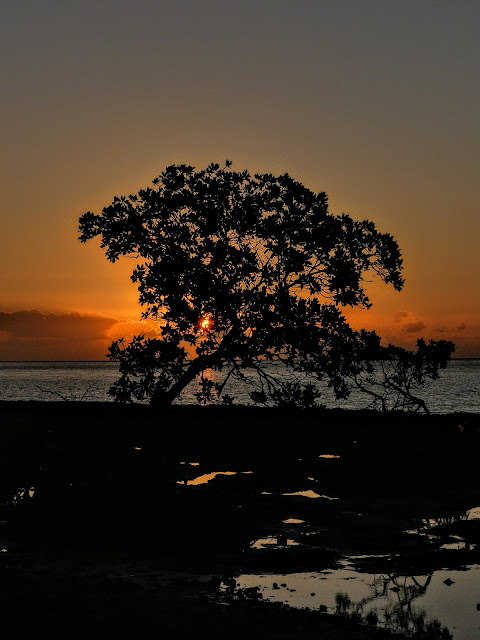 West Summerland Key is known as Scout Key these days thanks to the presence of a camp on the island. I prefer to call it West Summerland as I enjoy the serendipity of its name considering the main Summerland Key is 12 miles to the west....of West Summerland. In any event it is an island that offers photographers opportunities to see clear sunrises, a s[spectacular old bridge to photograph or an iconic palm waving over water...been there done that I have: 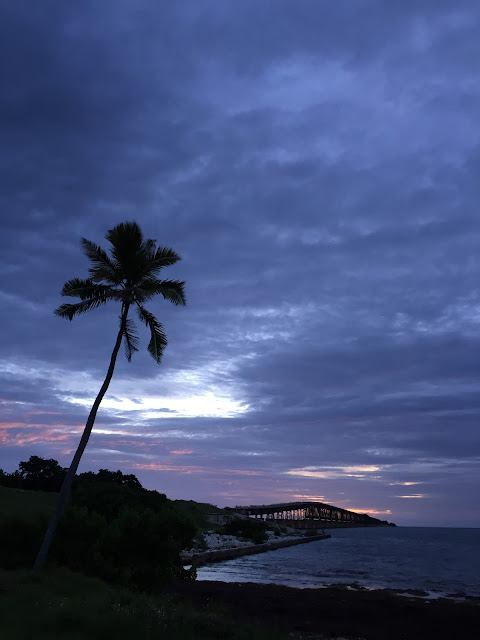 So faced with a bunch of tripods and cameras and earnestly debating nerds Rusty and wandered off to see what new view might strike us. I found a bunch of sponges pushed up onto the seaweed high tide line: 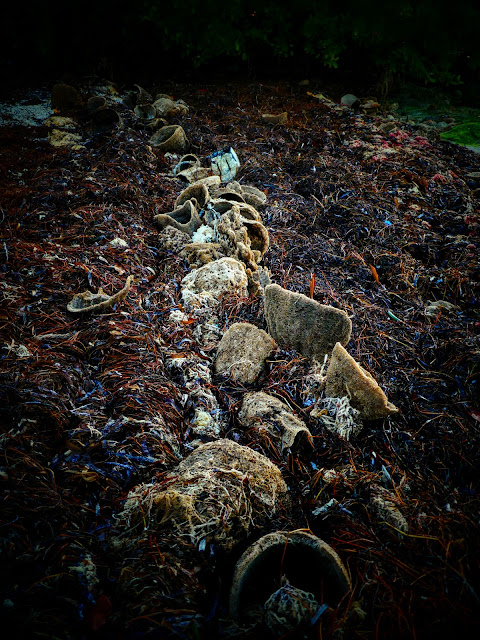 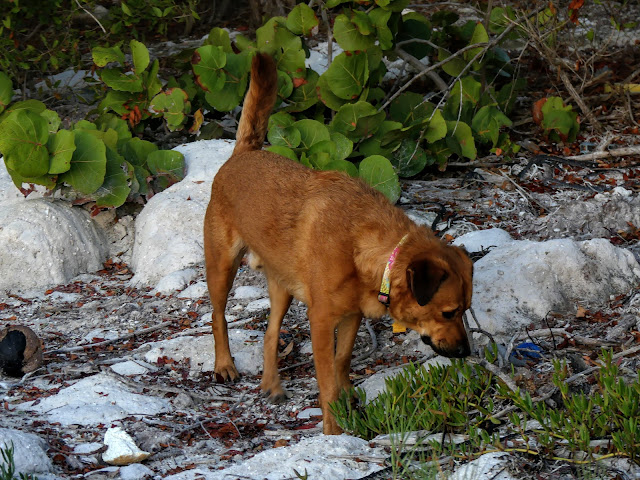 We walked past the massed tripods at sea level over the hill that was created to give road access to the top of the Bahia Honda Bridge in 1938. On the other side I looked across the "deep bay" (= Bahia Honda) at the state park on the other side. Another spot another palm! 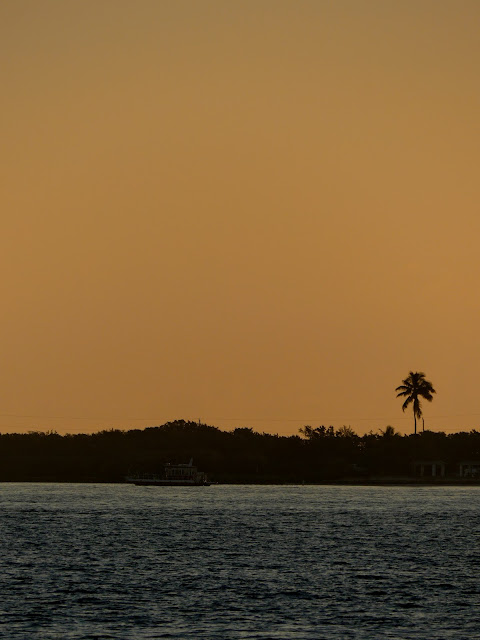 Using the telephoto and mixing in some lighting effects in the camera I took one more picture of the old bridge and liked what I got. 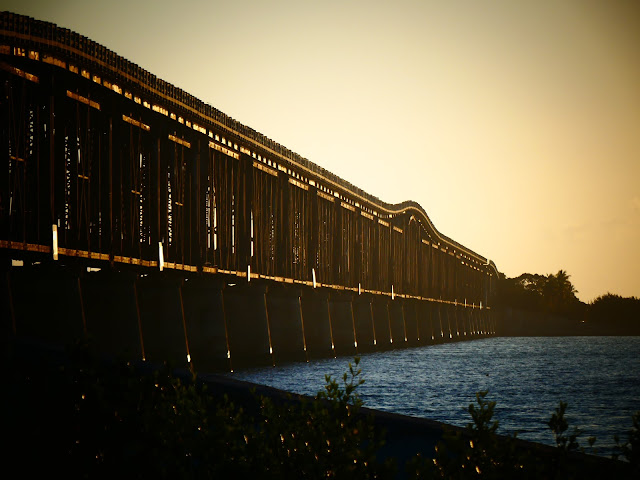 Behind me I made the coral rock wall of the old pump house glow in the rising sun. Photographers are advised sometimes to see what effect the light phenomenon is having. So instead of the sun coming up I tried to see how the low angle light affected the structures behind me. Like this: 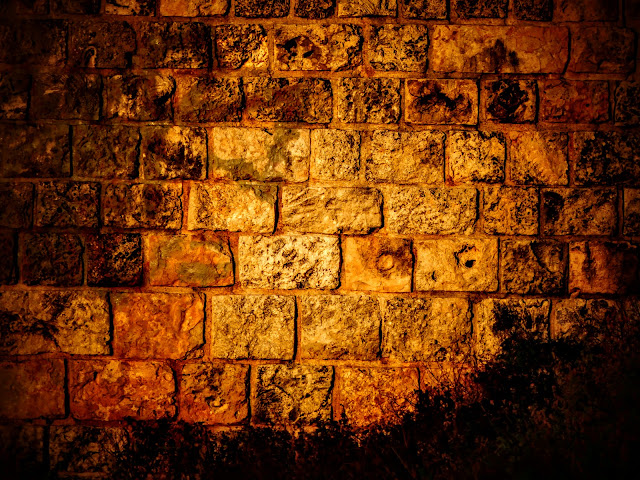 It was an exceptional low tide so I figured to take advantage of that fact and captured some sand ripples, the sort of beach at low tide effect not often seen in these rocky islands: 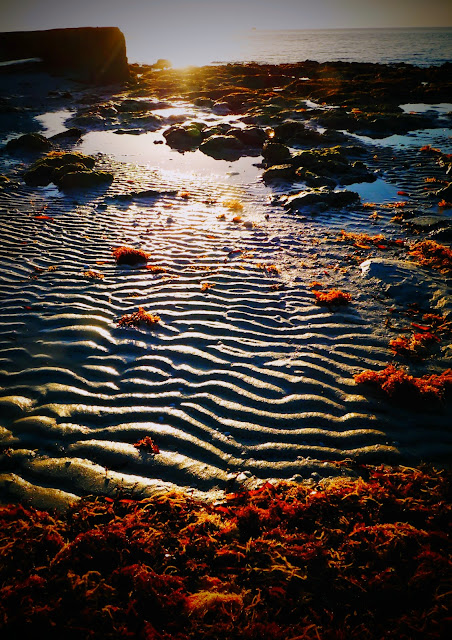 Rusty was resting in the grass and I was downloading the pictures into my phone and deleting the ones I didn't like when a voice called "Rusty" and wasn't I surprised when a body descended from the camper and it was a guy I met here a month ago worried about Rusty being off leash. He and his girlfriend were leaving the Keys headed to New Orleans to make money doing magic with their two new dogs partly trained and doing much better he said. He was surprised how relaxed his dogs were off leash compared to how tense they are when leashed which I don't find surprising.His plans are to go south from New Orleans and find his way to South America. We exchanged pictures he mysteriously covered as shown I smiling gormlessly into his phone with Rusty behind me and we went our separate ways. 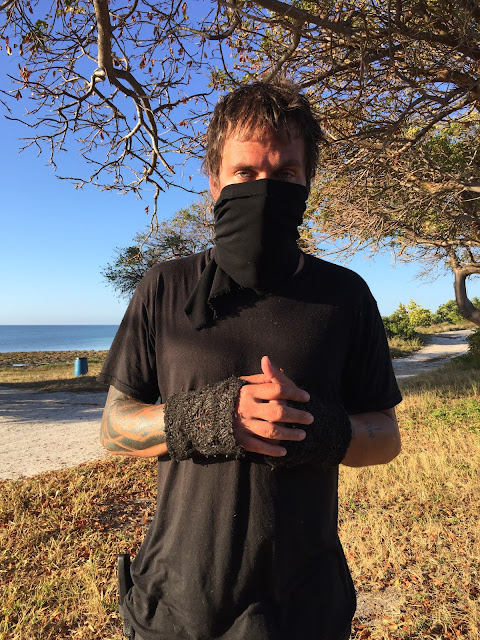 Walking the dog is an excellent way to relax after spending all night answering 911 calls.
Posted by Conchscooter at 12:00 AM 2 comments: