I went by the old Lemonade Stand art studio on my lunch break and posed the Vespa for some pictures. 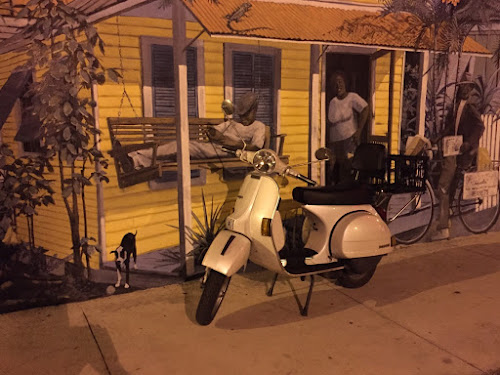 It was goofy sticking my old Vespa into the painted Bahama Village street scene but I enjoyed playing around for a bit with my new-to-me iPhone camera. A young kid with a delivery moped pulled in alongside and started asking me about the Vespa, joking about me selling it to him. Hell no I said it's taken me too long to get it sorted out. At which point the damned thing refused to start...so I pulled the plug and found it oily after riding around town at low rpm so I cleaned it and adjusted the air/fuel mixture screw. Which skills and the sight of a tool kit must have persuaded the modern youth that I was half a mechanic because he asked me to look at an oil leak on his scooter. 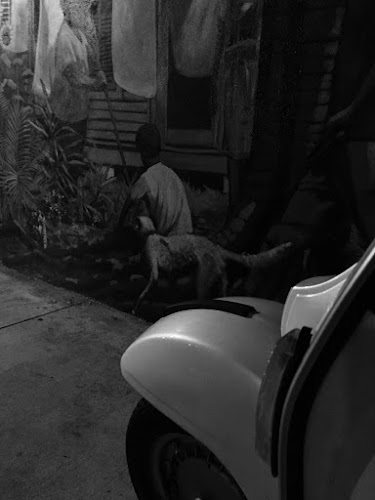 Like the t-shirt says, I'm no gynecologist but I'll take a look...I poked around and diagnosed a split oil tank and told him not to overfill it but make sure he has oil in the tank or he'll seize. And take it to Andy's for a proper diagnosis. It's weird how people trust strangers with no visible qualifications. 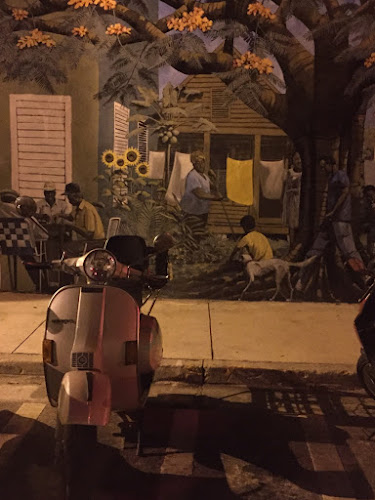 It was, after that encounter a silent and empty village, so I stopped in the middle of the road for a picture. Why I appreciate Key West: old architecture, dim street lights, and at this hour no one ( else) to bother me. 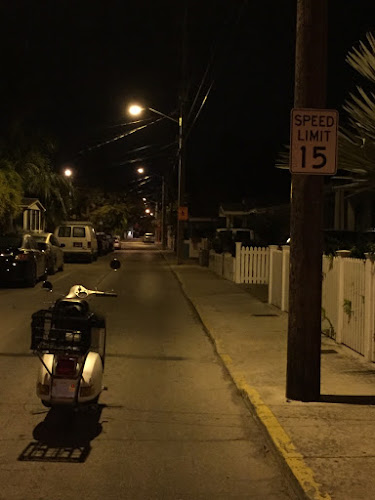 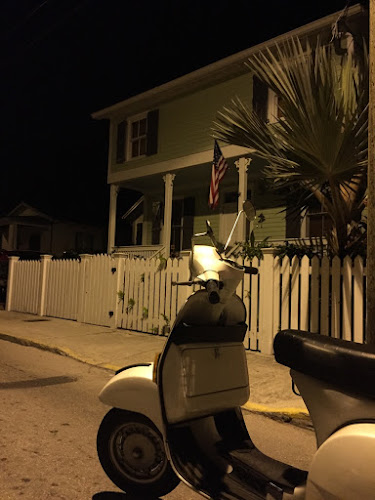 Beauty is in the eye of the beholder, an over quoted thought but when I stopped for some pre-work caffeine and some people watching from the deli bench on Whitehead Street I noticed this green thing was believed to be an object of beauty: 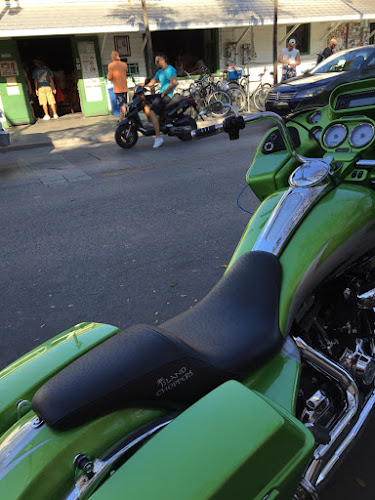 The "island chopper" seat, the extended forks, all bright green and the ironic tag, appealed to passrsby. In my head the tag referred more to the style, as factory stock Harleys are actually quite sturdy useful tourers as long as you don't want to lean over too far. But this expensive exercise in styling seems like a waste of a good bike to me. 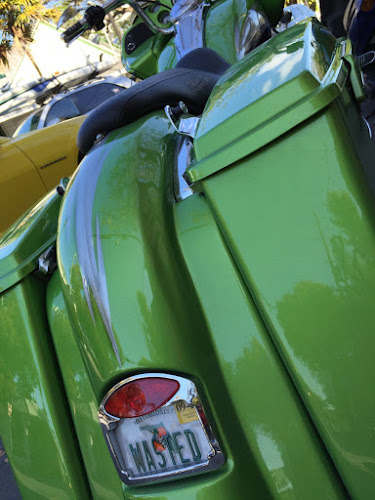 I was in a minority opinion though. Can you imagine the expense, beyond the basic $20,000 bike? And all its good for is going to the Green Parrot? 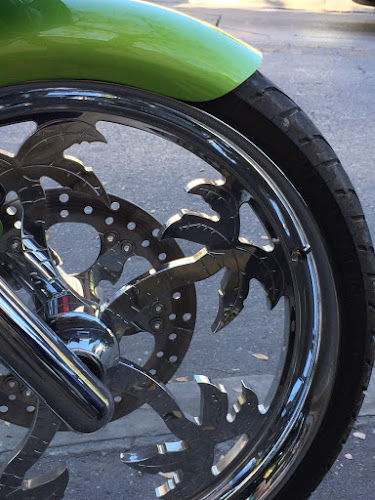 Well, anyway, there it is. 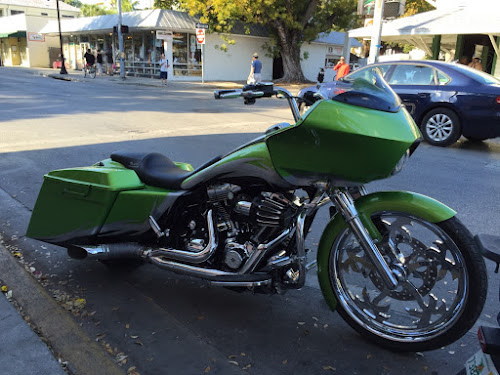 And then I had another human interaction over my antique Vespa. Parking was crowded and I gave up my spot to a waiting Yamaha Vino 50 whose rider it turns out lives not far from me up the Keys. He was surprised I commuted from Cudjoe on my antique. I told him owning an old scooter is like being a secret society member, a whole world of parts suppliers mechanics and owners out of public view but connected by the Internet and a weird need to own Old where New will do. I could see the wheels in his mind turning. 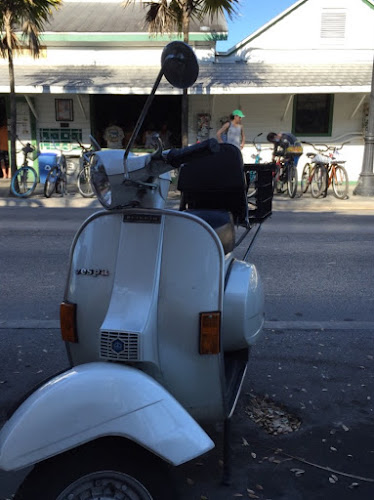 Driving up the turnpike I had a "Zen and the Art of Motorcycle Maintenance" moment. He was older wearing a helmet and shorts in suitably casual style, his passenger was younger and the bike was an 80s Honda with a rectangular headlight. 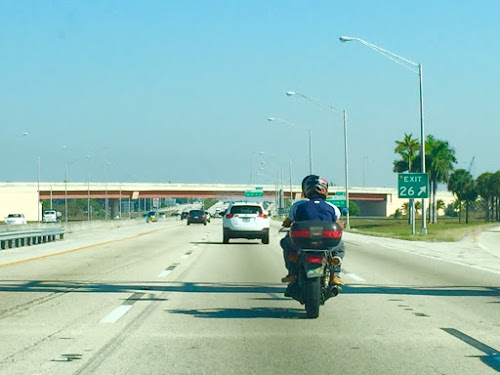 You don't often see old Universal Japanese Motorcycles cruising the Turnpike at 70 miles per hour and I wondered what they were doing. 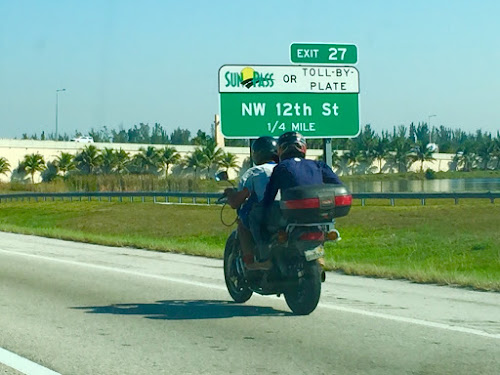 There has to be a motorcycle sub culture in Miami that isn't old farts on Harleys or young kids on sport bikes. Perhaps this is evidence of something else? 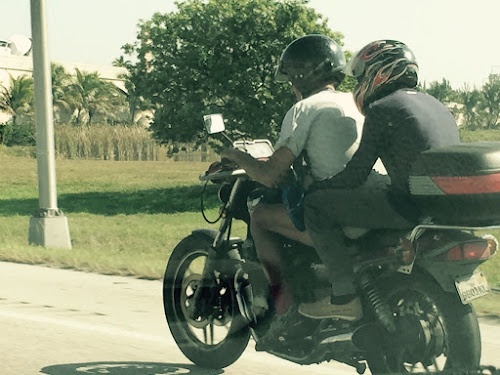 What do I know. It was my turn to be a zombie in a car. Sigh.