This stone house on Caroline Street is  on sale for $800,000. I have really no idea what to say other than that I am not surprised, and that fact surprises me. Twelve hundred square feet, two bathrooms, no garden and no offsets to speak of and clearly in need of some care. At least it does appear to have off street parking. 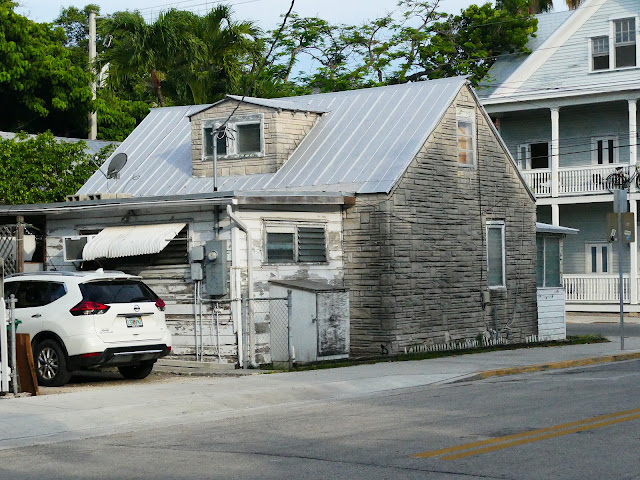 I was wandering loose with Rusty of course and actually I was looking for Doug Bennett who lives in the area but every attempt to spot him on his porch has failed. He was really nice when I was in the hospital and I wanted to show him I was well again as I had promised but so far no luck.  On his blog he has some excellent pictures of Teeki his dog: 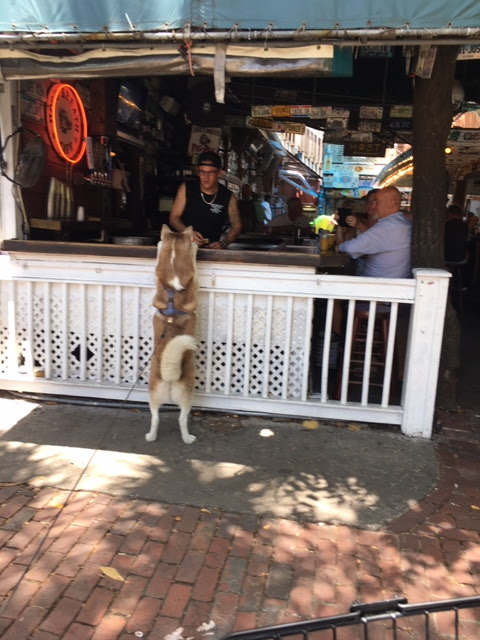 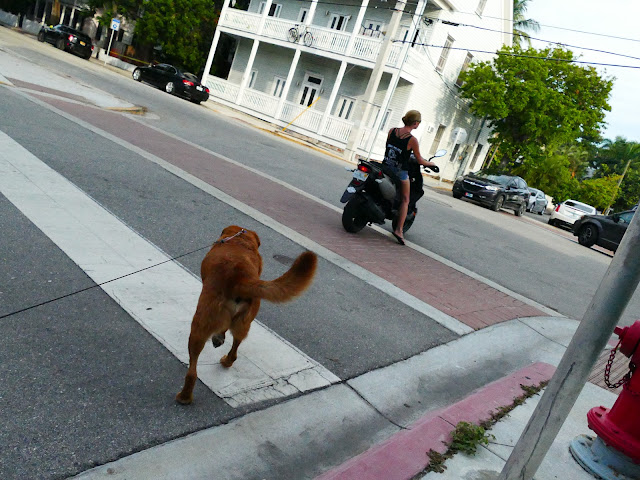 I see these from time to time, houses raised, not often to be moved but to be rebuilt from, as they say, the ground up. This is the time of year property owners, snug with their families Up North soend money Down South to fix things up. 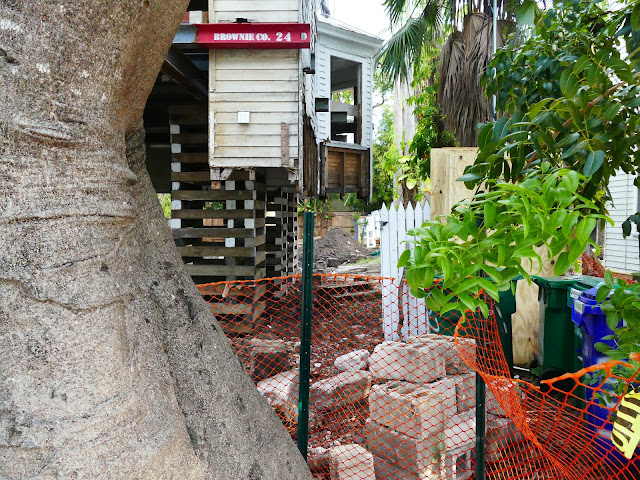 And when you see these old wooden houses surviving in this harsh hot climate you wonder how they hold up and then you see this and it pouts you in mind of old wooden boats which are sometimes rebuilt from the keel up but are not considered to be new, just rebuilt.  It's a lot of rebuilding. 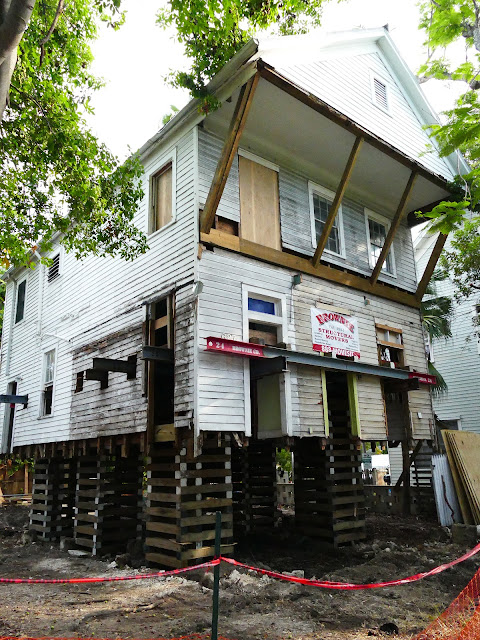 On this house (below) I liked the old wooden shutters however this lot have the addition of hurricane proofing, sort of, in the form of wooden planks across the shutters. I am often forced to the conclusion that hurricane precautions are more to make people feel like they did something in the face of catastrophe, even though those things probably won't do much. Wooden planks in the face of hurricane force winds seems  more like a  placebo - but you never know! Hurricanes are weird and the effects they produce are utterly unpredictable. 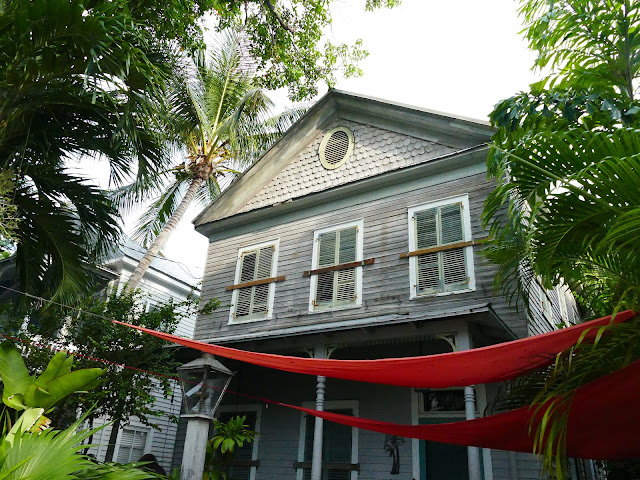 I really like looking down the sidewalks in Old Town Key West, as they give a particular perspective, sometimes like a tunnel under the trees. 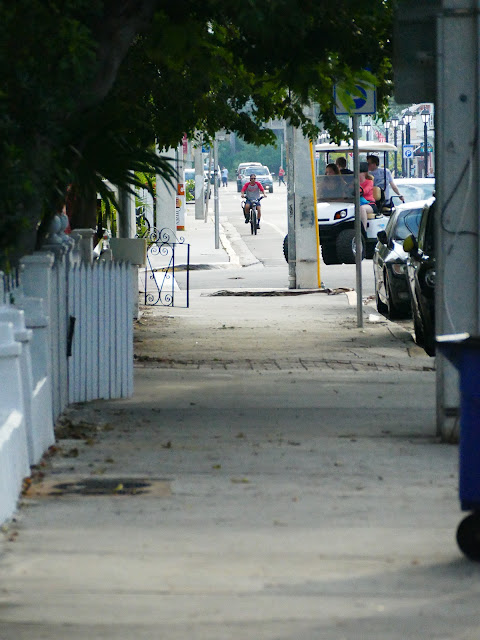 Danger! A swimming pool! Watch out!  Actually I thought it looked very enticing on these hot stuffy days. 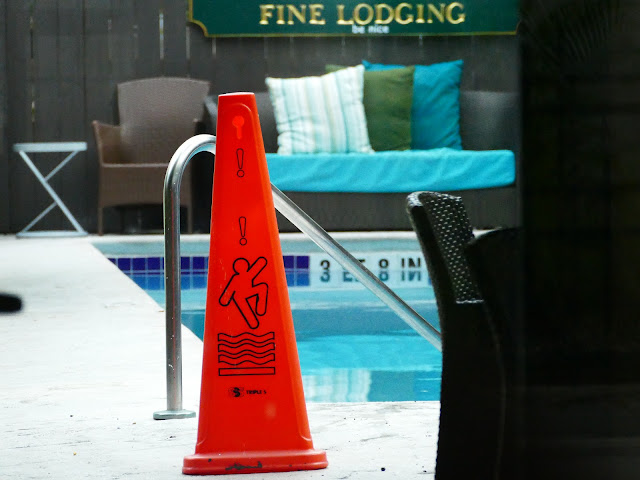 I know flower pictures are corny but there is so much color on the streets thanks to all these gardeners and even though I am a hopeless botanist I do enjoy them. 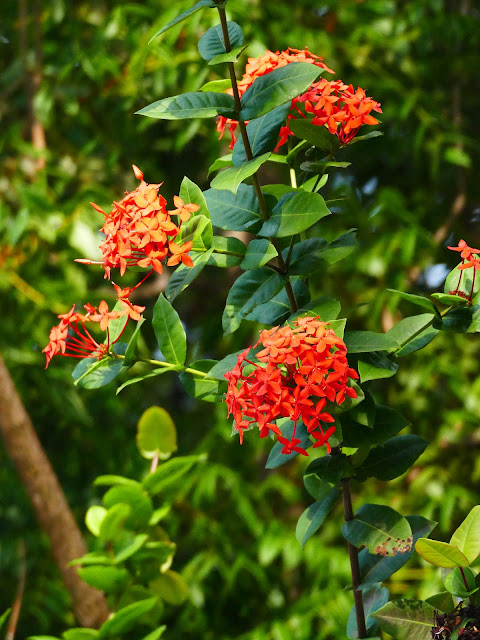 I saw a couple of sets of these dudes sitting quietly on the sidewalks off Duval Street studying their phones. They were all young Asian men and it occurred to me they were crew members taking a break off a cruise ship. I wanted to talk to them but I figured they probably really wanted a break from being nice to strangers so I walked on. The picture I took from the side just to illustrate the point. I have a feeling we who may or may not ride cruise ships from time to time probably don't think too much about the tedium of being a  crew member away from home for months at a time. Perhaps I'm just over thinking it. 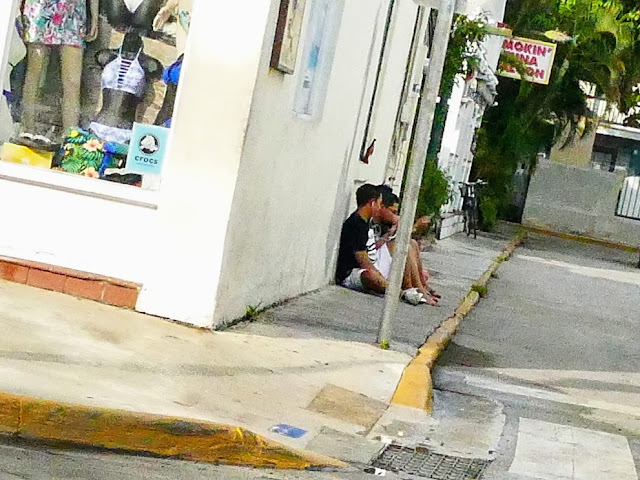 It was early and the Sloppy alcohol delivery emporium at Duval and Greene was still closed as Rusty and I steamed by. In the distance you can see a delivery truck down by Conch Republic and Kermit's Key Lime. Trucks have to finish their deliveries by noon on Duval Street so this wasn't the afternoon. 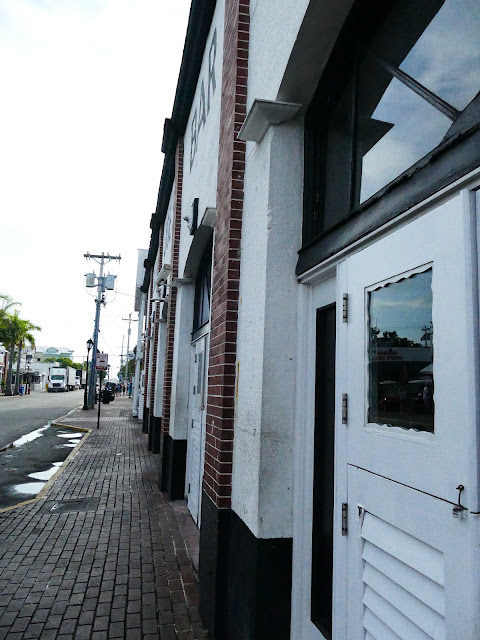 One more stupid clothing store on Duval. It speaks for itself but what I wonder is who buys these things? Are there women across America panting to rip clothes off men to find a farting pair of underpants underneath? Is something going on that I don't know about? 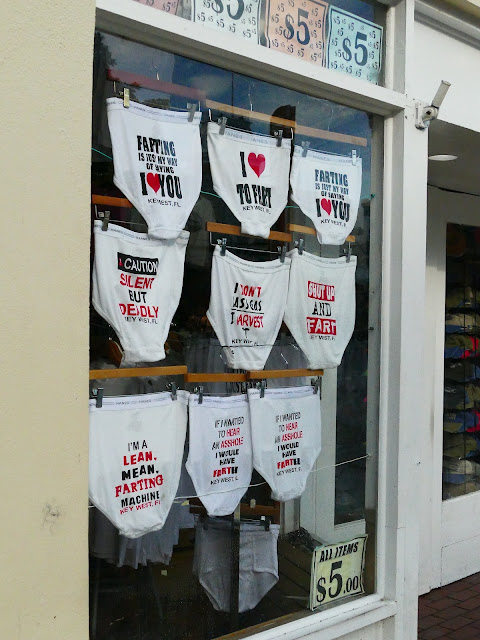 The rents on these storefronts is horrendous and  how they pay for them in underwear I don't know. Just one more things that is a mystery to me.
Posted by Conchscooter at 12:00 AM 3 comments: