A bight for sailors is an indentation or a loop, as in a bight of rope or a bight on an otherwise featureless straight coastline.  The Key West Bight is an indentation that is now surrounded on three sides by buildings and along the fourth there is a rip rap seawall with an opening to the harbor outside. 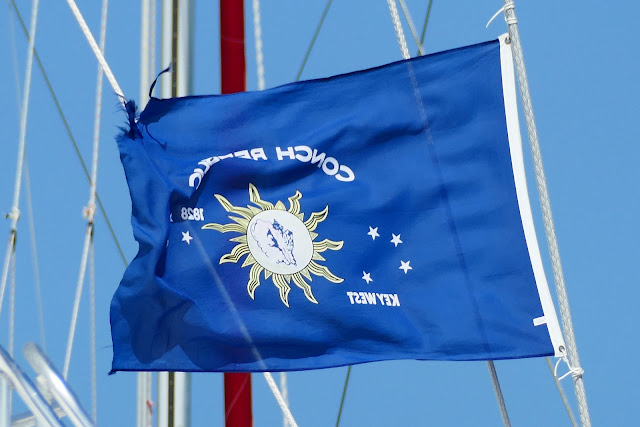 Boaters of all sorts tie up here, charter boats, pleasure boats big and small and they are all part of the tourist industry, the colorful waterfront scene in downtown Key West. Because it is a tourist draw the city changed the name to Historic Seaport as calling it The Bight was not descriptive enough. Besides most people don't know what a bight is, and even fewer care to find out. 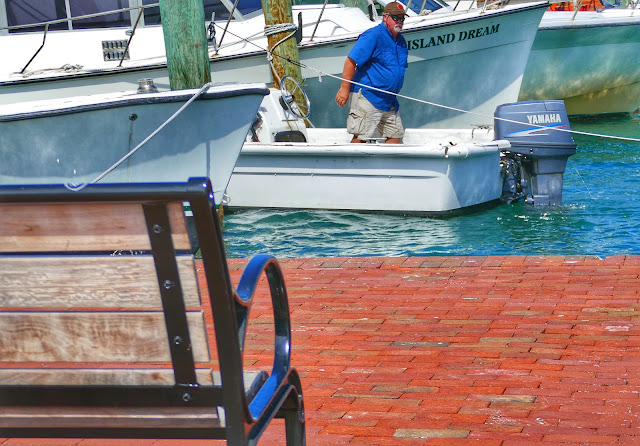 The city has retained ownership of the land around the Bight and rents the properties to hopeful businesses so you can buy the usual tourist tat and seafood meals before or  after you've finished a day on the water. 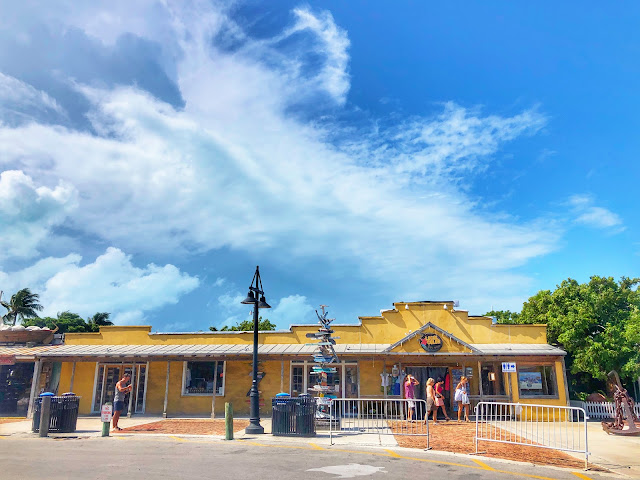 For me the Bight is a place where I can go and take some pictures with the hope that I can find some fresh angle on a  familiar scene. I like walking along the waterfront, I like smell of the sea air and the familiar noises of boats in the water. 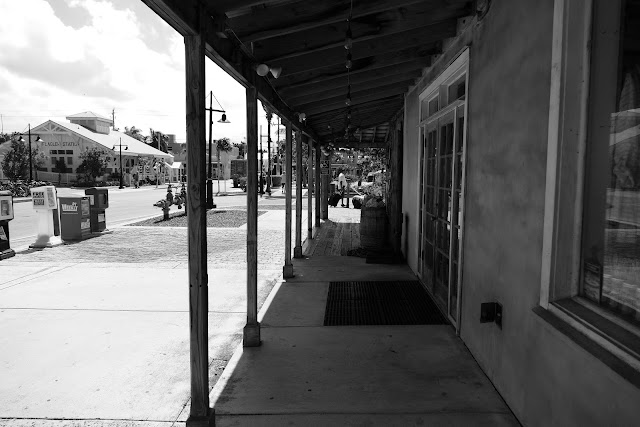 And the landmarks on land. The visitors attach their stickers for a piece of immortality; I take pictures to remind myself I was there. 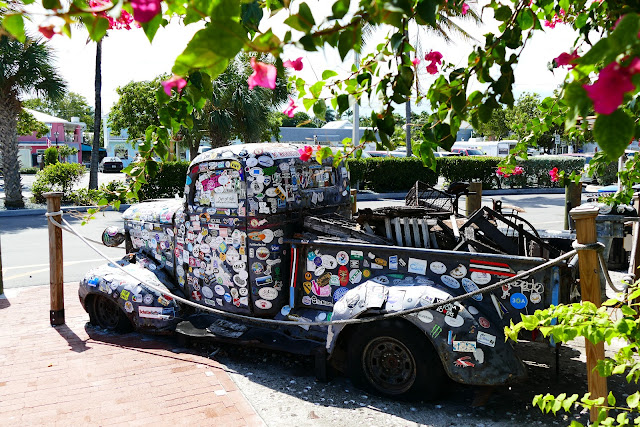 The ever popular Cuban Coffee Queen at the original location at the Bight.  There are barely a couple of places to sit yet they attract a loyal and continuous clientele, lined up outside the tiny little booth. 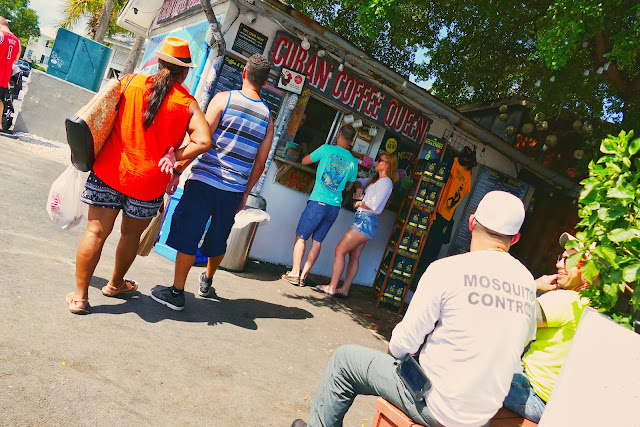 For the hard(er) stuff there's Schooner Wharf Bar often mispronounced as Schooner's Wharf. In any event it's another long standing popular joint. 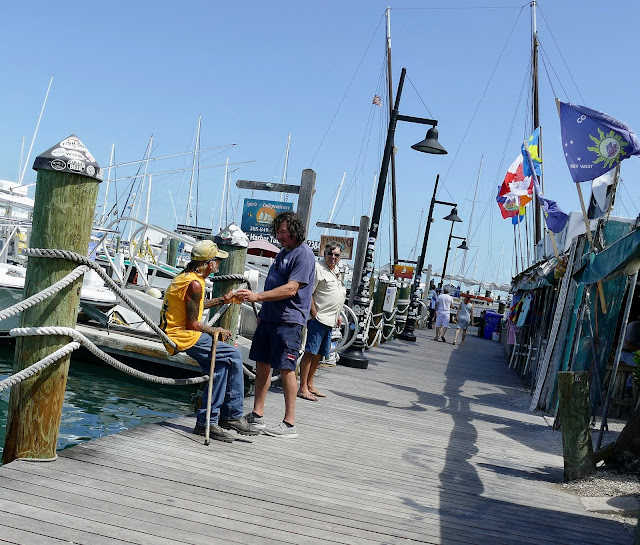 The towel left behind on the dock...next to the steps...no swimmer in sight... 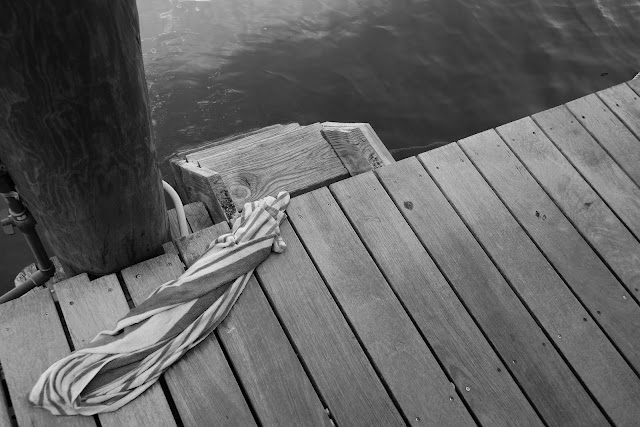 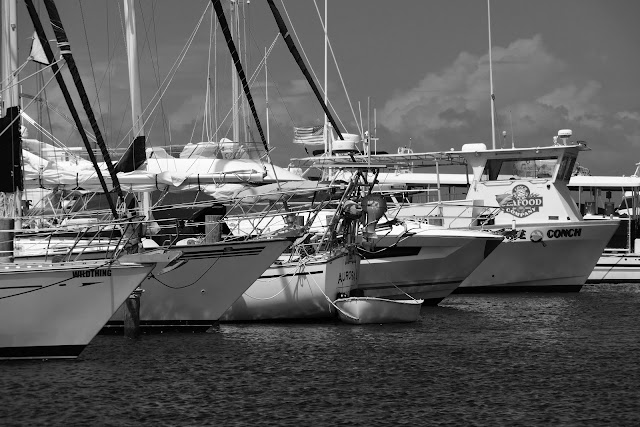 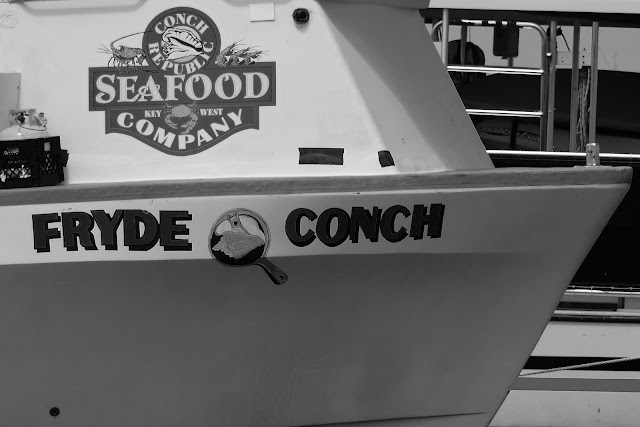 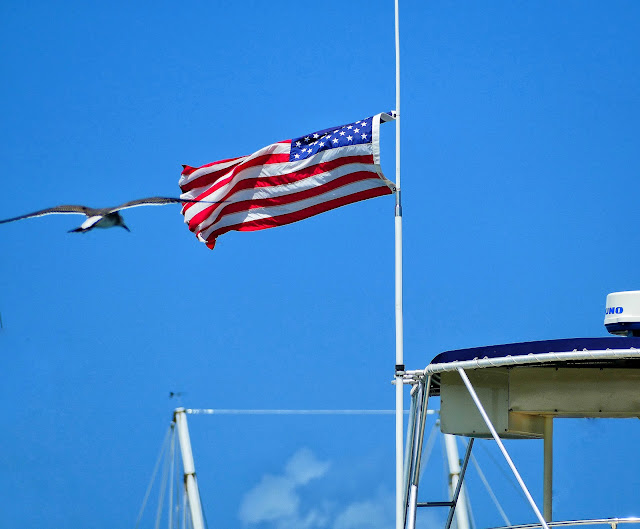 The entrance to the bight  is to the right of the dinghy coming to the dock, below. You can see the wind whipped water of the harbor in the background, beyond the seawall hat keeps these waters flat. 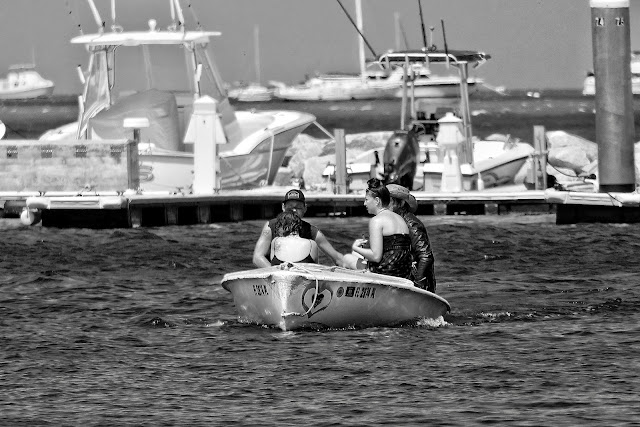 I caught a glimpse of this boat with smoke streaming from the tuna tower. Except it was a cloud. 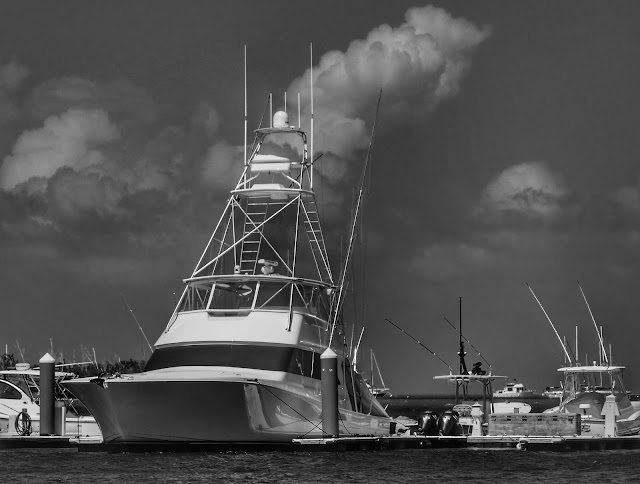 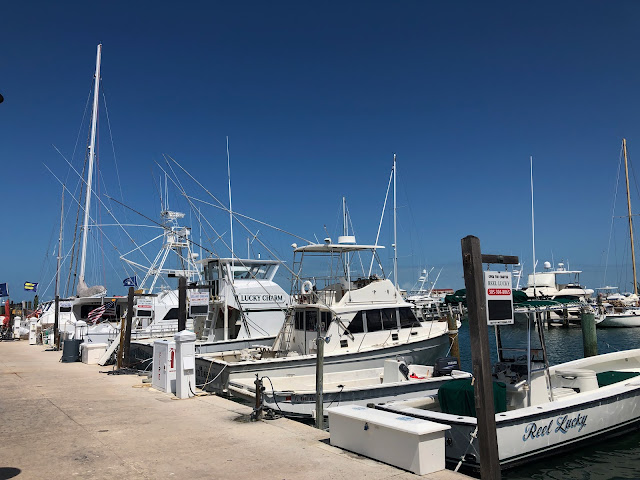 This must be where the Coffee Queen sandwiches are consumed: 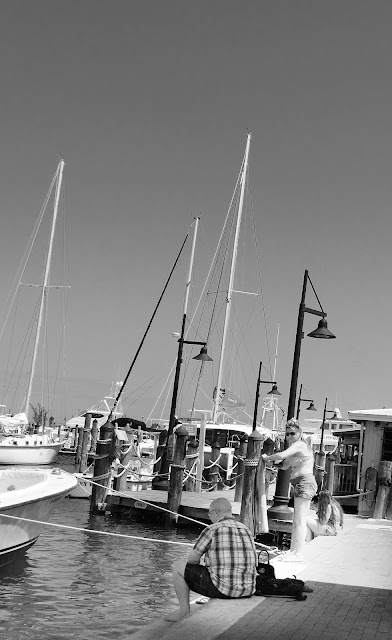 Like I said there are opportunities  to take pictures, and yes, it's a bird on a post but it's what I see around the waterfront and I like it. 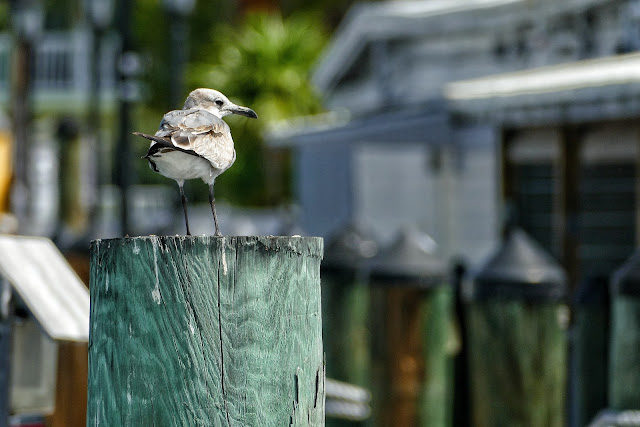 Facing the rough waters to get home: 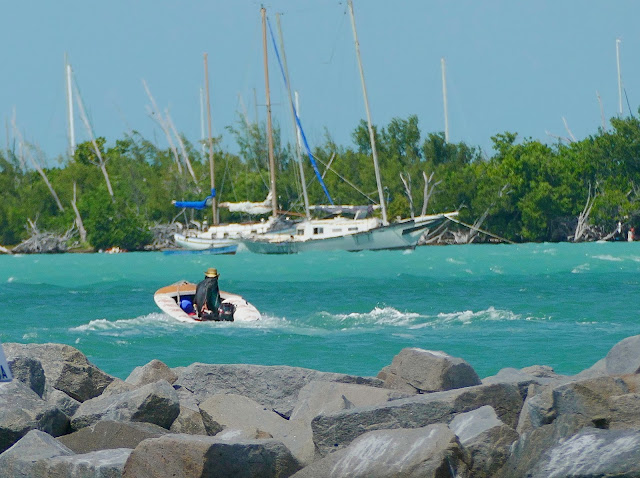 A nice big dinghy for a nice big passenger. Rusty would never do this and enjoy it. Anything bigger than a puddle and he is suspicious of water.  Hence the van and not a boat. 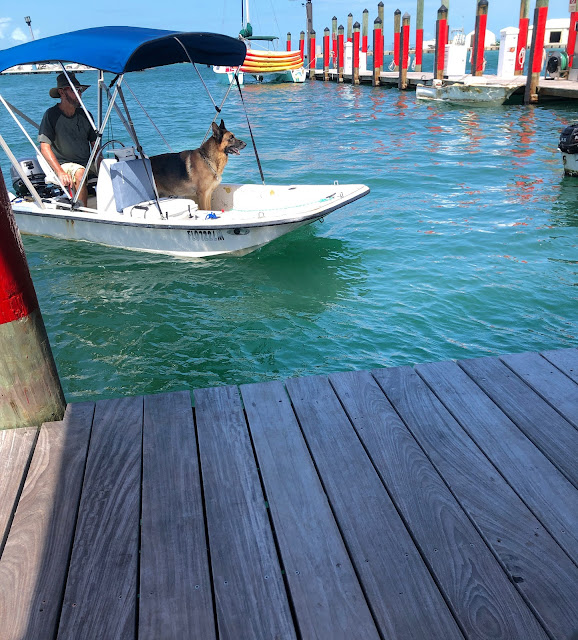 And this being a small town I noticed that lovely dog enjoying being ashore a little while later.  They look happy together. 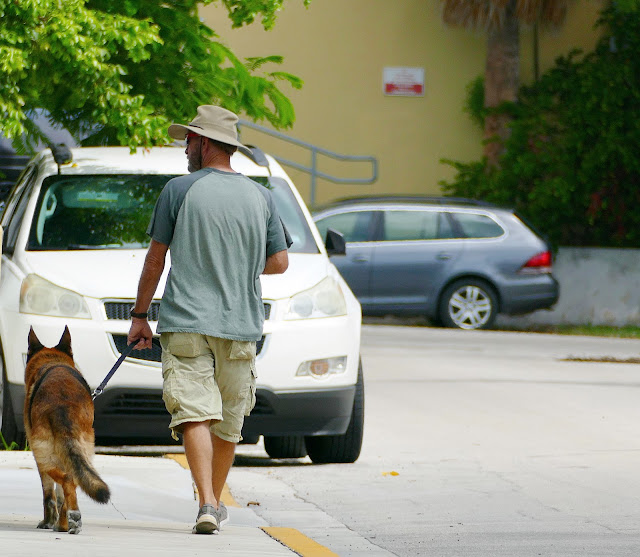 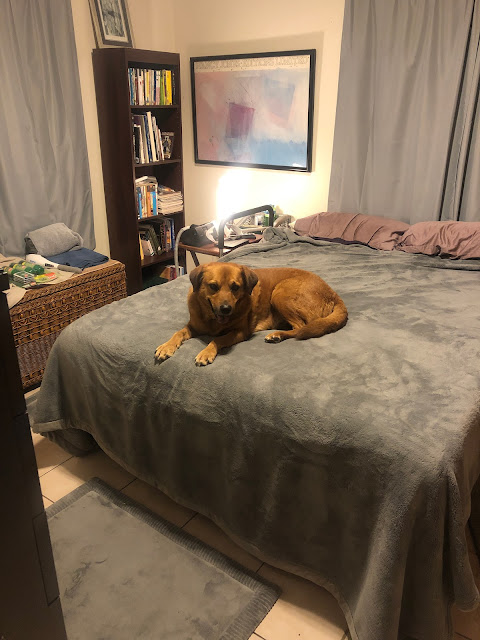