I woke to the sound of heavy snoring. Cheyenne was on the trundle bed which she had appropriated for herself and I could hear a sound like thunder as she sucked in air through her snout, rolled it round her rib cage and held it for a second. Then she let the air out like a balloon through her thick flappy lips with a sound like a truck rolling through a puddle. Then she started again, a deep gasp, a rumble and a wet rubbery sound of her lips wobbling. She was tired. I was merciless and rousted my dg for her morning walk. The good news was that we were a few thousand feet up in the mountains of Western North Carolina and as a result the morning temperature wasn't going to shoot up to 90 degrees as soon as the sun appeared. Around here we'd be lucky to see 65 degrees on this overcast morning threatening rain. A dog walk was in order. 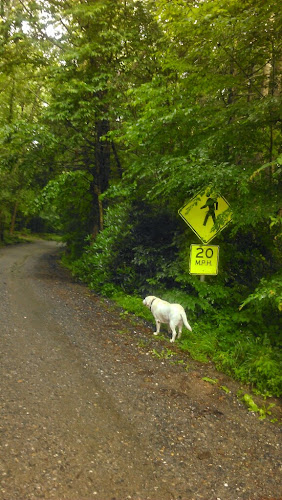 Cheyenne puts up with being in the car. I have noticed she likes to be able to look out and see the world, so lying on the back sat of the car doesn't do for her where her view is blocked by the door. Nevertheless she puts up with it, in sure and certain hope of better things to come. In this case two days of lounging on her bed on the back seat with the air conditioning turned low enough to silence her panting, brought princess to the wilds of my sister in law's home outside Asheville. 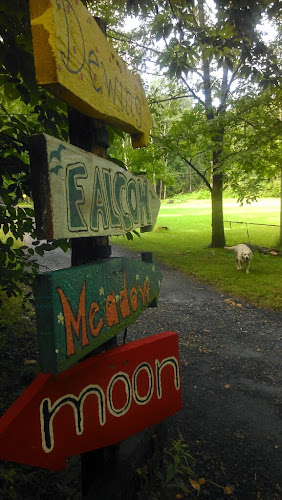 Cheyenne was ready for her walk and Celo, a private community of back to the land urban farmers and renegade hippies from the 60s, is perfect country for dog walking. Celo is the ideal many of us would like to live in, were it not for the communal land ownership and governance by consensus and community chores and so forth. A small price to pay you might argue to learn true appreciation for the bounty of the land, a quiet rural life with no fear of your neighbors who are in point if fact are your friends and your support. The apocalyptic types who predict a sudden end to civilization as we know it could learn a lesson or two from this unarmed intentional community as they call it. Children run free here and so do, it turns out, well behaved dogs. Strangers are greeted with a wave, not shot. 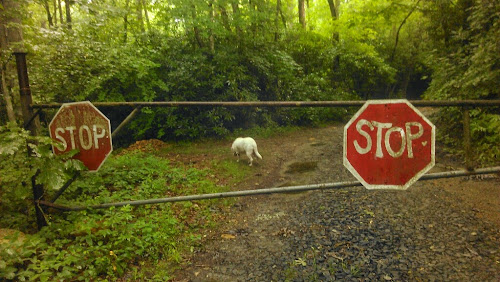 Because it is a community, Celo (named for the Italian word cielo which means 'heaven' and around here is pronounced see-low) has an abundance of signs which as usual tend to tickle my funny bone. Above we have a standard road sign marking the limits of the private property of the community, here rendered in a slightly altered state, as though on acid. Below an important warning sign on rain resistant cardboard held up in scholarly fashion by paper clips, a touch of academia in the woods... 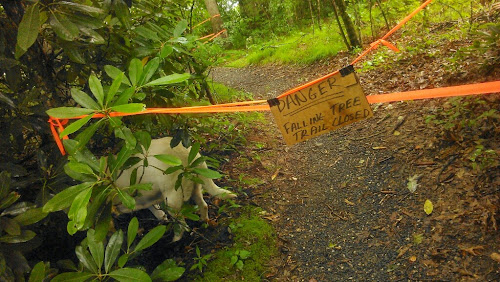 It did not as I recall take a great deal of discussion but the community voted unanimously, as it must in a consensus run organization, to outlaw deer hunting on the communal land. That was quite the move in rural North Carolina, a place where money is short and hunting is long and where people value their animal prey as food. The genteel paper signs are everywhere peeling and fading in polite support of this long held principle. No need of orange reflective vests here when out walking, thank you. 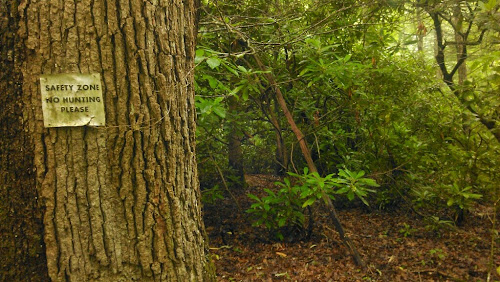 The crash of 2008 gave fresh impetus to a stagnant community and you can see evidence everywhere of the influx of fresh blood, younger families, people with energy and a desire to distance themselves as much as they can from mainstream life. They want their children to grow up playing and learning from the land, they want their homes to be appreciated as part of the landscape and they want work to be as meaningful as they can. People commute the hour to Asheville from here because they must but the ideal is always to live off the land and sI the land. It is old fashioned, idealistic and inspiring. 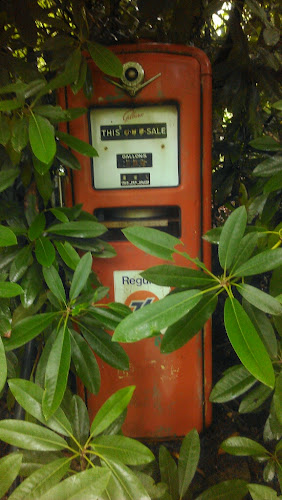 For one like me who grew up surrounded by farming and country living it has it's appeal as an escape pod from the flat heat of a tourist riddled summer in the Keys but it's not where I want to live. Nine months of the year it's cold or wet, summer is beautiful and fleeting and Celo is a long way from the mindless entertainment of the city. That my brother in law and his wife have made it their home base for decades is a tribute to their clear eyed vision as young college graduates. She became a general practitioner in a small rural health clinic in Appalachia while he raised their boys. Then he Went to school to teach up near Canada whe winters were bleak and the money they both earned put their boys through college. Now they are home and retired and travel as the mood takes them and where she works from time to time as a locus - a substitute doctor - for vacationing physicians. 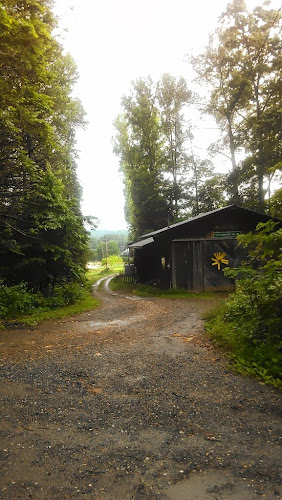 Cheyeen's tail was wagging wildly when we got her out of he car. Dogs have better memories than humans tend to attribute to them and she knew where she was. Walking here is a matter of picking a trail and letting your body wander in sync with your mind. The roads are unpaved in the community and behind any rhodendron bush could lurk a house, in Hansel and Gretel style, or a parked car at the head of an almost invisible trail leading to said house. 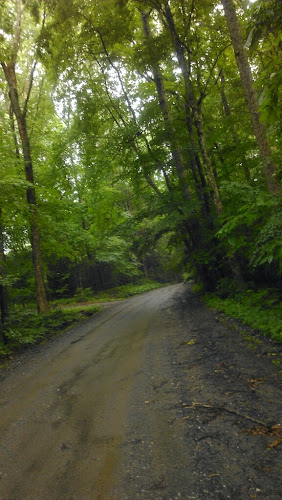 The community has a school, dedicated to the memory of Arthur Morgan where children are raised more than simply educated, on Quaker principles. Arthur Morgan School :: A Progressive North Carolina Boarding School with Quaker Values and Montessori Philosophy The school was out of course and this is the time of year young people tend Camp Celo further up the road which would be in my estimation an idyllic Tom Sawyer summer were summer weather to prevail. Days under canvas in pouring relentless rain revealed clumps of damp small people huddled by the side of the road as we lucky adults drove out of the flooded country in search of the city fleshpots. More on that later. 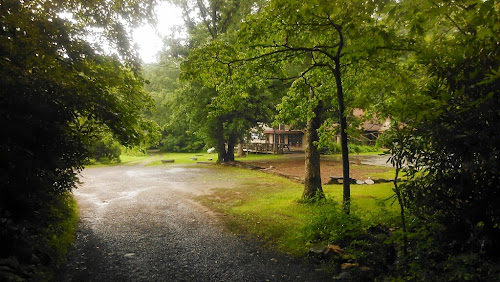 Cheyenne was, as you might imagine, delighted to chase down the labyrinth of trails wandering apparently at random through the woods. She cast off her summer Florida hibernation and reverted to being a frisky puppy once again. Her nose was down and I have no idea if she was pursuing deer scent, possum scent, field mouse scent or neighboring dog scents. She made slow forward progress dodging back and forth across the trails I meandered as I kept an eye on her. 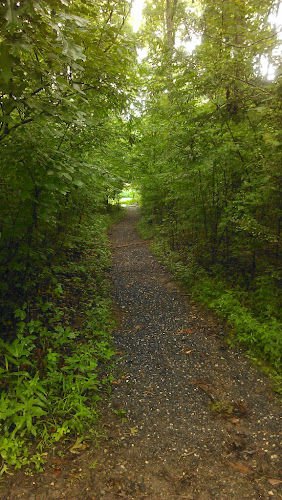 Water in Celo tastes excellent, both from the tap and apparently in puddles and streams. Cheyenne took advantage of it all. The small wooden bridges are in the Celo style, unobtrusive yet effective. 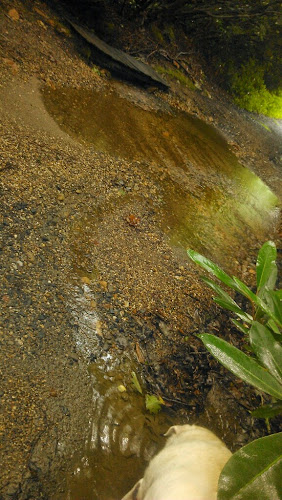 The woods are thick with trees and bushes and dead leaves, and easy to get lost in. I have managed the ignominious feat before now taking off for a walk and ebing up hours later in some upraised farmer's homestead well outside the boundaries of the community. My sister in law advises a taking off for a walk in the evening. They've had guests obliged to spend an uncomfortable night among the tree trunks, lost and exhausted. 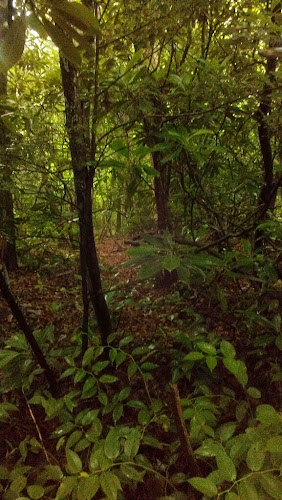 The heavy rain this year has produced thick greenery everywhere, and wet middy roads. Cheyenne was entirely content and I set aside my desire for a hot dry dusty summer. 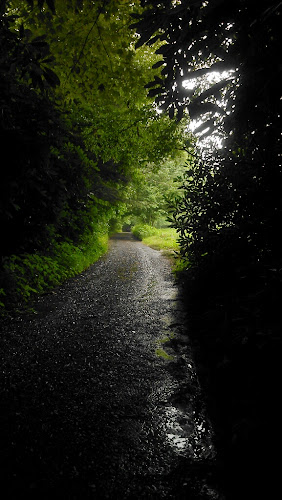 They call these little valleys and indentations in the mountains "coves" in Appalachia and looking up out of the tree cover the prospect of more rain is obvious. 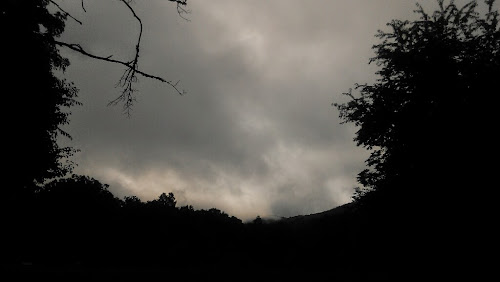 It is a fabulous change from walking the streets and back country of the Florida Keys. 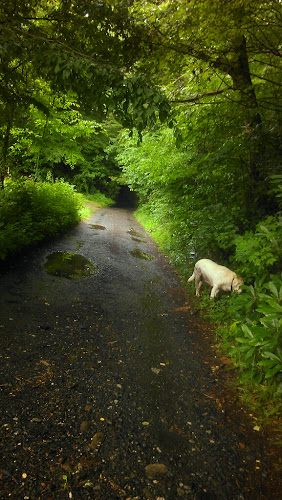 Wisps of louds hanging on the hilltops. Celo is located in the shadow of Mt Mitchell, the highest point on the eastern seaboard, Key West Diary: Mount Mitchell . 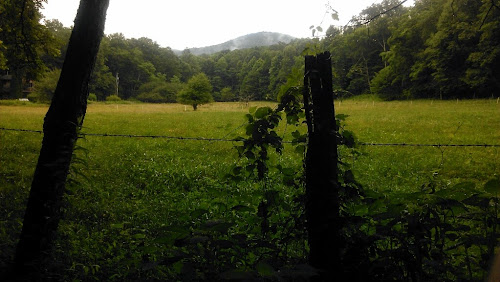 Imagine getting lost at nightfall out here. It doesn't bear thinking about, the boogy man would be bound to get you. 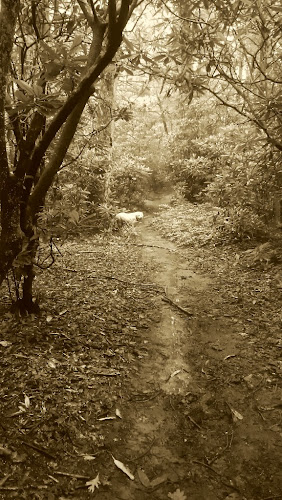 There is beauty here too, and I have no doubt by the time I got back to Florida the sun was out and mushrooms were pushing up everywhere. My sister in law can identify the edible ones and I love mushrooms fried in olive oil with garlic. 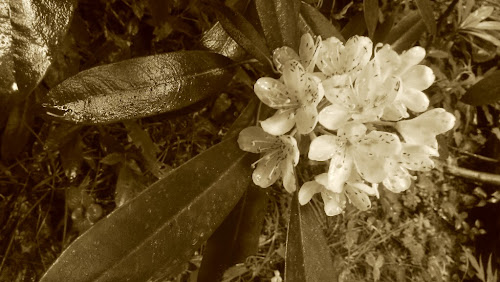 Cheyenne found a watery ditch so she was as happy as a pig in muck. 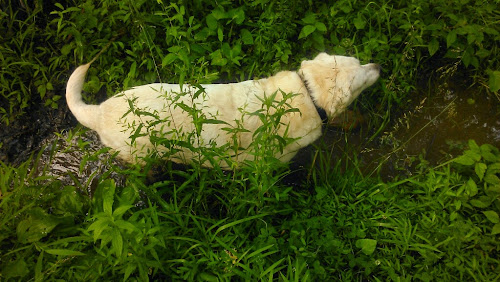 Rain or no rain it's a good vacation when your dog is happy.