Del Rio Texas reminds me of Key West. Which on the face of it makes no sense at all, a desert town filled with spiky plants and dust, on the border with Mexico and loaded with 35,000 residents. What about this place could possibly resemble Key West? Let's see... 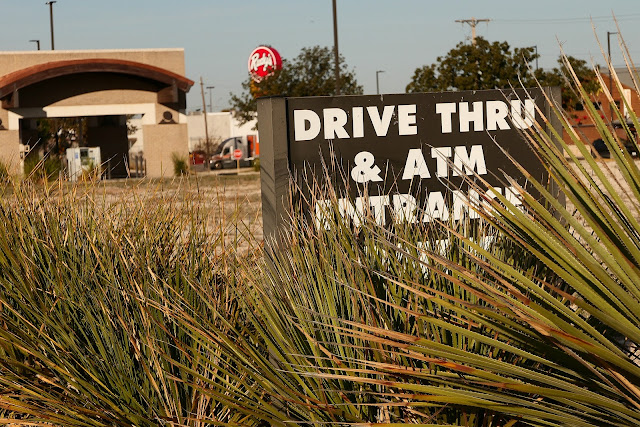 First: Del Rio is 150 miles from San Antonio, a long dreary drive, far drearier than the Overseas Highway actually because in the Keys you have  a slow drive but one filled with spectacular views while a driving escape from Del Rio is truly a desert experience. 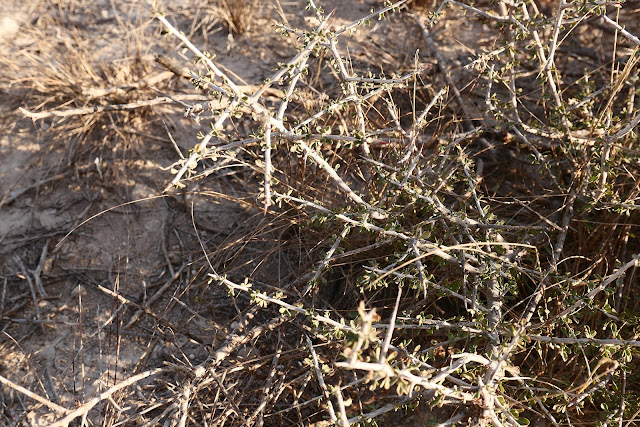 So Del Rio is isolated. It is sustained by the US Air Force which has been training pilots at Lauchlin AFB since World War Two, just as pilots train at Boca Chica AFB. 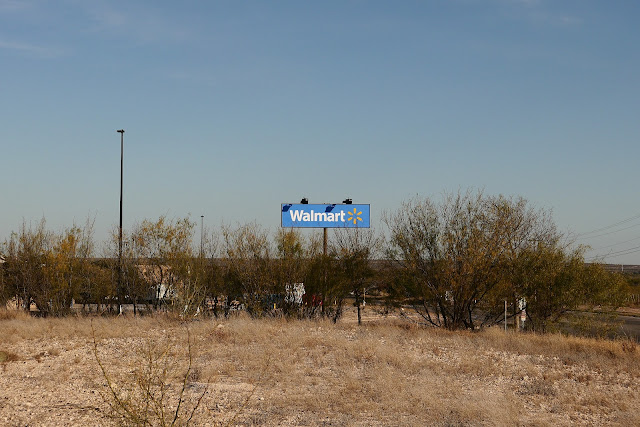 Del Rio has two Walmarts where Key West famously is closer to Cuba than to Walmart. Del Rio is a frontier town just like Key West, and yet just like Key West you wouldn't know it. Indeed Key West makes more of its tenuous connection to Cuba, the Forbidden Isle, than Del Rio makes of its close connection to Ciudad Acuña, a city of a quarter of a million inhabitants. Drive across the bridge to Mexico and car repairs, tooth repairs and eyeglasses cost a fraction of what they do in Texas. In Key West as we all know everything costs more by virtue of ...it being Key West. 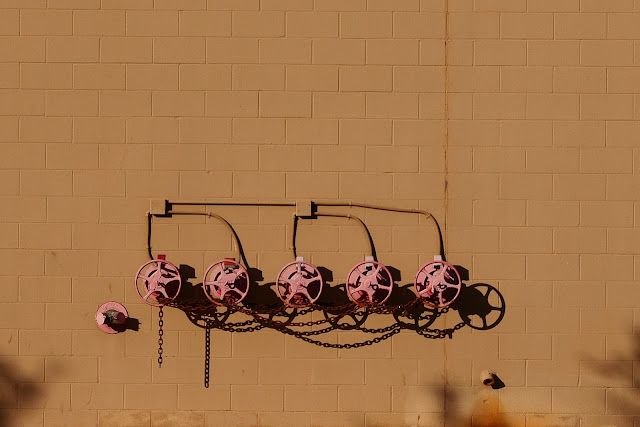 Del Rio is not a tourist town though it does boast of having once won the title for "friendliest border town." If they have a Tourist Development Council I saw no evidence for one. A neighbor in the campground asked if there were any boat rental opportunities on Lake Amistad. No idea is all I can say to that. I never saw one thing advertised as a tourist attraction or activity. Perhaps I wasn't looking. 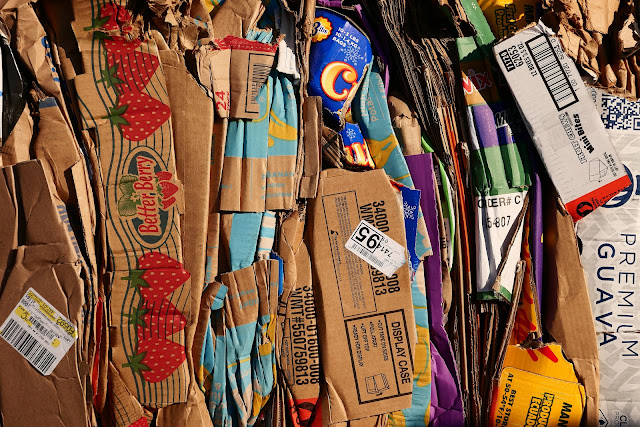 Del Rio has every facility a traveler could want and campers who have shopped at the HEB grocery say it is as good as any they have seen. Car washes? Mechanics? Car dealers? Restaurants? Every national chain you have heard of is lined up on Highway 90 into Del Rio, far in excess of anything Key West can offer on North Roosevelt Boulevard. 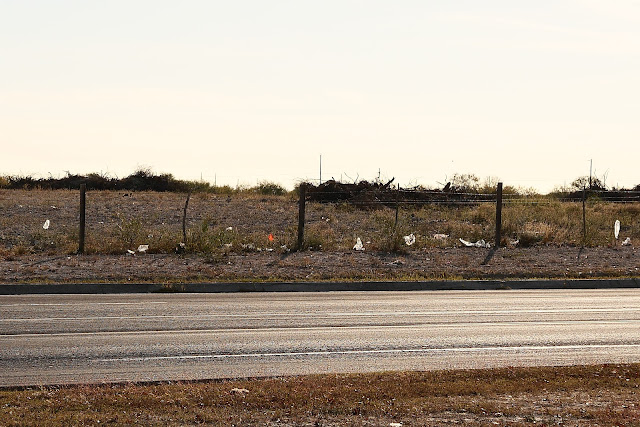 The sprawl of name brand box stores and fast food restaurants lines a five lane highway, two lanes in each direction and a turn lane in the middle and it goes for miles. It is overwhelming. 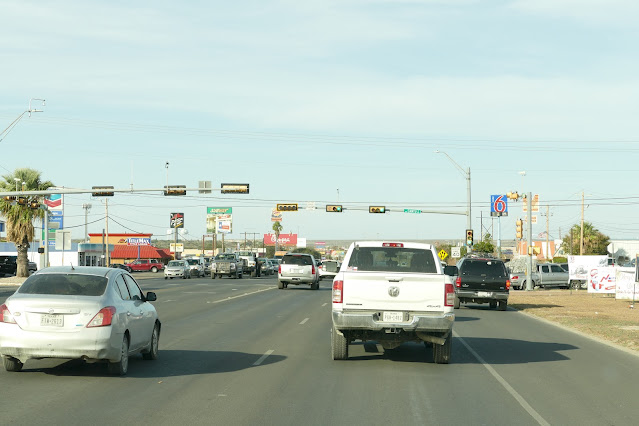 Del Rio, as one frequent visitor put it to me is a government town. There are more than 5,000 military here that help run the base to train pilots. Border control is obviously a huge issue and even though we haven't seen any there must be agents all over the place. Tourists come by but they aren't a mainstay. 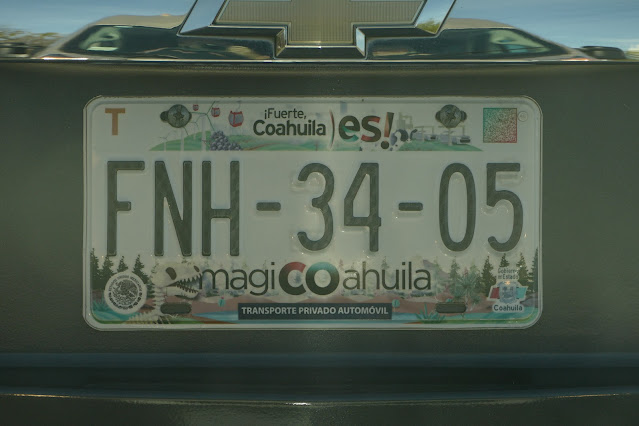 I have no idea what Del Rio's relationship with Ciudad Acuña is across the river but on the face of it, it is peculiar. There are no signs to Mexico, not one single sign I could see anywhere mentioning the Other Side. I knew where to go thanks to Google which I asked to direct me to the "Port of Entry - Del Rio" so I followed the blue line through deteriorating neighborhoods. "Isn't it weird" Layne said as we approached the entrance to the bridge,"how every border crossing looks the same." And she's right, we've been through a few and they look like this: 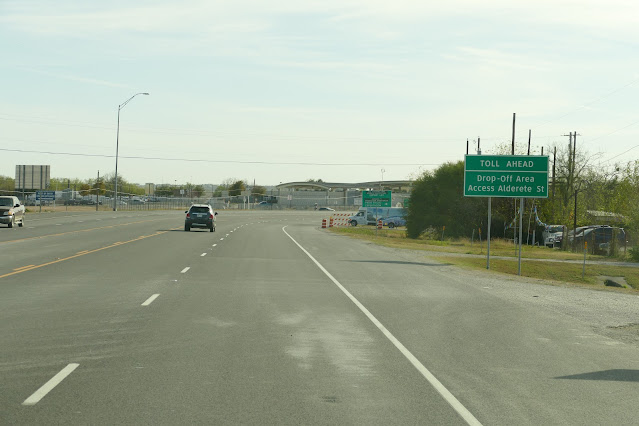 Except this one never once mentioned Mexico. Take a look. We turned off as we want to enter Mexico from Arizona after we stop in Tucson next week. 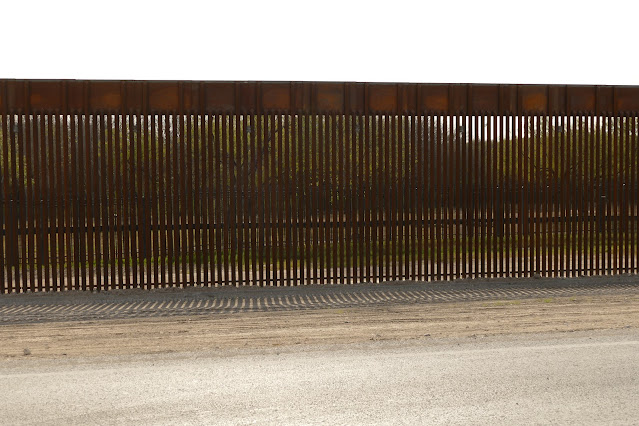 We drove the wall for a while, here set back from the border which runs through the middle of the river. We curved back into Del Rio and wondered why the other side seems so far away to us simple visitors. 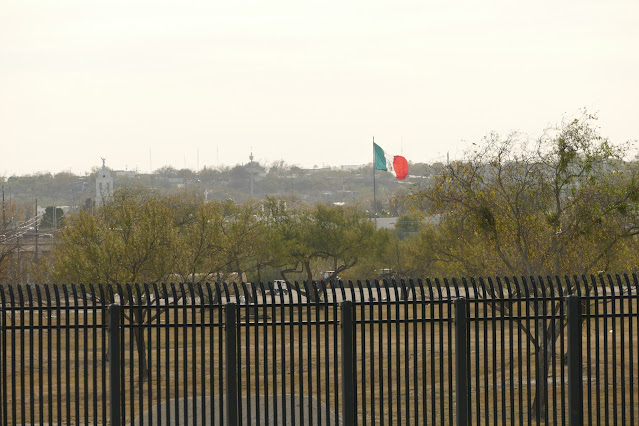 The city of Del Rio is more or less diamond shaped and the southern tip of the diamond touches the bridge. The broad part of the city is filled with residential streets, some not so wealthy. You don't have to cross the bridge to see poverty. We did see a brown street sign pointing to the historic downtown and there we parked and walked. I saw an old town filled with potential but still ticking along. The main drag was filled oddly with pawn shops and gyms, oddly paired with lovely old facades and curiously mid 20th century buildings. I don't know where they would find the money but of they did this city could really be brilliant. Some pictures: 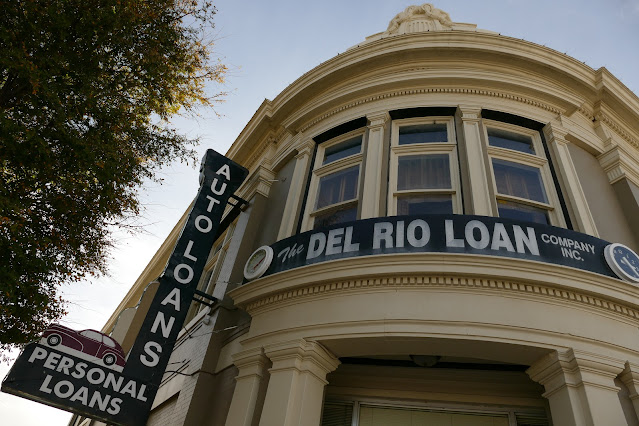 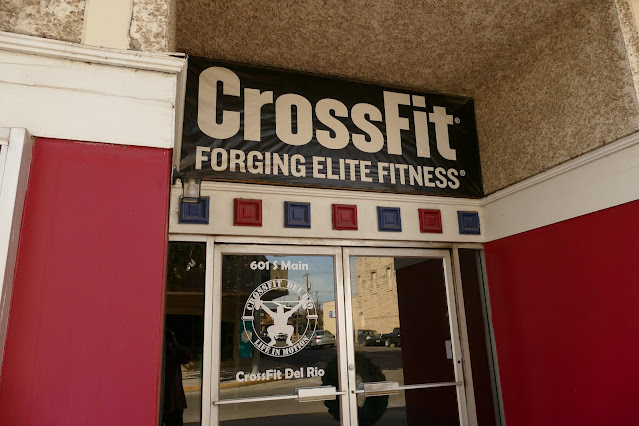 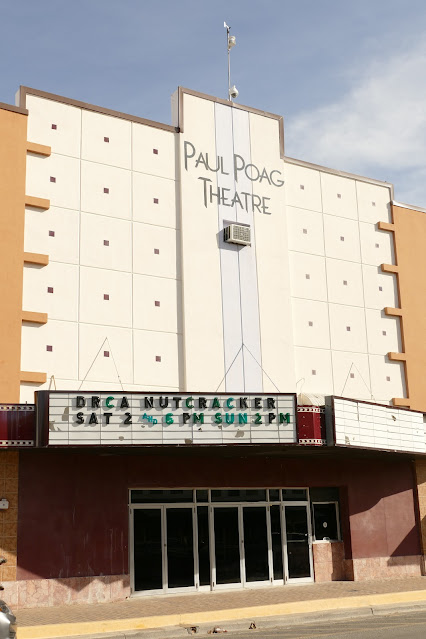 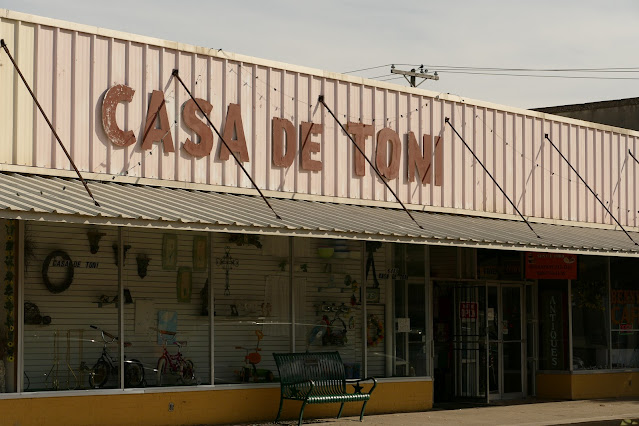 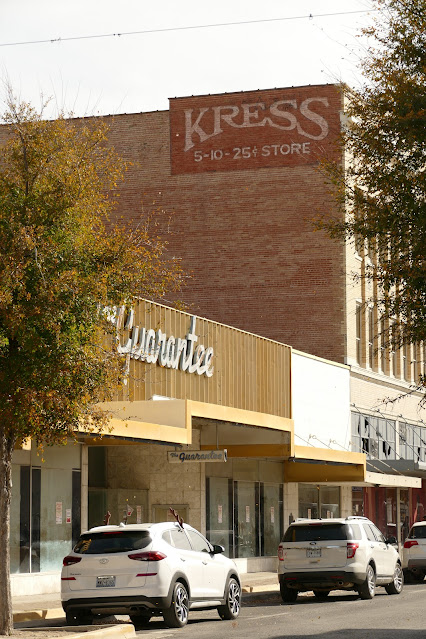 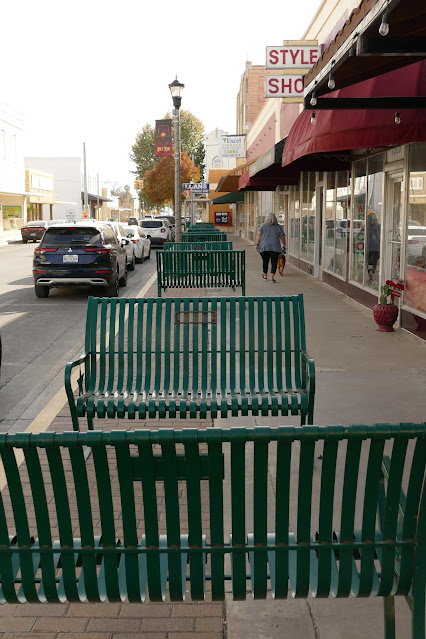 On May 3rd 1635 a group of Spanish missionaries arrived on the bank of a river and called their mission San Felipe Del Rio (St Philip of the River) as that date is the feast day of St Philip the Apostle. The locals took exception to the mission and destroyed it but the settlement persevered even into the absorption of this area into the Republic of Texas and eventually into the United States. 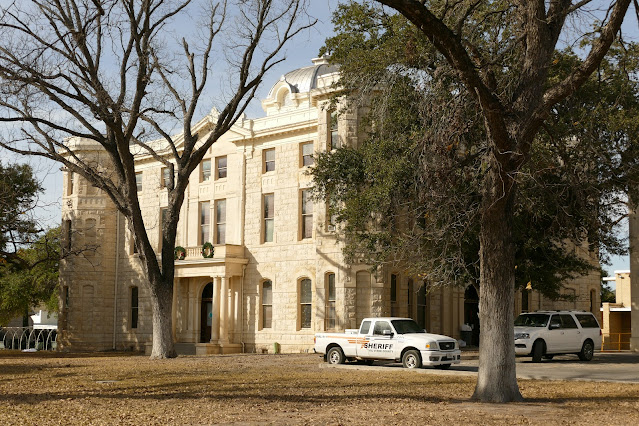 Val Verde County's seat was established in San Felipe Del Rio but the postal service in 1883 wanted to shorten the name to avoid confusion with another nearby town called San Felipe de Austin so it became Del Rio and so it has remained. Oddly enough I saw school buses driving around town labeled San Felipe Del Rio Consolidated Independent School District whose superintendent it turns out is called Carlos Rios. 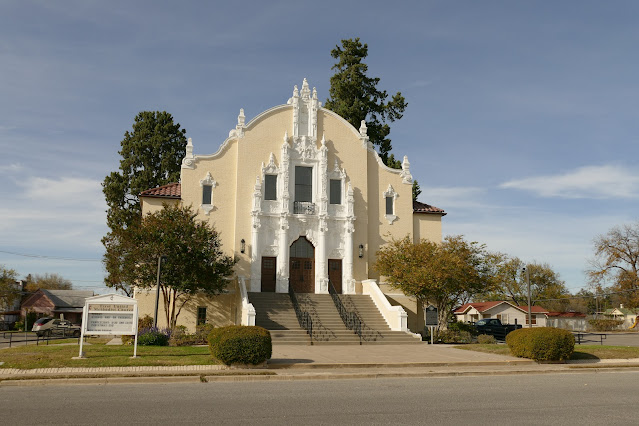 19th century Methodists got themselves a rather fancy church which I thought from a distance must be a Roman Catholic basilica (above), but it's not. The other church I noticed was the Lutheran pile down the street: 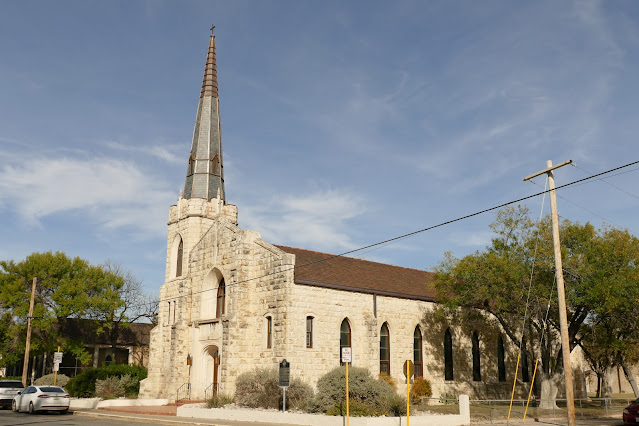 These impressive structures hint at the importance of this little town in decades past. Interesting the historical marker barely visible above down't talk about the church but about the man who came from Italy to build stone structures in the US. John Taini born near Brescia in 1854 was recruited to work in New York, then he worked with the railroads and finally with the US army in Texas where he ended up in Del Rio which had a sizable Italian community. I joked with Layne how so many immigrants come and settle and leave their mark and here I am flitting about like a butterfly. His name is everywhere and he died a respected member of the town and appreciated contributor to its civic pride. 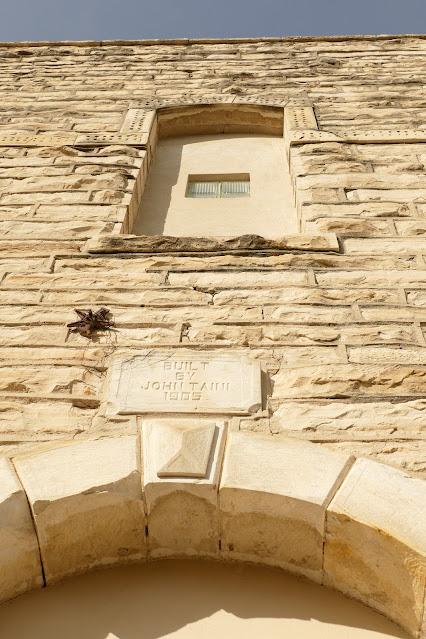 I came to Del Rio 40 years ago as I wanted to meander along the border on my Vespa as I explored the United States. I had never seen. first world and a third world country co-exist side by side and I wondered how that would be. I met the Sheriff of Del Rio at the time a man who opened my eyes to the difficulty of life along a border river. He told me of Mexicans who swam (or possibly waded!) across the big river -Rio Grande- and broke into his truck while he was fishing. He couldn't follow them across so he devised a cunning plan. He put a rattlesnake in box and left it in his truck. The box disappeared and no one messed with his truck after that he said. That story has stayed in my mind ever since but I was a callow youth and I remember nothing else of Del Rio. I crossed the border later at Presidio and rode my Vespa to Guadalajara to see a girl I'd met in Paris. A long and different story. Me on the Tropic of Cancer in Mexico 1981:

It's a healthy reminder that the world changes as time passes and the changes change us too. Back then I bumbled around looking and yet I'm not sure I saw, certainly not the way I do now. To be riding ina. van, to have time and to be wise enough to take time to look around keeps the 23 year old inside me alive. 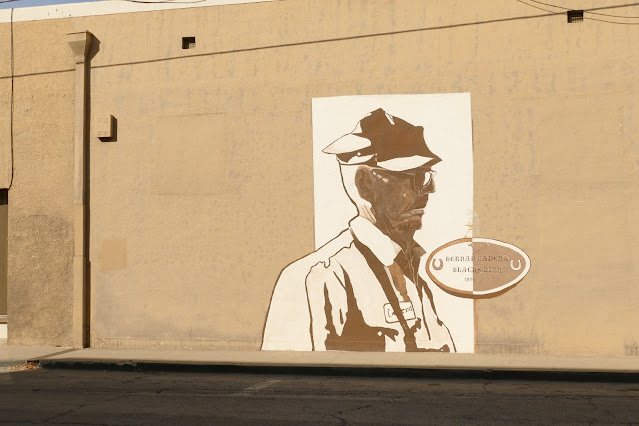 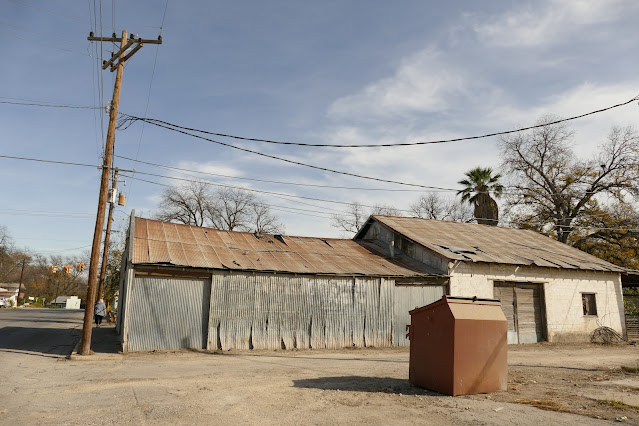 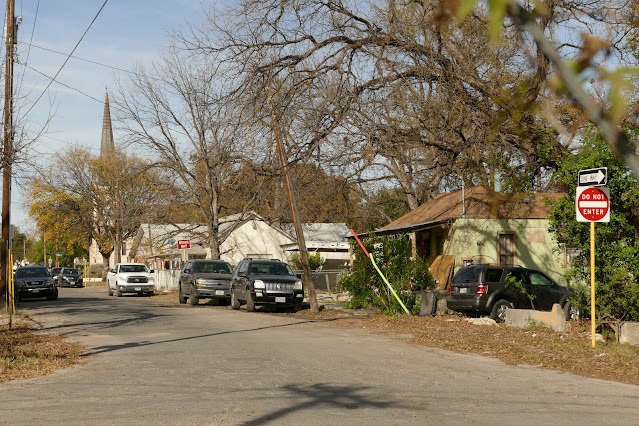 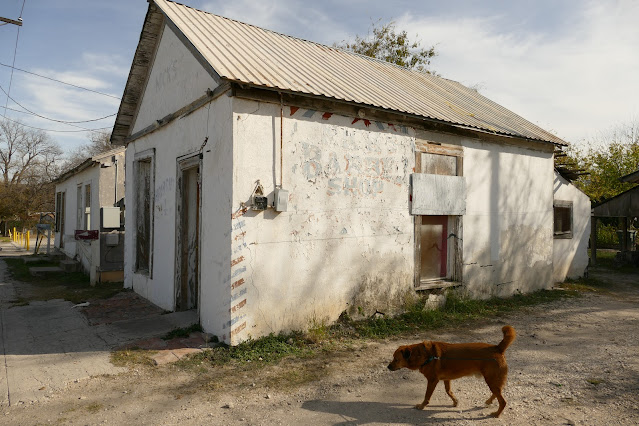 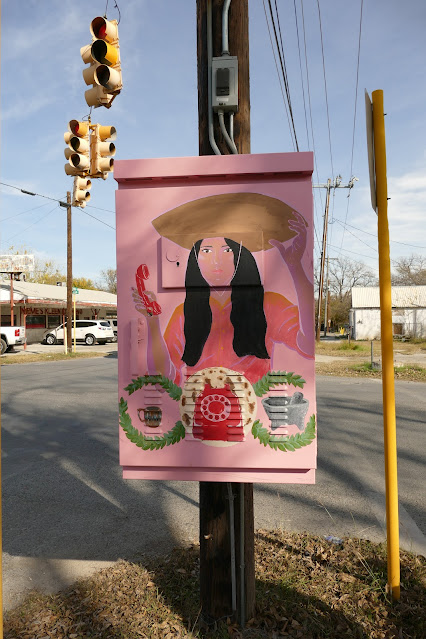 To walk with Layne and Rusty, to size things up and remember them, to share the memories later, all adds up to a richer and more firmly imprinted memory. I'd never have recalled Del Rio the way I see it now. But the curiosity that drove me in 1981 still drives me in 2021, and I am glad of that. And glad of them too. 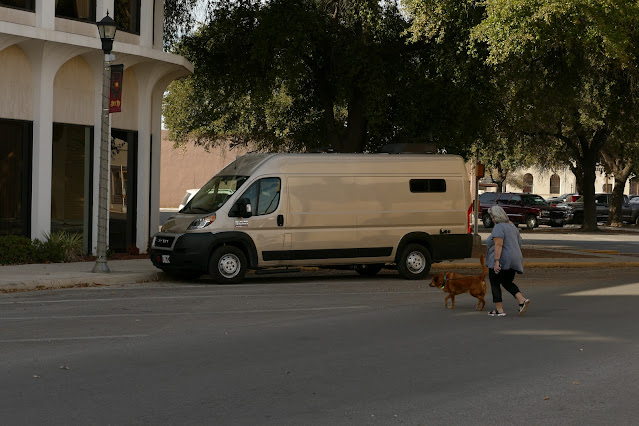 Gannet 2 is our home and last night as we sat down to dinner aboard (spicy mushroom and kimchi rice bowl with spinach)Layne looked at me and said:"Are you having fun?" and I realized I must be very bad at expressing myself because I don't think I've been happier in a long time. That I never have to go back to work, that only illness death or mechanical ruin stands between us and travel so unconstrained seems like an undeserved privilege. I intend to take full advantage of it. I hope you can get something of value from it. The world is here for you too.
Posted by Conchscooter at 1:00 AM 3 comments: