It is a fact of life in my world that every day pretty much starts with a dog walk, and if Rusty is impatient so much the worse, I go earlier. 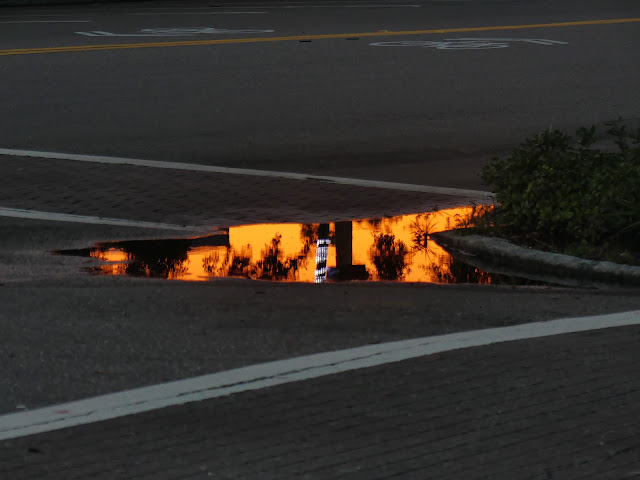 St Petersburg has alleys all across the city ideal for a curious dog. 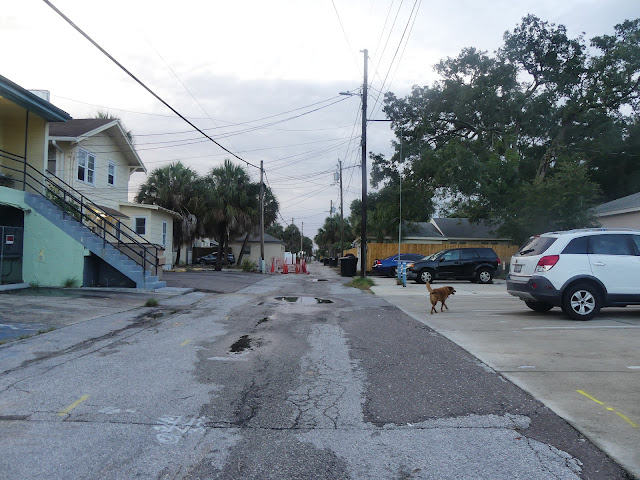 And the city deploys vast trash cans, big enough to hide a body or two. 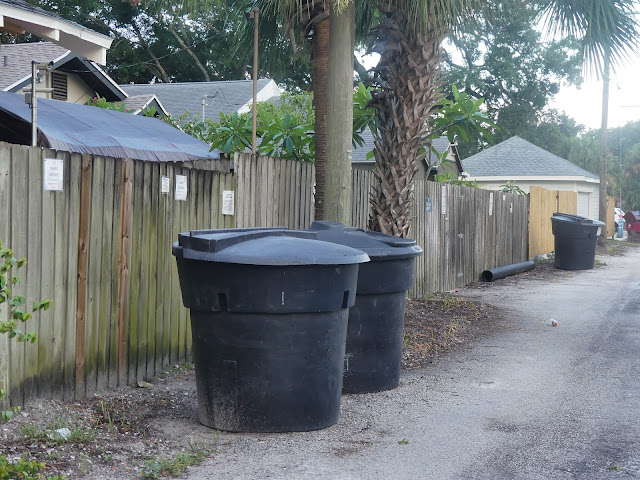 And it rained a fair bit while we were there. 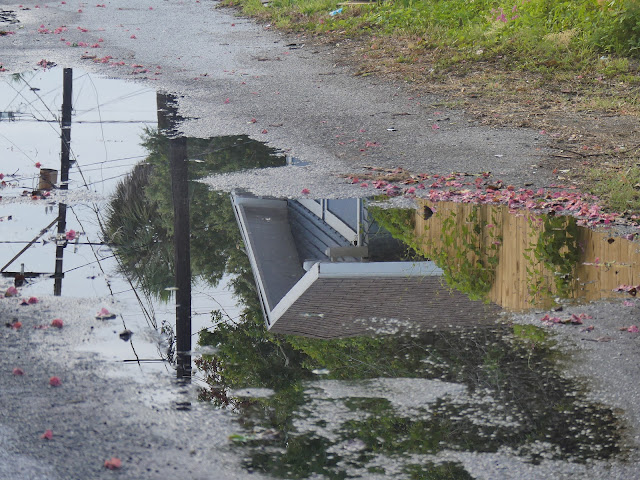 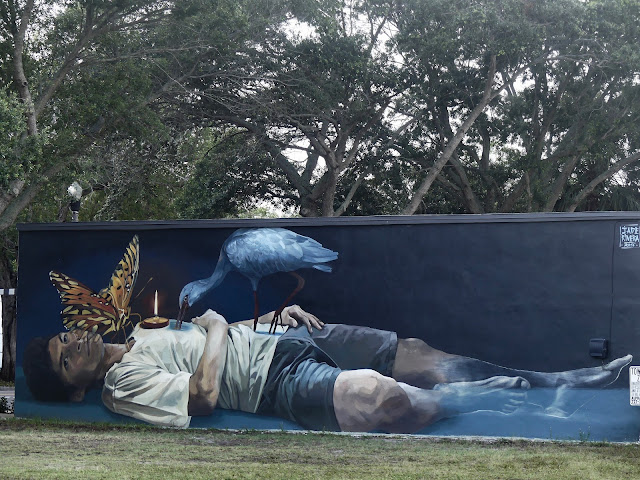 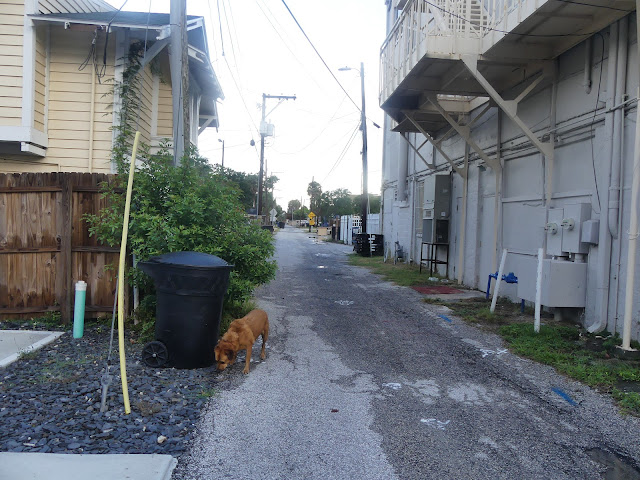 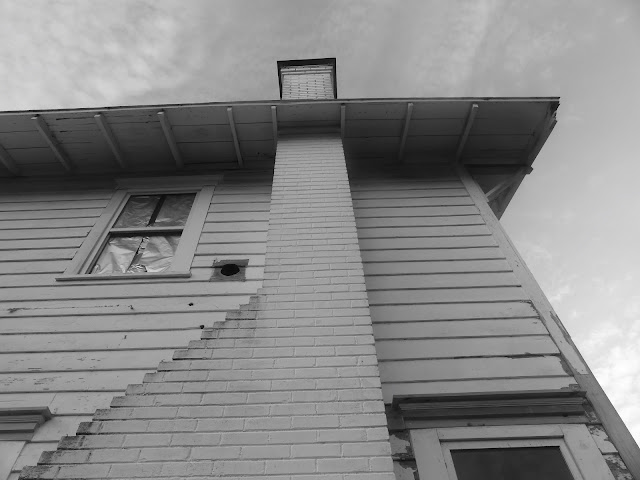 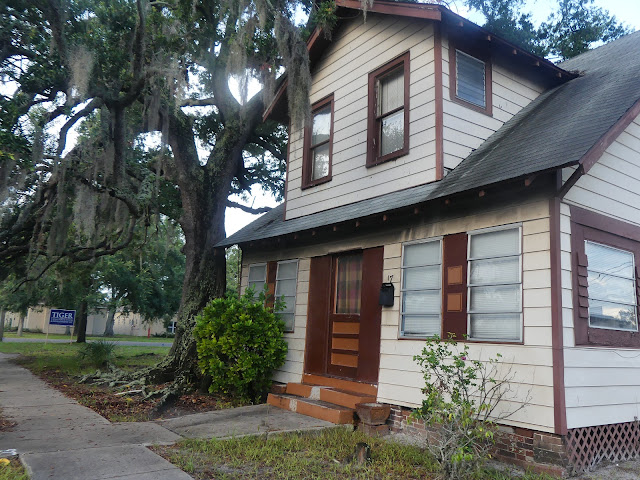 One mural struck me, which was representation of the building on the St Petersburg Pier as an apocalyptic alien. 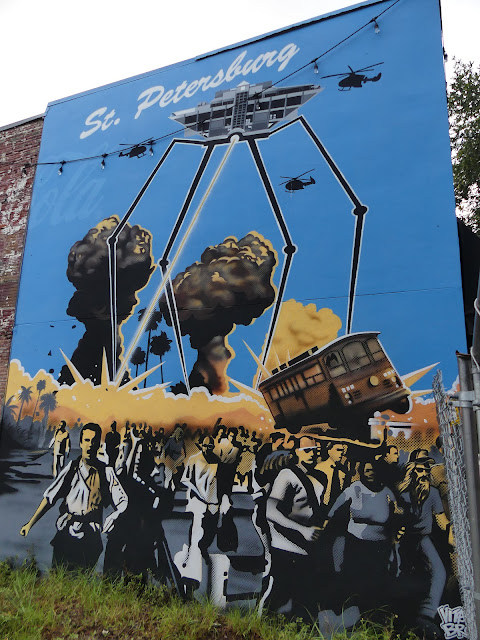 Which turned out not to be not so as they are apparently rebuilding what we used to call "The Martian Embassy." 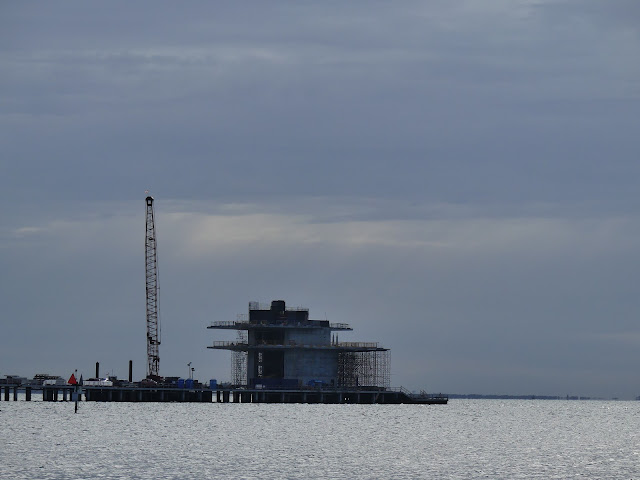 The Apollo Beach power station across Tampa Bay. I used to sail there for a weekend away when I lived on my boat at Demen's Landing where I took this picture. 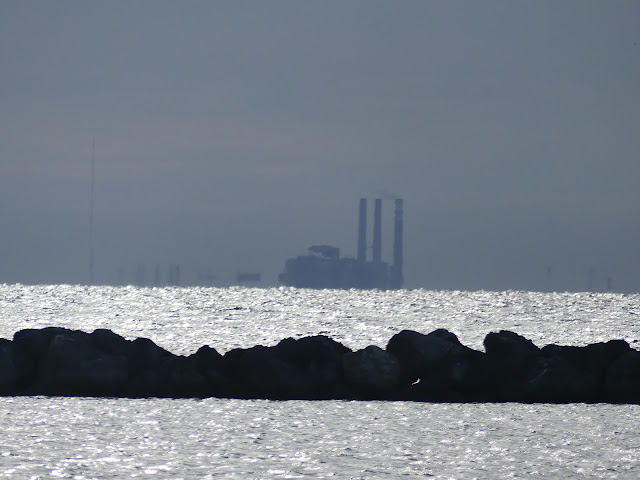 We were not alone but might as well have been. They were on a  mission. 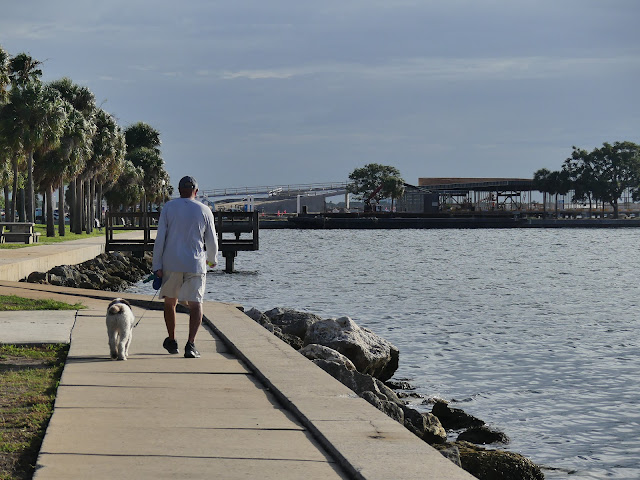 Demen's Landing is a pretty waterfront park and marina. I enjoyed living here before I sailed for the Bahamas and returned to Key West. 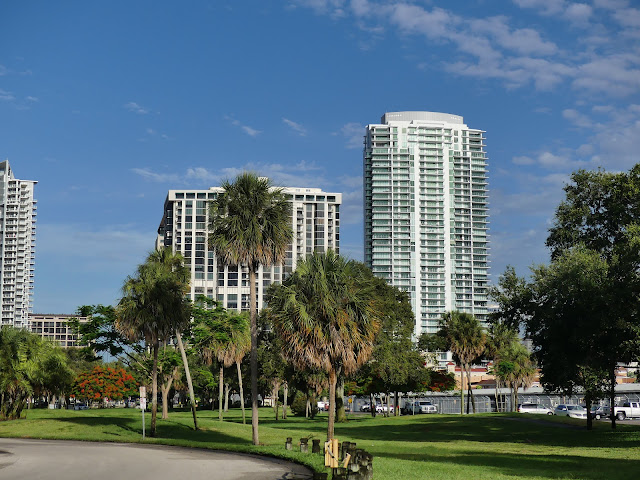 Our trip home was interrupted by a  few stops at RV dealers along the way. Retirement looms and we like to plan for the future which in our case will involve some travel and as we have a dog it won't be by boat. RVs take enormous amounts of research to figure out  and I have all sorts of anxiety looking at machines that move but contain all the paraphernalia for living. Even in a  20 foot camper van; it is quite astonishing how complex these machines are and it takes ages to figure out what feels right. Never mind paying for the thing. We found that moving onto a boat and traveling was made much easier by devoting time to getting used to the boat and actually using it and we plan to apply the same principle here. However I'm getting a headache figuring it out. 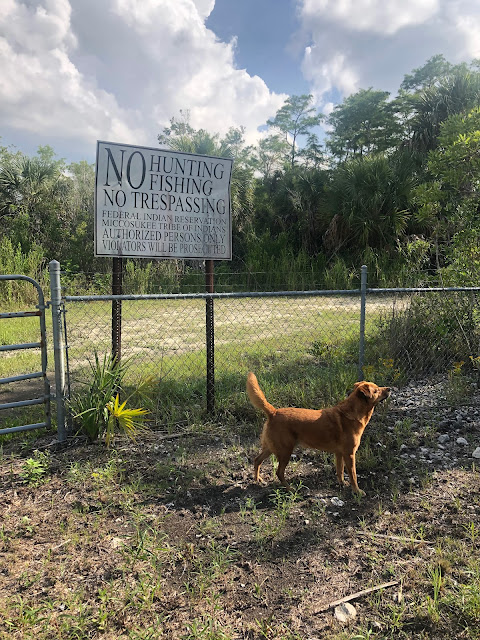 Spending time with RV salesmen was not a highlight but we found time to stop and walk the very patient hound along the way. I figure Rusty wll enjoy the walks when traveling but he is a homebody and he likes getting back to the house. I let him out of the car and he takes a turn around his domain checking whats been going on in his absence and only joins us later in the house. 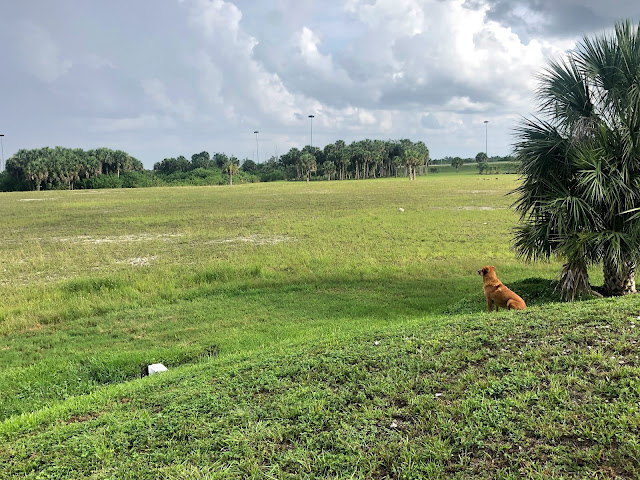 The Miccosukee gas station is usually a good spot for a walk along Alligator Alley in the middle of the state. Don't speed around here as the Tribal Police are fierce and always on patrol in this section of their land. They are also building some magnificent construction here. I caught a glimpse on a billboard of what appeared to be a ravishing resort. Or something, as the billboard flashed by and there is nothing I could find online about it. 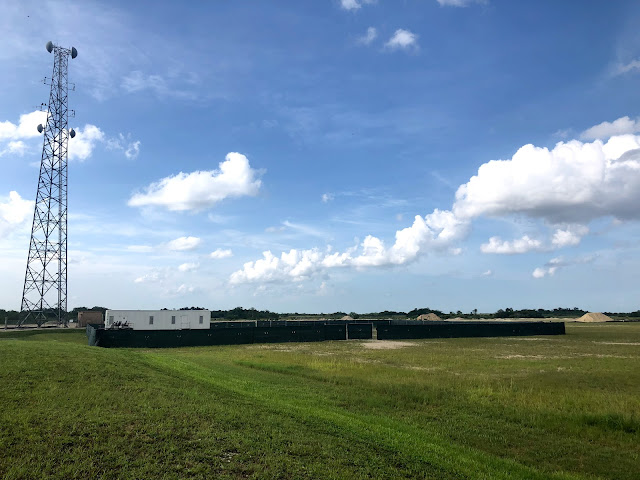 A useful stop but not brilliant in the middle of nowhere. 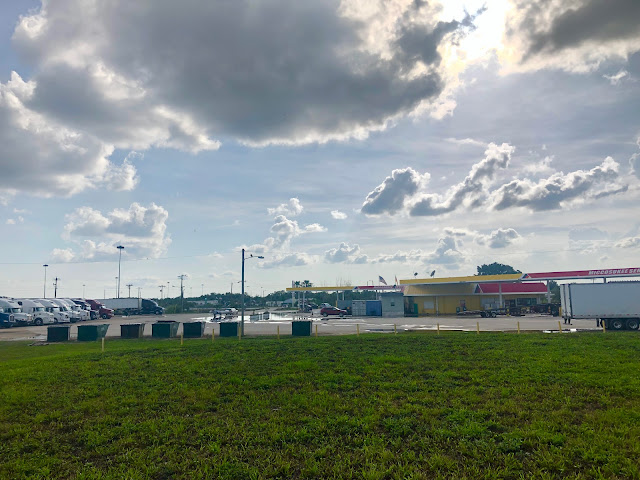 I've never seen pumps this decrepit but I hope they dispense as promised. 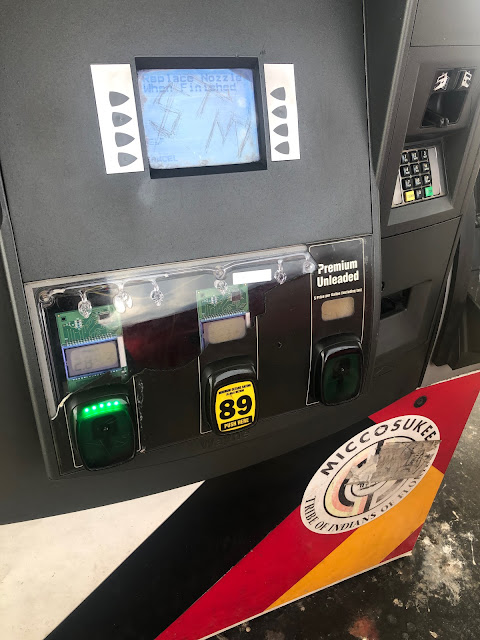