The Circle Of Life At Celo

This is the Hobbit house at the top of the hill where I stay when I come to visit Bob and Geeta (ghee-tah with a hard 'G'). That's because this is their home in the woods. As an alternative to the Florida Keys I can hardly think of a better place to spend time away from salt air, 911 calls and crowded sightseeing traffic on the Overseas Highway. 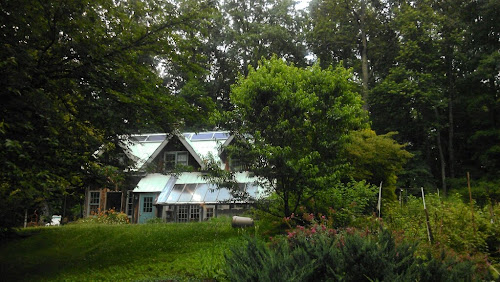 Geeta is my wife's sister, raised in Illinois and California but an Appalachian by inclination who walks the ridges of these mountains and still says, half to herself, she can't believe she gets to live here. She travels a lot, especially now the she is retired from general medical practice, but she continues in the vein she has lived where before she ran a rural medical clinic in these forgotten mountains (they were off the map in 1970) now she visits the cold frozen parts of India to bring medical care to forgotten mountain women in the Himalaya. 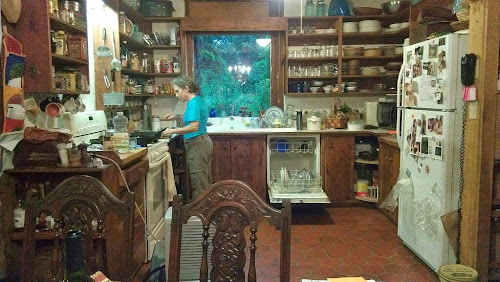 Bob from Alabama adopted the hippy creed decades ago and brought his wife to the mountains where he built a house and raised the family and still chops wood and grows vegetables and milks goats and trades food and ponders the mystery of how the planet can support billions more humans than it was designed for. I am pleased to say I have contributed nothing knowingly to the overcrowding but being human he enjoys his grandsons in Asheville who may or may not be the seven billionth and seven billion and first people on Earth. And yes we enjoy wine and local brews of one sort or another when we visit. 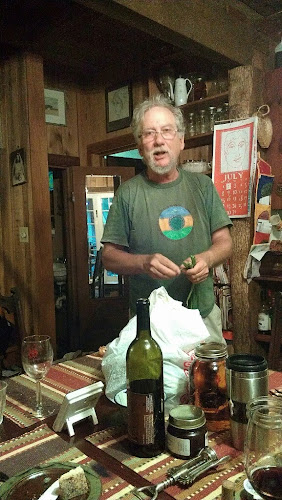 To build a house is beyond my comprehension, and then to live in it for the rest of your life, me who has spent a lifetime wandering, well that's beyond my ability to begin to fathom. Here they are on the door of the fridge, from 35 years ago: 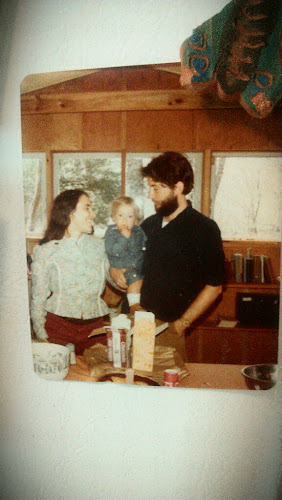 So for me a week in these surroundings can be a strain, as mountain people tend to be sociable folk, but it is a reminder that there are more ways to live than sitting under a palm sweating year round. 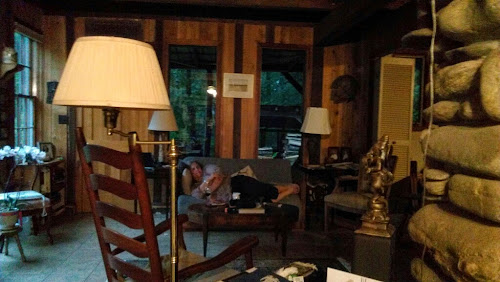 Cheyenne doesn't mind it at all, though the inside stairs to the guest bedroom are steep and winding so I make sure she comes down outside by way of a deck that has shallow steps and fewer of them as the houses built into the hill. She takes the time to sit on the deck and watch the full sized deer come out of the woods and graze the lawn. Celo community owns the land and when Bob and Geeta die the house would first be offered to their boys who will not want to live year round on an Appalachian mountain, most especially not the park ranger in Yosemite, but even the local son likes his solar home in urban Asheville too much to move. So then it will be offered to anyone on the waiting list for the community. and so the wheel of life goes round. Like many residents of the community bob and Geeta have had to make money away from Celo and thei boys have graduated college with no student debt and with jobs and wives and values inculcated by this strange peace loving world free of television, newspapers, cell phone signals and all too frequently for my taste, Internet. Aside from the fact that it snows in winter while summer, if you're lucky, lasts three months in the shadow of Mount Mitchell I would not want to live in a community where my neighbors get to vote on my admission to the club and then my house design and where collective decision making governs the community as a whole. It's not a gated community and the is nothing suburban about Celo but I am too iconoclastic to subsume myself into the collective as Bob and Geeta have done over the decades. 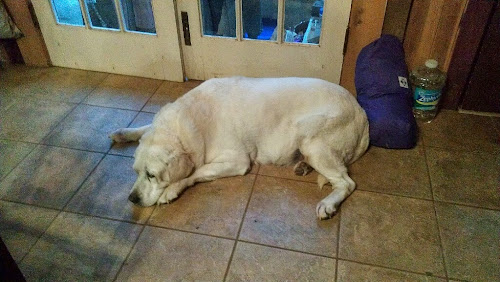 Time though is passing and I feel it when I go to Celo now. Geeta talked about what she and Bob will do when either or both of them can no longer drive, and what the survivor will do when the other dies (a retreat to Asheville to live with their local son seems the preferred solution) and she says there is talk of creating assisted living in the community. I'd not suggest taking any cues from Key West which cannot decide from one minute to the next how to deal with that issue. The community has become a success in response to the cracks we see in our civilized facade. Local food,locally grown, solar panels, rain water collection, shared transport, community help are all issues that seem less crackpot now than they did half a century ago. 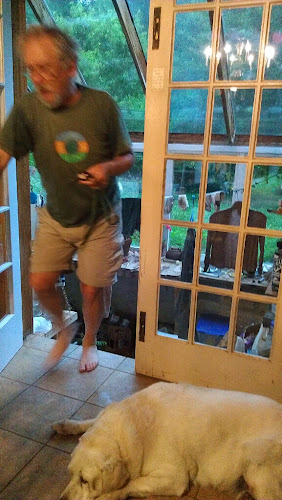 I feel immensely privileged to get to spend time once a year perhaps more in the mountains. I like to come up on the Triumph and spend a few days riding mountain roads, an activity that recharges my batteries, renews my pleasure in motorcycling for the fun of it and allows me a moment or two to miss my dog (my wife uses a telephone with some dexterity). To bring Cheyenne is to slow done and smell the roses, or the cow manure, depending on the circumstances.

There are things here that remind me of my childhood, the farming, the society rooted in pre-industrial values that when I was a child were a drag and that now at I am an adult are a source of nostalgia. Happily I have lived my life as fully as I could and I have few regrets. I admire Bob and Geeta's sense of rootedness in their community, values both their boys have inherited or learned but the idea of a whole life spent circling a rural village was offered to me when I was a child in Italy and I firmly rejected it. 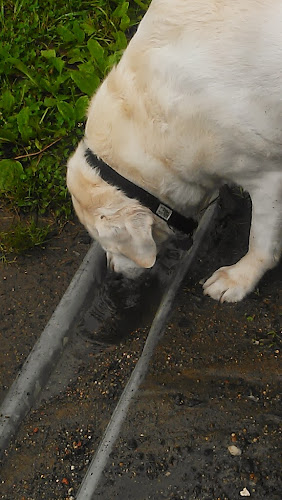 Mason, Bob and Geeta's dog inherited from their too busy daughter-in-law died last March. He got cancer and two months later he was dead but not before he paid his respects to his friends and neighbors. Bob tells the storylfhow how Mason was getting to weak to go down the steep stairs by himself so Bob lifted the forty pound dog in his arms and took Mason out to sit in the grass on warm Spring days. Mason would then roll himself down the hill to the road and stagger off across the fields. When Bob noticed his dog had gone he'd think to himself Mason had gone off to die. Not a bit of it; Bob would get calls from various neighbors announcing Mason had showed up and was tiring and needed to be collected and taken home. On a trip into town they loaded Mason onto the back seat and by the time they arrived in Asheville he was dead. 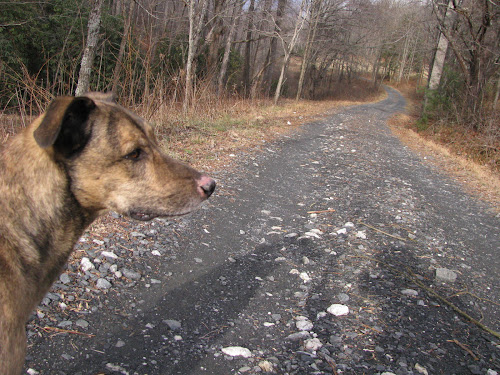 Good bye Mason, I miss walking with you. As does Cheyenne who liked competing for your supper. 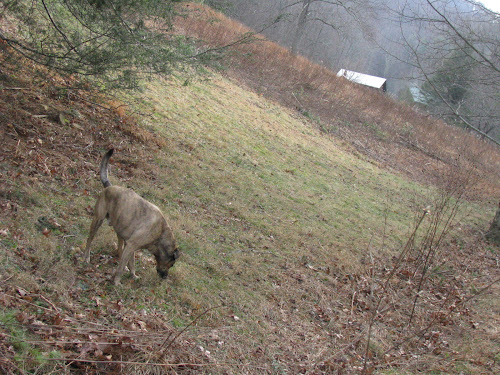 Geeta's hip replacement is bothering her from time to time as the nerves severed in the operation grow back but she doesn't let them slow her down. She and Bob play the grandparents now, not because they have to but because they want to. Like all of us past the age of fifty they have friends who have died, have cancer, take medications all day, or who grumble that growing old isn't for sissies. As I write this my wife is in California for her oldest friend's memorial service. Who needs cancer "awareness" in this generation? I look at twelve year old Cheyenne chewing a bone contentedly and wonder how long she has, or if I will beat her to it with a tumor or a wreck? In the end all we have is the time we have and spending it wisely is the most important thing to do, and the hardest.