I am getting withdrawal symptoms from not going downtown much these days but my time is spent working and walking the damned dog and luckily or unluckily Rusty enjoys the country air. Luckily because I simply don't have the energy to haul him into town for a three hour drive/walk. Though there are things I want to look at and photograph so pretty soon this will have to happen. 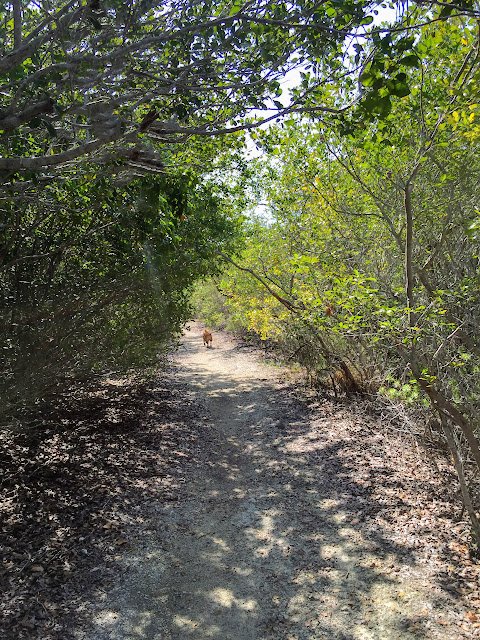 There are several construction projects underway that I want to check on and Caroline Street and Truman Waterfront are being transformed and there is progress to photograph, hopefully forward progress.  The City Commission, in its continuing drive to keep Key West firmly in the 20th century is looking at building more parking while making no effort to encourage cycling or walking. And traffic is amazingly bad. Endless traffic jams are by-products of the housing crisis and no one talks about it... 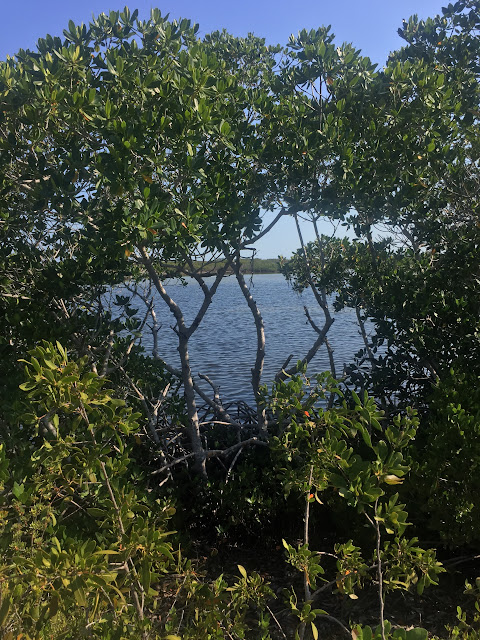 But I am out in the boonies walking my dog ignoring all these things, missing out on Conch Republic Days and all that stuff, I haven't been to a live stage performance in weeks and there were a couple of concerts I wanted to attend at St Paul's. It's a long list of stuff I am aggravated about but Rusty and these beautiful serene mornings in the Lower Keys are not among them. 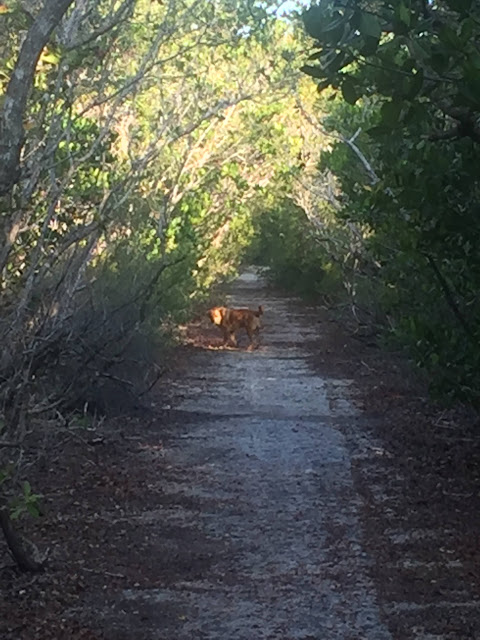 In the pixellated photo above obviously a telephoto lense would have been good but that is one area where the iPhone does not meet requirements. I wonder if I would haul around a "proper" heavy single lense reflex digital camera for the opportunity to take macro shots or fish eyed shots or telephoto pictures...and I expect I would if I had an easy path to download those pictures to my blog. I took a moment to get a picture of the gray camouflaged mangrove snapper swimming but slippery mud conspired to almost launch me and the phone in the water and Rusty got tired of waiting for me to compose the shot. So I compromised my artistic vision and took a crap picture then hurried after my rapidly disappearing dog. 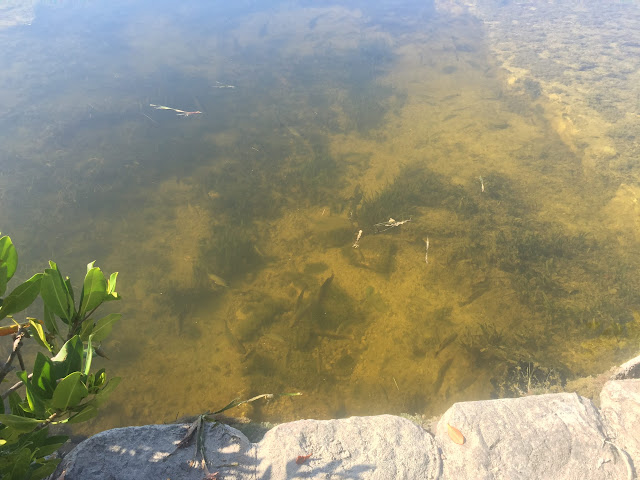 Rusty is a rapid mover, he trots at speed kicking his hind legs out to the side as he skips along far ahead of me and he rarely cooperates in having his portrait taken so a telephoto would be useful for him too. 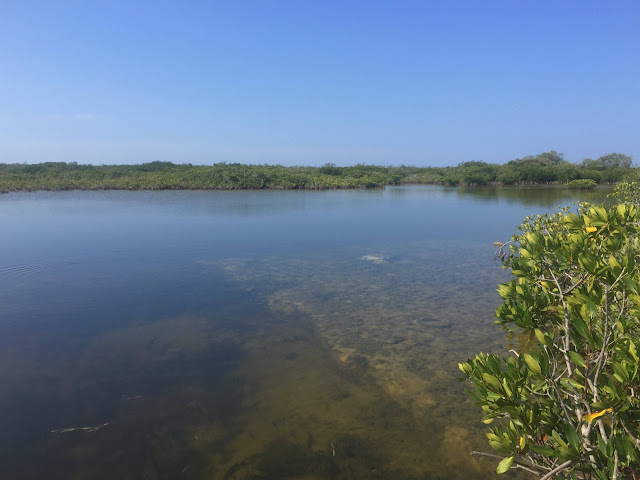 The thing is it hasn't been as hot lately as you might expect, there is a cool breeze in the mornings to keep the heat and humidity at bay. My young colleagues at work look at me rather strangely when I point this out but they are thirty year old weaklings and they don't take their dogs for extended morning walks, they go to bed after night shift. 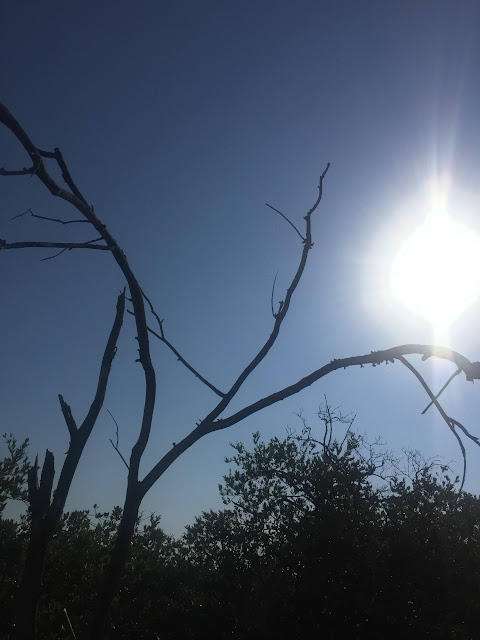 The BBC has been reporting that the past five months have broken heat records for the planet so it seems inevitable change is on the way. They keep talking about 2050 and 2060 being thresholds for untold human misery. I figure I'll be lucky to alive in 2037 when I will b 80 so I'm hoping I will be dead before catastrophe strikes. It's a rather feeble act of self defense in the face of appalling news but like most people climate change leaves me wondering what precisely to do. 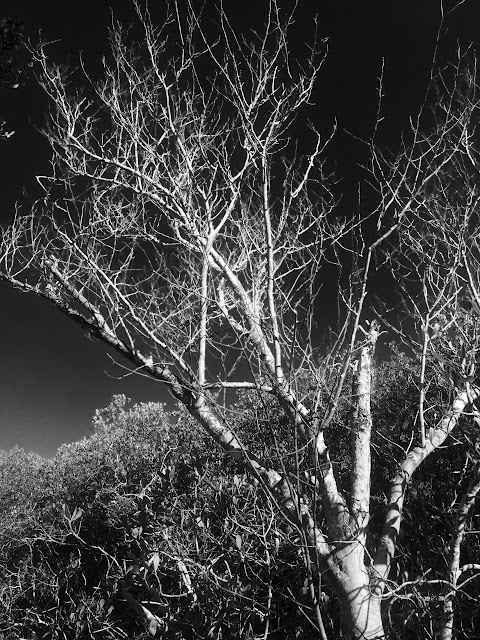 Summer is sweeping across the northern hemisphere and I got a taste of it in Raleigh last week, that best time of year when everything is a brilliant green and the air is still fresh and snow is forgotten. Down here it's hot enough Rusty is plopping himself in water courses to cool off, but he does run a lot to raise his body temperature. Spot him if you can: 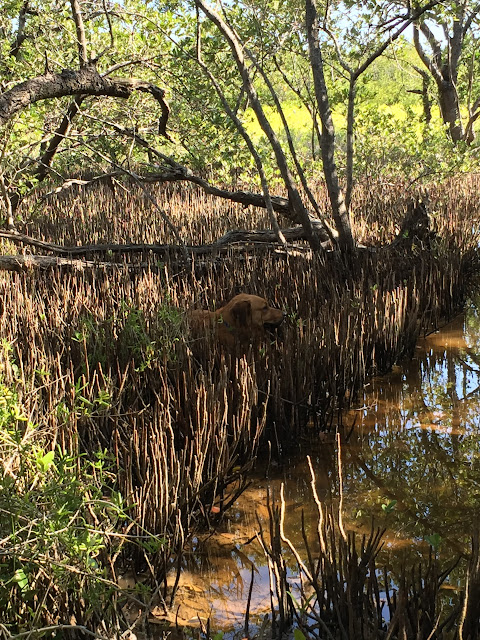 He is accepting his inevitable baths with a lot more grace too, these days and he knows when he gets covered in mud or seaweed or salt water his going to meet  freshwater and soap at home. Early on he used to run and hide like it was  a punishment, nowadays he goes to his couch and expects to get a chicken strip for heroic behavior in the face of the hose. 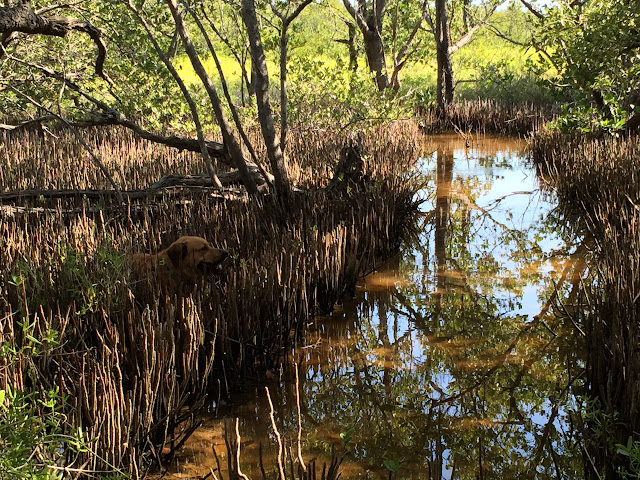 Such a bucolic life, you'd be astonished to hear all the drama I hear at  night on 911- a different world.