To arrive in Austin by road requires you to drive through the world outside, a ring of fields and farms, suburban strip malls, and small town America. Austin is the capital city of the state that may be opening the road to the repeal of Roe versus Wade, a law change that has the news people all aquiver. On the ground such esoterica matter not that much when planning a visit to a city renowned for its food and music qualities. Austin is where we wanted to eat barbecue, listen to live music and perhaps even sit outdoors and drink local beer. Decadence personified. 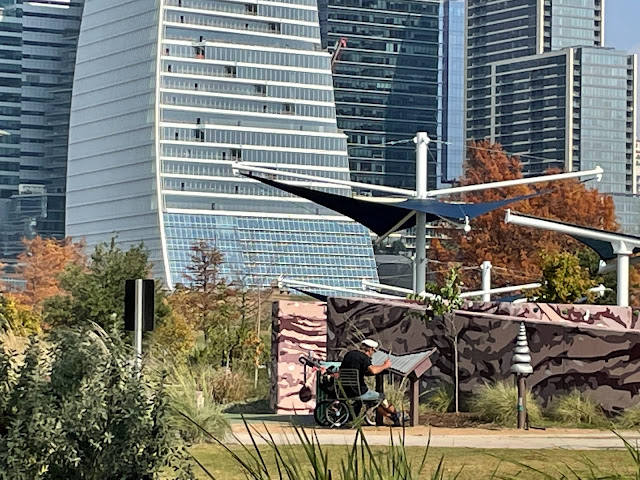 There is that by now well known aphorism to Keep Austin Weird, which to my mind if you have to consciously keep a place weird it's too late. However Austin does try to stay weird. The guy in the park plying the xylophone while wearing a "yachtsman's cap" may qualify. Earlier I saw him trying to comfort a homeless woman curled up in a ball sobbing hopelessly, the sort of homeless drama that caused tourists to breathlessly call 911 in Key West and we dutifully sent officers to calm down the usual suspects. By the time we had parked the van and paid three bucks for 90 minutes all was once again serene. When Layne took Rusty for a walk she saw dozens of elaborate shelters in the far reaches of the park. 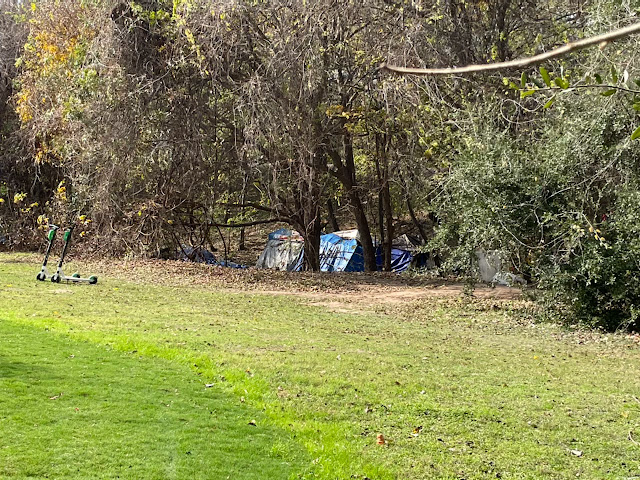 One has to be aware of people in glass houses not throwing stones, but even from the perspective of a voluntary houseless van dweller it seems a bit much to turn a park into a camp. Is that part of Austin's charm or not ? I have no idea. Qw ate our lunch and moved on. There are many homeless in Austin, not the level notorious in San Francisco but I was reminded of the bad old days of tents lining South Roosevelt Boulevard one year in Key West. 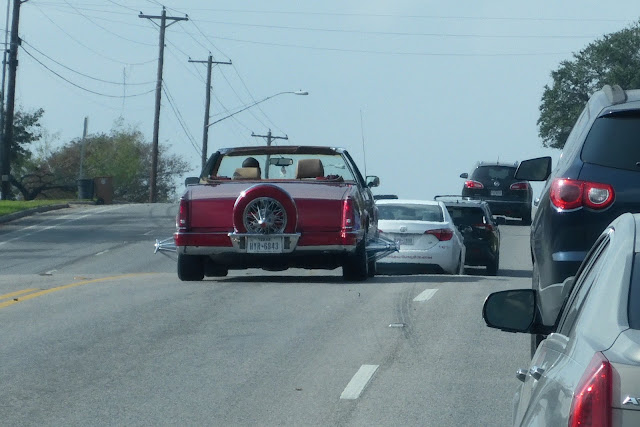 A middle aged black guy driving an elderly Cadillac with chariot wheels worthy of Queen Boadicea, well that to my mind is weird. I've had enough flat tires lately not to want to put his rotating scythes to the test but there he was, stereo thumping a deep bass, as he spun his way down the highway, him and his sticky-outy hubcaps.. Decidedly weird. 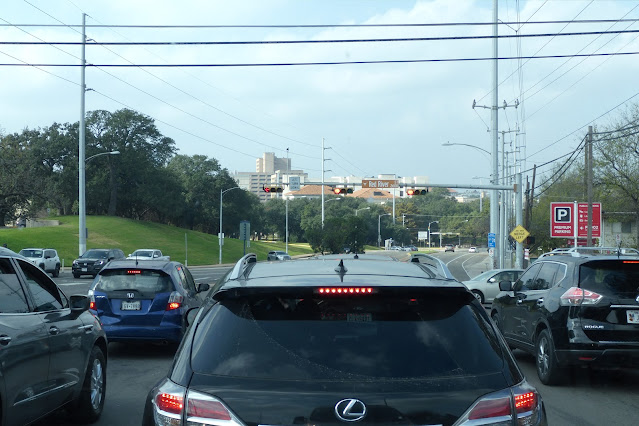 One very normal facet of life in every modern urban agglomeration is heaps of traffic. Austin has tons of that and parking is at a premium and the city has all the usual joys of a modern cultured interesting city with expensive housing and too many would-be residents. It also has that music and food thing going on. I got in line. 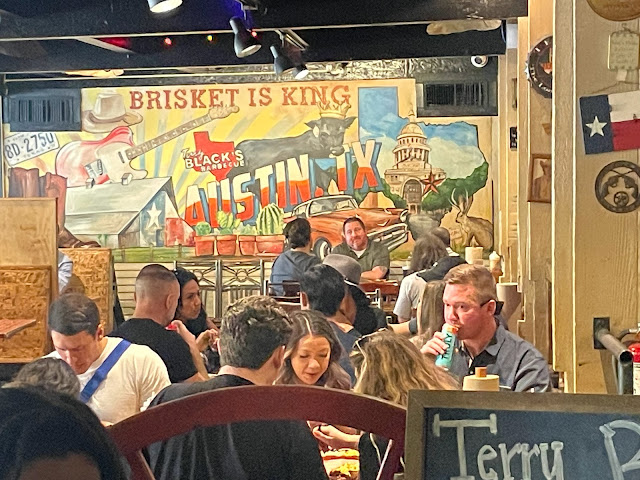 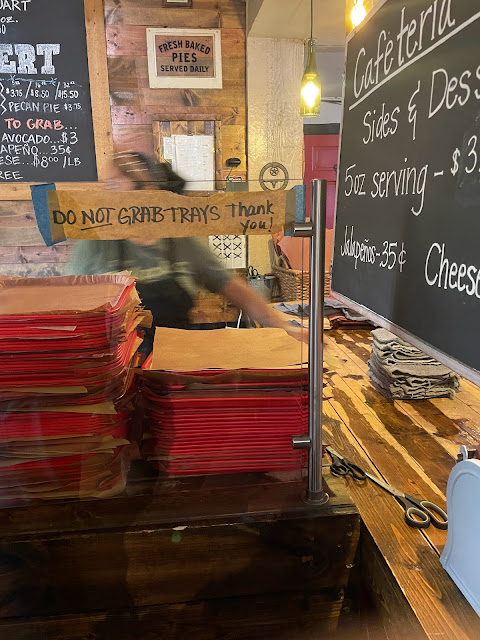 I saw the sign above telling impatient customers not to help themselves and apparently the screen wasn't enough. The sign is old and curling so I expect manners haven't improved over time. The customer in front of me, a tall white man around 35 years of age maybe, turned abruptly and said: "You want me to step closer to them?" pointing to the line ahead of him. "I'm not going to."And with tat moment of defiance he turned his back on me. I pondered for a moment and said: "I was laughing at the sign," and I pointed to it. He looked at the signing looked at me and then said: "I don't meant o eb rude," and turned around again. Don't ask me to explain what was going through his unmasked head. I'm retired I wanted to say and no one's paying me to be your therapist. I simply waited my turn. 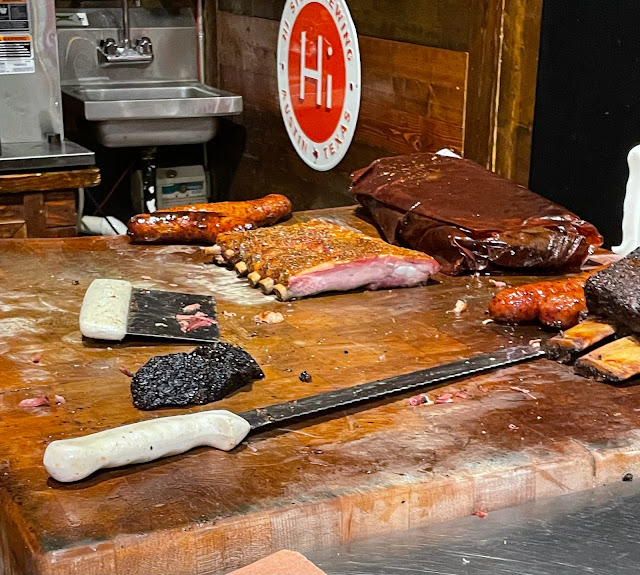 The line moved rapidly and efficiently. Mac-and-cheese to go one pint, creamed corn one pint, half a pound of brisket. Anything else? no job done. 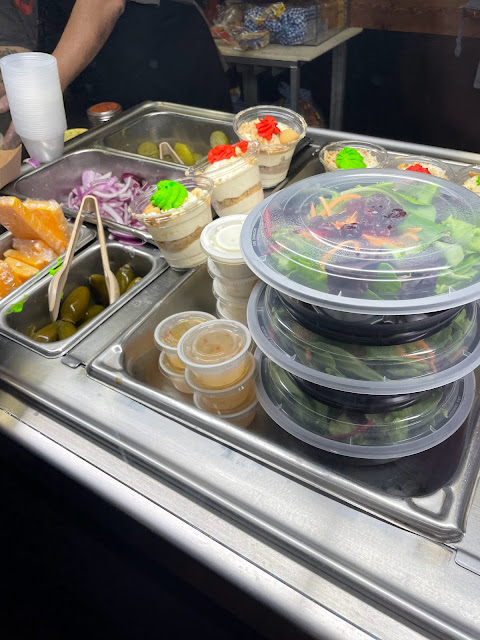 The place was packed and they don't take online reservations before one pm for some reason and they don't do curbside or anything remotely modern. The system has obviously been honed over the years since their opening in 2014 and it works just fine. They will even deliver to you across the country. 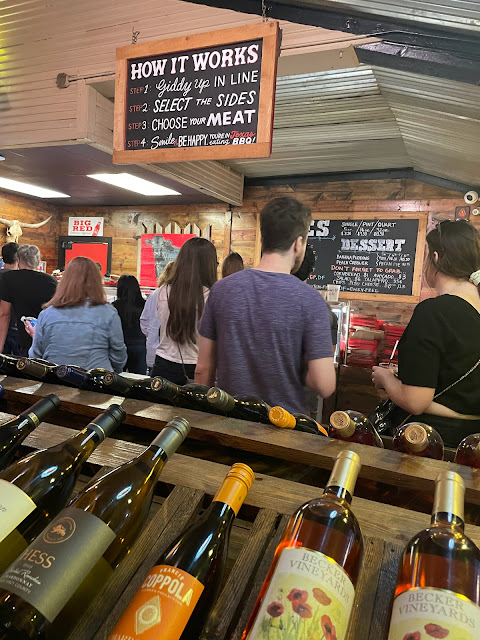 There are two Blacks BBQ restaurants in Austin, one on Guadaupe Street near the University which calls itself proudly "The Original" and this one downtown by the river. Apparently it was family dispute between the Uncle who owns the very first restaurant in the town of Lockhart and forced his nephews who wanted to open a Blacks BBQ in Austin to change the name of theirs so they named it after their father Terry. Then the Lockhart Uncle decided to take them on and opened his place on Guadalupe Street. It reminded me of the period when there were two Sandy's Cuban Cafés on White Street in Key West.  Read the Black saga HERE. 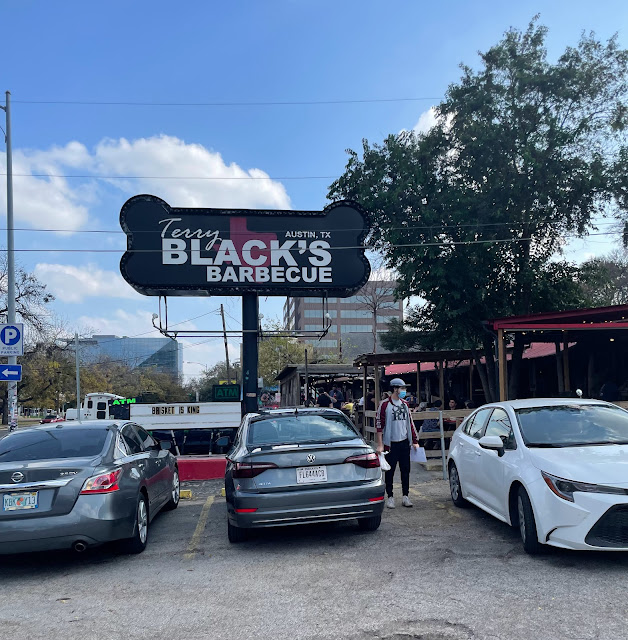 We were busy unloading the loot I brought back to Butler Metro Park when a woman appeared on the doorway asking if we knew whether the Dougherty Arts center next door was open. We admitted our outsider status, houseless van dwellers in a permanent population of the park's unhoused. She was fascinated by us living happily in or tiny space and admitted she wanted to get her husband interested. He's an engineer so my suggestion was to get him worked up about designing the systems he wanted. Engineers over think things by their nature and giving them a problem to solve hooks them usually. At least it did among the sailing community its we used to navigate amongst. Candace, a native of San Diego, was shyly enthusiastic about her home of five years and you can see why. She is an oil painter by inclination and you can see her work on Instagram @livelyvibesdesigns. 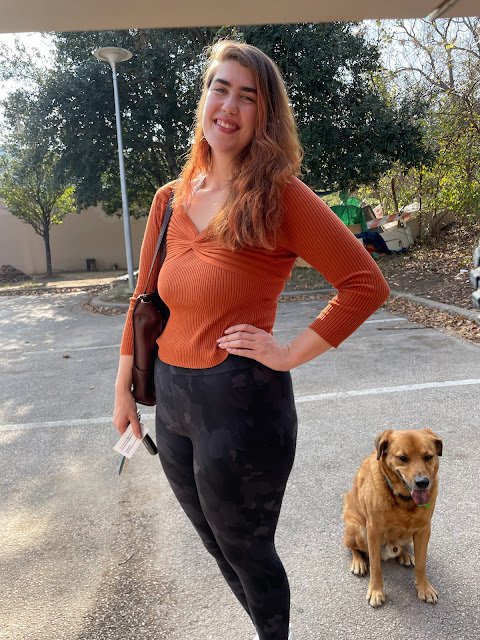 We talked for a good long while about her life, her husband the immigrant, her career choices (I advised working for county or local government of course being pensioned myself) as well as life in Austin, an increasingly expensive town. For young people she said, and for us too I said thinking about the gentrification of the Keys. Her enthusiasm and appreciation for life put Austin in the plus column for us. And then there are local pastries. 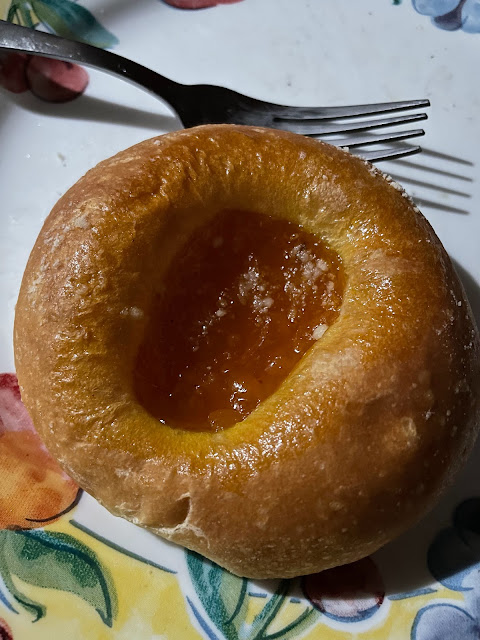 We had read about kolaches after a reader turned us on to them and Layne discovered a bakery producing only kolaches next to a five star rated laundry. Life on the road requires work of the more mundane sort and we hadn't done laundry since Pensacola at Therèse's place. So we live like students once again...at the laundromat! 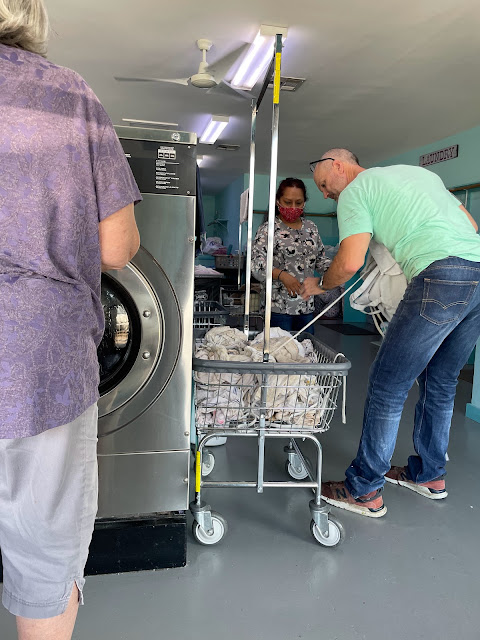 It does help to have your van parked outside so you can set your alarm and go take a nap in your own bed. I enjoy not taking responsibility for the machinery, like taking showers at truck stops and not having to worry about clean up and making sure the plumbing is working. Use it and leave it. Lovely. 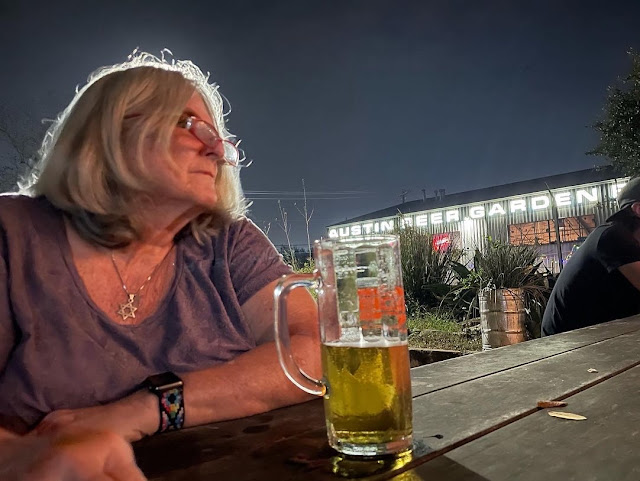 We rounded out our day in Austin by shopping at Trader Joe's and having a German Lager at the Austin Beer Garden Brewery -ABGB. The beer was actually quite good and at 4.5% not at all harsh for my delicate palate. The music was pleasant but a bit distant for those of us sitting outside in an 80 degree evening. For the night we chose a scenic overlook 15 minutes outside the city on Highway 360. It was not the best possible choice. At three in the morning a group of lost souls showed up paling loud music followed rapidly by some desperate character playing a thumping loud bass for an hour. Layne put in her ear buds, Rusty snored and I read. The wind of the arriving cold front picked up and the frustrated youth packed up and left. 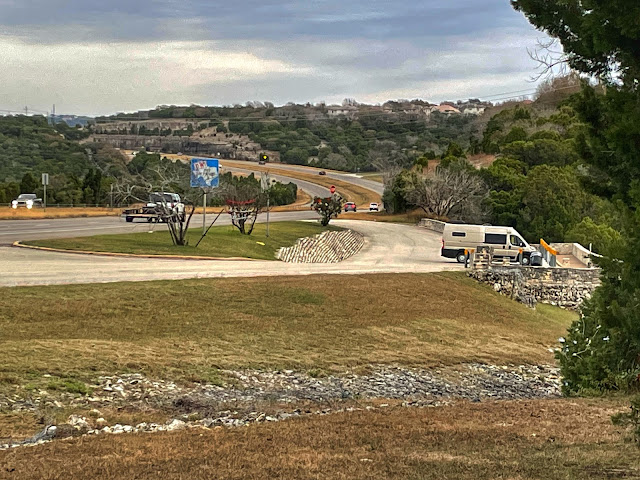 To spenda. day in Austin leaves you wanting more and after the plague finally abates we will return as there is much more to see and do. There is a reportedly rather splendid park called Emma Long with RV parking at reasonable cost but with a website that defies being able to make a reservation. In my head we will spend a few nights there and spend our days giving Austin the attention it deserves. 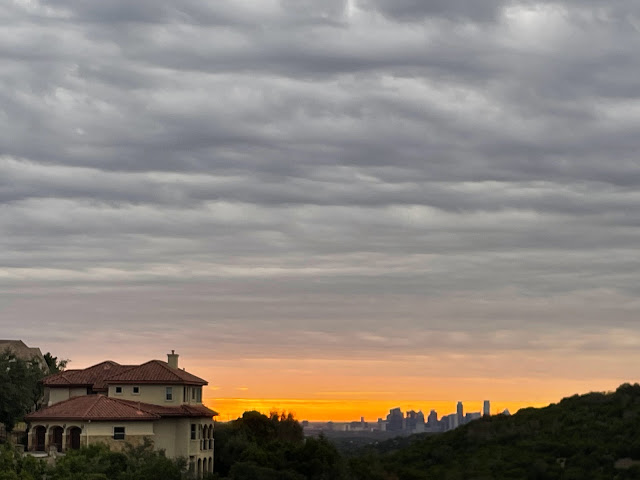 Next up: Kerrville and the Museum of Western Art and some thoughts on the Hill Country. Oh and a harvest host selling cider among the vineyards.
Posted by Conchscooter at 5:48 PM 1 comment: