A Uruguayan Steak At El Mocho

I am not fond of lists of the best of anything much, least of all Key West. Though I will say that any list that purports to describe where locals go to eat and does not include El Mocho is bogus. There I said it. All those experts who tell people that this or that or the other are locals' hang outs are talking through their hats. You don't get more down to earth and local than the place where the Stock Island Nikes gather. 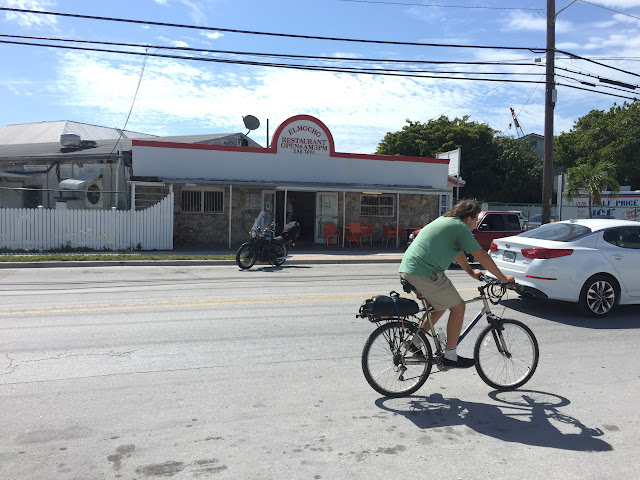 I was standing around trying to figure what I wanted to eat when I saw the specials list squiggling across the white board in the spidery handwriting that is a hallmark of the place. I saw Uruguayan steak listed. I ordered that immediately and another customer asked me what it was . I haven't a clue I said, I like adventures. So he asked the woman behind the counter and I butted in immediately "A sorpresa"  I said and she looked at me quizzically. As long as its not liver I said - higado - and she shook her head vigorously. I went outside to my curbside table and left her to describe the mystery dish to the other patron at the counter. He came by a few minutes later and winked at me promising I would like it. I did: 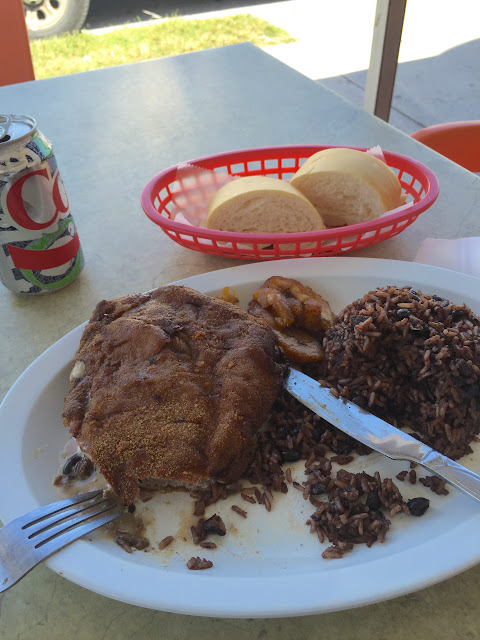 I had no idea what Uruguayan might be like and I was surprised all right by a big pancake of fried batter containing mystery meat...It turned out to be a meat sandwich of two thin Cuban-style palomilla steaks  sandwiching a slice of ham and a slice of now molten smoked Gouda type cheese. Let's be honest I didn't actually need this monstrosity but it was excellent. Totally over the top but a fine moment of culinary exploration. 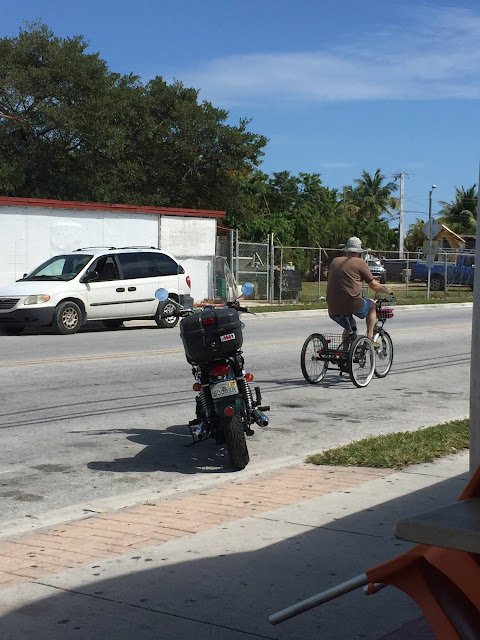 Somehow I have to control myself. I could eat Cuban food (or it turns out Uruguayan) every day but this occasion was simply because I was taking a work related class on Stock Island and I planned to enjoy my lunch break on a bright sunny winter afternoon. 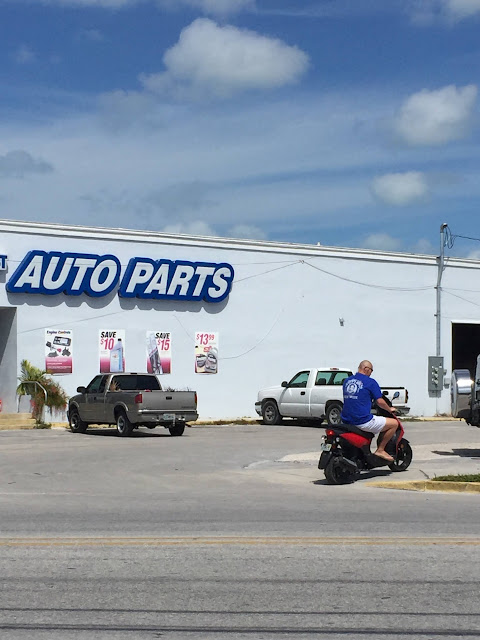 I watched the world go by on the main drag which bisects Stock Island and Maloney Avenue was busy enough with scooters and bicycles and then came the RV which was a reminder that Boyd's Campground is in fact the closest campground to Key West itself. Which is why they describe their Stock Island property as "Boyd's Key West Campground." Key West does not permit sleeping in vehicles and vehicles over 20 feet long are not allowed to park anywhere on city property so Boyd's is it for RVers. 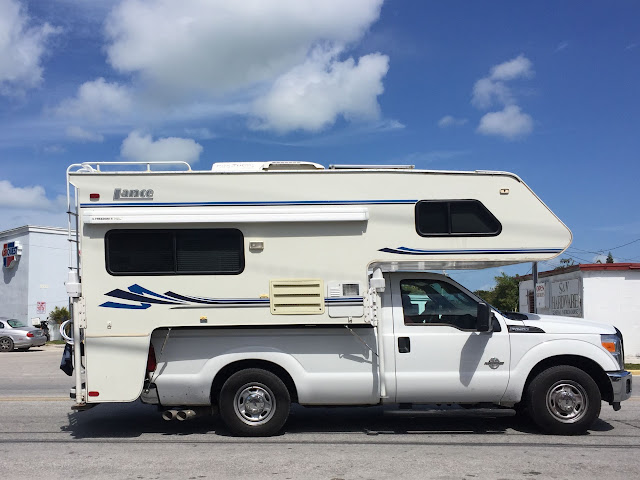 It's not a bad way to spend a winter is it? 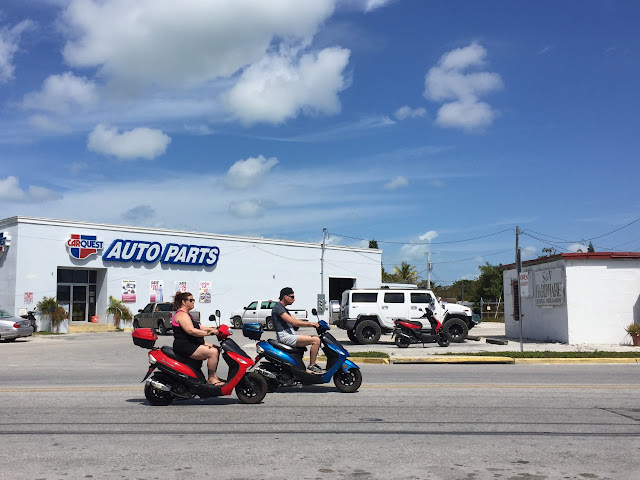 Lunch to go for the working stiffs of Stock Island. There are all sorts of plans coming into play to convert the light industrial and trailer park island into a more profitable development with hotels and expensive housing coming. 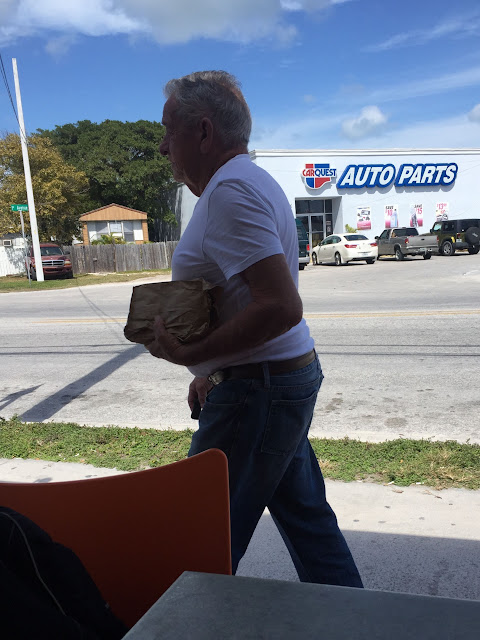 I hear people lament the passing of the good old days in Key West but these aren't people you will find slumming it on Stock Island. I have a notion that if you plucked a Conch from the 1930s and stuck him/her down on Stock Island in 2016 they would feel a lot more at home than in modern Key West. But the Key West I read about from that era isn't what modern visitors really want. They want a hint of roughness, a suggestion of danger, a Disney adventure with a sure and certain outcome. They can find all that here but it's more colorful and comprehensible on Duval where the alcohol is. 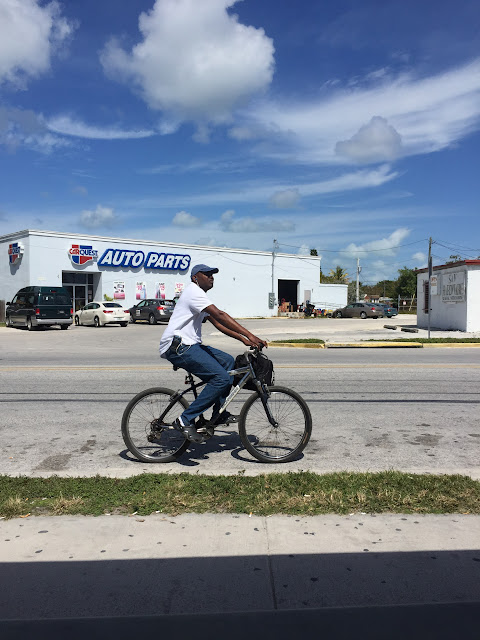 Stock Island isn't at all a den of iniquity. They deal drugs here I am told but they deal fighting roosters as well and there is unsightly  poverty and crowding and rather beat up trailers and people living lives. Just not too many tourists because they prefer the colors of pirate myths and cheerful bands and those pesky t-shirt shops four miles away. Besides Stock Island doesn't have tourist amenities - yet. So why would visitors crowd these dusty streets? 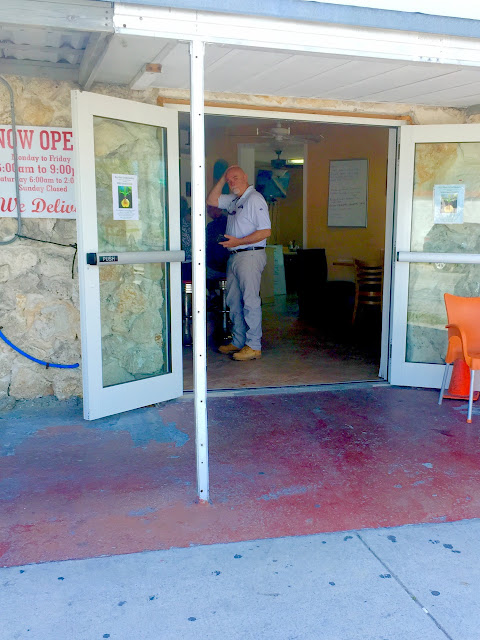 I like El Mocho, though I don't much care for the genial chaos of Stock Island. I like a certain amount of disorder and as picturesque as Stock Island is I prefer my quiet suburban sterility on Cudjoe Key. I like dropping in though and eating different food from time to time. Perhaps next time I will see a lost Key West visitor eating how the locals like to eat. And those Stock Island Nikes? I got this picture ironically on the Key West waterfront:
The "Nikes" in question are the white rubber boots popular among local commercial fishermen. That's the sort of fashion statement that comes out of Stock Island so beware...of your foot ware at El Mocho. I've never had a problem with pink Crocs.
Posted by Conchscooter at 12:00 AM 3 comments: