I have a state parks pass which allows me to visit any Florida state park for no charge. It costs $135 a year if it includes access to parks in the Florida Keys, and though it may end up saving you money it also carries the benefit of encouraging you to visit the parks on a whim. Which was what I did on a lovely sunny afternoon last week. Cheyenne walked all properly leashed and I ambled with camera in hand. 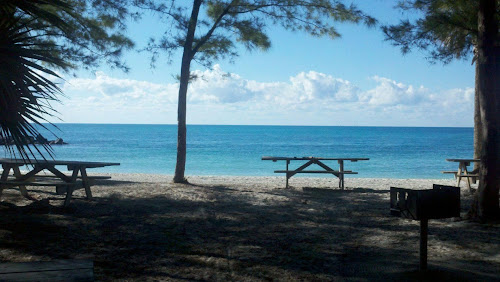 A perfect day for a pleasant walk in good company.

Posted with Blogsy
Posted by Conchscooter at 1:00 PM 4 comments:

Changes On The Waterfront

Wandering along Truman Waterfront pondering the future of these thirty four acres deeded to the city by the retreating Navy I noticed some changes already taking place.

The city has decided to make a park out of the land though the exact terms are somewhat obscure, as is the way. There is a possibility of a marina which has been offered up and roundly criticized by some vociferous city residents as excessively ostentatious and aimed at the luxury set. Meanwhile the formerly open space now has fencing all around. I wondered if it might have been installed for the power boat races but such was not done previously and the purpose defies logic. I expect it is the first step on the path to transformation of the land.

The newspaper also reported the Navy might be seeking to relinquish control of the outer mole, the long cement arm that forms the basin and separates it from the open waters of the harbor. There is an agreement between the city and the Navy that came about when Truman Waterfront was ceded to the city. That took place around September 2011 and the attack on the Twin Towers prompted the Navy to reserve the docking facilities for themselves, and simply allowed the city use of the pier to dock cruise ships as needed. The beauty of the arrangement is that the city gets the full docking fee there instead of sharing the fee with the Westin at the neighboring Pier B. Now the Navy may be seeking bids to take over the Pier and the city is pissed inasmuch as it may lose the cozy relationship.

Nothing stays the same in this busy evolving little town. Except the sea.