Something happened to me in the past ten days and I'm still processing what exactly it is. It's nothing dramatic, externally, but inside I've been evaluating how I feel about where I live. It's odd, but I think that for the first time in 55 years I am trapped where I live, and what's even more odd I don't think I mind that too much. 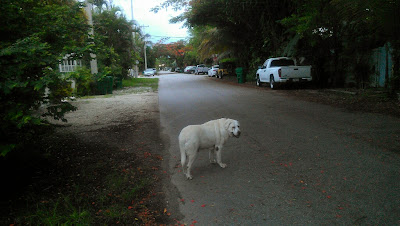 When I used to live on a boat anchored off Rat Key, north of Key West I used to walk into town across Peary Court which was an open space with a baseball diamond and acted as a short cut from Garrison Bight where I landed my dinghy. The Navy took back Peary Court and built ousting it didn't actually need. Now they have graciously given theland back to the city and built terrorist proof housing directly on Fleming Key inside the Navy base. I'd like to see Peary Court revert to open space as it would make a lovely park but now the plans are for more housing. No turning back; oh well. Thinking about the past led me to Harpoon Harry's, a diner where I always used to eat at the end of those walks in my search for breakfast. I don't eat out much these days at breakfast time as I am eager for sleep but from time to time I go and eat an egg and think back to the "good old days." The modern equivalent for young boaters might be Cuban Coffee Queen nearby: 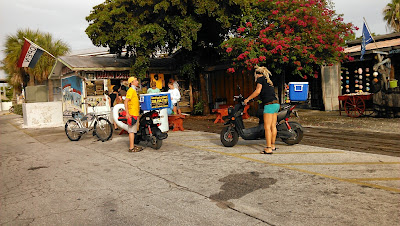 One piece of social engineering the city managed to do well in its past was to lease the waterfront around Key West Bight and create a boardwalk with quite a few thriving businesses who rent space from the city. 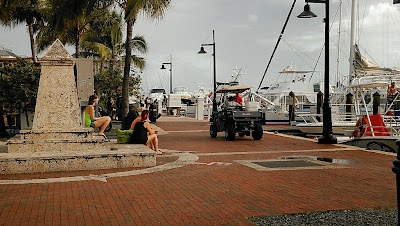 Look up and see commercial planes sliding over Old Town bringing more people to visit southernmost city served by a foreshortened runway. They've talked about making longer but the mangroves, protected by the state, flourish at each end of the tarmac so getting bigger jets into Key West is still not possible or likely. 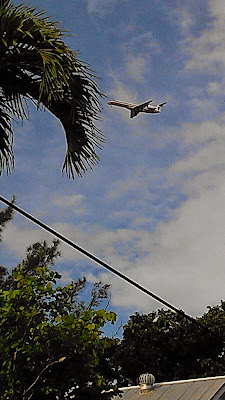 I first came to Key West by Vespa more than 30 years ago and I really like riding around here even though it has it's shortcomings, flat and straight as it is. A reader mentioned wanting to ride their Fat Boy on the Overseas Highway and I saw this Harley which I think is a Fat Boy (so called for the wide forks that allow wide tires I'm told) on Elizabeth Street: I was wandering pretty much at random across town and stopped in at the Armory which is operated as an art gallery and a place for artists to visit town and practice their craft. I had no idea what I might see and that's part of the charm.

I just strolled around looking at the art, not taking notes or anything and I enjoyed it. 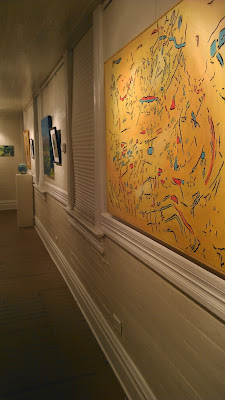 I like the Art scene but I like it on my terms. I'm not social and my fund of small talk is so small you couldn't put a single angel on the head of that nail, so standing around listening to people getting intoxicated and talking about themselves doesn't do much for me and I come away frm these events worrying how I made a fool of myself. So gallery openings rate as mental thumbscrews for me. But empty galleries are lovely. 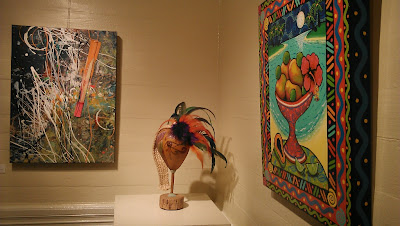 I've said it before and I'll say it again, but the Internet made Key West livable for me. The electronic connection gives me the ability to easily reach across the miles and not feel isolated. Silly isn't it? You'd think the choice to live outside the mainstream would predicate a desire to avoid the mainstream but I like the ambiguity of being able to live on the periphery and read about that which he center is busy doing. Sitting in isolation ignoring the world outside never was my style and I valued Valladares' news stand for the connection their newspapers and magazines gave me. That was destined to die with the arrival of the new electronic world order, and it did. 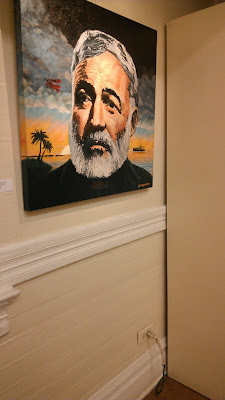 I know they'll you there are no seasons in Key West, and in Spring everyone Up North loves seasons when the leaves pop out and life comes to life anew. In winter they bitch long and loud and my page views go up thirty percent as they frantically seek an affirmation that sunshine still exists outside their gray cold world. The seasons here are hot and humid or warm and dry but that's only meteorologically speaking, because summer is the outdoor season in the Florida Keys. It's the time we see fewer neighbors, a scattering of tourists and we enjoy sunsets at eight thirty, not late by northern latitudes, but later than winter sunsets in the Keys. We fish and go boating, we barbecue and take walks in the rain. We vacation Up Orth to escape the humidity and we crank up the air at home. We watch TV and go to the movies to escape the heat. We watch the tropical weather at the National Hurricane Center website and hope that when that season ends on November 30th we have in fact dodged another one. By the ourmbthoughtsturn to the warm and dry season as we wait for the second cold front of the Fall, theone that breaks the back of the heat and humidity once and for all, rains retreat and the skies clear after each roiling black clouded cold front blows through. That's when we get ready to greet winter residents, plan parties, buy tickets to the new season of plays and spruce up generally for winter. My dog perks up whe she can leave house even while the sun is up... 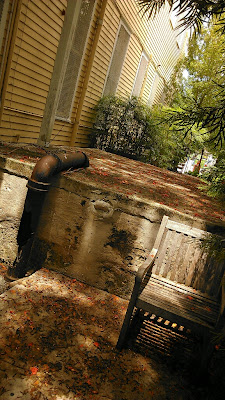 I met this guy fixing his bicycle and his kilt was ragged and torn from use. "You need a thick skin to wear one ," he said and I admired his comfort. I'd like a kilt but there is some resistance from the wife and I'm not yet readyntomforce the issue. Do you think he looks poofy? UTILIKILTS - American Made Utility Kilts for Everyday Wear I was wndering what the Chief would say if I asked if it was okay for a male dispatcher to go to work in...a skirt? Hmmm. 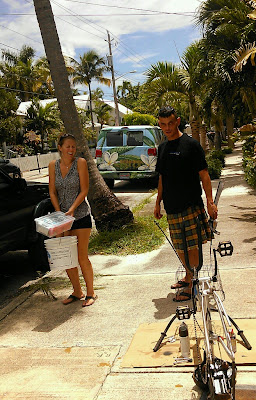 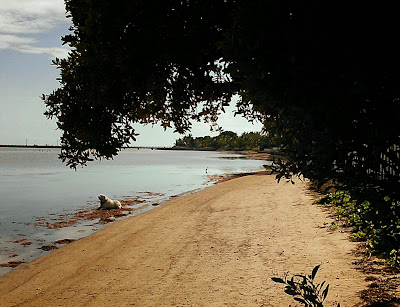 I miss boating even with my piddly little center console and sometimes I miss living at anchor for a weekend and leaving the land behind. It's been difficult to go boating lately but we will find time again I have no doubt. My wife is gearing up for her new much desired position teaching Adults and I continue to enjoy my city job. I just finished nine years as a police dispatcher, the longest I've held any job, and I find I still like it. I realized I probably can't make the same money elsewhere even if I could find a job that I enjoyed so much. People don't much hire 55 year old men, and I'm lucky I'm so happy where I am. I have high hopes my wife too will enjoy her new job in the school district. Late in life we enjoy our work with a chance of a pension we might be able to live on. How lucky is that? I just keep hoping civilization doesn't collapse in the meantime because I'm snug, for now. 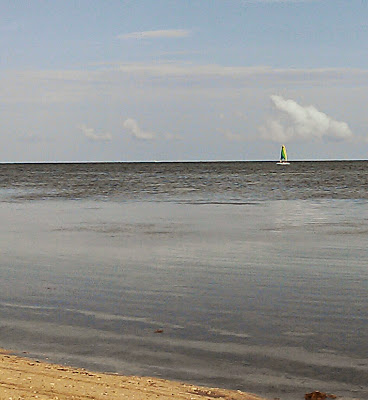 I miss the Porch, a bar that has become popular and crowded and noisy. I like the Krawl on Southard Street not least because they welcome Cheyenne and they have Boddingtons and Palm on draught. 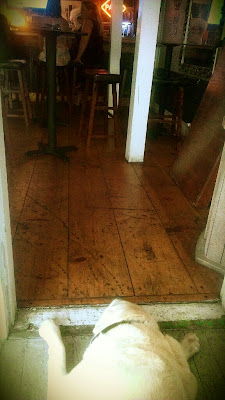 I like Cuban food, not as a substitute for Mexican but because it is old fashioned meat and cheese and bread with no apologies to the 21st century. There is also the fact that Cuban food is truly an ethnic cuisine in Key West, it's what Conchs eat and they like to eat well. 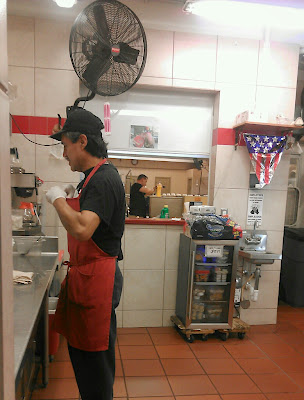 So now and the I go to Sandy's cafe and get a con leché and a cheese bread and rejoice in the fact that this is my home. 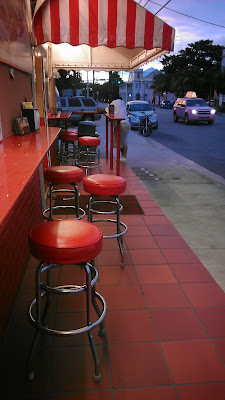 I live in town whee I can walk safely at night, where crime is present but more of an annoyance most of the time. Violence breaks out of course but if you lie with calm people and don't get belligerent and drunk in public you are pretty safe from the plague that sweeps many American cities. Key West isn't perfect but I rate it as safe for a common sense sober citizen almost all the time. 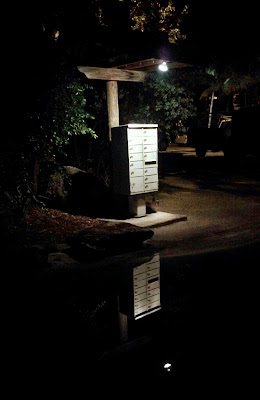 I'm not a sports fan but I like that Conchs revere baseball, I like standing on the sidelines and watching this most American of pastimes in this least American of cities, this iconoclastic little own struggling to find its way in the confusion of the new century. 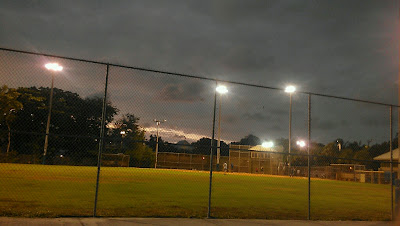 it occurred to me this week that it's a privilege to be here on the sidelines to see how it goes. I don't think the economic future is bright for lots of us, as I watch the ideals of post war Europe washed down the drain of austerity while China and Russia and even lowly Brazil start to nibble at the edges of American hegemony. I like watching the world but I like living in the Keys. That's what occurred to me this past week.