Before I took off on my ride to the Dolomites I spent my third day with my sister Liz hiking up a very steep hill with her husband of forty or more years. Photography tends to flatten gradients but this picture gives I think a reasonable view of the forty five degree hill. 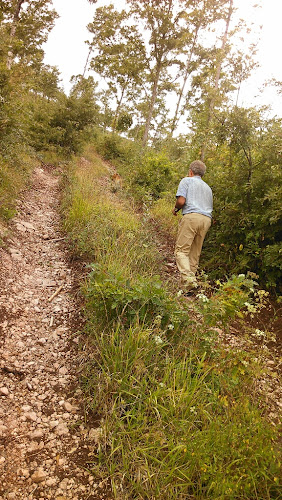 The track through the woods is used by woodcutters who bring tractors and winches up here to lower their loads to the main road where trucks haul the stuff away. The bad news is the mountain gets denuded from time tot time but of course it all slowly grows back. Wood cutting is a winter activity when the fields are fallow and waiting for spring. They pick and press olives at that time of year too but that's another story. 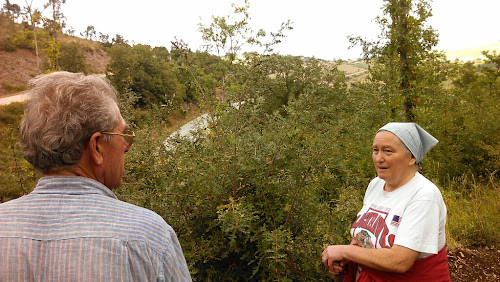 It was hot work. 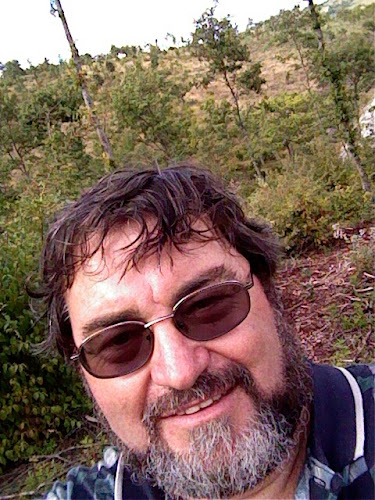 But the views were worth it. My brother in law isn't sure why they tagged his bushes but he suspects either hunters marking their way or some sort of aerial survey marks. In Italy there are no private property anti- trespassing rights as you understand them in the US. In winter hunters come up from the cities and are permitted to trample our fields and woods with shotguns in pursuit of whatever they can kill. Second Amendment rights carried to exasperation! You will often hear anti gumming types talk about unarmedEuropeans being oppressed but they aren't really unarmed at all, and they do a lot of shooting at live moving targets around here too. Vincenzo is not one of them. He hates guns and hunters. 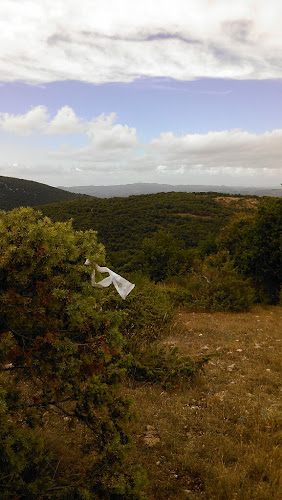 My sister, ten years older than I came on this hike to keep me company, as her husband points out she rarely even leaves the house unless its to drive the car. 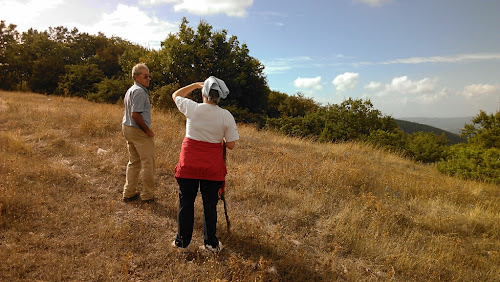 However the views from 3000 feet up,even in cutting wind, are worth it. 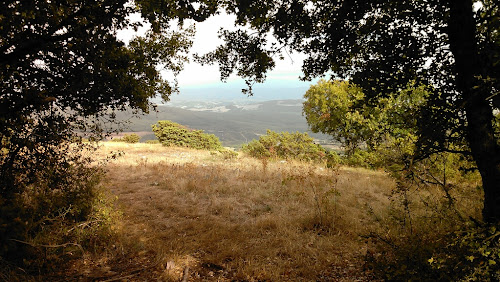 My family settled here around 1700 when the Paparini family moved north from Viterbo, near Rome. However most of the truly local history is lost to us, as the family archives are collected as scraps of parchment filled with spidery lists of numbers. When I was born some 200 families share cropped this land and gave forty percent of their crops to my mother who in turn was ripped off by her managers who took advantage of their absentee owner as generally happens in these cases. It was a very tough life too. Vincenzo could name the family that lived on the hill photographed below, people who ploughed land with oxen, shit in an outhouse and had neither electricity nor running water. Those commodities doesn't arrive till the 1960s, and paved roads only appeared well after my mother died in 1973 of a brain tumor that wet untreated for years as her erratic behavior was put down to anxiety over her hard fought divorce. This is not a country for soft living, even today. 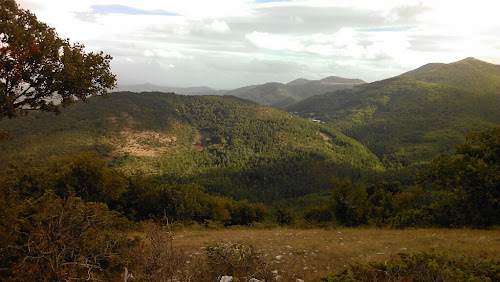 I have read books about rural life in these parts, Under the Tuscan Sun and A Villa in Umbria, and they make pleasant reading but the objects of the stories are people who live far from idyllic lives. There are lots of outsiders moving into these isolated tumble down farmhouses too isolated for elderly peas ate to be able to face the prospect of increasing infirmity far from their children. Outsiders bring money and thus ll modern conveniences to these places and they fell close to the land, but the land demands hard work and commitment for those born here. I was glad to escape, frankly and I have no regrets. And I was and owner not a share cropper. 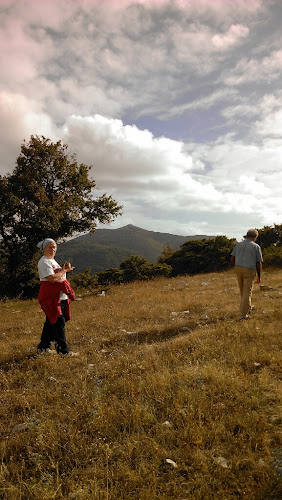 Every step of the way there is a story to tellin these hills for Vincenzo. He tells of crazy Romanian tractor drivers earning a pittance on steep sided mountains drag logs across ravines to make money to send home to their families. He admires them for their work ethic, in a way that most Americans cannot bring themselves too when talking of Mexicans in the US. "Italians don't want that kind of work," he says in an argument familiar to me in America. "Let them come here to earn a living." Watching Vincenzo's dogs wading the mud of the cows' watering hole puts me in mind of Cheyenne who I am told is doing fine without me. I hope not because I miss her terribly. 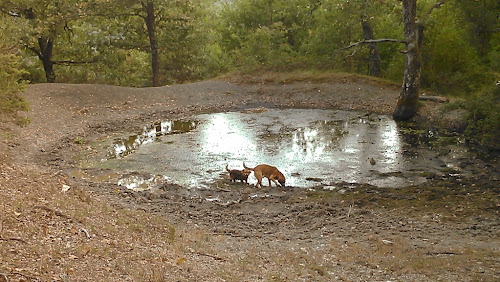 My passion for documenting my life annoys most people but my sister thinks I am funny as she always has. She is a woman who has traveled much of Europe and even came to visit me in California for one disastrous visit but who knows exactly where she is meant to be: right here. When her entire family was opposed to her marrying a humble share cropper's son she went right ahead and did what she wanted. Looking back I have no idea why I opposed a marriage across class lines and I have apologized repeatedly to them both, with no relief to me for my youthful stupidity. Perhaps that's why I am completely indifferent to the fears expressed by so may people about "letting" gays get married. On which subject, which I dare not bring up to her I am curtains he would be opposed. As usual, just because you have been the object of discrimination doesn't mean you are therefore any less inclined to discriminate yourself against others... 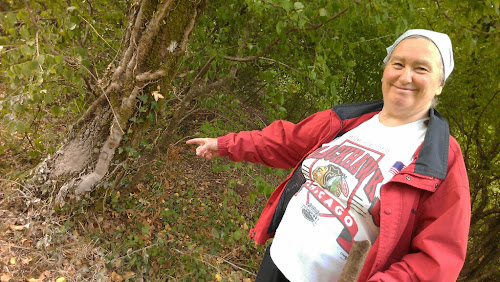 My brother-in-law says boars roll in mud not just to keep cool but also to make it easier to knock ticks off his back by letting the mud dry and then scraping it off on the bark of a tree, as seen above. We tried to take a short cut as Vincenzo wanted to get home to feed his animals before we went out to a family dinner but the trail was hopelessly overgrown. The dogs loved it, we didn't, fighting off brambles up to our chests. 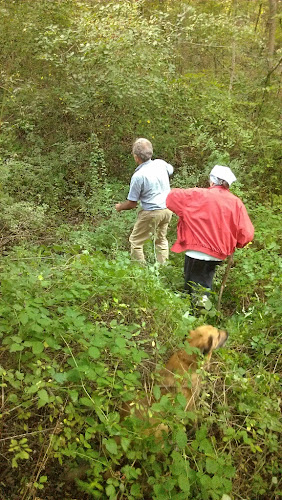 It's an odd thing growing up in a bilingual family. My sisters never speak Italian to me if we are alone. Liz's English is stilted though entirely grammatical and the inflection in her voice is that of an Italian speaker, as she alone in her family speaks the language fluently. But when she speaks to me she uses English throwing in the occasional Italian word for which she has no translation. When we were kids when our parents were fighting we spoke English to our Father ("tell your mother...") and Italian to our Mother. They fought frequently but among ourselves we children spoke English, always. Why? I have no idea. When others are present we speak the majority language. As usual I have no clue what these red fruits are but they will soon be edible Vincenzo says, when they turn dark red. For the time being they are bitter and hard. 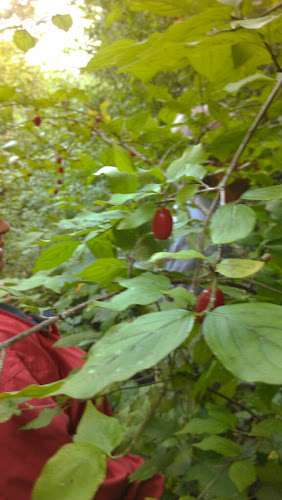 Back on the paved Vincenzo and I sacrificed our belts temporarily to keep the dogs put of traffic and he left for work clutching his pants to his waist. Liz and I meandered with Lola and Pluto, known to some as Biscotto. 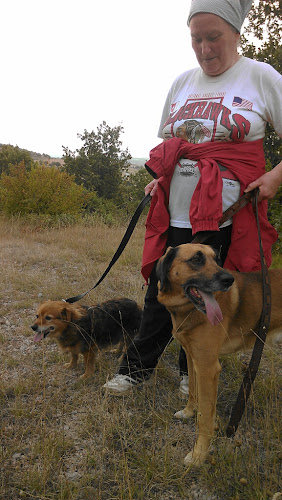 I showed my sister the front operation of my phone camera. Much amusement all round. 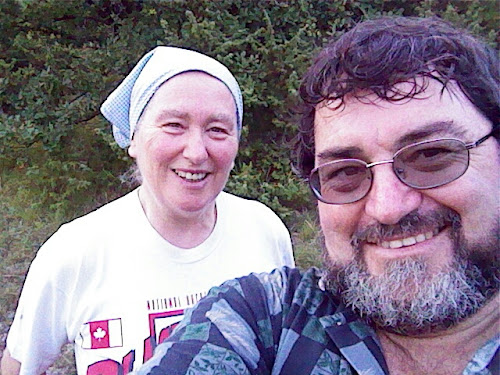 And then we were home. 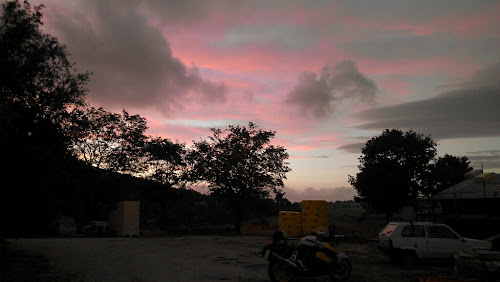 Later we went to the Rosa dei Venti restaurant a dozen miles away for a slap up dinner. My sister below, sitting next to her eldest boy, Daniele, 38 years old and full of entrepreneurial plans for the family farm he now leads. His young daughter is the new generation barely getting their ears wet in the world. 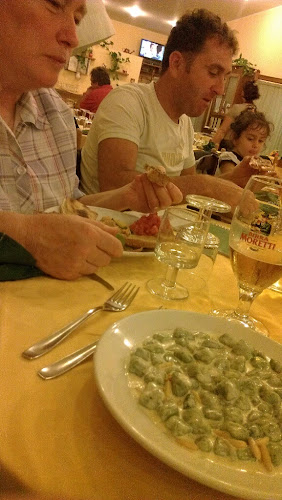 I had spinach gnocchi with Gorgonzola and pine nut sauce. Every bit as good as it sounds. Below Vincenzo with his oldest grandson Flavio (Flavius in English just sounds weird) and his mother Roberta who went to Scotland this summer to see the English side of the family and discovered she likes to travel. Key West is in her plans. 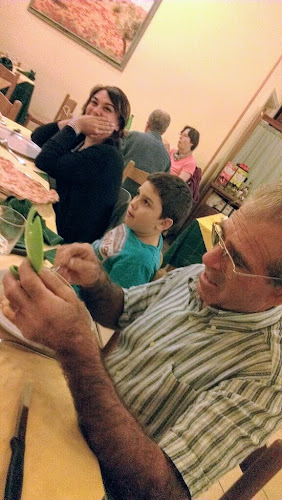 Dario, the younger son, single and in the happy position I never enjoyed of not bring the son and heir. 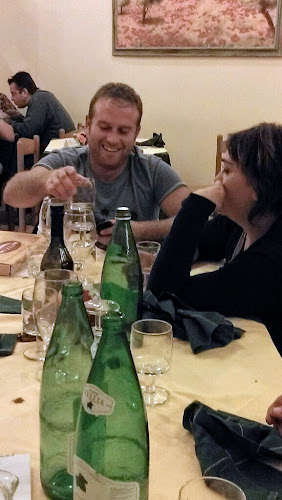 It is not my life but I wonder what it might have been had I had a family like this. 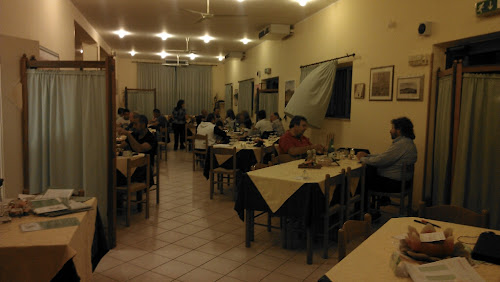 My wife notes with some justification had I not been miserable I'd never have emigrated and we'd never have met. Such are the imponderables.

Posted with Blogsy
Posted by Conchscooter at 8:00 AM 4 comments:

I was watching this guy fiddle with his saddlebags at my favorite bike parking spot. It set me to wondering what most people carry in their bags. 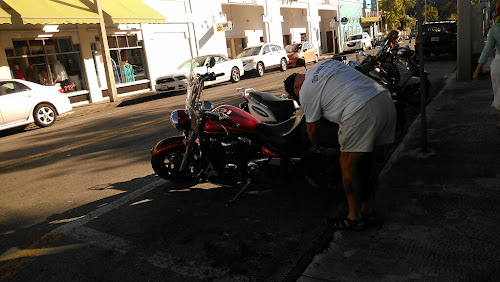 I carry fix-a-flat cans just in case, in the hope they may do some good. I have my Frogg Toggs in case it rains. I have rags and bungies and room left over for my lunch box. Not terribly wild, really.