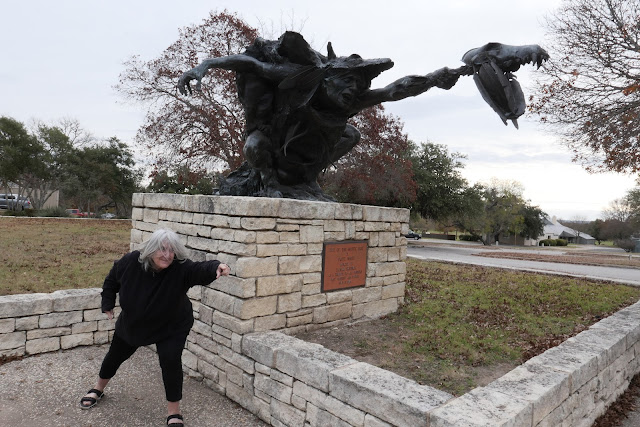 An association of cowboy artists was pondering where to build a home to store and display their art when a man from Kerrville, Texas spoke up and said he had land to spare and would they like some? Which explains why this highly rated museum is located off the beaten path near Fredericksburg, Texas, if it's near anything at all. 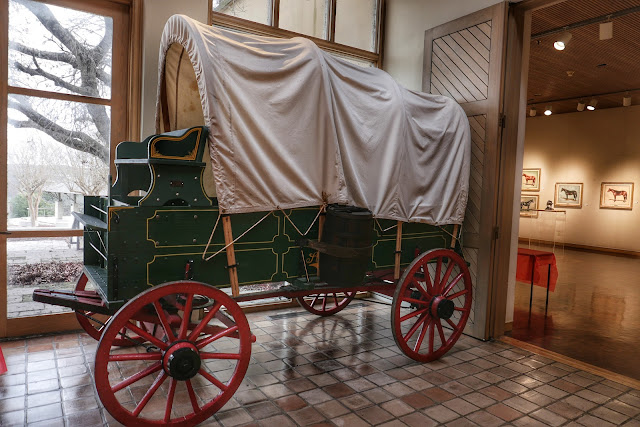 It's a building filled with art and artifacts. Take the Conestoga wagon, named for the manufacturer in the Conestoga Valley of Pennsylvania (who knew?). The pioneers called them prairie schooners owing to their white canopies billowing like sails on the horizon. As they moved at a slow walking pace to the Pacific Coast...I know there is no resemblance but I saw our Promaster when I looked at these rugged homes away from homes for those hardy travelers. 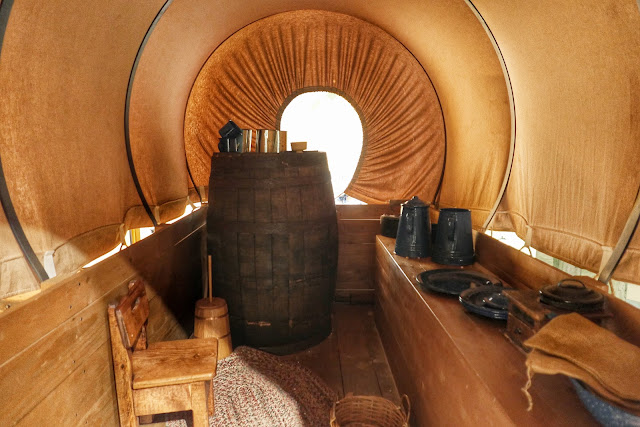 The building was created using locally sourced mesquite wood to tile the floors and the ceiling is dotted with 28 specially arched skylights built by a Mexican specialist brought to Texas to do the work. He only got a thirty day visa so work that was planned to take 60 days was done in half the time. 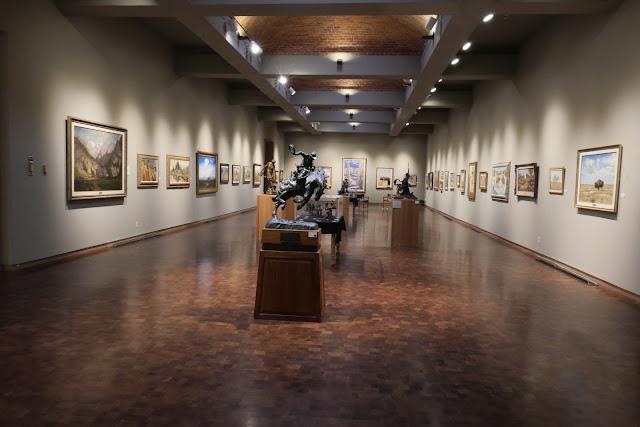 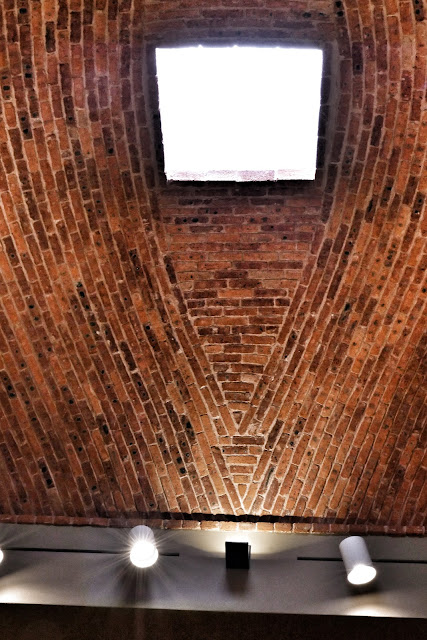 Clearly a lot of thought has gone into the design and layout of the place and they are proud of it. 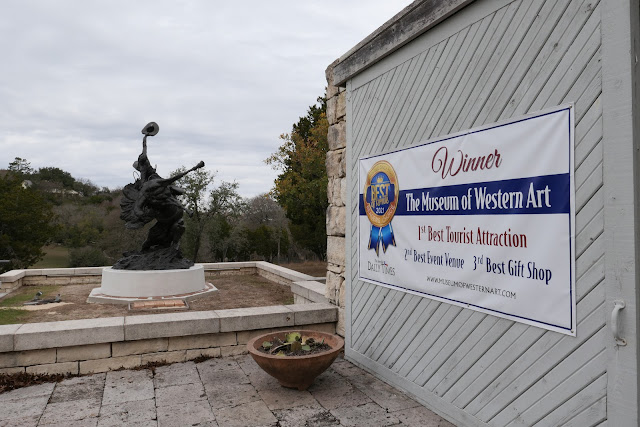 It's called the Museum of Western Art but that in the end boils down to cowboys and related scenery and paraphernalia. I included this painting, by native Texan G Harvey, in an effort to illustrate the allure of the hill country in its prime: wild flower season, the best time to visit I am told. 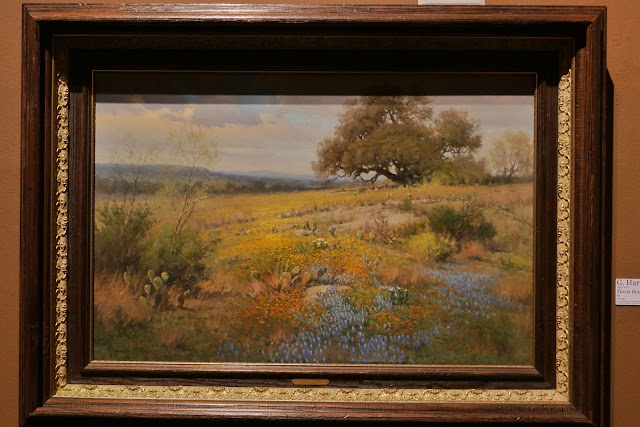 Of artifacts I was struck by the bank donation of a shoeshine bench. It screams period dress and habits, like the swinging doors of a saloon bar on the wild frontier... 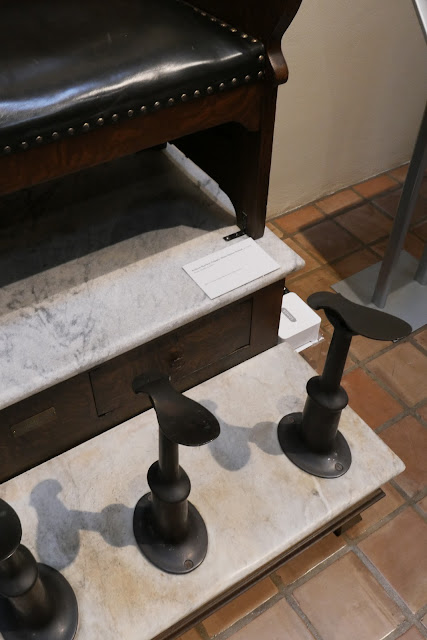 There were so many paintings, statues and items on display it was incumbent on me to try to find the ones that spoke to me. This one, below, by Fred Harman of Red Ryder comic book fame, took me back to the Conestoga wagon theme. The Italian journalist Oriana Fallaci interviewed Henry Kissinger in 1972 and in that interview he confessed to his immigrant's idea of the cowboy as a metaphor for the American experience:

She asks him how he explains his popularity. At first he declines to answer. Then he gives in to her line of questioning: “The main point arises from the fact that I’ve always acted alone,” he says. “Americans like that immensely. Americans like the cowboy who leads the wagon train by riding ahead alone on his horse, the cowboy who rides all alone into the town, the village, with his horse and nothing else.”

After being published in L’Europeo, the article is reprinted in several American newspapers and read all over the United States, where it becomes a scandal. Nixon is not at all pleased by the cowboy metaphor. Kissinger tries to deny that he has said these things, but he is contradicted by Oriana, who has a recording. 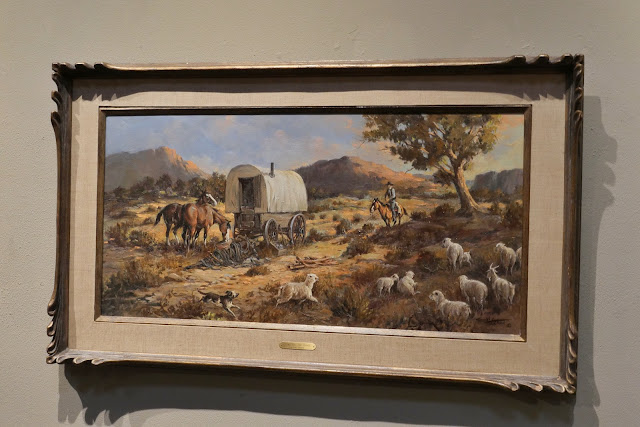 For me the wagon gives me the stability and the independence that a motorcycle never did. I love stopping by the side of the road and having lunch "at home." But the lone cowboy is the romantic image. In the two pictures below, by Joe Beeler, I was fascinated by the study on the left and the final image, so much stronger with the powerful background, my favorite leading lines: 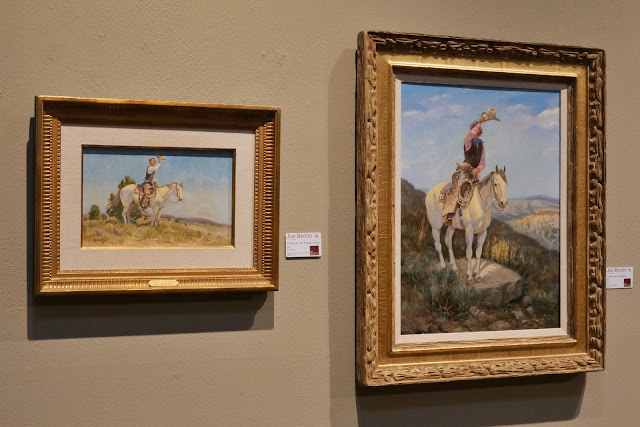 I'm not sure this painting translates well into a photograph because what grabbed me was the three dimensional quality of the red dirt. In person it was startling. Close up I saw tiny dabs of paint, red orange brown and yellow that together brought the dirt the cows were running over right into my face. Very impressive. 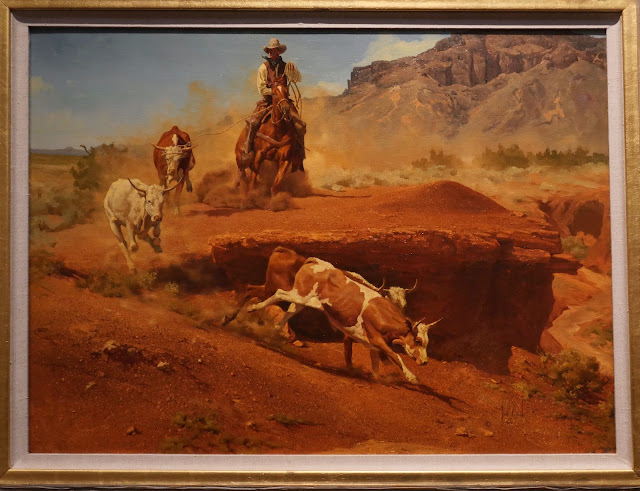 This cowboy was a modern representation, no guns, sunglasses (!) and quite fashionable at that... I loved the style of the rider, the pose, the long hair, the giant hat, the perfect control of the lasso, the ease of the posture. 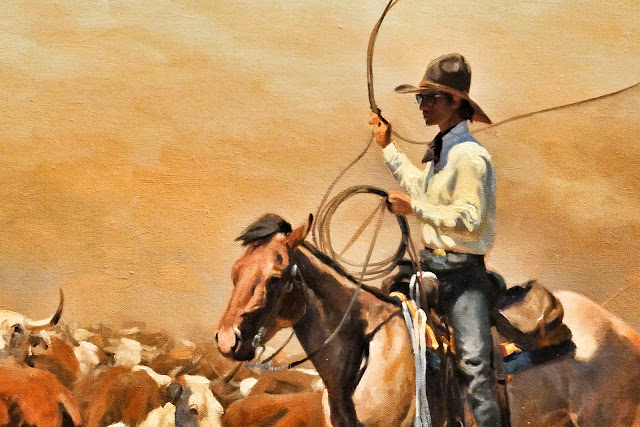 This painting below is the work of Harvey Young who studied in Munich and Paris came back to the West with what looked to me like a very European style. The light on the mountains reminds me of works set in the much less wild regions painted by British artists of the 19th century. Young had money apparently because ehe had a private rail car which he attached to trains as they went his way and which he used as his own home and studio on wheels. Not bad. 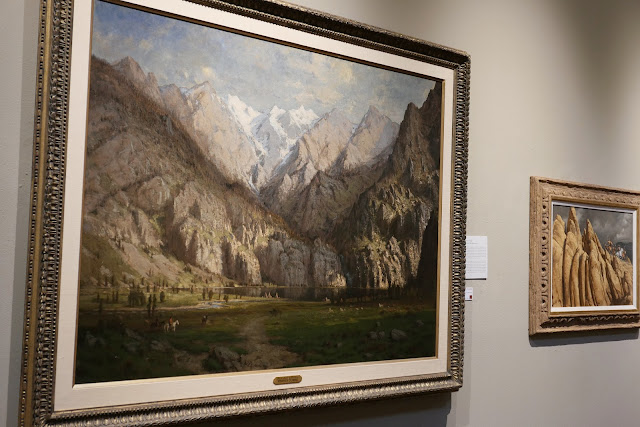 A section of the museum devoted to the education of the young tried to present a realistic view of the tough challenges of pioneer life. Fair enough. The exhibits side step the more awkward questions raised by the migration westward. Indians and buffalos are notable by their forced submission to the new country expanding west but they really don't get a mention here. 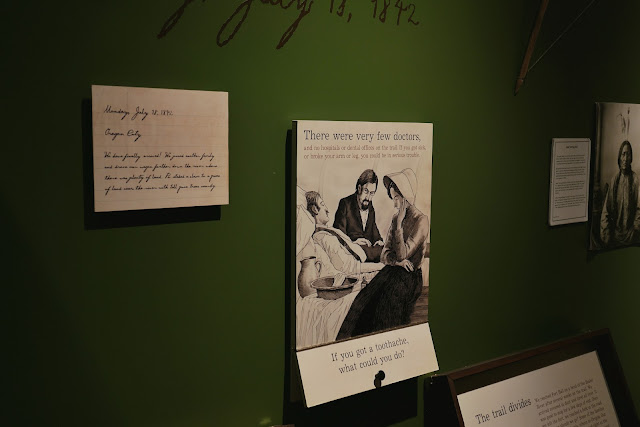 In my mind the people who took to the trail and went west bus have been desperate in their lives back home wherever that was. This was no easy journey to a place known to them by reputation. And as far as this exhibition space goes that's enough. 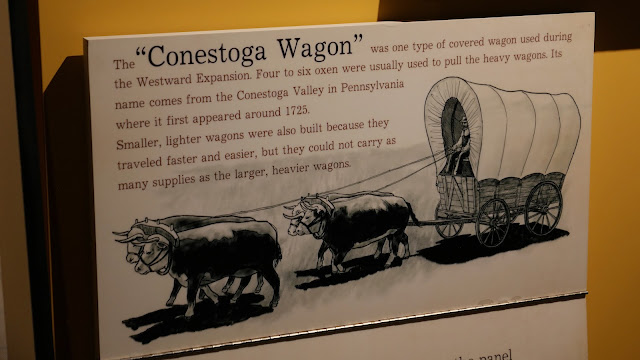 What I like most about the museum is the recognition it brings to a group of artists not well known or often shown. Frederic Remington is who we the general public know about, vaguely, but the others? It's really nice to see this art in this place celebrating a time and a place and a romanticism that lives in us to some degree today. Rolling across Texas in my covered wagon I spend time behind the wheel thinking about covered wagons taking all day to cover ground that took me half an hour. 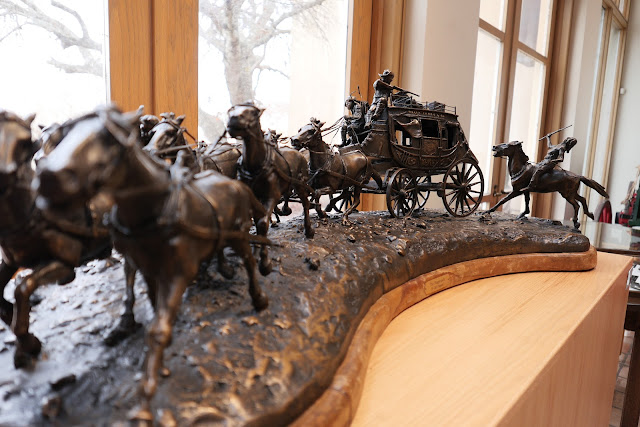 Hunting for the answer to my own question about the respectability of "cowboy art" in the art world I came across a great article published in 1987 in The Oklahoman and still to be found online, about an exhibit of western art in Paris of all places. 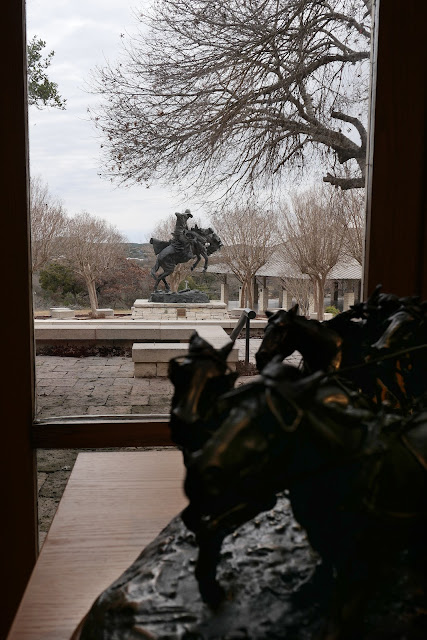 A section from that article:

“But even in a country that invented the expression avante garde, it seems that everything old can be new again.

Jean-Claud Farjas, an artist with a painting hanging in the exposition, said: "I love it because it's painting that will come back to fashion. It's an honest kind of art."

Anore Jacque Min, a member of France's Legion of Honor, which admits only the most respected artists, went into more detail on the subject.

"I think that in the American painting of the West, the structure or construction of the landscape and personages are very special and characteristic of much of European paintings.” 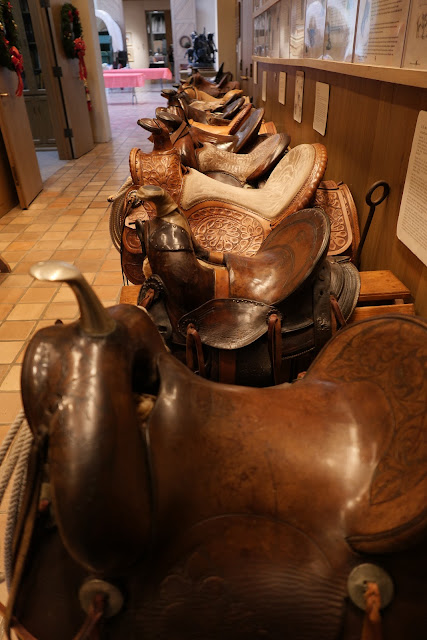 I could have spent half the morning looking at the row of western saddles on display. Personalized, obviously loved in a way that goes far beyond the utility of a tool needed to ride a horse. The pommel reminds me of a cleat on a sailboat, used like the pommel to secure a line. 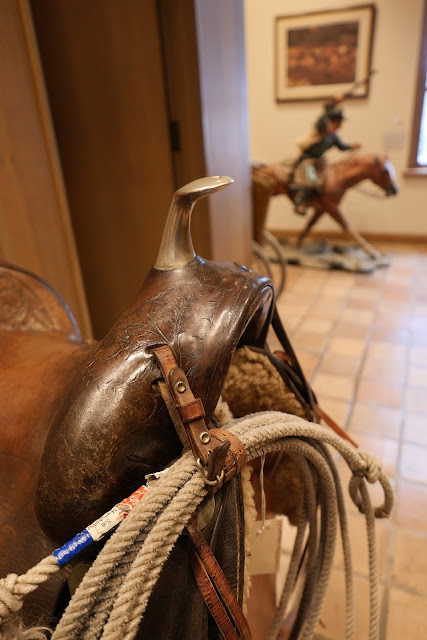 And then there were a couple of high class models, a stage coach and a chuck wagon. Amazing. 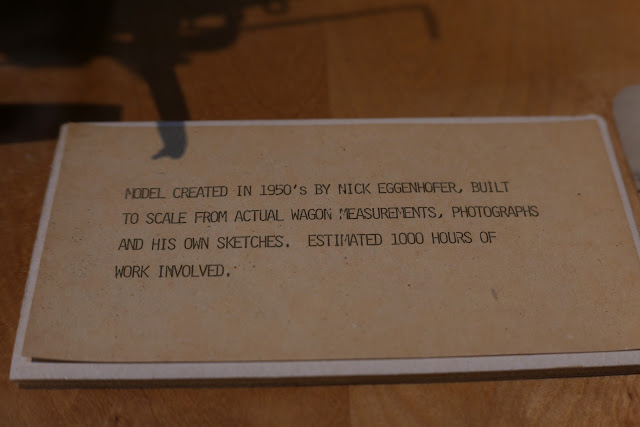 Nick Eggenhofer. was born in Bavaria. in 1897 and worked out of a studio in Wyoming. There is apparently a huge desire for cowboy stories in Germany, and in Italy when I was a child we loved a comic book series, still published about the adventures of a Texas Ranger called Tex Willer. 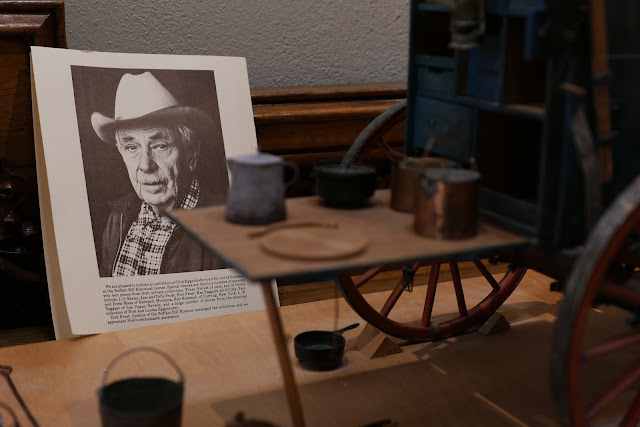 I look at the chuck wagon model and think of the modern small camper trailers with kitchens built into the back offering an open air kitchen for campers who manage to sleep inside the tiny confines of the small tear drop trailers. 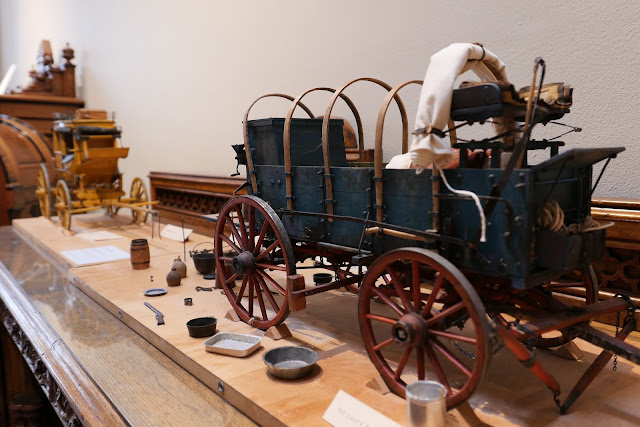 Looking at the stage coach I saw for the first time the structure of these machines, a flat ox cart frame underneath with the carriage body suspended on suspension above it for the comfort of the passengers. Brilliant. 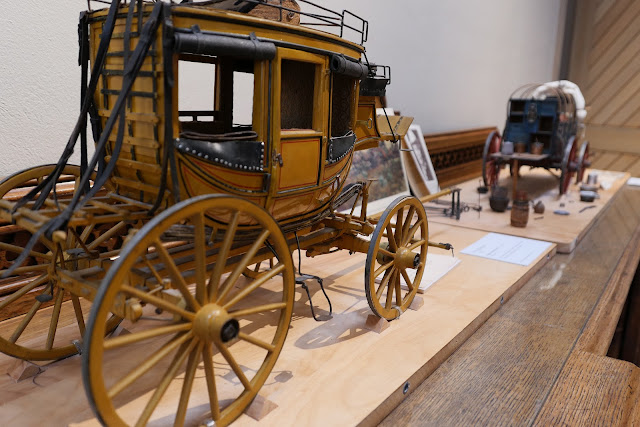 Well worth the time to visit. 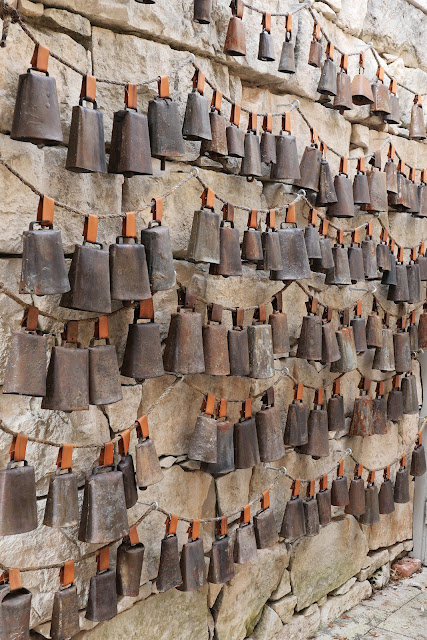 Rusty got his time around outside. It's a weird setting for a museum. It's plonked in the middle of a country club, between a swimming pool, a golf course and a bunch of private homes. 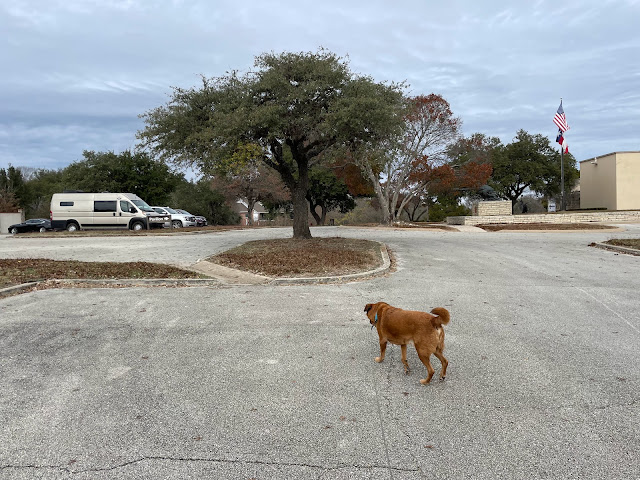 We took off across country again and happened upon a lunch spot, underneath a raised portion Interstate 10. We got a bit muddled in our mapping and pulled over. As always Rusty wanted to get out when the van stopped. 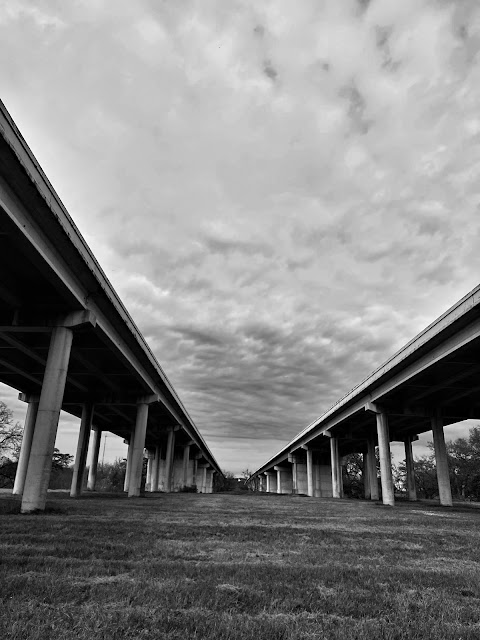 Layne said this looks like a good spot for lunch. Thats what I mean about traveling by van. You have your home wherever you are. A prairie schooner. 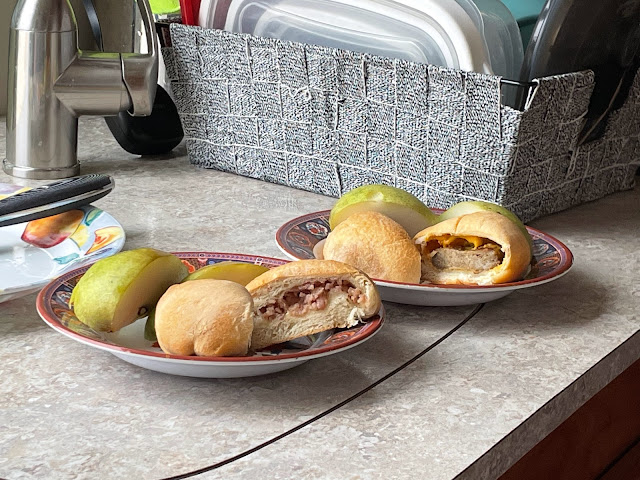 In this instance lunch was a couple of Czech savory pastries from Austin. Kolaches they are called, pulled from our fridge and heated in our microwave. Easy. 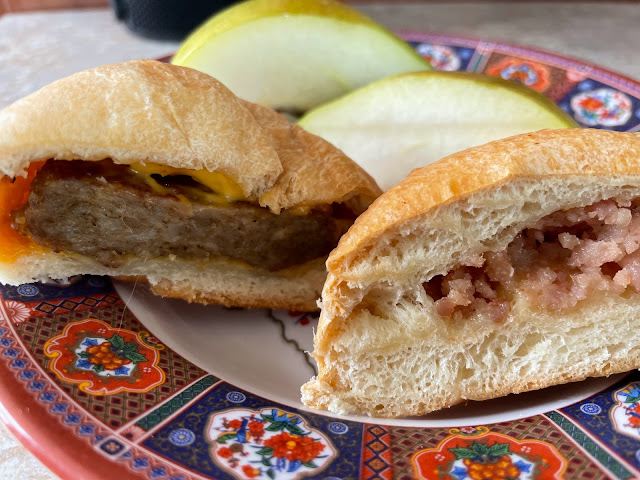 Lunch where you want: life on the road. 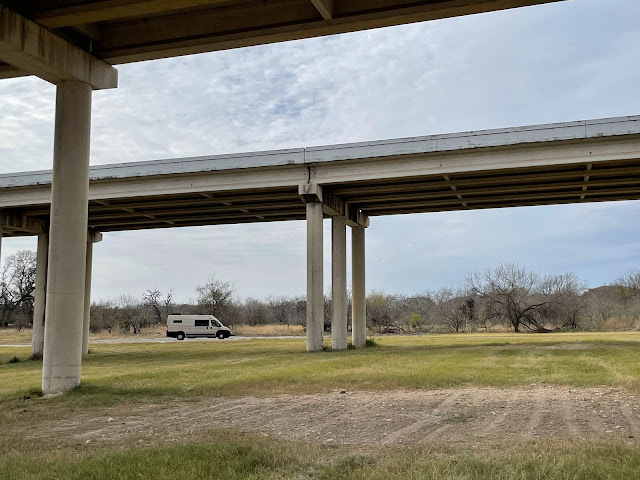 Posted by Conchscooter at 7:59 PM 9 comments: