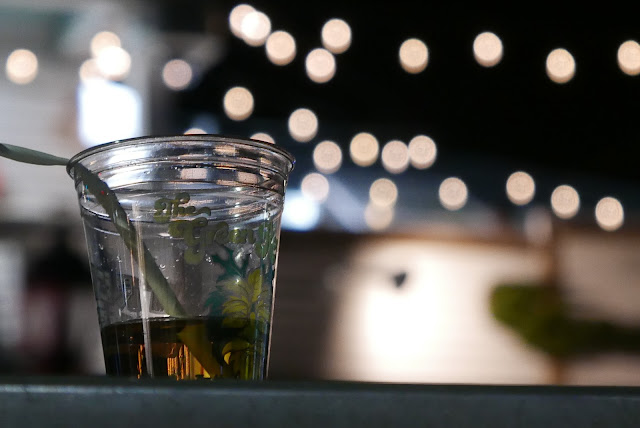 I love Key West before dawn and I always have even before the pandemic introduced us to the curse of mandated social distance. In the old days when people mortgaged their homes for play money, when debt was good and on offer free with your morning cereal the bars of key West used to stay open and busy until four am, the maximum permitted hour to sell alcohol. They struggled to push patrons out the door back to their expensive fully booked hotel rooms. Duval Street looked like the victim of an explosion in a brewery after the patrons wandered off dropping their drinks as they went. 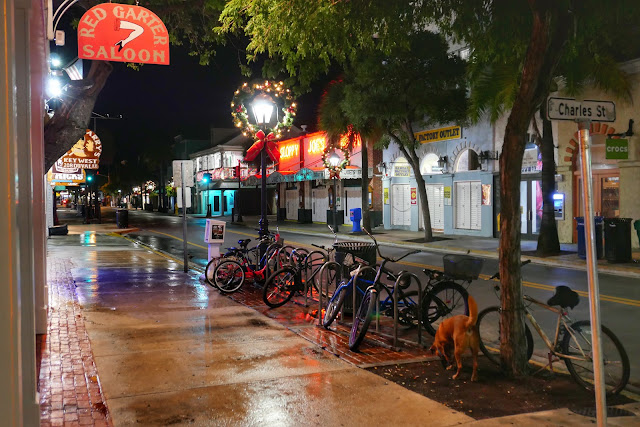 It was my time to walk the streets, after the bars finally closed and before the commuters showed up around six in the morning and Cheyenne and I took to crisscrossing the city while everyone else slept. Rusty likes to do the same only he likes his routines and only enjoys walking certain areas over and over again which I do find repetitive but also challenging. Luckily the end of the year is producing some of the old drunken derring-do to give city clean up crews at least a little work. 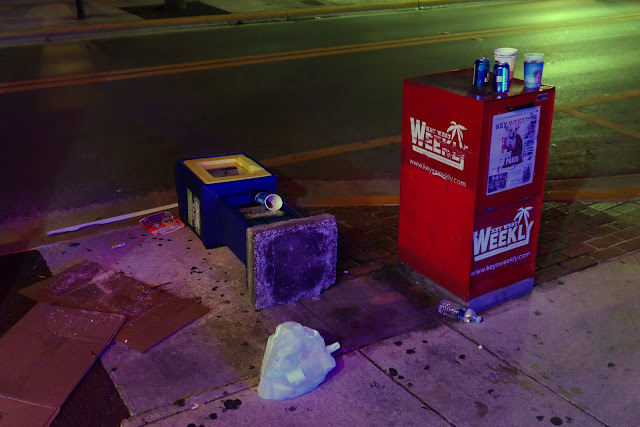 Activities galore but in case there were any doubt there is a no trespassing sign to discourage the residentially challenged from finding refuge under the counter. The city has a 24 hour shelter on Stock Island, air conditioned dormitories with showers lockers and a mail address used by the working poor, people without the five thousand dollar deposit needed to move into a  modest  living situation. Some homeless do live at the shelter now known as "Cornerstone" but others prefer the freedom of the open road and take up lodging more or less secluded around town  in spots they hope won't generate complaints. 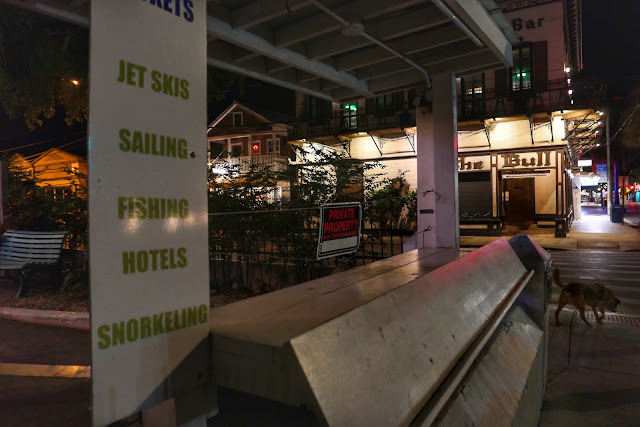 Key West means so much to so many and in all different ways. I used to wonder why people who said they wanted to live here didn't do so. That was when I discovered some people don't need plans, they need fantasies and this peculiar place fulfills a need to dream. Others try to make a go of it and confuse vacation time with work time. If you want a job here all you have to do is show up consistently and don't trip over your own tongue. The difficulty is that you will probably need three jobs to sustain life which leaves no time or energy to even pretend you are on vacation here. Its a timeless problem, once solved by cadging a life in Key West, but nowadays the wealthy don't tolerate weirdos and hippies and charming drunks so the barefoot in paradise fantasy has definitely sailed away. 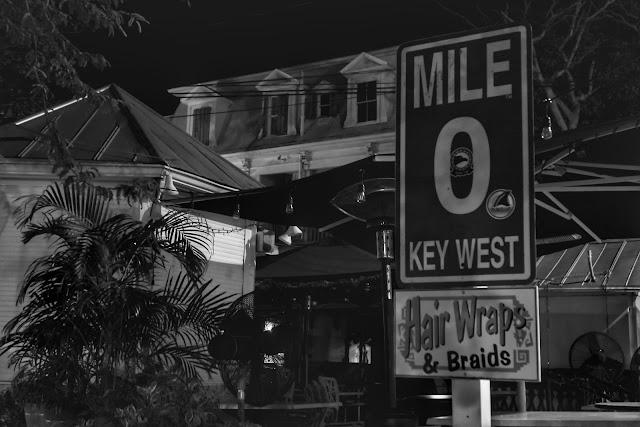 Coronavirus has done profound but probably not lasting damage to the party forever image promoted by business interests. It can be awkward living in Key West and being seen to be a feckless stoned public nuisance and its  a stereotype that I must admit does irk me. There is so much more to key West than bars on Duval but my wretched dog loves this part of town. If I take him to my favorite walking streets, Southard and Fleming, he walks a block and then goes back to the car and sits by his door waiting for me to transport him to the real event. 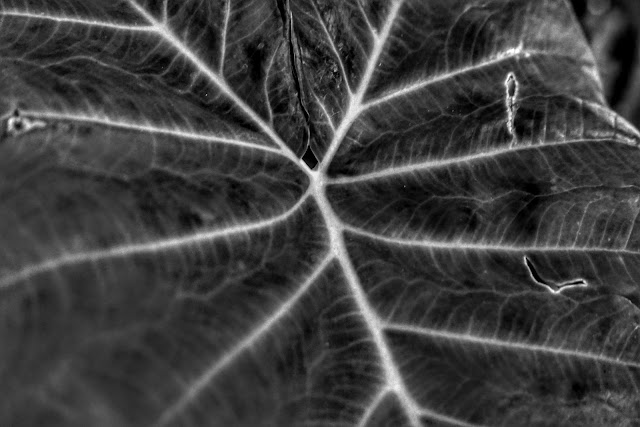 My morning start to the sound of clacking nails on the tiles in the bedroom. Then I hear a Carolina Dog doing its yawn, his way of attracting my attention. He walks back and forth for a while then goes into the kitchen by the cookie jar than comes back to the bedroom and clicks and clacks his way round my side of the bed. If its before four am I tell him to bugger off but if its after four I stagger off to stick my head in the basin and wake up. He gets a chicken strip from the jar and takes it through his dog door to the deck. If  I am too slow he starts the yawning routine again until I meet him at the top of the stairs. 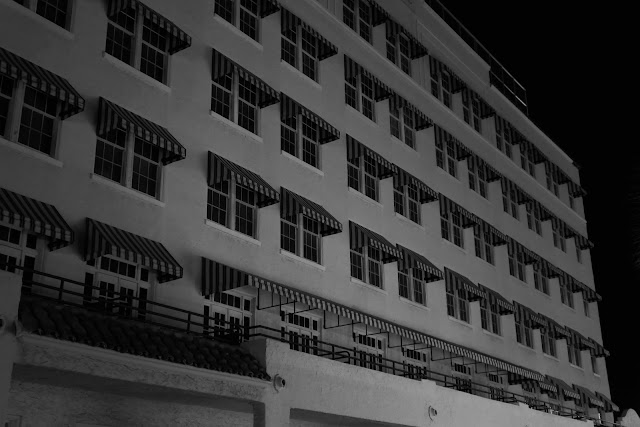 When the car gets over forty miles per hour he curls up on the back seat and I close his window and we make tracks for one of three spots in the city. His routines don't vary which is why he finds van life rather exhausting. We go to the parking lot at the fire station on Simonton Street, or in front of the Waterfront Brewery, or Eaton at Duval next to Wendy's and then I follow him. 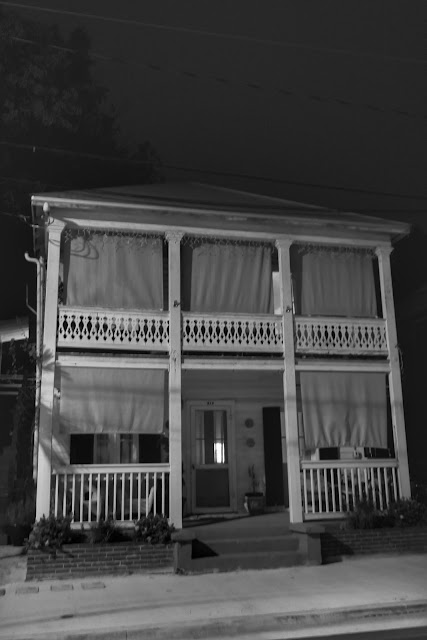 Rusty's Key West is a place of wonder, after four years of crisscrossing Old Town he never fails to find spots of interest. 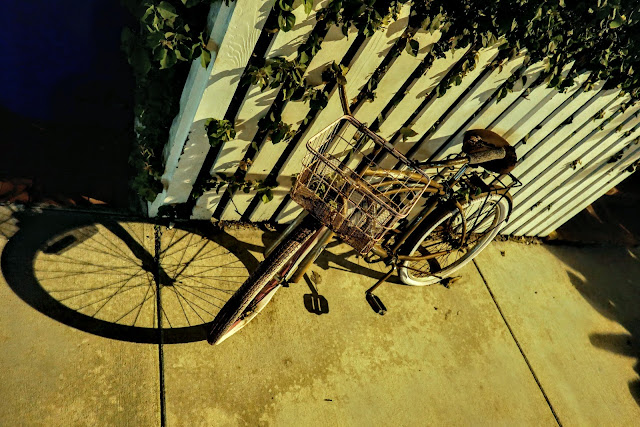 The pandemic has reduced the circle of all our lives, some more others less. For Rusty life continues pretty much unaltered which may be an indication of the limitations of dog life. He seems to hold no resentment. Indeed he is an example to follow, as he exhibits no pride, seeks out no confrontation and avoids those we used to describe as "vexatious to the spirit." The few people I do meet on the street ignore us or occasionally seek out the comforting touch of a warm dog and if he judges them bearable he lets them approach otherwise he skips away and I follow his example. (Me skipping is a sight to be seen). The best thing about the silent lonely walks in the dark is learning to follow his example. If I have to be awake I might as well learn something, even if it is just from my dog. 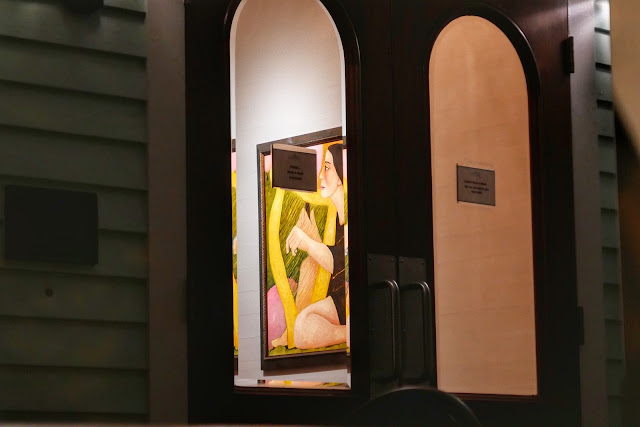 A gratuitous Rusty photo which Webb Chiles says are never gratuitous but then Rusty is perfect and I'm not...obviously. I posted this on Instagram titled Rusty in Garlands. 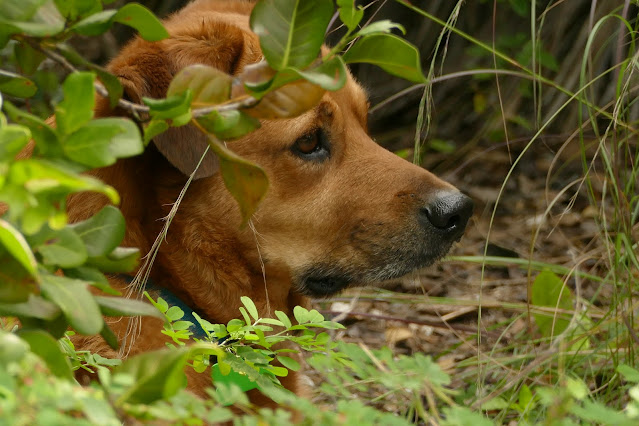