Friday And A Movie

I was quite pleased to see mine was not the only classic Vespa in the lot when I stopped on Eaton Street to check out a movie at the Tropic. IT appeared to be a 2005 P150, a rather slower version of my white 200, but in a sea of scooter conformity it was nice to see. 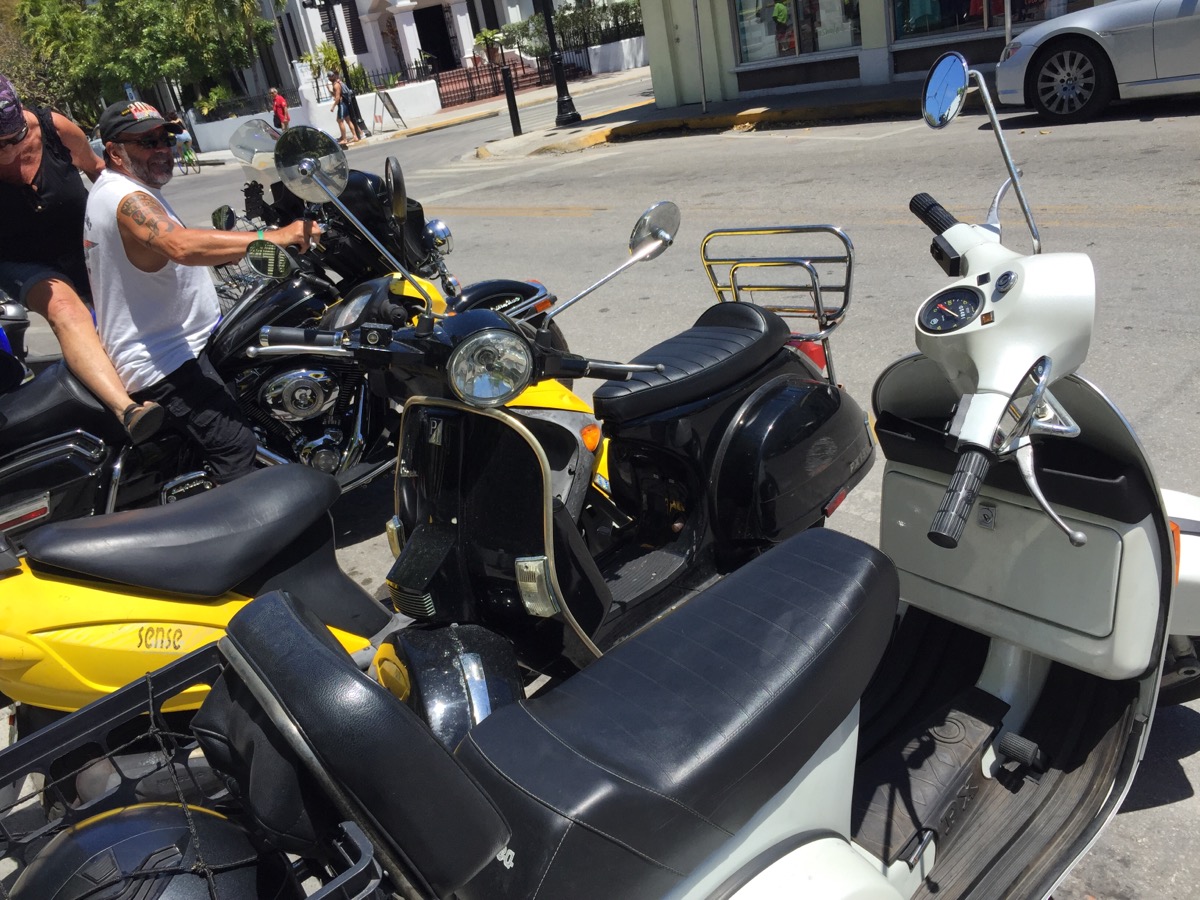 The movie I was going to see was Seymour: An Introduction directed by the actor Ethan Hawk and recommended to me by my wife. She was correct. I like a good documentary and this one, about which I knew nothing, got me thinking about life in ways few movies do. I came out of the cinema, back into daylight with my mind in a ferment. I am certain I will have to see this again on Netflix but I fear the effect of being in a large dark room with no distractions may be impossible to recreate in my living room at home. Seymour, a piano teacher has grasped the fundamentals of life, living alone as he does in a tiny New York apartment. The room is a refuge as well as being a classroom which he uses to draw in his pupils from the outside world where once he was a successful concert pianist and from which he is now a detached observer. 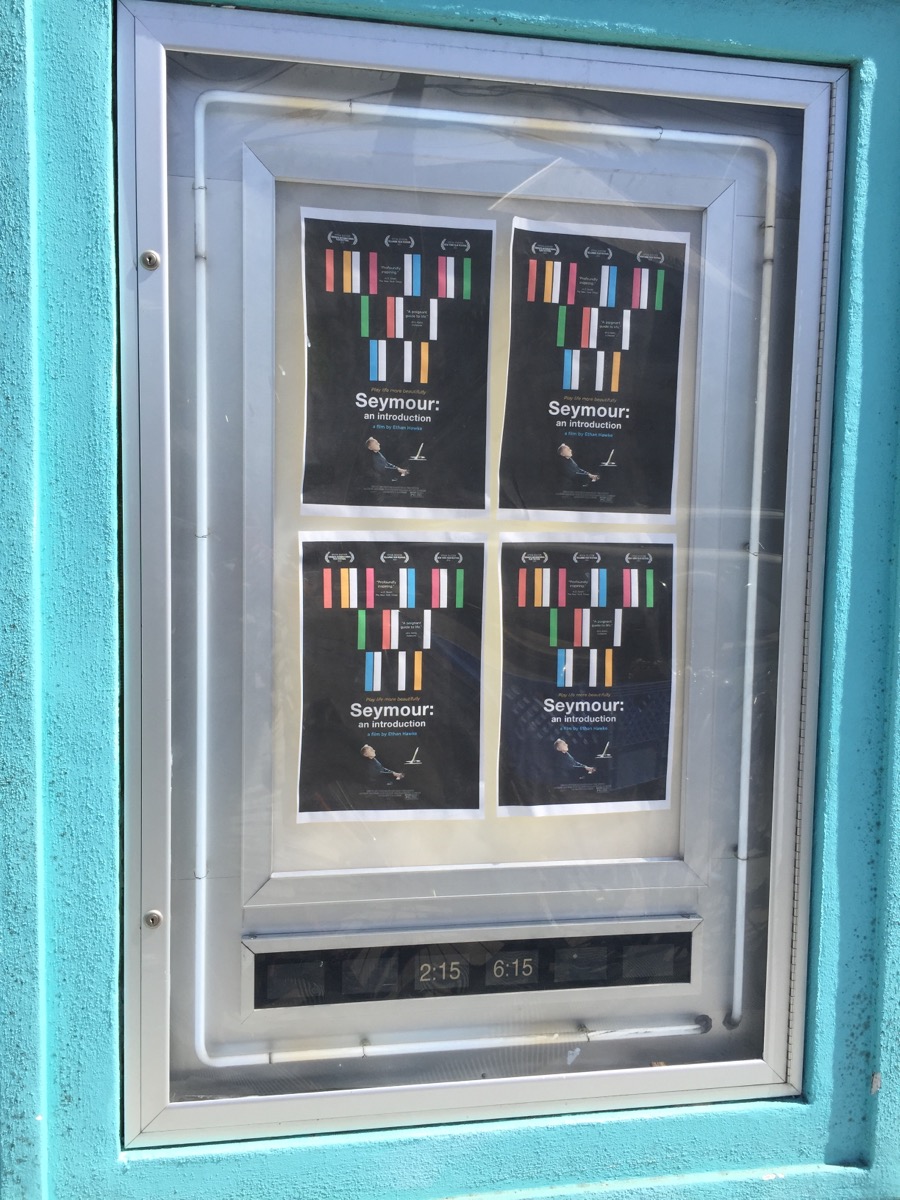 I did not do so well when I arrived at the cinema ready to present my membership card, ready to give money and ready to be entertained into thinking. There was a slightly anxious volunteer at the cash register, most likely busy still mastering this trade masquerading as a retirement pastime, and I should have noticed. She asked me what I was there to see.
"I want to see more piano playing," I said, punning brilliantly. She was not amused and  all I did was fluster the poor woman."You want to see..?"  I bought a bottle of water as penance and retreated to the darkness of the screening room with my hard fought ticket. 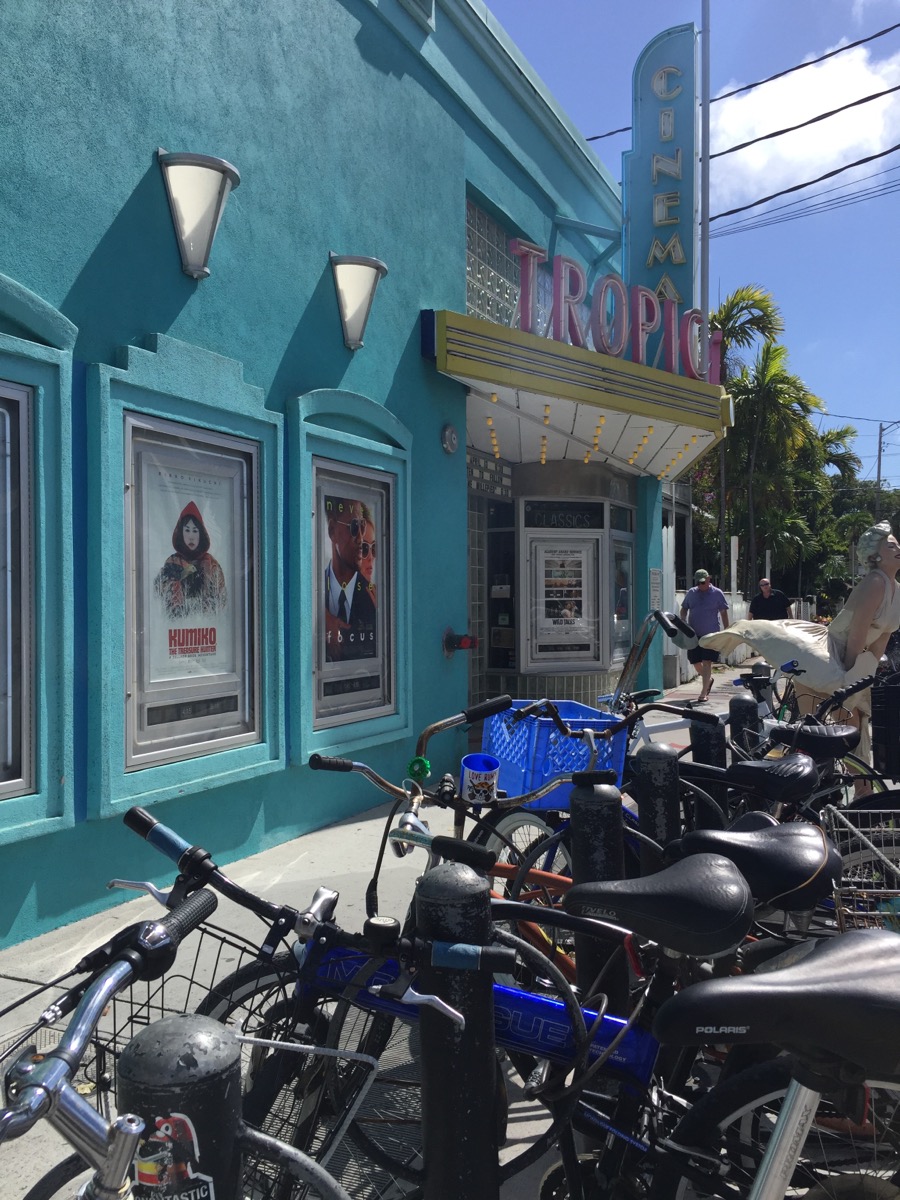 Sauntering out into daylight, rejoining the world I saw the Vespa pulling away down the street and I took a picture as fast as I could fat finger the camera. Then the Vespa sputtered to a halt and I trotted up to say hello, at a not auspicious time. She kicked it a bit and then gloomily announced to the sex starved Harley riders in attendance that she had run out of gas. Her gauge was broken. An announcement that doesn't  cut much ice with me as I have no gauges on my Vespa of any kind. 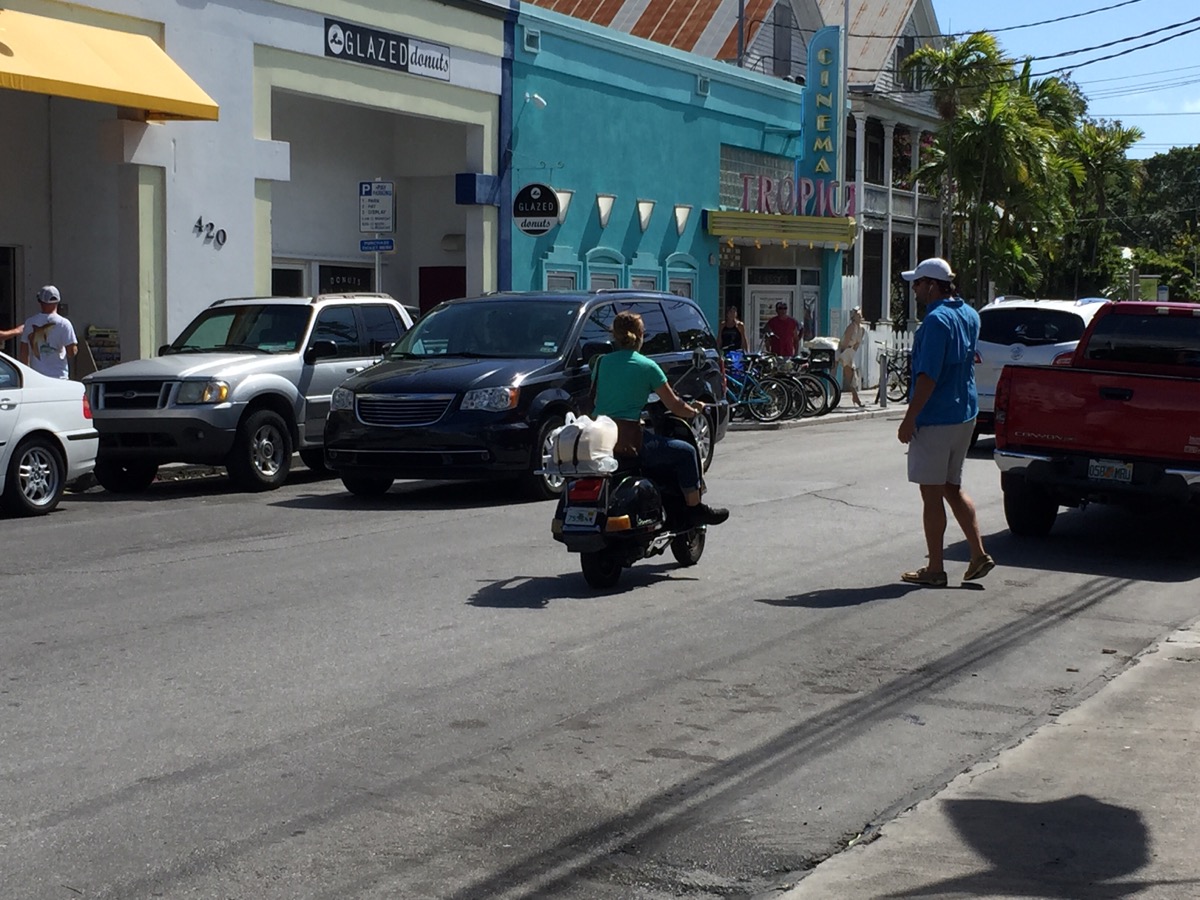 She said she was in a hurry and I backed away after I got the stalker vibe from her. I wonder sometimes why some people end up with vintage or fumbly old fashioned machines in a world filled with convenience. I mean it takes a bit to choose a scooter with gears and a kick start in a world filled with modern ease of use. Yet perhaps in other circumstances her old school ride gives her the joy I get from mine. It didn't seem like it under those circumstances but as it was I seemed to be out of sync with the world around me so my retreat seemed a good idea. 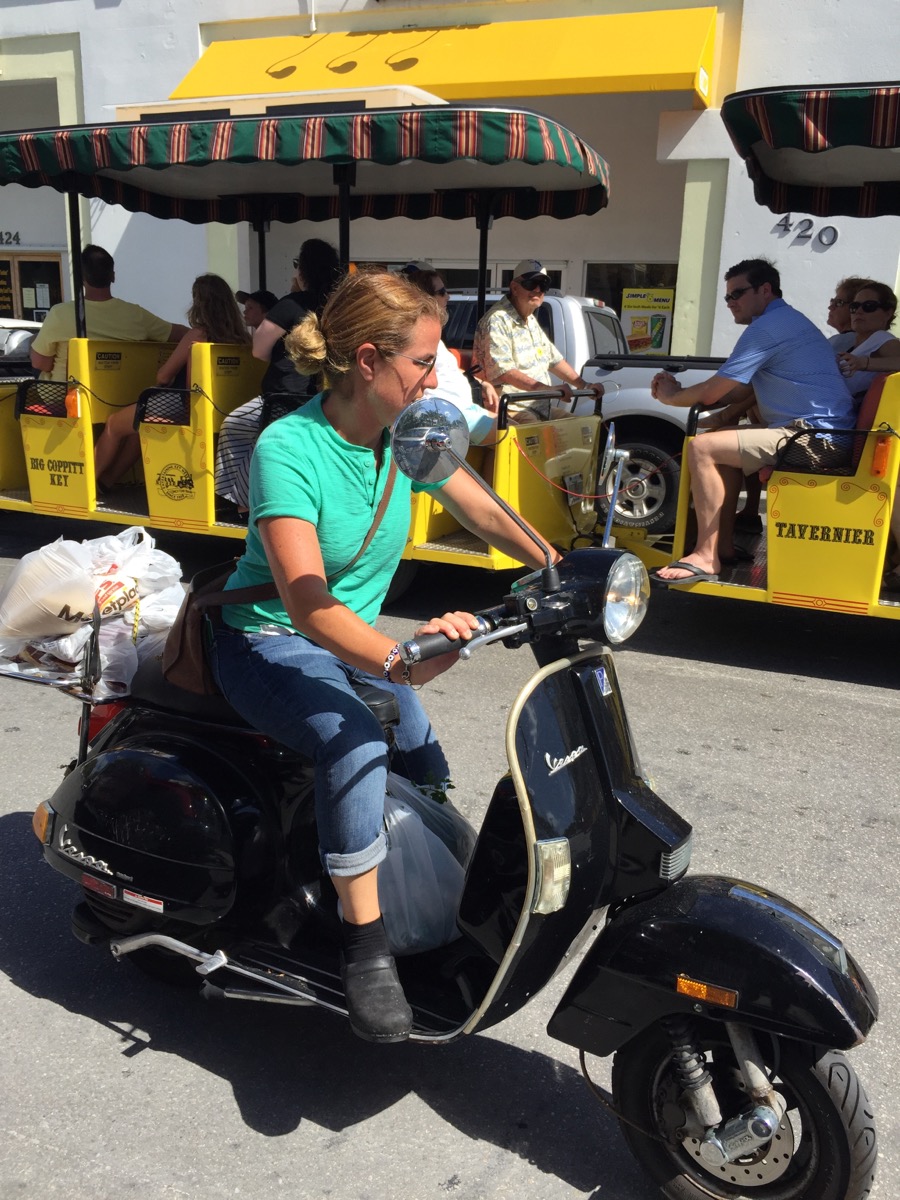 By then my gas-filled scooter was sitting next to this swoopy silver thing. A Harley customized to within an inch of it's life. I was caught admiring it by the owner who swaggered up flipping his keys in his hand. 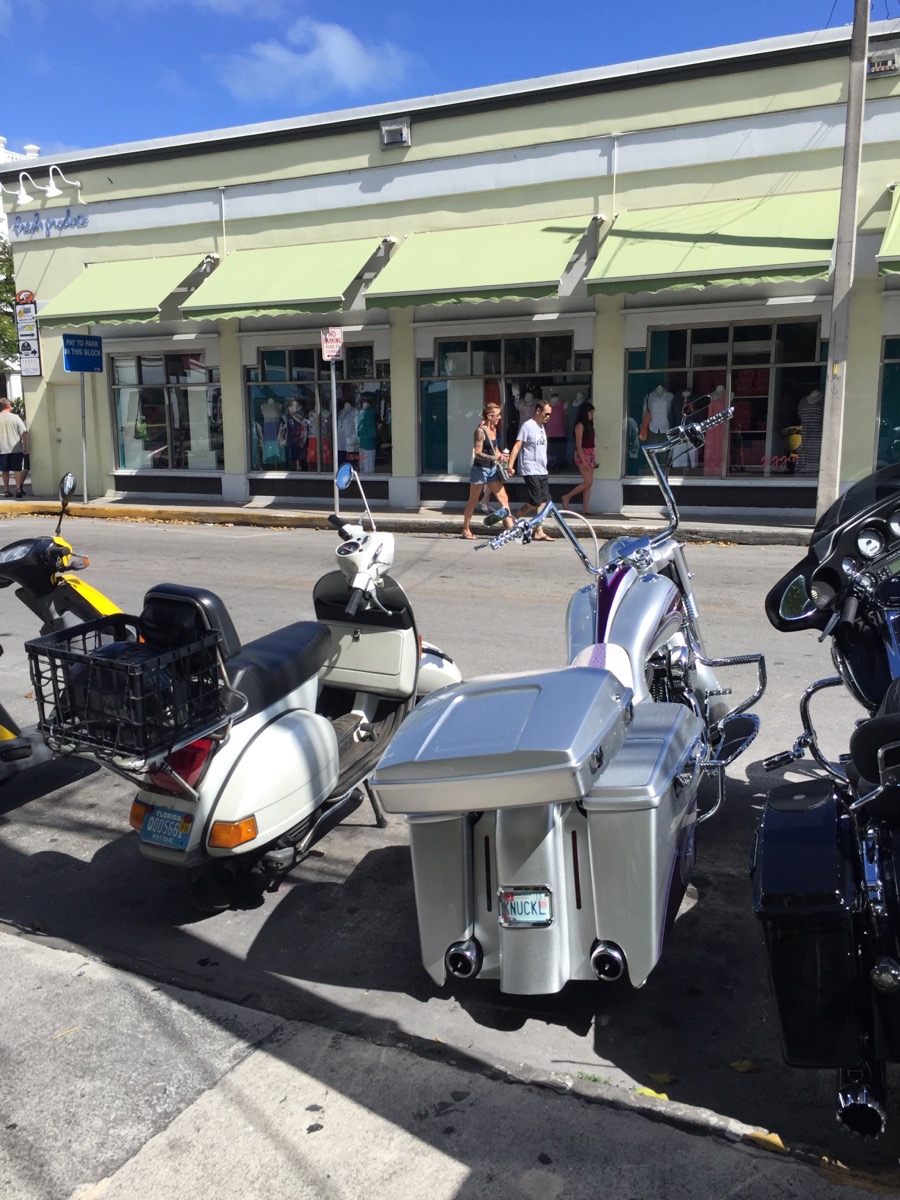 The dude with the yellow cap is working on customizing the black Harley Davidson in the picture below, the guy behind him trying to avoid the camera has been caught up in the business of chromium plating the silver one for a few years. Suddenly my day looked up as they told me their story of coming down from Baltimore to escape Spring in the forties (brr!) and they took a day trip to Key West on their rumbling monsters. 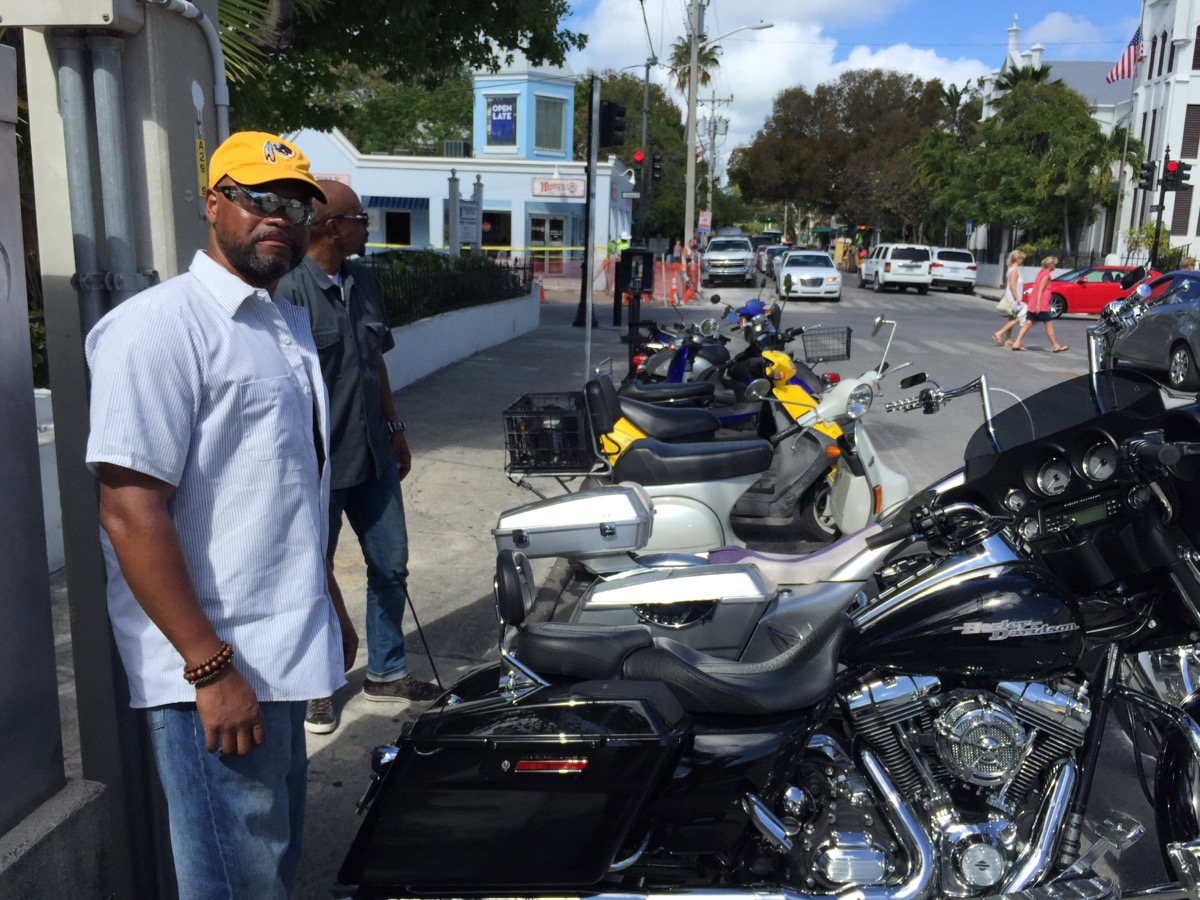 They went left and I went right to seek out a geocache on my way home. I saw some scooter renters admiring the Harleys lined up behind them at the light at Duval Street and then I was gone. On my way to mid town I passed the new city hall construction at the former Glynn Archer School on White Street. The stately building is being gutted to make way for a new city hall at a cost they say of around $20 million. The refurbishment is becoming a political issue in the election for mayor as  cost overruns may be on the horizon. Already the city has had to shuffle its accounts to put one and  a half million into the project that was not previously budgeted. While I appreciate the science of numbers, and the dismal science of economics, I think Key West will benefit from a municipality worthy of the town. Too often in Key West things are done shabbily and with a fearsome lack of vision. I think Mayor Cates has done a good thing pushing this construction job, and I trust it will become a symbol of beauty and solidity in a city that sometimes seem to dedicate itself to short term profit and shabbiness at the expense of the long term view. 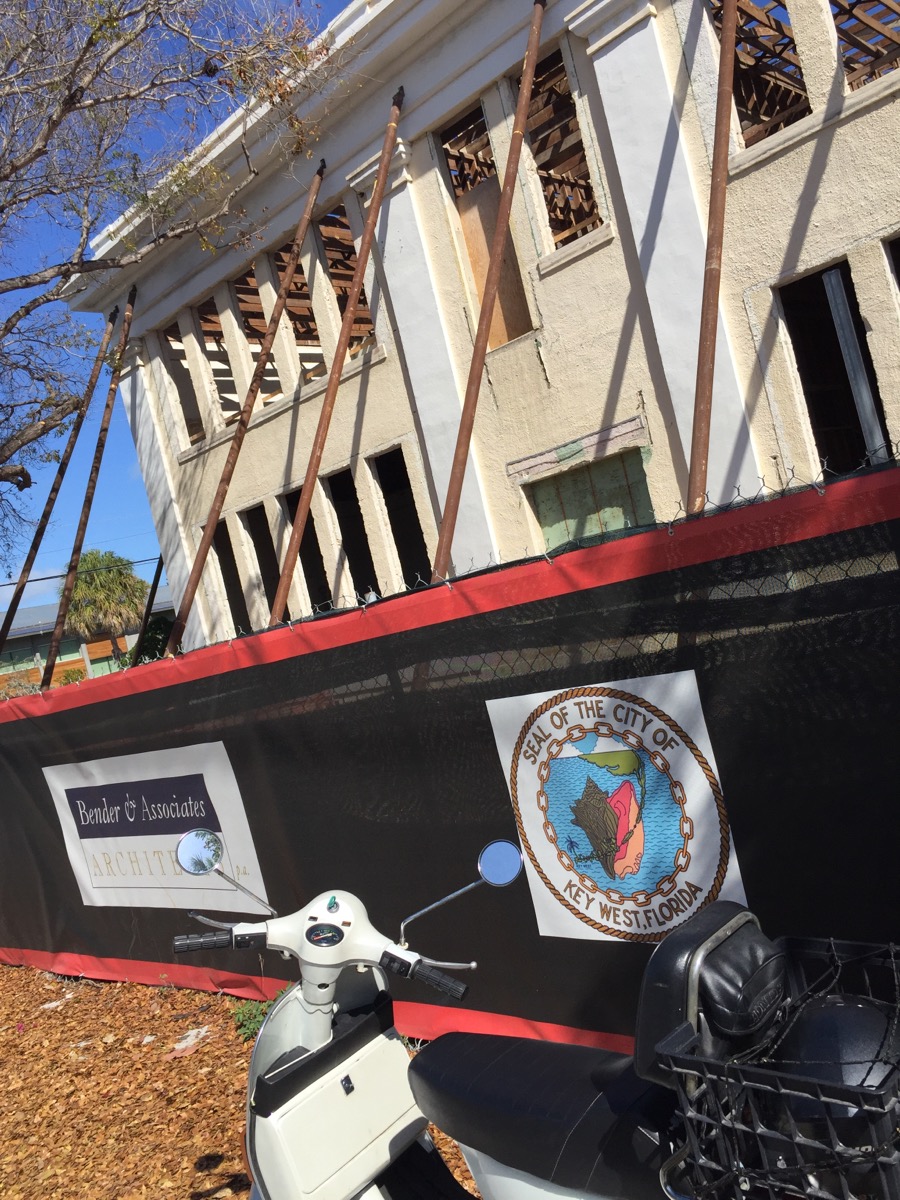 I didn't find the geocache on my first visit, I rarely do, but I appreciated having my attention drawn to this magnificent buttonwood tree on Seminary Street. It's still there somewhere, the little camo box and I shall find it one day. 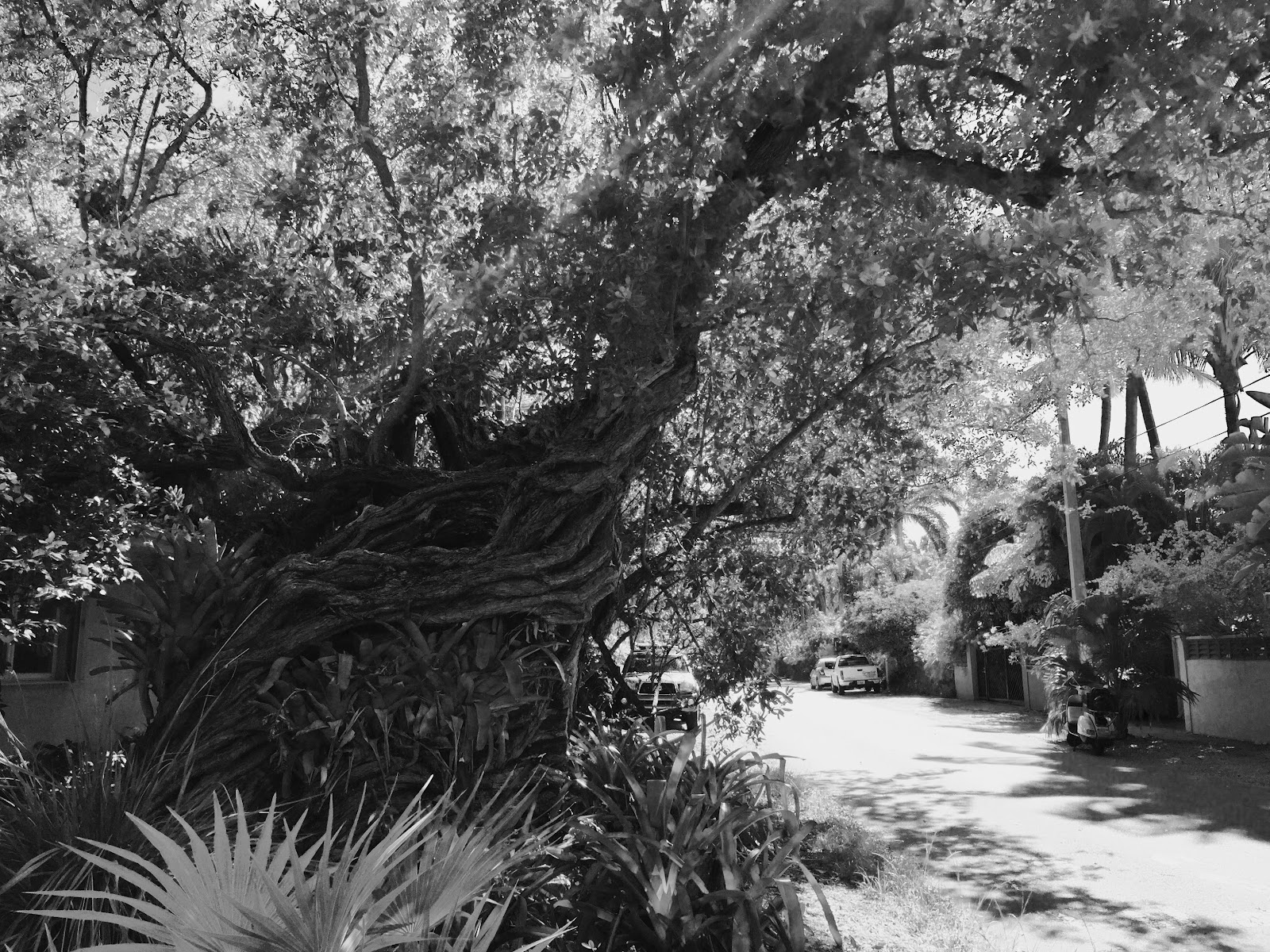 I like that picture of the gnarled buttonwood. It expresses to me the promise of heat and torpidity of summer that will soon be upon us. Actually I think a lot of people find that to be the case already but to me 82 degrees is not summer when there is a fresh cool breeze blowing and my clothes don't automatically stick to me when I step outdoors. That I relish and it will soon be here. Swimming season!
Posted by Conchscooter at 12:00 AM No comments: Links to this post