We left the home parked at the winery by prior agreement between my sister-in-law and the winery with whom she has  a more than passing acquaintance. Instead we took a day long ride in their Toyota Prius a vehicle in which I have never previously spent a day riding around aboard so it was an instructive day. Our target was the rocky pimple you see below called Pilot Mountain. 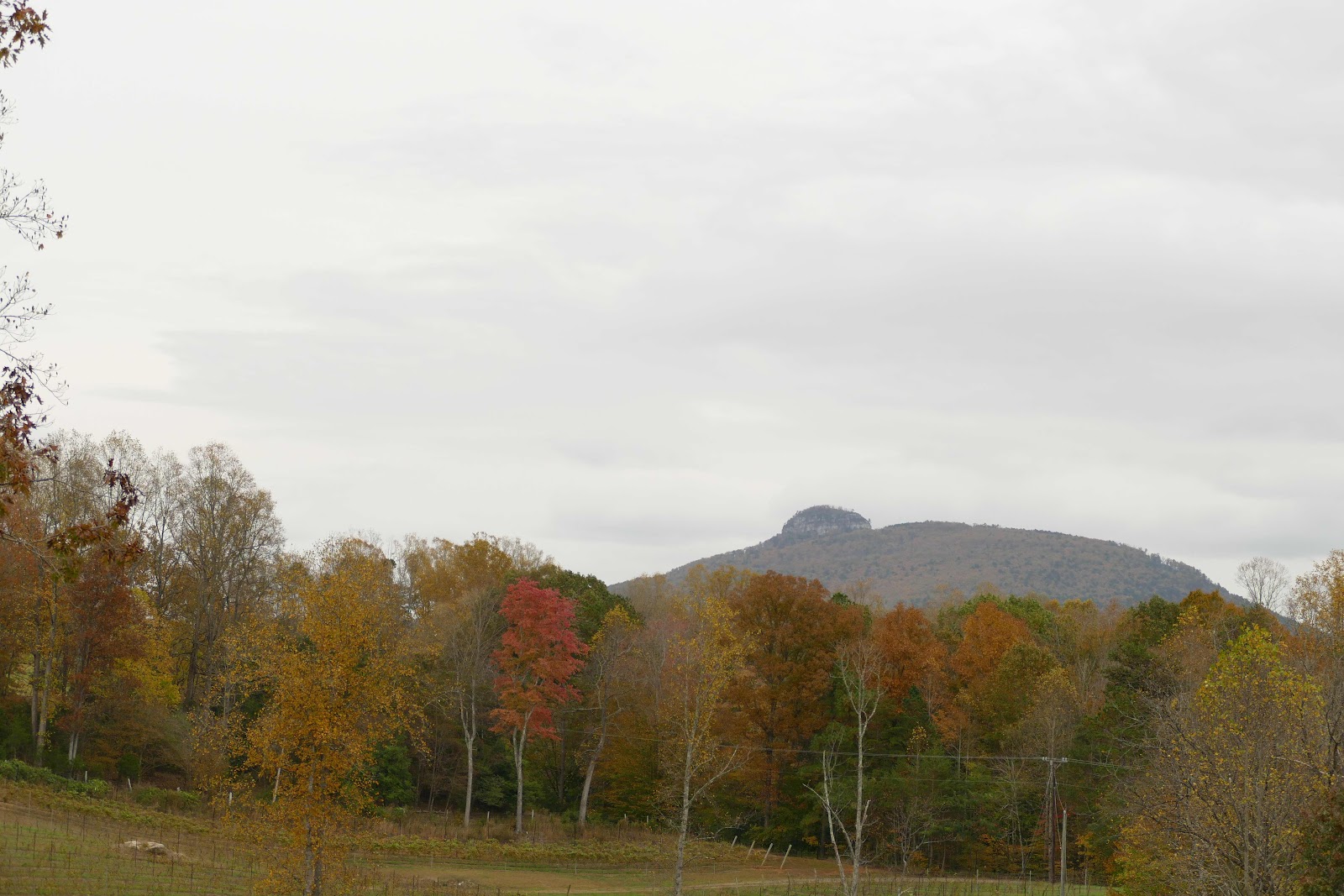 Before the mountain there was the river to cross, a river of wine in this case. Yadkin Valley is home to numerous wineries many of them advertised alongside the freeways that cross the area. The notion that wine can only be produced in California, Oregon and Washington  is long out of date and we have stopped by vineyards in Texas, Vermont, and New York and places I can't even remember off the top of my head. 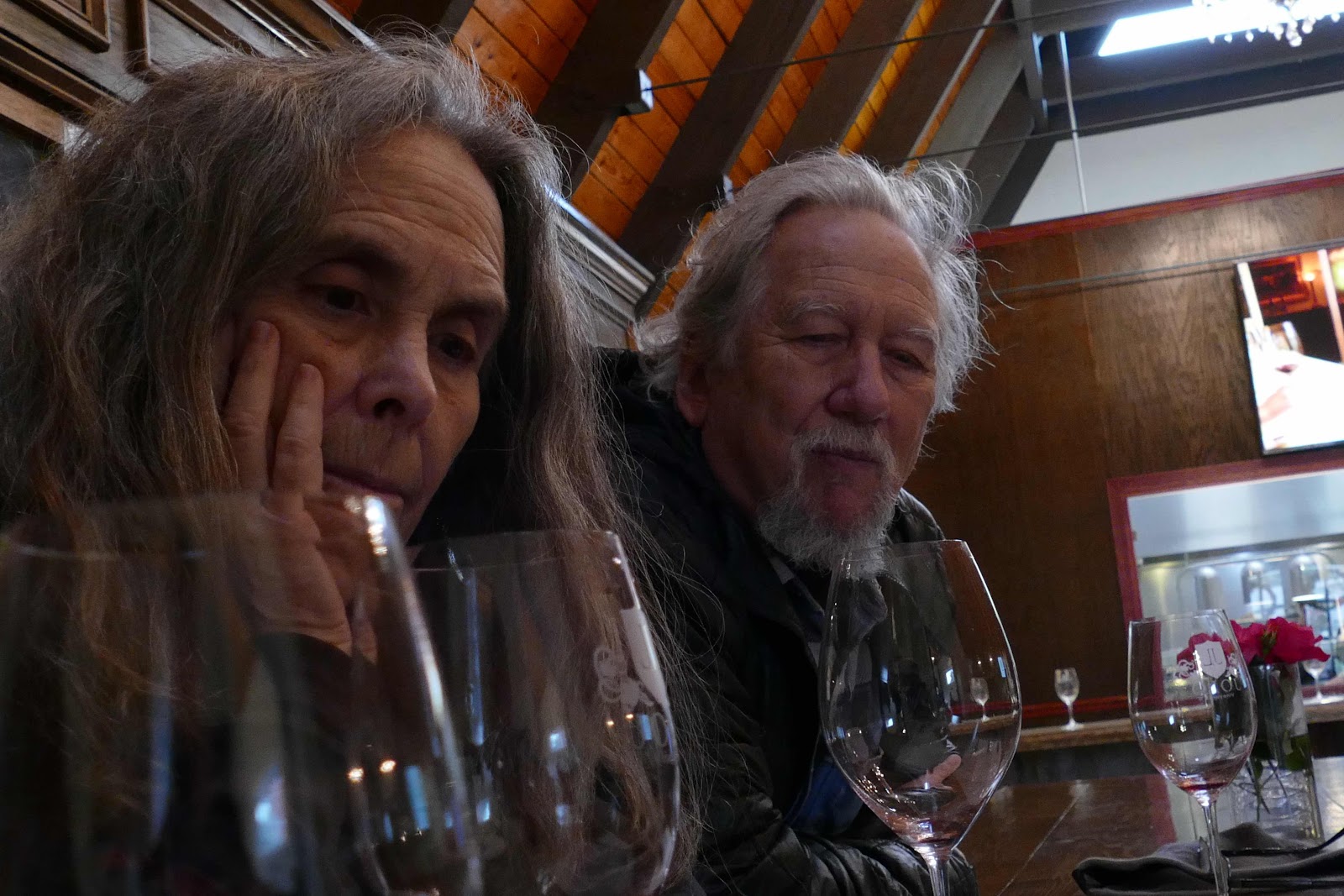 Geeta and Bob are avid oenophiles and they study the form like baseball addicts. Like most things in my life I know what I like even if I'm not sure why and with wine, or beer, I seek out that which makes me happy. A puckered tongue, a bitter taste or similar does nothing for me. I know how to do the wine tasting nonsense of swirling and looking for legs and measuring sugar and all that stuff. In the end it's the taste that works for me. 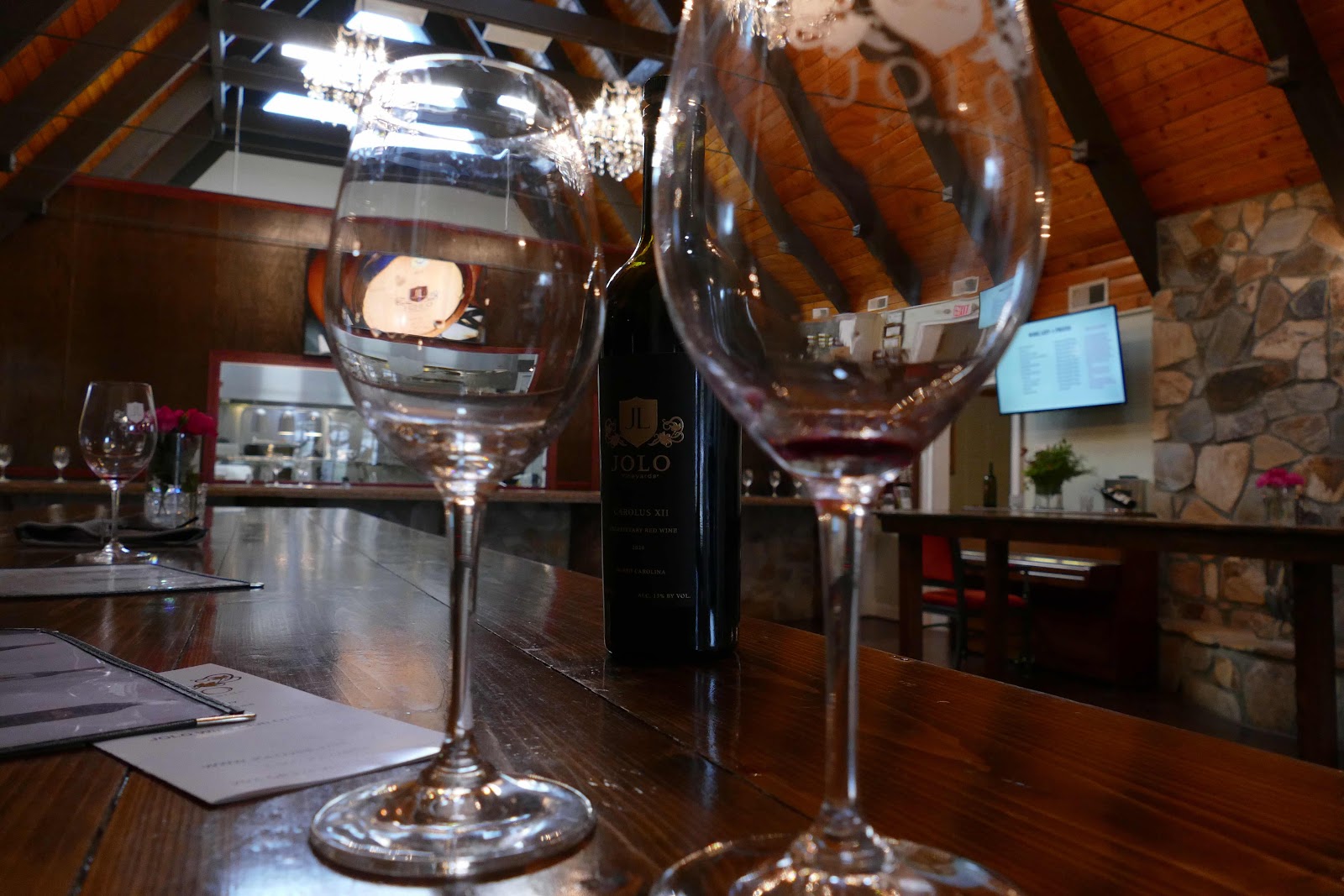 After all that talk about plonk much of which actually tasted really good, we moved on to the main event which was lunch at the winery's restaurant. Lucky I was not to be driving as we had a bottle of white to deal with alongside the rather delicious food. Crab dip: 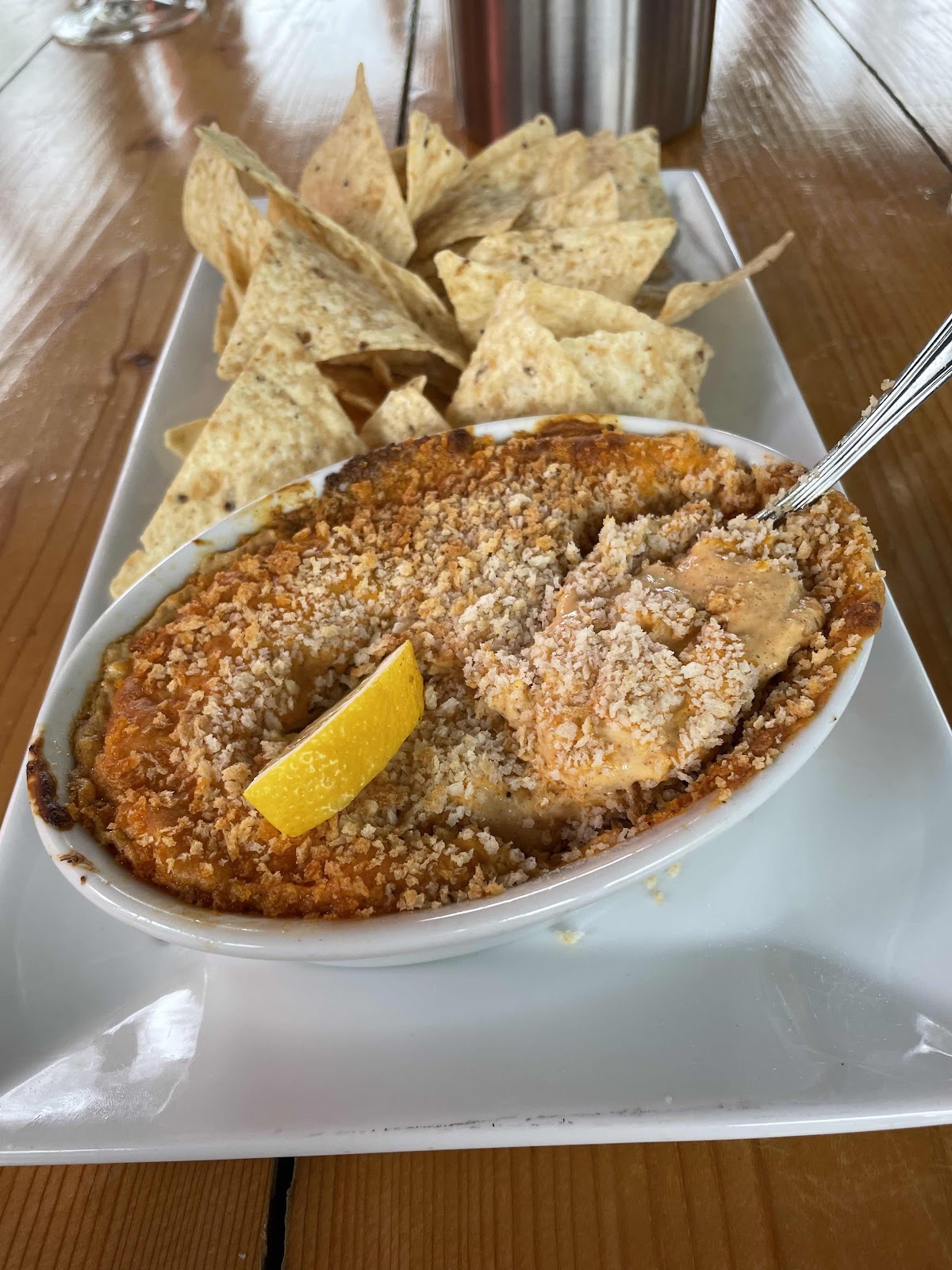 The fussier members of the team wondered why it was served with tortilla chips but I was too busy shoveling to worry about such niceties. It was excellent. My main course looked like this: 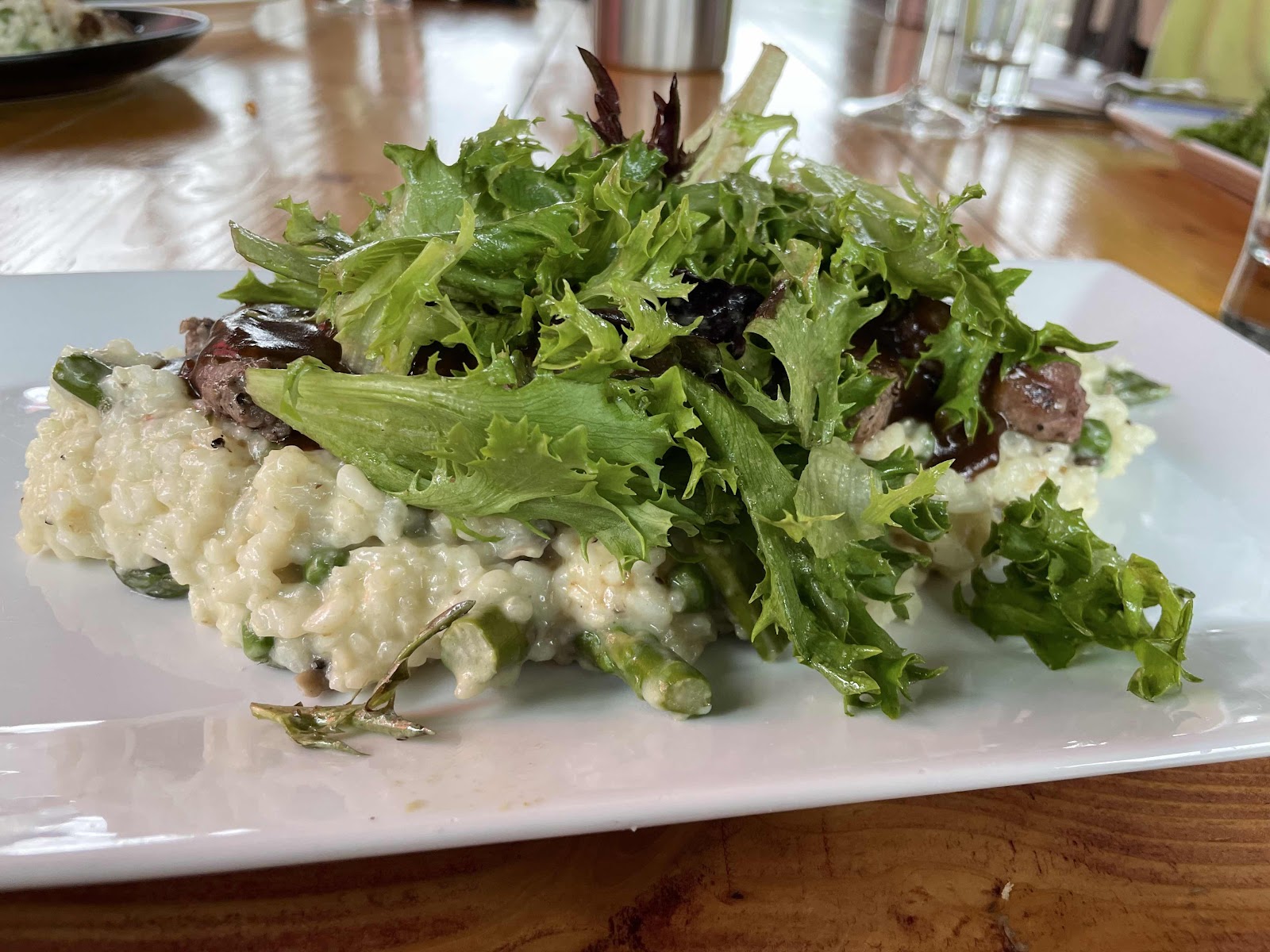 A delicious salad on top with a spicy oil and vinegar dressing and chunks of beef underneath with mushroom risotto at the bottom. It was   a really good lunch and I scraped the plate. Geeta and Bob belong to the denial brigade modestly averting their eyes from the dessert menu but Layne and I were made of sterner stuff and ordered four spoons with chocolate brownies and a lemon cake. Guess what? Even the deniers dug in. 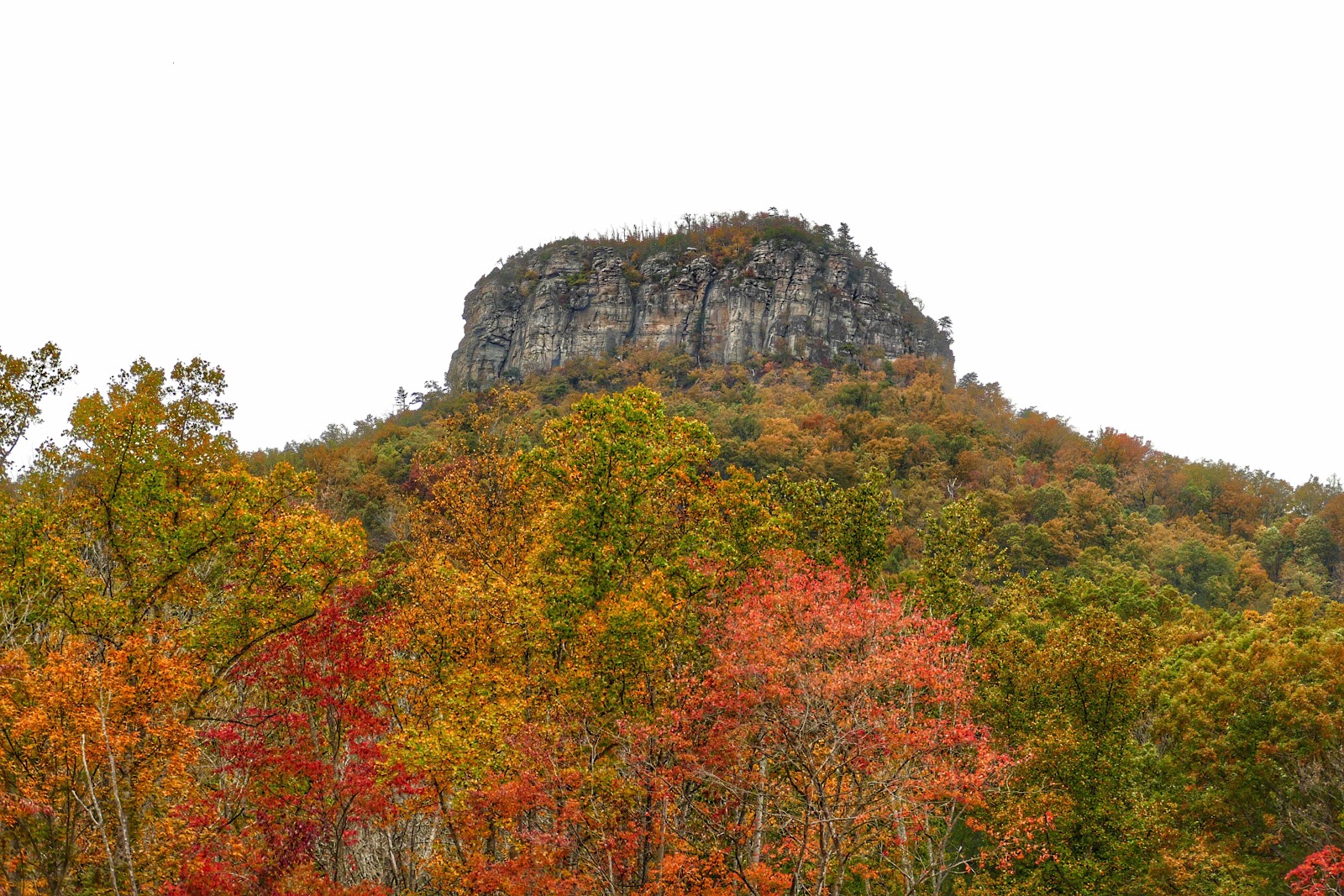 Then the serious business of going for a walk. Check out these woods which have delayed changing color this year expressly to celebrate our retirement. Ask me later if I miss work or wish I could answer just one more 911 call. 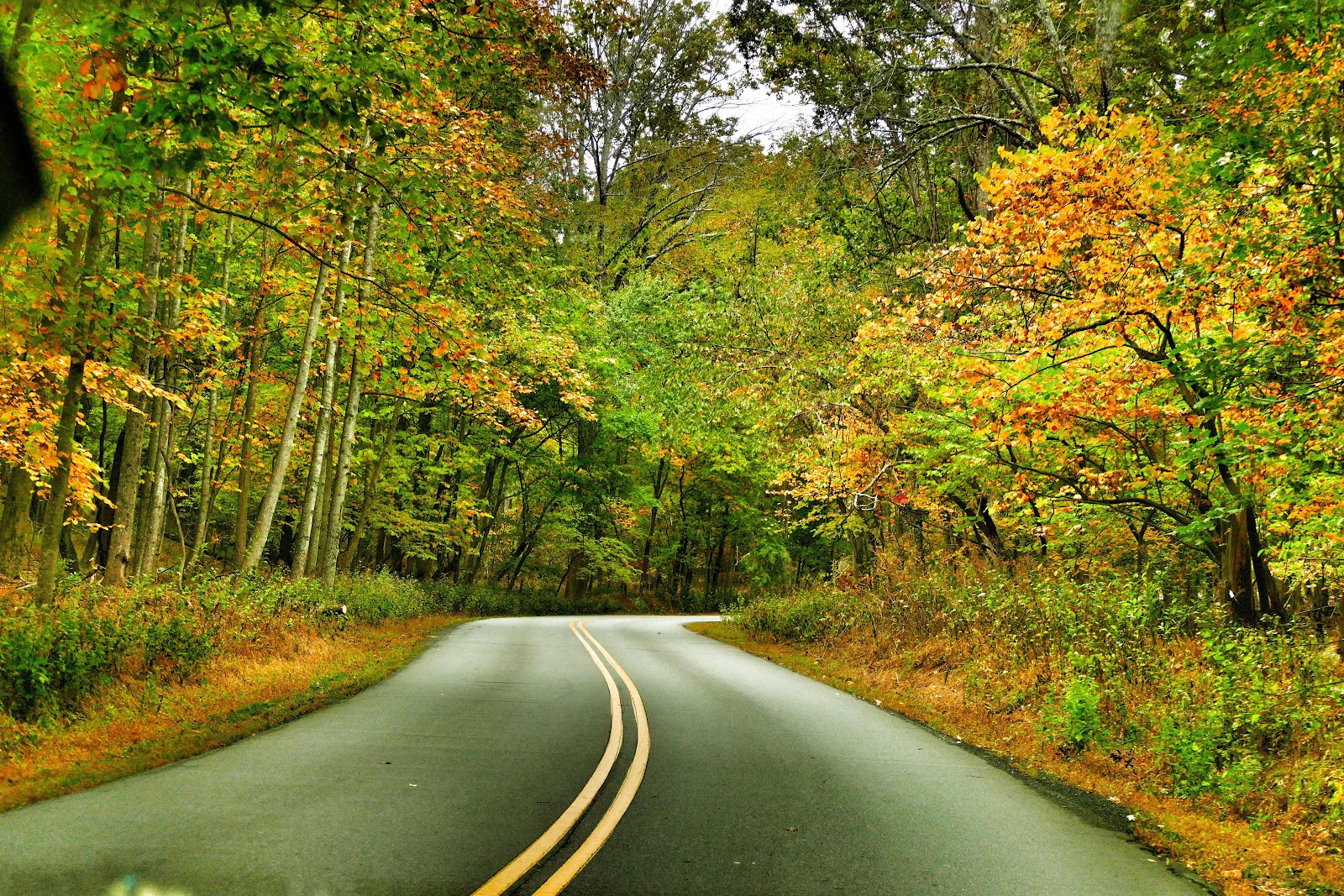 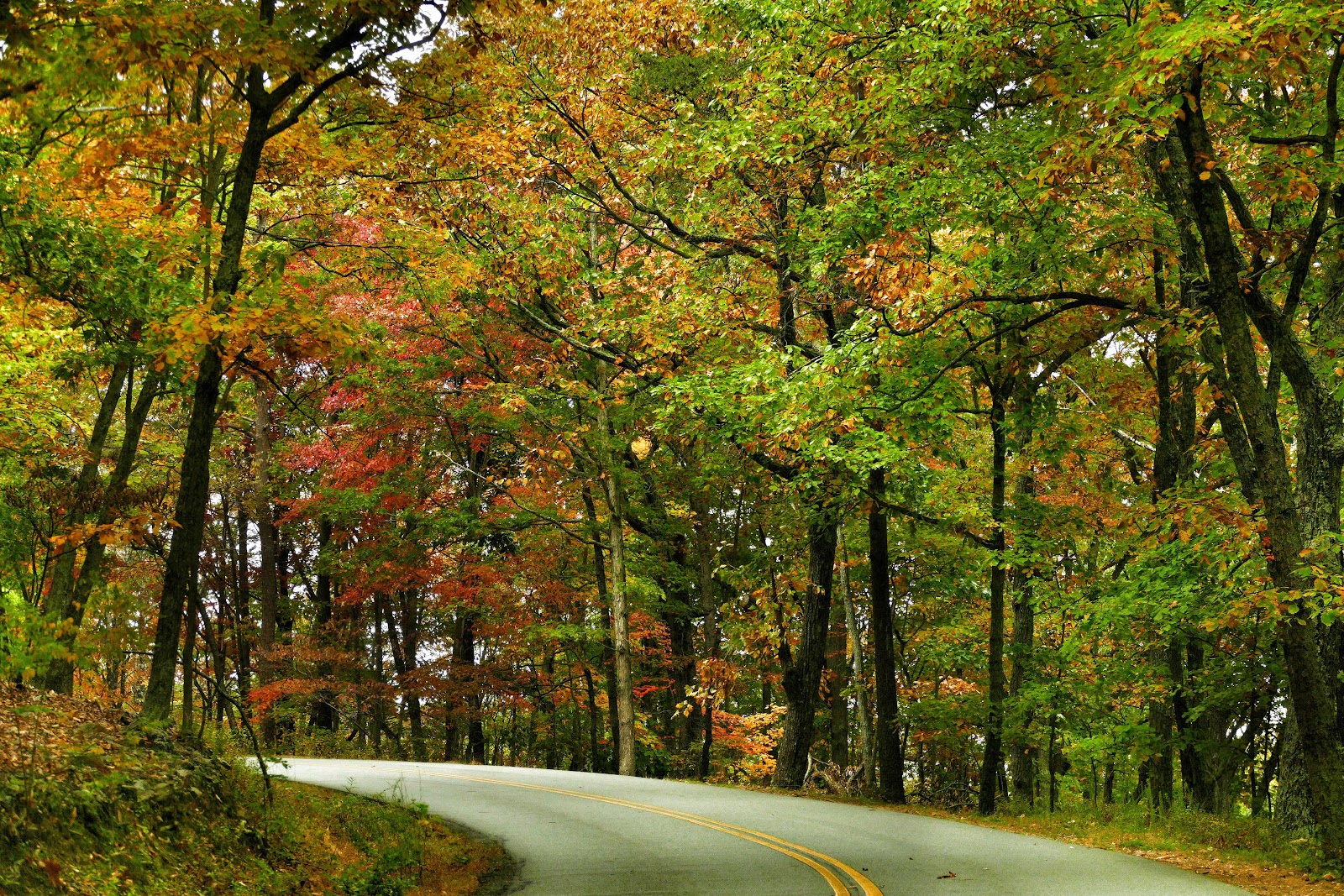 The parking lot at Pilot Mountain had the usual smart aleck remarks on signboards everywhere for the less bright among us. I told Rusty it was lucky they had put this sign here else he would have gone overboard but he ignored me and declined to give me the subservience to which I am not accustomed. 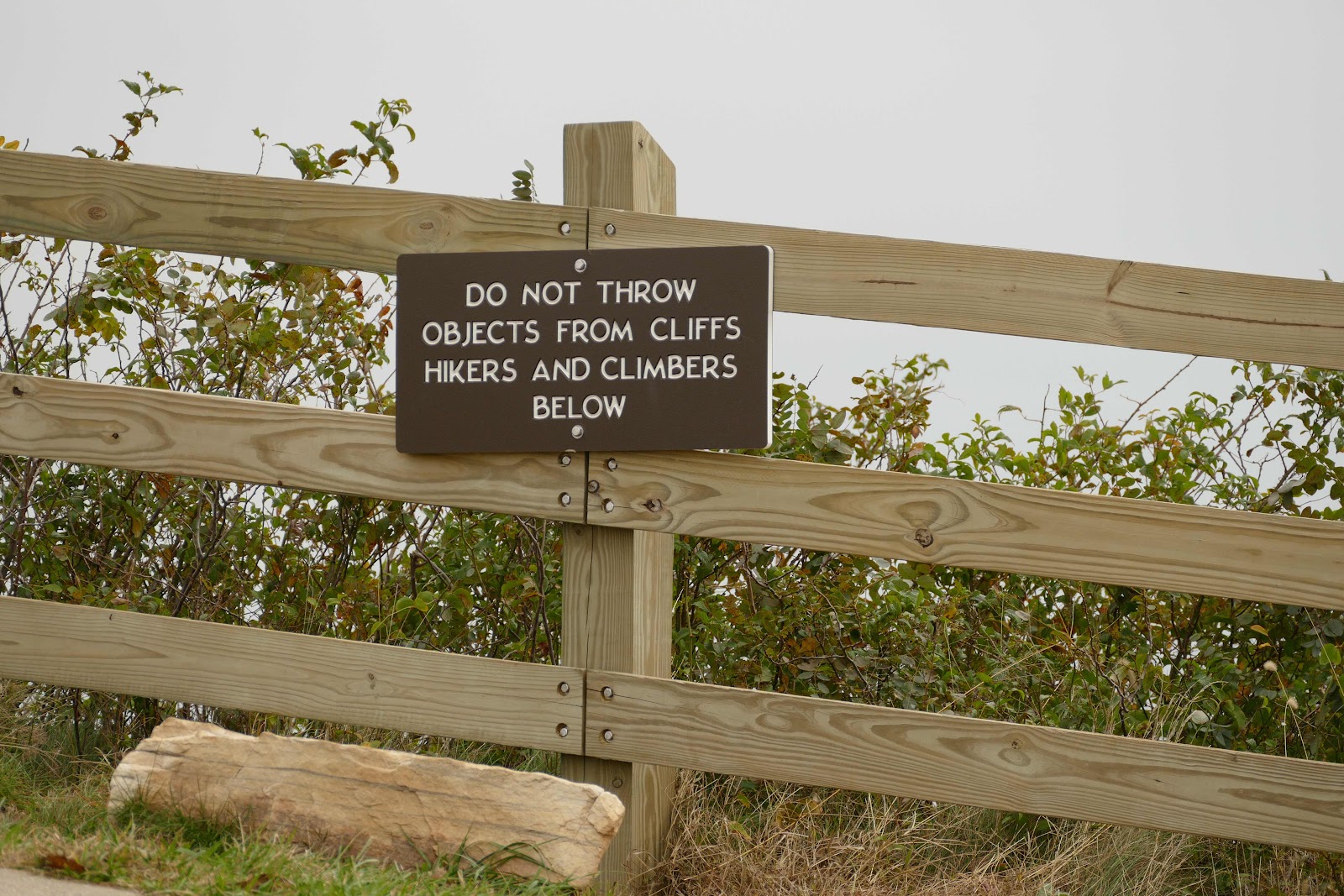 Bob, stuffed full of fried goat cheese salad and brownie looked over the side and remarked it didn't look the least bit like the Bordeaux wine growing region of France, his latest craze, which was such a non sequitur I asked if it vaguely resembled Mexico? As usual my joke missed the mark. Mexico is next on my list of places to visit, where incidentally they also grow wine. We shall taste it and pronounce on its oak in the nose and sugar content, or something. 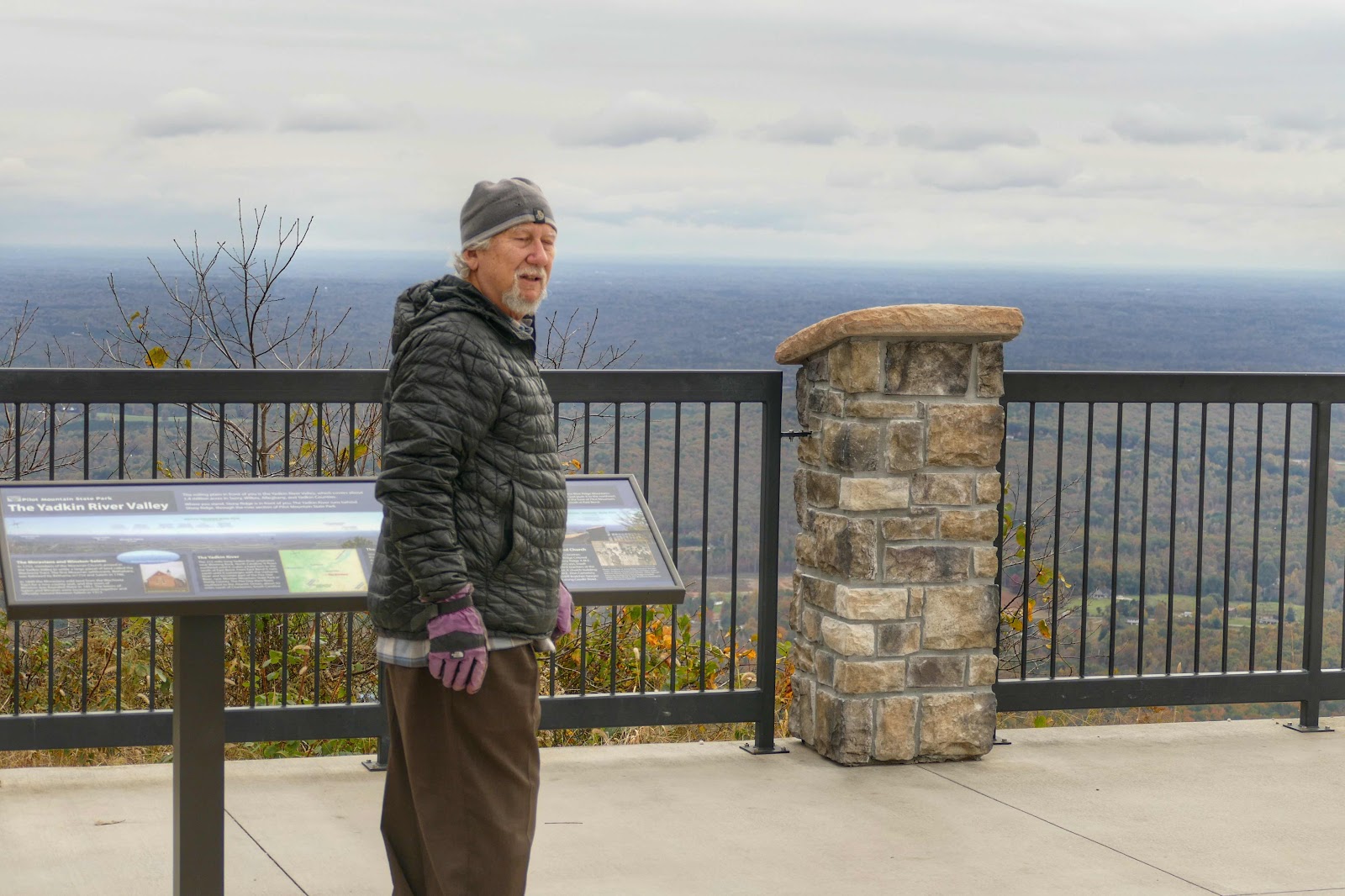 The mountain is 2400 feet tall and climbers like to haul themselves up the Knob, a rather rude nickname for the big pinnacle. Ordinary people  who fear falling off cliffs get to stumble unhandily up to the smaller pinnacle and admire the rugged emptiness of the big Knob covered with trees and apparently highly attractive to turkey vultures. 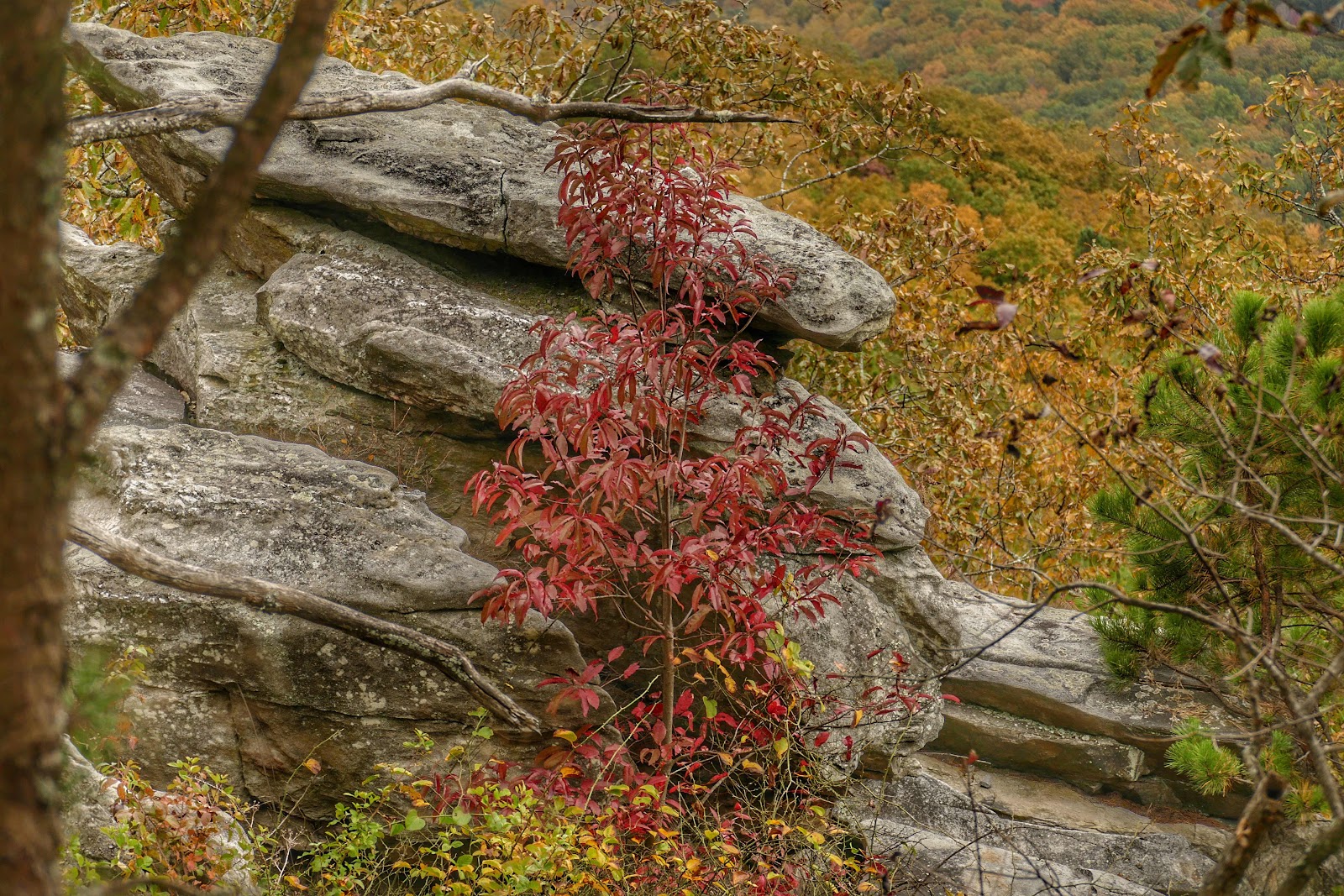 The colors are nice on the little pinnacle and the views splendid whatever they lack compared to Bordeaux. 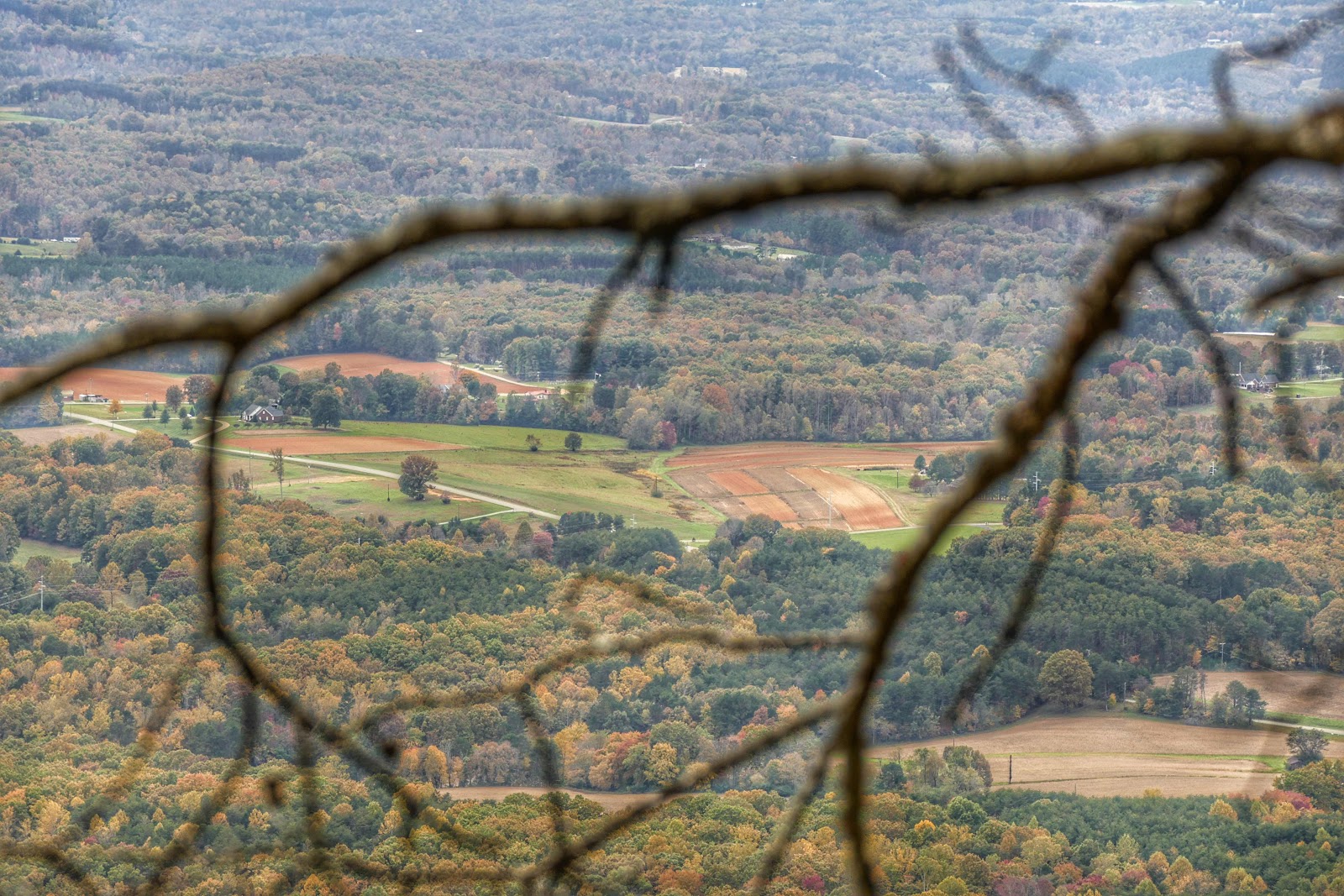 My wingspan is five foot six with arms splayed so not too well do I compare especially as I have to walk everywhere. 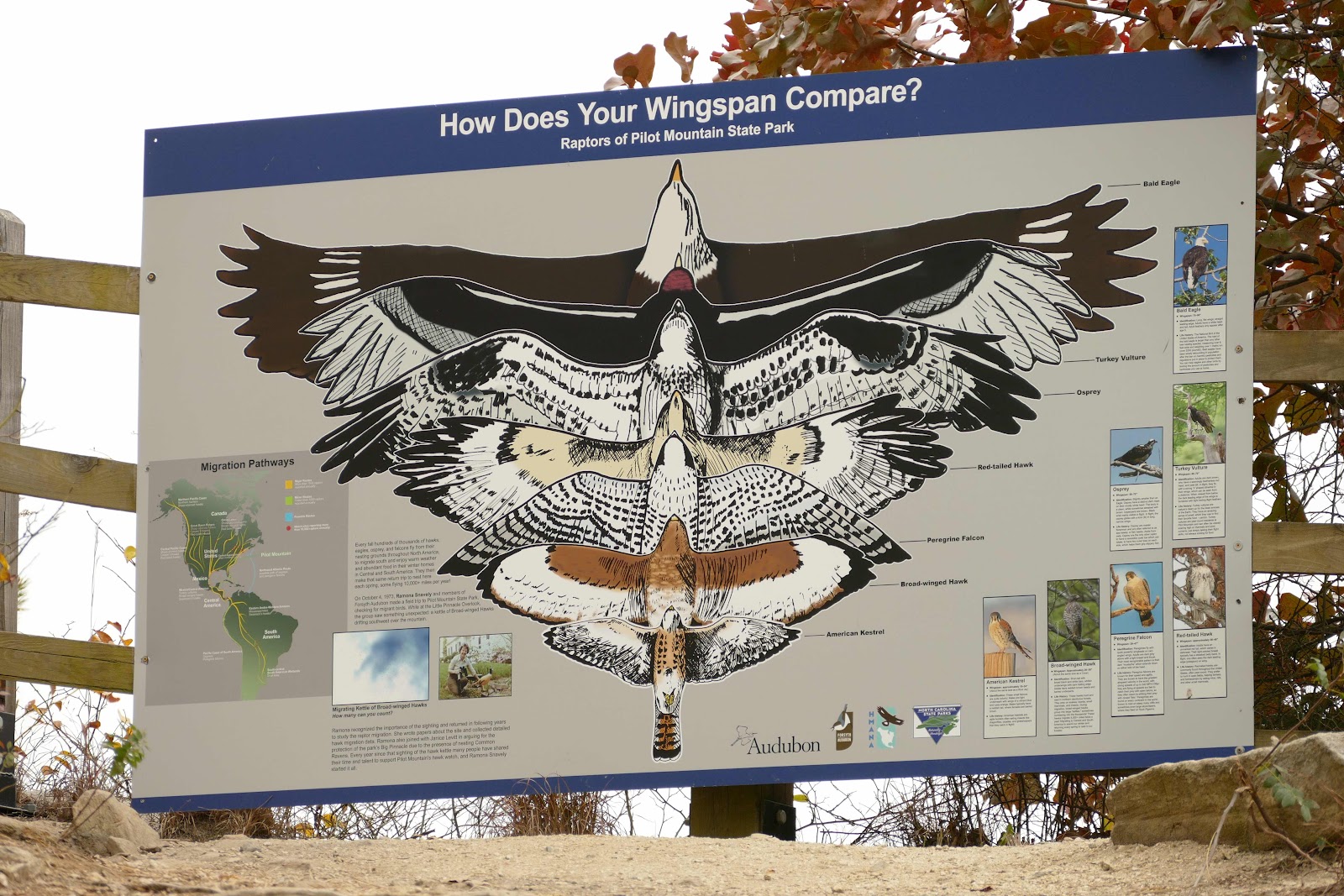 Walking around here is actually a tad bit tricky if you aren't Rusty who leaped like the proverbial mountain goat. The trail is a winding path through rock formations which create natural steps which unfortunately aren't accurately measured to take into account the average length of the human stride. 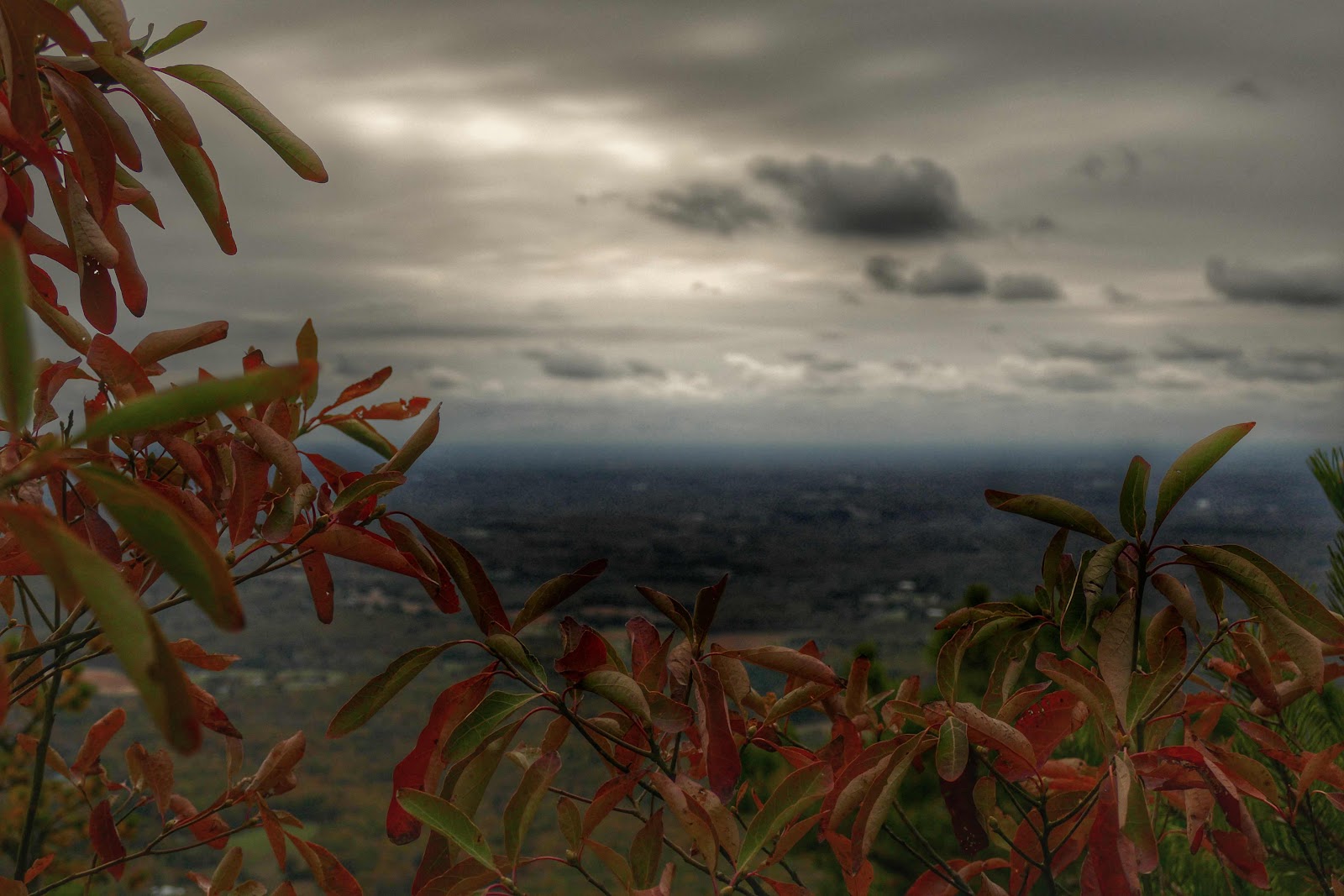 The result is a walk that is half scramble, half shuffle and always looking where you put your feet as the surface is never flat and smooth, at least it wasn't where I followed Rusty's leash. 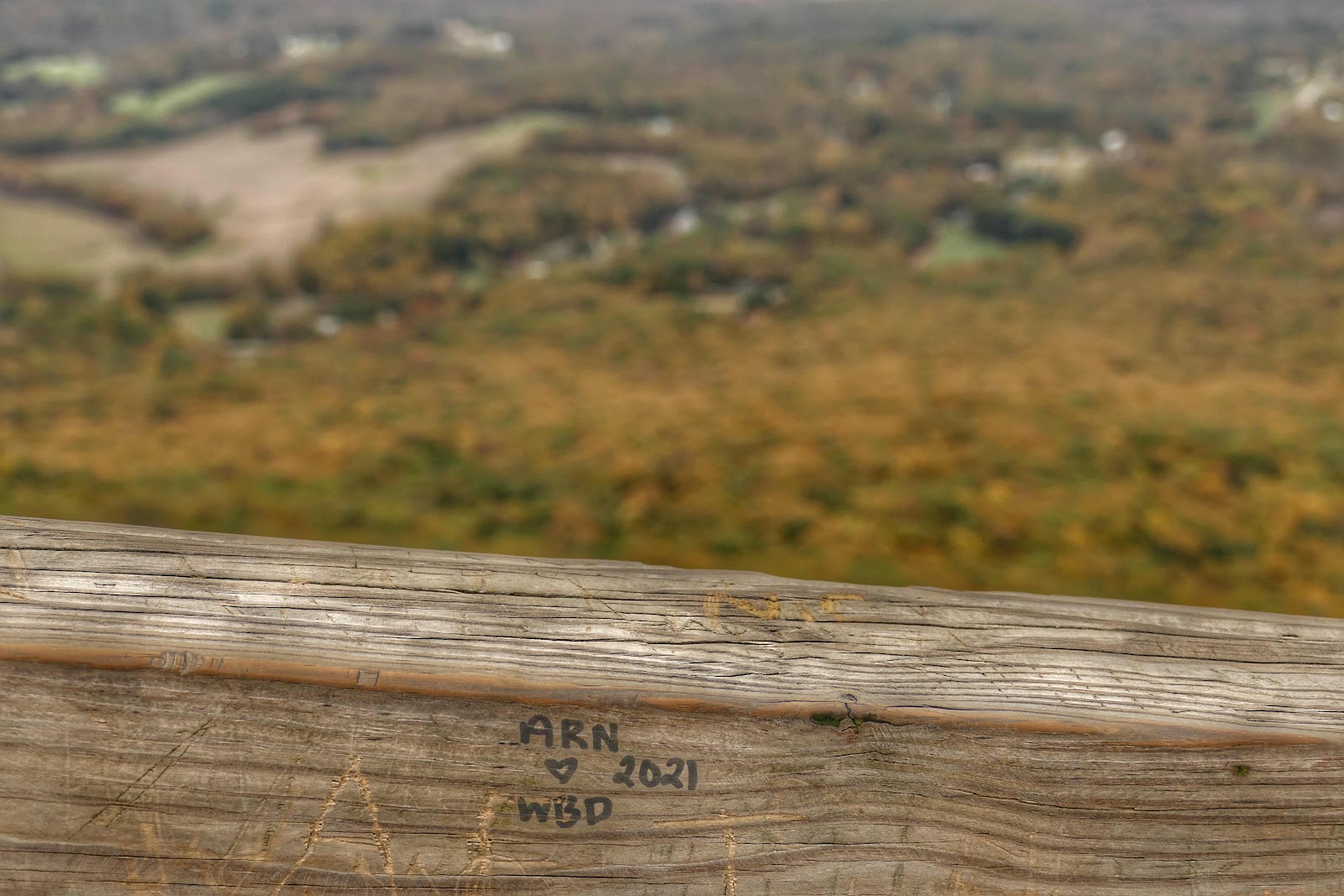 I was relieved to see some few people found love here. Apparently it was a place occupied by the unknown-to-me Saura Indian tribe before the rest of the world dropped in. They are a confusing bunch as they are most commonly known as Cheraw and they had their first contact with Hernando de Soto in 1540. He was the explorer who landed in Bradenton more or less, near Tampa and created his own brand of havoc thereafter. Wikipedia says the Saura/Cheraw have essentially been wiped out which may explain why I've never heard of them. They are now reduced to the status of "remnant people" which sounds desperately sad. 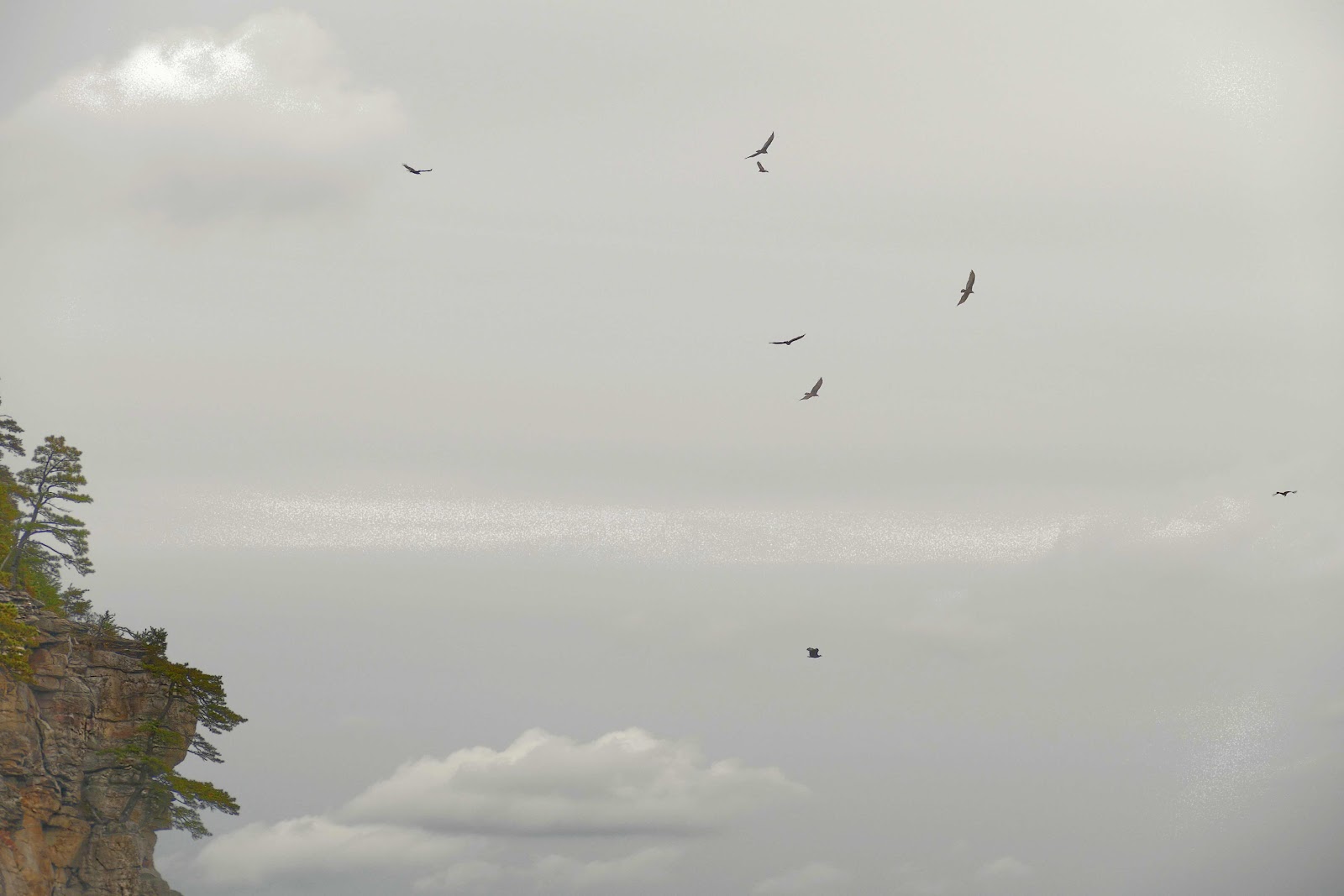 The little pinnacle was filled with people and I was reminded how when Americans look at a dog they wonder about the breed for reasons not known to me. Even more mysterious are Mexicans who want to know the gender. Apparently dog penises are invisible to them. Anyway the answer is "Macho" for male (and you thought it meant something else), and "Embra" for female (which you also thought in English meant something else). If they are going to get personal with Rusty I add they he lacks balls (falta las pelotas) so they know the full story. Rusty doesn't seem to mind. He'd better get used to it where we're going. The other question they ask is if he's "bravo" which in Italian means good. In Spanish it means fierce which has led to some amusing (to me) misunderstandings as Mexicans leapt for the lamp posts when I smiled and said yes, he is fierce. Oops. 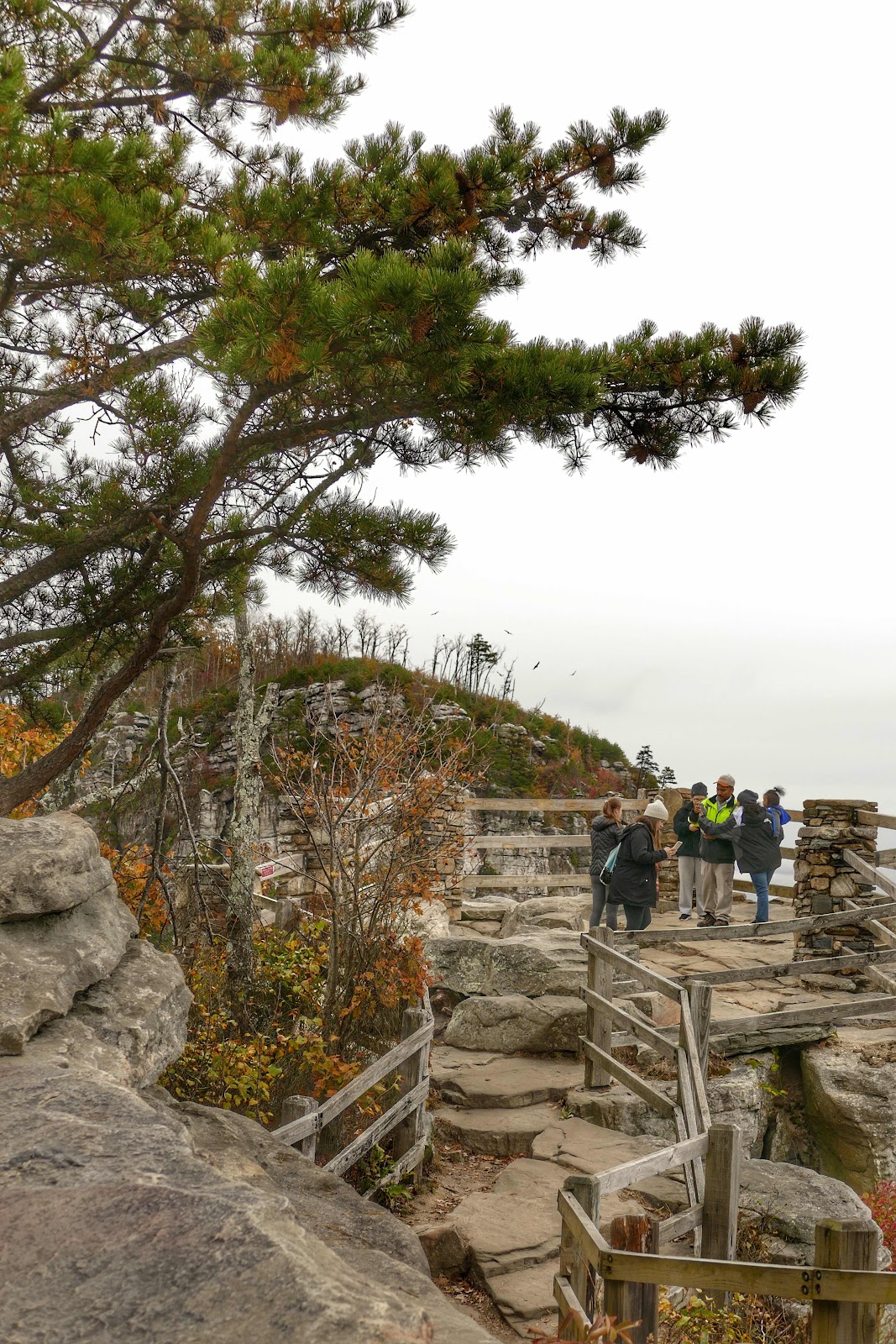 The scraggly trees in the distance marked the Knob (not Rusty's). It looked a rather arid destination to climb  but climbers are weird. 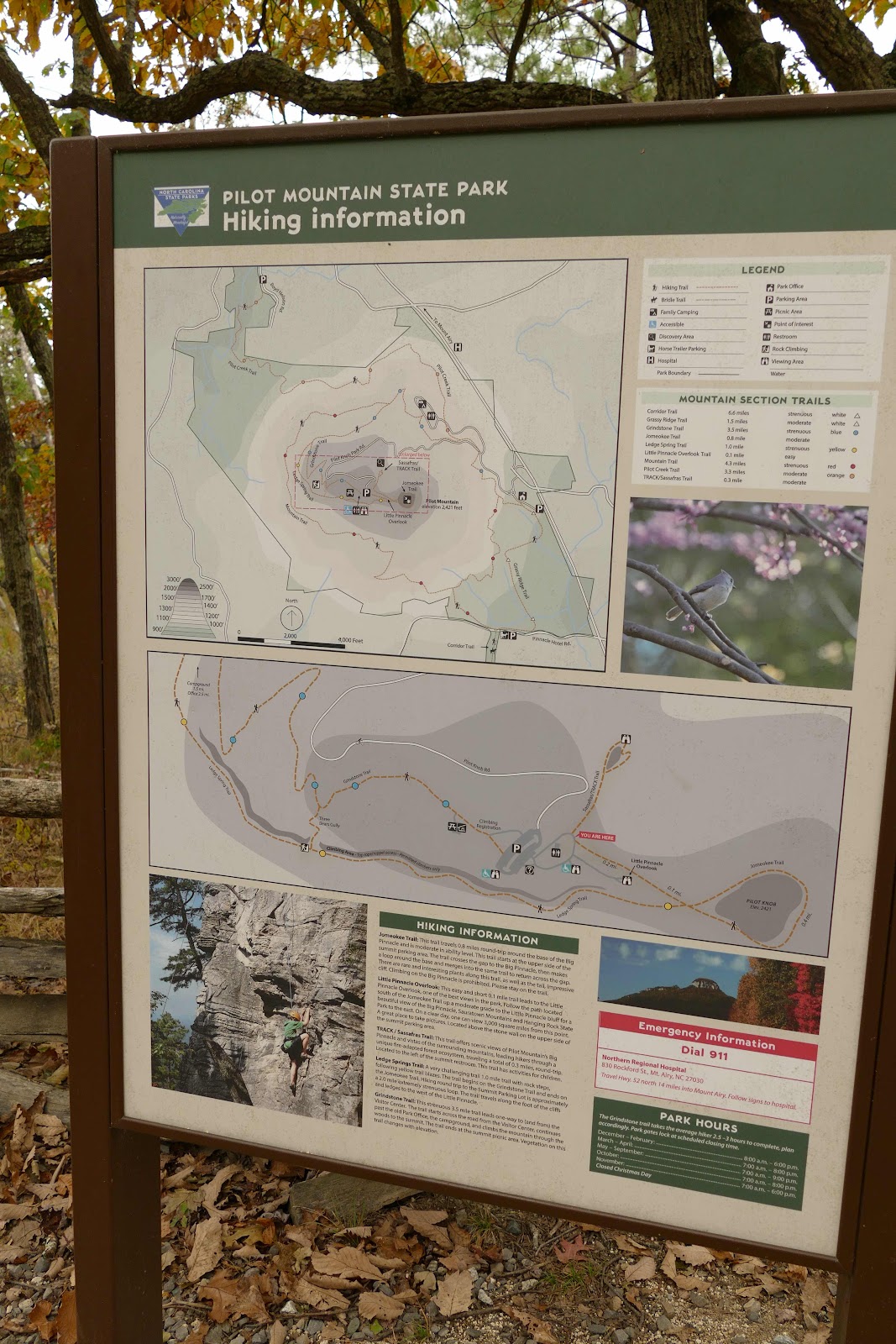 In places not known to him Rusty is not of the explorer caliber of Hernan de Soto and prefers to stick close to the known and familiar. Me? I'm ready to wander off down any old trail but he prefers parking lots, outhouses and dumpsters. Lucky me. 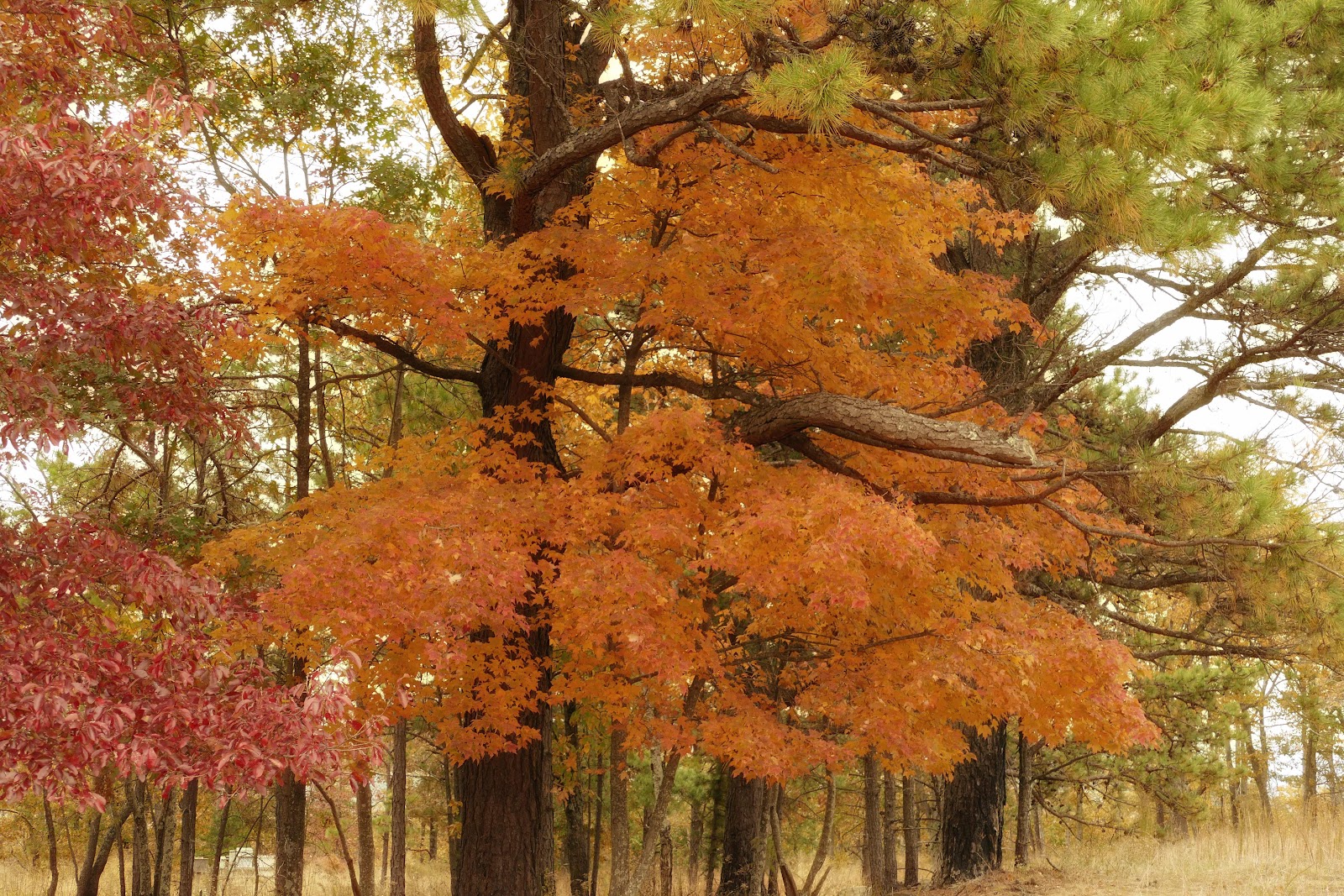 They even have a kids program along one trail which I figured couldn't be too arduous for my outdoor dog but he declined and sat on the spot just like Track, until I gave up. 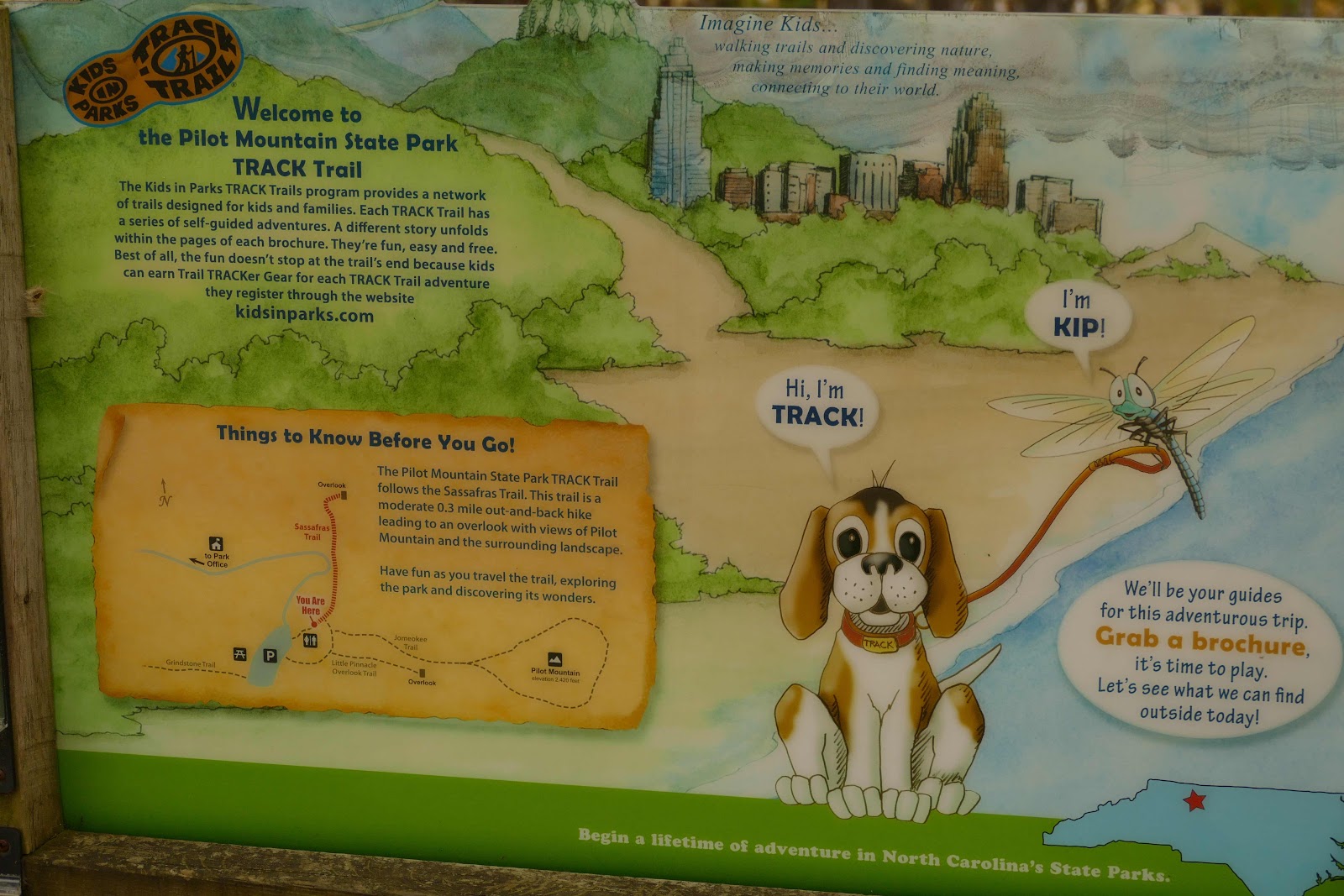 Then we did some people watching. Very companionable. A pretty good day and we had frost to investigate for the first time the next morning. Oh and I dropped my driver's license in Elkin. The day was not over... 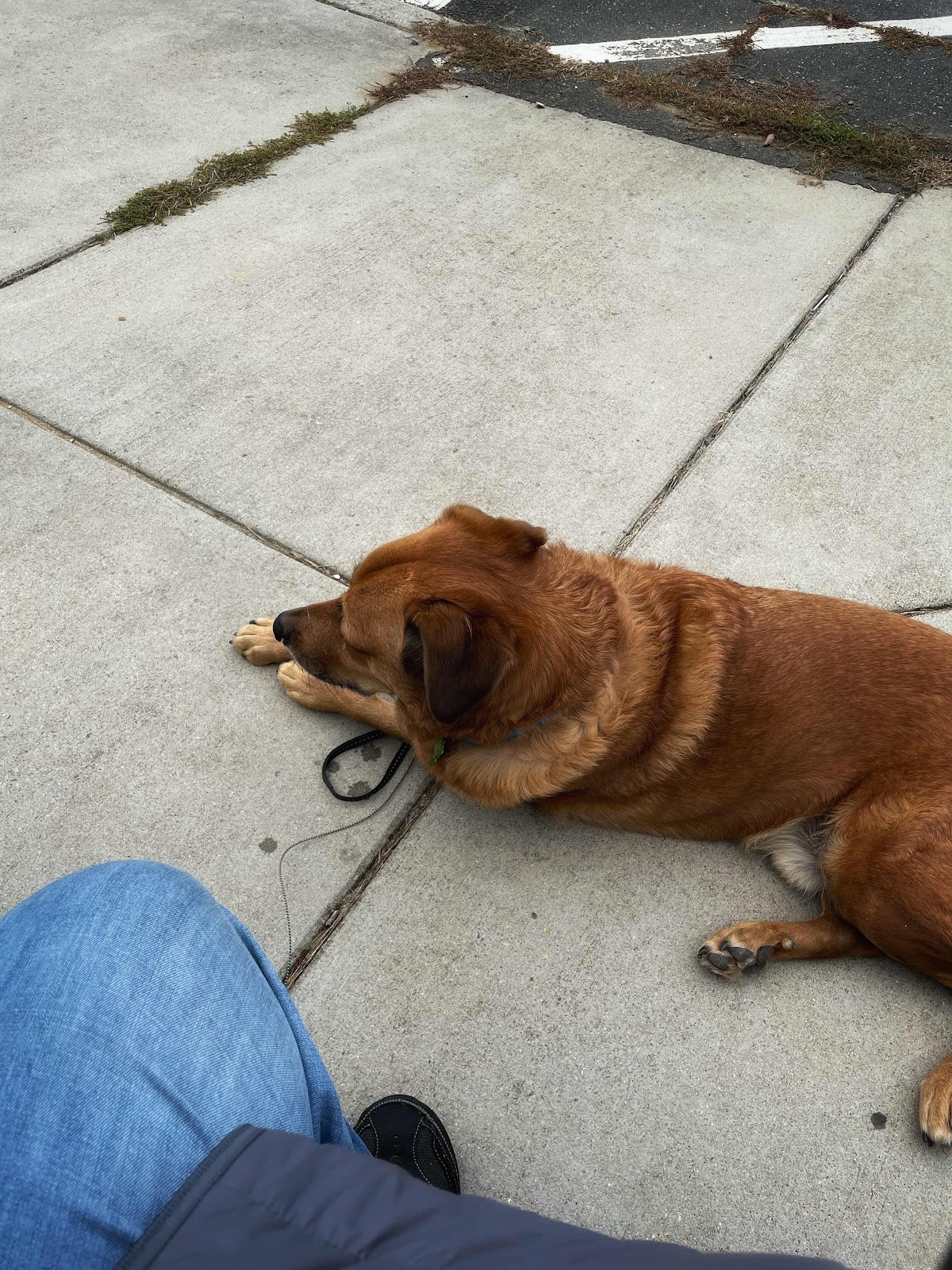