You don't have to go far in Key West to find dramatic seascapes. This one I took facing west from Truman Waterfront, looking across the Navy Basin towards the harbor. 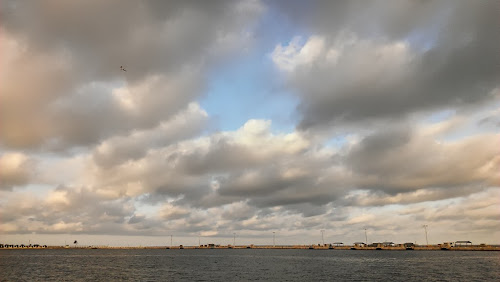 The skies are usually blue around here, unless it is threatening sturm und drang thunder lightning and rain. 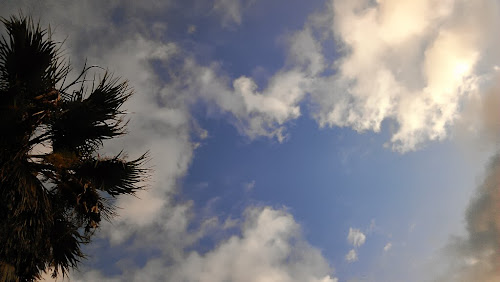 I enjoy the play of sunlight through the wispy cotton wool overhead and I spend too much time peering overhead as I go about my business down here. 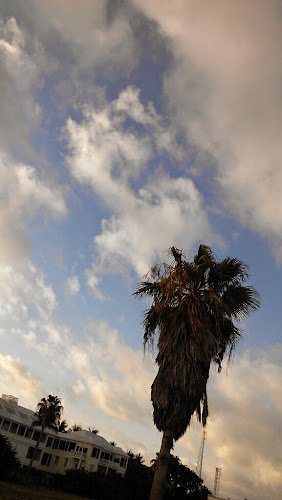 The old coast guard cutter Mohawk has long since departed the seawall, dragged to Sanibel Island to be sunk unceremoniously to attract divers to the Lee County coast. It was got rid of to make way for a marina planned for the area now stymied by a firm no thanks by the US Navy which controls access to the waters of the Navy Basin. All that's left are these deck guns painted the same shade of gray, incongruously decorated with a bottle of fabric...softener? Most unwarlike. 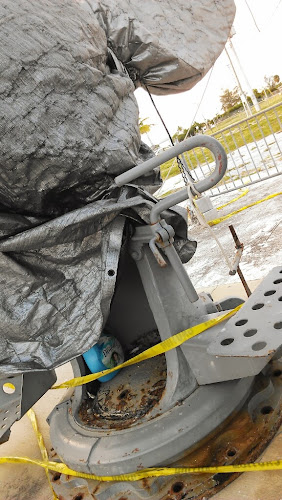 One day not too long in the future the city wants to have a pedestrian boardwalk running the length of the waterfront, from Fort Zachary Taylor to the south, to Trumbo Road to the north. I look forward to it. At the moment the waterfront is a bit chopped up, with large hotels like Ocean Key dominating the waterfront skyline. 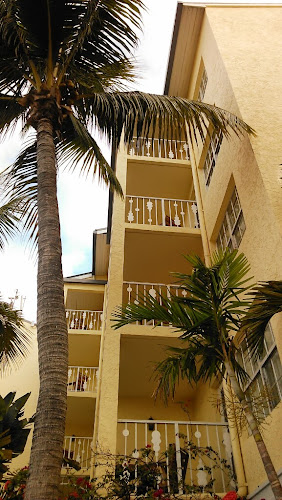 Mallory Square's bricks retain some of the old ambiance of a working waterfront, marred by high visibility clothing and the ubiquitous rehydration device, bottled tap water. High Viz is highly fashionable but curmudgeons like me wonder why anyone expects others should see them when thy are out enjoying themselves. High Viz is a cult requirement among novice motorcyclists . I figure it's up to me to pay attention, not to expect bored drones in cages to notice me. Try telling that to a devotee of fluorescent yellow. 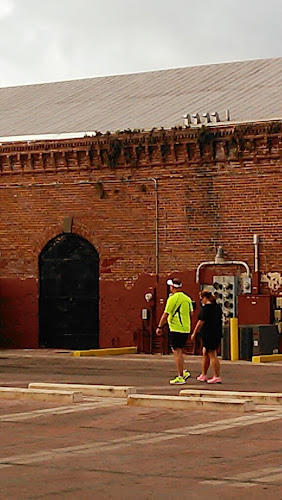 Old Key West is always celebrated, but always as a way to pander for dollars. I like history because the past is a guide to the present. It makes sense of life the way religion works for believers. 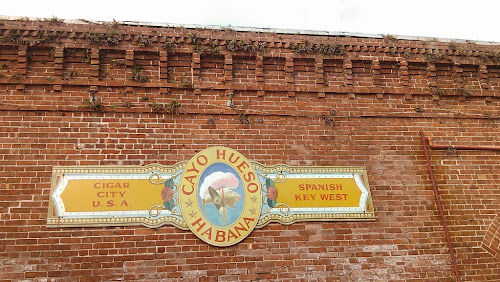 On the subject of history Key West has its own Wall Street: 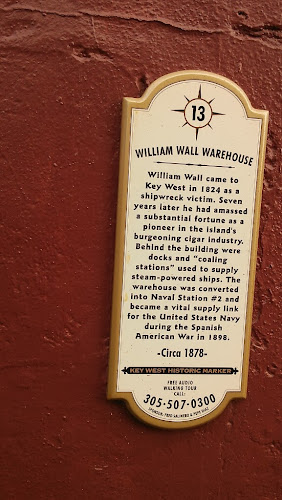 When I'm answering 911 calls I wish each building in Key West had a sign like this. The a swer to my inevitable question: Where are you? would come easily... 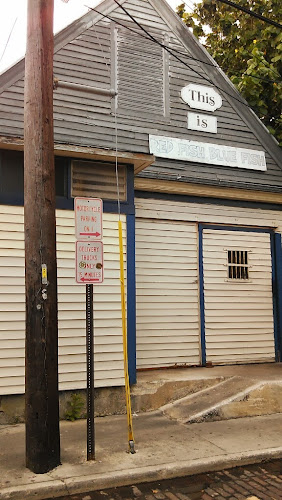 The answer to the question of where Cheyenne is at any time is: usually rooting around in the bushes. 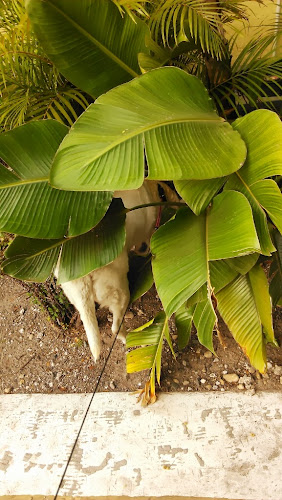 I am always surprised by how much clutter occupies the lives of the residentially challenged, overflowing bicycles and shopping carts abound in Key West. 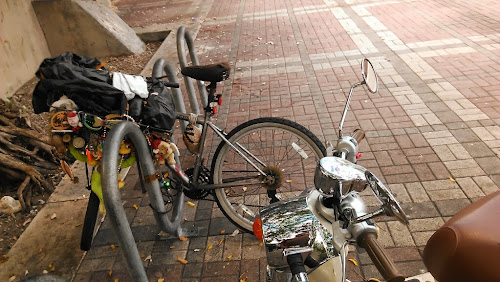 Some kind soul donated a snack to my dog. And not even hidden in the bushes. 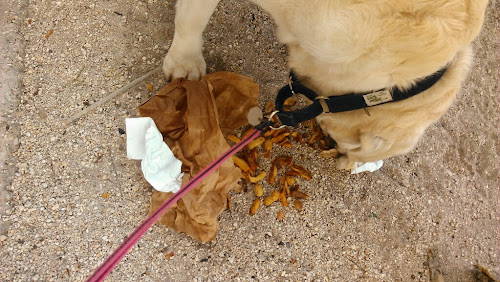 The pause gave me a few minutes to compose some pictures through the Mallory Square railings. 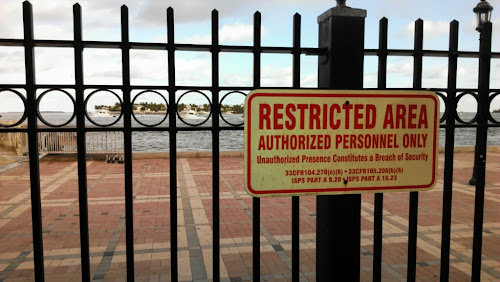 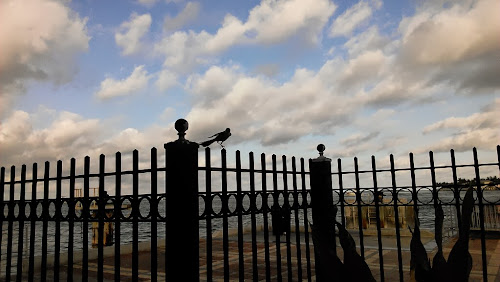 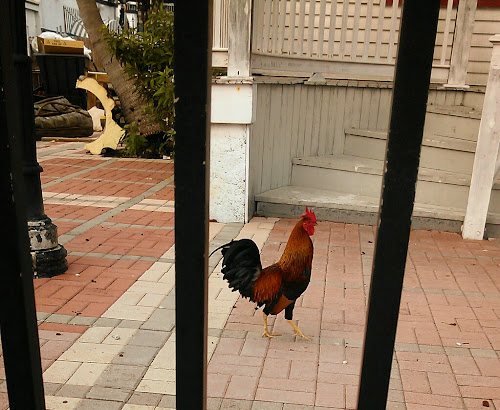 This guy on the walkway was enjoying a morning in Key West a d we came abreast of him I gave him a cheery good morning. He looked startled. I guess men in pink Crocs are looking for sex wherever he comes from. Glad I don't live there or my life would be extra complicated. 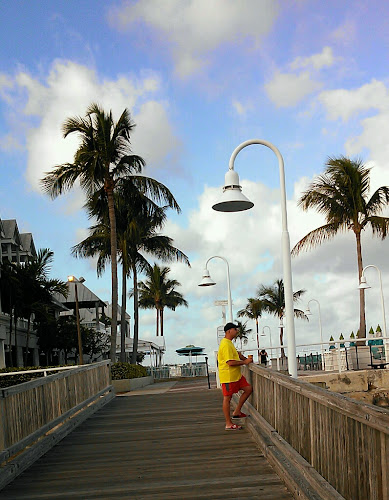 Every morning Key West is ready for the tourist influx. 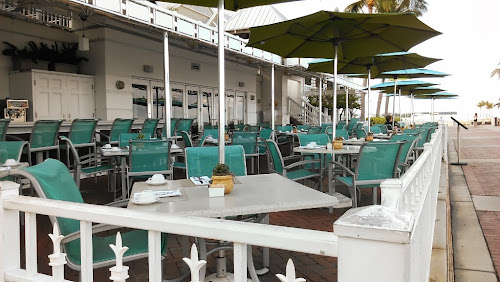 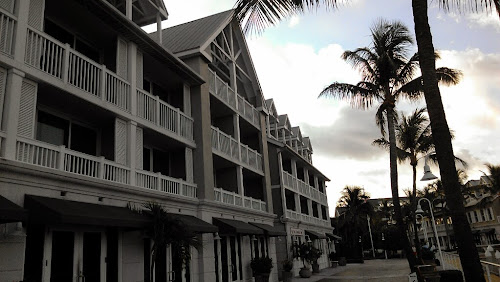 Once the boardwalk is complete there will be lots of places to amble and stop and look and think. 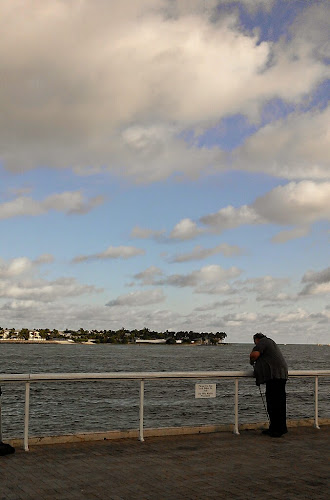 Not that you can't do that right now. 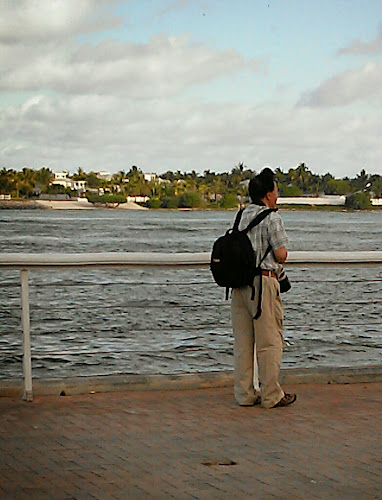 I was looking idly at the Cusotms House Museum windows, enjoying their beauty when I oticed the photo. Hmm, homo-erotic art? Really? Ah, Key West has an image to keep up. 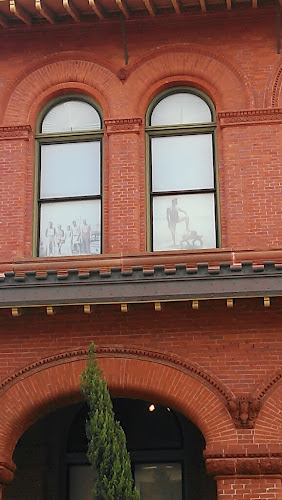 Key West and its feral cats. They are smarter than a lot of people because they aren't scared of Cheyenne. 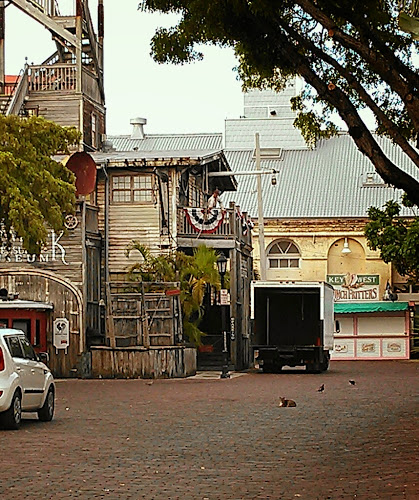 And then we come back, by way of Truman Annex to the Navy Basin and the seawall that separates it from the Westin Marina. 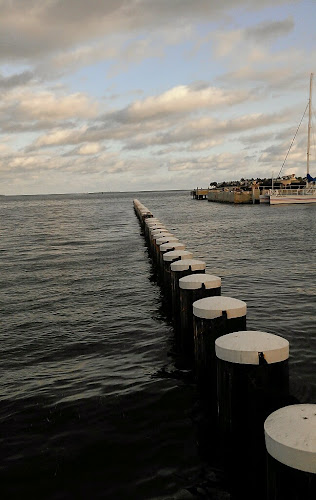 My Key West; everyone's Key West, there for the viewing.