I may have reported this since the original posting in 2007. But it remains a happy memory of a journey all too long ago. N o reason not to repost I dare say so here it is.

We transited the Panama Canal on our sailboat Miki G in the Fall of the year the US finally pulled out of that operation. 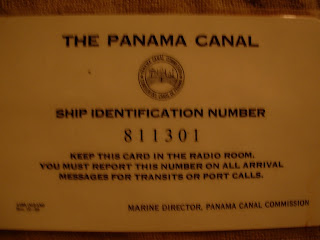 I doubt the Autoridad in charge these days would be too impressed were we to return and expect a transit for our 34-foot catamaran through the canal. These days its a self funding operation and every transit has to pay for itself and sailboats are very low on the totem pole. Our buddy Anna rode through with us to check out how she and her husband Ian were going to cope with their boat Joss. We had a minor crash later when the tug we tied up to left us in the lurch and we were slightly beaten up as we were dragged through the lock sideways by the currents. Damage was minor but we stared death in the face for a few awful minutes. 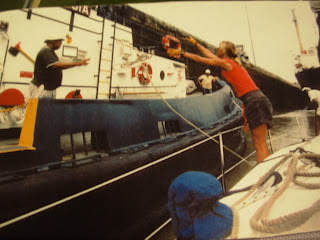 Days later Joss made it through fine, though I was always worrying about what had happened to us as we locked through on their trip. Ian confided in me later that he couldn't get the image out of his mind of Miki G swirling helplessly through the lock like a leaf down a drain.

We were weeks ahead of the hand-over to full Panamanian control of the Canal, but years later I did meet the skipper of the last boat to be issued a US transit permit as the seconds ticked up to the noon hour December 30th 1999. Ghost, a suitably elderly wooden sailboat that I believe was shipped back from Marathon here in the Keys, to the owner's home in Marin County California.
When people find out we sailed our Gemini catamaran from California to Florida they are always fascinated by our transit ($500, two days, and the dogs behaved impeccably!), but we remain fascinated by the country of Panama at large. 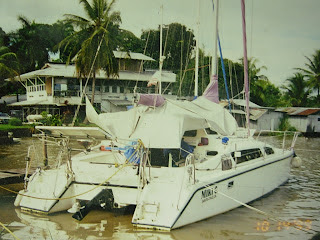 Miki G moored for several weeks at the now defunct Pedro Miguel Boat Club, next to the Pedro Miguel locks on Lake Miraflores. The marina used to be a Canal Zone perk, but during the US Administration it was also an excellent place to tie upto make repairs and rest from the culturally arduous business of cruising Latin America. Pedro Miguel was an English speaking, boater friendly, oasis even in the years after the Zone was ended and Americans only stayed on to help transition to Panamanian Administration. However the Autoridad del Canal de Panama has shut the place down after a long legal battle and pictures such as this can no longer be taken because the club is gone (plus we sold the boat to a friend in Key West who isn't interested in cruising right now!). One of these days I'm going to write an entry about all the place I've been that no longer exist. A depressingly long list, indicating an excessively long and well traveled life I think, even though the places themselves weren't that great; the USSR and East Germany high on the lackluster destinations I Have Known.

Panama started for us when we rounded the cape separating Costa Rica from Panama one dark and windy night. We blew into Panama full tilt and never got over how much we wanted to be there. The river trip to the second largest city in the country David ("Dah" with the emphasis on the "i" ) was an amazing maze to navigate. Non sailors often think rivers are refuges but we found that jungle river to be a pain in the ass with massive tides, floating debris and low overhanging branches, not to mention sandbars and few places to  drop the  anchor. 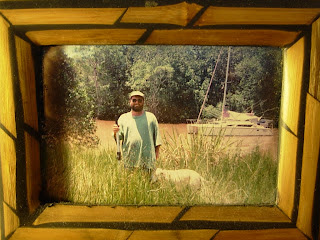 I keep this picture framed in my office to remind me of our mad cap adventures trying to find places to walk the dogs away from the prying eyes of the officious Customs agent who was determined to enforce Panama's 'no pets ashore' rule. Emma, our Labrador stuck close to me while Debs, our Husky dived into the bushes like the little explorer he always was. Everyone in the rest of the country ignored the quarantine rule and we took the dogs everywhere with us, into Panama City, into Darien by rental car, and up into the mountains in the middle of the country.

We really got to enjoy Panama among the Pacific Islands that dot the uninhabited coast. There are beaches, palm trees and crystal clear waters in an immense 300 mile playground where sailors can play Adam and Eve for months and not see the same place twice. We washed up on Isla Contadora in the Perlas Islands, which has an airstrip, hotels, some stores and fuel supplies. A walk was de rigeur through the ritzy neighborhoods where rich Panamanians keep weekend homes. I like this picture, it inverts the usual stereotype of Latin Americans being the gardeners for wealthy white Americans. "Mow yer lawn, guv?" 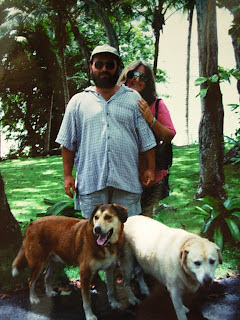 After we got through the Canal we spent several more idylic weeks in the more famous San Blas islands on the Caribbean side of Panama. These Kuna indian islanders practice a low tech medieval lifestyle in their own autonomous province known to them as their Kuna Yala, with their own system of justice and social pecking order, similar to, but more idylic than, a US Indian Reservation. These islands resembled the Keys somewhat, in as much as they had coconuts, narrow sandy beaches and lots of scrub vegetation. We sailors gathered in calm anchorages and hung out barbequing under the stars, telling stories, swimming and playing cards until our supplies ran out and we had a private plane fly us out the fixings for a massive Thanksgiving dinner in November 1999. Believe me, we were absolutely bulging with thanks that memorable desert island holiday. 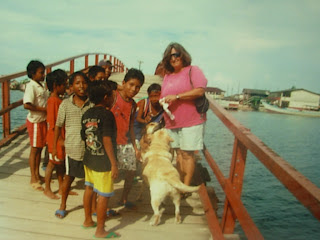 Teaching kids to pet the dogs (with treats of course!) on the Rio Diablo/Corazon de Jesus footbridge in the Kuna Yala. Kids are kids in the most remote places and Labradors do like their treats.

Panama was a hell of a place, far more varied and interesting than Costa Rica with a greater percentage of land given over to parks and all the benefits iof a money laundering economy with excellent banking (they use the US dollar for their currency) and superb medical facilities. Retirement? Who knows!