I could not help but compare North Carolina Highway 12 through the Outer Banks to US Highway One through the Florida Keys. Which is silly as they are not at all alike. 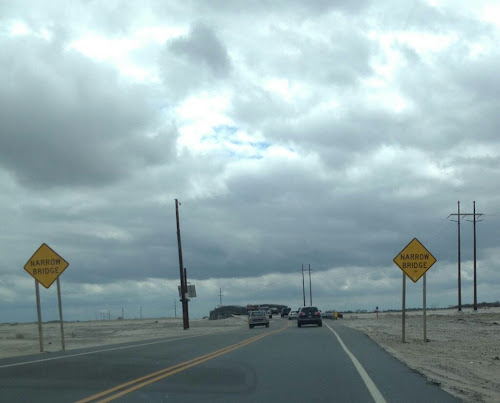 Highway 12 is made on sand, runs almost dead straight for most of its seventy miles and except for a handful of small towns is a National Seashore that goes by the familiar name of Hatteras. Hurricane Sandy last October 29th left a mark that is still felt. Twice we were held up by one lane traffic as earthmovers cleared left over sand still blocking and threatening parts of the two lane road. 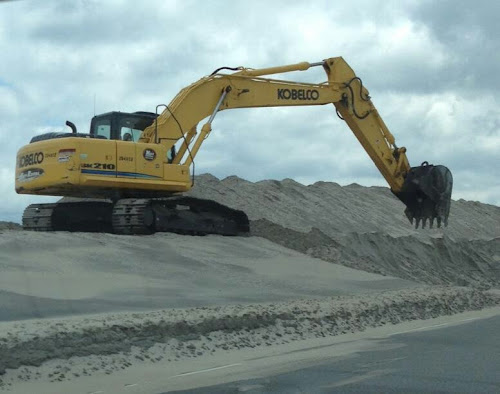 Oregon Inlet is a landmark not far south of Nags Head, a tall curving bridge tar forms an essential connection across the wide sandy inlet. The bridge needs repairs too but traffic was not closed by the work.

The small villages long the way that go by slightly odd names like Salvo and Avon and Buxton and Rodanthe sound more olde englishe and perhaps exotic than the reality. They are useful, selling gas and unimaginative food while offering commercial fishermen a base and renters a place to call home for a week in summer. Like the Upper Keys which are lush and packed with businesses by comparison- urban planning, zoning and beautification have no place here. 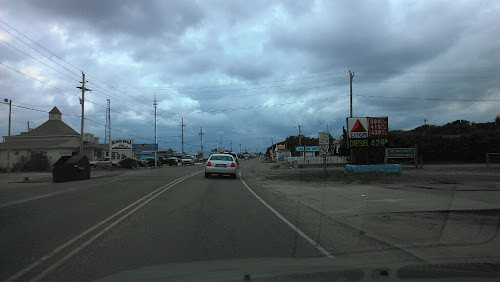 We left Manteo (pro: man-ee-oh) late morning and planned our lunch further south avoiding the few burger and pizza and fried fish joints further up the island chain. Venturing to the lower Outer Banks puts you out of reach of chain stores commonly seen in the strip malls of Nags Head, but in March not much is open and what is, may not be imaginative at all. We expected this yet traveled in hope. 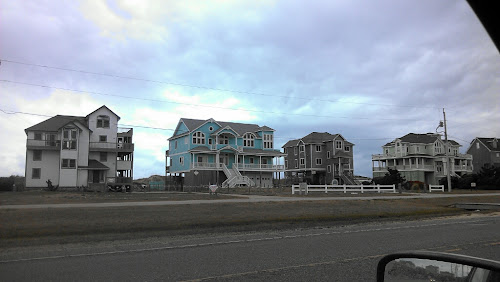 The other feature of note along NC 12 are these bizarre vacation homes that rise up out of the sand like sentinels of some lost civilization. An Ocracoke local said they are known derisively as "rent machines" and the few that exist on isolated Ocracoke are much scorned. 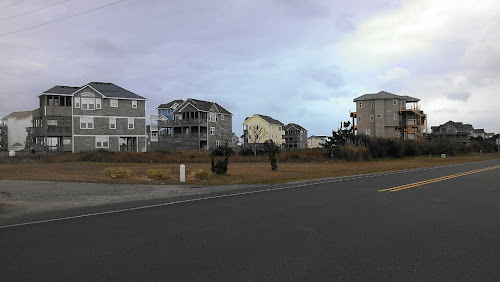 The homes are vast three storey structures that offer a place to stay for the vacationing staple of summer in these islands: The Family. 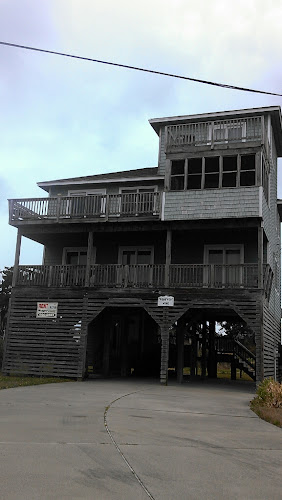 We got off the highway in Hatteras looking for a mythical restaurant and got ourselves trapped in a subdivision of these machines. They are managed by Midgett Rentals, all of them, which is a name with a long and illustrious history in Hatteras (imagine Spottswood in Key West). All I could think of was dozens and dozens of frantically vacationing munchkins everywhere I saw the rental signs. 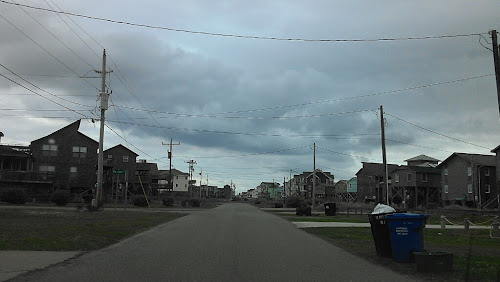 With the best will in the world the bulk of North Carolina 12 looks like this picture below, except for a few curves between Buxton and Hatteras. The speed limit is 55, but many people here seem to have difficulty reading the sixes and fives on their speedometers and we followed a number of North Carolina tags doing 65 Florida miles per hour. Old timers remember when the berms weren't built up on the seaward side and they lived with occasional salt water covering the old roadway. By way of compensation they got to look at ocean as they drove along. We didn't and mighty boring it was too. At least it wasn't crowded with summer traffic jams... 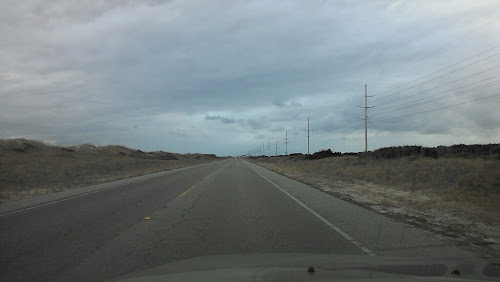 For some people being allowed to drive on the beach is a highly prized activity in the Hatteras National Seashore. I would rather eat crushed glass than subject my car to sand and salt with the risk of groveling round it like a supplicant trying to get it out of the grasp of Mother Nature. The fact that they need to point out that high tide, ie: water! may be impassable (fancy that!) gives you some idea of the chaos that must ensue especially in the summer months. Tow truck drivers' delight! Motorcycles naturally are discriminated against and dogs must be leashed even where cars don't have to be. Weird but true. 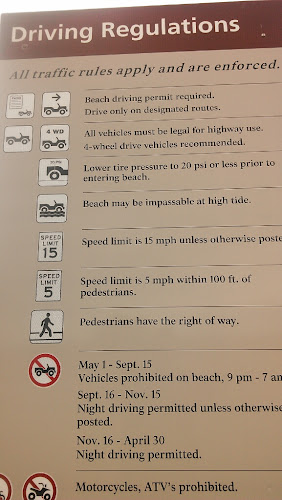 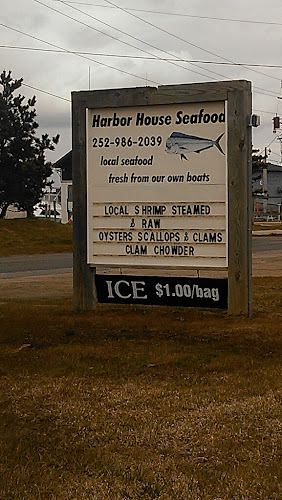 I was right, they sold seafood but the owner was a cheerful soul and said if we were adaptable she could feed us. So she did, shrimp, and chowder and hush puppies, right there in the fish store as customers came and went. 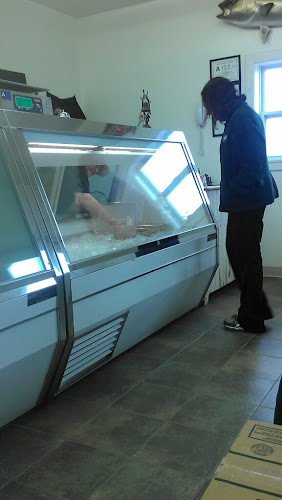 Vickie was her name and her husband and son were the fish catchers. Her son was featured in a magazine article about the local fishing, an activity he has loved practically since birth. This year the fishing has been awful since Hurricane Sandy has closed the pass and the father and son couldn't get out into the Atlantic as they usually do in winter. That and unusual cold water has made fishing the sound very slow as well... Just like farming fishing is a way of life dictated by the weather. 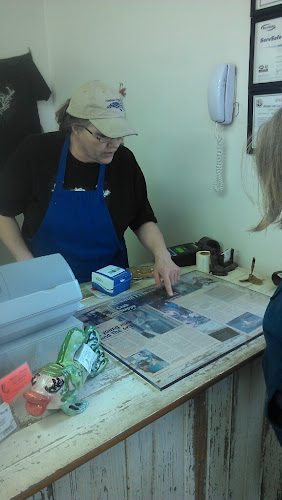 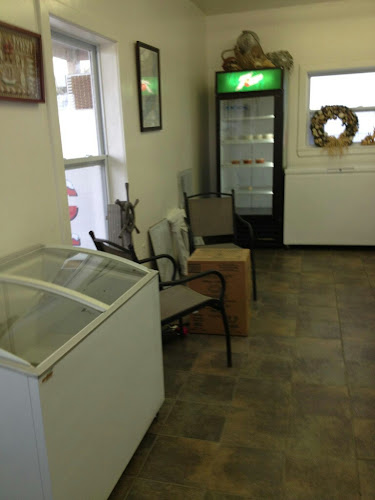 And our deluxe first course, boiled shrimp shells. Not one left. 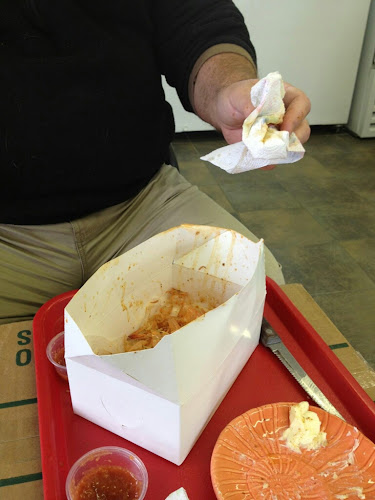 This image was on the wall showing Vickie's son, the blonde one, and a friend figuring how to launch their boat when the adults were too busy to do it "properly." He was not to be denied...young Tom Sawyer! 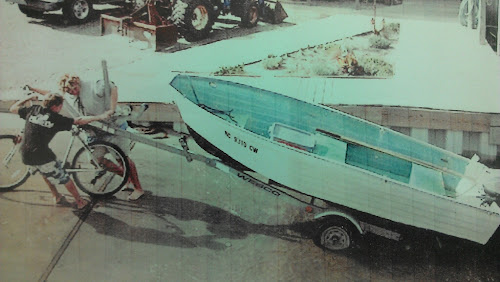 Hurricane Sandy messed our plans, or tried to. The formerly thirty minute ferry ride from Hatteras to Ocracoke is now a sixty minute ride after the channel was silted in by the storm. Fishermen located an alternative outer route that turns far out into the sound before taking the long way back to the Ocracoke landing seen in the far left of the picture below. 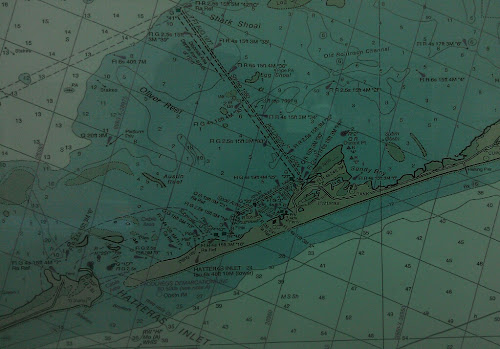 The North Carolina Department of Transportation treats the ferry as nothing more than a segment of Highway 12. Distances to Ocracoke treat the water as dirt and do not take into account the vagaries of ferry travel. The ride is free in both directions (hate that government, you haters!) and ferries run from 5 am to at least ten at night. Dogs stay in vehicles, there is nothing to buy on the boat though there is a cabin upstairs to get out of the weather. 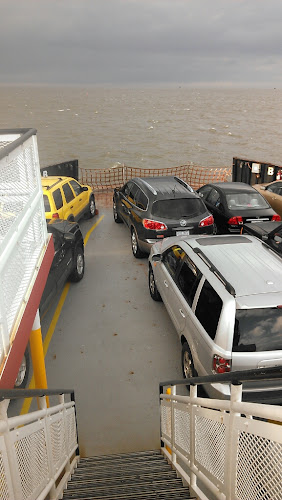 Which was just as well for pedestrians and cyclists on board (there were no motorbikes). Seas got rough far out into the sound and whole waves crashed over the bow of the ferry covering the cars in front of us and spraying our Fusion with salt water. I lost my cellphone signal and was forced to stop updating my blog. It was hell I tell you. 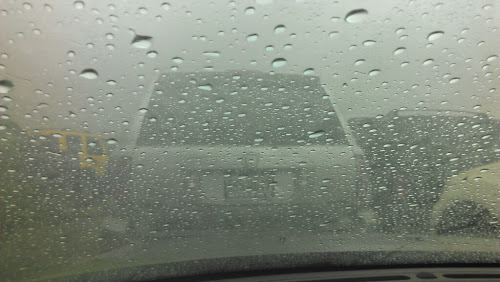 Then it poured with rain. Welcome to Ocracoke... and another 13 miles of long straight Highway 12 to our bed and breakfast. 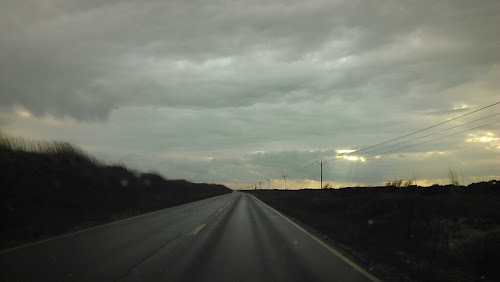 And on Ocracoke we found Bilbo Baggin's pantry, Cheyenne found dog walk heaven, there is a Mexican food truck that cooks astonishing tacos and we discover Ocracoke Brogue. Weird enough for ya?