The movie recently released on Hulu (and in those theaters that are still open) has caused a few ripples among people who live in vehicles.  Its a story of the usual reaction among people who think they know more about a subject than the people who made the film. Most of us aren't secret agents or jewel thieves so it's easier to watch an adventure film for pure entertainment than to watch a film about something you think you know.  This film is about a woman living in a van, on her term she is houseless, not homeless. Van life has hardly anything to do with this form of being a nomad. It's not going to change my life. 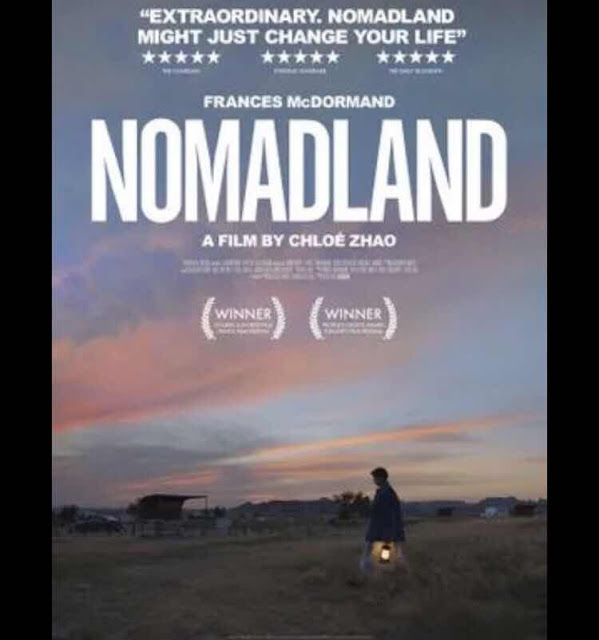 The story is simple enough. A woman, Fern, becomes widowed before the film begins and we see her packing up her life in a small town in Nevada after losing her job and she drives away from her storage locker to live life in her low top older white van. Its not a comfort machine but she has a toilet (vividly portrayed in use as Frances McDormand doesn't hold back) cooking facilities and a bed. The whole tone of the movie is slow paced, meditative and unhurried. Its dark outside, snowy and cold much of the time. Fern goes hither and yon, finds temporary work, makes friends and lives a low key van life. She is supposed to be standing in for older workers, many women, who have made little money earn less on social security and find a mobile life better than being on the streets. Fern has opportunities to live in a house, to return to her family, to find love with David Strathairn and she makes her choice. Van Life? Retirement? Solitude? 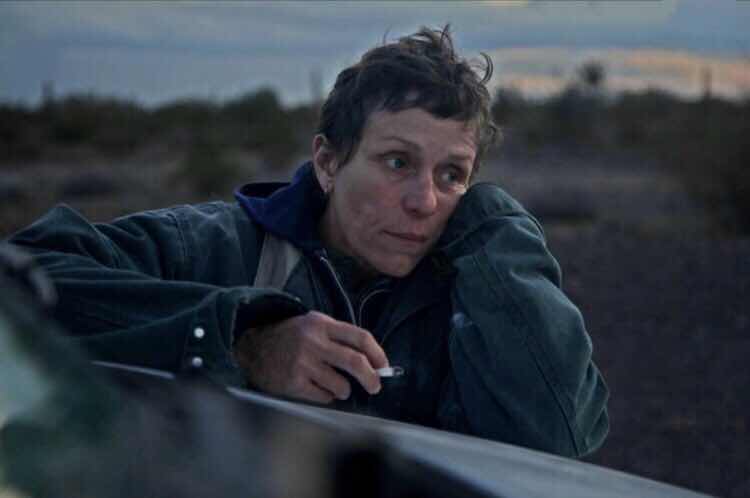 For me life in the United States has been a stroke of luck, or genius on the part of my youthful self. However I have skated by with decent jobs when I wanted them, no family obligations, no expensive divorces no child support. In many respects I have lived a charmed life, assisted in no small measure by a  forward looking wife and a pension plan. For many Americans old age is no golden retirement, no happy fade to black but a struggle to maintain sanity and mental health, to maintain relationships and find a way to live with not much money. That's not van life. Swankie has cancer and a limited time to live. Saying good bye to Fern is a tough moment in the movie. (In real life she is hale and hearty and doing fine in her van). It's not van life. Its people in vans living on the edge of dissolution. 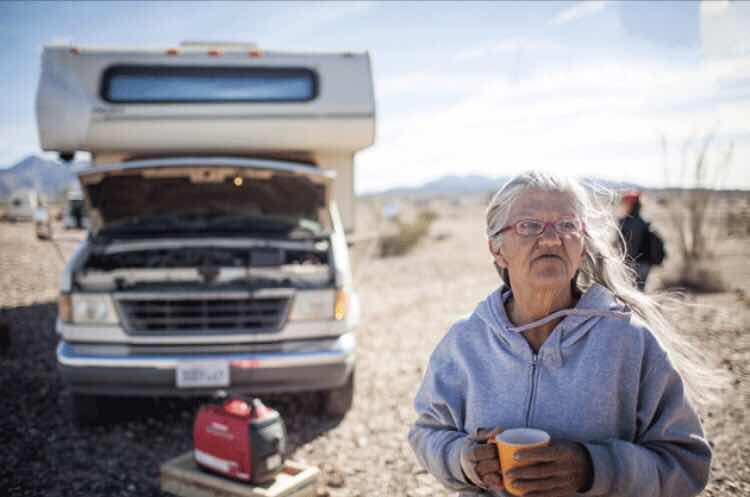 What strikes me as a bit odd is how the generalizations sweep everybody who is affected by the movie. When I decided to have a mobile retirement I found myself deluged by  Instagram pictures of youngsters living their "best life" as the cliché has it in immaculate vans and the skimpiest of bikinis as though that was my goal. I'm really not delusional. My own path is somewhere I hope between the  forced van dwellers at the Rubber Tramp Rendezvous (below) in Quartzite and the mad YouTubers making money off the self delusion of dreamers paying others to live their fantasies. 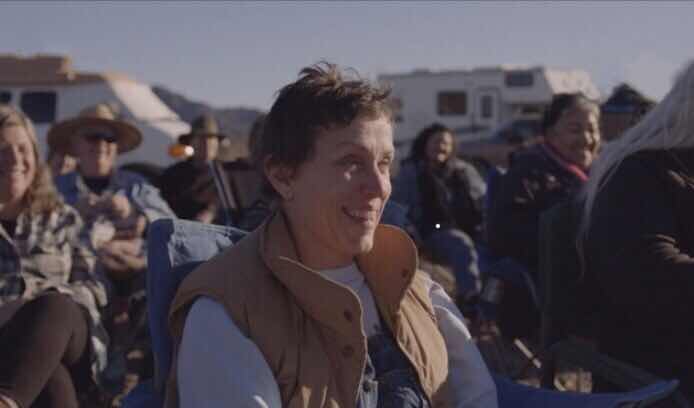 I am very fond of Bob Wells (pictured below in an unflattering portrait) an Alaskan who was forced into a van in great misery by an unhappy divorce and who quietly and efficiently adapted to life in a  van, hunkering in the desert and learning how to make do with a social security check by his account of $1100 a month. He has a stale website where I found him but he has moved to YouTube where he makes some $75,000 a year, by others accounting and attracts the usual band of desperate trolls and character assassins. He has loosely organized a charity designed to help equip people with simple rolling homes to get them out of homelessness and into vehicles, he has advice and encouragement for the lost souls forced into vehicle living as well as the luckier people who choose to do as he does. He makes a cameo appearance in the film and reveals his own pain and it is perhaps that couple of minutes that has galvanized van dwellers to do so much navel gazing around this movie. 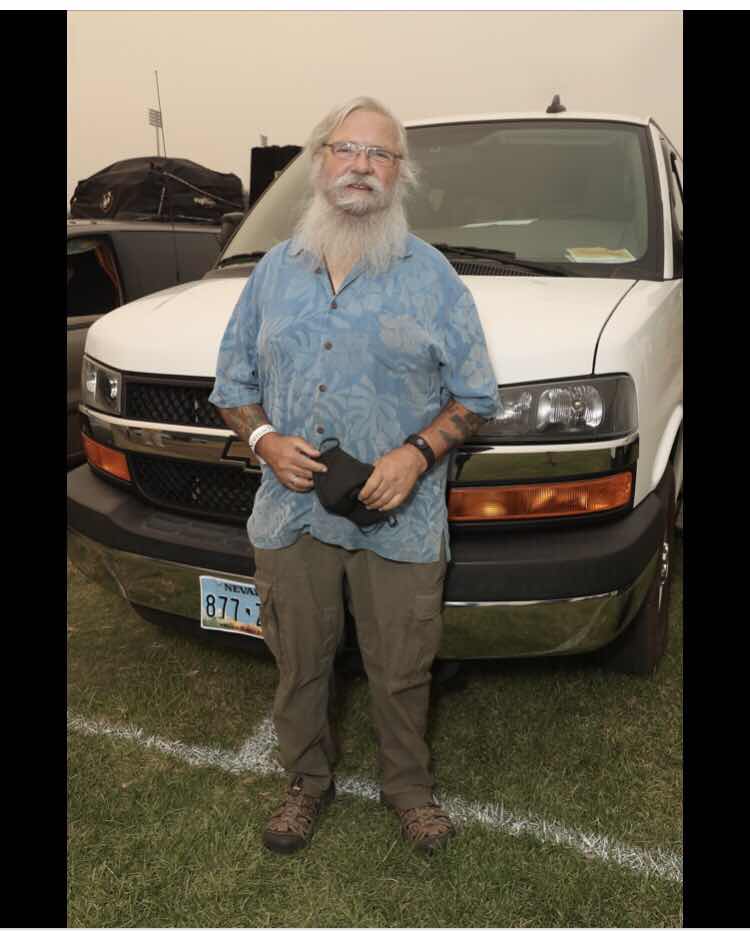 My own thoughts about Nomadland center on the work of former Key West resident Barbara Ehrenreich who documented in old fashioned books the plight of the working poor in so many different guises.  To me, from my middle class unencumbered perch Nomadland speaks much more to that reality than the reality of life in a  van.
Posted by Conchscooter at 12:00 AM No comments: