Every other week I work two nights as opposed to six on my "long week." So, on my short week I do chores and take my dog on extravagant walks, which this week has coincided happily with a very minor but very refreshing cool front. 75 degrees days are entirely acceptable to my wooly haired minor mammoth so I figured I had one last shot at getting to check out the Sugarloaf Loop before summer sets in. 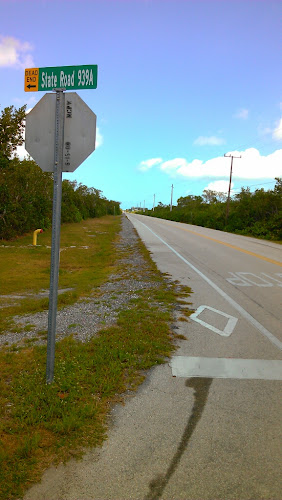 Key West Diary: Sugarloaf Loop Road This picture below is of the vast emptiness of Old State Road 939A. 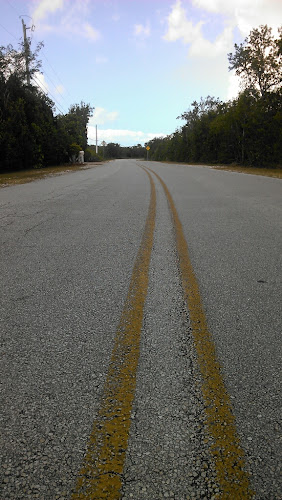 I took that picture yesterday thinking to illustrate how empty the Keys will be after the temporary residents of winter have left. Yet Cheyenne and I were not alone at the junction of 939A and Sugarloaf Boulevard. There were two other cars parked next to the entrance to the Loop Road. Oh well, it's hard to be alone on small easily accessible islands! 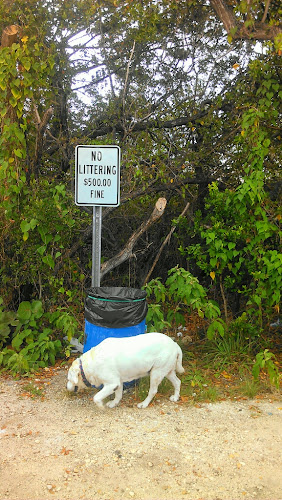 People do love their signs, so I am forced to wonder if anyone has ever been fined five hundred bucks for littering. Conversely do you suppose there is a dog to be ware of below? Do two "posted" signs double the value of one No Trespassing sign? 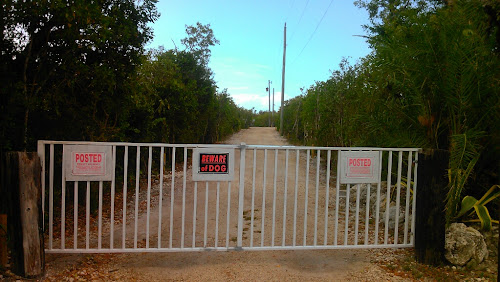 This fancifully decorated gate is just over 17 and a quarter miles from Whitehead and Fleming Streets, where Mile Marker Zero marks the start of the Overseas Highway at the Courthouse. 17.270 miles. 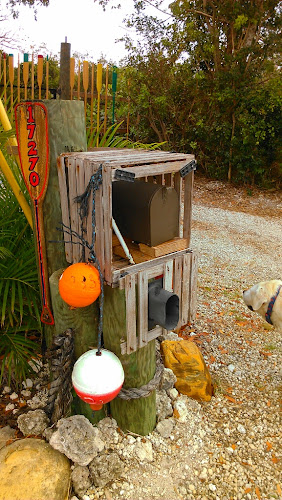 The entrance to the Loop Road is also heavily signposted. I wonder if we can ever return to a society of rational self reliance and common sense. 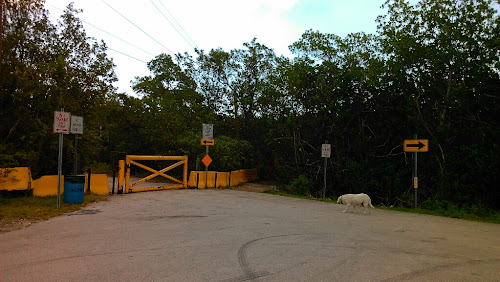 With so much signage is it any surprise the artists take it upon themselves to add their two cents to the freshly painted barriers? This one is a tad bit obscure but it probably means "No Sitting." 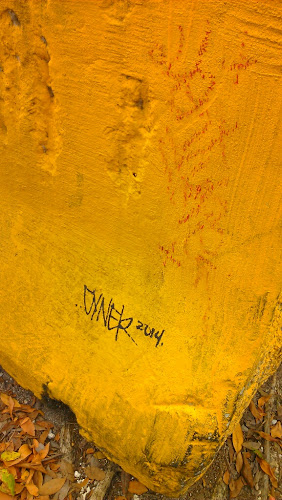 Cheyenne ruined any hope I had of making it to the bridge three hundred yards up the Loop Road. She stopped and looked at me in that way she has so I obediently turned tail. 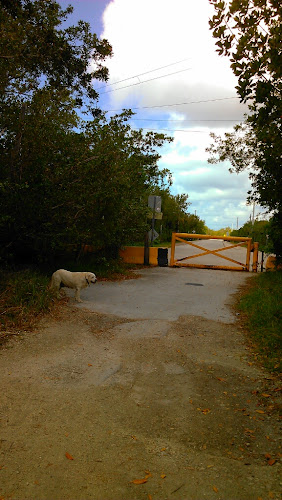 I hate gunfire calls when I'm at work. "I know shots...I recognize caliber so-and-so shots...I have experience..." People always know they heard gunshots. So we dispatchers obediently put out a call for gunshots and when the officers hear that magic word on the radio their hackles go up. That's when I have to sit there, behind two locked doors and hope the terribly experienced callers are wrong again and they really couldn't tell the difference between a gunshot and a fire cracker... So far so good and no one I work with has been shot. But what a weird road sign. I suppose people like to drive these lonely four miles to find a spot to loose off their fire arms. A cheerful prospect! 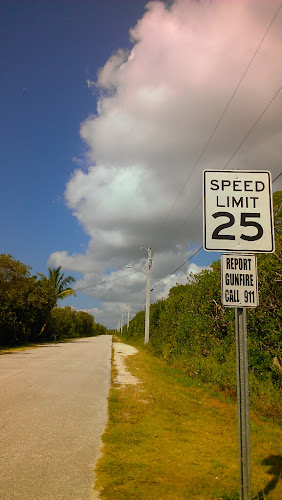 This place has seen better days, gates hanging limply and not a sign to be seen. Call me sensitive but I didn't figure the absence of warning signs was an invitation to drop in so we went on by. The economy may be rebounding in Manhattan and D.C. but out here there are lots of abandoned properties. 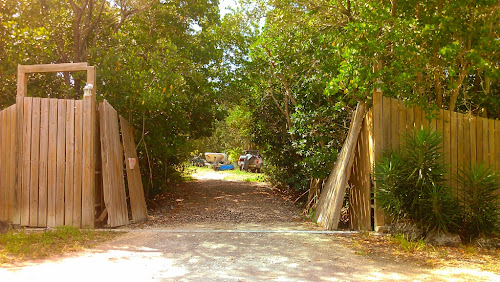 And towards the end of the navigable portion of the highway the asphalt starts to look crappy. 1500 feet to go the sign says and then the road ends. 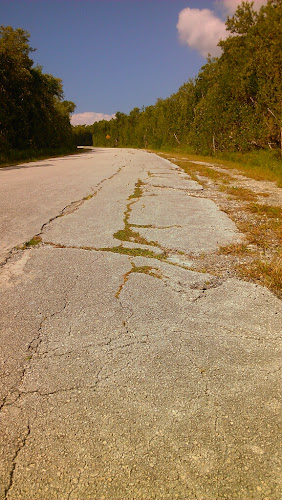 Which was where I found a bunch of people streaming out of the wooded trail necks craned skyward. They said they were bird watchers. They saw frigate birds and cat birds which I thought was an odd name for a bird. Cat bird sounds like lunch for a pussy. I left them staring aloft as though spotting the Holy Grail. 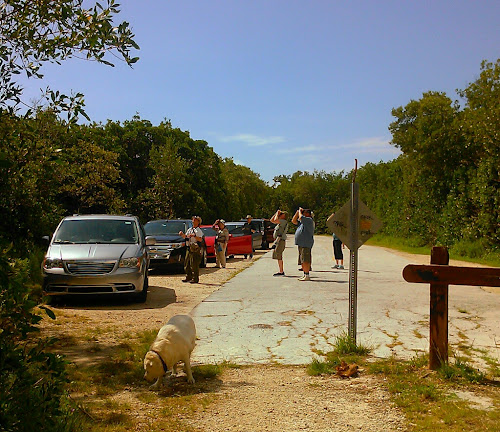 "A juvenile and an adult female" an authoritative voice called out as they craned their necks. I looked up and saw two black specks highlighted against a white cloud far above. Even I know how to recognize frigate birds, often seen floating far above the waves far out to sea. They have distinctive crossed tail feathers, but I'm buggered if I know what a juvenile looks like a quarter mile away or even right up close. Then another lot came tramping down the foot trail, the former state road now abandoned to mangroves. 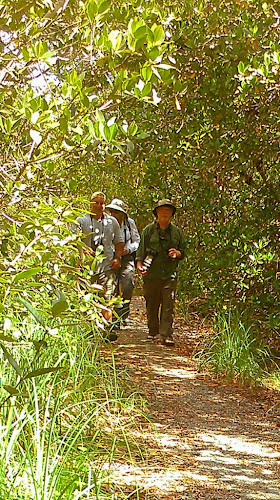 See the dog? Once again deciding she was going that far and no further. The last time we walked the four miles to the end of the trail I ended up carrying her out. Key West Diary: A Short Walk On Sugarloaf Key I think that fiasco was the beginning of the end of Cheyenne's faith in me as a mangrove guide. We did overdo it a bit. 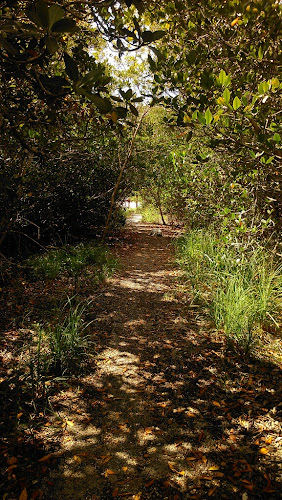 The pretty little park back at the bridge is looking a little worn. The gate has been smashed as though by some dipshit determined to prove that vehicles can drive into the park... 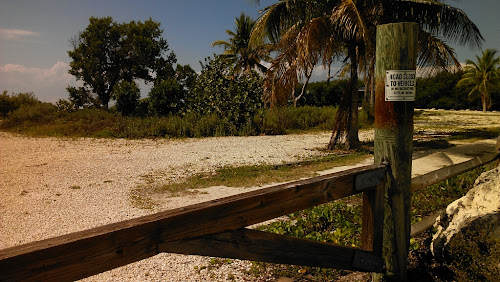 ...the bridge on State Road 939A was looking unusually picturesque so I took a photo, though... 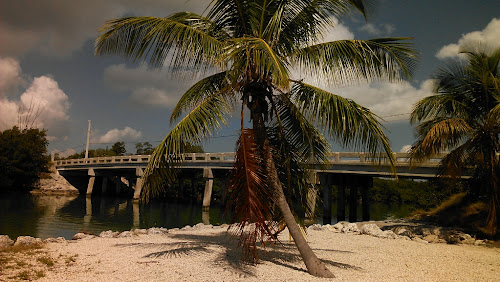 ...this is the view most people come to see here: 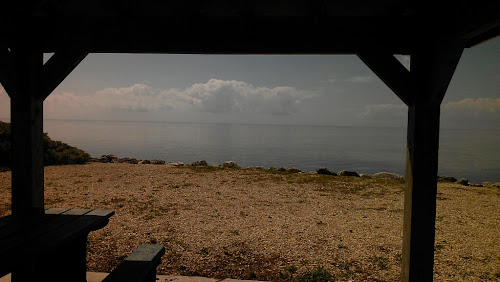 A boat came zipping down the canal from God knows where, under the bridge and out to sea:

A fishing boat pirouetted interminably chasing it's floats and rending the silence with it's endlessly buzzing engine. 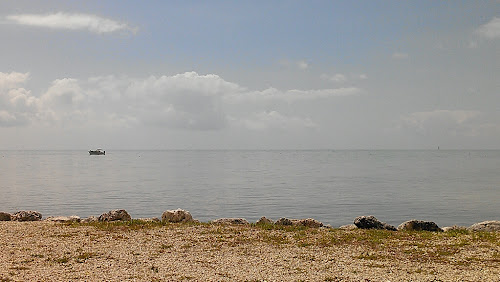 Even a couple of kayakers who put in at the kayak ramp in the park contributed their own raucous debate with their silent craft. He sounded like a small steam engine struggling up a steep grade as he humped the two person kayak from his car, thumping the stern periodically as he struggled. Once they got in the boat he issued instructions to his harassed woman with decided tone of voice violations which made the man in my pink Crocs cringe. "Not like that!" And "Where's my phone?" And "This way!" And on and on till mercifully they splashed round the corner and were out of ear-sight shot. They looked good though against the green and blue and white. 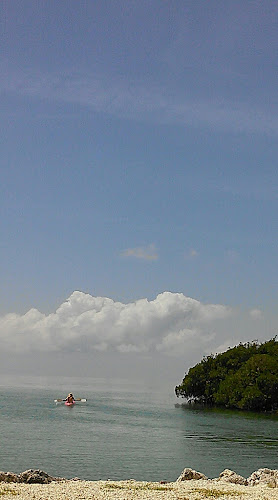 Cheyenne got up, shook off and looked at me. I obediently closed my book and got up to follow her. She was ready to go home. 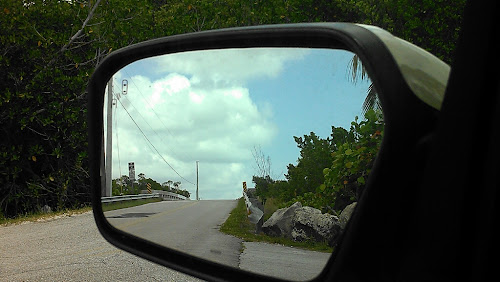 We drove at the speed limit, alone at last, with only this peculiarly worded threat to remind us of the people we had met and signs we had read in the unsettled part of a Sugarloaf Key. 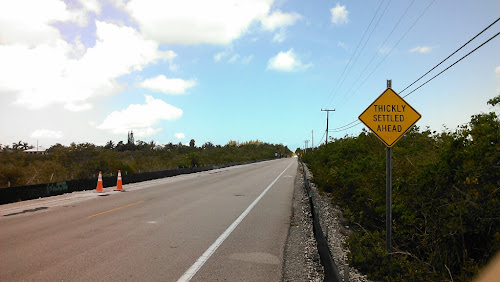 Thickly settled indeed. Well, even if they aren't too bright do we really need a sign pointing it out?