Sports in Key west are hugely important to the parents of young Conchs. Boog Powell played in the major leagues and because I am sports illiterate let me allow the Baltimore Sun to tell his story, which, as they describe Key West as being seven and a half miles long may not be the best source. He still lives in Maryland they say, Boog Powell, celebrity traveler - Baltimore Sun so that should give them some credibility with stories of his professional life... 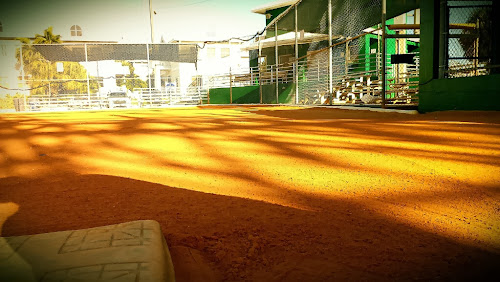 There are a large number of sports fields wedged in two city blocks between North Roosevelt and Flagler, and Kennedy (13th Street) and 14th Street (also known as Glynn Archer Driver- very confusing!). They share the hallowed ground with Poinciana Elementary school, a fire station and a skateboard park. They look vast to me, child free as I am and like I said sports illiterate, but a recent meeting brought up the point that there are too many children and too few places for them to practice sports. 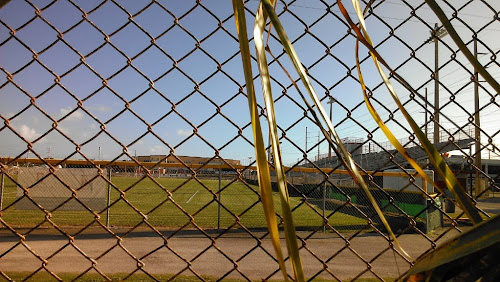 It seems odd that in this town which is actually but four miles long though perhaps the Baltimore Sun meant to indicate it is almost eight square miles in size overall, there should be large tracts of open land, neither preserved nor actively used. Right across from Boog Powell Court this open space is a storage area I believe for a construction company. Not exactly intensively used. 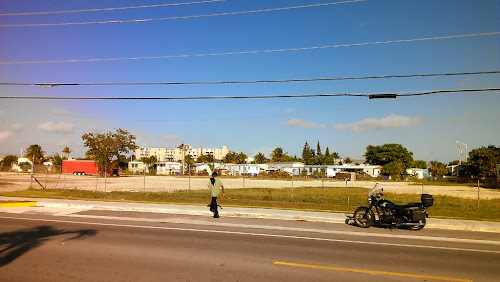 I was disappointed to hear that practice fields are in desperately short supply, because as an outsider to the problem it seems to me the city has done a lot for the young people, including the aforementioned skate park, much longed for, and the shady roller hockey rink behind the high school: 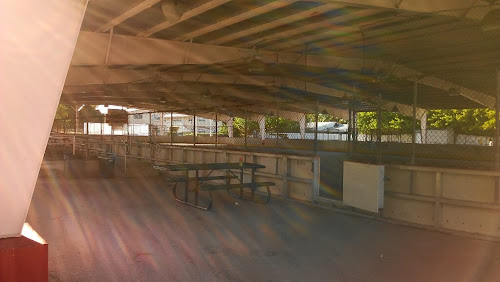 The discussion came up when city planners started suggesting ways they might like to alter Higgs Beach and Park which is actually Monroe County land on the south shore of the city. There has been talk for a while about making changes to the land including moving the street (an extension of Atlantic Boulevard actually) away from the waterfront. A city meeting unveiled an assortment of plans to howls of protest according to the paper. The dog park might be split in two with small dogs being put here, in what is currently Rest Beach at the foot of the White Street Pier. 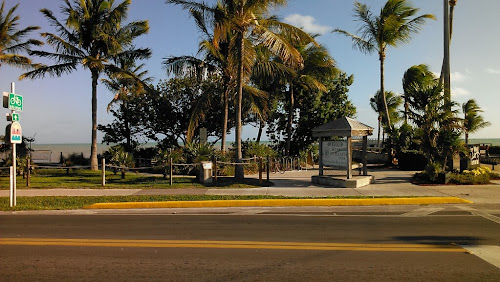 The Wildlife rehab center might be moved the planners thought, to land next to the airport, and from that might come the big dog park... 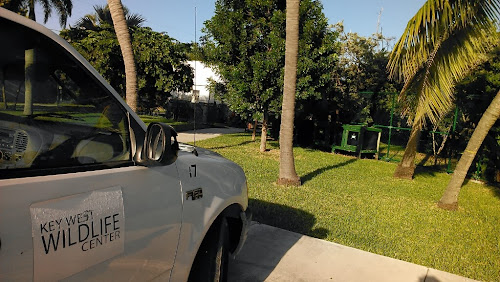 ...and an extension of the well used bocce courts. Which seemed to leave bocce players the only happy campers in this whole re-shuffle of Highs Beach. 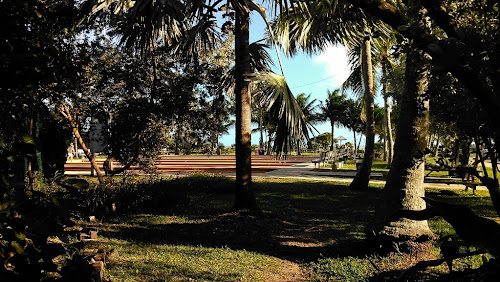 Expanding the pond is part of the plan and moving Atlantic Boulevard through the middle of the park to allow more active use of the waterfront is also under consideration. One comment in the paper pointed out the landing antenna for the airport is in the middle of these grandiose plans and the FAA might have something to say about that. The tower is protected by an ample fence designed to keep people away and protect passersby from radio waves emanating from the tower. 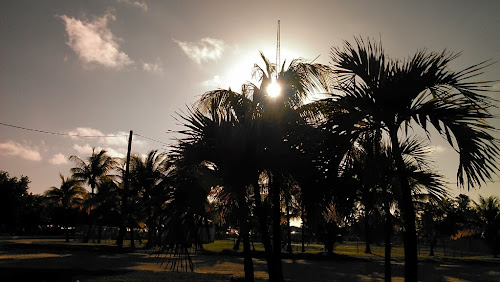 The dog park currently is located under the trees in the picture below, and it was created with thousands in private donations after the land was given for that use. For a while it was threatened by the discovery of apparent human remains belonging to the African cemetery across the street, but somehow that was all cleared up satisfactorily. Now the dog park users are upset with these new plans.i have to say I did not support the park at the time, I felt like they were cutting up a pleasant shaded walk and my dog at the time had no. We'd of a fenced in area. Of corpse I was wrong, and even though Cheyenne now takes less pleasure in the dog park than Emma did at the time I still see how much use it gets and how trouble-free the whole project has been; and there is still plenty of room to walk an anti-social dog! 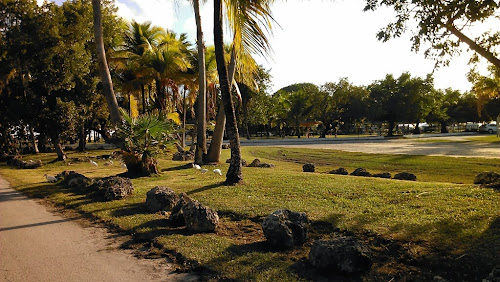 The whole realignment of Higgs Beach brought the loudest protests from the ball park supporters who saw nothing in it for them. They announced that fields are in such short supply waiting lists are interminable and children have to practice as late as ten at night to get some space. Such a situation is untenable and suddenly the Highs Beach plan was being attacked on all sides. Except the bocce players!

Let's face it: Higgs each is not in every respect an efficient use of space even though there is a ton of activity packed into the tiny county enclave next to the Casa Marina Resort. The garden club uses the Martello Tower, there are two beaches, a protected swimming area, tennis courts, ample car parking, two children's parks and the aforementioned dog park. Yet despite all this there is a patina of "unacceptable" use over all the activity, which is of course the homeless bums and the cheap travelers who like to spend all day in their cars hanging around the park showering in the restrooms. That was the main reason I think they fenced off the pavilions as the picnic roofs are known and required adults to be accompanied by a child in that area. Solved the problem of bums drinking and carousing there...Until a branch fell and to "protect the children" they cut down every single casuarina and left the place a baking desert. Similarly I think the dog park got the go ahead because most of those picnic tables were used exclusively by bums who frightened off the good burghers seeking a space for ad family gathering al fresco. 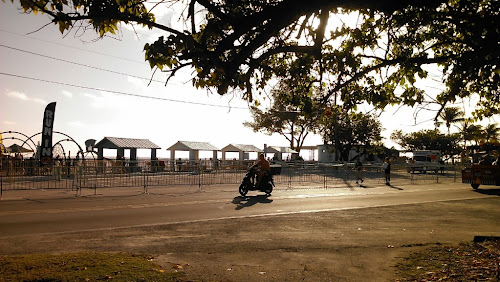 So ow, if they move the road and slice up the park and shuffle the amenities, everybody gets mad (except the bocce league!) and of new ball fields there is no sign. Problem. 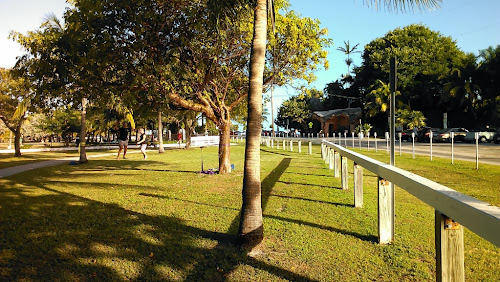 And yet there are odd fields scattered round the city, like this one usually enjoyed by soccer players, not a proper sport I grant you like the deadly dull footballers clumping around in armor and stopping every ten yards for a discussion of tactics. Anyway here it is at the end of Petronia Street next to the Navy Base. 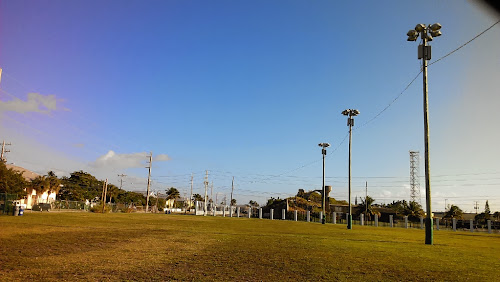 Which conveniently leads me to the 34 acres of land given to the city by the Navy at the Truman Waterfront, former home to playing fields and with enough space to take care of any such need. And yet...not so fast! A proposal to,spend $170,000 for a temporary field got nixed happily by the city commission who preferred to think of such money going to a permanent solution. 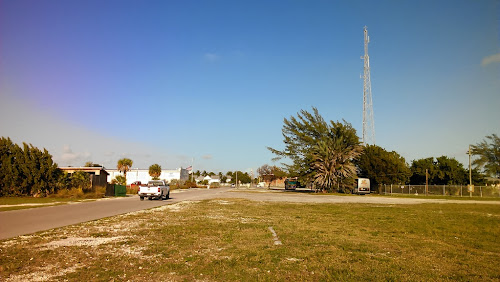 I'm wondering how ball fields will fit into any proposal currently under review which includes plans for an upscale park and possibly a Marina if the Navy relents and allows it. I join with those city residents (which I am not, as I live in the county) who would like to see a more natural, less highly developed project. However in this day and age the question always raised to bat down esoteric projects is how does a park that looks like a park and not a community recreational center pay for itself? Which leads me to wonder why it has to pay for itself. The public works projects of the past are endeavors we take for granted now, Golden Gate Park, Central Park as urban examples of the breed, not to mention our much beloved system of natural parks and wildernesses. 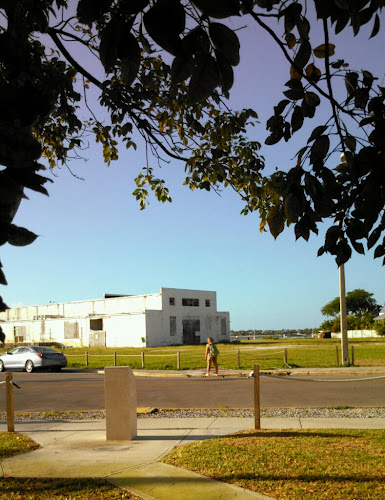 Peary Court used to be a wilderness until the Navy reclaimed the land despite feverish protests by the citizenry. They needed the housing they wanted to build, the Navy insisted. Now they have built housing on their own base behind their gates on Fleming. Key and have abandoned the housing giving it over to civilian use. Ironically enough one of the mjodest land uses of the old Peary Court can be seen in the movie Criss Cross with Goldie Hawn, when they show Peary Court as was, as a softball field. 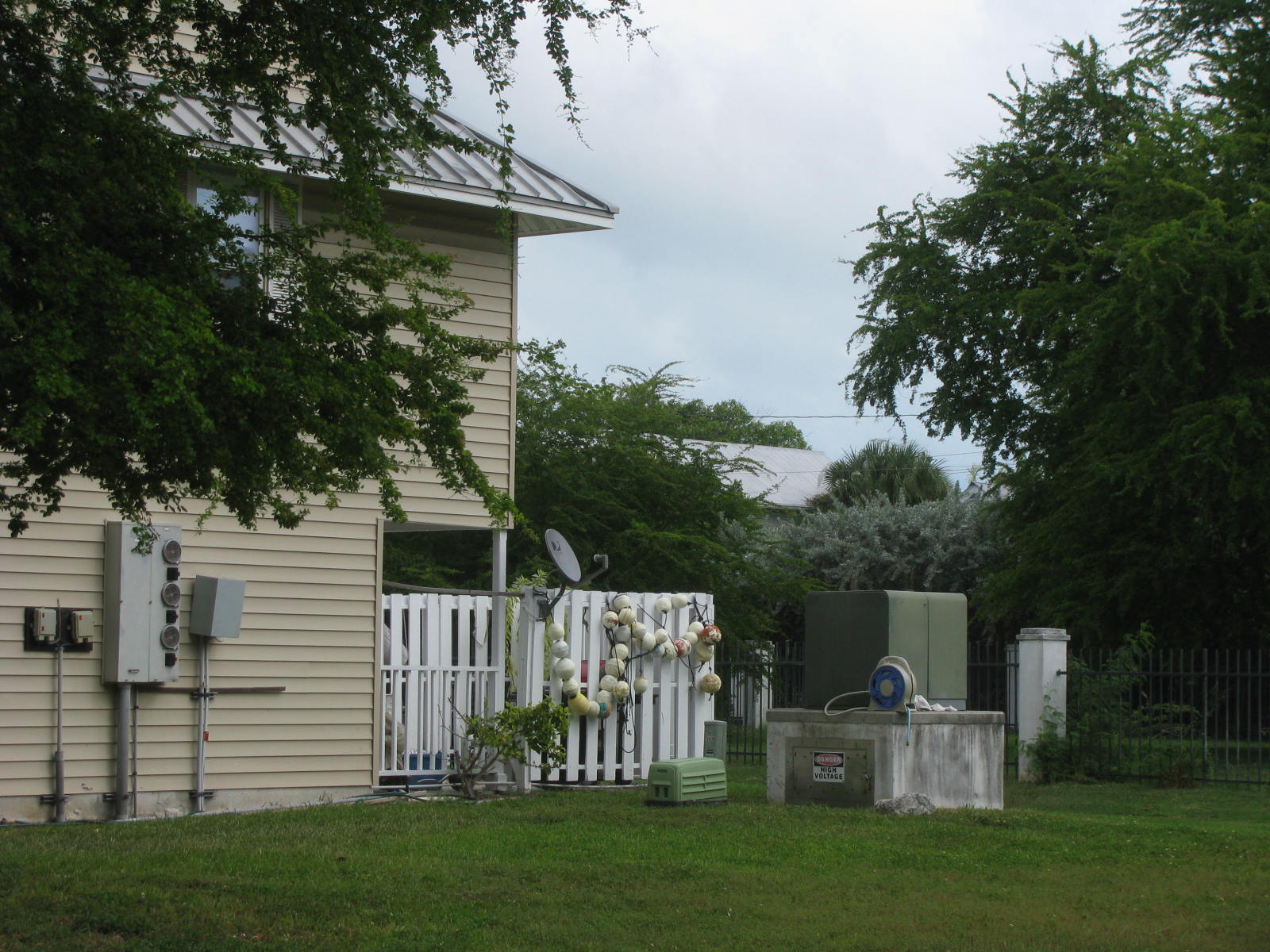 I don't see why the city or the county need to tear up Higgs Beach, but maybe some good will come of it as good came from the dog park. Though less and less do I understand why Truman Waterfront needs to be turned into the sort of park Boca Raton would be proud of. Perhaps if the Navy holds out and insists it needs to have full use of the waters inside the basin. The Marina project will go away and the rapacious Spottswood developers will give up trying to make more of this potentially lovely open space than needs to be done. That would be nice. Oh, and give the kids their ball fields, no?