Getting home from a trip even a van trip requires some adjustment, some time to vacuum the dog hairs, wipe the dead insects off the hood, empty the porta potty (my job) and clear out the van refrigerator (not at the same time) and run the laundry with several loads...and on and on as the reality of back to work takes hold. Our turn around point on the trip was Atlanta and i have to say that was a rather shocking experience to this small town rube. I remember Atlanta as a bustling hub, a symbol of the "New South" industrious modern and integrated. My short stop in the big city was rather different experience and i was shocked in my own provincial way. 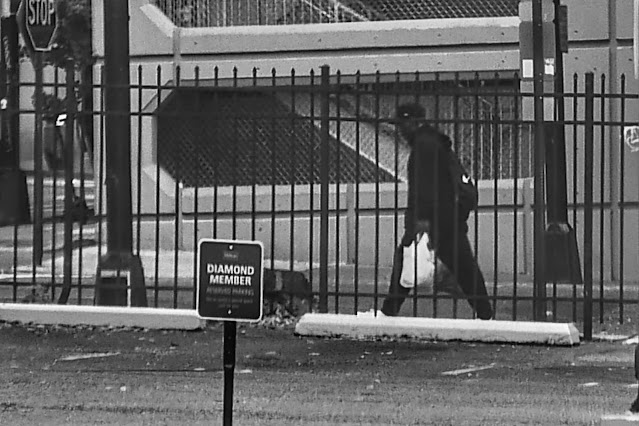 As much as one might like to deny it there is a slight sense of being removed from daily reality when one lives in the Keys. Certainly you feel the difference driving through rural America, and a lot of that is quite pleasant if you assume the job losses and medical bills are hidden behind closed doors, but the effects of business closure and failing services becomes stark and obvious in a city where downtown is the gathering place for homeless people and not much else. 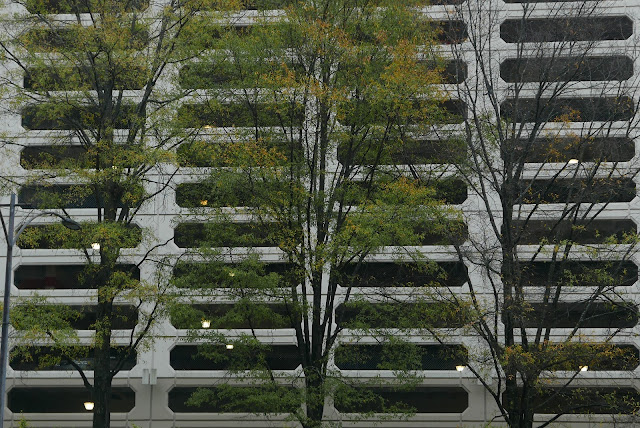 We had thought of parking eating and sleeping on the streets but as a pre-Thanksgiving celebration it just didn't feel like much so we used points and took a room at the inn. It was a decision easy to make and it felt as though we had the hotel to ourselves. Certainly the van had the pick of the parking spots. Layne sorted the room and I walked Rusty. Our plan was to order a sort of Thanksgiving dinner from Empire State South a restaurant my wife was keen to try and she was, as usual, right. 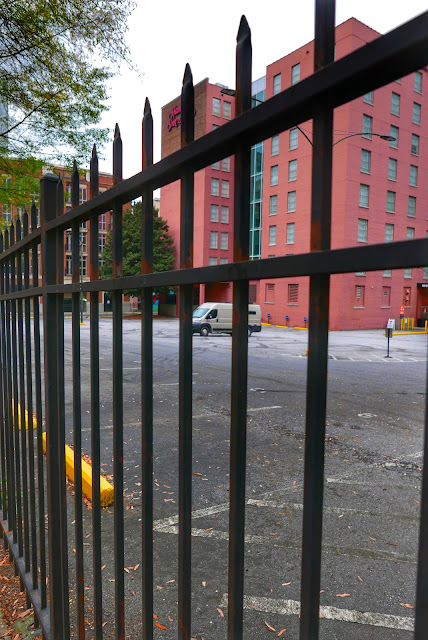 Almost everyone I saw who appeared housed and employed was wearing a  mask so I wore mine even though I was pretty much alone. Most of the homeless were black men huddled in doorways avoiding the sprinkles and the cold air which suddenly struck me as cold and wintery. At last I wasn't sweating! 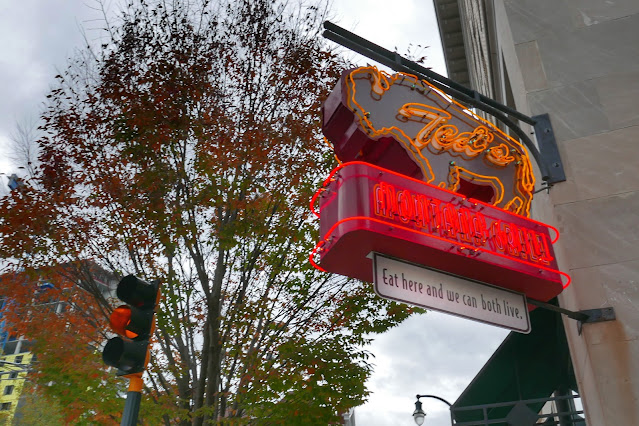 I'm sure on a  sunny day with office workers bustling about downtown would look different  but the city for my brief visit looked defeated by the virus. It was an odd feeling at a time when one is supposed to be thankful. The news from Key West was a mixture of fatal accidents on Highway One and family reports on the struggles of the county commissioner, his wife and daughter, to survive the coronavirus which had laid them low. I saw a lot of prayers offered on Facebook for their recovery but I recall my time in the hospital as a period of much gratitude to the nursing staff who looked after me and I wasn't even infectious. I cannot imagine a hospital ward these days with so many sick, no visitors and the need for universal protective gear. At last report Key West had no available ICU beds available. 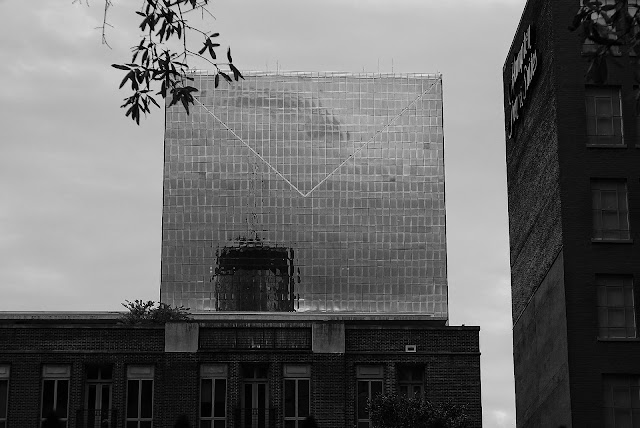 I did manage to cheer myself up by getting Rusty to pose with a suitable piece of public art. 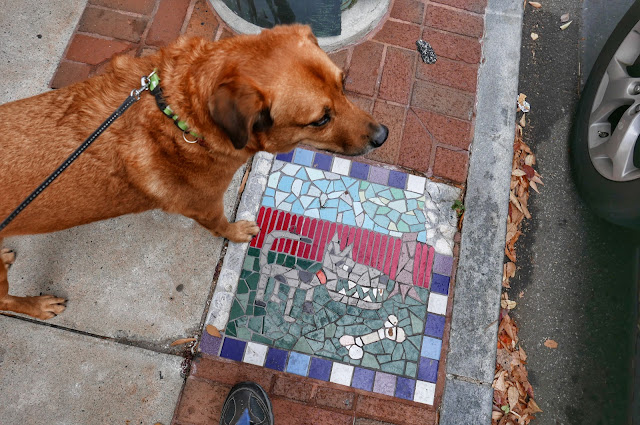 Closed and boarded up. 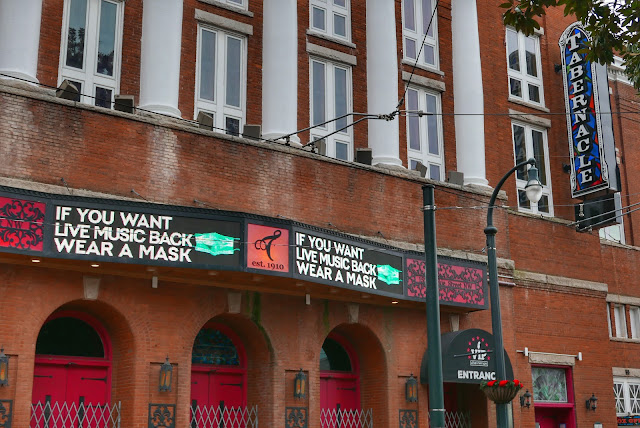 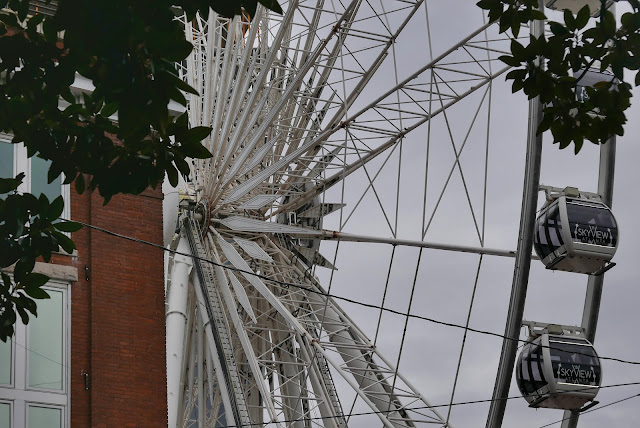 This was supposed to be another Rusty pose looking regal  but I found myself accidentally capturing a slice of street life which summed up my rather un-Thanksgiving feelings. I couldn't even frame the picture properly. 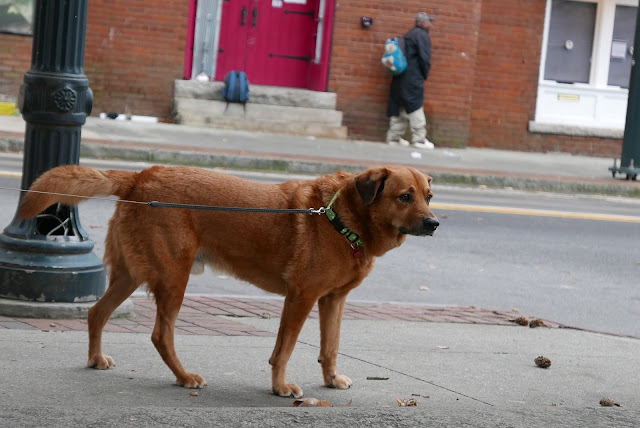 All I could think of was the weird bomber story and the security guard who got arrested in some muddled up investigation and a movie Clint Eastwood made..? I/m sure Google has the answers to my muddled train of thought but I focused on following my dog pas the Olympic Park. I did notice how steep Atlanta is, as though built on some very sharp hills set close to one another. We walked up and down a lot. 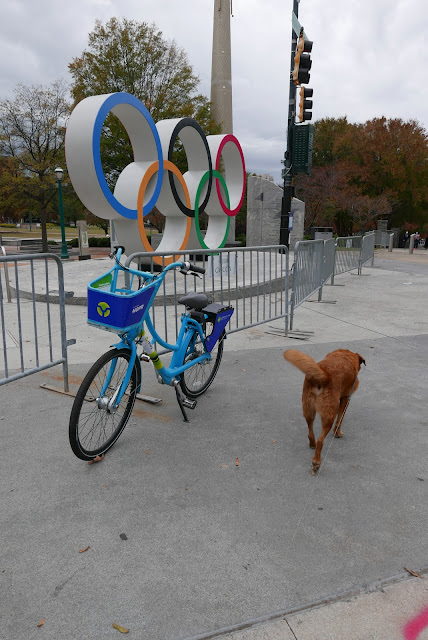 The American Cancer Society seems to be doing well with a vast spacious shiny building: 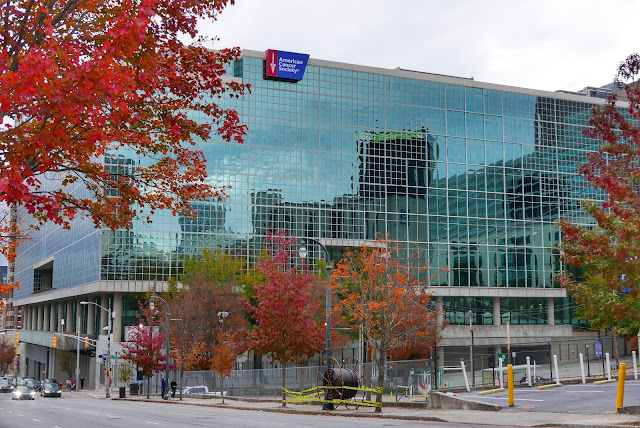 Their message was a reminder that colo-rectal cancer is painful and preventable- if you can afford it. Not a day goes by that I don't appreciate my health insurance. Colonoscopies not so much but at least I don't have to do them, just suffer through them once in a  while. 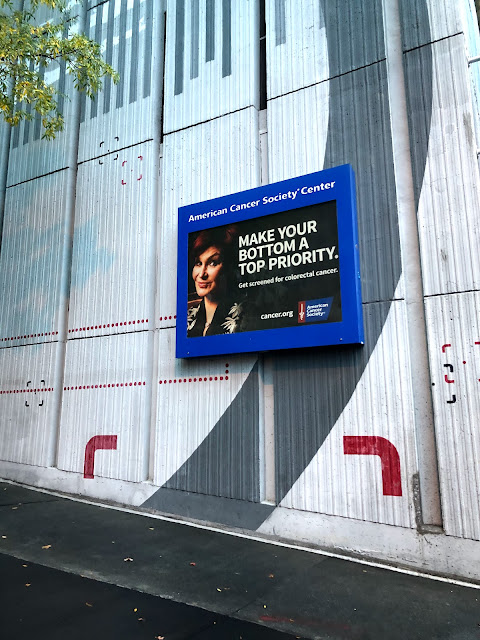 I think I should like to go back to Atlanta in happier times under sunnier skies and get a proper feel for a city that left me feeling excessively grateful that I don't live there. I preferred sweating to unload the van in the familiar heat of the Florida Keys to walking briskly in the cool winter air of a city that gave me a mild case of the blues.
Posted by Conchscooter at 7:32 AM 1 comment: