It's one of those things that happens to all of us; we live right next to this attraction that visitors come from all over to see, and all we do is drive right by every time we go to the mainland. I am a bit surprised I have never previously visited this state park but there it is. I noticed it on the Friday returning from Sarasota, so that Sunday I took the Vespa 58 miles from my house to Mile Marker 85 in Islamorada. 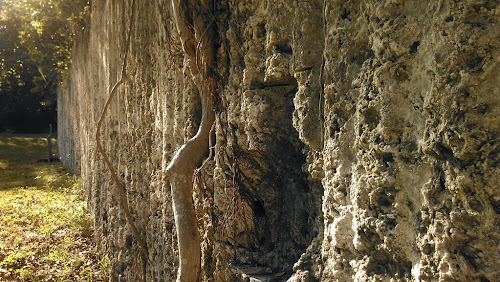 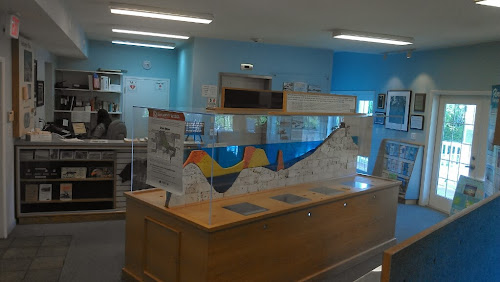 Windley Key it turns out is one of the higher islands in the chain created out of coral reefs that dried out when seas receded, but it's main claim to fame is Flagler's Quarry, because it turns out the railroad used crushed rock mined here go build the rail bed. So the state park has two components, the geologic history and the human history, principally Flagler's East Coast extension railroad.

I have to say I was surprised to see Jack Riepe captured as a young man writing his heart out in a wicker chair in the lounge car of a publicity picture for the 1912 train. He was obviously thinner back then but there he was, penning his immortal prose promoting modern transportation: 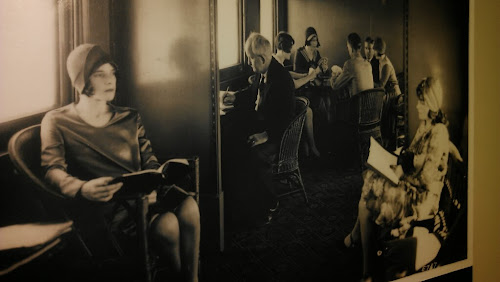 The visitor center is full of the usual displays and explanations: 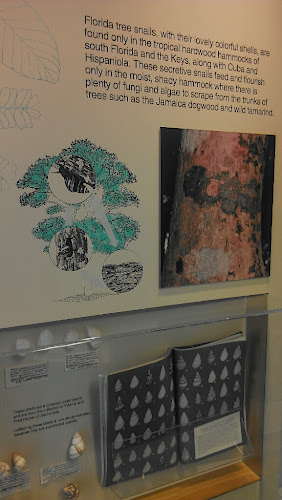 Snails and trains. Flagler bought the Windley Key land for $852 they tell us. Which considering how little people earned, ten dollars a week for trained labor, at the turn of the century it was an enormous sum. 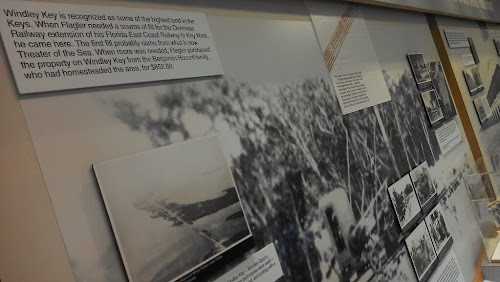 They have excellent historic pictures on display. Unfortunately photography was cumbersome so all people in the pictures have that stolid wooden posed expression to them. The machinery as we shall see is preserved, even if the people have gone to their reward by now. 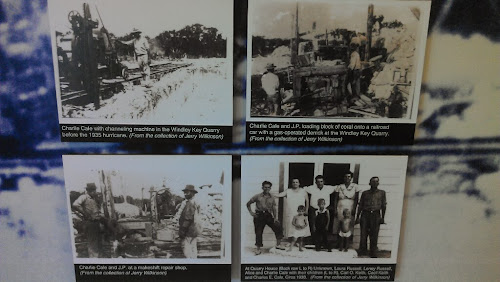 This model explains the evolution of Windley Key over the past 125,000 years (creationists need to skip this bit for the numbers won't make sense of course) when sea levels rose and fell as polar ice melted and reformed at assorted intervals 100,000 and 20,000 years ago. The coral built up and hot left high and dry until Flagler's engineers came along and dug the quarry as represented by the cut at the left. 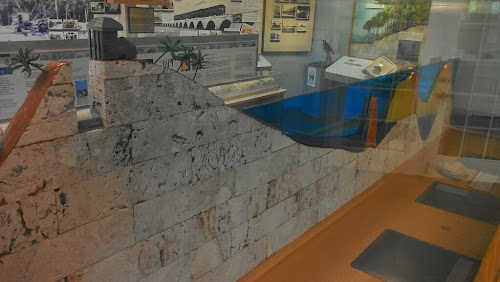 Enough indoor stuff, time to enjoy some trails...outside the visitor center there was a fine example of a channel cutter on its rails. Apparently the machine had a gasoline engine for the oscillating blades on either side that could cut the coral rock six inches deep at one go. 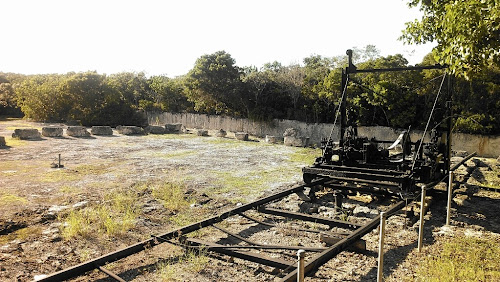 The operator would flush the channel with saltwater and after making enough passes to cut the rock to a depth of say ten feet they would turn the machine at ninety degrees and do the same all over again. Then using wedges or dynamite (!) they would detach the cubes and sell them as ornamental rocks fit for carving. 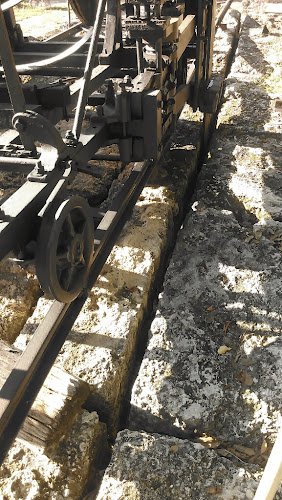 All this effort they figured out when they had done pulverizing the coral rock for use as filler in the rail bed. 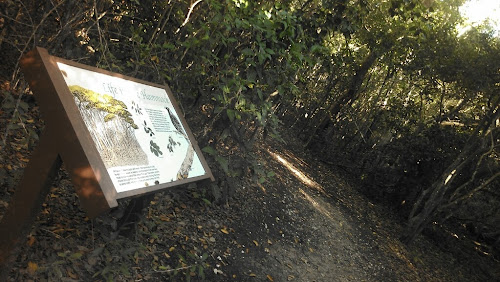 I took far too many pictures of the three trails in the park, but figure it was a lovely warm fall afternoon, clear blue skies, bright sunshine and dry shirt sleeve temperatures around 80 degrees. 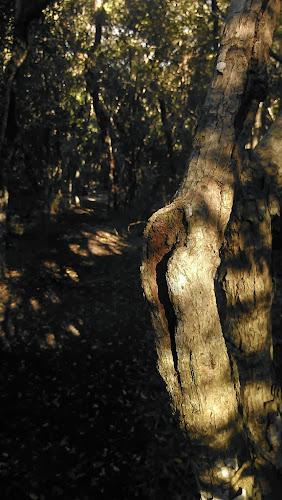 I had the park to myself and I spent two very happy hours wandering around and enjoying the different spaces. This is the original Flagler Quarry: 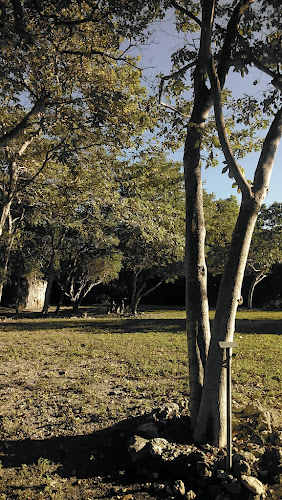 This is what the coral rock looked like after the channel cutter had its way with it: 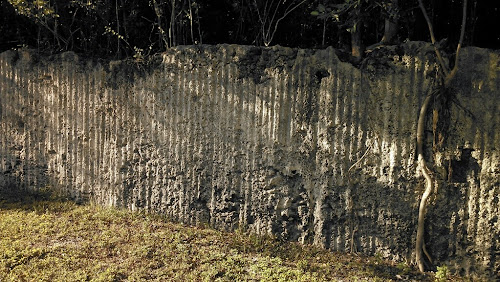 I confess I stretched out on a picnic table and occupied myself gainfully for a little while doing my favorite meditation, which is looking up through tree branches. 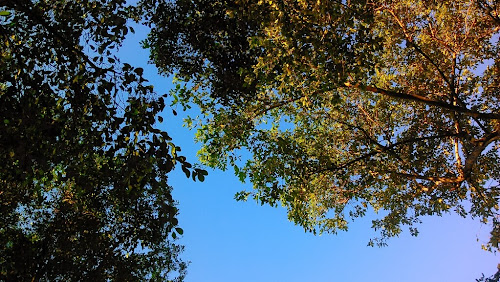 The quarry looks like it would be an excellent spot for a picnic. I believe there is a guppy grocery store in Islamorada near by which might suit that purpose. 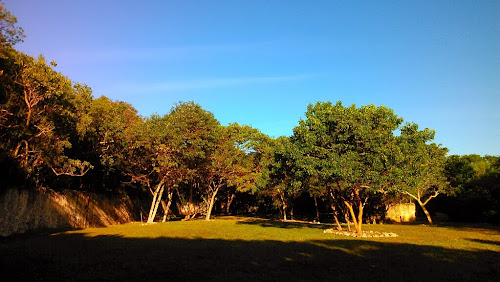 My wife and dog were in Pensacola for the Thanksgiving holiday so I was left to my own devices for this little ride. I decided to take the 150cc Vespa for the sixty mile trip up the Keys. I could have ridden the Bonneville but like they say it's more fun to ride a slow bike fastly than a fast bike slowly. Not that the Bonneville is fast by sport bike standards but consider I took great pleasure embarrassing rude mainlanders in their huge SUVs who passed me on double yellow lines in their rush to get to Miami but couldn't shake me off their tails where I sat at a surprising sixty confounding their ideas about "mopeds" lack of performance! Childish I know. 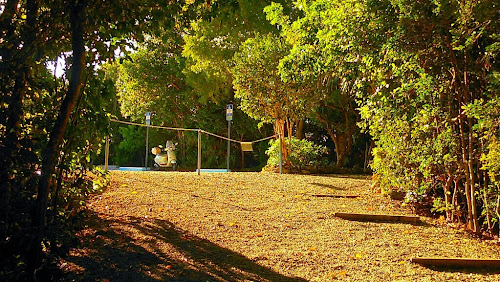 I took the sunset trail first, planning to sit at waters edge and watch the sun descend. 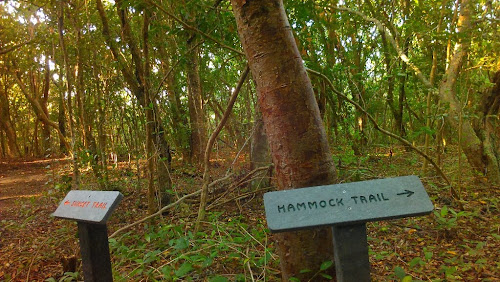 I should like a plant with a silly billy name like "wild dilly." I never remember what they are called after I leave the parks and their handy labels. I did see something special in the visitor center on the subject of labels. Someone, not attributed had put together an exquisite catalogue of plants, delicate water colors under plastic in a binder listing alphabetically all and any plants likely to be found in the park. State parks really are a labor of love, and anyone who tells you government sucks is someone who knows very little of what motivates the best in this country. 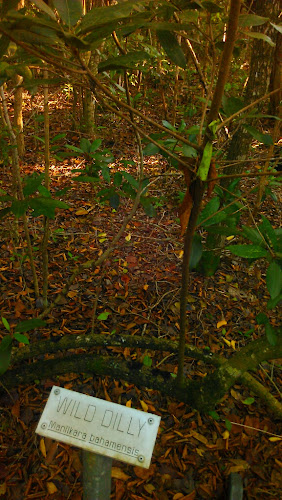 Frankly I could do without the eight trillion dollars of debt W's Iraq War generated but he did make Iraqi oil safe for Exxon. I'd rather see eight trillion wasted building up our parks and roads and bridges but that would be government waste... The sunset trail appears to be a work in progress, rough hewn as it were: 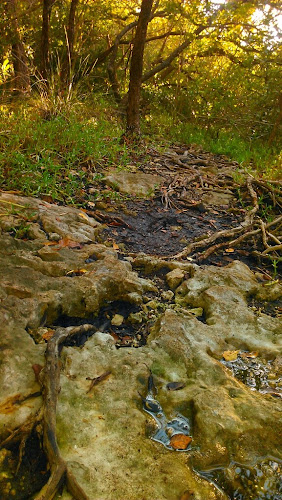 Instead of ending up at a splendid overlook at water’s edge I found this rather brusque notice: 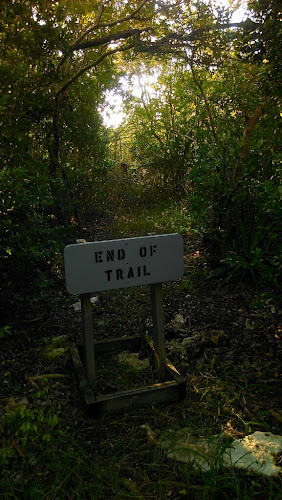 I suppose in the fullness of time this too will get sorted. The Hammock Trail is completed and very nice it is too winding its way for 15 minutes through gumbo limbo and...other magnificent trees. 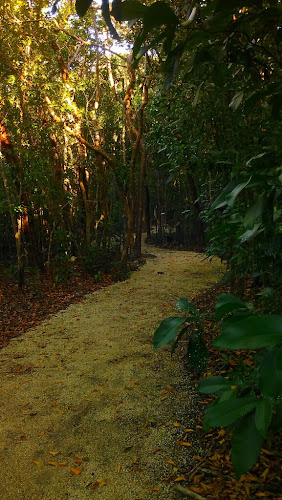 By Florida a Keys standards the land is quite hilly, with dips and rises, elevation changes of six or seven feet, exaggerated by the rock quarrying here and there. 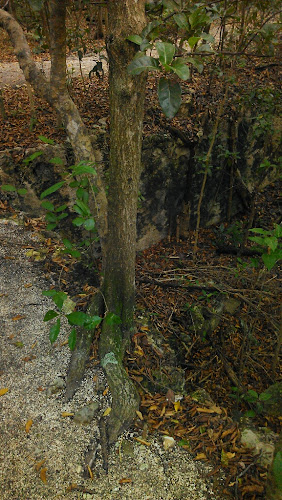 With everything explored and studied it was a quarter to five in the afternoon and time to leave before they closed the gate promptly right at five. According to the ranger it's the time of year these monstrous vast spiders, this one the size of my phone, spin their webs. She said the females are the big ones, the males are much smaller. Nice I said, finally a species where the bloke doesn't have to do the heavy lifting. She smiled, yes but he also dies after only one year of life. Umm... I have naturally forgotten the name of the breed. 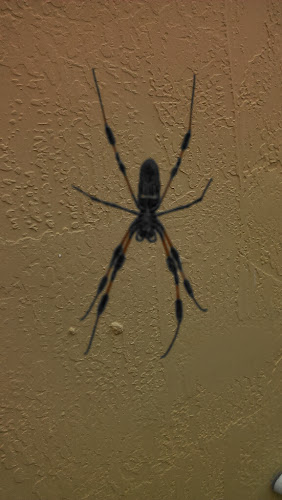 I got out in time, the gate was still open, back to the hurly burly of a busy Overseas Highway. 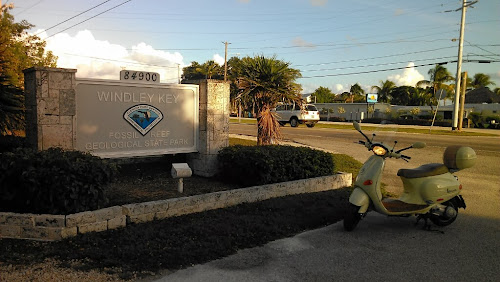 The traffic was mostly headed north back to another week of traffic jams and crowds and big city routines. I pointed the Vespa south and west and opened her up. At sea level with a following wind 55 was easy, sixty felt brisk and purposeful. Cars in my direction were few and we disposed of the below speed limit dawdlers before they realized the moped was crushing their penises by passing them. Then they fell back as though they meant to let the annoying wasp go by. I made good time. 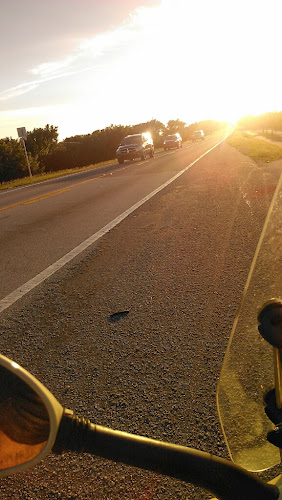 I got home as the sun was setting. I couldn't stop on the seven mile bridge but the sunset was spectacular, orange sun burst through gray clouds and rippling yet smooth water on either side of the bridge. It was good, especially as I got through Big Pine in daylight, barely, before the painful 35 mile per hour limit takes effect.i stopped for gas at the end of my street, 1.7 gallons for 120 miles (7 liters for 200 kilometers) which roughly translates to 70miles per gallon or 28 kilometers per liter. At full throttle much of the time that's not bad. Not bad at all, and great fun. 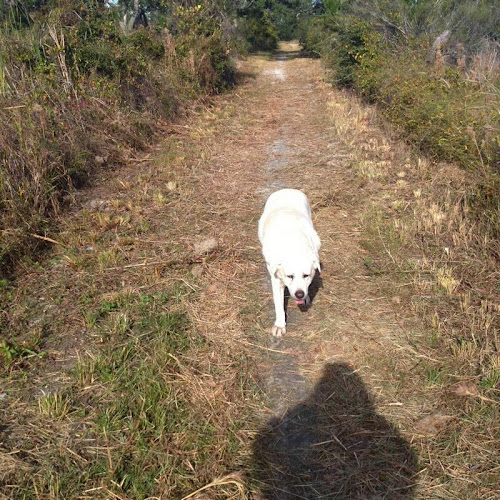 Finally a picture of my beloved who has spent the past week Up North, by all reports having a grand time without me. Seen here courtesy of my wife walking in Fort Pickens - Gulf Islands. Finally we are to be reunited tonight and I can't wait.