This photo essay is a collection of pictures I made as I walked the nature trails at the University of North Florida, Jacksonville. It was a privileged moment in my life as I was on my own and as I ambled with my camera I had no one else to please, no Rusty, no friends, no wife no nobody. 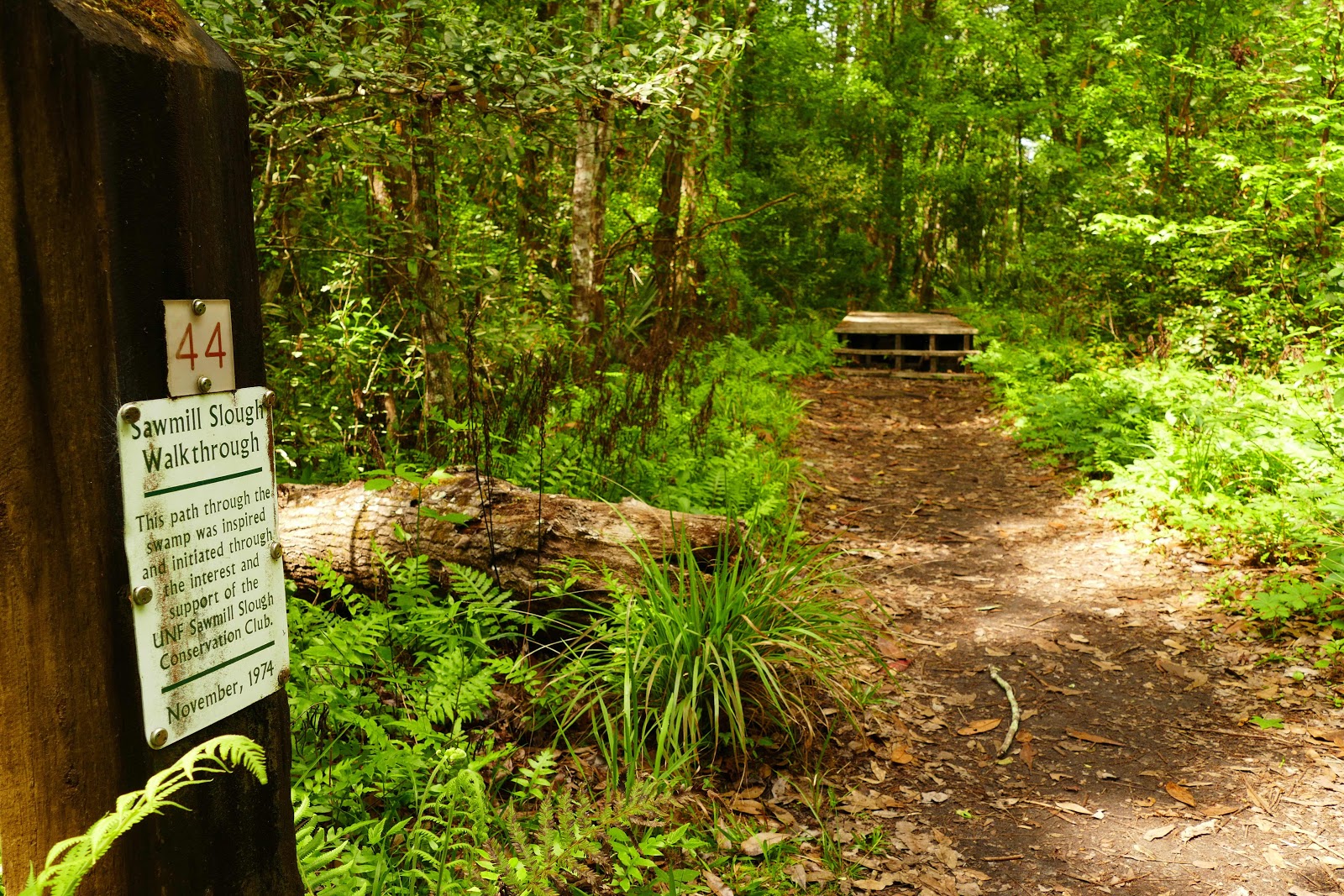 I dawdled as I liked and took my time, alone in the woods. It was a bright sunny day for a change and I had the opportunity to watch the sunlight come and go and create shadows and dappled woods. 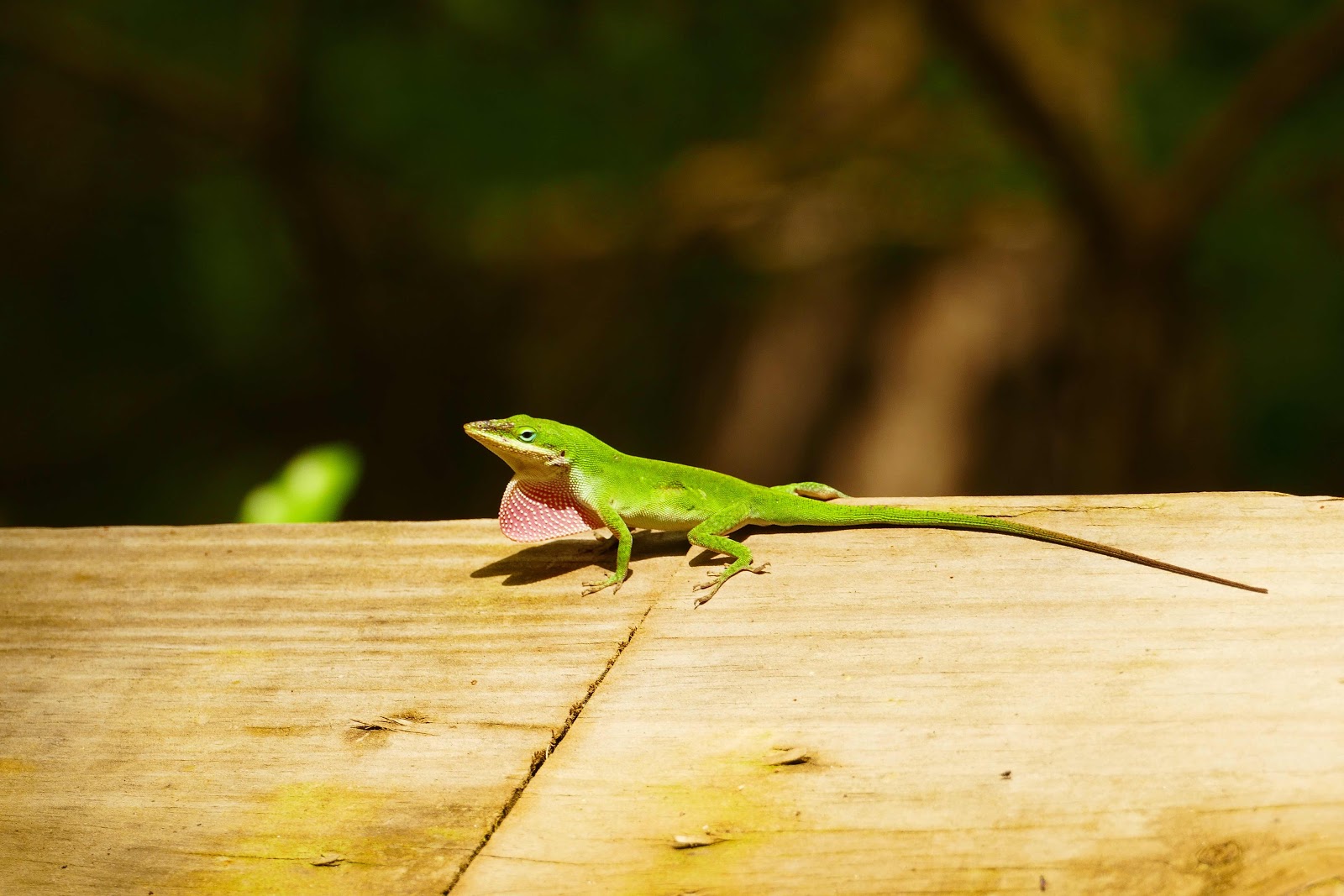 These woods were a chance for me to practice playing with my camera among tall trees: 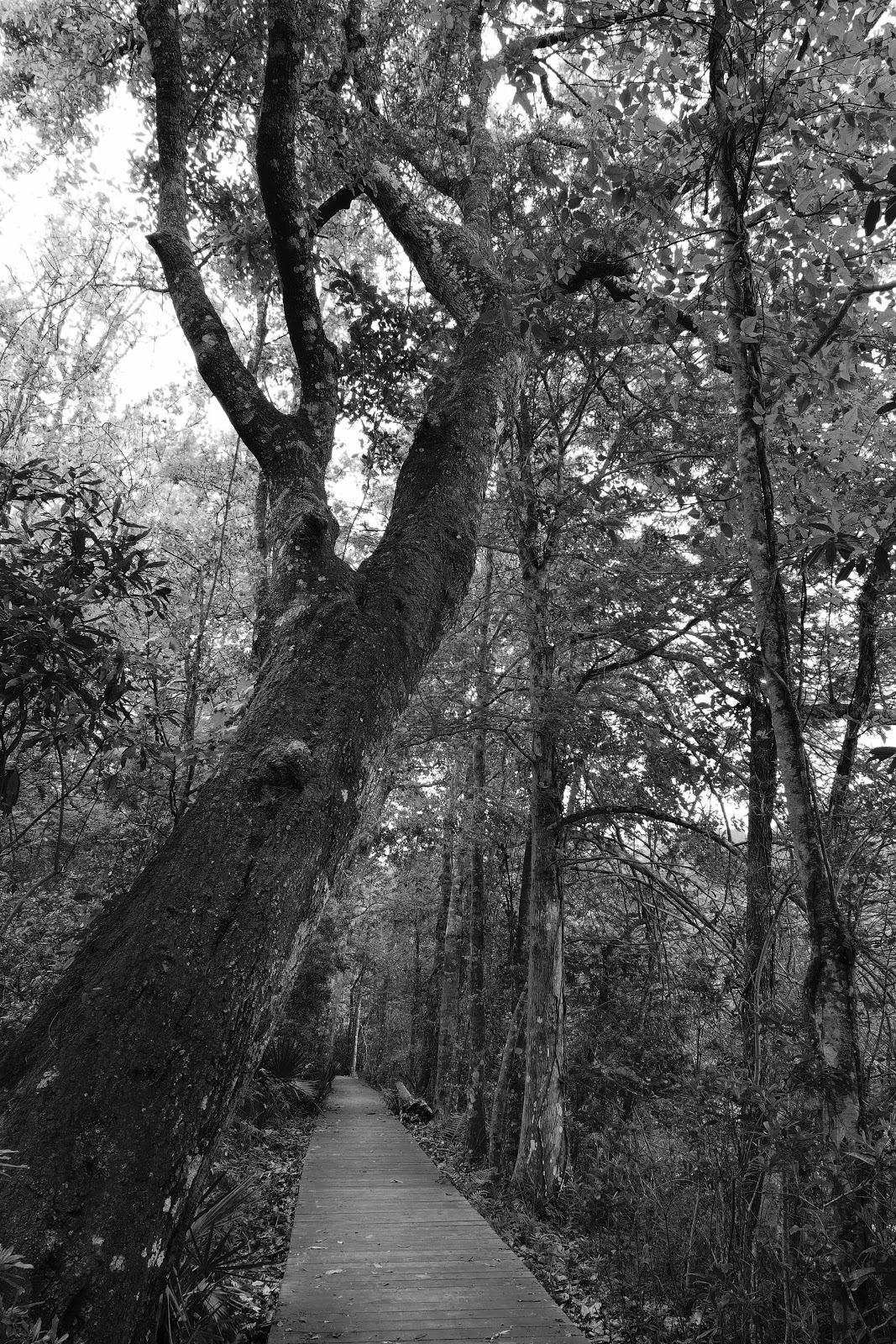 Light and shadows have a different appeal away from the mangroves that are so familiar to me. 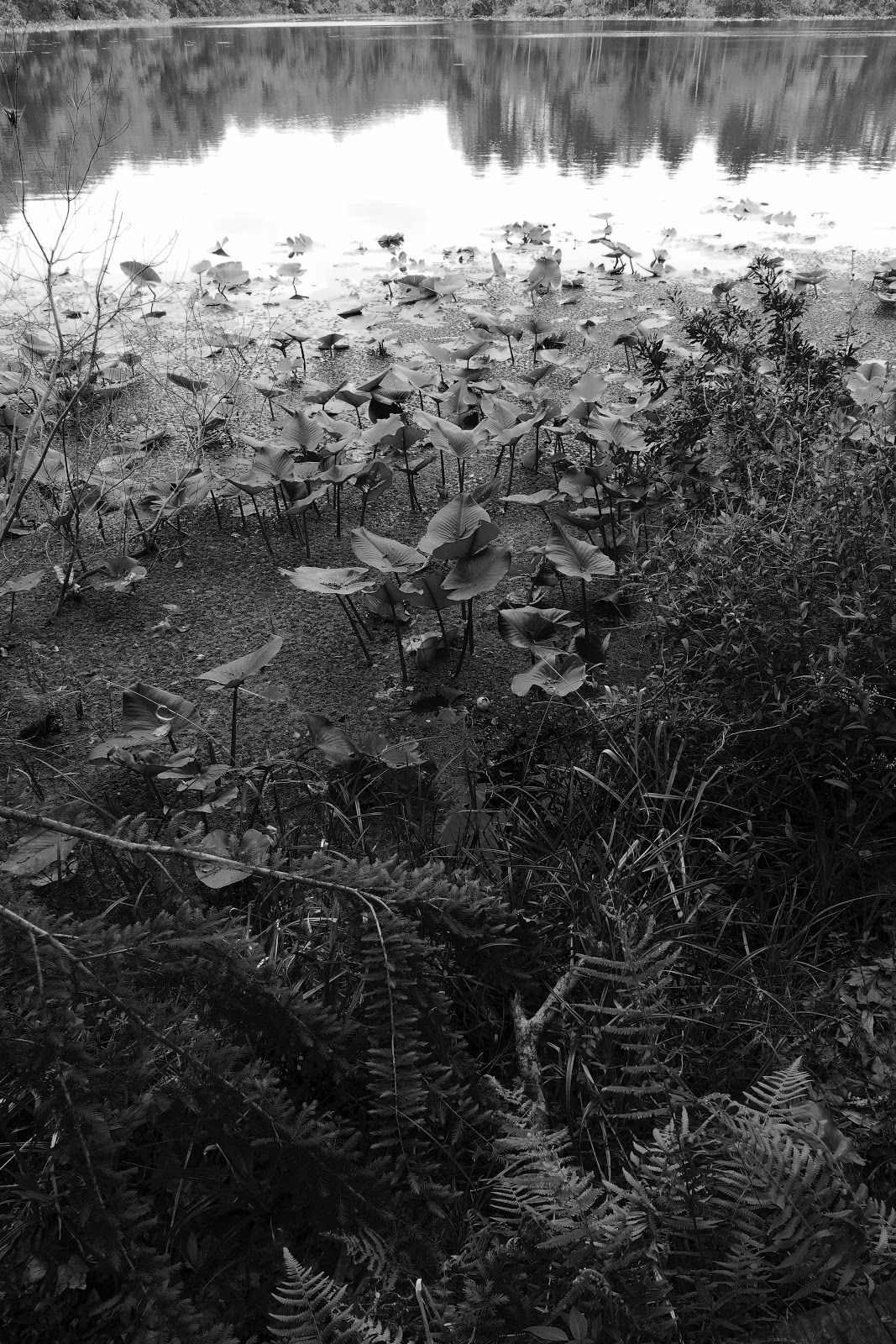 A helpful student at the main office advised me to check out Gopher Ridge which he said might afford me to spot some land tortoises, the creatures that burrow, not the ones that swim as. helpful sign pointed out. Helpful people apparently take them to the ponds in the woods there to drown them. 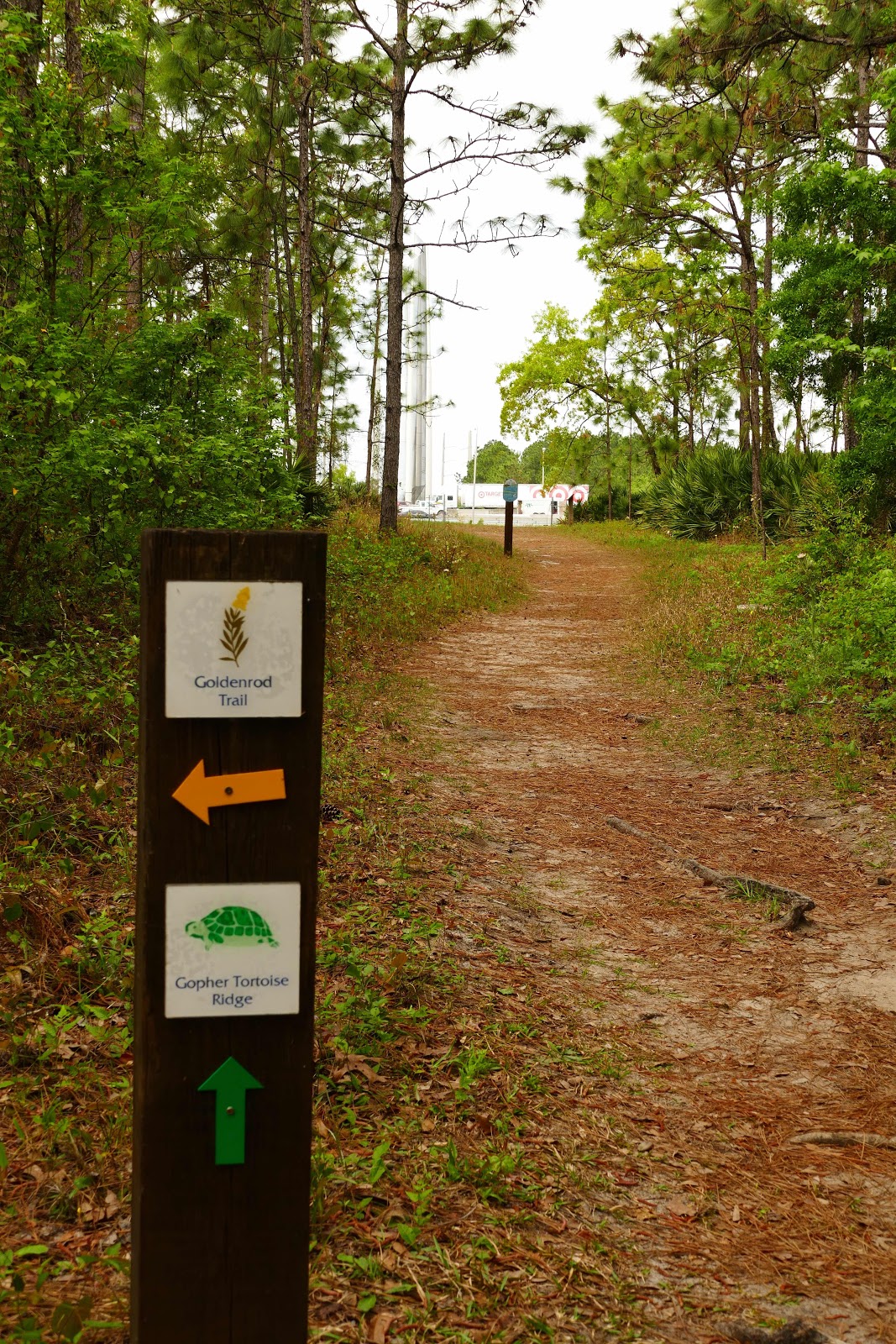 A ridge in Florida might be a feature that stands out if it rises twenty feet above surrounding land and this trail became unique in that it was sandy and soft underfoot, ideal for creatures that dig burrows. 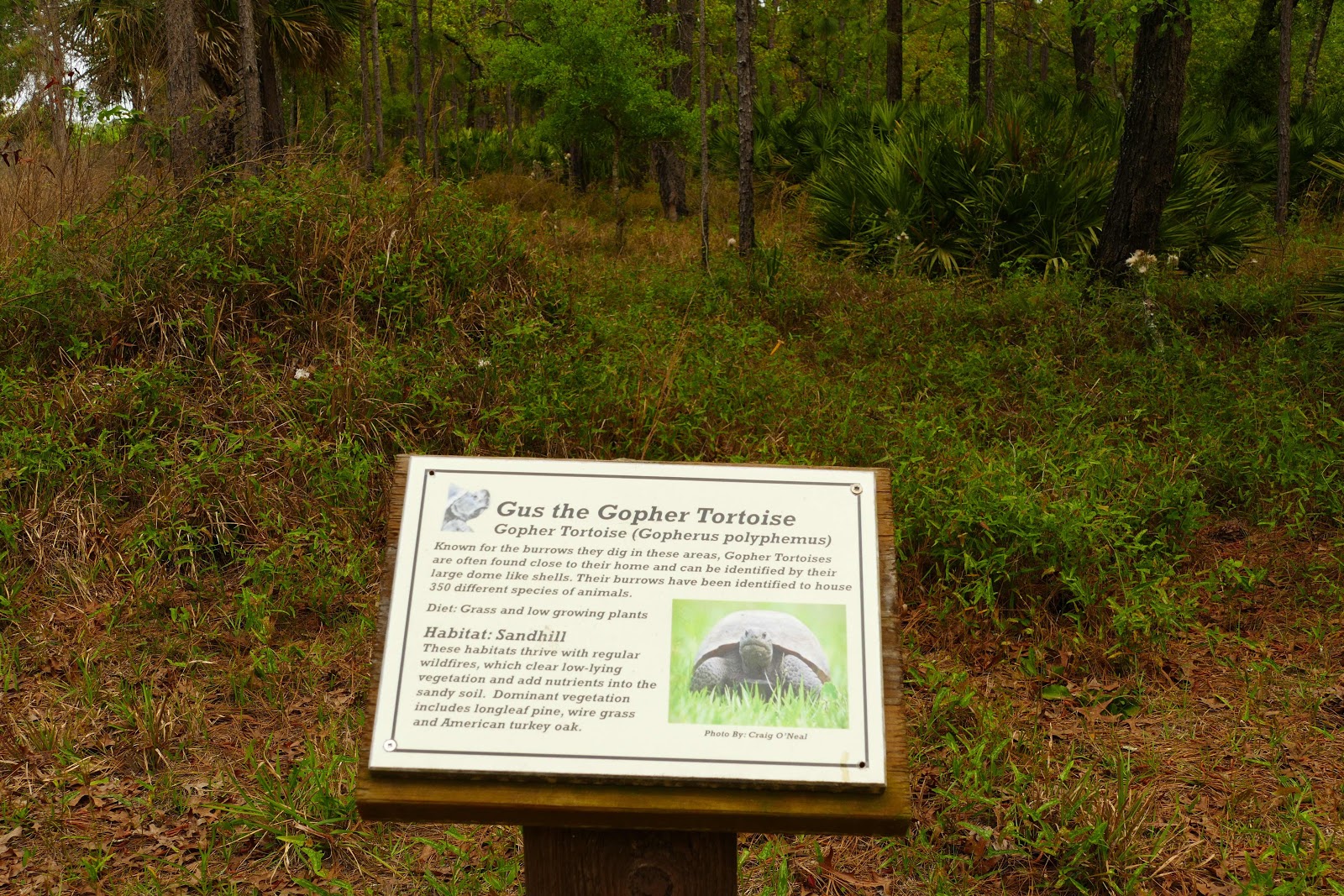 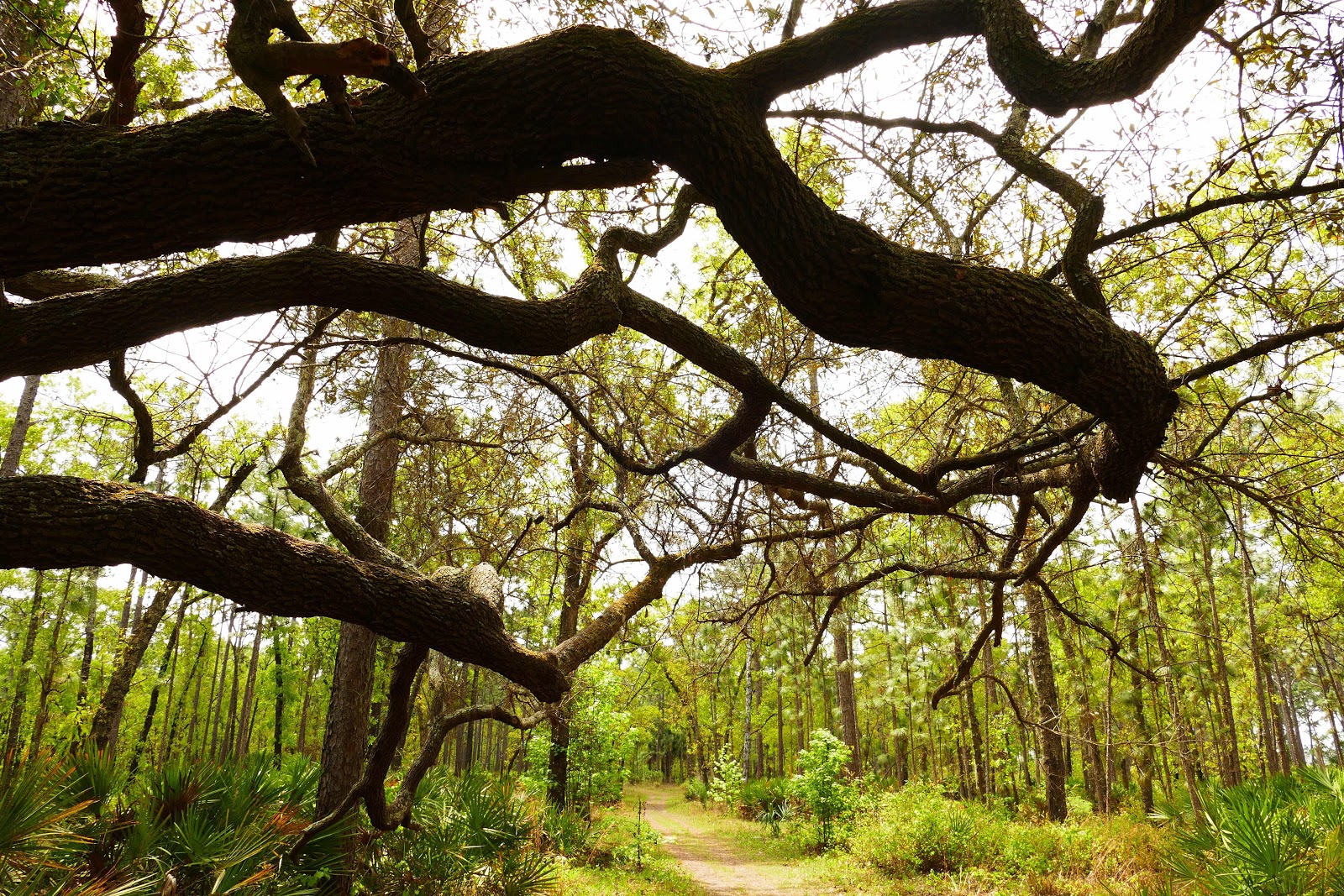 I did not see any tortoises hanging out alongside the trail though squirrels scuttled in the dry leaves reminding me for all the world of land crabs in the Keys undergrowth. 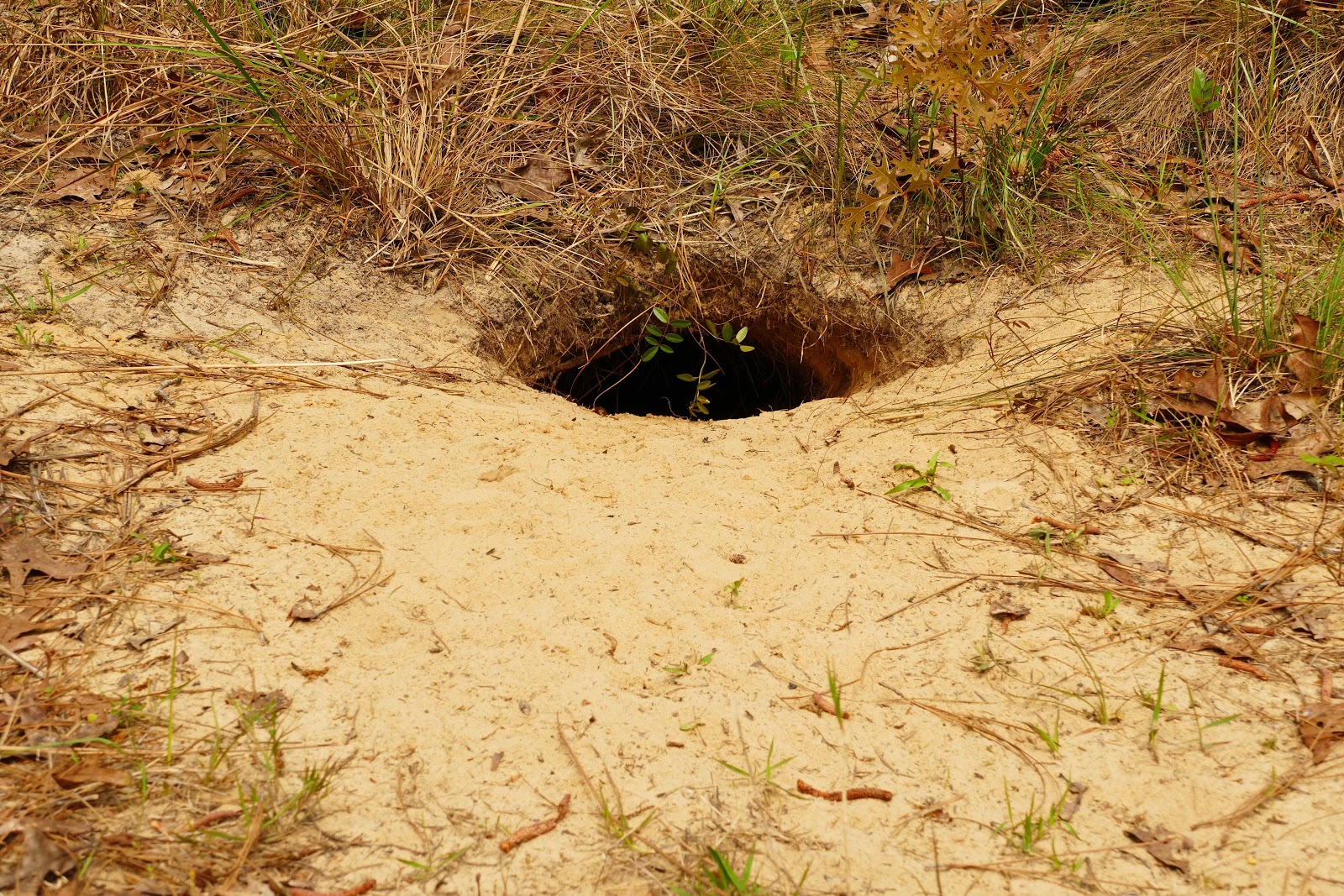 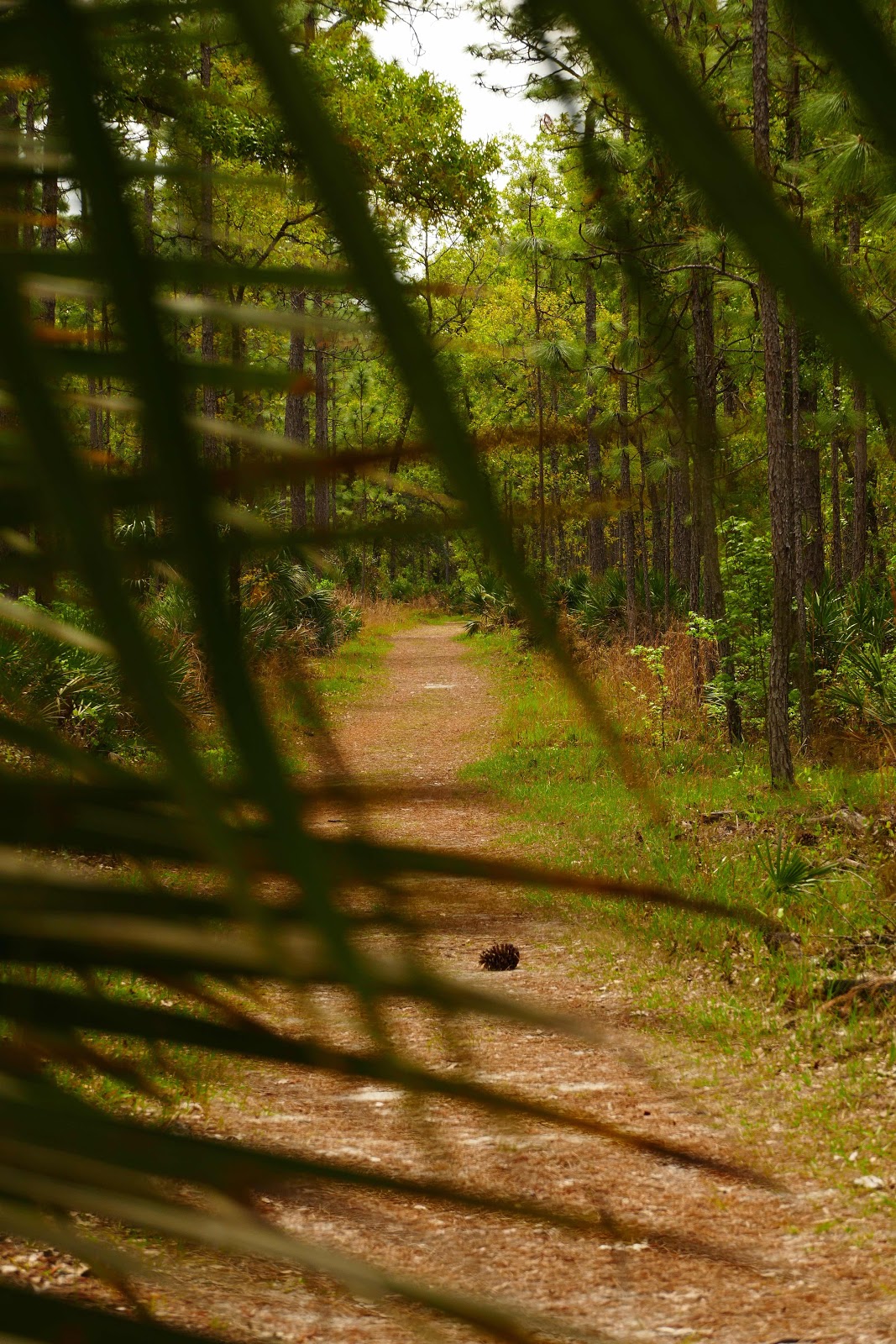 This grumpy looking tortoise gave me the stink eye from his porch where he (or she) was resting watching the world. I watched back for a couple of minutes then I went on my way not having actually observed any movement on the resident's part. 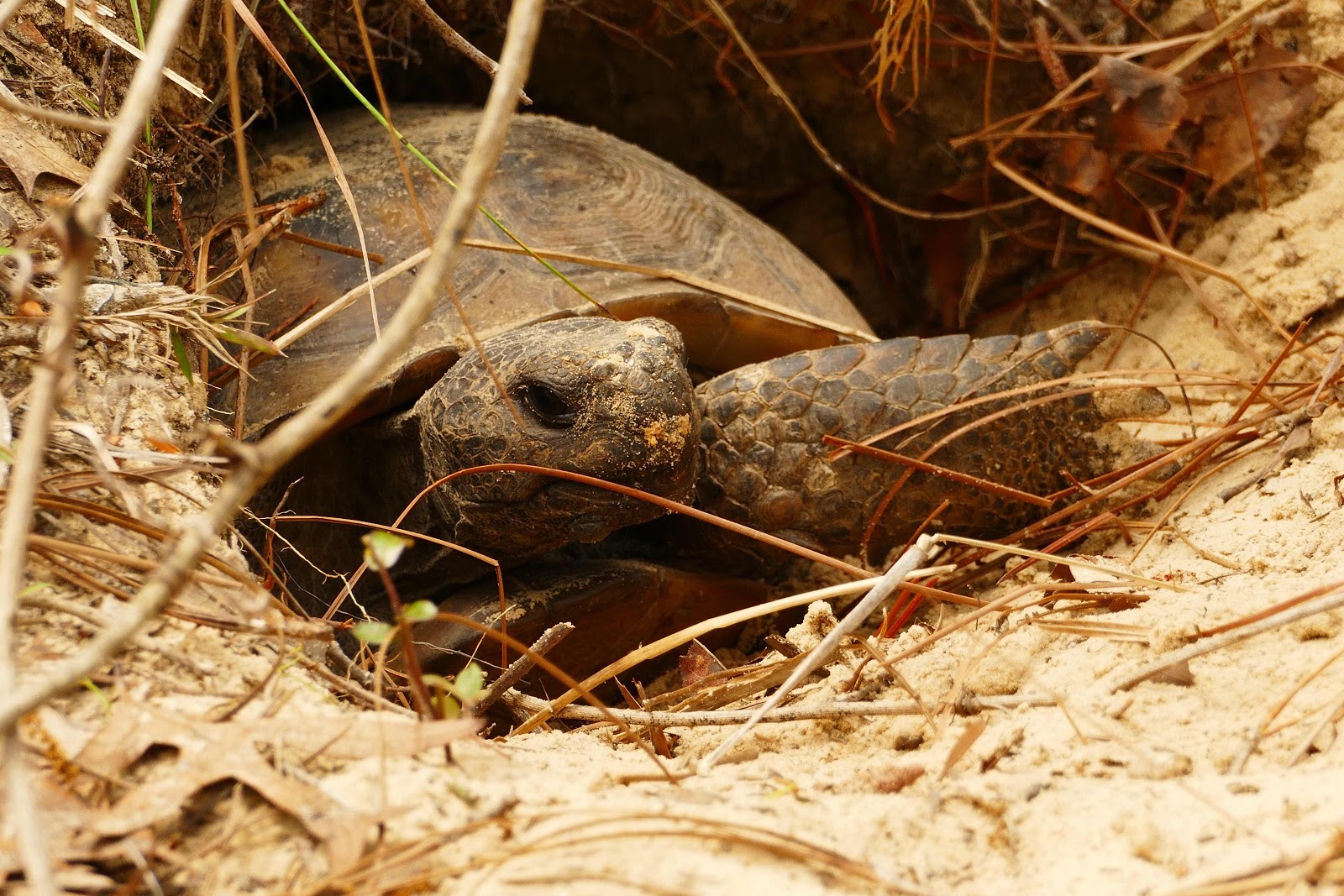 That was pretty much that for wildlife. I saw a few squirrels in trees who made a point of running up tree trunks on the opposite side to me so as I walked round to look they scuttled round the tree keeping the trunk between me and them. 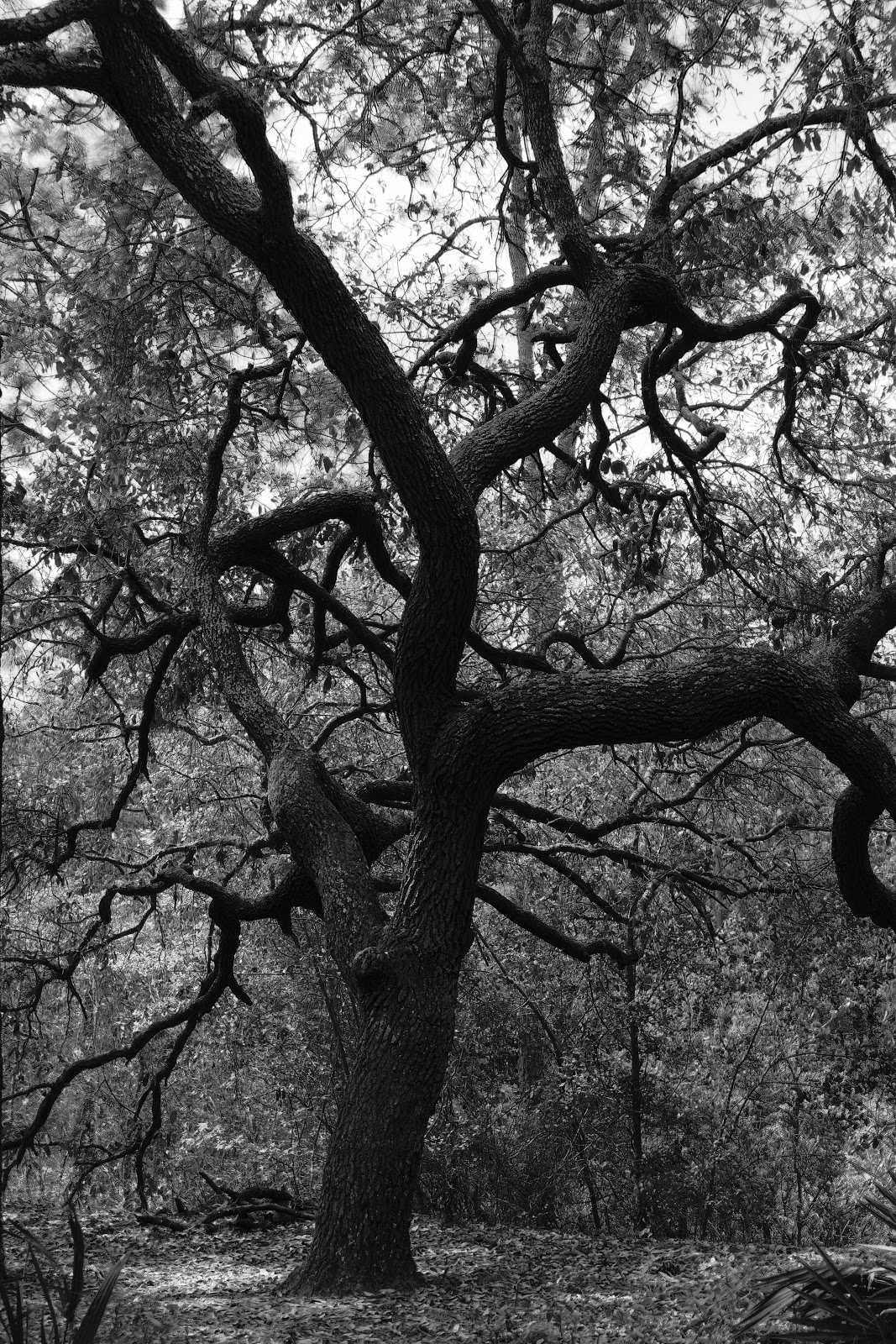 I abandoned the bedroom farce of trying to catch the squirrel in my exertions round the trees and contented myself with some rather wan flowers growing in the sand. Any excuse to sit and look around. 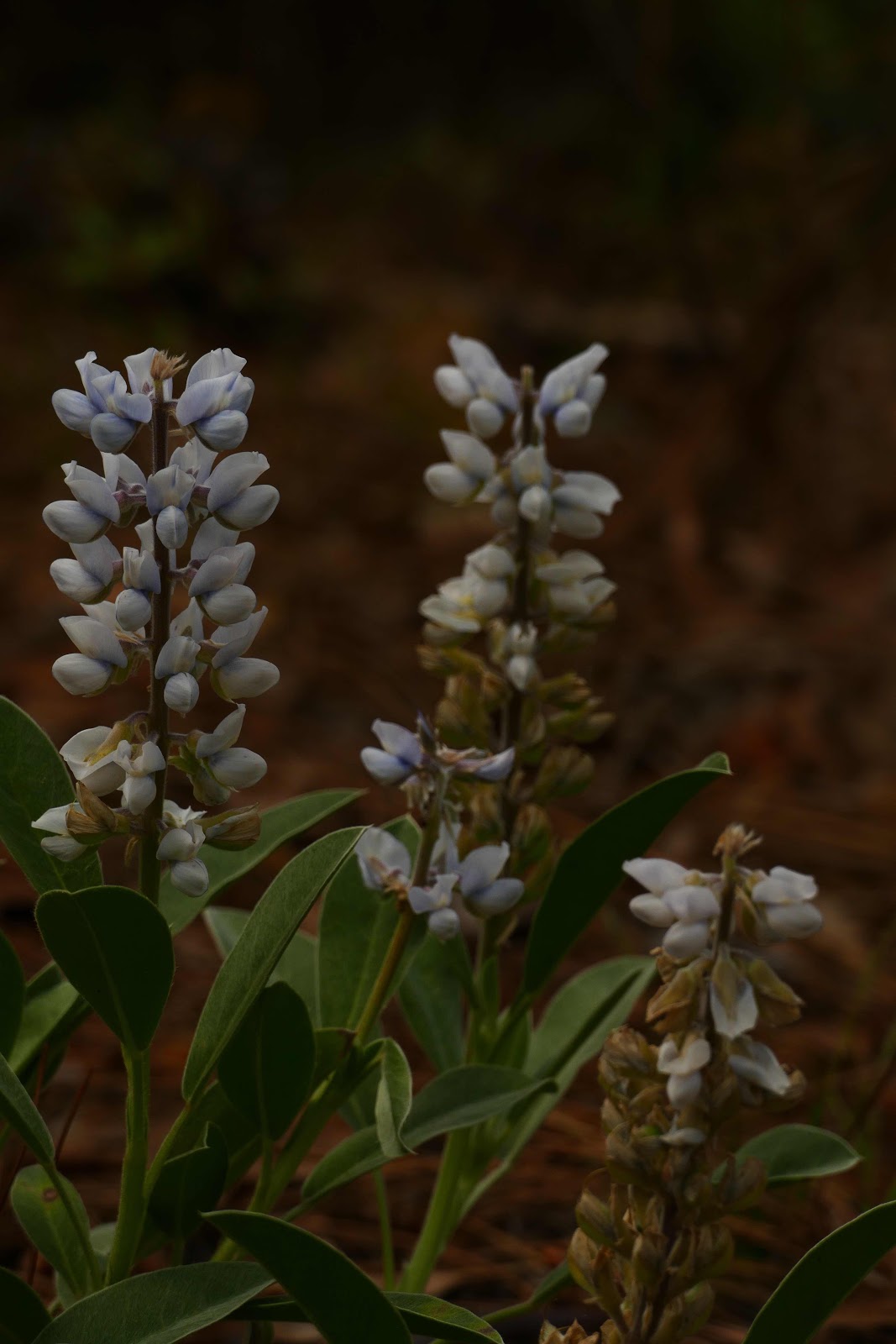 The trail meandered and I followed the Gopher Trail alongside a lake to the very end.  Other than these signs at junctions there was no other sign of life. 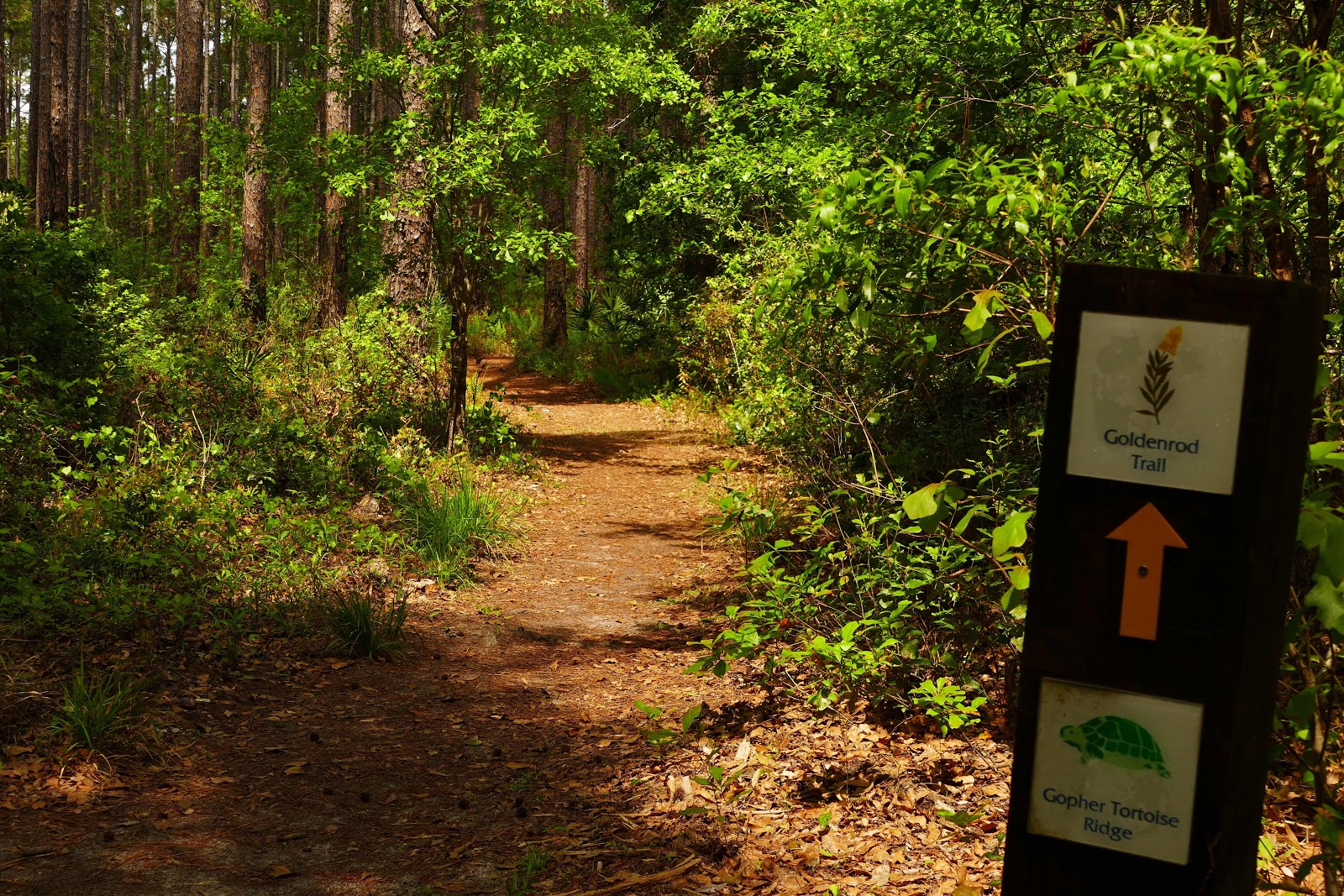 The stream meandered and became I supposed Sawmill Slough though I wondered how anyone might have used such a gentle thing to power a sawmill. It seemed unlikely. 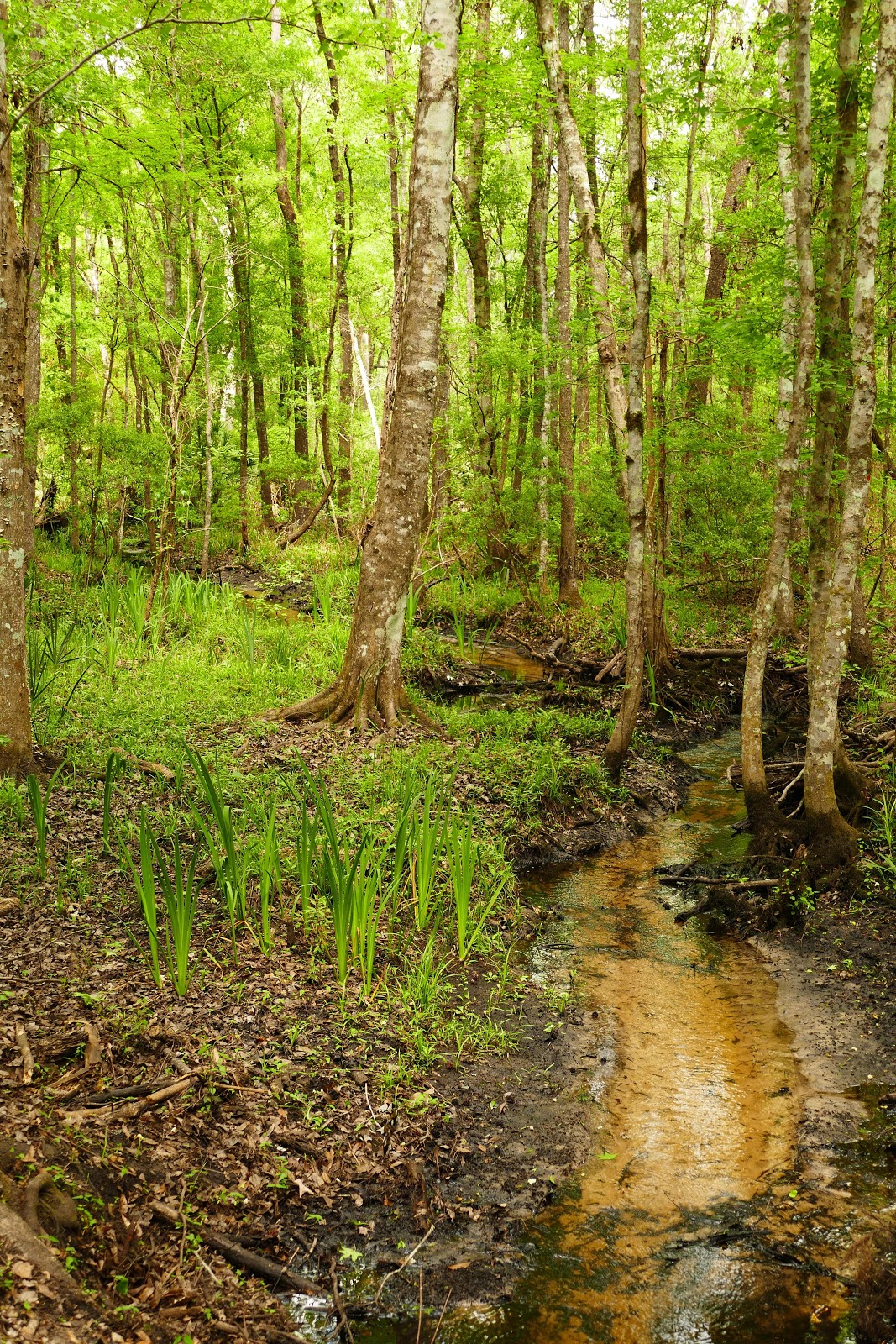 I'm not sure a thistle is a flower but I made it so and made the picture to please myself. 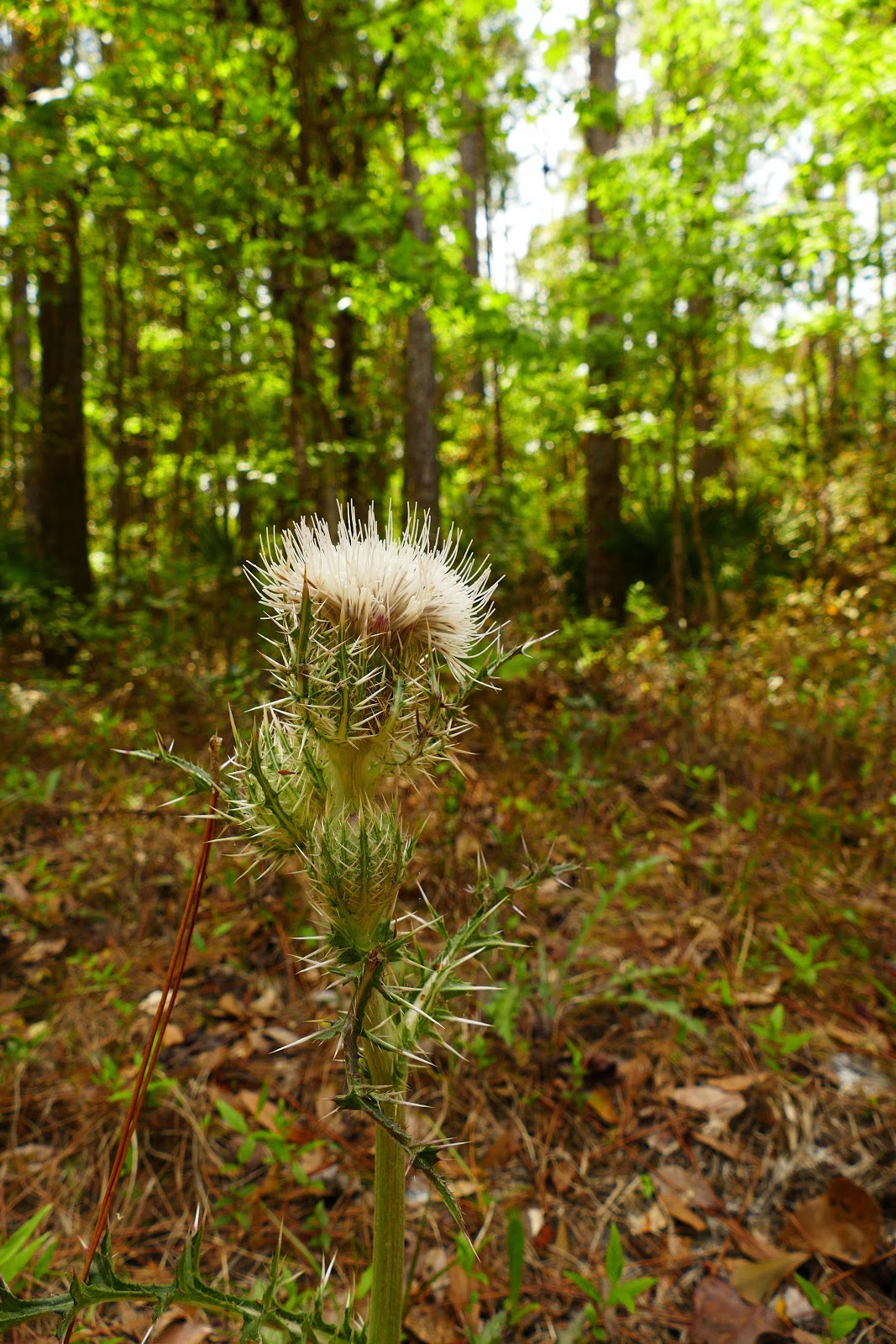 People! The trail, now called the Goldenrod Trail swung by a golf course of all things and there were humans suddenly in sight. I felt like I was a million miles from anywhere so to spot the tee and a neon green golfer just paces away came as a bit of a surprise. 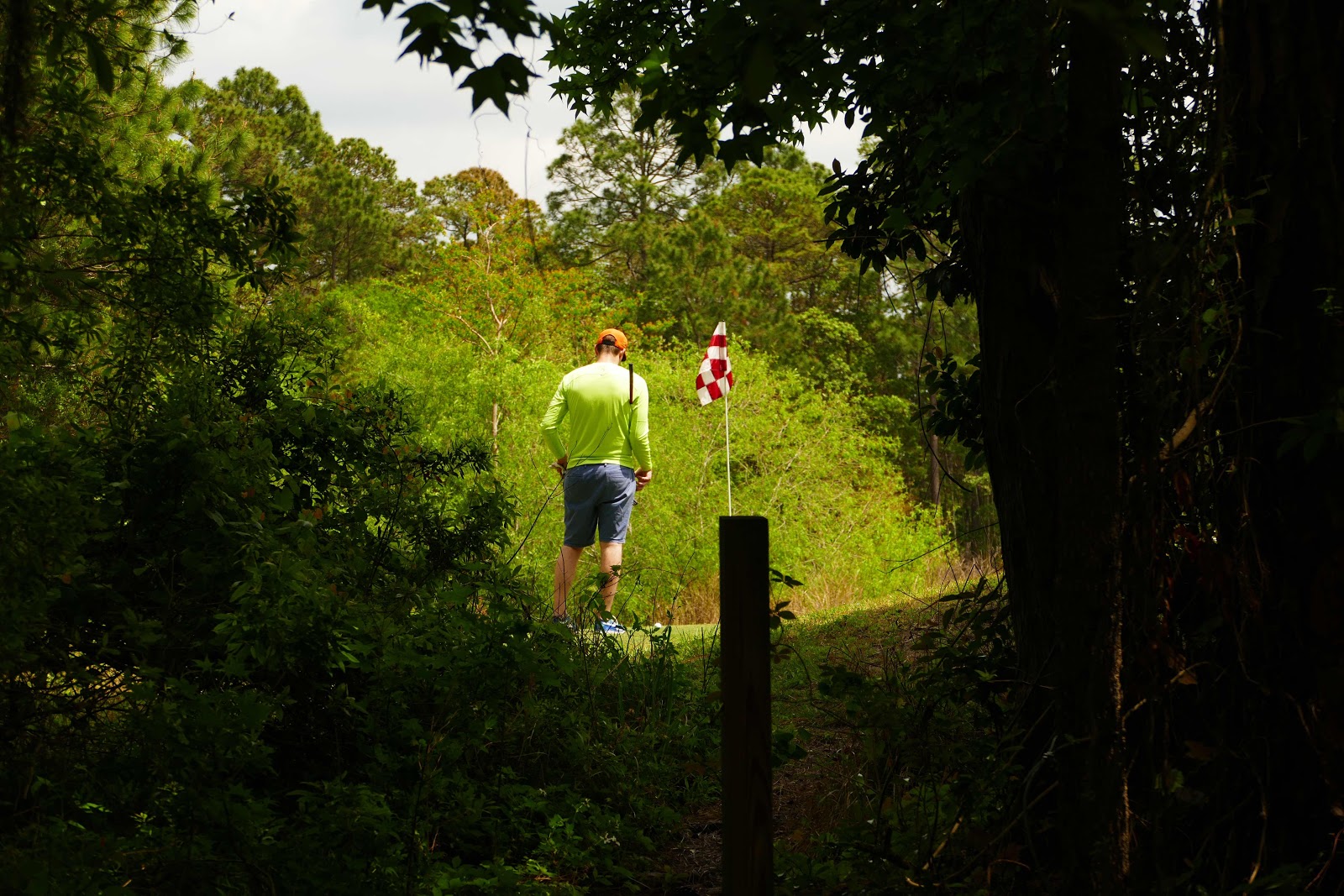 As I wasn't actually in the Gobi Desert I did have cell service and could find myself on an electronic map. I had strolled from the Parking Services Building around the top of the nearest lake then back towards the "295" sign on the freeway and turned south along the ridge to the lake with two islands, which trail then curved around the bottom of the woods and came up to where I was, the blue dot, at the golf course.  All was explained. 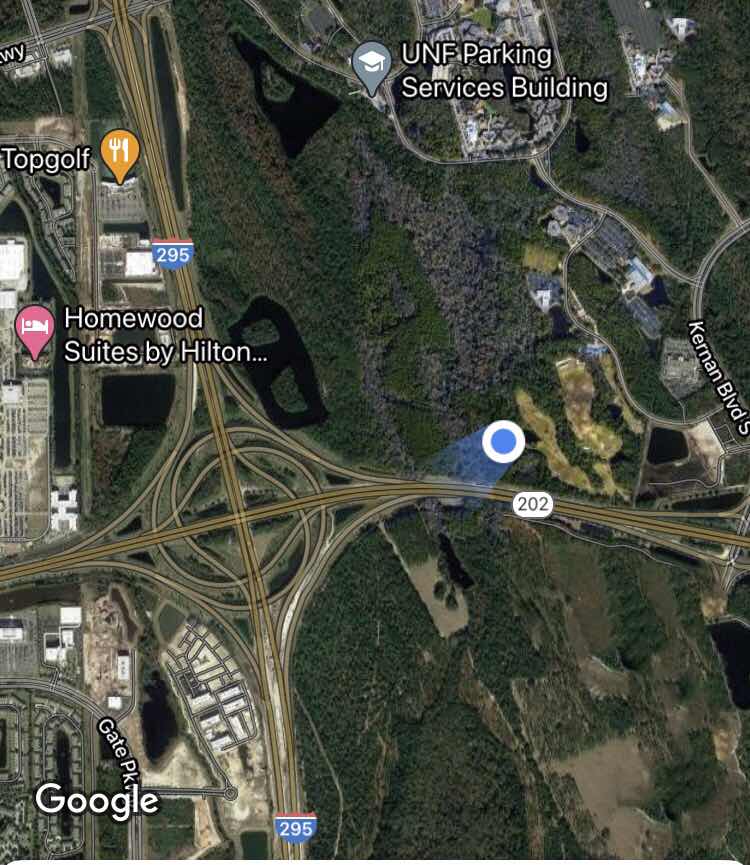 The trail looked less than maintained in the marshy area where I was now strolling. 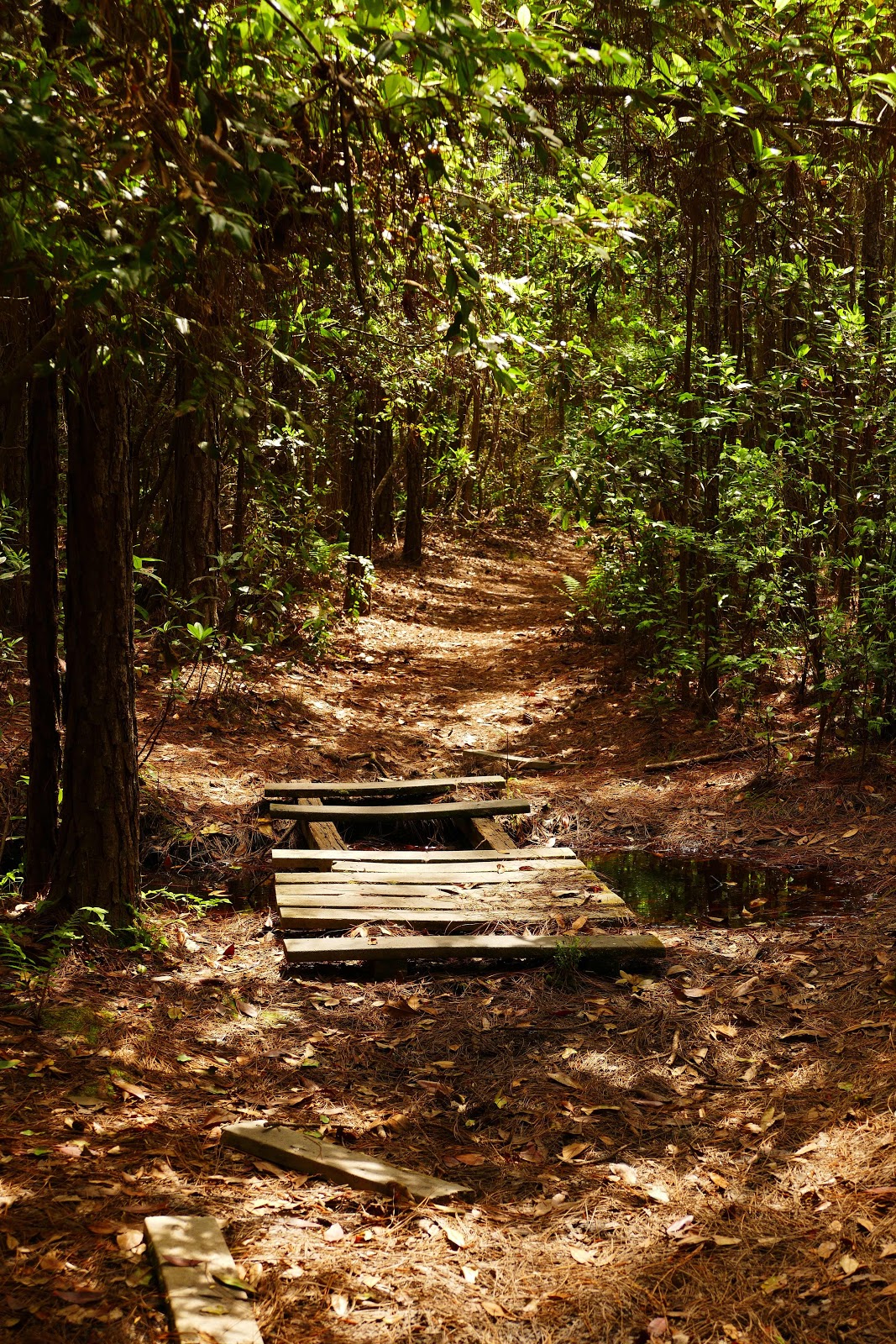 Disneyland this was not. 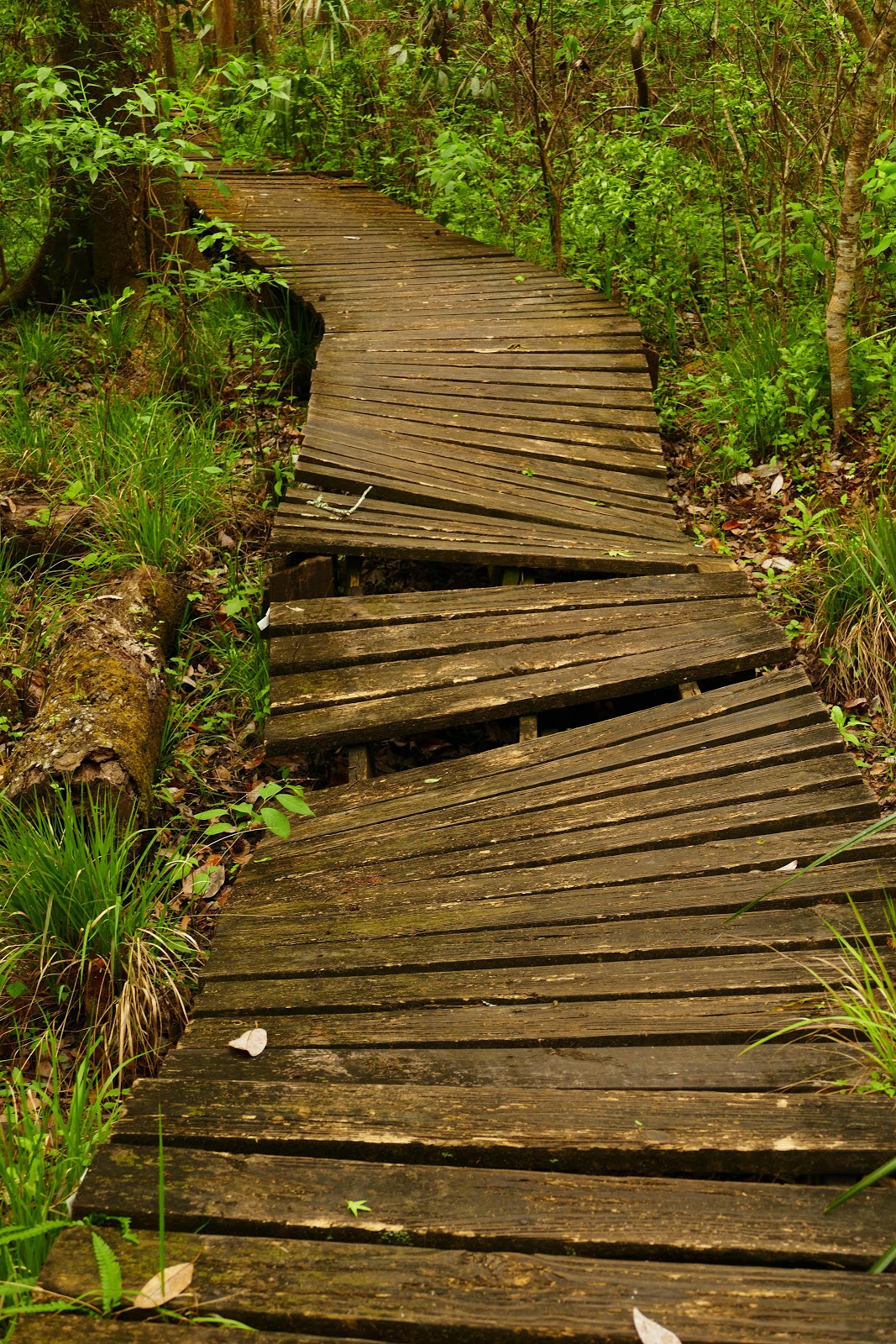 I came upon this disaster and had an idea what the sign facing away from me might say. I teetered along the trunks and planks to dry land without slipping... 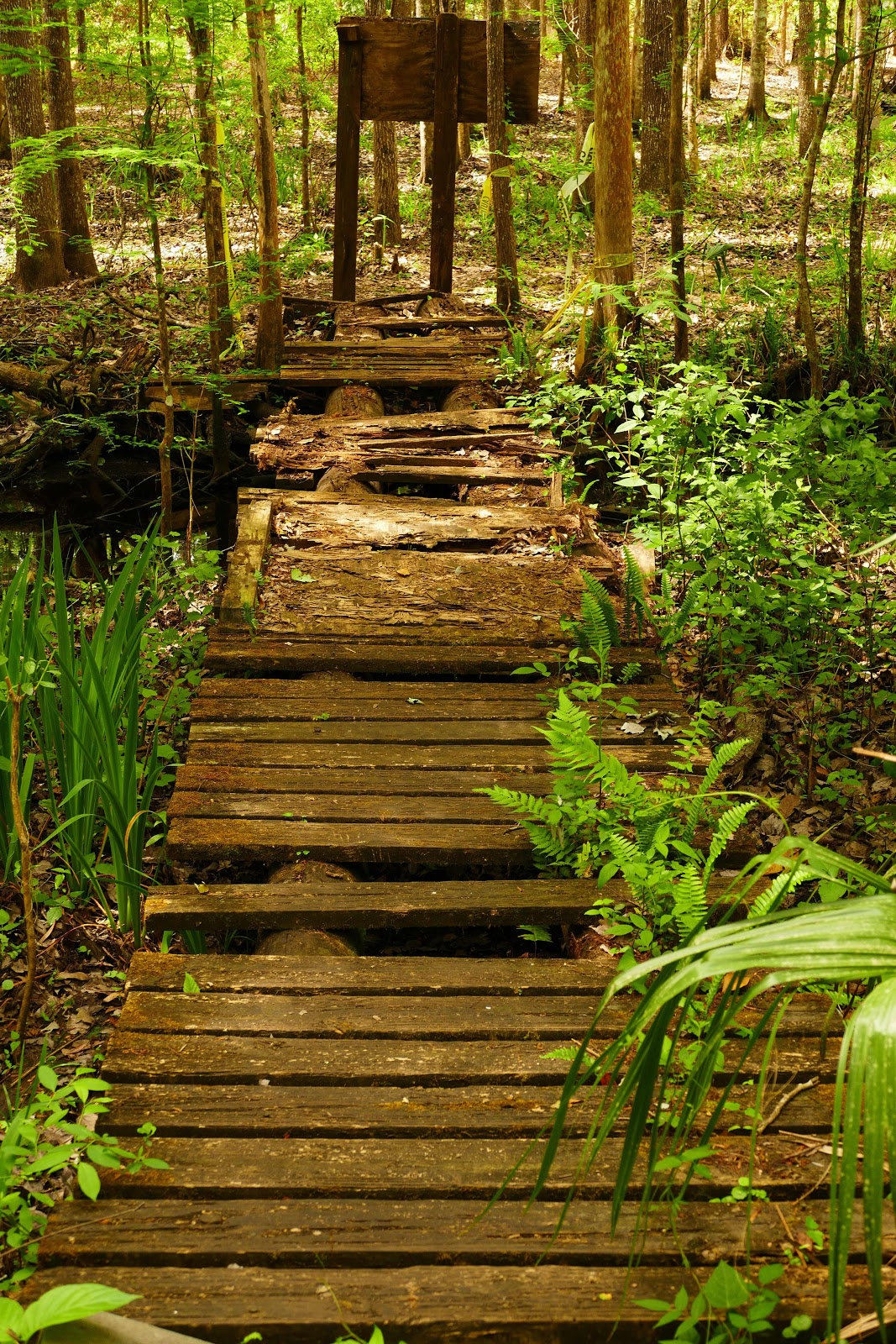 No surprise there, then. I was actually rather glad they hadn't closed the trail from the direction I walked as I would have missed out the curve by the golf course. 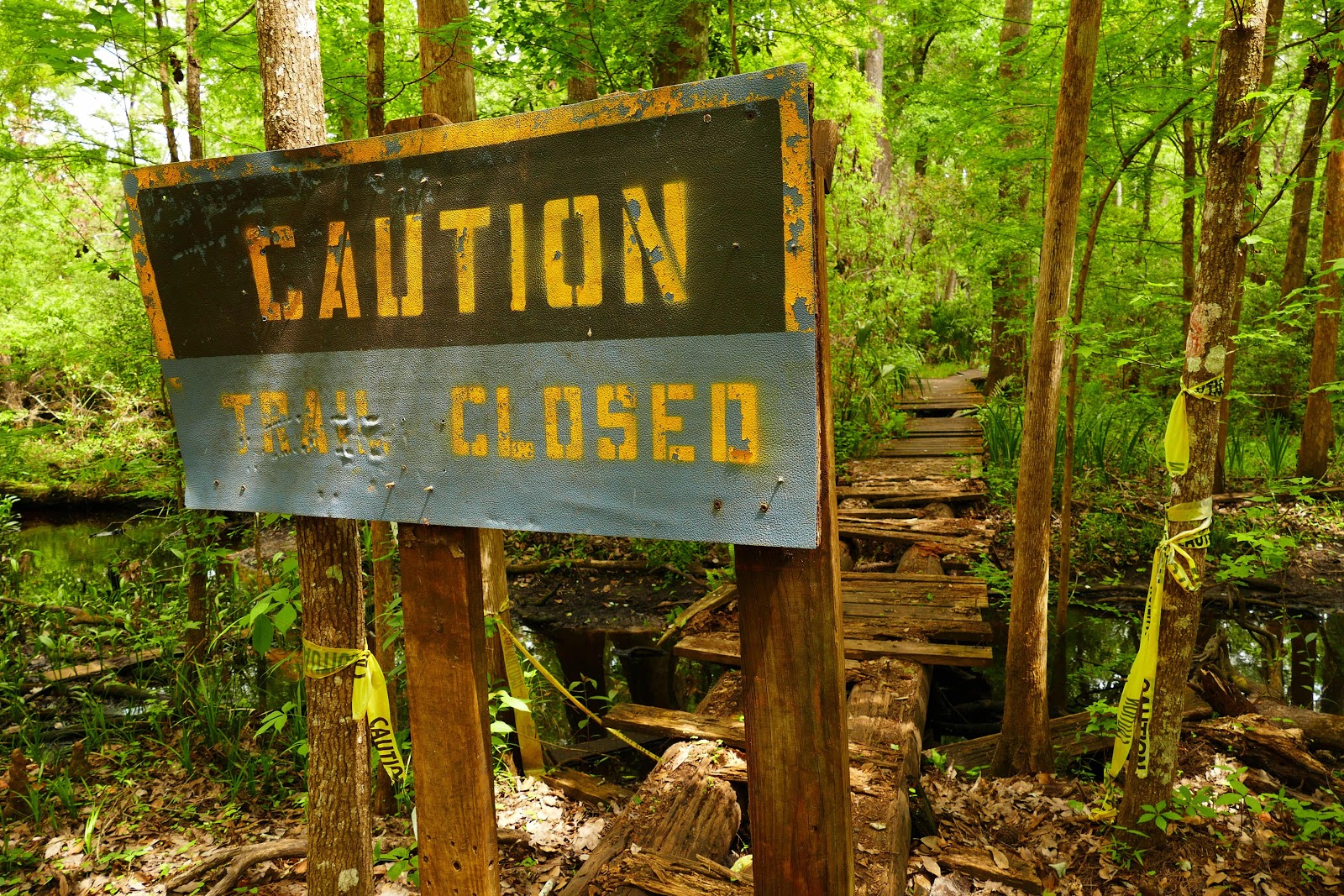 I was on the other side of the wooden walkway when I walked along the distant loop  off to the golf course. I had no idea the looped trails came so close at this point. 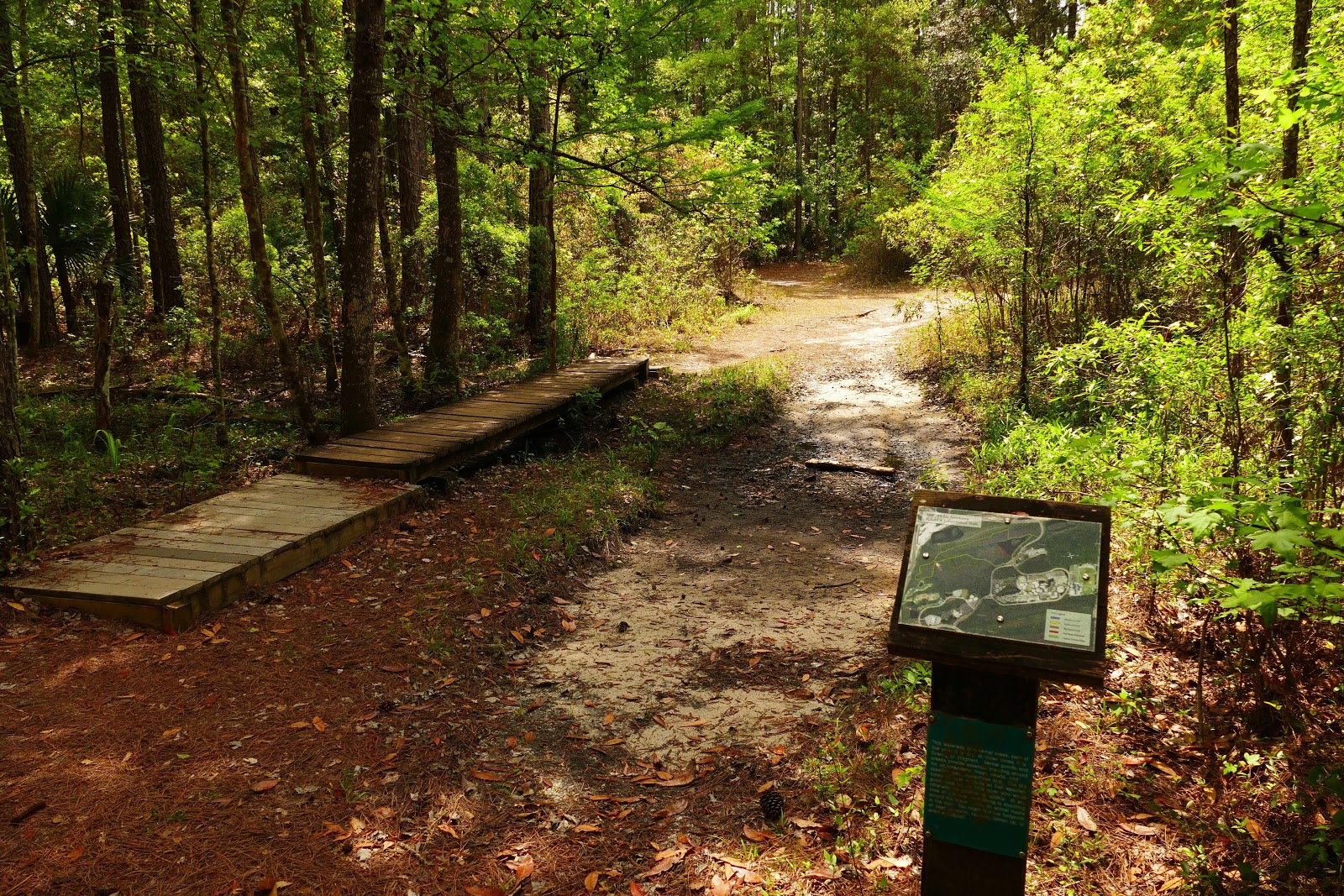 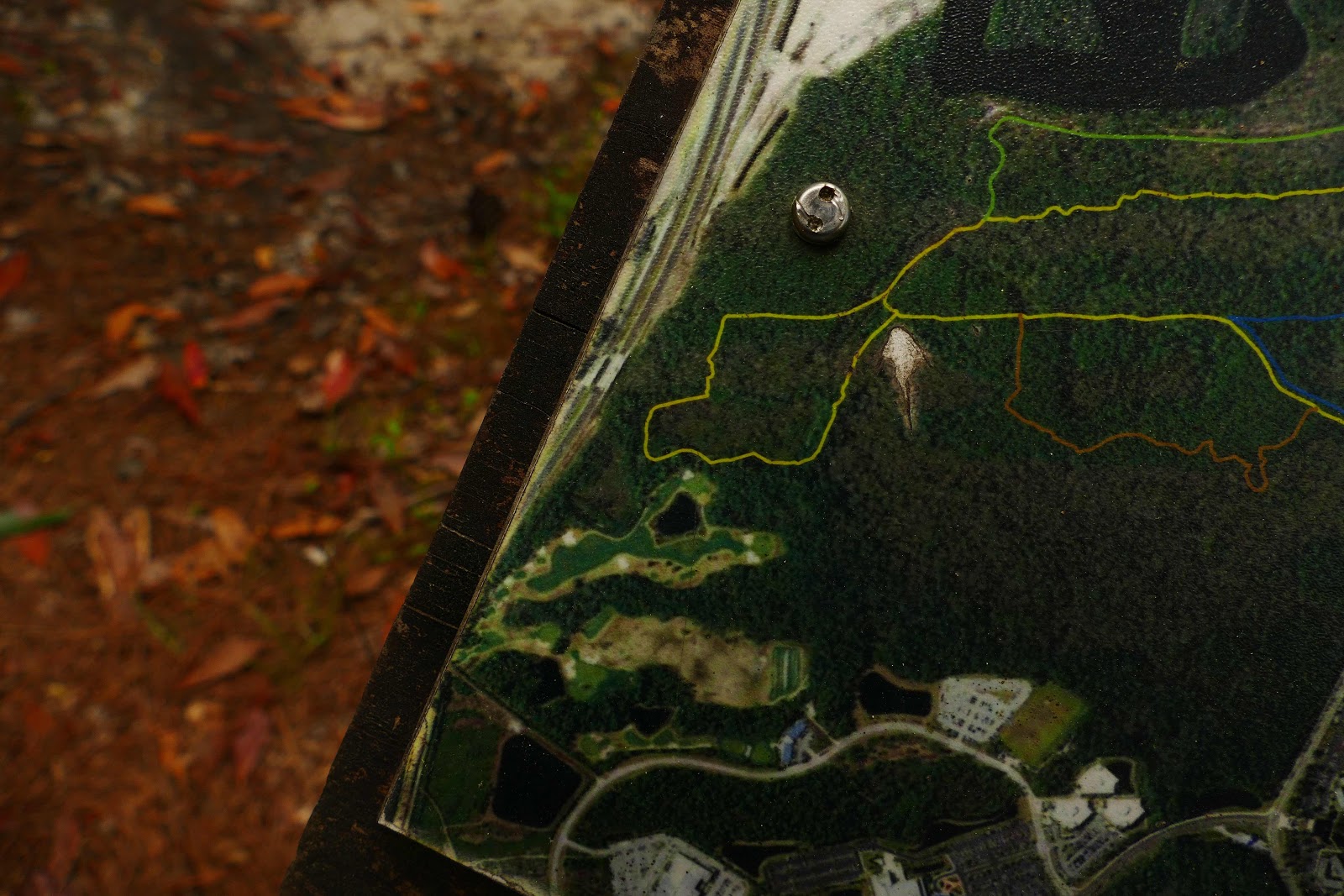 I was not alone after all. 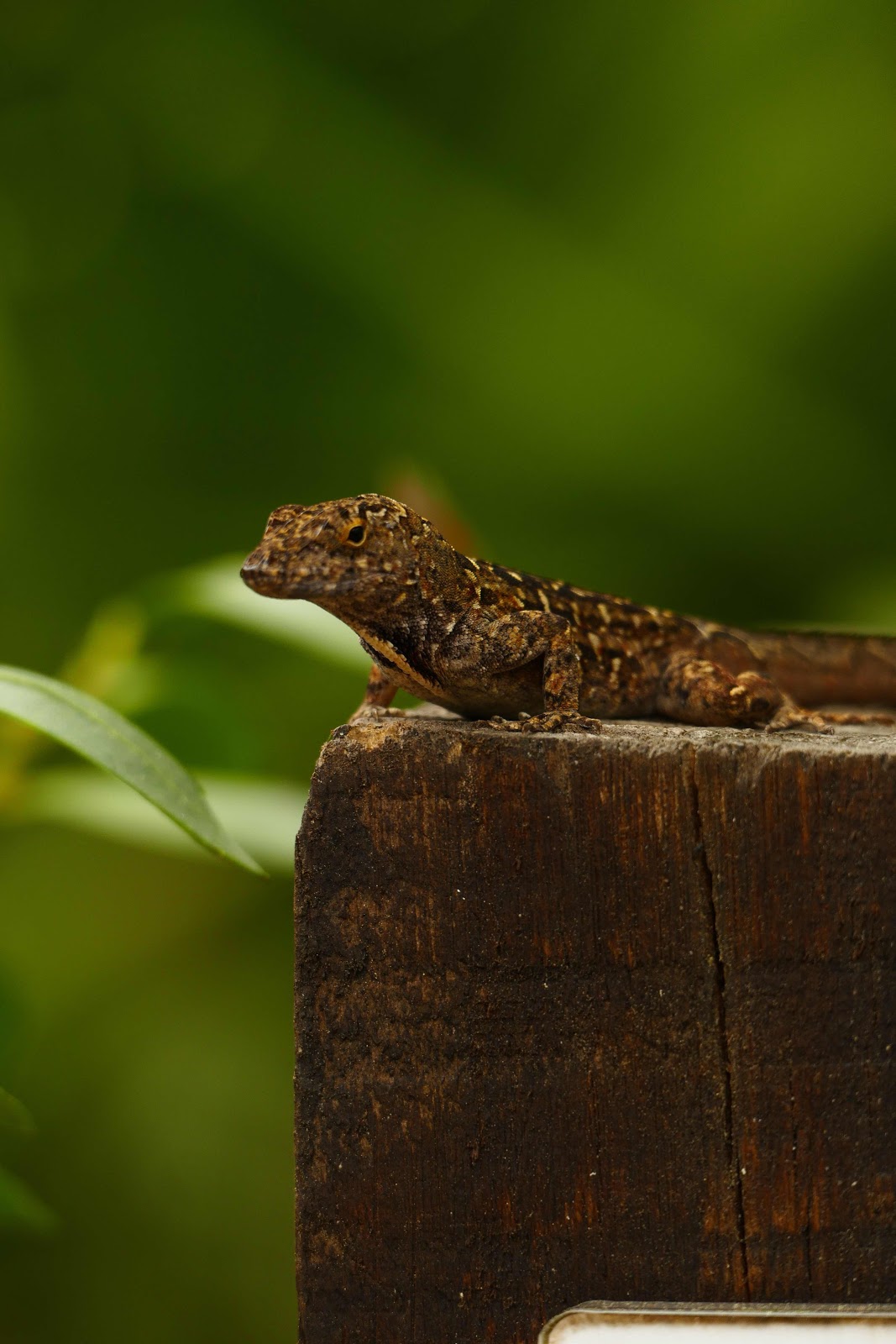 Back on the main loop, this time a brown trail labelled Big Cypress, I was glad to see the chain saws had yet to be deployed. It gave the manicured trail a slight wilderness feel to have such an obstacle. 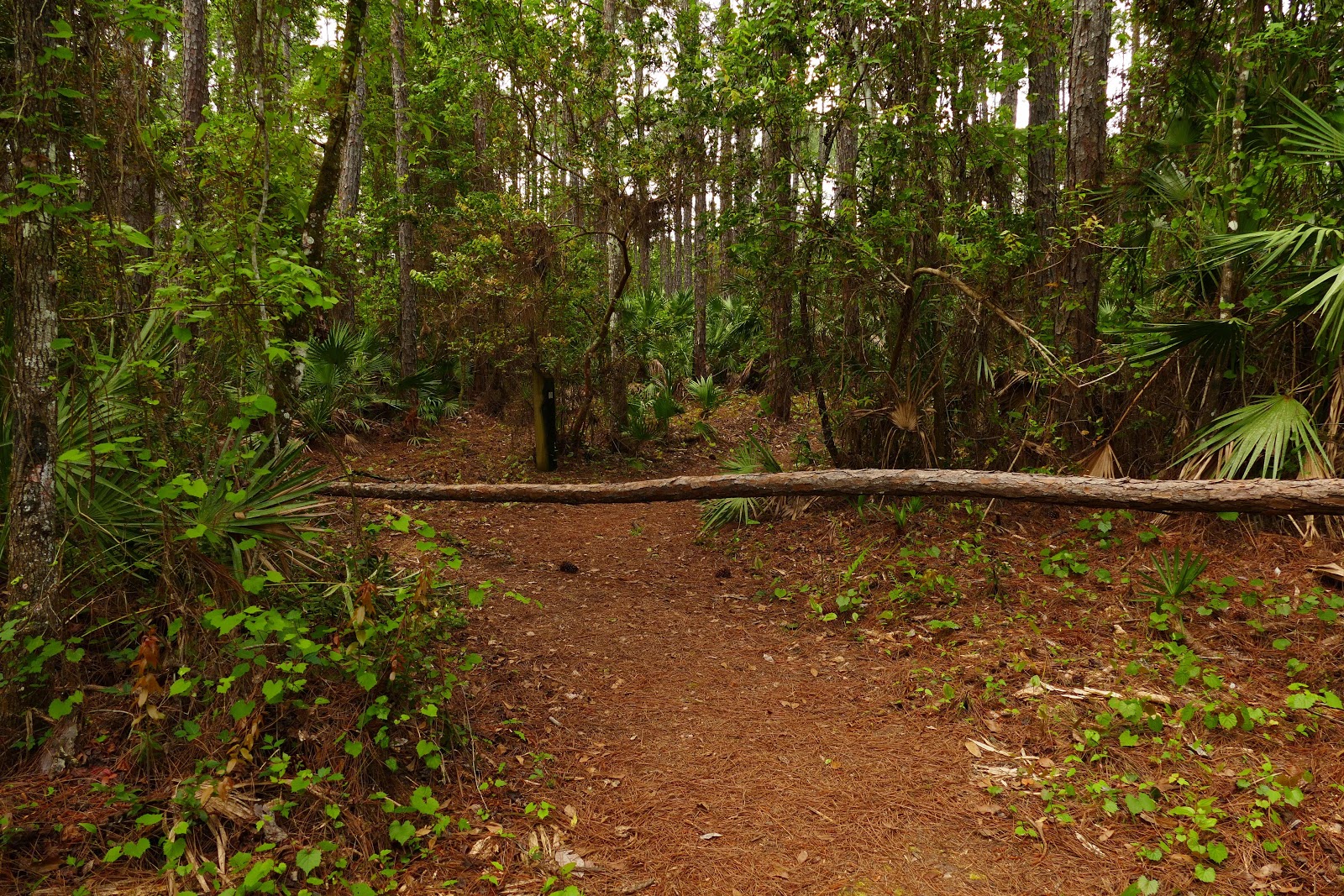 No dogs. But they do allow young people and students. Hmm. 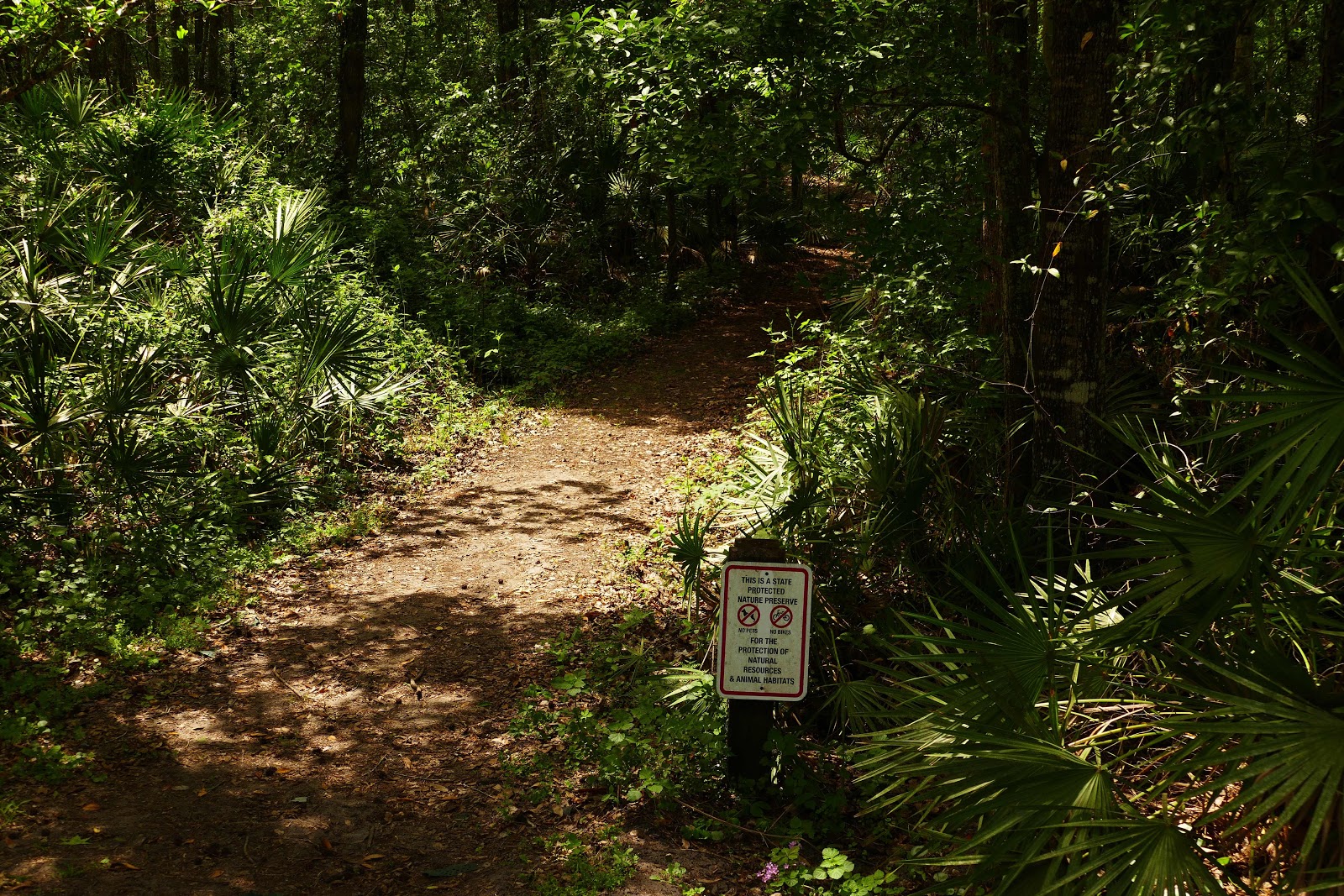 A few black and white pictures to end the walk. 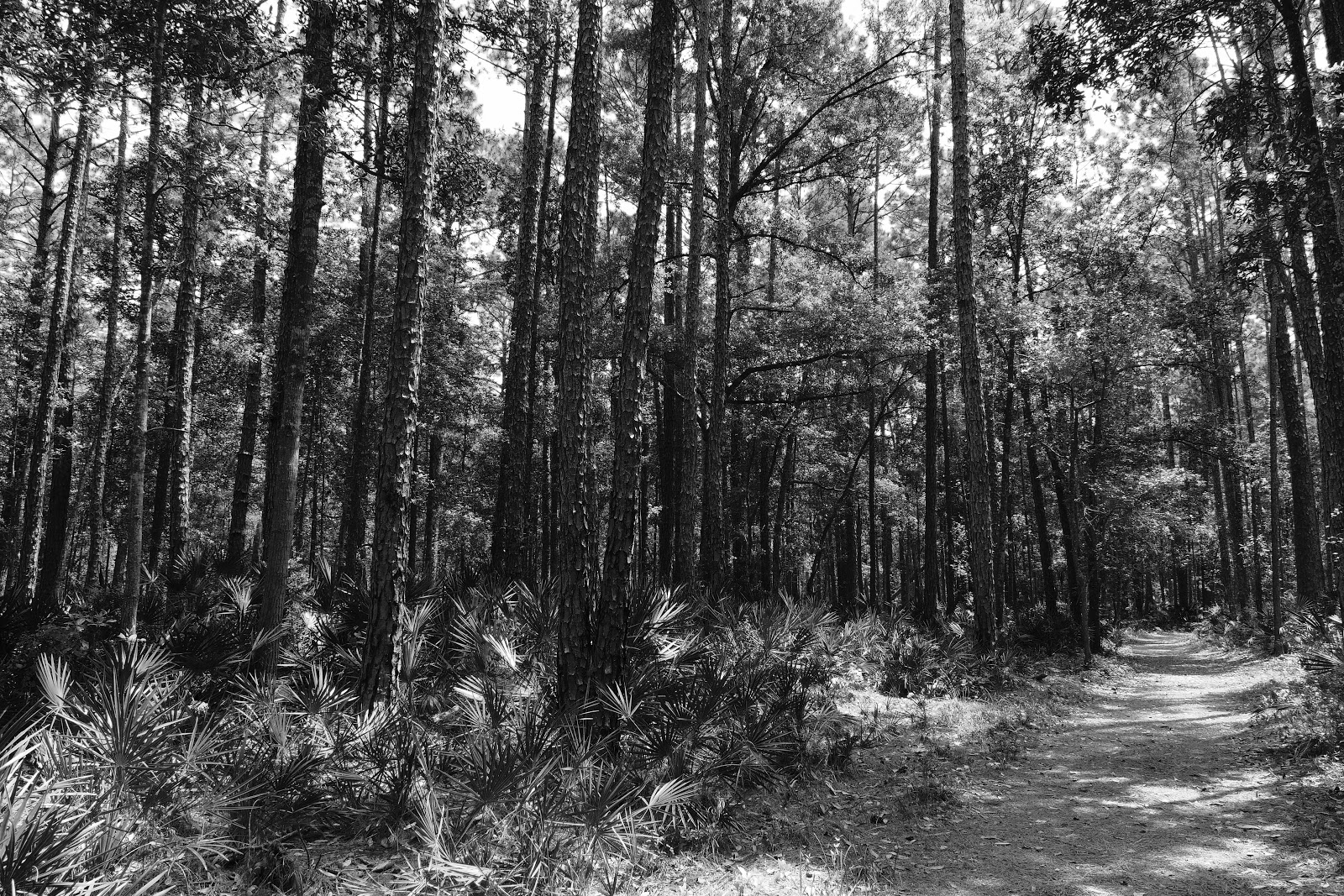 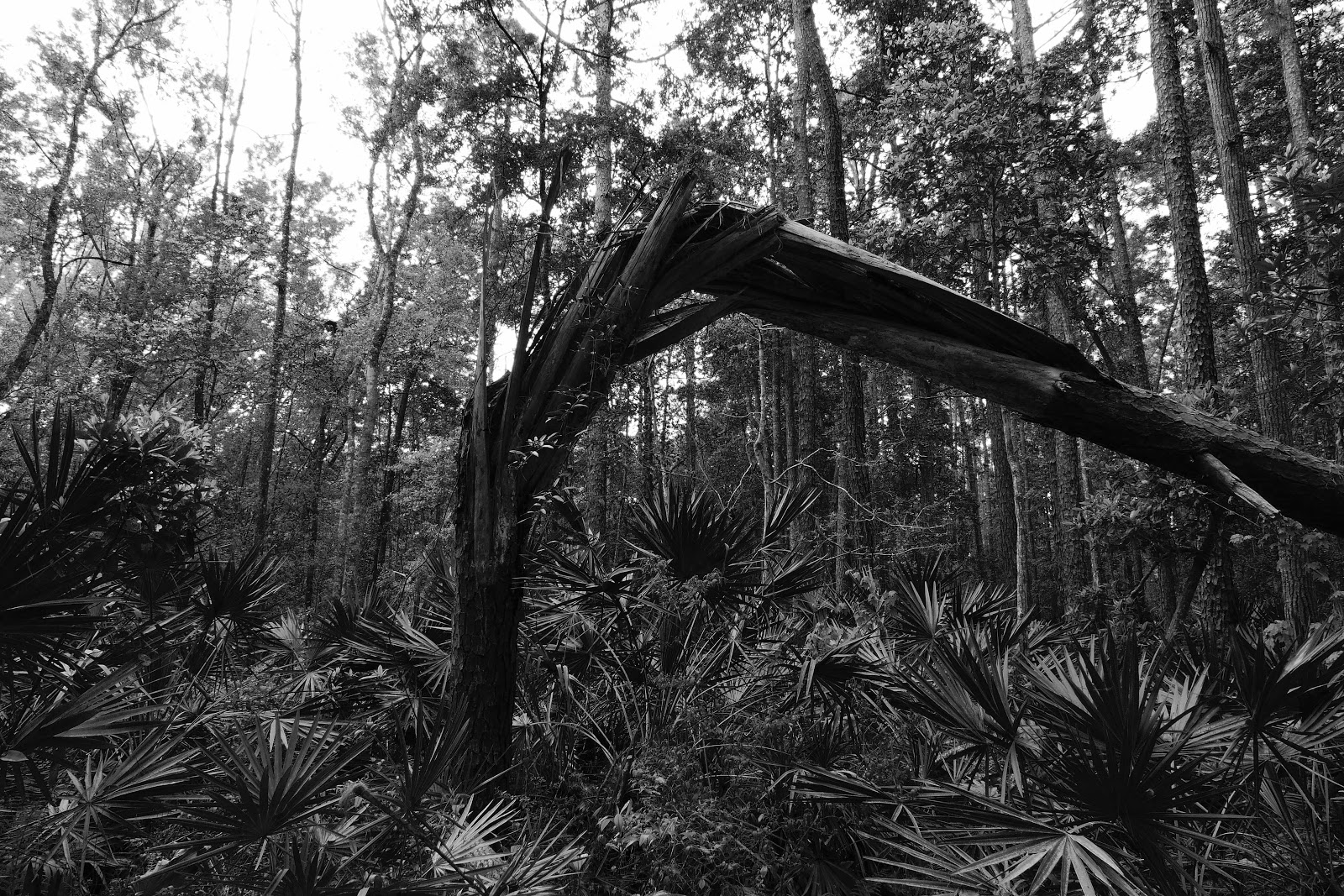 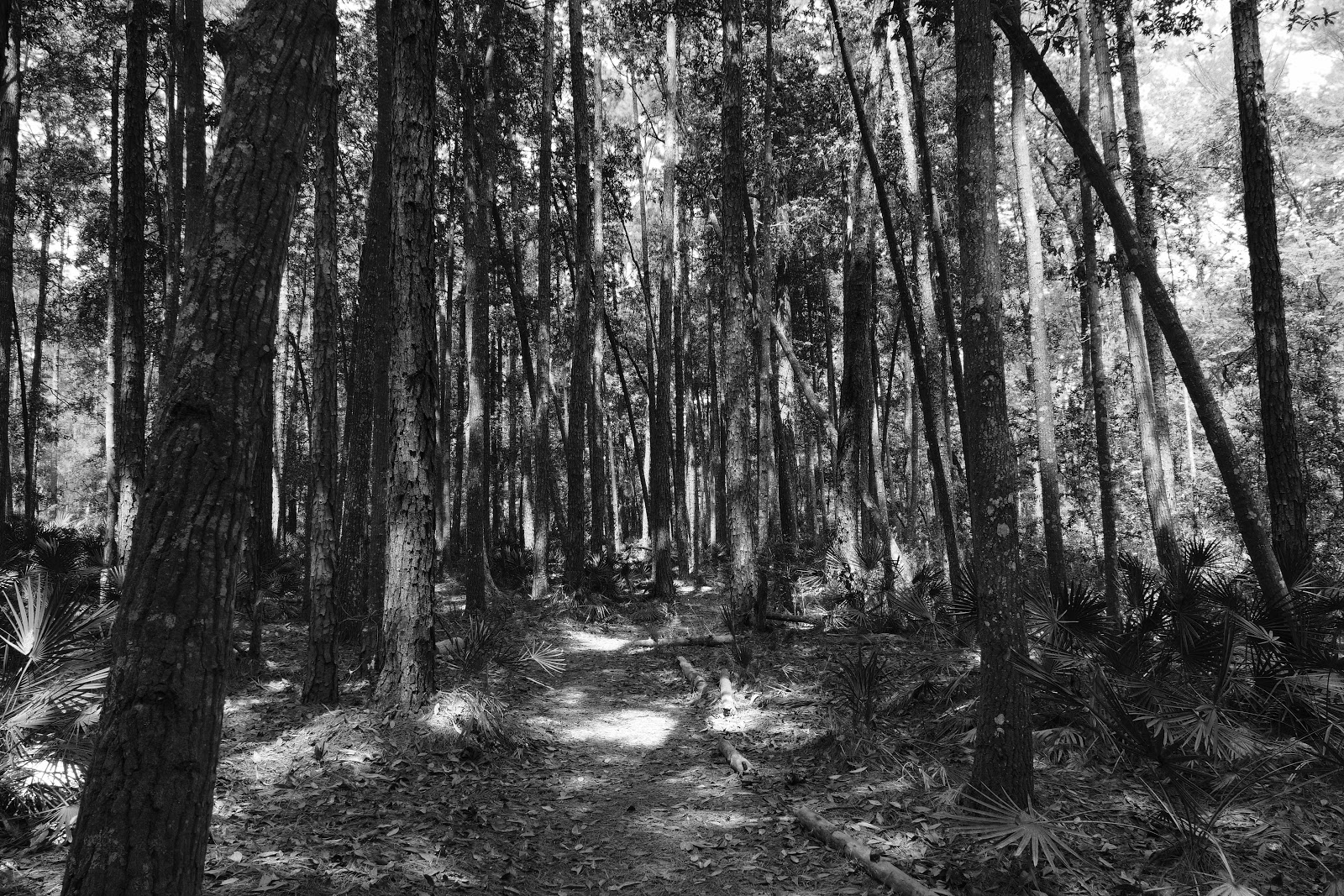 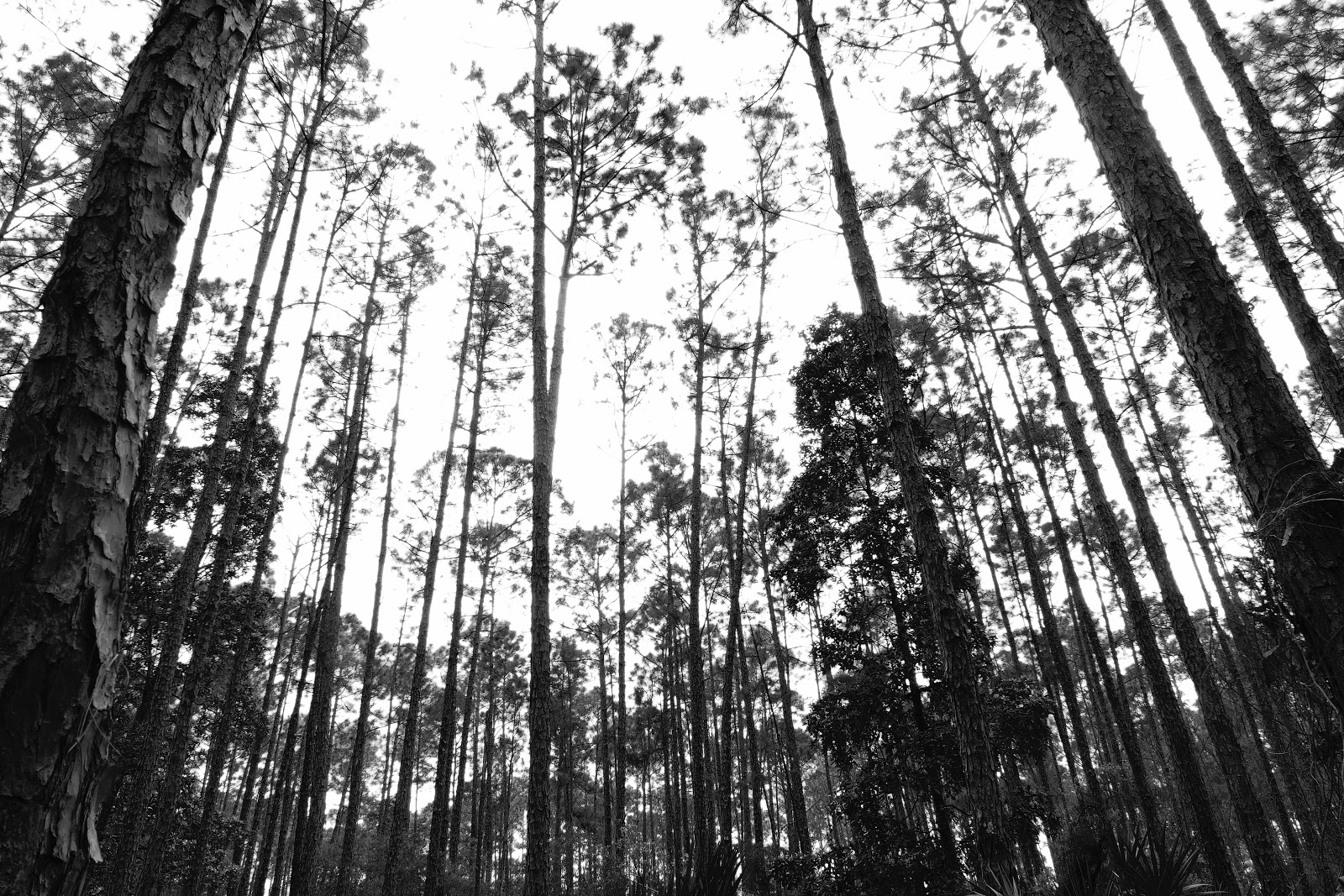 Then the word came the van was ready and I stepped out to civilization and hailed a cab.
Posted by Conchscooter at 12:00 AM 7 comments: