I have this unfortunate tendency to make connections and find things funny that most people don't. I have actually been berated for my public  sense of humor by those unhappy beings who don't share my sense of fun which sometimes comes across as too strong for those of a weak humorous disposition. I have never been moved to make artworks out of my puns but I take my hat off to a man whose work is currently exhibited at the Custom House on Front Street but ends on Sunday the 10th so I only just caught it. Lucky me. 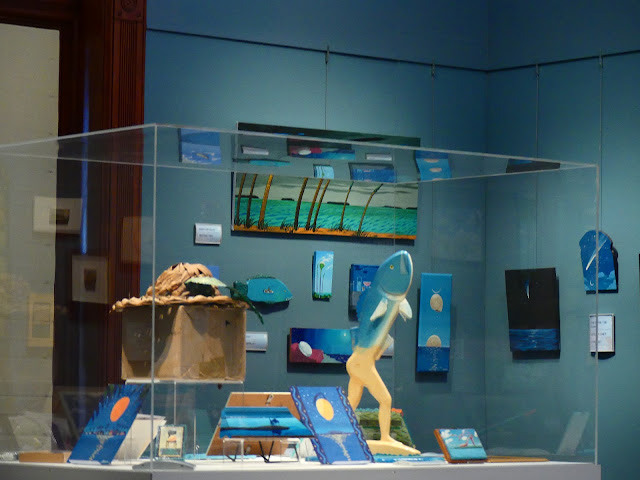 They call it Whimsy which when you look at the art is a good description. I knew I was going to enjoy the show and I did, very much. 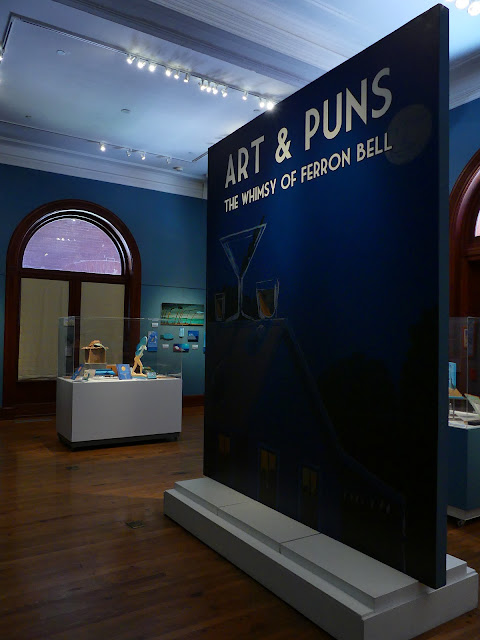 I had difficulty deciding what to photograph there were so many objects on display. 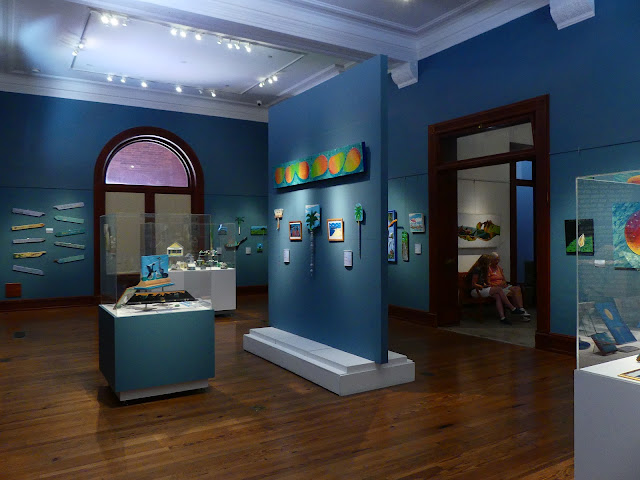 The large picture below is titled "Hurricane Palms" but all I could hope to do is give you a small taste of the brilliance on display. 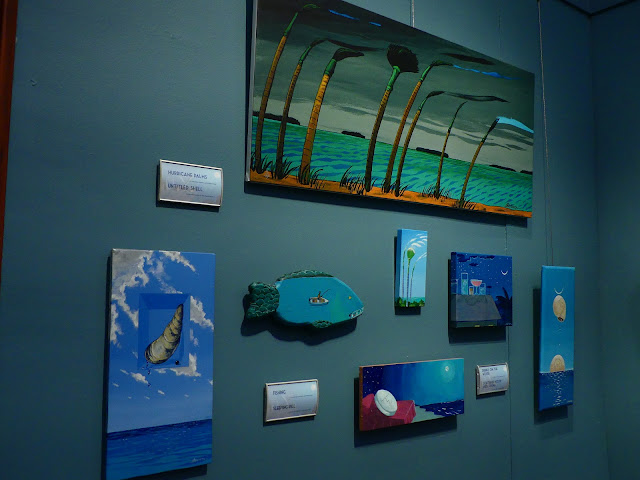 Much is made of the fact that Bell did not make large sums of money from his art. He kept his prices accessible and apparently lived on the edge of financial ruin all his life. 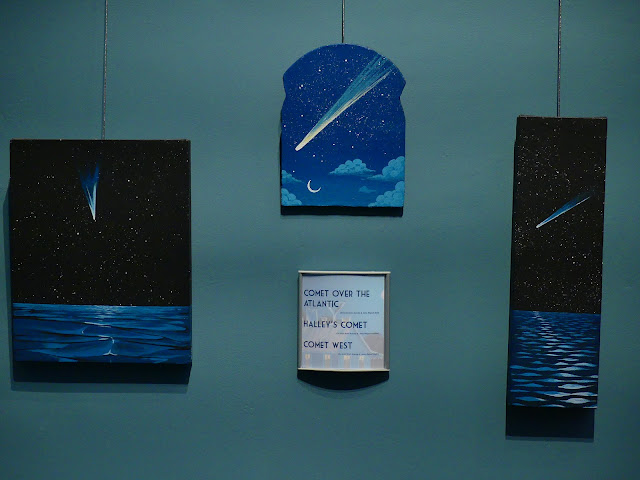 Which is odd because his work is beautifully crafted and has a surreal Dali like quality. Like Dali the artists demonstrates superb technical competence. 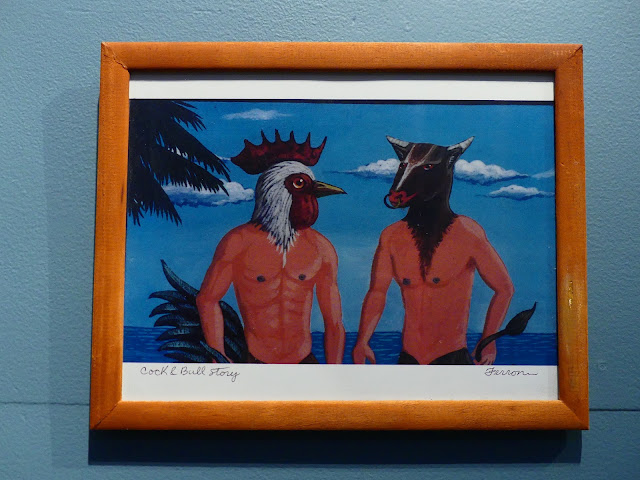 The pictures mostly are light, perfectly executed, in gorgeous arrays of color and I find it hard to imagine they would have been hard to sell had Bell had a mind to sell them for their full worth. 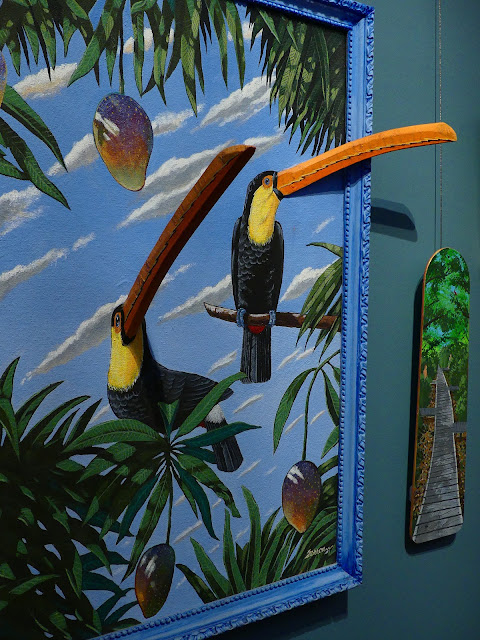 He enjoyed playing with the royal palm concept too, below accompanied by a piece titled "Pigeon Key." 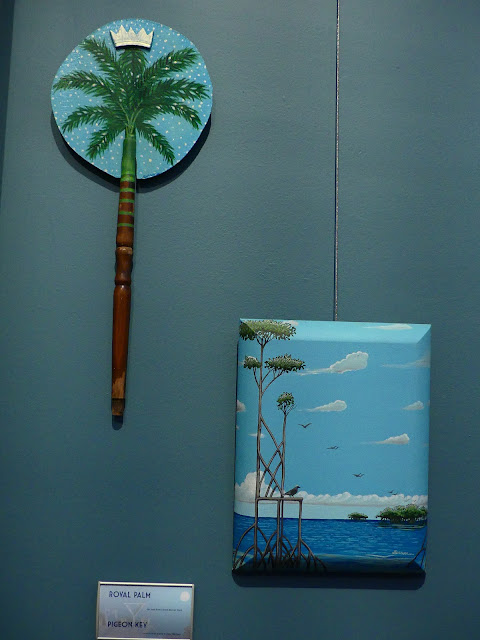 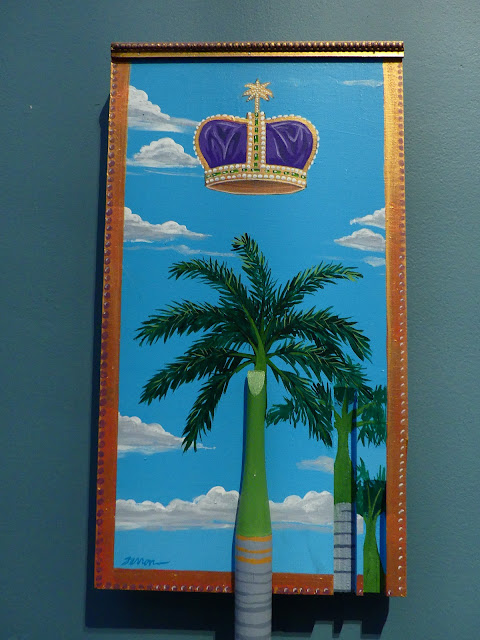 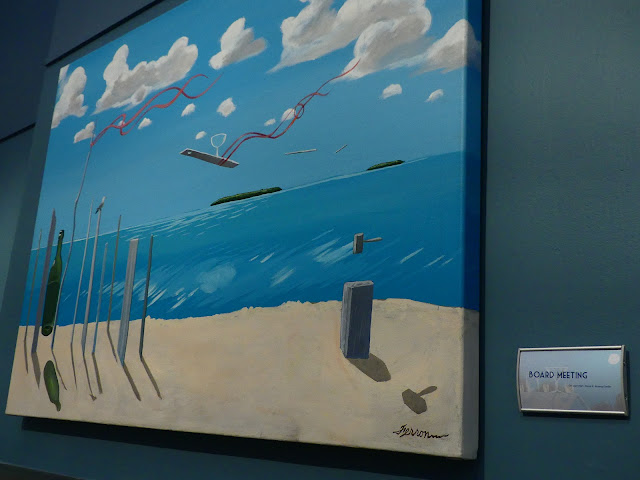 The vertical piece on the left is titled 24 carrot. 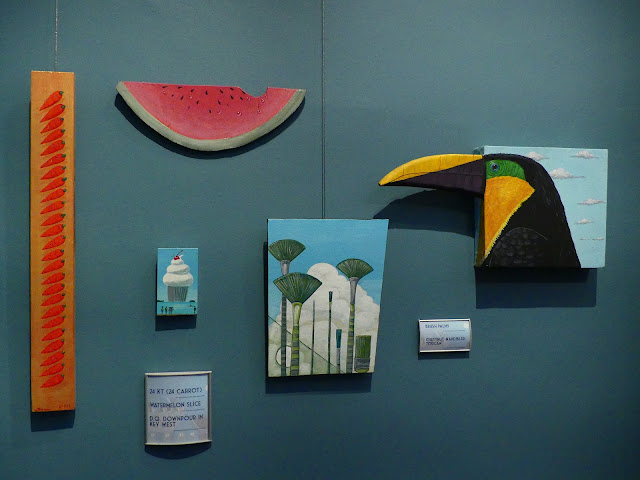 From the Art and History Museum's website is wanted to paste these words as they will disappear soon enough as will the exhibit.


“Ferron’s work is unlike any other artist in Key West,” says Society Curator Cori Convertito, Ph.D.  “It is not idyllic.  It is not intended to evoke daydreams in tourists’ minds of swaying palm trees on a pristine beach.  Ferron was eccentric, and so was his artwork.”

That said, Bell had a self-professed love of palm trees and made them the subject of his final Key West exhibit – “Palm Sunday Show” – held on April Fools’ Day, 2012, a year before his death.  The three-hour pop-up held at Smokin’ Tuna Saloon was a benefit for The Sister Season Fund and the Gay/Straight Alliance at Key West High School, and (by his account) the largest collection of his work ever gathered for one show.

“There are many palms in the world and we have a great selection here in Key West,” Ferron wrote on his Facebook page when promoting his show. “We have Lipstick, Feather Duster, Gingerbread, Christmas, Old Man, Royal, Bottle Palms, and others… and each of them is unique and beautiful.”

True to his wit, paintings included a palm tree with its top shaped like a hand (“Palm Tree Dee”) and feather dusters flanking a lighthouse in lieu of feather duster palm trees (“Lighthouse Keeping”), among many other pun-inspired paintings.

“Ferron loved puns. His artwork typically involved a pun or a play on words,” says Convertito. “He took the lovely scenery around him and incorporated elements of nature (particularly birds) in a pun.  For example, he created various examples of a work he called ‘The Crow Bar’ which was, essentially, a murder of crows standing alongside a bar with cocktails in hand.”

Bell’s passion and creativity were embraced by both of the island communities where he lived and worked.  In Key West, he was commissioned to paint entire rooms with tropical motifs and sold many of his pieces to friends who supported his quirky vision and nature. 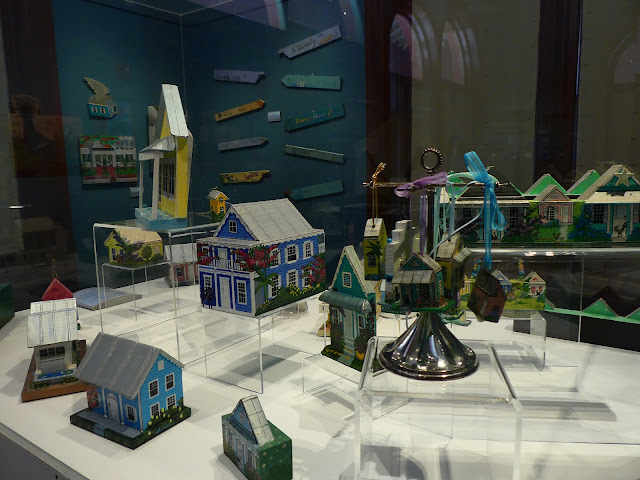 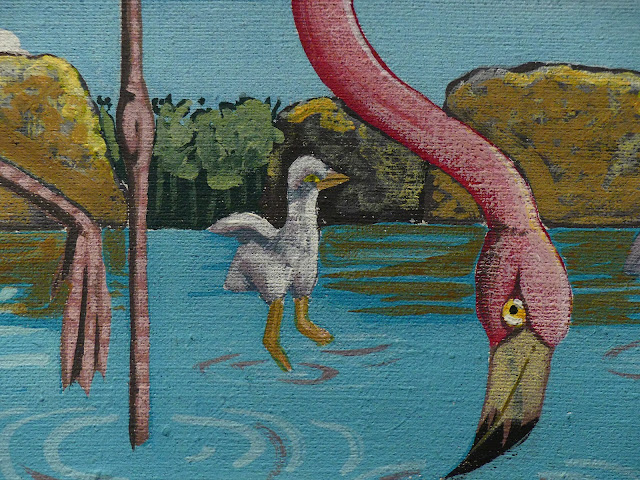 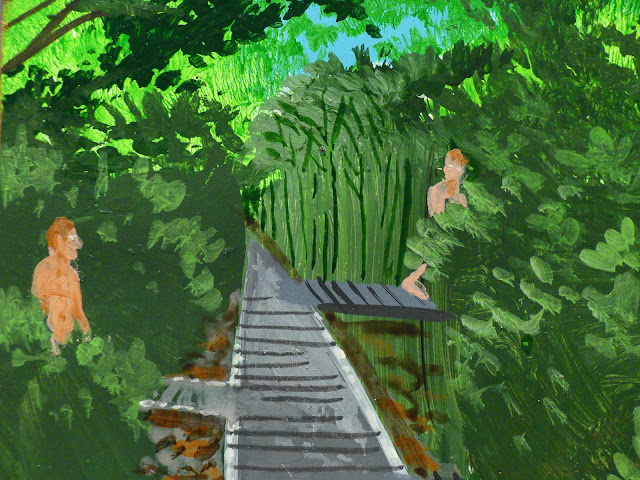 (Unfinished)  Crow Bar - my kind of pun so I put my shadow in the picture! 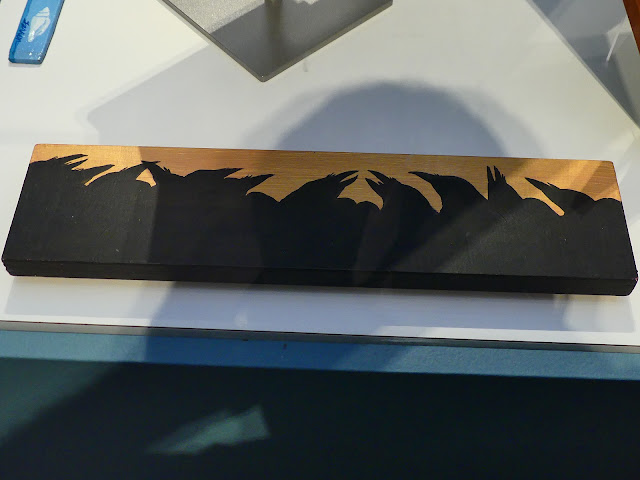 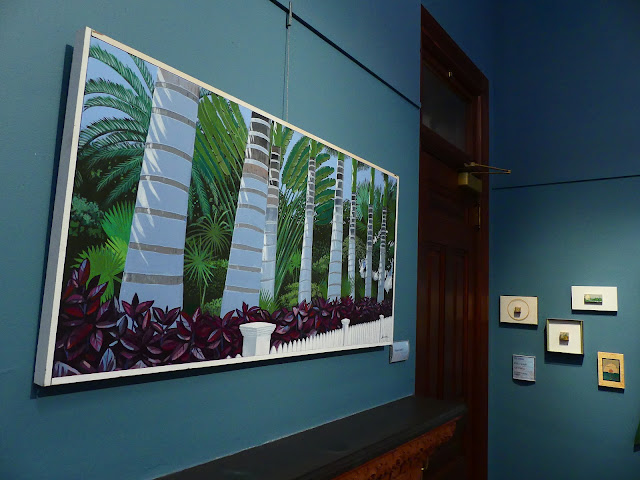 Eggcellent Day In The Keys: 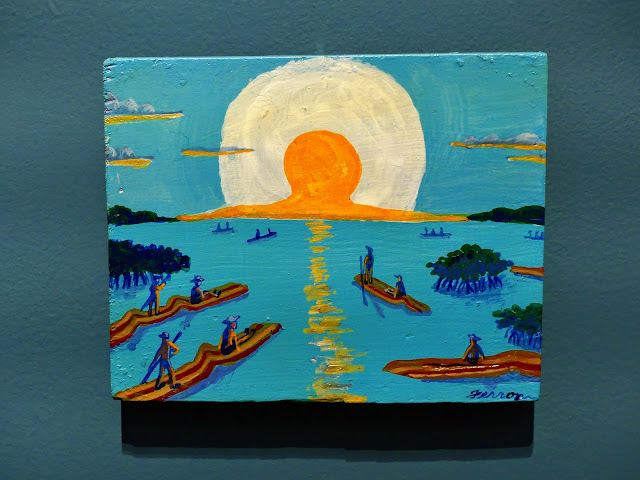 Key West Art & Historical Society celebrates the legacy of one of the island’s most clever visual artists with “Art & Puns: The Whimsy of Ferron Bell”and a special opening reception from 6:00pm-7:00pm on Friday, December 7 in the Bumpus Gallery of the Custom House Museum located at 281 Front Street.  The exhibit runs through February 10, 2019.  The exhibit spotlights the quirky late artist’s trademark visual wit and whimsy, featuring work from private Key West collectors, personal photographs, and newspaper clippings about the unique personality widely known for his off-the-wall and humorous creations.
A self-taught artist, Thomas Ferron Bell began his career at the age of 16 in Chattanooga, Tennessee, moved to Fire Island Pines, New York when he was 21, later splitting his time and talents between there and Key West, Florida. Bell worked full time as an artist, cultivating his audience and frequently bartering and donating his work to fundraisers in the Key West community.
Posted by Conchscooter at 12:00 AM 9 comments: