Deuce's Off The Hook

My wife's two week vacation has started and she wanted to mark the event by trying a tequila at a bar on Front Street underneath the Rooftop Cafe. I am, I confess no great fan of tequila but I am a great fan of her teacher's vacations because they make me feel less guilty about my peculiar twelve hour schedule which allows me lots of days off. So I was guilt tripped into going which was okay. 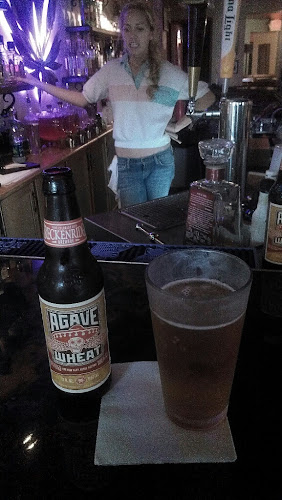 They sell beer as well as fermented cactus juice and I had a bottle of something peculiar looking from Colorado. One has to suppose, if one lives in deepest darkest Dixie, that anything out of Colorado these days, a state where the hallucinogenic weed is liberated as it will never be in strait laced Dixie, will have to be a little odd but the beer was okay, not too hoppy at all and more interesting than most wheat beers. My wife had a jalapeño cucumber tequila or some such thing that tasted of grass clippings and gunpowder but she seemed happy. She was happy enough to chat with the bar tender, a native Texan who ended up coming to Key West from Austin to pursue an education which seemed as odd as Colorado in light of the excellent educational opportunities at her alma mater UT. Nevertheless Ashland, who seemed unusually smart and thoughtful has a Plan, which puts her ahead of many of her contemporaries and graduating nursing school is just the start. Too bad Key West can't sustain youngsters like her. 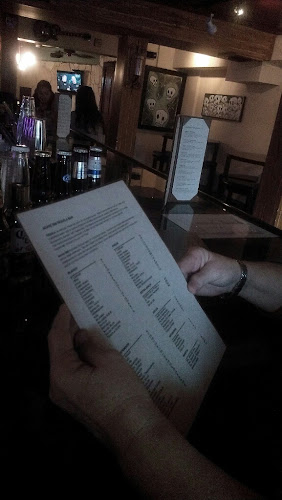 Her original idea was to be a marine biologist of some sort, put off Galveston by the murky Gulf waters of Texas' coastline (I empathized, recalling a cold front I sat out in my freezing cold sailboat anchored in brown frothy waters off Galveston one Spring on my way to Florida) so she came to Key West to try her luck. Then she discovered marine biology students are very passionate she said with emphasis about their subject matter, and she realized she lacked their level of interest in sea life. She decided to beat a retreat while she had time figuring nursing would offer better opportunities. 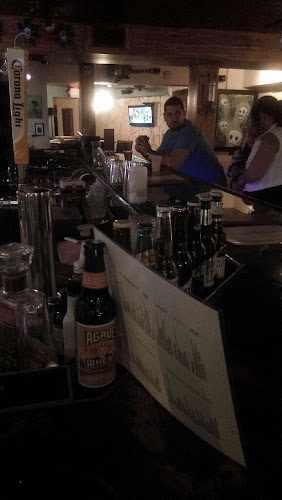 A wedding party showed up and as Ashland asked them if they wanted their usuals I deduced they had been bracing for the forthcoming nuptials with a fair few tipples in the tequila bar. I seem to recall rather more furniture moving and sitting around looking serious as plans were made before my wedding. Perhaps I just remember the good bits.

It was time to move on and my wife had decided that a new place on Simonton was where we would eat. We had heard from several people that the place was over the top and we were ready to tear ourselves away from our favorite, Santiago's Bodega and risk something new. I'm glad we did. The view from the outside was dark and serene not at all the diner decor I had imagined. 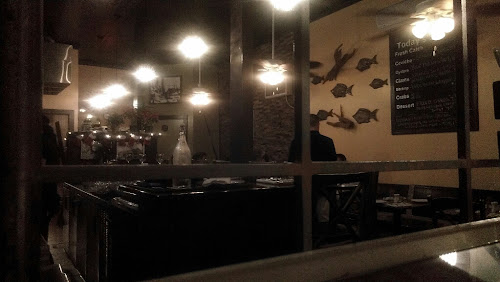 With a name like Off The Hook you'd expect fish to be on the menu and there was plenty to be had, including shrimp oysters all the way through the hogfish and duck bacon which sounds gross but probably isn't. 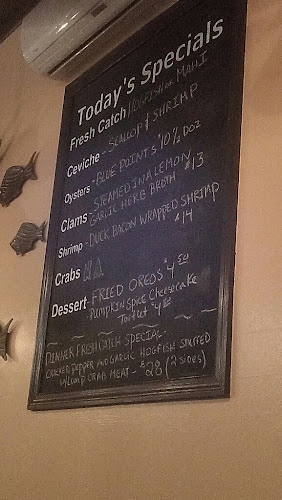 Service was just as you'd like it, attentive, informed and not oppressive. At first the place was half empty but even when it became packed our server Sophia kept an eye on us and was the consummate pro, which was a really pleasant change from haphazard service one frequently encounters. Untrained servers ruin a meal out for me. 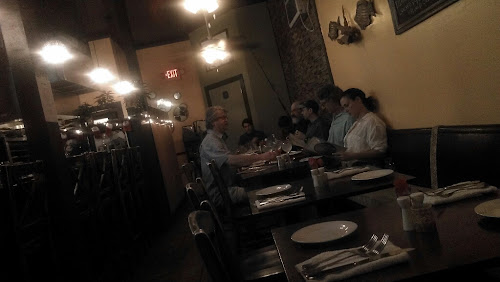 The restaurant has applied for a wine and beer license but the city has even unable to produce the required document ever since the place opened last November which fact struck me as profoundly odd as this place has been a restaurant or deli since I can remember. Happily we had already decided we had had enough alcohol and planned to have water with dinner but we were advised we could have a free glass of red or white with dinner until they get the ridiculous piece of paper. Or you can bring your own which I think can be a really smart idea no matter what the circumstances. Nevertheless we were fine with chilled filtered Chateau du Tap 2013: 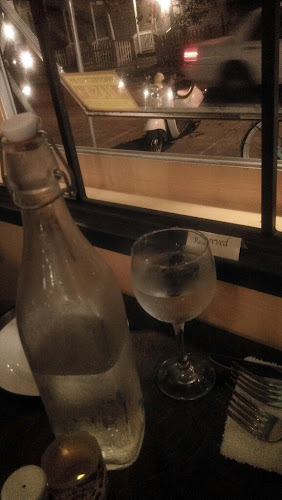 The mussels were excellent and the broth was tangy with white wine and some sort of citrusy element that made it tart. It was a great change from the sweet tomato broth that seems the inevitable accompaniment for mussels and clams. We had conch fritters just because we haven't had any in years and they were better thank expected. I have a bit of prejudice against the fritter owing to the fact that it is usually just a corn ball deep fried and is essentially a hush puppy masquerading as fried conch. In this case the little balls of corn were liberally supplied with pieces of conch and could fairly be said to meet the description of a true conch fritter. The horseradish dipping sauce was excellent and unexpected. 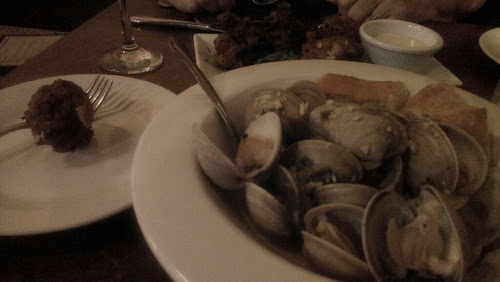 We shared a main course to leave room for the deep fried Oreos but in the event we ran out of steam. We got the hogfish stuffed with crab and it was perfect. The coleslaw was light and fresh and the sweet potato tater tots were piping hot and crusty. Our server suggested ketchup or syrup but I waved away the ketchup intrigued by the syrup. I am not one to usually mix sweet and savory, I don't like the idea of pineapples on pizza for instance, but in the case the syrup did something magical to the dish, mixing the flavors and requiring a brush with coleslaw to clear the syrup before taking a bite of fish. 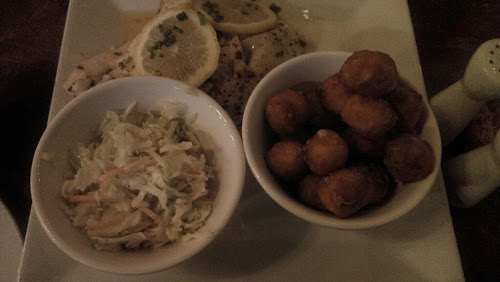 I asked why this place is called Deuce's...and Deuce himself came by to answer, an enthusiastic beaming face that looked, not surprisingly, much younger than me. This place deserves to succeed, with table and bar seating and soon the stupid alcohol license, safely after the holidays- duh! 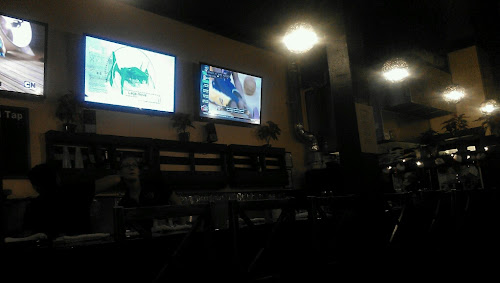 I only wish the habit of putting TVs in these places would kindly die a death, especially in a place with superior food and excellent service, television is crass. No luck so far on that, but Off The Hook is worth a visit. Just sit with your back to the screens.