The Florida Keys by their nature offer limited opportunities to spread out on land. When you live near the end of a 120 mile chain of narrow flat islands you aren't going to have many wilderness hang outs. I have my favorite on West Summerland Key in sight of the Old Bahia Honda Bridge, a location that shows up frequently on this page. I was there yesterday thoroughly enjoying the sun and a cool breeze and I was not alone. 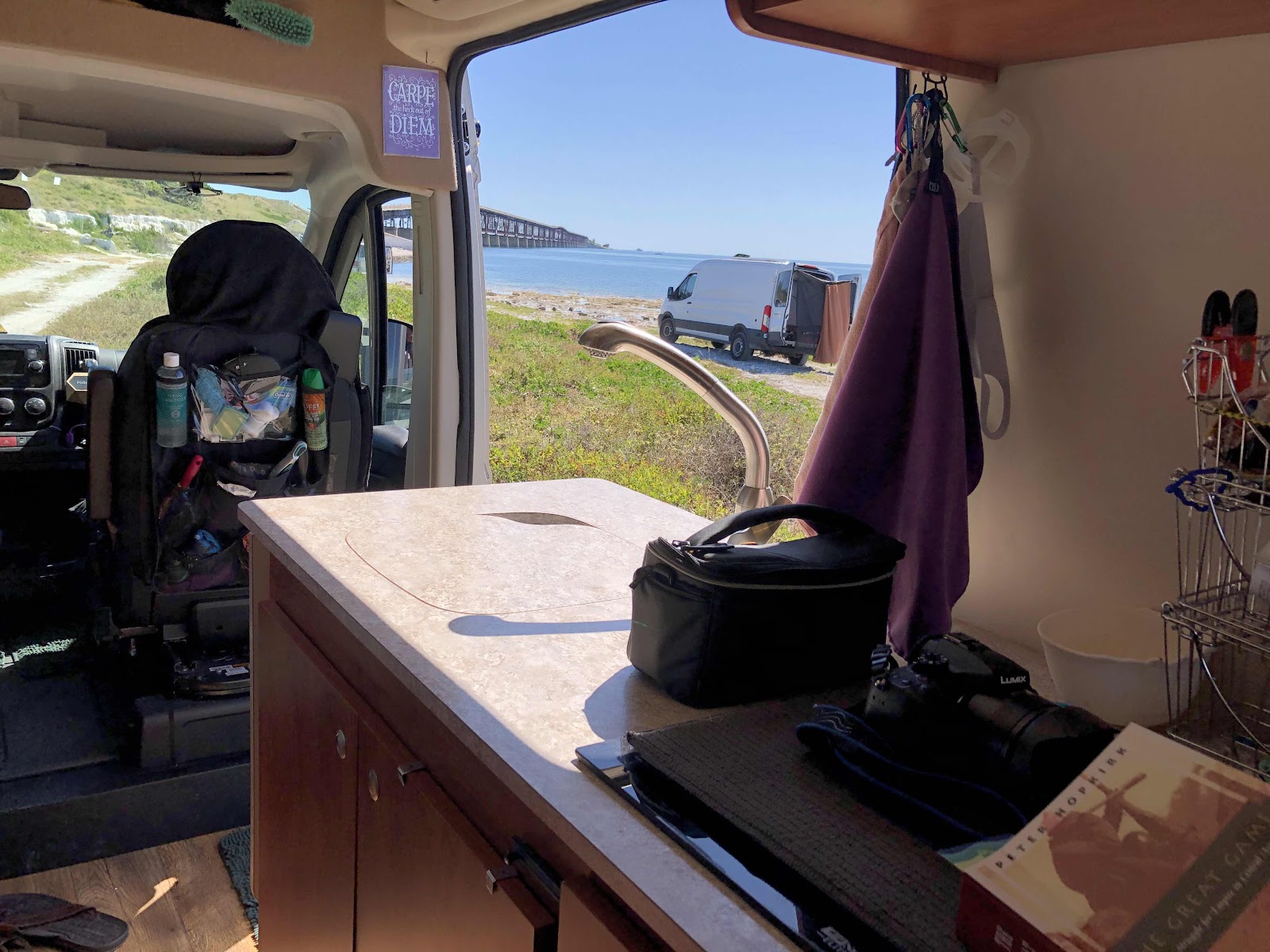 I have spent the night along the seawall and enjoyed the relative quiet even though I slept just below the highway, pretty much out of sight and at peace with the world. The track became viable after Hurricane Irma tore down the trees and the state decided to build up the wall with rip rap and gravel which anglers drove out on and flattened into a bumpy but viable trail.  Some enterprising folk then drove all the way out to the point and left some rather ostentatious campsites with fire rings and the usual trash... 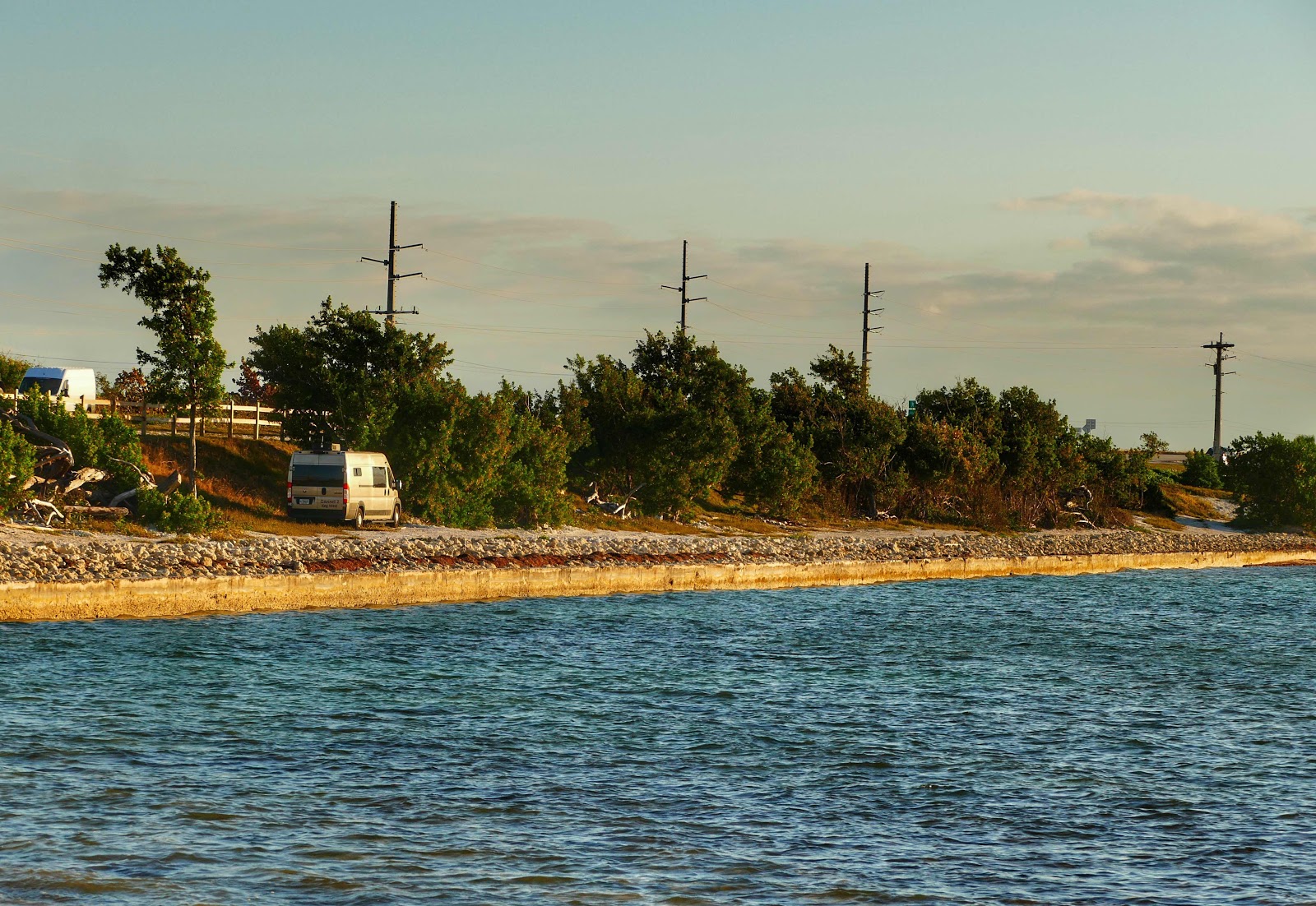 I knew it wouldn't last...it couldn't last and this small privilege has come to an end of course. You won't see pictures of Gannet 2 here again: 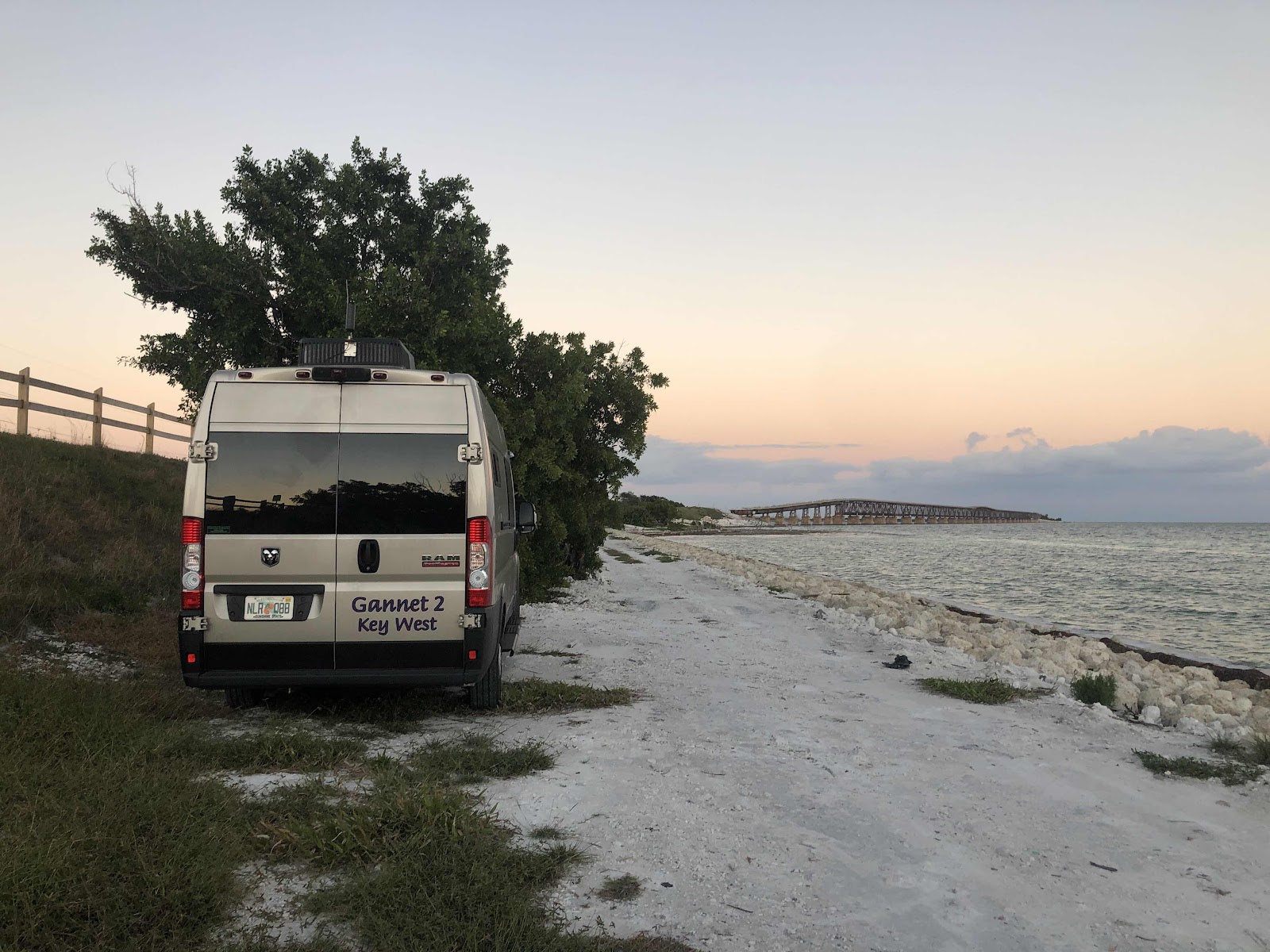 I wasn't therefore shocked when I came back and found these cement barricades, a stock item used by county and state governments in the Keys to close off the few dirt trails to all terrain vehicles seeking some off road fun. 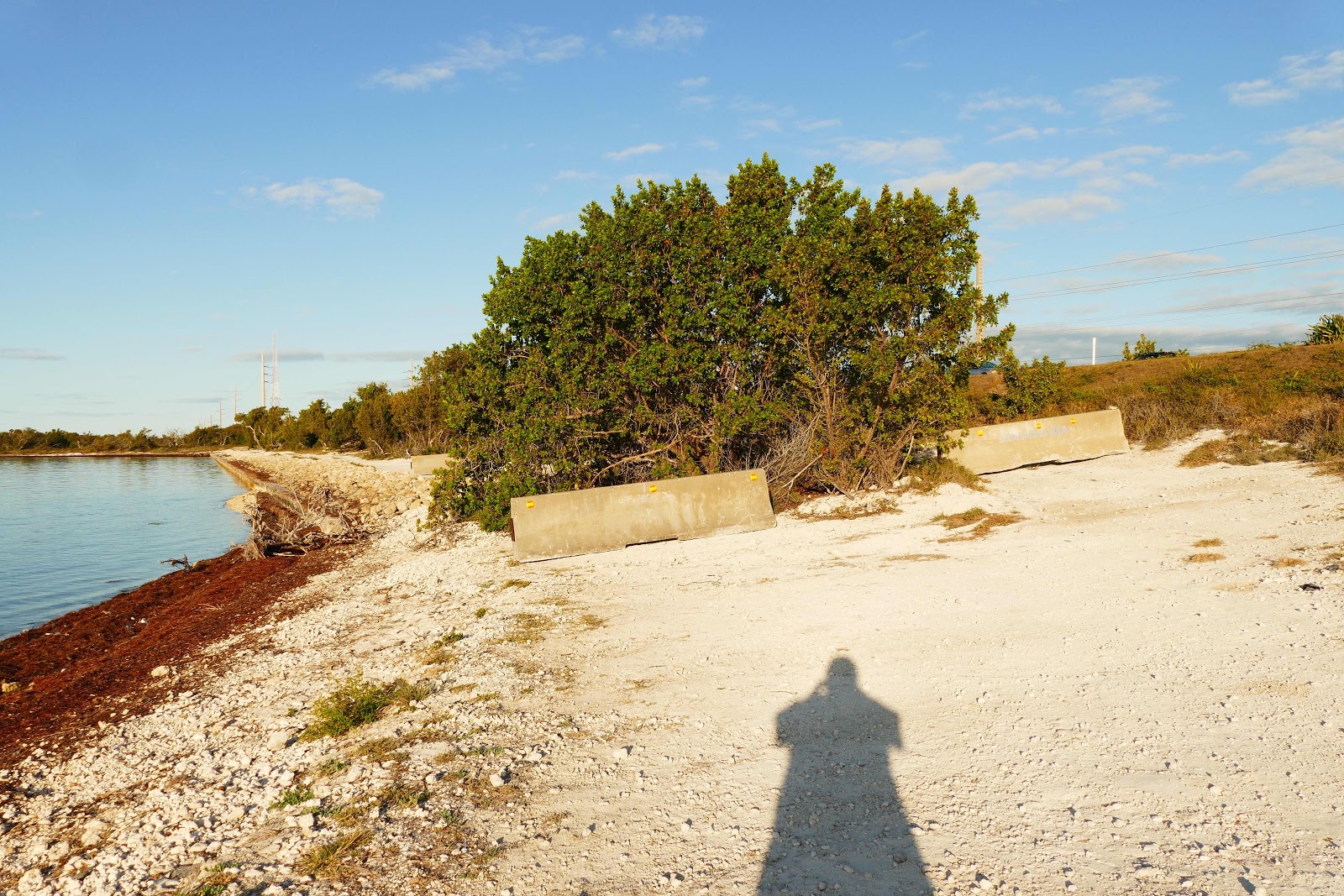 For someone like me (and Rusty) who like to walk the barriers will actually work to our advantage as most people seem to find locomotion too arduous and now that motors are effectively banned we will be alone out on the point. In fact a fisherman did just that yesterday, parking his truck here and venturing no further on foot with his rod. 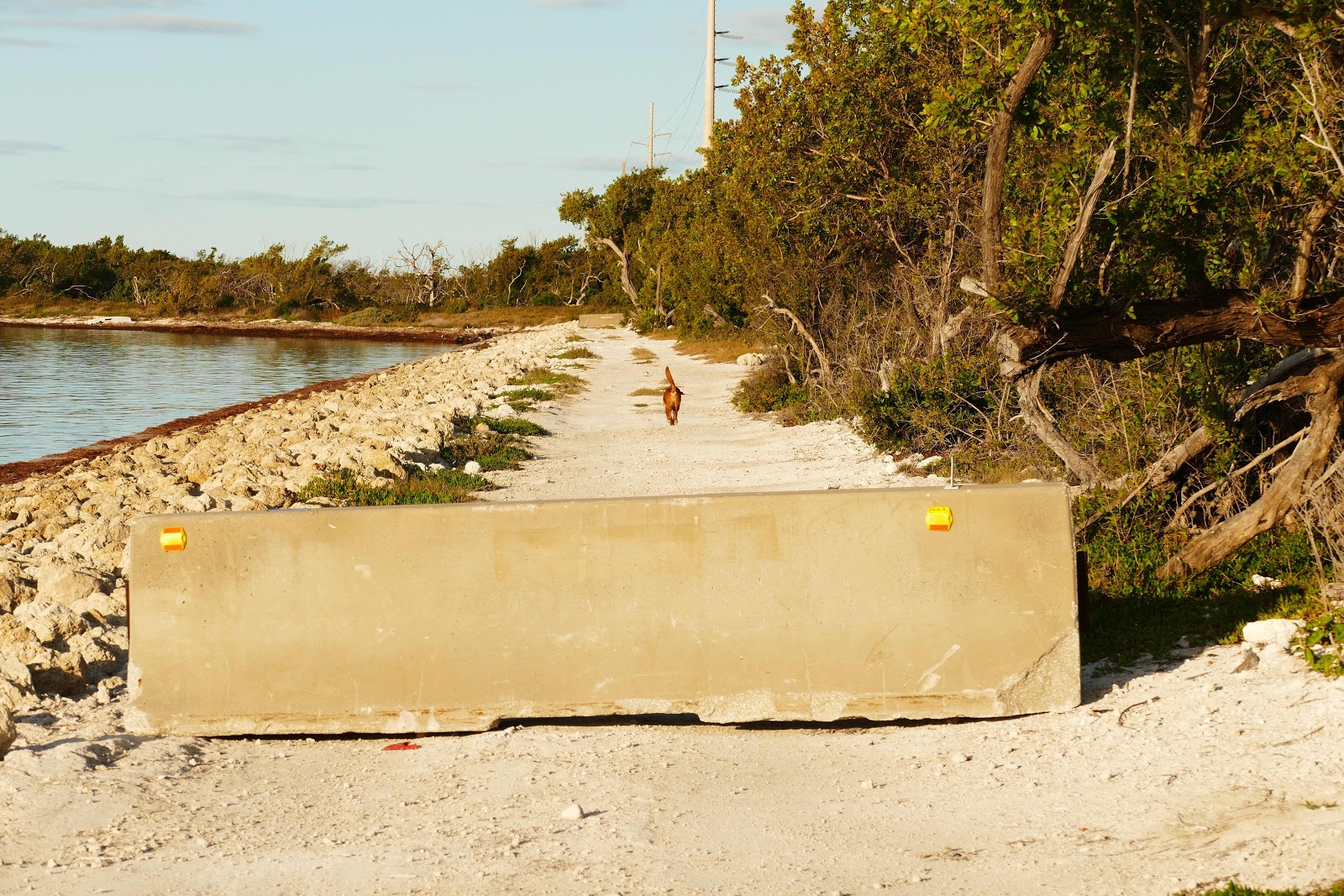 I would also like to think we will walk trash-free. I take pictures and leave footprints and I carry a bag for those occasions Rusty feels moved to extrude an egg or two. Like the half-wild dingo he is, he likes to dump on the edge of the trail, unobtrusively, and leave little trace which I have to find and remove, not always easy. 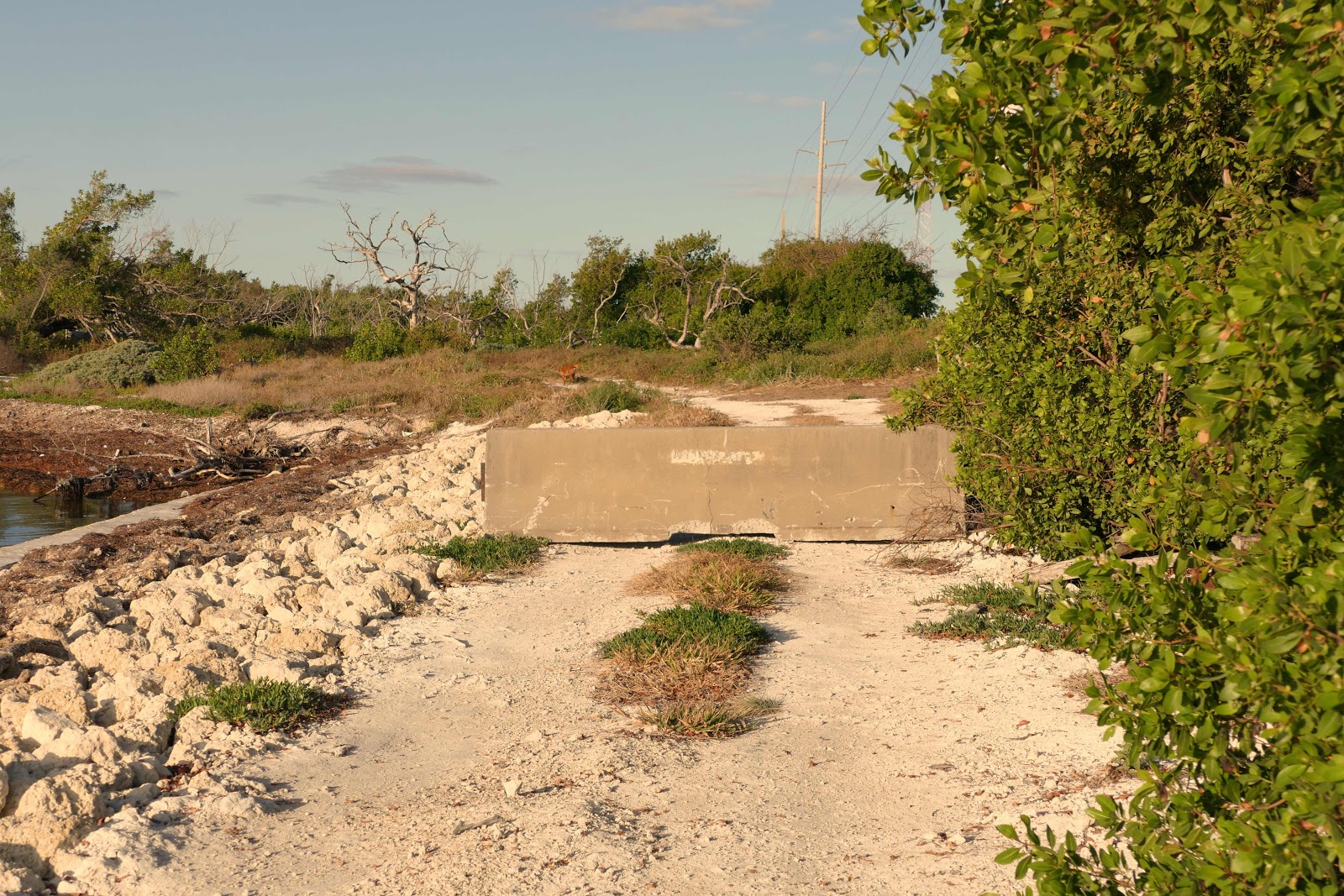 I confess I was surprised to see tracks coming straight down off the highway here a couple of weeks ago. I guess I wasn't alone in my astonishment because they aren't doing that again! 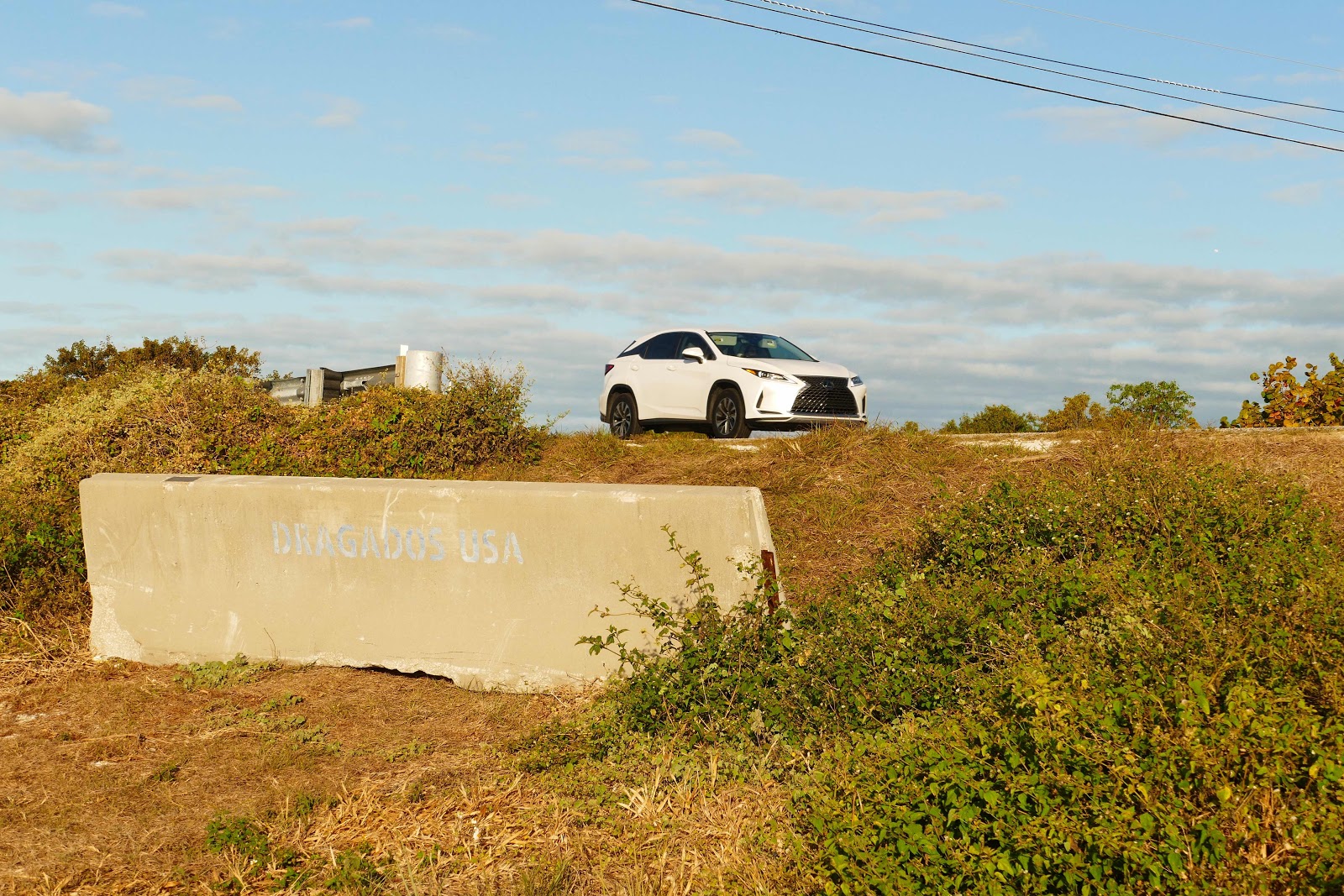 It seems as though the state had barricades to spare as they put them everywhere, carefully butted up to impenetrable tree trunks where possible. 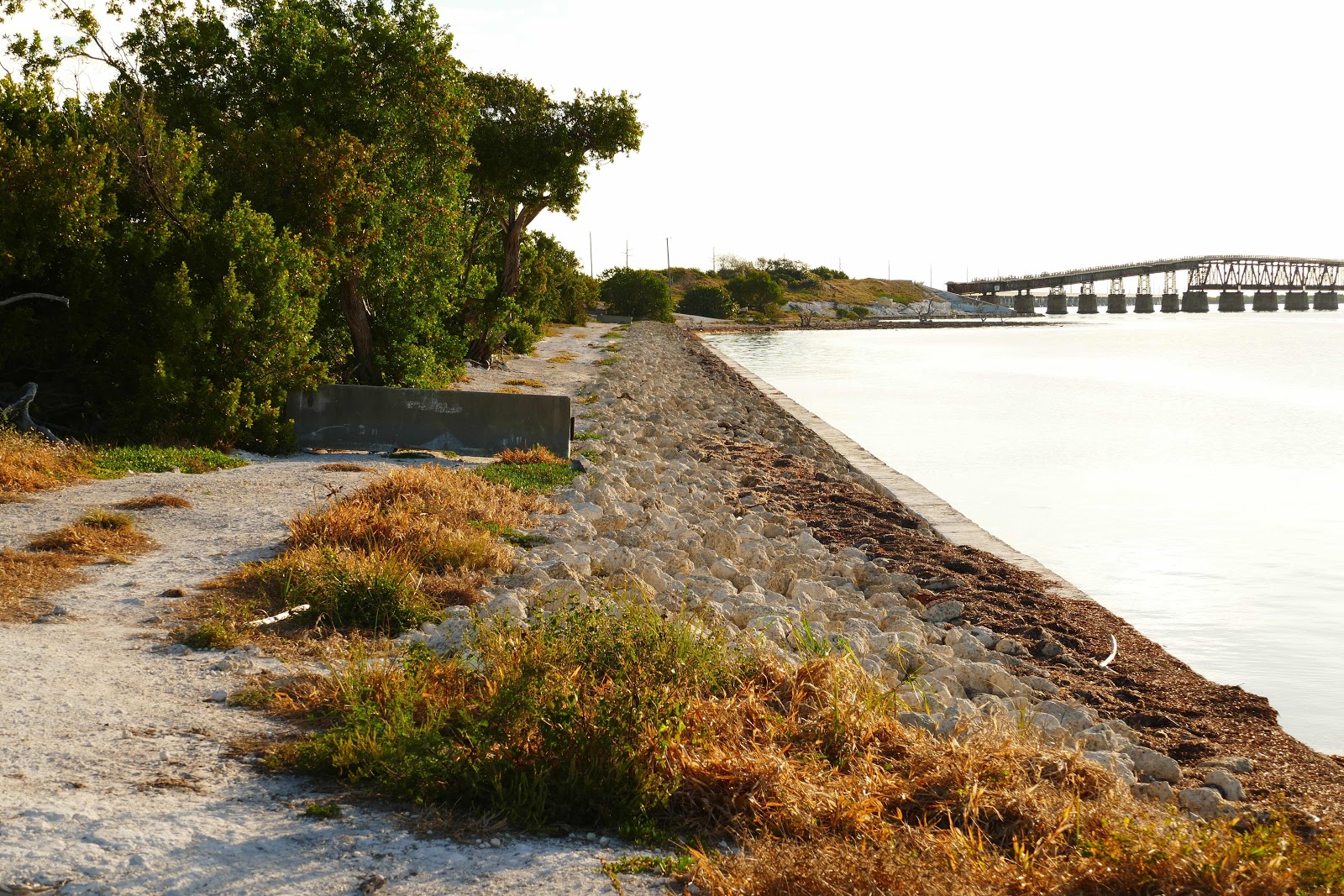 This one surprised me, carefully placed between two trees to avoid end runs by determined drivers, on a trail that didn't exist last year. Somone checked it out, someone else followed and then the trail was marked and became, as you can see, established. 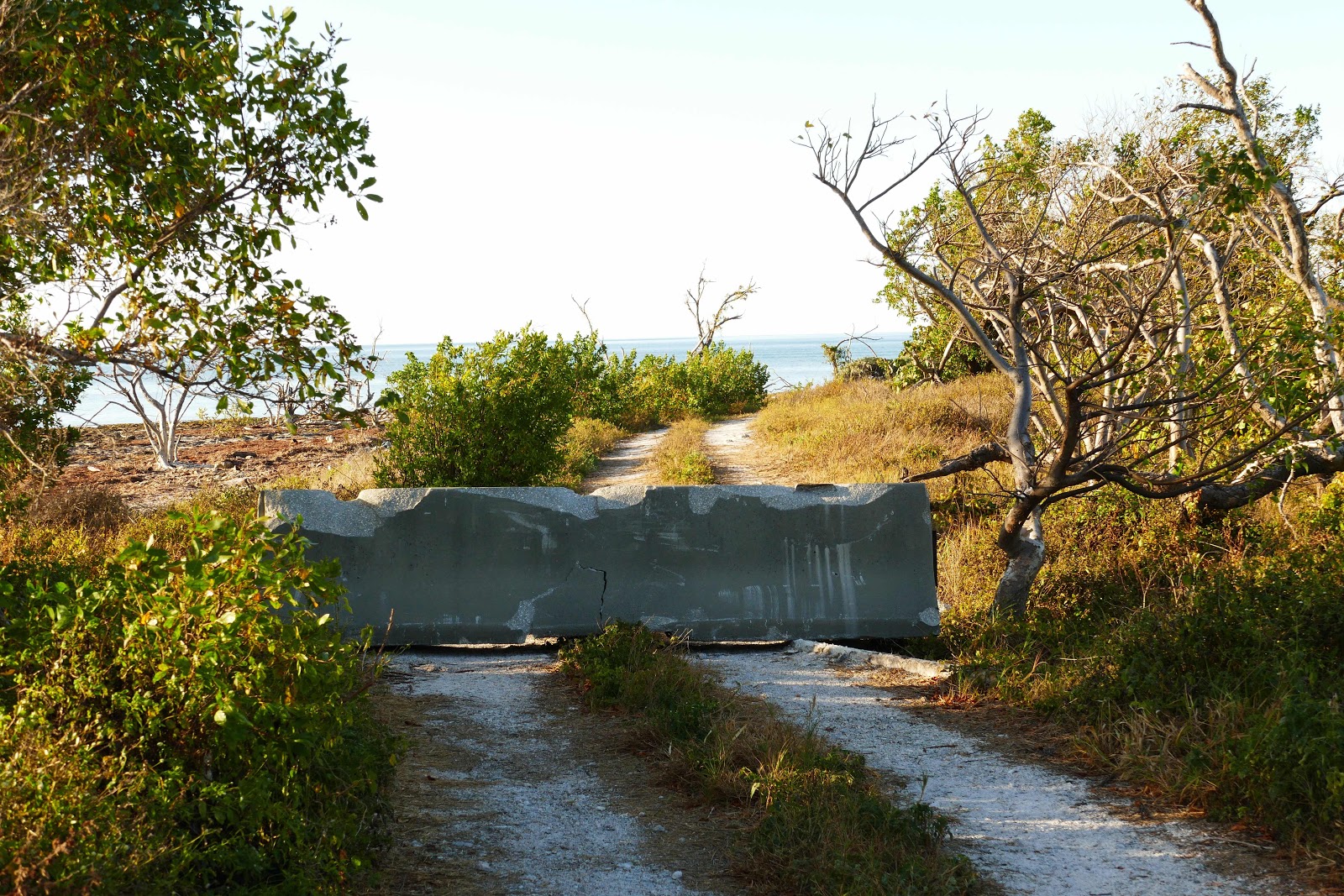 I used to walk out here picking my way through the grasses until this freeway was trampled through the grass.  I also found some graffiti, high flown sentiments written in indelible marker on a plank. I took the picture and moved it back up out of the way where I found it. 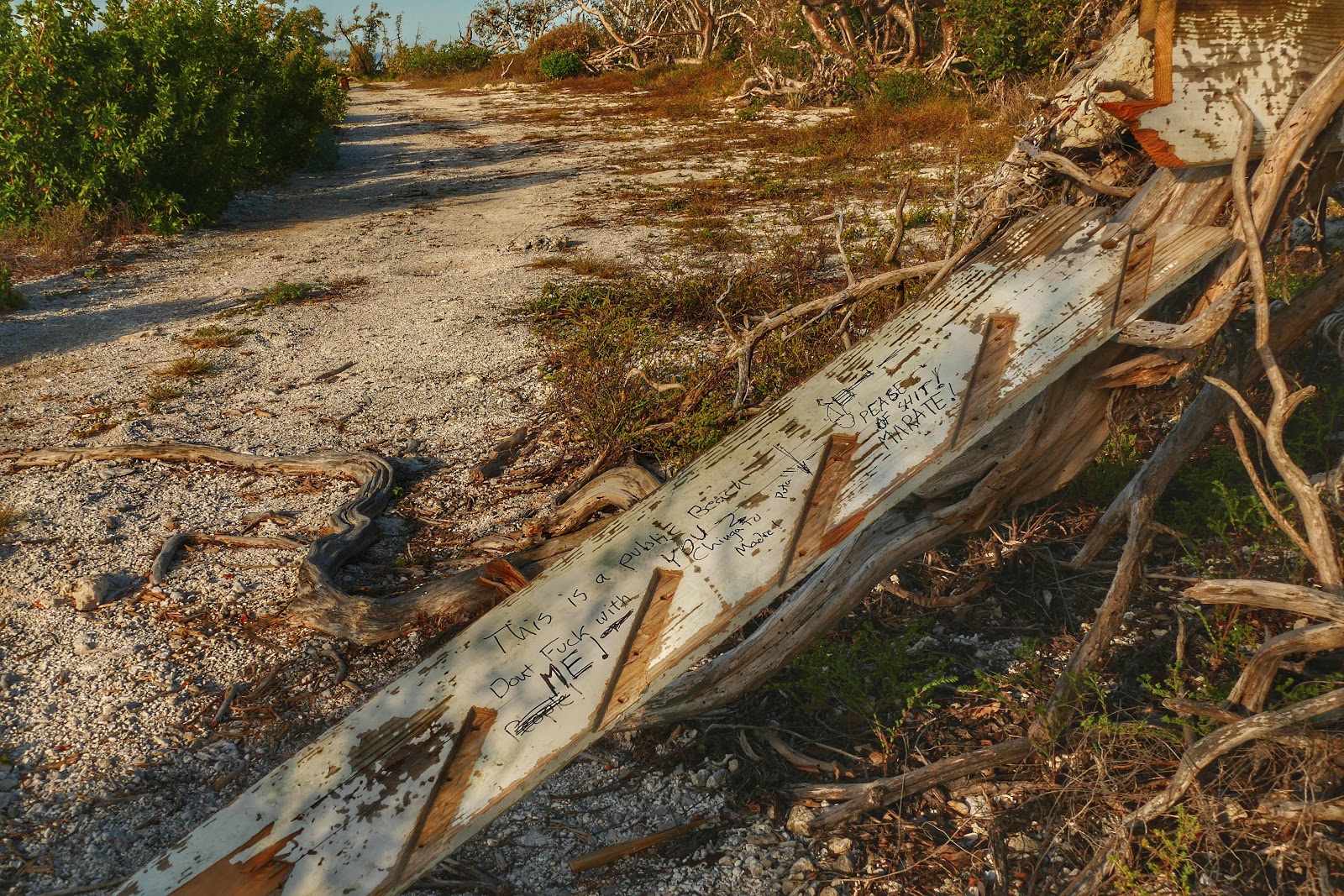 The great thing about this spot is that there is no beach, no sand, no attraction for people to come and feel like they are in a postcard. To me that makes it doubly attractive as people stop their cars, take a look, walk a bit maybe and then take off again. 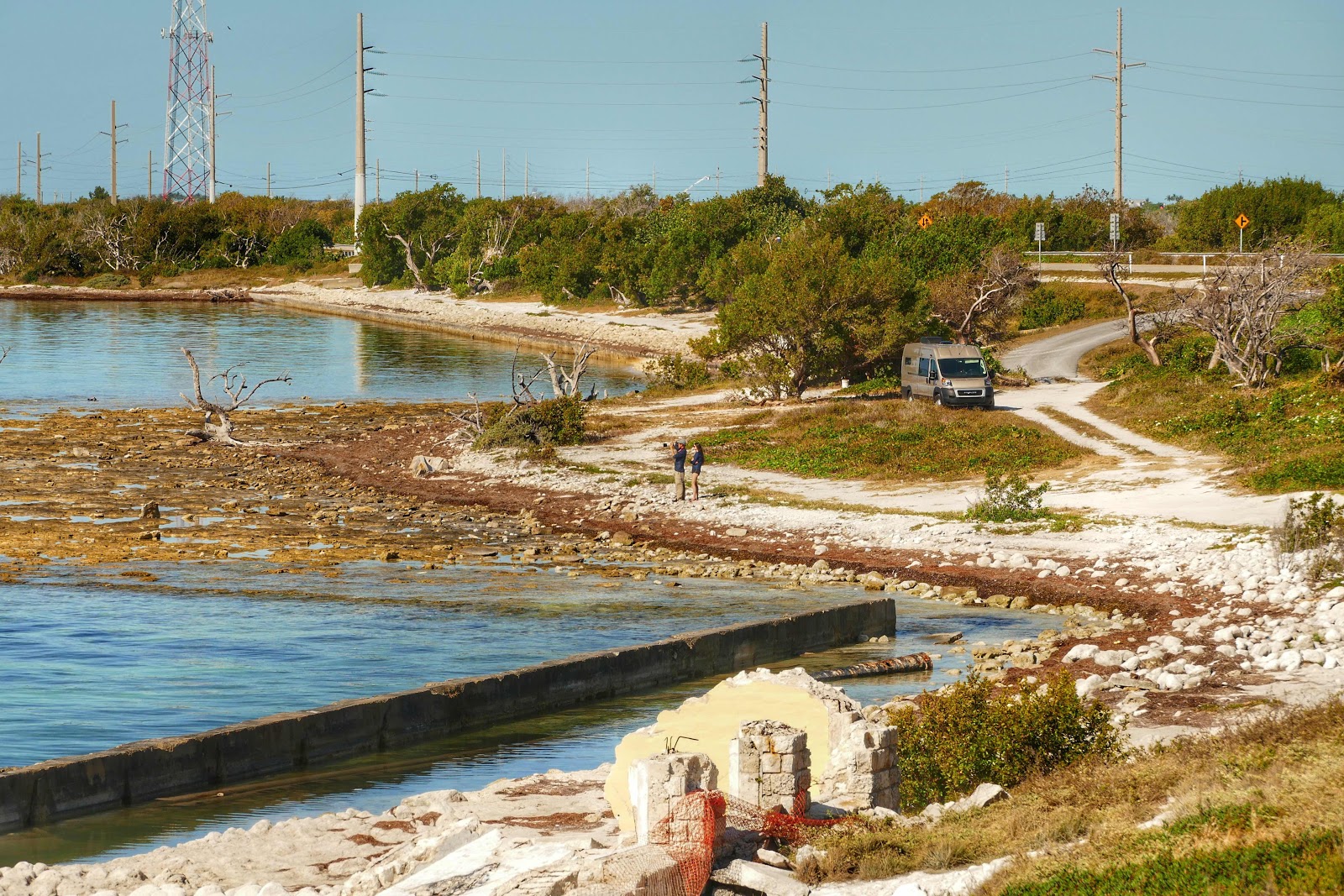 Rusty enjoyed his walks and then took a philosophical approach to change in the Keys. Change is inevitable he said and its rarely for the better when too many people want to jostle in too little space. He has a point. 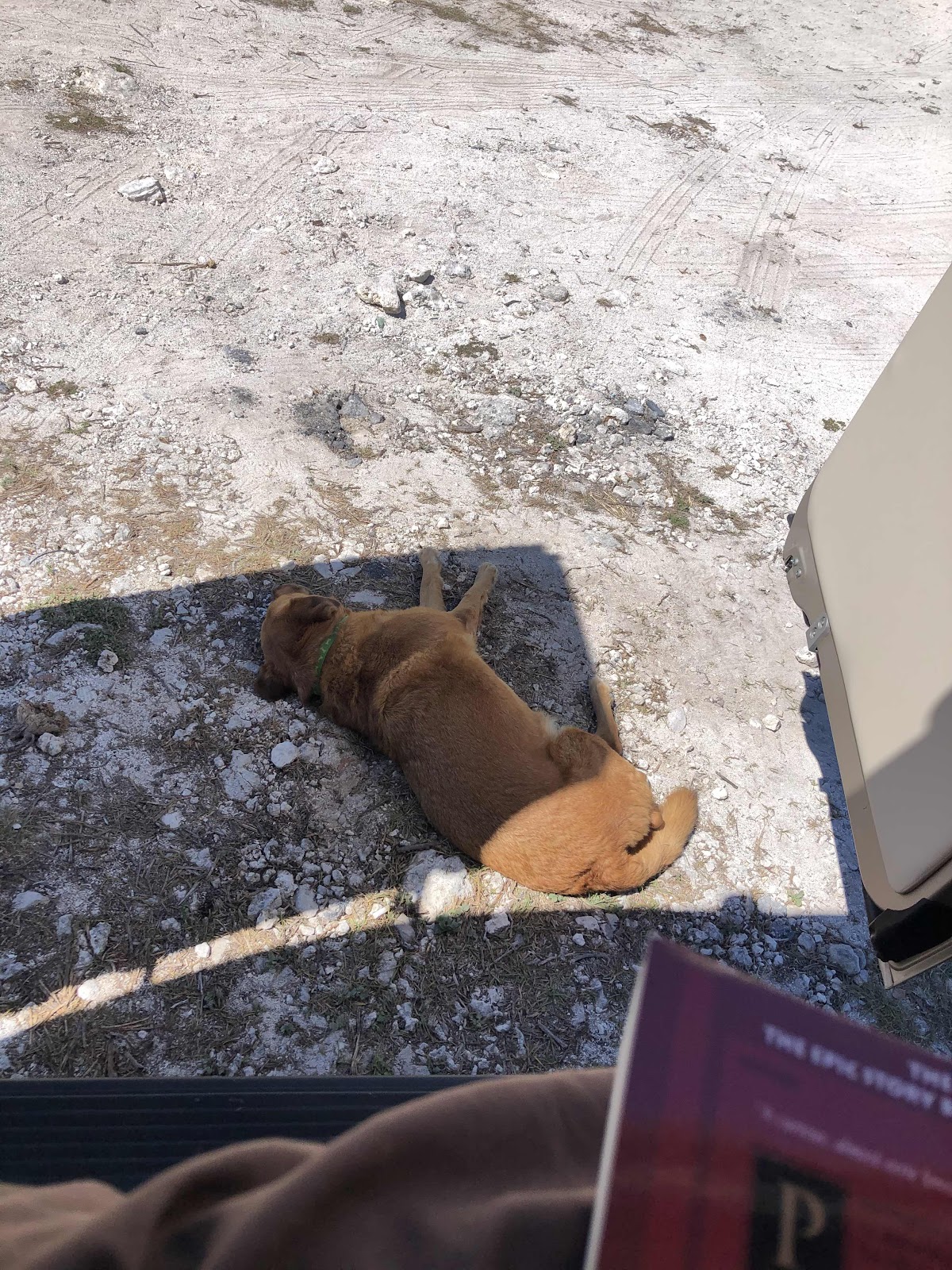