Vespa Riding In The Everglades

So there I was  in the Seminole Village, late morning, with increasing heat and  the nub of my journey ahead. 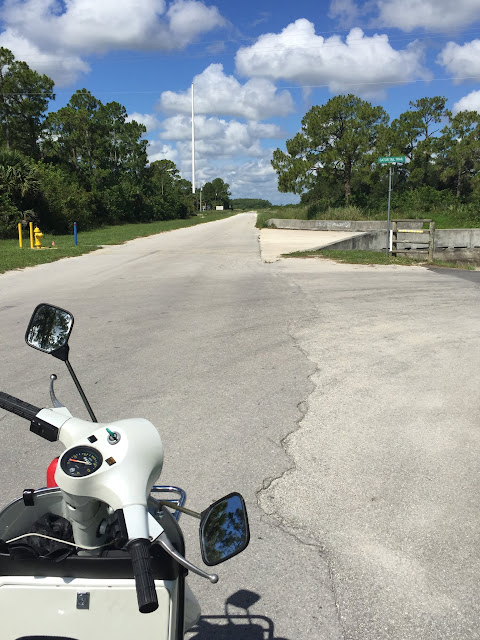 From studying my maps I figured it should be possible to cover the eight miles from the Swamp Safari to Hopkins Tropical Fruit Nursery where the asphalt from Highway 29 appeared to end. 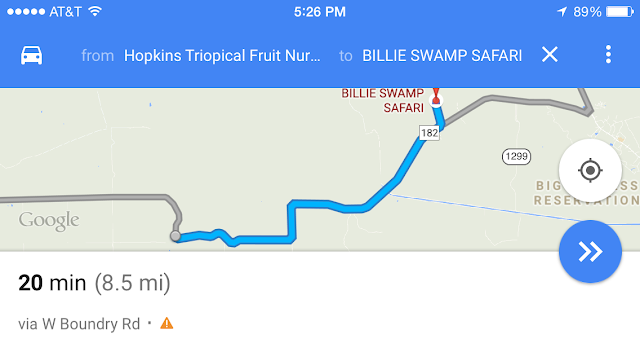 It looked easy enough studying the Google satellite  view as the street view ends just past the swamp safari and gets nowhere near the nursery. So off I went off the paved road back into the dirt. I wondered if my path might be blocked off by a gate such as this one leading up a mysterious side road: 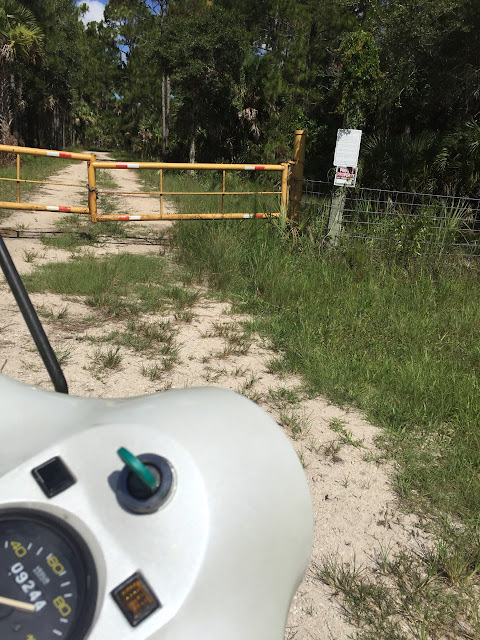 The West Boundary Road is wide open and spacious and quite easy to ride for the most part. 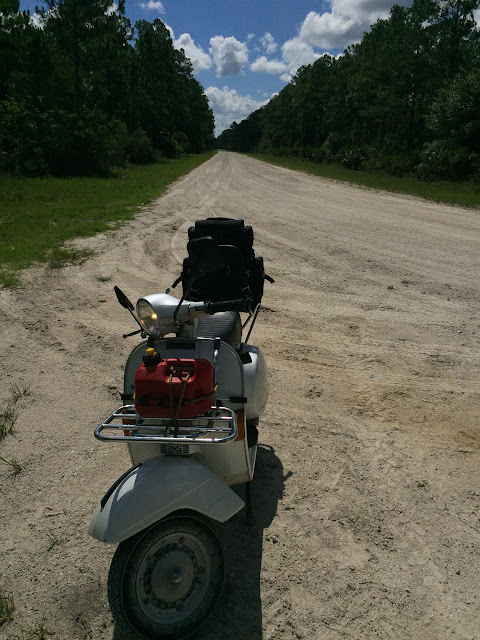 The forest on either side looked impenetrable with undergrowth under the pine trees. 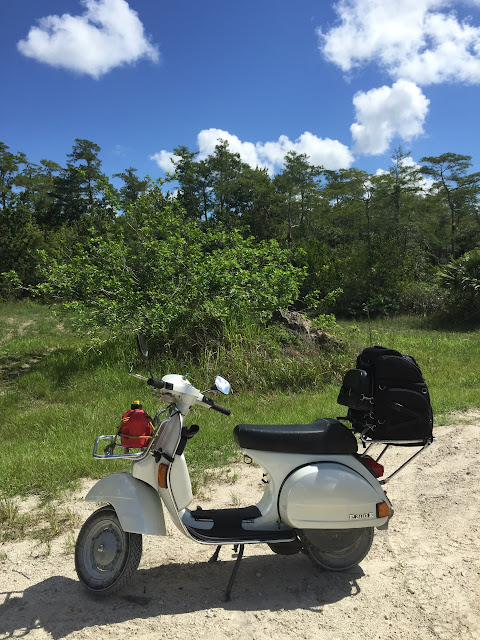 Me looking slightly daffy posing for the self portrait. 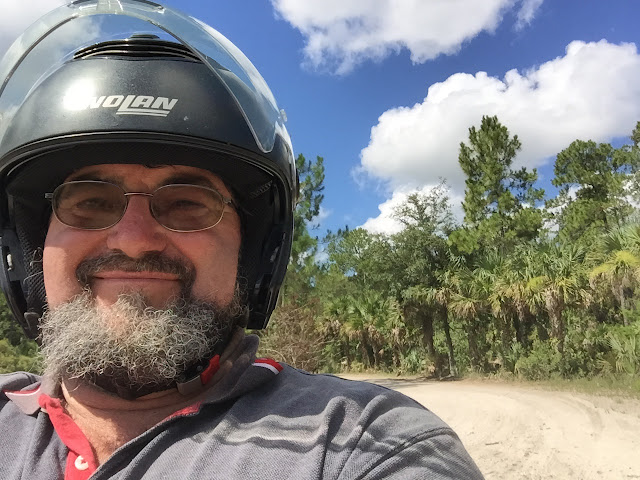 In its own way it was quite scenic though I wondered how creepy  it would be coming home to the ranch house on a pitch black night. I would get creeped out picking my way through the darkness. 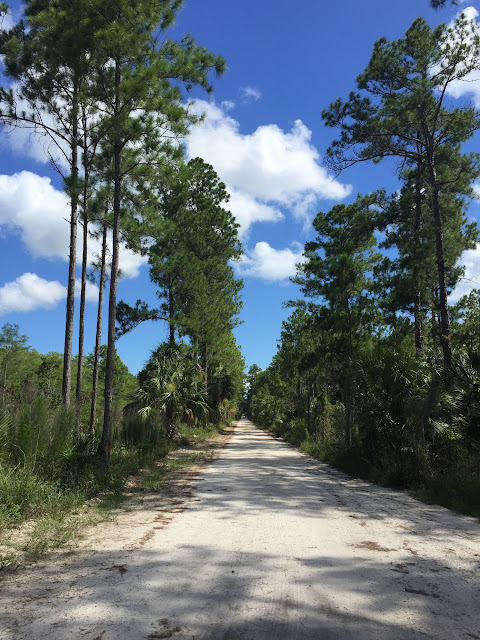 I was of course completely alone, no sign or sound of another human aside from the buzzing of my two stroke scooter popping along at 25 miles an hour. 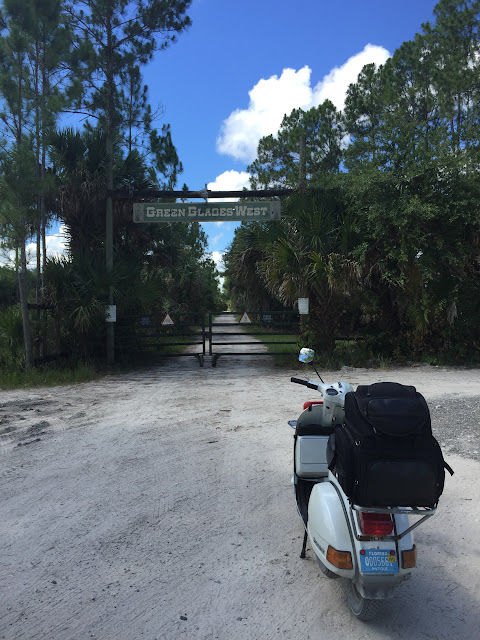 The photo above shows what I thought might be a dead end but as I got closer I saw the boundary road turned off to the right. The picture below shows the actual end of the road. There was no way I could squeeze the Vespa past to get those last two miles done, and even had there been I don't think I would have risked it. I don't suppose the ranchers here are any less friendly than anywhere else one might choose to trespass. However this lonely emptiness gave me an overriding sense that I should stick to the public road and mind my own business. I turned around. 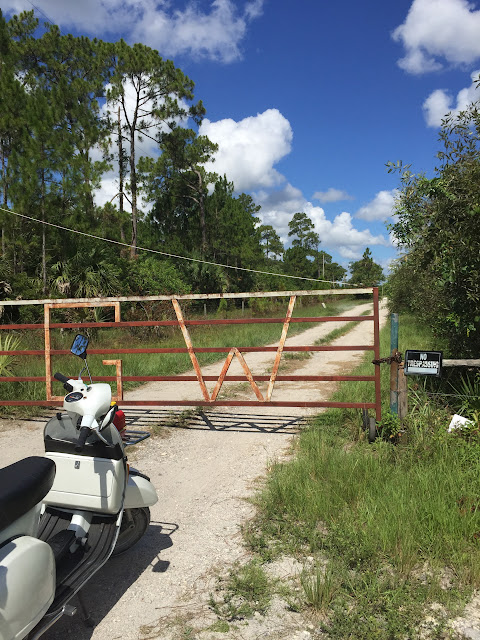 There were open spaces, strangely reminiscent of meadows, lacking only cows horses or goats grazing them. 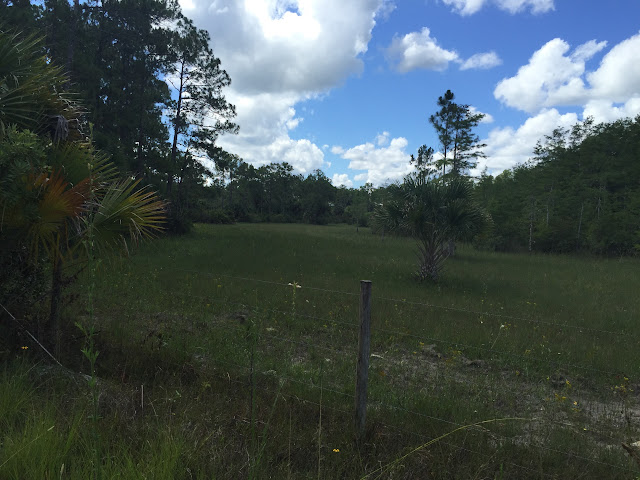 You can see the drainage efforts in the Everglades have been quite successful. This meadow, as crazy as it sounds, reminded me of wooded pastures I've seen in Italy, small fields cultivated by small holders who value each foot of land. This spot just looked forgotten. 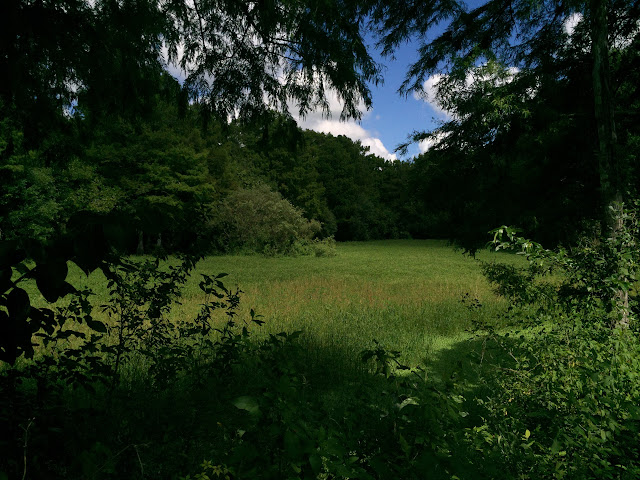 I enjoyed the shade where I found it and decided to keep moving until I got back to the Village where I might figure out my next move. 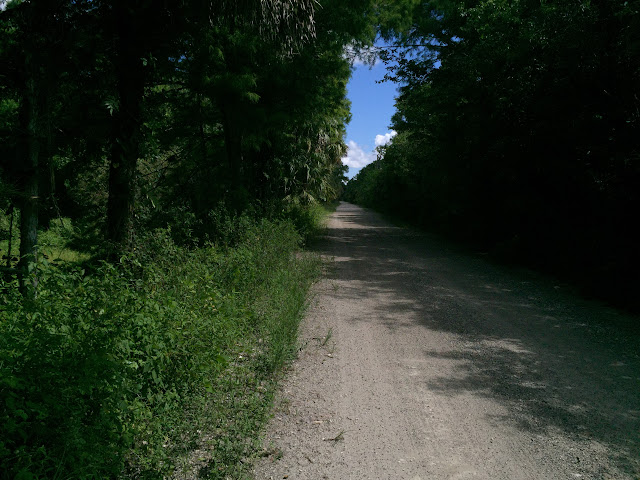 This is what the woodlands looked like either side of the road. There were a few tracks that meandered off out of sight but I figured whatever might be at the end of them, if anything, had nothing to do with me. 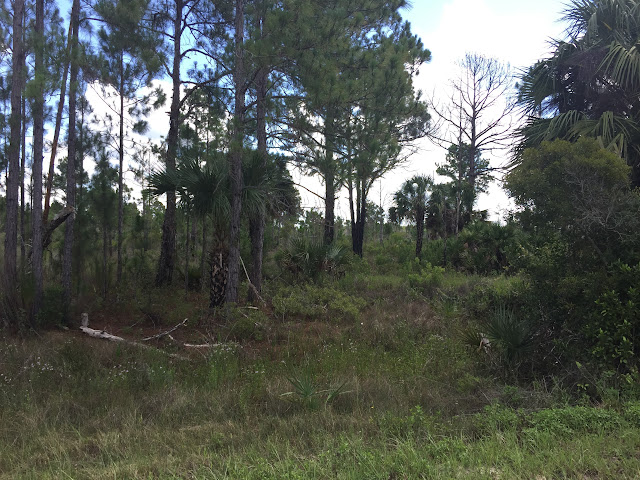 Frankly the prospect of riding the way I had come sounded intensely boring to me and I had no desire to face another hour of gluing my eyes to the dirt road ahead of me to get safely back to Highway 27. On the other hand I was pretty sure making a huge deviation almost to Lake Okeechobee would get home for a very late dinner indeed. I decided I would come back one day and approach the boundary road from the west and just see for myself how far in I could get. I am curious, that is all. 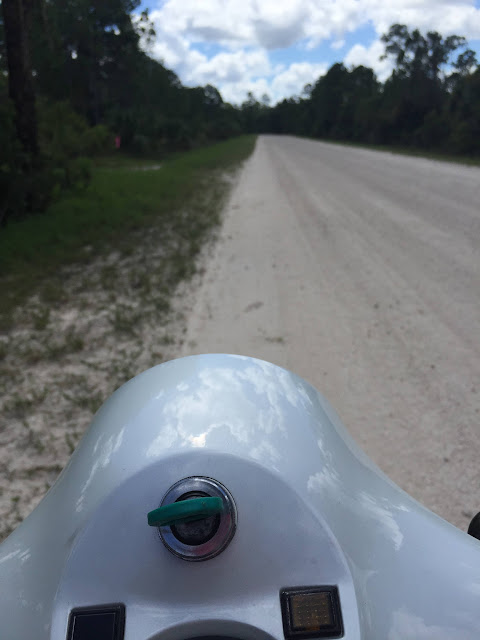 The final stretch of road back to the swamp safari air boat base had a lot of sandy pits which could easily topple an incautious rider. Sand, especially in isolated puts like this are easy to fall over into as the front wheel suddenly slows to a stop and probably twists to one side or the other bucking the rider like a bronco. And over you go. I kept a weather eye out for these deformities in the gravel: 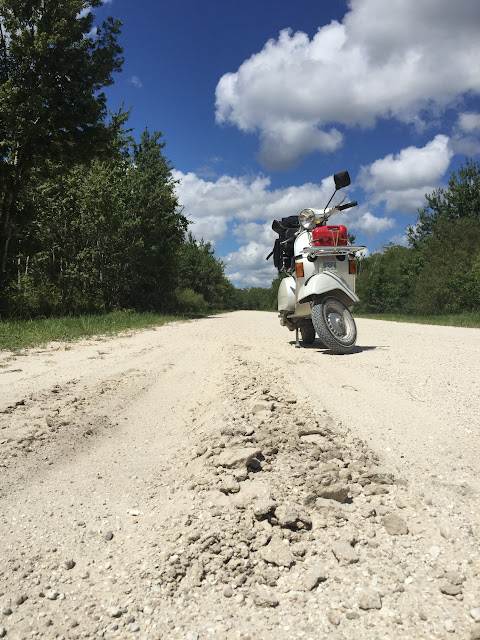 Four wheels better than two. I had seen a sign in the village from the Seminole Tribal Police kindly asking that ATVs be kept off the roadway. With progress come prohibitions. 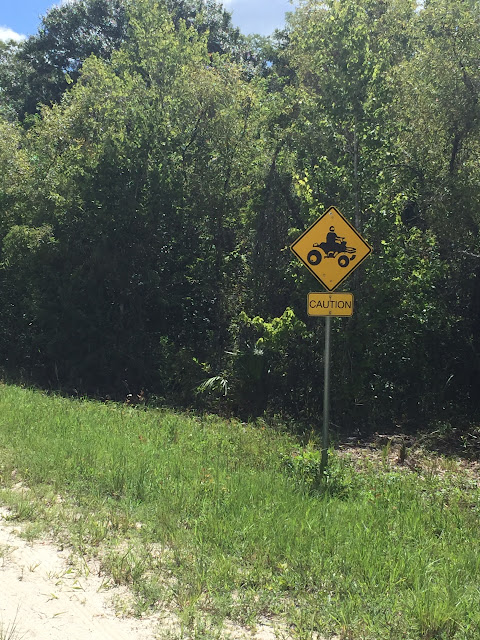 Finally as I was leaving the wilderness I met some traffic. His wake was blown away from me by the wind. My lucky day. 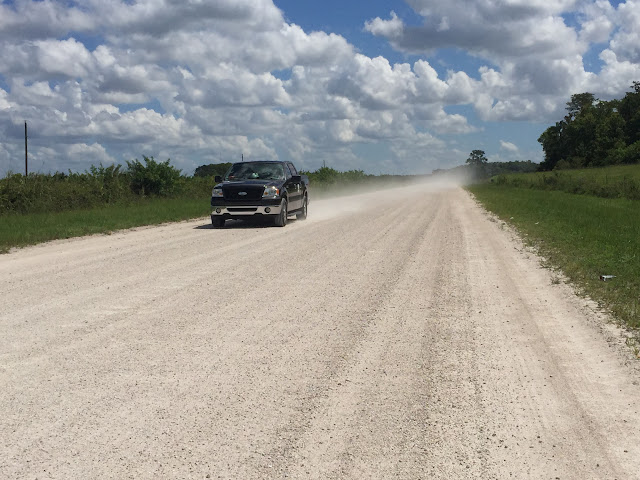 In case there were any doubt which way to turn the safari folks put up a sign directing visitors back to the Seminole Village and from there the main road south, Snake Road, takes you to the Miccosukee reservation and their gas station at Interstate 75. 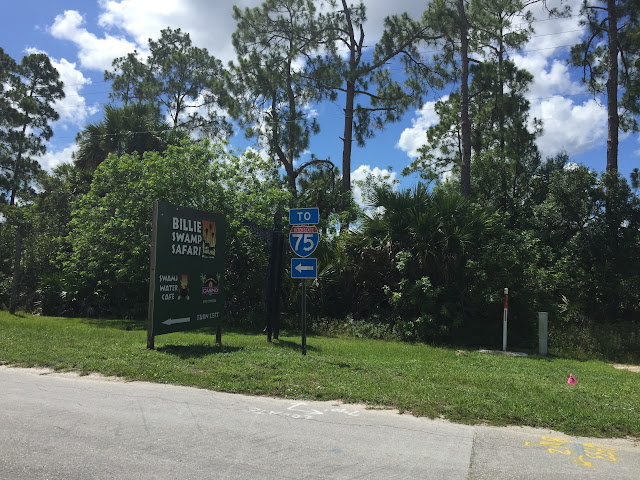 I paused at the Seminole School baseball diamond in the shade to check my map. It was clear I had no choice but to head back to Huff Bridge Road and thus back to Highway 27, Krome Avenue and so on back to the Keys. 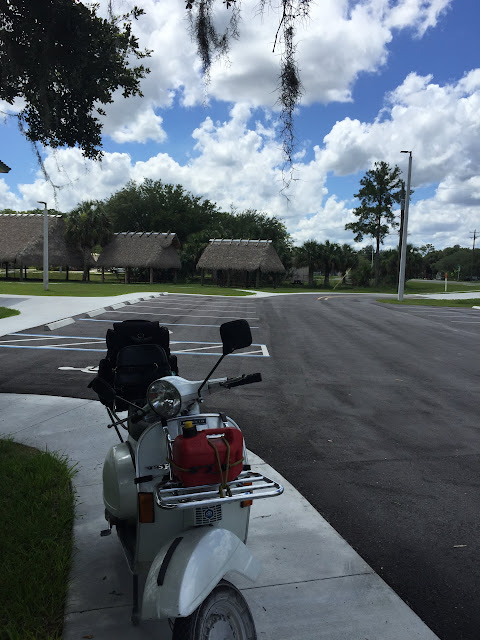 I started out around noon stopping to take a picture of the bridge in the middle of the village. It's name reminded me of the late Tony Hillerman novels set in the Navajo reservation where clans are a big thing. 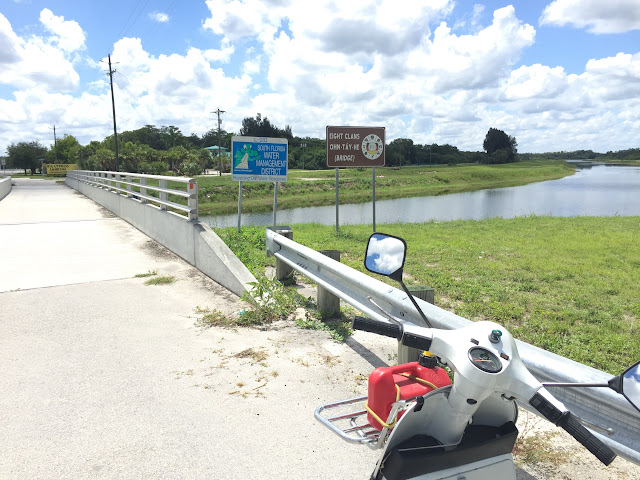 I was about four hours away from another engine seize. Sigh.