Sculpture Key West is in trouble. And why wouldn't it be when the Arts are just one element of our former prosperous life going down the drain of economic contraction? 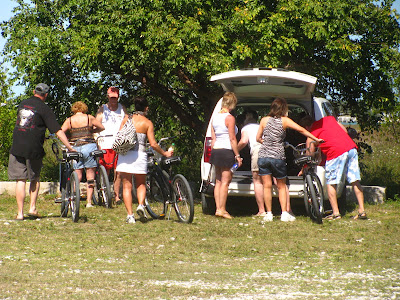 The parking lot at Fort Zachary Taylor was lined with small campers from Quebec, the annual winter migration of French speakers to our island, now with their loonies worth more than the dollar and thus empowered they can spend all day in the comfortable bum-free zone of the state park. Indigenous Park used to be their hang out but these are prosperous days for citizens of a country with well regulated banks, a housing bubble and energy to sell abroad. Oh and no health insurance worries either. No medical bankruptcies in Canada and you know this lot has their provincial health cards with them so Canada pays our outrageous health care costs should a Canadian fall ill or injured while in the US. 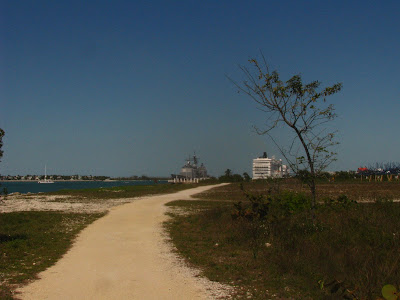 Down here in the land of the free with unemployment at Depression era levels, millions on food stamps, millions more off the assistance rolls altogether and tens of millions with no access to health care, it happens that the Key West Symphony has gone bust and has left musicians with unpaid wages. The number of exhibits at the annual Sculpture key West display is down to seventeen from a high a few years ago in the mid 50s according to the Key West Citizen. The open space shown above used to be littered with artworks. The views across key West Harbor are nice though and I've peppered a few through this essay owing to the dearth of Art. 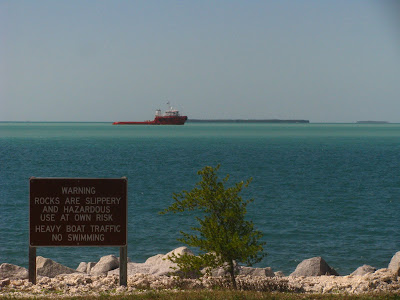 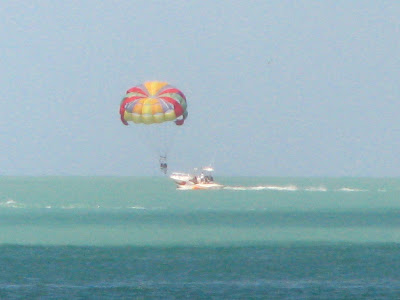 The Fort is a splendid viewing spot. However I had no time to visit as I was going to see True Grit at the Tropic after my dog walk in the park. I'm sorry to say the Coen brothers' version of the classic John Wayne version far outshines the original. Jeff Bridges is totally excellent as the marshal and the Coen brothers' script struck me as flawless. I spent a delightful one hour and fifty minutes at a movie I expected not to enjoy as I am not a Coen brothers fan. 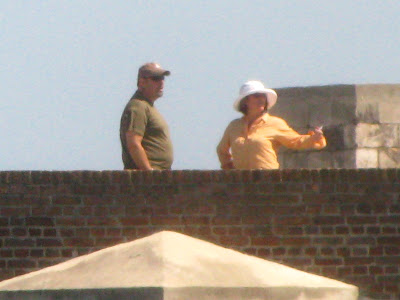 On to the static art of the afternoon. 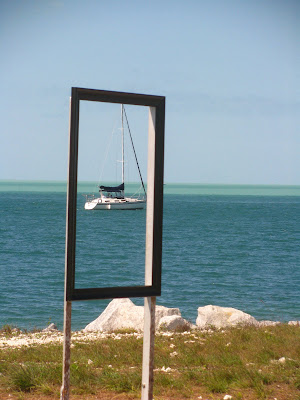 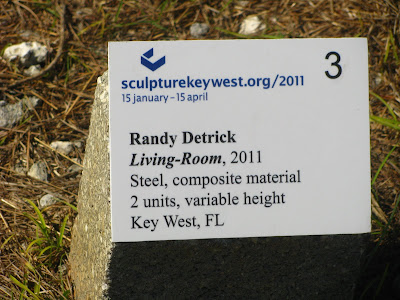 This artist is a local apparently. He made it through the rigorous jury selection process and apparently some of the decline of the exhibit is blamed on the strenuous efforts to keep local artists out for fear they might in some manner no explained "lower the tone." We are supposed to see more locals next year, if this fading show even actually returns, which is something I am starting to doubt. 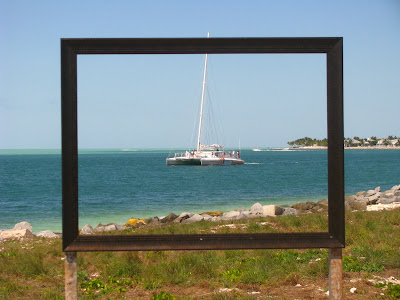 I rather liked the contrast of the tanbark foresail on this traditional cruiser spanking along in a strong north breeze across the turquoise harbor waters. 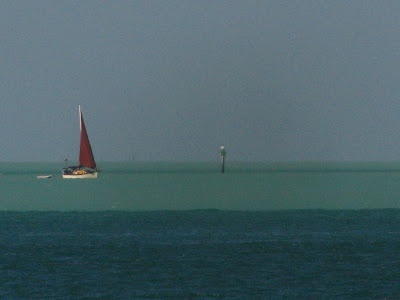 We were not alone as Cheyenne and I strolled the grounds. Tourists I think, with their neat clothes, trim white socks and not a food stain between them. 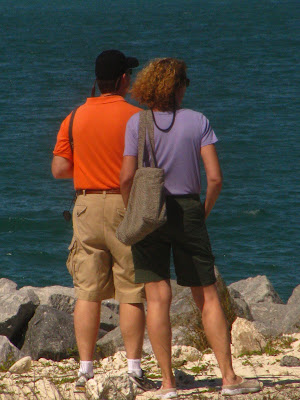 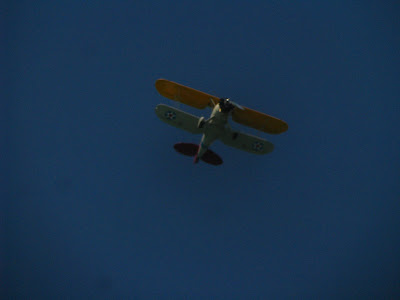 This next exhibit was spinning like a propeller. It came all the way from Virginia they say. 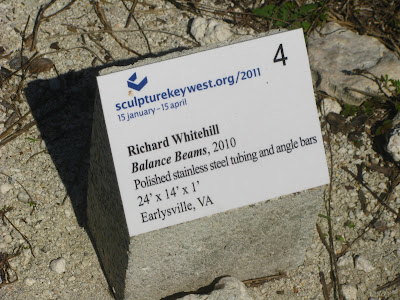 It's hard to imagine how awful Key West based entries must have been to have been booted out by a length of metal spinning on a metal pole. 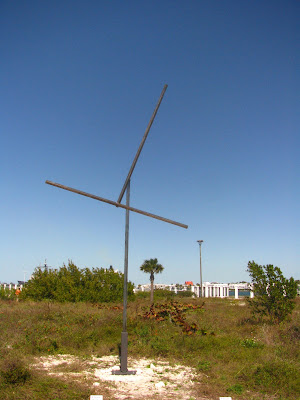 I offered Cheyenne an opportunity to go wading at the formerly nude beach tucked away next to the Outer Mole. Instead the furry whore when hunting for their lunch. They said they lived in key West though how they could be nude in the chill north breeze I do not know. They are probably from Minnesota, them and their cute French accents. 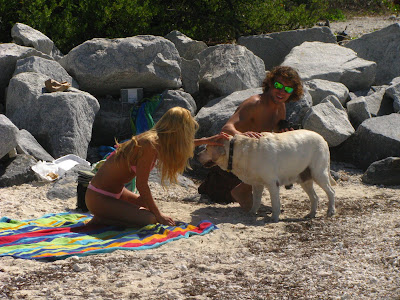 Er, okay. What is it? An ostrich in such a vast spacious nesty sort of place? Surely they mean "Birds nesting". 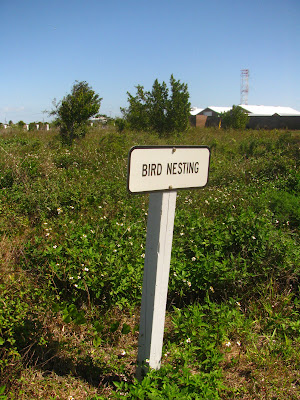 Mirrors on the horizon. 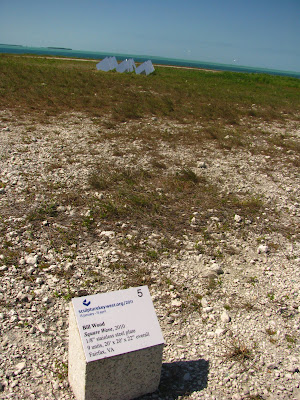 This is reportedly Square Wave from Fairfax Virginia, which, as it is on the western or inland side of the nation's capital makes it a noted authority no doubt on wave formation. I thought I looked rather swishy reflected in the wave, my hips rather more gay and flexible than might be the case in real life. 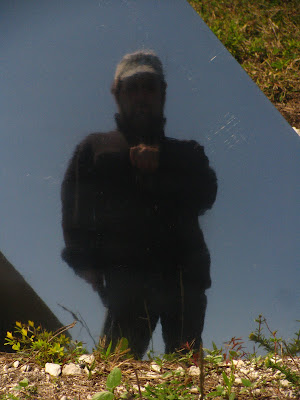 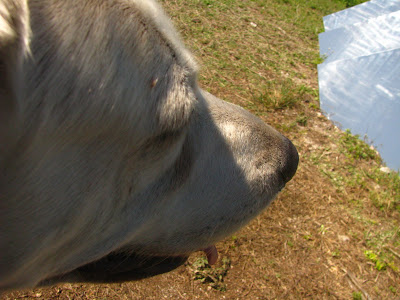 A rather lonely wave, square or otherwise in a sea of empty grass. 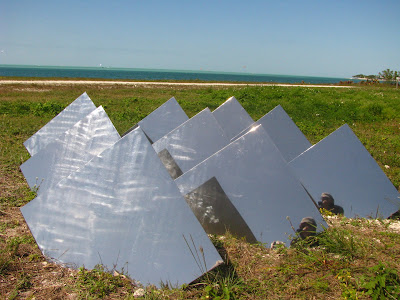 This next one got a thumbs up in the paper. 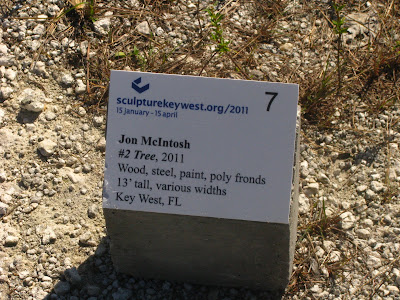 A local effort. Rather like an out sized souvenir pen from CVS. 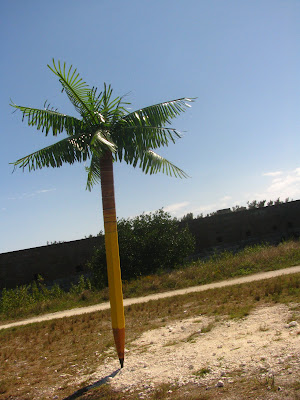 The irritation felt about this past couple of years' exhibitions has been over the fact that the display has been spread over three locations, the West Martello Tower and the Key West Botanical Garden on Stock island (whence comes tomorrow's essay). The organizer announced in a letter to the paper that the reason for the change was that the park management was unfriendly and the Civil War reenactors want more room and so on and so forth. So they spread the exhibits out at a time when the rest of the planet noticed money and credit were drying up everywhere and Bernie Madoff wiped out most South Florida charitable efforts. 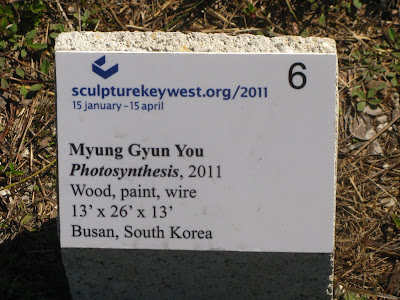 This year's Big Effort came from half way round the world. 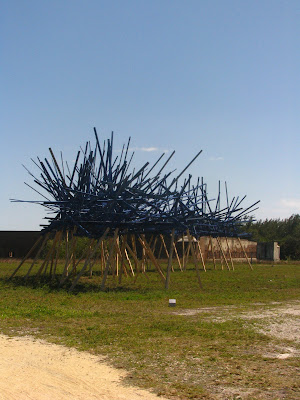 I rather wondered if the noisy people who hold sway over the Arts in little Key West weren't miffed that the sculptures weren't drawing too much attention to the lowly state park and wanted a piece of the action. In getting it they seem to have sounded the death knell on this stressed out piece of fun that is Sculpture Key West. 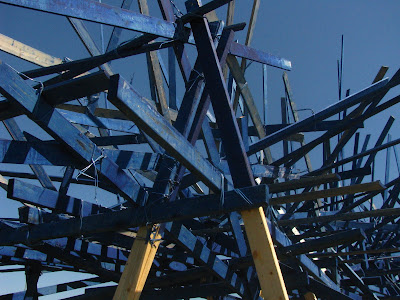 Sculpture Key West has been good for the state park in light of the recent fracas over proposals to murder the casuarina trees near the beach. That idea got rolled back amid horrid anger citywide, and now the sculptures, a highlight of winter, are fading. They used to have concerts in the park too but the Chorale last year preferred the sterility of an indoor Christmas Concert at Tennessee Williams, and so it goes. Thank God for the Korean Caterpillar else there would have been precious little to fill the void. 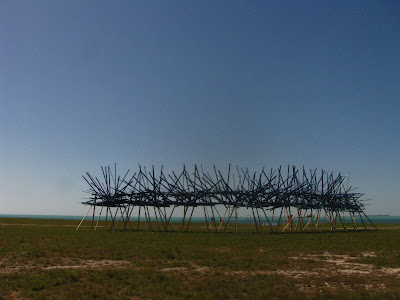 The Florida Keys in large measure live a charmed life compared to places Up North. When people fall off the employment rolls here they simply disappear Up North to eke out a life with their families. Until our new robber baron Governor took office Florida's state budget wasn't in the awful shape we read about in other large states like California, Illinois and new Jersey. We can only hope the true conservatives in Tallahassee hold the line as they have indicated they intend to on proposed crazy ass tax cuts, but in any event Key West is doing okay in the midst of the world economic meltdown (known as a recovery to the White House). 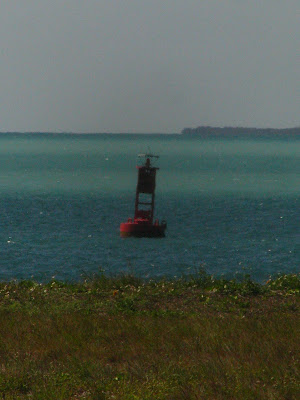 We float along on a cloud of tourist income and good weather and even though the demographic is getting markedly older (and testier) we are lucky to be on the edge of the meltdown Up North. 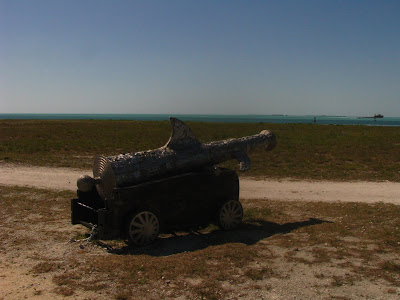 Still, people should guard their treasures with greater concern and awareness, because if they don't what Arts exist here will be washed away. If organizers can't get their shit together this exhibition will fade just like the symphony has, just as art galleries have up and down the city streets. 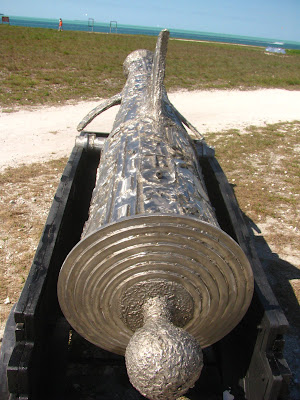 That would be a shame. 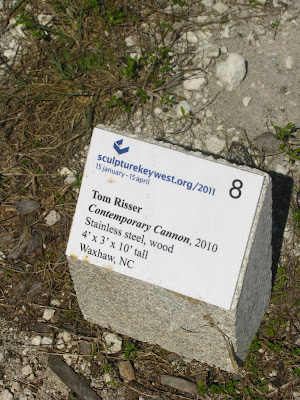 I parked Cheyenne in the shade on Simonton Street, fed the meter and walked to the Tropic. True Grit was showing in the new Peggy Dow theater and very comfortable it was too. As we waited for the lights to go down a couple of the older demographic snowbirds were discussing their impending death. "I can give $600,000 to the kids tax free...?" one querulous voice asked loudly. "Yes,' came the reply. "The other one point four million you get taxed on even if it's in the trust," replied a younger voice. They rattled on for a while discussing inheritance tax rates and trusts. One younger voice (an inheritor perhaps?) grumbled about the reversion to former tax rates and iniquitous death taxes and so forth. All I could think was, we should all have such problems. 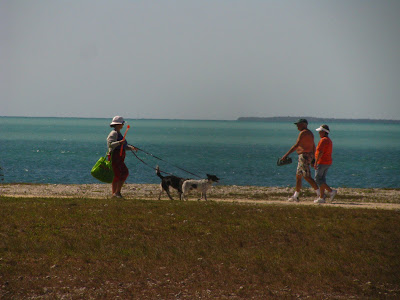 But I'm lucky, with no children to worry about, a secure job, I think, health benefits and time enough to take a sunny February walk to enjoy what I hope is not a last lovely art exhibit allowed to fade away and die like an abundant inheritance through lack of care and attention.

Posted by Conchscooter at 12:01 AM 13 comments: Links to this post