Armistice Day is commemorated every year on November 11 to mark the armistice signed between the Allies of World War I and Germany at Compiègne, France. 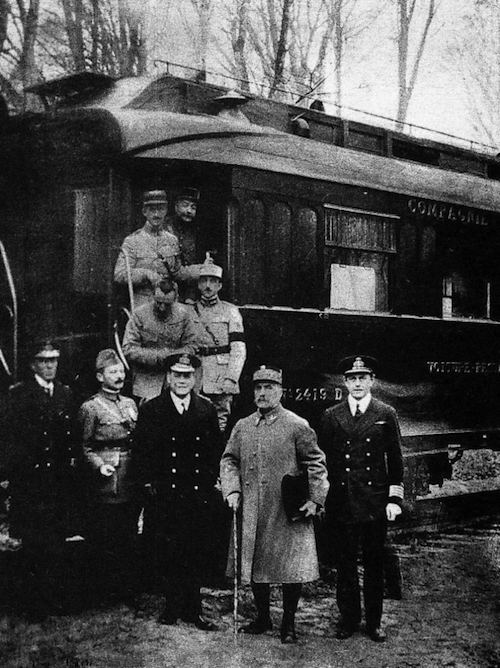 The Armistice was for the cessation of hostilities on the Western Front of World War I, which took effect at eleven o'clock in the morning—the "eleventh hour of the eleventh day of the eleventh month" of 1918. The date was declared a national holiday in many allied nations, and coincides with Remembrance Day and Veterans Day, public holidays.
History
The first Armistice Day was held at Buckingham Palace, commencing with King George V hosting a "Banquet in Honour of the President of the French Republic" during the evening hours of 10 November 1919. The first official Armistice Day events were subsequently held in the grounds of Buckingham Palace on the morning of 11 November 1919. This would set the trend for a day of Remembrance for decades to come.

In 1919, South African Sir Percy Fitzpatrick proposed a two-minute silence to Lord Milner. This had been a daily practice in Cape Town from April 1918 onward, since being proposed by Sir Harry Hands, and within weeks it had spread through the British Commonwealth after a Reuters correspondent cabled a description of this daily ritual to London. People observe a one or more commonly a two-minute moment of silence at 11:00 a.m. local time. It is a sign of respect for, in the first minute, the roughly 20 million people who died in the war, and in the second minute dedicated to the living left behind, generally understood to be wives, children and families left behind but deeply affected by the conflict.

Similar ceremonies developed in other countries during the inter-war period. In South Africa, for example, the Memorable Order of Tin Hats had by the late 1920s developed a ceremony whereby the toast of "Fallen Comrades" was observed not only in silence but darkness, all except for the "Light of Remembrance", with the ceremony ending with the Order’s anthem "Old Soldiers Never Die". In Australia, the South Australian State Branch of the Returned Sailors & Soldiers' Imperial League of Australia developed during the interwar period a simple ceremony of silence for departed comrades at 9 p.m., presumably to coincide with the traditional 11:00 a.m. time for Armistice ceremonies taking place in Europe due to the ten-hour time difference between Eastern Australia and Europe. Veterans in New Zealand have used silence to pay homage to departed comrades in general at veteran functions, as the toast of "Fallen" or "Absent Comrades". Levin, New Zealand
In Britain, beginning in 1939, the two-minute silence was moved to the Sunday nearest to 11 November in order not to interfere with wartime production should 11 November fall on a weekday.
After the end of World War II, most member states of the Commonwealth of Nations, like United Kingdom and (as Canada in 1931), moved most Armistice Day events to the nearest Sunday and officially began to commemorate both World Wars. They adopted the name Remembrance Day or Remembrance Sunday, using poppies found across the fields of conflict of  World War One. Other countries also changed the name of the holiday just prior to or after World War II, to honor veterans of that and subsequent conflicts.The United States chose All Veterans Day, later shortened to 'Veterans Day', to explicitly honor military veterans, including those participating in other conflicts
Posted by Conchscooter at 12:00 AM 2 comments: