I have never been much of a fan of the power boat races in Key West but after last year's fatal wreck and the grieving widow's lawsuit I am less enamored than ever of this lame excuse to show off one's penis extender. I mean, if you choose to take part in a massively expensive, inordinately pointless dangerous sport, and you die while doing it, your heirs should have the good grace to go home and lick their self inflicted wounds in private. But no, this is America where self reliance modesty and good manners have been sold down the river of avarice so now we have another chance to watch these bluebottles racing dangerously up and down the Key West Harbor.

Enjoy if you can. But remember, if anything goes wrong this year, we have no one to blame but ourselves. Not the participants, never in life should we hold the "sportsmen" who power these preposterous excuses for boats, never could we hold them accountable for their own folly. That would be unAmerican.

Posted with Blogsy
Posted by Conchscooter at 7:16 PM 2 comments:

Schooner Wharf Bar on Key West's waterfront like to claim the title of the last little piece of old Key West, but it seems to me, this piece of waterfront could more properly lay claim to representing the way Key West used to be. It's called Safe Harbor and it is a body of water that consists of commercial wharves, docks and industrial activity the like of which Key West hasn't seen in decades.

This is a boating community, and there is commercial activity here but that doesn't mean people don't live here as well, and. And some earn a living or practice a craft on land here among all these boats.

There is a fascination with boats and the water that transcends usefulness. People find the waterfront to be endlessly fascinating and perhaps soothing. As a former sailor, with Asperger's, I find he constant rattling of rigging on hollow aluminum tubes maddening. I used to prowl my deck obsessively during high winds attempting to tie off any errant halyard to stop the end,es banging. Sometimes I'd bungee my neighbors' lines as well such was the racket.

Hogfish restaurant is a popular eatery tucked away among te boats. This is in fact the main reason boatless people come to Safe Harbor.

At little piece of old Key West? Maybe. The fish and chips aren't bad but the beer selection is weak of you lie interesting craft beers. But the atmosphere makes up,for that I'm sure. It must, this place is popular.

This is downtown Safe Harbor whose location is accurately mapped on the post out front.

If you can tear yourself away from the fish fillets and Bud "Lite" there is a graveled alleyway jutting out into the water from behind Hogfish. Cheyenne loves to explore it.

She ignored the killer cat out for a walk. I was advised she has a vicious temper but saw no sign of it.

Artists in all media hang out here in these useful little warehouse compartments, building whatever comes to mind.

I could never own a custom painted motorcycle like this. I put too much wear and tear on my Bonneville to spend the time or money doing this to it:

Everywhere you look around here there is something to see, be it ever so inexplicable.

This guy is preparing to head north to Pensacola but he wasn't keen to get his picture taken as his oat wasn't shipshape. Not the point I told him. Peoplewantto see you living the dream. Am I right?

Pleasure boats mix it up with their traditional antagonists here, the commercial boats. Professionals for some reason dislike amateurs as though a human who boats for fun is beneath contempt. I don't know why but some sort of machismo is probably at the base of the antagonism.

And back on this side of the channel the ultimate in pleasure craft, a wooden river boat type of machine gets the refurbishment it deserves. It put me in mind of the movie Fitzcarraldo.

I took this picture with the caption in mind, considering the feeble state of my two banana trees at this early stage in their lives: banana envy. Very Freudian I'm sure.

Cheyenne causes me envy sometimes when women just walk up to her and start petting her. I can look as baleful as you like and I never get the attention she does.

They build stuff, like I said earlier, in these warehouse units, woodworkers included.

I wandered over to Fishbusterz fish market later but the dockside restaurant that I quite liked is no more.

At the beginning of this essay I mentioned the soothing effect of open water views.

According to the literature the basin was carved out of the water in the 1950s at a time when shrimp boats were based in Key West Bight in Key West. Land prices started to go up in the eighties and the Shrimp boats moved and found a new home here.

Across the water the power plant operated by Keys Energy, the local public utility, sits and waits for a massive power outage. They have a couple of huge diesel generators there and I'm told they can run electrical needs for the lower Keys at eighty percent capacity for two weeks on the fuel stored at Stock Island. It's the sort of emergency back up they could use in New Jersey right now.

On land there is a whole world of activity, less dramatic than the power station and it's preparation for disaster.

Don't get used to all this rustic beauty because development plans are in the works to build a luxury upscale boating facility just across the harbor. Imagine how contained that sort of gentrification will be as the years move forward. This sort of cheap rustic old style living will not be tolerated for long. Money talks remember...There are also moves afoot to try to incorporate Stock Island into the city of Key West, presumably to benefit the wealthy, not the restaurant workers and handy people who live in the trailers on Stock Island. I guess we should enjoy. His while we can and hope for the best. 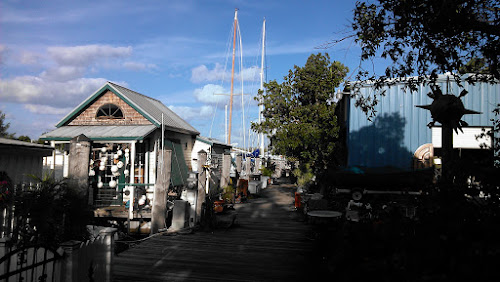 Walking Cheyenne Is always a delight and around here because there is much to see and smell. I'm not sure lobster traps smell as I would like stuff to smell but she is a dog. 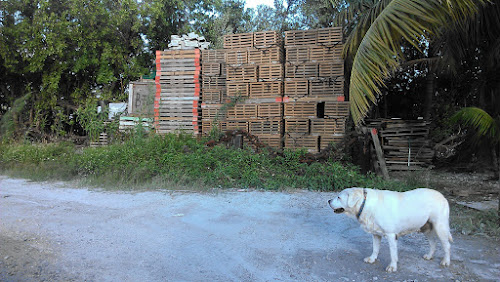 It's hard work and it takes it out of a dog. Who then needs to take a sort of swim. 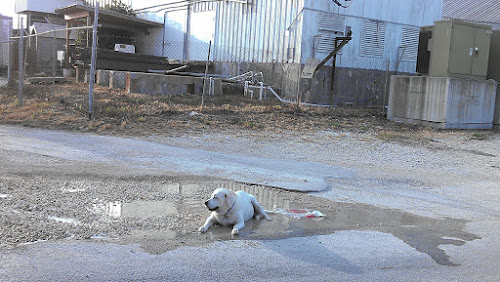 This is a close up picture at the end of Stock Island's Front Street which stops short at the power plant. Very impressive it is too. 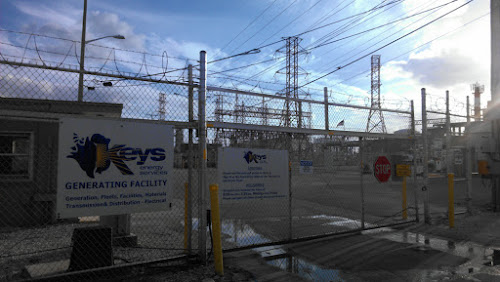 One more fine mural to admire. Murals are a popular form of expression in the Lower Keys. 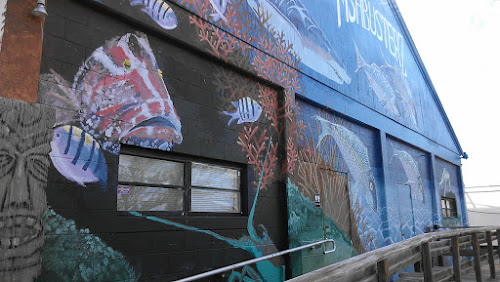 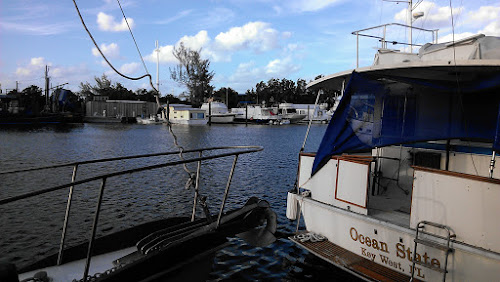 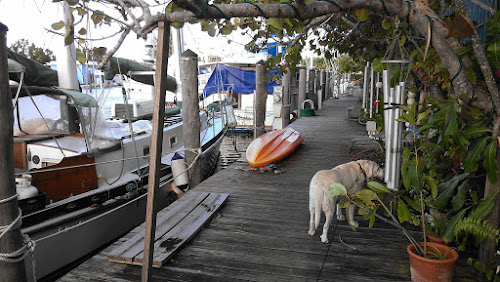 The last little piece of Old Key West? You decide.