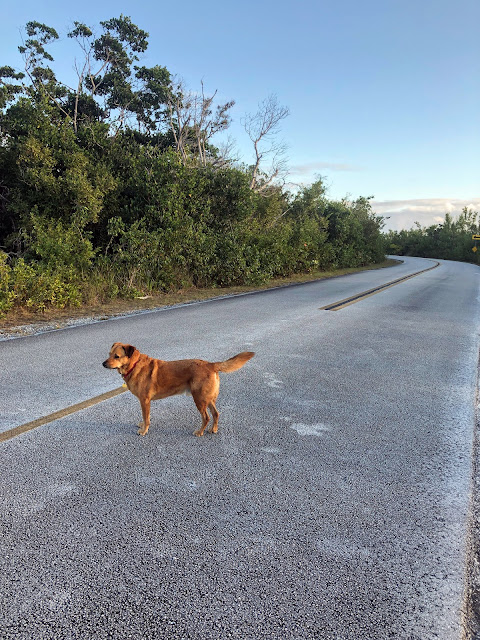 I was listening to a discussion about the life and art of Edith Wharton, the American novelist who lived a surprising life and produced some powerful works of fiction. I can't say I'm a fan though the lively discussion did provoke some interest and I expect I will be cranking up my Kindle on my phone to pile up one more book to read in a very backed up list. 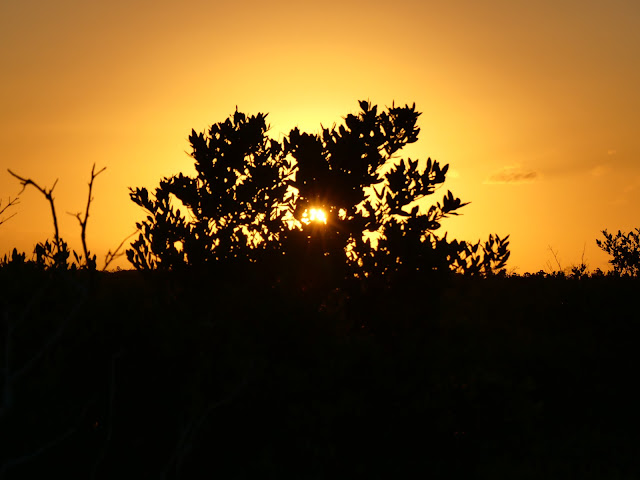 And then the Great Lives program started looking into Eric Blair, better known as George Orwell, a tubercular passionate political man who fought for his beliefs and died poor and alone. The suggestion on the show was the novel 1984 got a boost by the Cold War antagonisms that took his warning and made it a frontispiece for the Red Scare propaganda of the era. By then Orwell was dead. 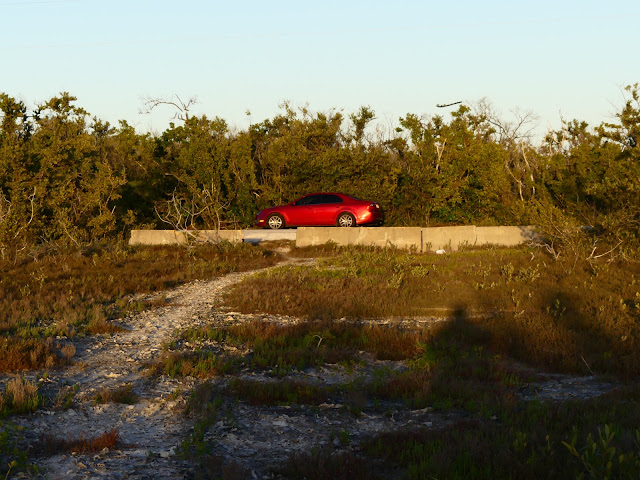 Rusty was running around, checking in on me  from time to time and ignoring my furrowed brows. I was concentrating hard on not falling as the ground was lumpy and  uneven and tusks of grass tugged at my cane. But I couldn't get the contrasting life stories out of my head. I live so far away in time and space from the concerns of those famous people. I live in a flat world of scrubby bushes, featureless and silent, with only an occasional distant weird structure rising up, somebody's idea of a hurricane proof box as ugly as may be necessary. Yet I felt connected in some way to Wharton and Orwell. 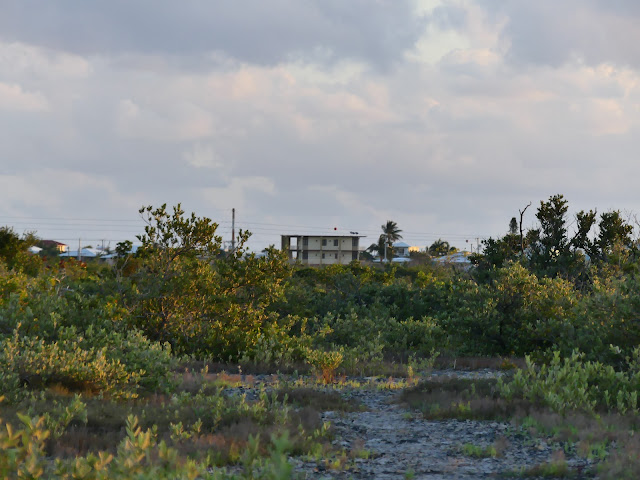 As I listened to the Radio Four podcast I found myself answering questions that have been puzzling me for years, and indeed the answers I found came out of the accident, that turning point in my life. I have found myself wrestling with the before and after lives that I have lived: before August 31st, and now after that infamous date. Before the accident I knew I wasn't living the life I wanted to live, I was living my life waiting for the life I wanted to live and I was well aware of it. Its very odd to me how nothing else has changed yet even as I live the same life, work,sleep, gym, and dog walks, I find myself agreeably satisfied with the life, the daily dreary routines. I think I may be verging on happiness. 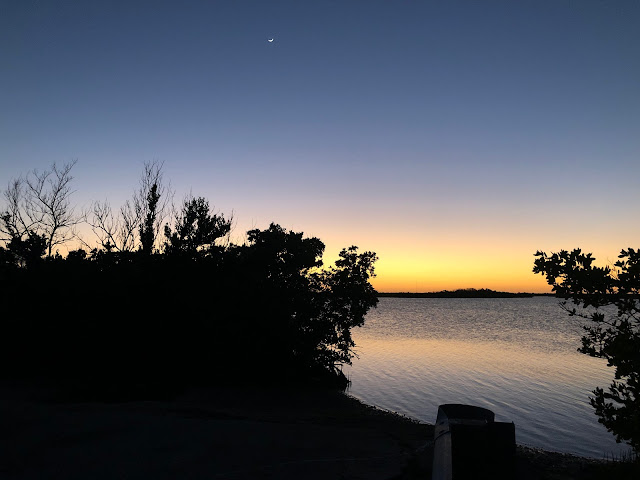 I am tired of the daily struggle to unstiffen my legs every time I stand up, the time it takes me to get in and out of the car, the massive obstacles posed by flights of stairs, it's all part of the limitations I am working to overcome, and which I shall overcome given time. But at the same time the dreary time consuming restrictions I live within have taught me patience on an epic scale. Rusty plays a part in that too. At first he used to hover round me at home or out walking but as time has passed the dog which you could never credit with the intelligence of a human, has started treating me in the old way, walking further afield, leaving me out of sight for longer, not worrying about my ability to cope.When I was held up by water across the path he accepted I was stuck, and he came back, tail flying high and we walked in another direction. His empathy astonishes me. 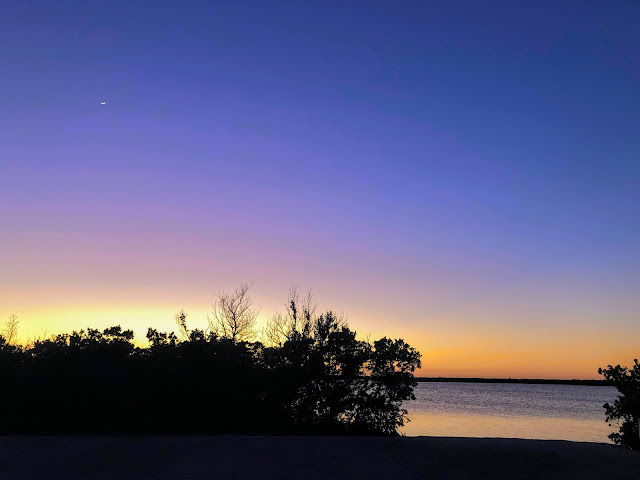 I picture Orwell in his hut on the Scottish island of Jura writing feverishly in cold damp conditions at the house called Barnhill. In Google maps it looks idyllic but for the tubercular writer facing his imminent death it was anything but. Nevertheless he finished 1984 and the world of words has been transformed by his controversial effort. Edith Wharton by contrast managed her money, lived a full life especially after she divorced her husband, a man who inherited mental health problems, and of course she created controversy by being strong, wealthy and independent. 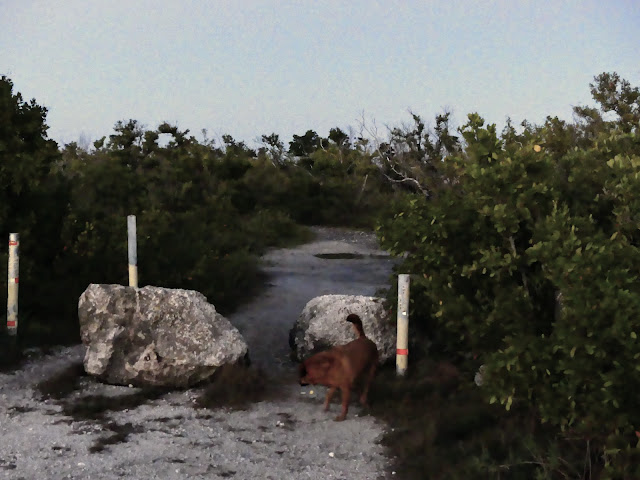 As I listened to their stories, with which I was somewhat familiar, I found myself acknowledging the great good fortune of a man who is living precisely where he is happy living, in time and space. Orwell was doing what he needed to do, even as the life drained out of him, Wharton allowed no one to stop her living as she wished. And if you think her times were old fashioned check out how hard it is for men in America today to appreciate strong women. Or socialists like Orwell. We line our lives with fear and prejudice. And I feel that as much in myself as anyone and as I look back at these revolutionaries I don't see much to fear from them, their example or their philosophies. Sometimes we allow ourselves too much indignation and should instead trust that lie will take care of the details. 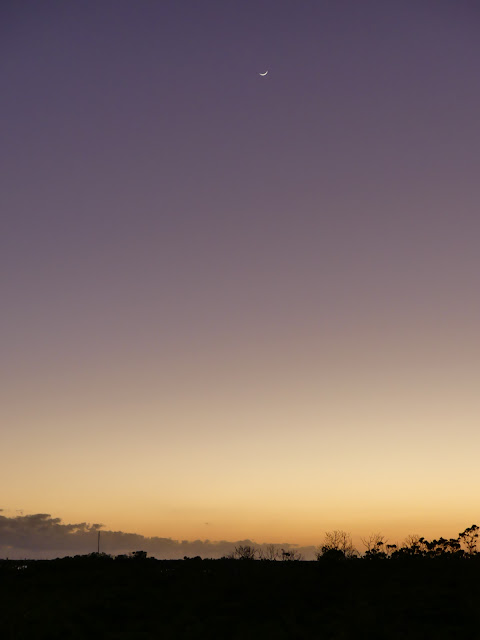 But the trick I have discovered is a bit like dieting ( which is a fad I don't participate in,) inasmuch as you can end up beating yourself up for one failure and promptly give up. Finding the path to overcoming the fear of expectations is a daily struggle and requires you to forgive failures as you go, and that's hard. I find difficult to articulate how spending two months in bed has brought me to a new realization of how to live my  life but in some miraculous way it has. It becomes embarrassing when people offer condolences on my misfortune and I, like a tool, try to explain my renewed appreciation for life instead of letting that sleeping dog lie. Well, I've learned that lesson. I'll mention the phenomenon here but not in person. Good came from disaster. 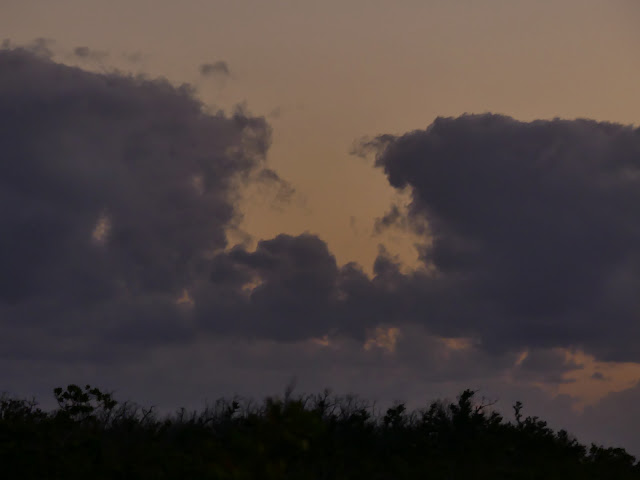 I stood on Niles Channel Road  alone with Rusty and watched the sun set. I  dislike sunset pictures as they are too easy to take for effect and I can't figure out what story they tell. I end up sticking silhouettes in front to make them more interesting. These I took deliberately as I knew thoughts were swirling in my head and for those too sensible to pay attention to the words some sunset pictures might be a suitable balm. In case they look too idyllic (that word again) be aware of the squadrons of no-see-'ums launching raids on my bare legs and arms as I stood lost in thought. Maybe the sonorous tones coming from my telephone link to the BBC attracted them. 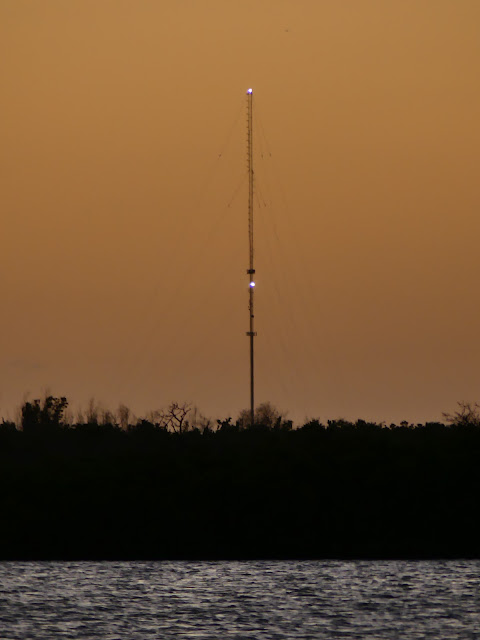 The  lives I was listening to were both over in 30 minutes each, a compression startling in its brevity and here we are living day by day as though there is no end.  I would hate to have my 61 years summarized into 30 minutes but I doubt anyone will be doing that for me, and if I'm dead it will matter even less. So let us commit to seizing the day, not necessarily by doing big things but by being aware of the day as it flows by even and especially in the small things. It's the best I can offer as sunset approaches. 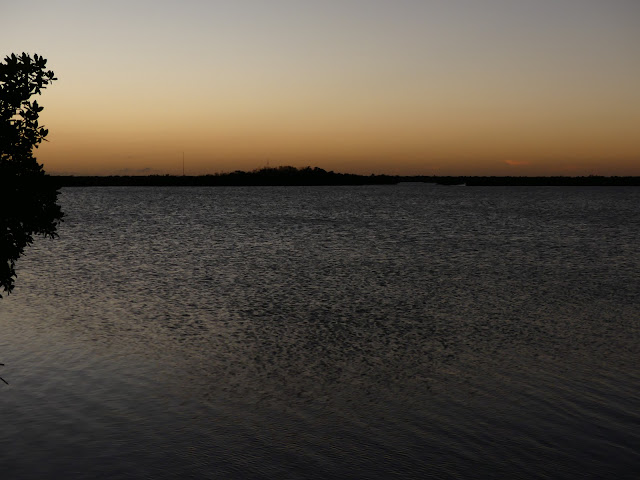 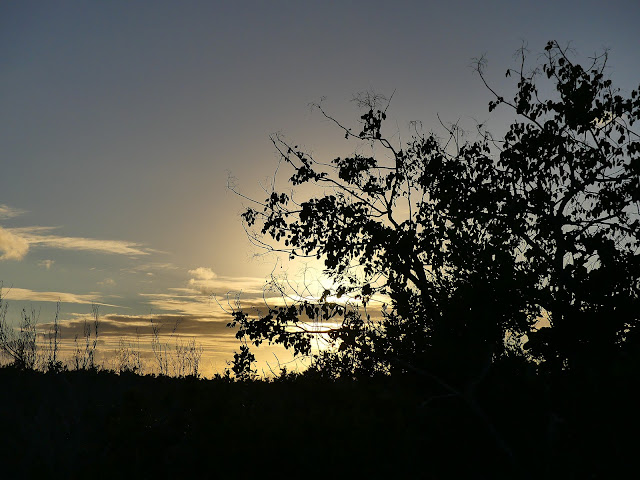 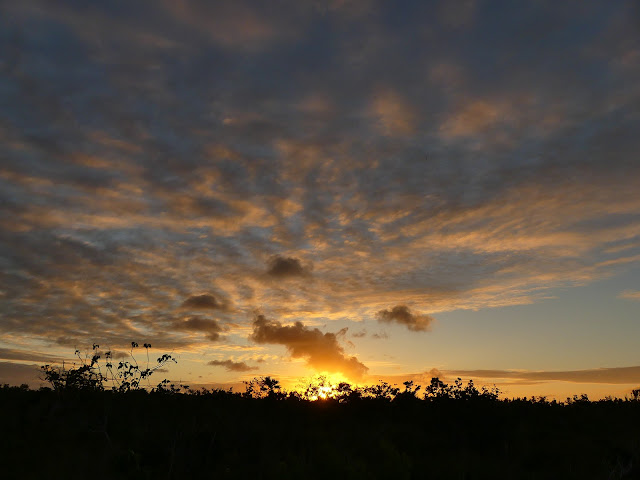 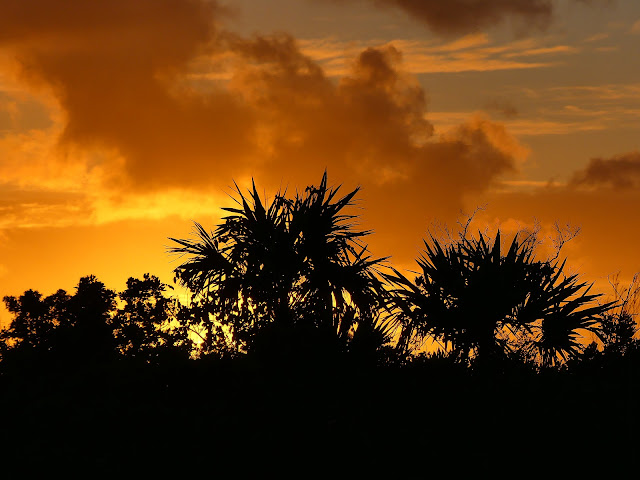 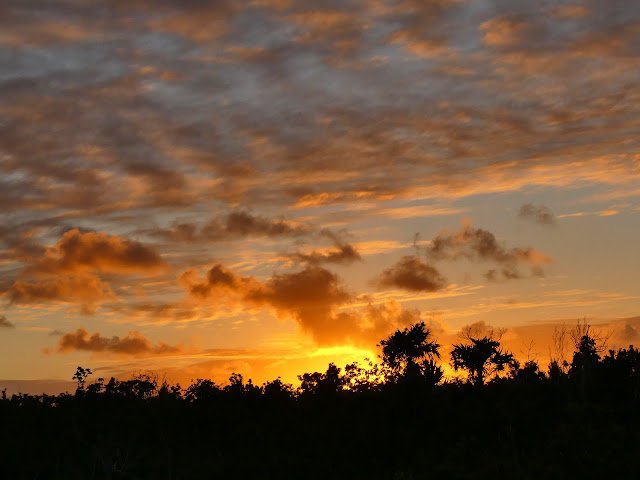