We lined up for the 7:30 ferry to Cedar Island, a two hour and  fifteen minute ride that costs $15  for a car one way, and from the deck I got a last glimpse of Ocracoke from the deck. The other ferry goes to Swan Quarter the county seat of Hyde County,  a slightly longer ride to the mainland. That ferry left just before ours but you are supposed to be in line 30 minutes before your boat leaves the dock so we watched that one leave first. And then, after I fed Cheyenne her breakfast we boarded and promptly pulled out.  ﻿ 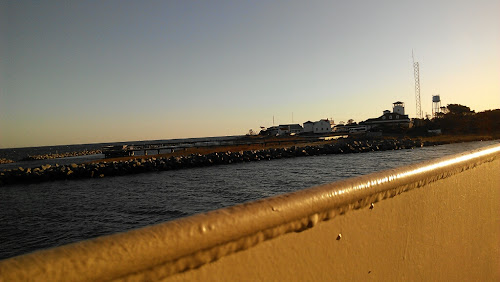 That Ocracoke is part of Hyde County and not Dare County like the other Outer Banks islands is a bone of contention. It was pointed out to me that Dare County (named for Virginia Dare the first English child born in North America) is wealthy while Hyde County is not, and what wealth there is comes from the inflated property prices of little Ocracoke. The village garners 75% percent of the revenue for Hyde County but the landmass is barely one percent of the county. Also there are only a few hundred voters while the mainland has 6,000 voters eager to get their hands on Ocracoke's revenues. The island has considered annexation to Dare County, incorporation as a city or Independence as it's own county but all efforts have failed. So far. 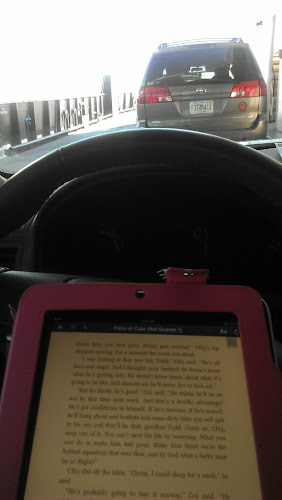 By the time we reached the mainland it was almost ten o'clock and we stopped in the woods on a stretch of desolate Highway 12 in Carteret County (Carteret was a wealthy colonial landowner and politician). Cheyenne went for a short walk looking a bit stiff but much improved since I had had to half carry her out of the house a few hours earlier. We determined to see a vet and make sure she was okay. She got a check up in Morehead City, an hour down the road and was pronounced healthy, given $200 worth of pills and made a great fuss of. We drove on for an hour to Wilmington, the largest coastal town in this part of the world. 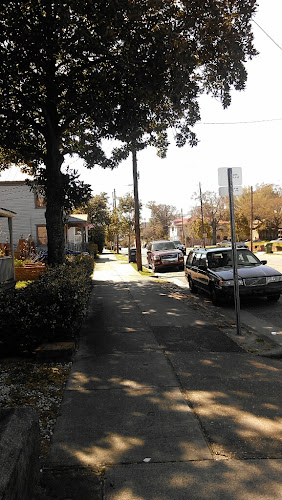 We had met a rather pleasant couple at Zillie's in Ocracoke,  who extolled the virtues of their hometown to us over glasses of wine and beer, and waxed quite lyrical. Natives of Oswego, New York they enjoyed high tech careers in Wilmington, a town they said aspired to challenge Charleston's reputation as a tourist magnet. But they added, laughing, Wilmington is unwilling to spend the money to build the infrastructure. Nevertheless we were curious and we found a place to eat (my wife did, searching online) that was the creation of a chef from Charleston's New Southern cuisine hub called Husk where the boast is, if it isn't from the South, they won't serve it. 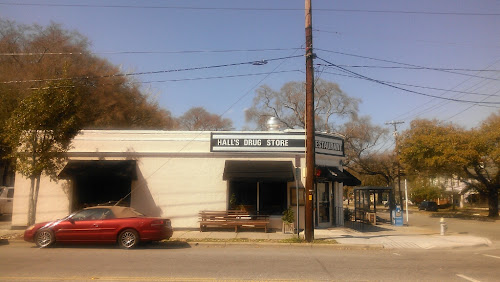 Rx  Restaurant is located in a former pharmacy and is not easy to find even if you know it is at 421 Castle Street in Wilmington. We passed it twice and had to call to get a description of the building...Their menu changes daily as one of the two owners is also the chef and an alum of the infamous Husk. 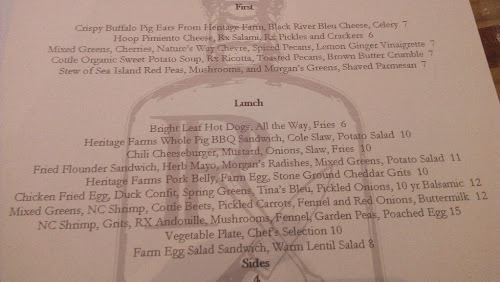 My wife looked at the menu, ordered a martini and invited the waitress to surprise her. She got a citrus martini that she enjoyed a great deal and was only charged five dollars for the trouble. The atmosphere was comfortable and shaded nicely on the  sunny afternoon. Lunch was served until 2:30 but we had arrived well before two so all was well. http://www.rxwilmington.com/ 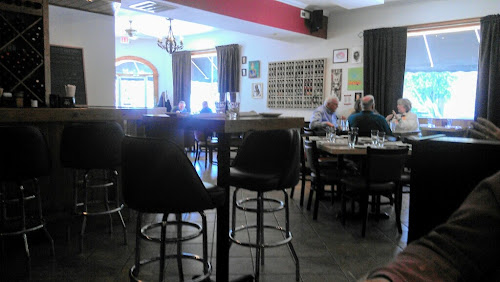 The walls serve as an art gallery for an eclectic display of artworks. If you look carefully in the picture below, to the left you will see a rather startling image of a man covered in orange flames. Immolation it was called and could hardly be described as appetizer.  But startling! 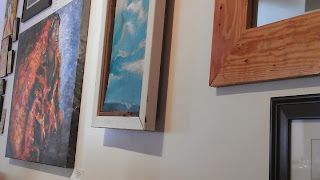 The Cottle sweet potato soup started things off, a thick cream with a dollop of ricotta and  pecans to keep things interesting. we wanted to share it so they gave us to separate bowls. It was more of a puree than a traditional soup but it was full of flavor and very smooth. 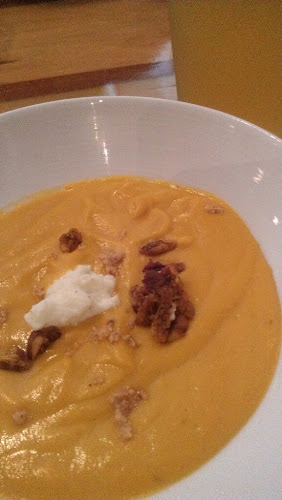 The next one got to me a bit and I think it was too rich for my stomach, but my wife dared me to order it so we did in fact try it. Crispy fried pigs' ears in buffalo wing sauce. I was revolted by the idea, accustomed as I am to giving pigs ears as treats to my dog, who loves them. But I cannot resist a dare and I found them to be flavored rather like pork bellies in commercial packets, found in  gas stations across the South. One plate could easily have served four and though an interesting experiment I found them indigestible later, requiring many bathroom stops on the way to Charleston. 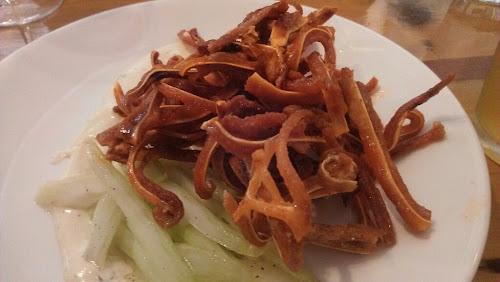 My main course was pork belly, a fatty pork steak kind of thing, butter soft and full of pork flavor on delicious grits and a perfectly fried solidly flavored non commercial egg on top (see that rich yellow yolk?). Breakfast for lunch as it were. 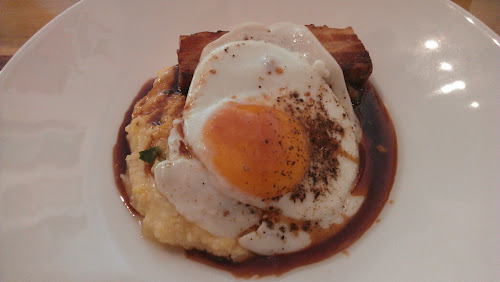 My wife has a fresh green salad featuring lightly pickled slices of onion and a chicken-fried egg, a crunchy addition to the salad which was tart and fresh and spicy.  We even went for dessert, with coffee as my beer and my wife's martini had taken their toll. Our Italian custard (panna cotta) and whipped cream came with a perky slice of chocolate covered bacon to complete the pork meal. It was a superb end to a delightful meal. 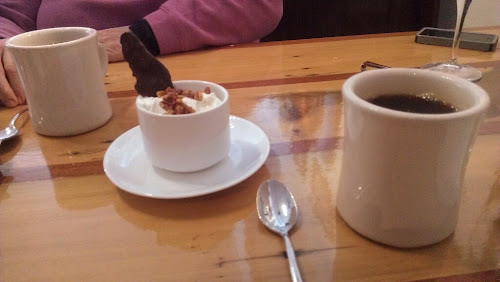 All that came to $60 plus tip and we rolled out and got on the road in fine fettle. Cheyenne was pain free and content but we decided against the tempting the fates and taking her for a walk in what appeared on slight acquaintance to be  delightful brick and shade  city. Our waitress said people come to Wilmington for the beaches so tourism plays its role here. I'd like to come back. For dinner perhaps... 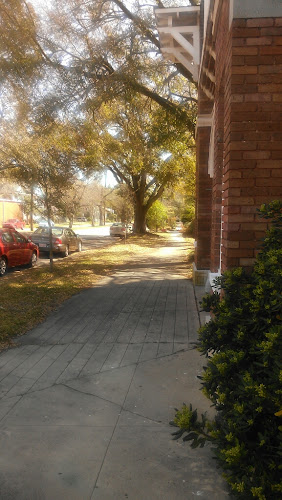 Cheyenne, restored to full active health went for a walk in a Charleston suburb while my wife caught up with some Trader Joe's shopping. Her dinner was served al fresco as she likes it, with her bowl on a shop rag to prevent it sliding around. We picnicked in our room that night on left over meats and cheeses from Zillie's on Ocracoke, too tired and still too full to venture for more rich food into this fabled city which we haven't visited in years. Another mandatory stop sometime in the future! 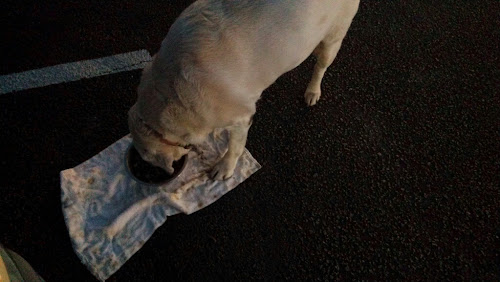 It was a tiresome drive south, an accident on I-95  near the Georgia stateline forced us onto the backroads which were starting to get thick with easter traffic and commuter traffic and it was slow and tedious and made us wish for the serenity of Ocracoke once again. 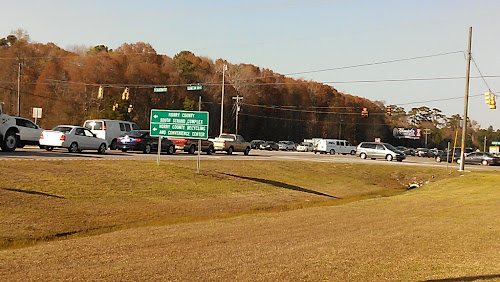 By the time we were south of Jacksonville my fleece was consigned to the trunk of the Fusion and shirt sleeves were the order of the day, at last.  Cheyenne gets tired of riding in the car but we try to alleviate her boredom as much as we can, though certainly she had spent enough time exercising her body and brain that she was pretty tired altogether by the time we got home. She slept for twenty four hours and made her space on our bed to rest properly. 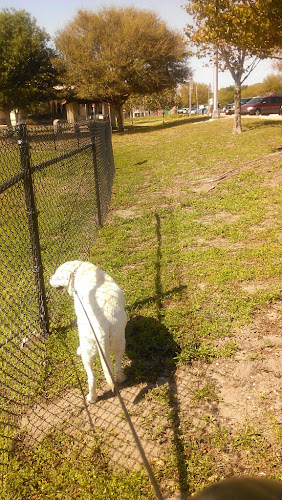 Soon enough she was ready to walk her old haunts and see what had been happening while she was gone. I did the same at work and found not much had changed in Key West. Business at the police department was still booming and without a second thought the headset was back on my head and I was telling the officers once gain to go hither and yon to keep order in the little Southernmost City. Small and southernmost yes, but not as diminutive as some places I know.