Early morning at Higgs Beach, the county owned property on the south shore of the city. 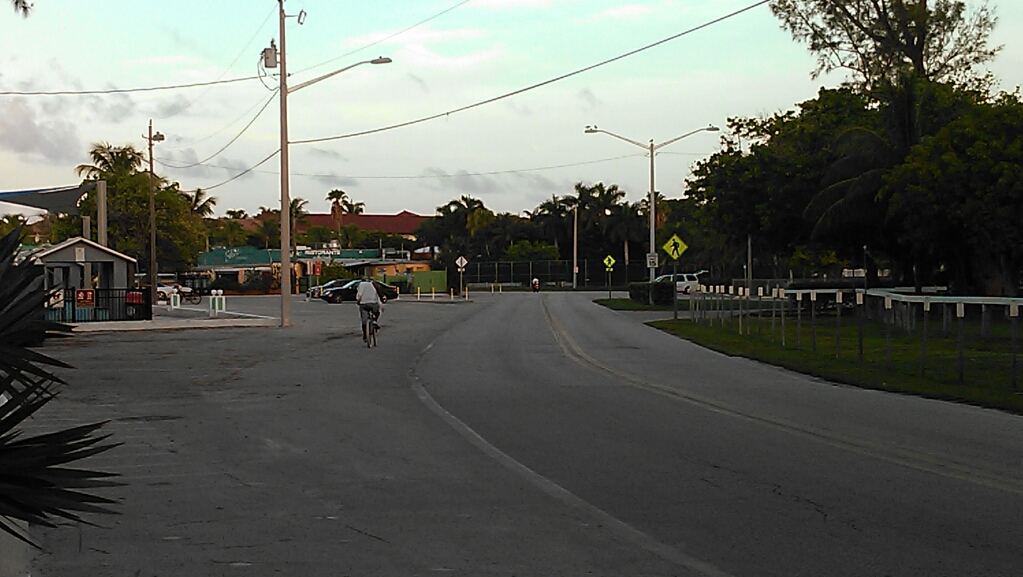 Higgs beach is a popular hang out. 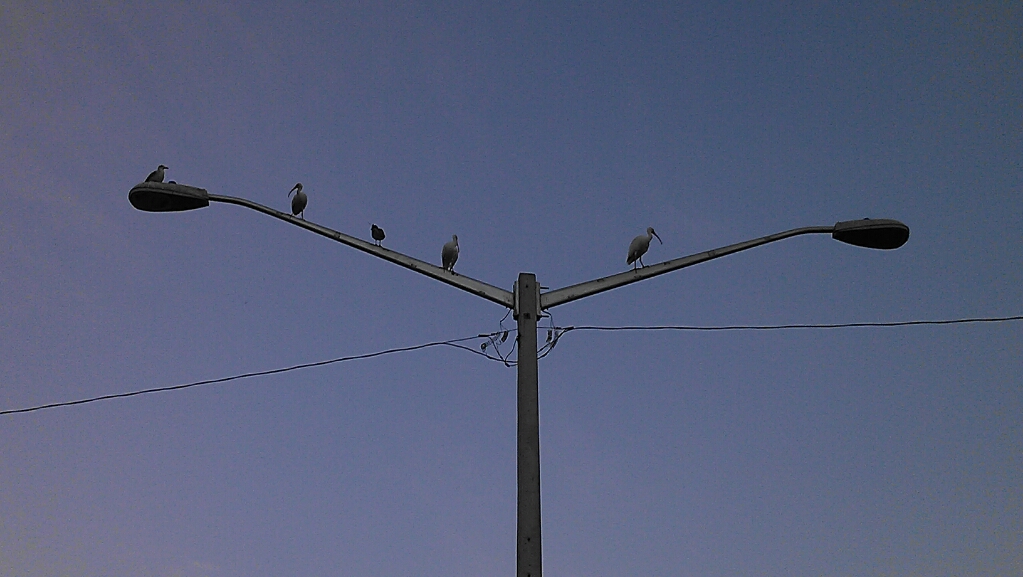 Local residentially challenged folk like to spend their days here, and though the beach is closed at eleven pm each day it is open to all during the day. Monroe County frequently has an off-duty deputy sheriff assigned to patrol the beach during the day. 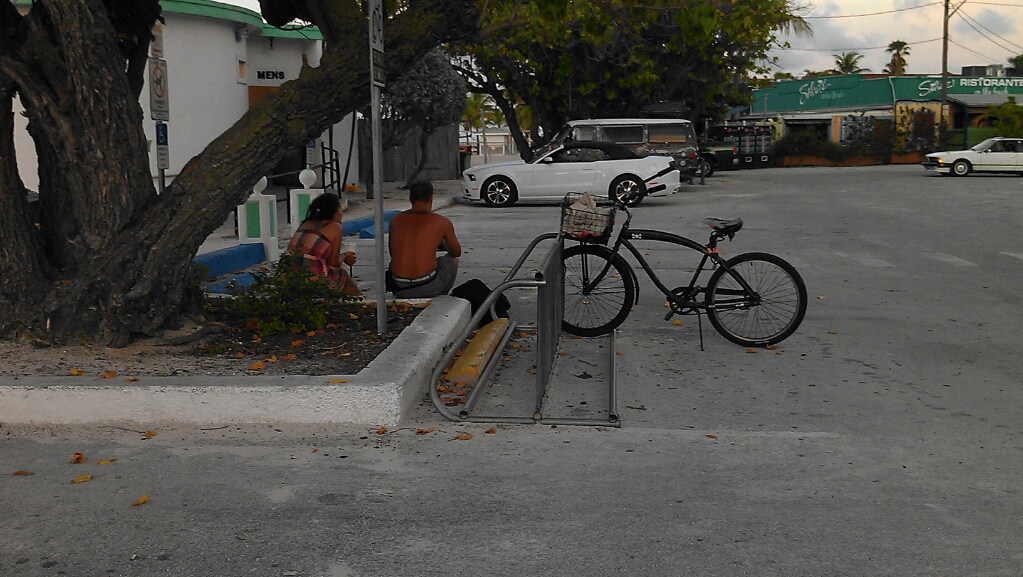 Sleeping by day is permitted and the restrooms are open which helps keep the place clean. There is a sign in the bathrooms reminding patrons that ablutions in the sinks are not allowed. The overnight homeless shelter on Stock Island two miles away has showers. 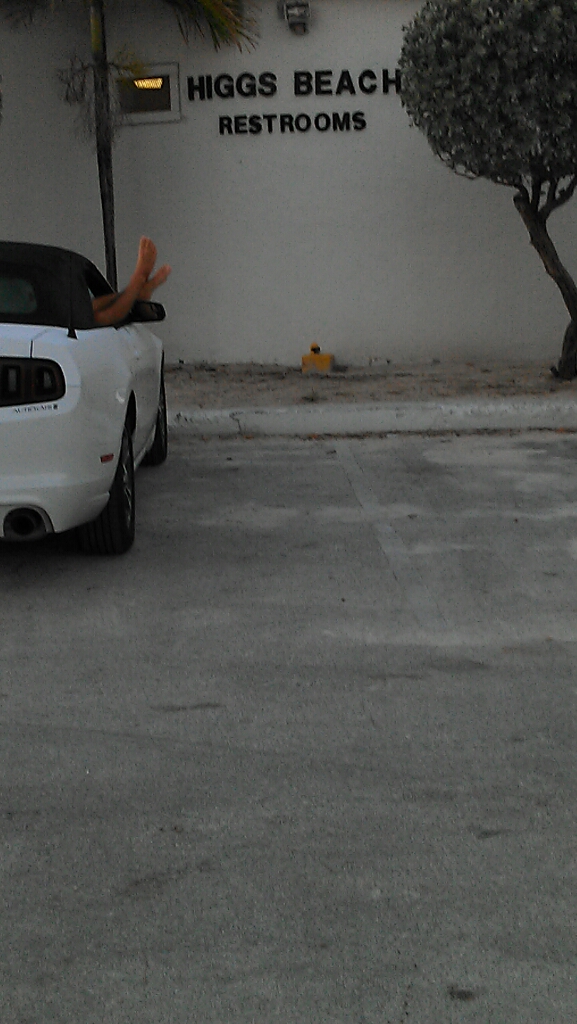 Just because they have no roof does not mean they don't have opinions. Lots of opinions for anyone who will listen. 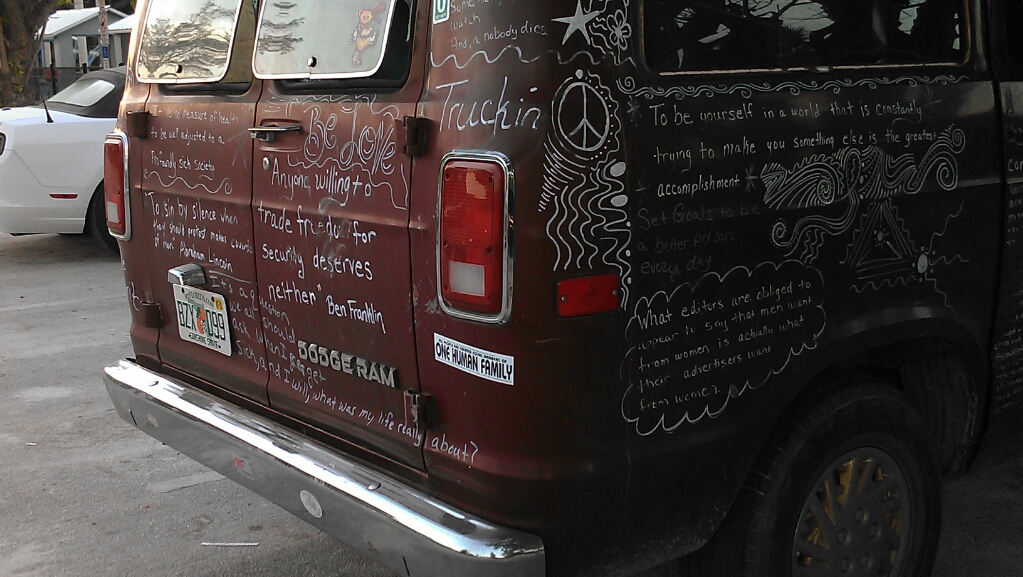 This woman was loudly giving backing directions to a truck that nearly managed to cream another parked car. Had she one, you might have been tempted to tell her not to give up her day job as traffic control is not her strength. No harm done, just a lot of noise. 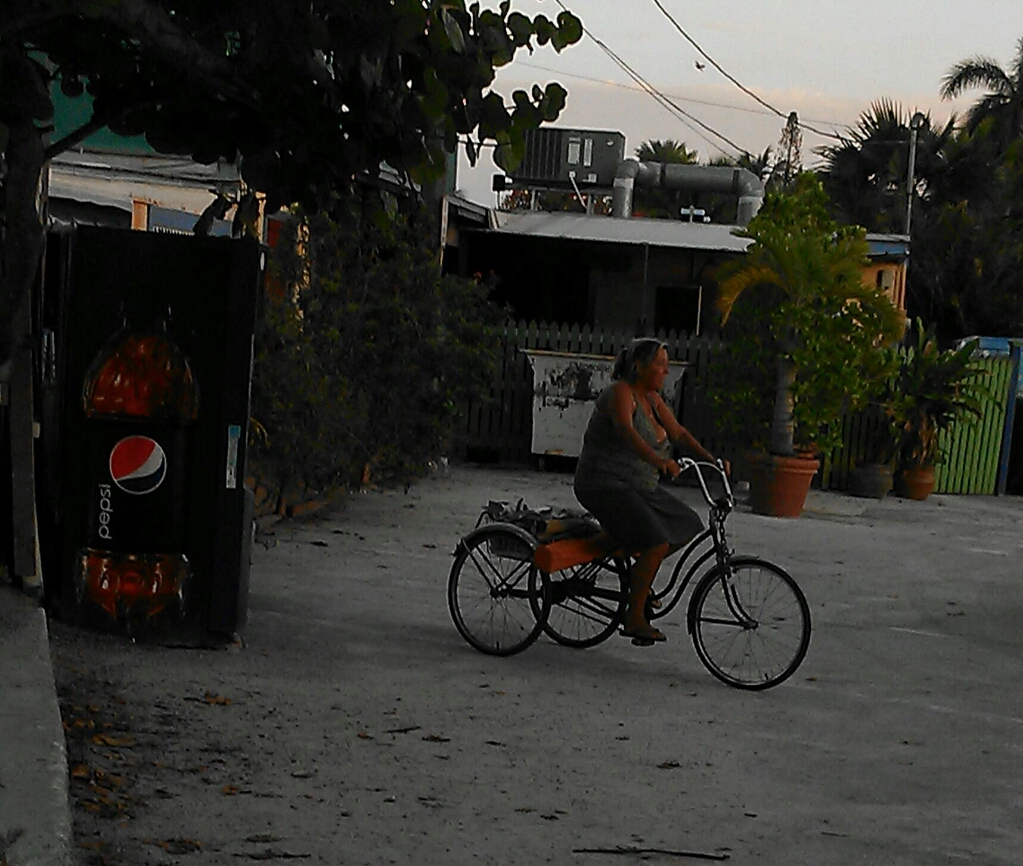 Some of us keep our shoes on the porch, others park their sandals outside their car. The beach is better admired through a windshield for some people. 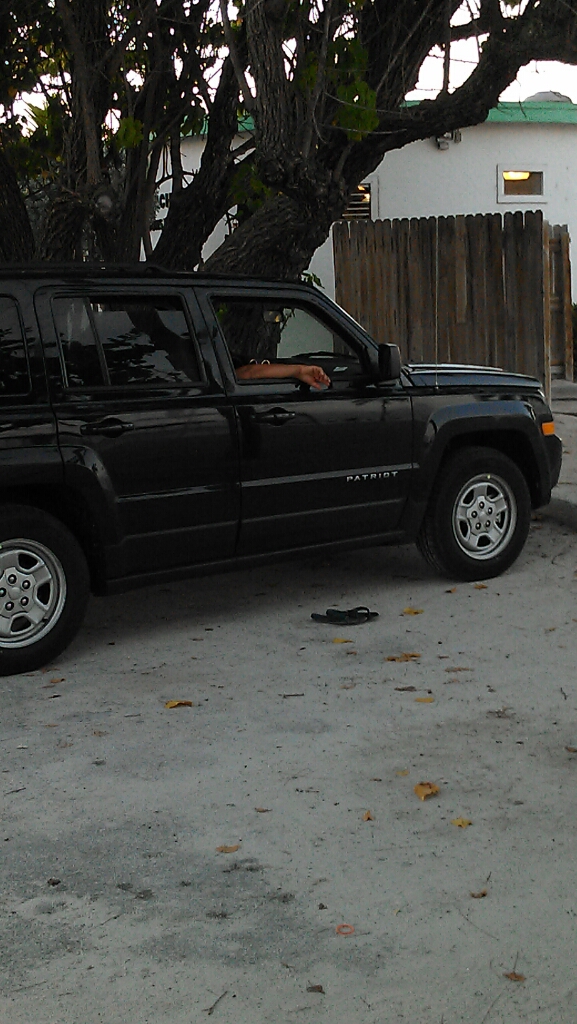 These shelters used to be favorite hang outs for frequently rowdy drunk homeless citizens. They got themselves banned following numerous citizen complaints, picnickers intimidated from bringing their families to the beach. 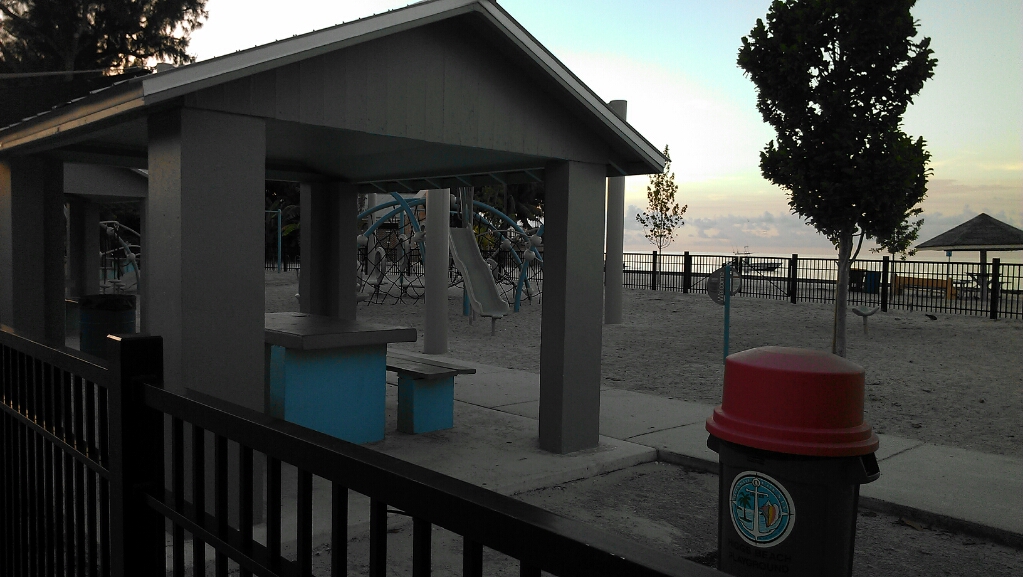 The county adopted a smart and simple expedient of  fencing off the pavilions and calling it a restricted children's playground and all adults must be accompanied by children. Unfortunately one of the shade trees shed a branch when children were playing here so all the trees were promptly mown down and replaced by awnings. But the local subjects and their street drama have been effectively silenced. 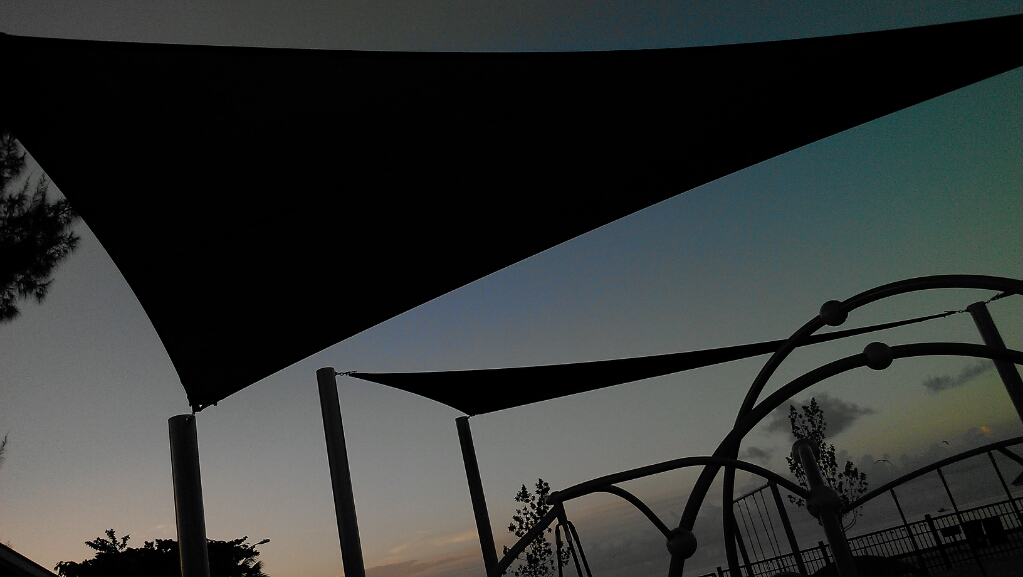 The beach itself is raked every morning to keep noxious vegetable matter off the sand, expensive Bahamian stuff, imported to delight tourists, as are the coconut palms which are not native trees in these islands. 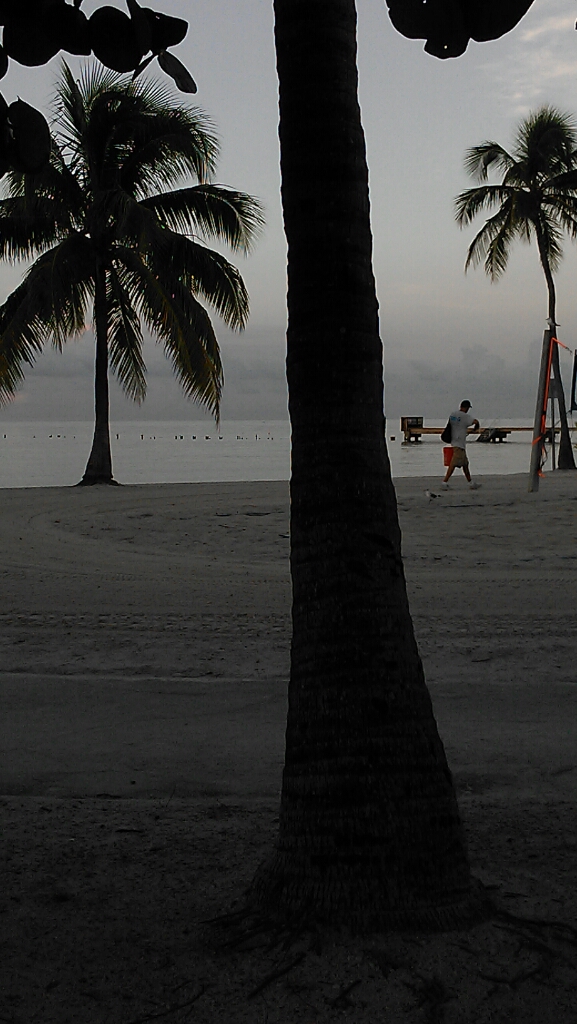 The tractor rolls up and down scooping up dead seaweed while the dude with the bucket wanders around collecting trash. 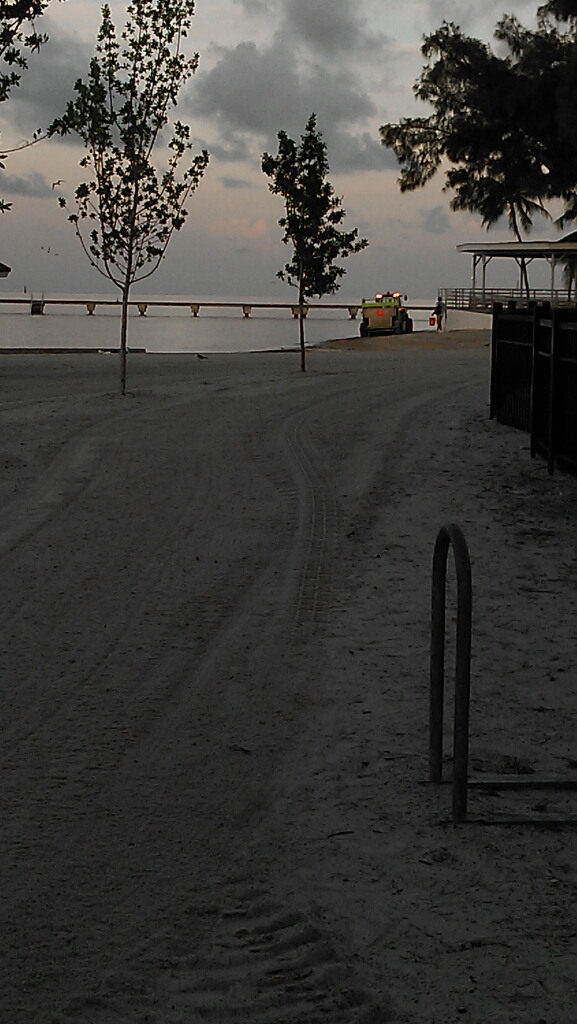 A tractor is actually a rare sight in these islands where agriculture is an unknown profession. What dirt there is, is too expensive to use to grow crops in this salt laden air. Pioneers used to grow pineapples in the Keys a hundred years ago but cultivated fields stop at Homestead. 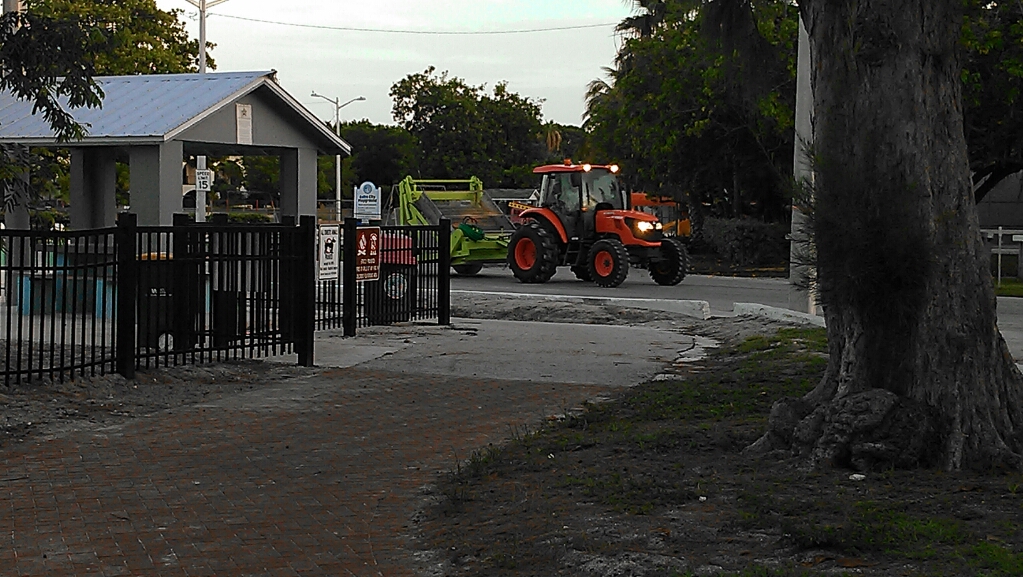 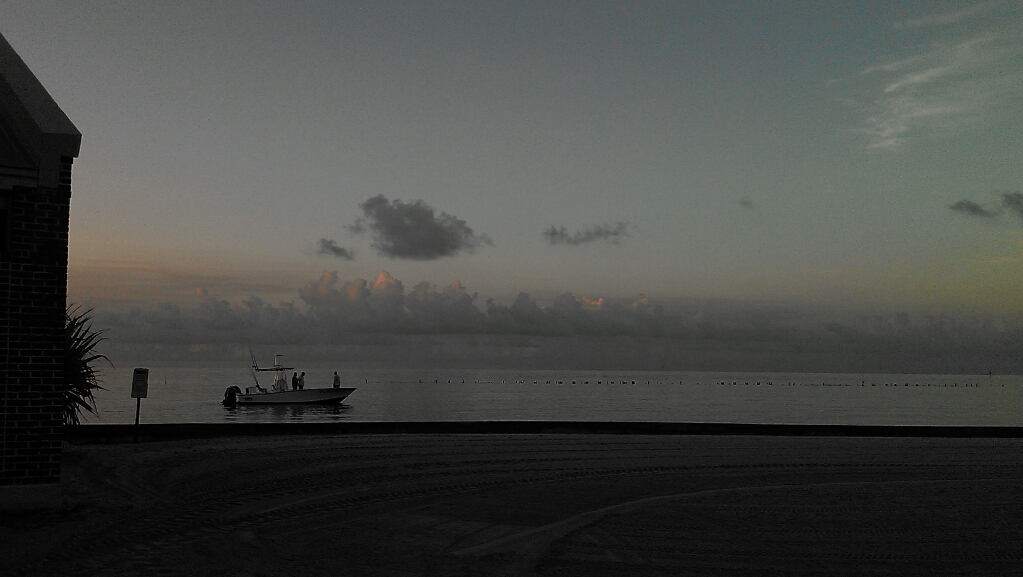 The short cement swimming pier has steps leading down to the water but this morning I saw one dude only on it, running up and down looking for the source of eternal youth. 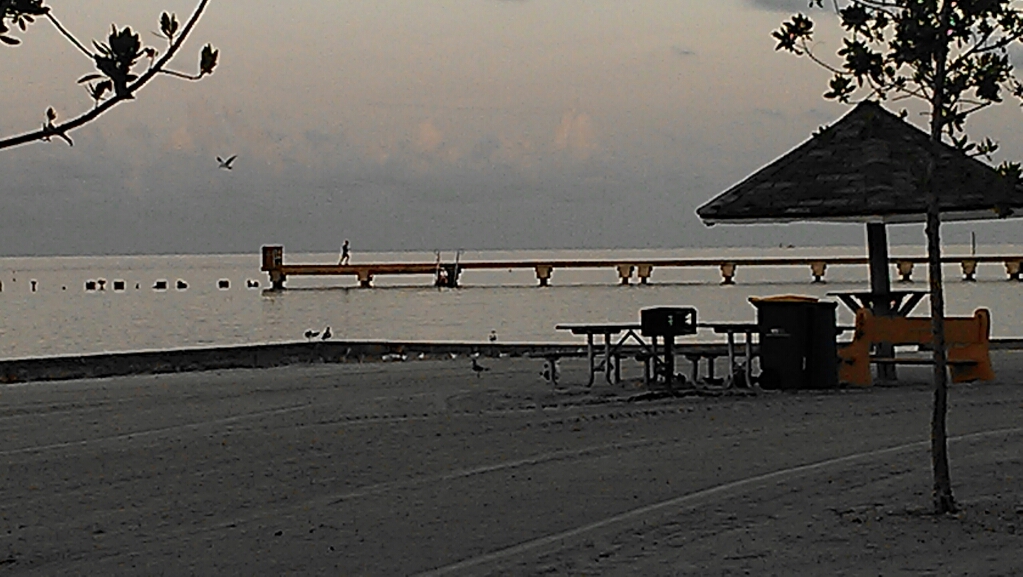 Higgs Beach has grassy areas and a dog park about which I wrote in 2010 and which is still there though under threat of being moved to accommodate a new road pattern at Higgs Beach. 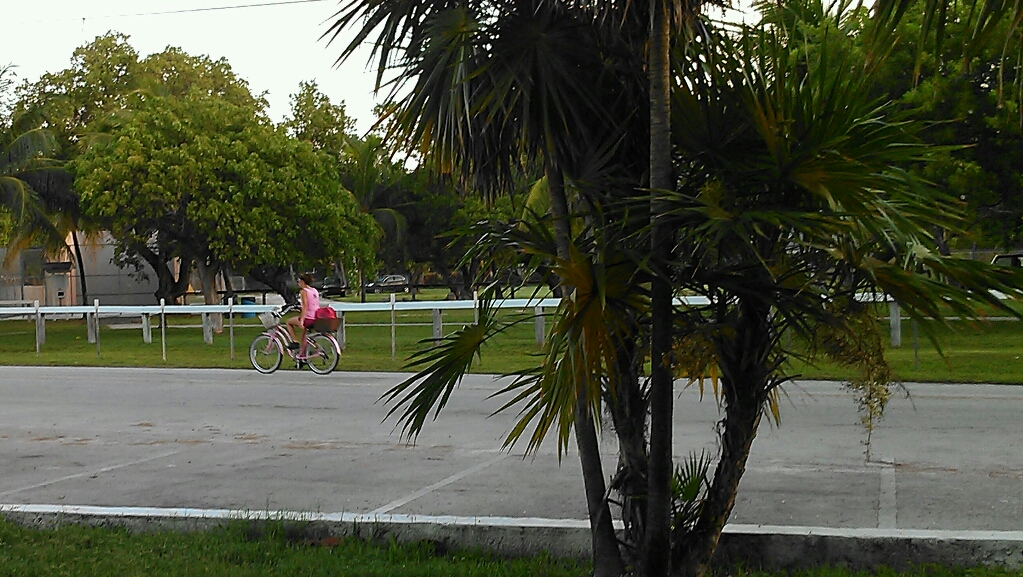 I find these outdoor spectacles of Greco-Roman private exercise to be rather tasteless. God invented gymnasiums for a reason, but fortunately they all have jobs to go to or something because later in the day they disappear, unlike the residentially challenged. 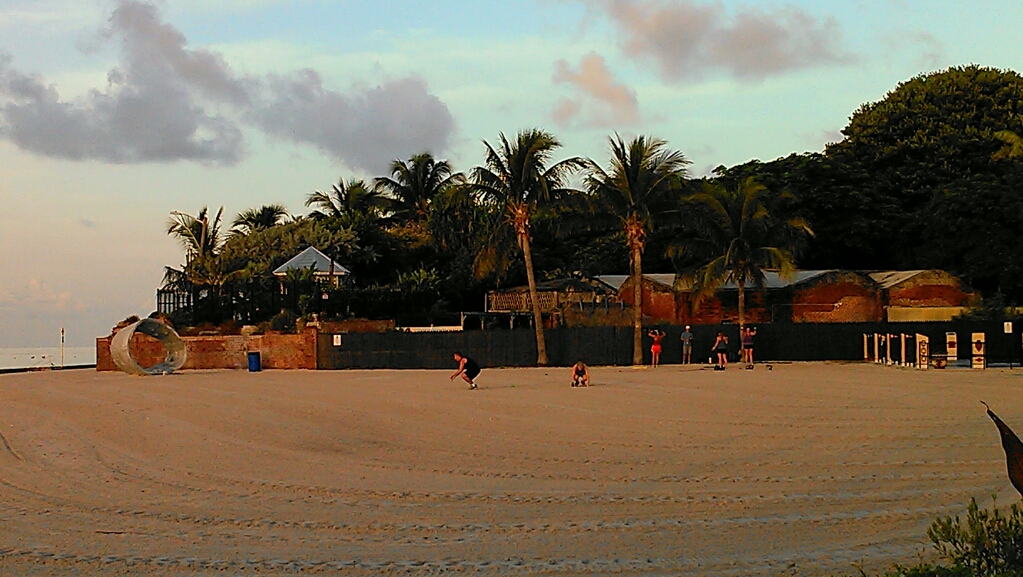 Cheyenne is the world's worst opportunist but these folks were simply exchanging opinions about the world and had no food on offer so she soon lost interest. 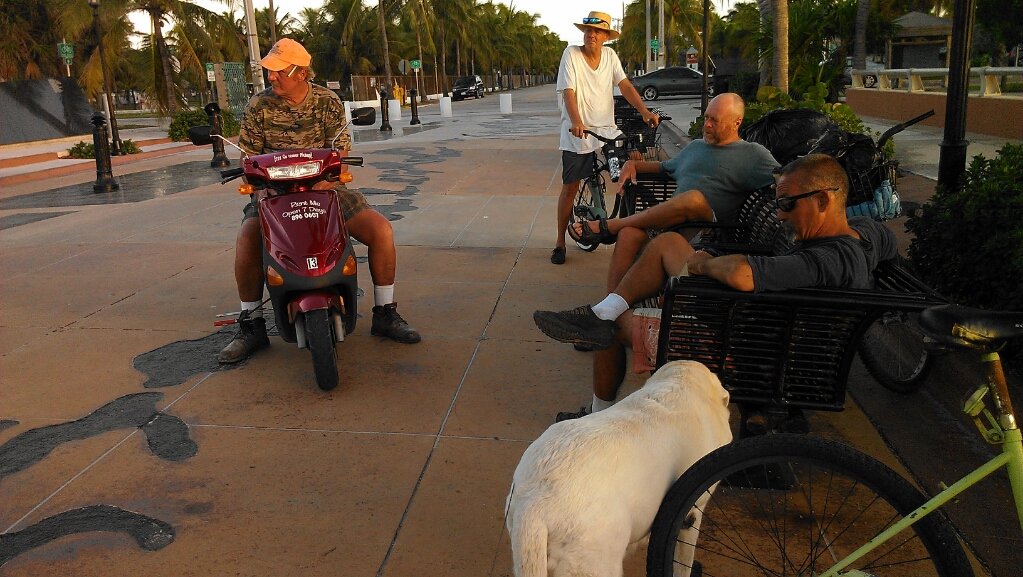 This guy further up the path at Rest Beach next door to Higgs showed immediate interest in my blonde babe...who was more interested in his breakfast which was placed incautiously on the ground. Like most men he would gladly have given up lunch for a chance to chat up one as cute as Cheyenne but I felt bad for him and dragged her onwards. He might thank me later. 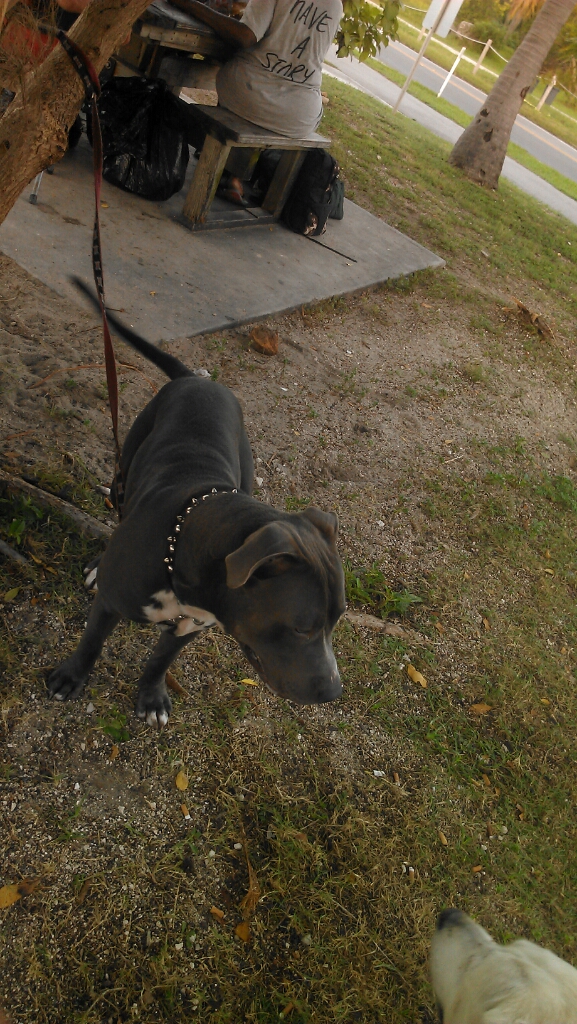 But he sure did look desolate as Cheyenne stumped off with me, her one true love. 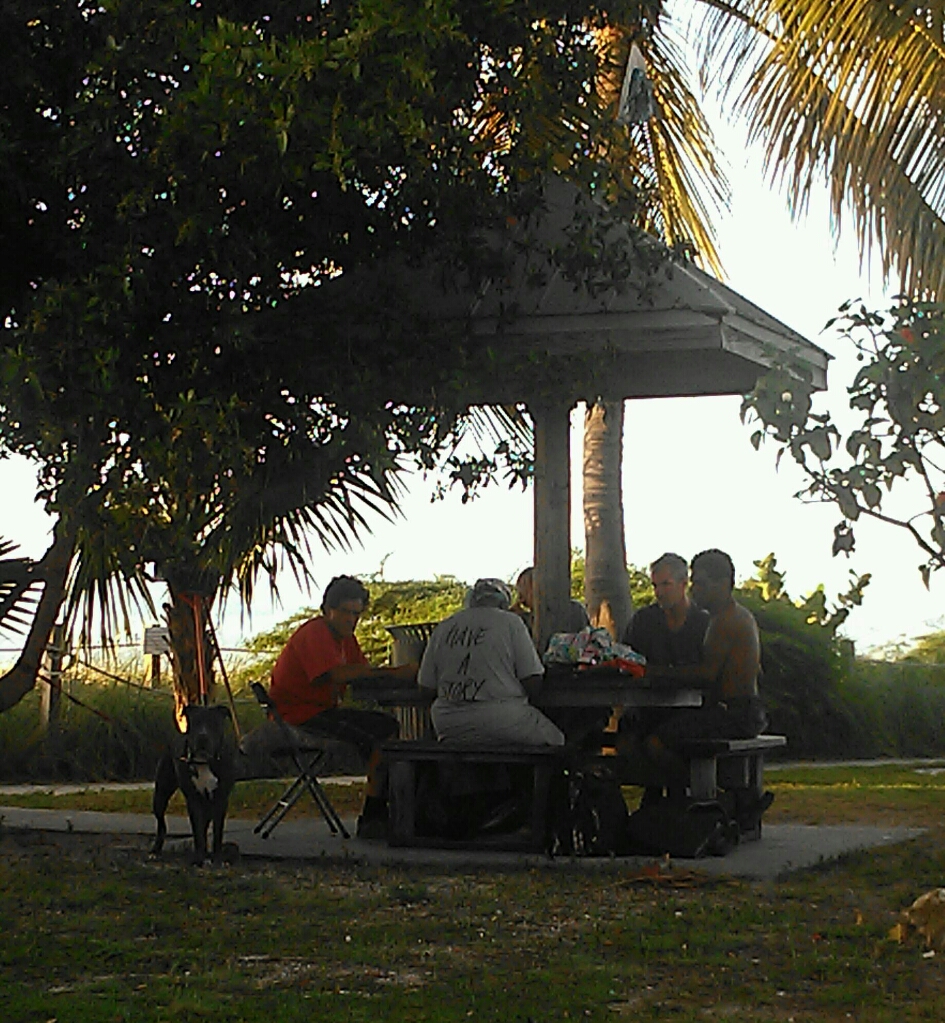 A lot of early risers enjoy the White Street Pier to check out the sunrise. 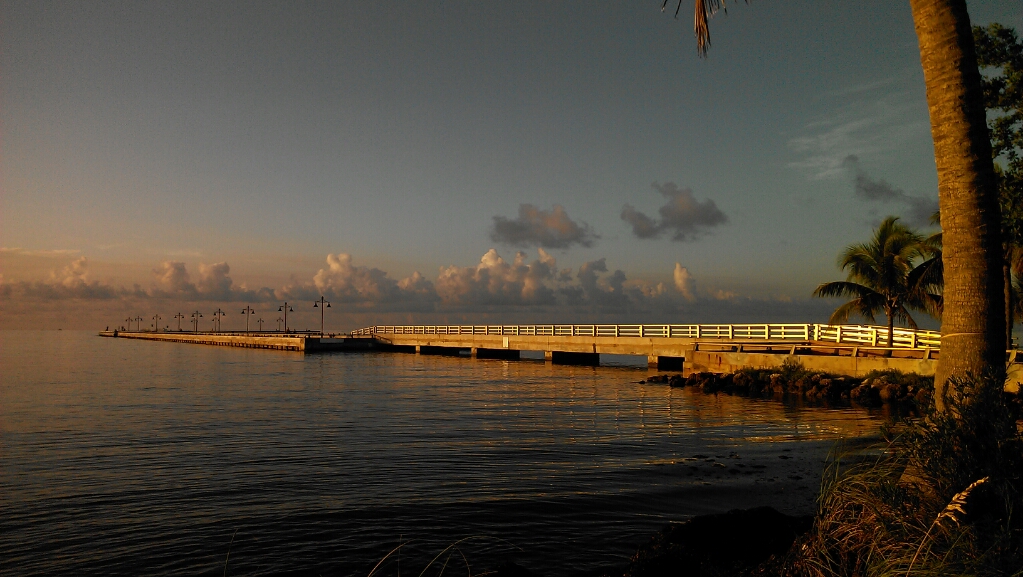 I might have too but my dog pulled me away among the palms and  trash cans at the Bocce Court on the way back to the car... 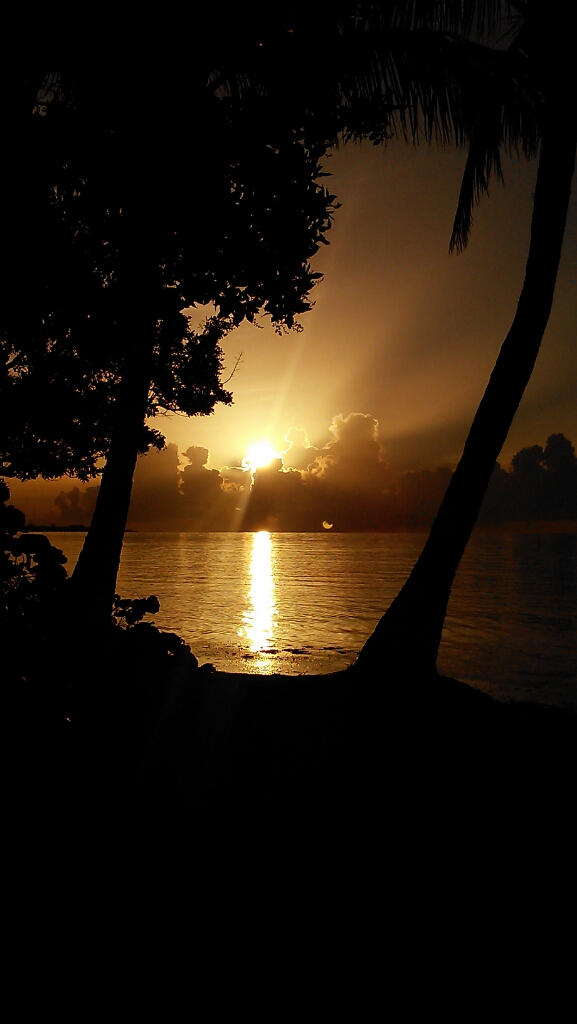