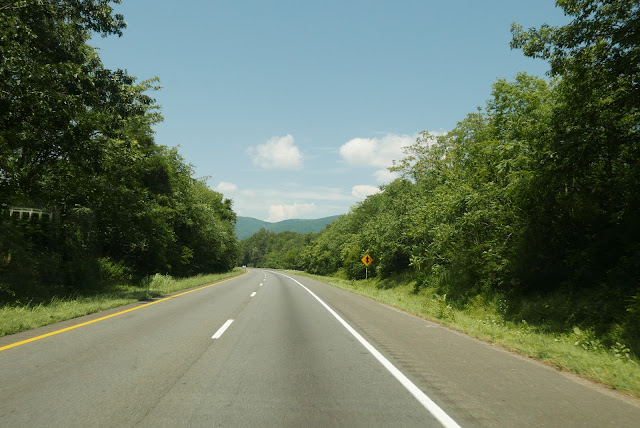 Yesterday we drove across West Virginia through the woods along winding twisting turning backroads to find of all things a winery. It is Harvest Host participant which was how Layne found it, but we weren't spending the night. We had miles to cover to get to Chicago. 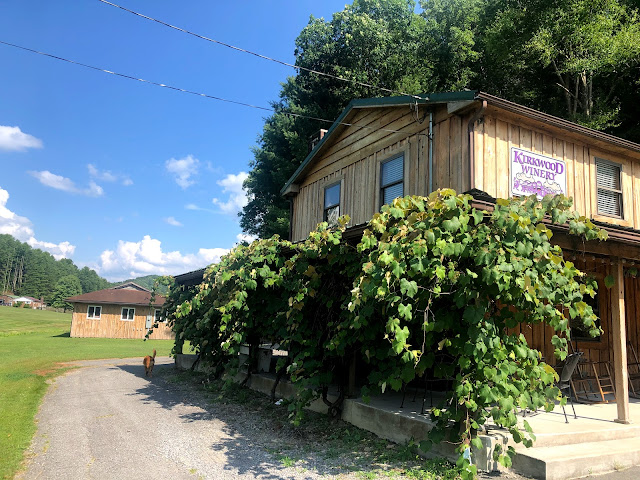 The guy behind the counter wore his mask even while protected by the now usual plastic screen and we tasted some interesting wines by flipping our own masks up as needed. It's the new normal I suppose. The guy doing the pouring was as interesting as the grape tinted port he offered, going off on a. rant, totally unexpected about how the President has screwed everything up and we should have been wearing masks from the beginning and how the economy is suffering and so forth. We just stood there and sipped the conceptions and let him vent. We haven't seen tourist tags on vehicles and I'm forced to assume that the struggle to understand the virus and to adapt to it isn't doing anyone any good. There must be frustration everywhere even among the people we don't speak with. 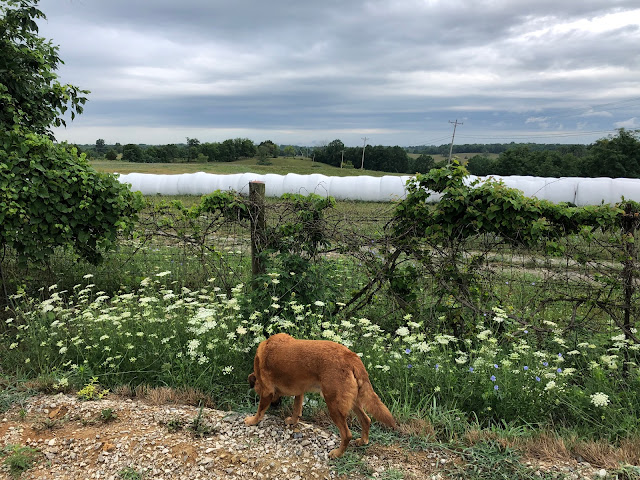 Isolation feels more like a privilege than ever. Especially on the road as we can limit our contacts as much or as little as we like. Our firsts top ended up being at the conversion factory in DeLand when a shelf came adrift by coincidence less than an hour from Custom Coach Creations as we traveled on I-95. That was a short unscheduled deviations hick set us back so we arrived late at my wife's sisters place near Asheville. The rest to hang out in the woods was welcome so we were rested when we set off on Monday to find Eric who lives slightly north of Richmond. We met through scooters and he has a garage filled with interesting rides. 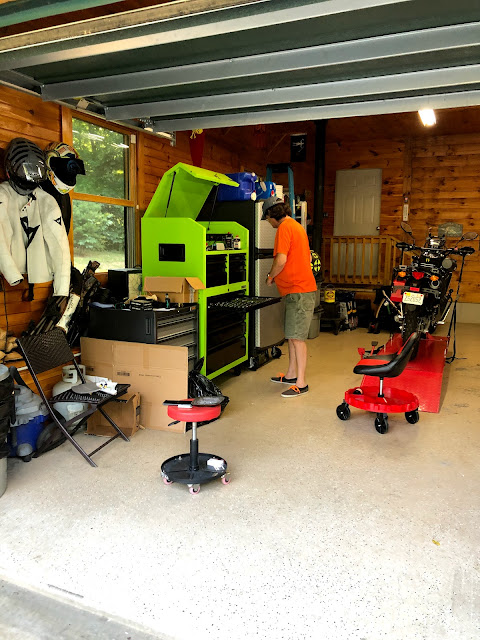 We did some male binding adjusting the headlights on the van while Rusty sat outside in the sun reveling in the lawn that surrounds Eric's place. He and Lisa have four dogs which required some canine separation but we feasted on steak and corn and chocolate and so forth which called for more rest... 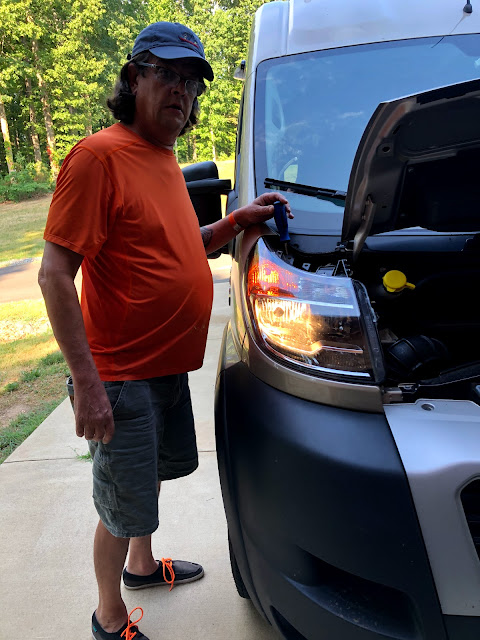 I got a quick ride on a rarity, a Benelli 135 mini bike which I expected would make me feel like a circus bear on a monocycle but it was shockingly fun ride. Eric went to Pennsylvania to get the bike and orders accessories from all over to make it a fun project for his inventive mind. You can follow his exploits on Kraken's Garage as he is diving into the world. of YouTube video productions. 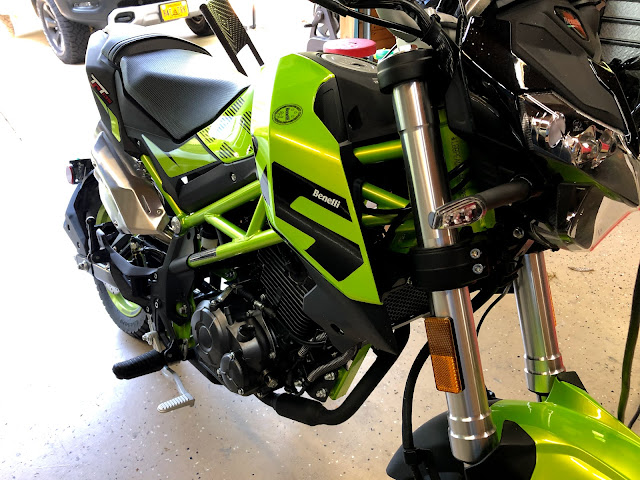 With left over steak and chocolate pie in the fridge (how cool is that? our own fridge) we took to the hills. The Promaster 3500 is the biggest of the three variants of this van, an offshoot of the Fiat Ducato, and though all three types of Promaster share the same engine the 3500 has more powerful suspension to cope with the longer body and greater cargo carrying capacity. I try to stick close to 60 mph on the road to keep fuel consumption between 18 and 20 miles to the gallon, but it cruises happily at 70 mph and 15 mpg. On the usual angry online forums people complain about the engine and the seating and this that and the other but after 4200 miles and long days driving I find it a very capable vehicle on the road. To expect formula one performance from a fully Alden cargo van just seems stupid to me but we all know that internet anonymity brings out the stupid in the best of us. And some of the whiniest people seem to inhabit Promaster discussion boards. I have come to ignore them and just keep driving. 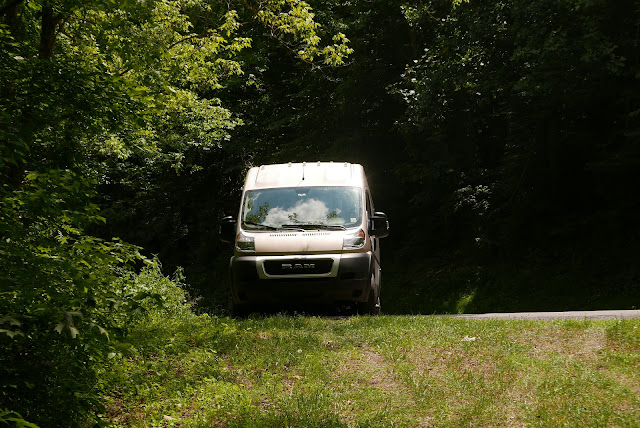 Rusty has been learning to adapt and as far as I can tell has no opinions about the van other than he likes to get out and explore new places as you might expect. Travel seems to exhaust the little tyke and he sleeps soundly in his bed which we set up behind the front seats for him to use whenever he wants a rest. 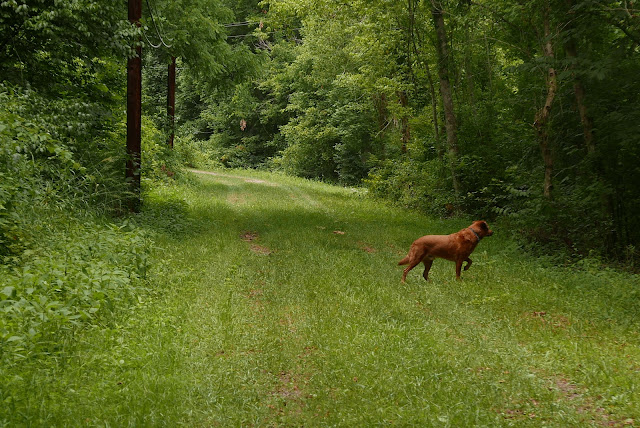 He doesn't mind at all being in a cooler climate, even though it is hot around here, and the unusual deciduous forests speak his curiosity. Thunder and lightning greeted us in Indiana  so a lunch pause was an exercise in curling up in bed listening to the rain on the roof and hoping the thunder would move further away. Like they say the van life is all about the weather, whether it rains or whether it doesn't and today the weather gods noticed I wasn't working so rain it is for the  crew of Gannet 2.
Posted by Conchscooter at 12:30 PM 3 comments: