Belize was not on the tourist map twenty years ago and because we couldn't simply Google it we had no idea what it would be like. Layne took this picture of me outside the Immigration office at Punta Gorda, the place where we checked in with a welter of useless paperwork. Belize was a tight bureaucracy in those days and may still be for all we know. The first thing we did was to go shopping looking for whatever might be odd and different after months of Latin American tiendas as they call the stores. A sail to the Bahamas had opened my eyes years before to the pernicious influence of my childhood when I found foods I hadn't seen for decades, squashed fly biscuits, curry pastes and weird sauces that arrived in Nassau but in those pre-internet days came no further west. Nowadays you order everything on Amazon of course. We found my childhood on the shelves once again, this time in Punta Gorda where the clerk spoke English and took US dollars pegged at one to two Belizean dollars. 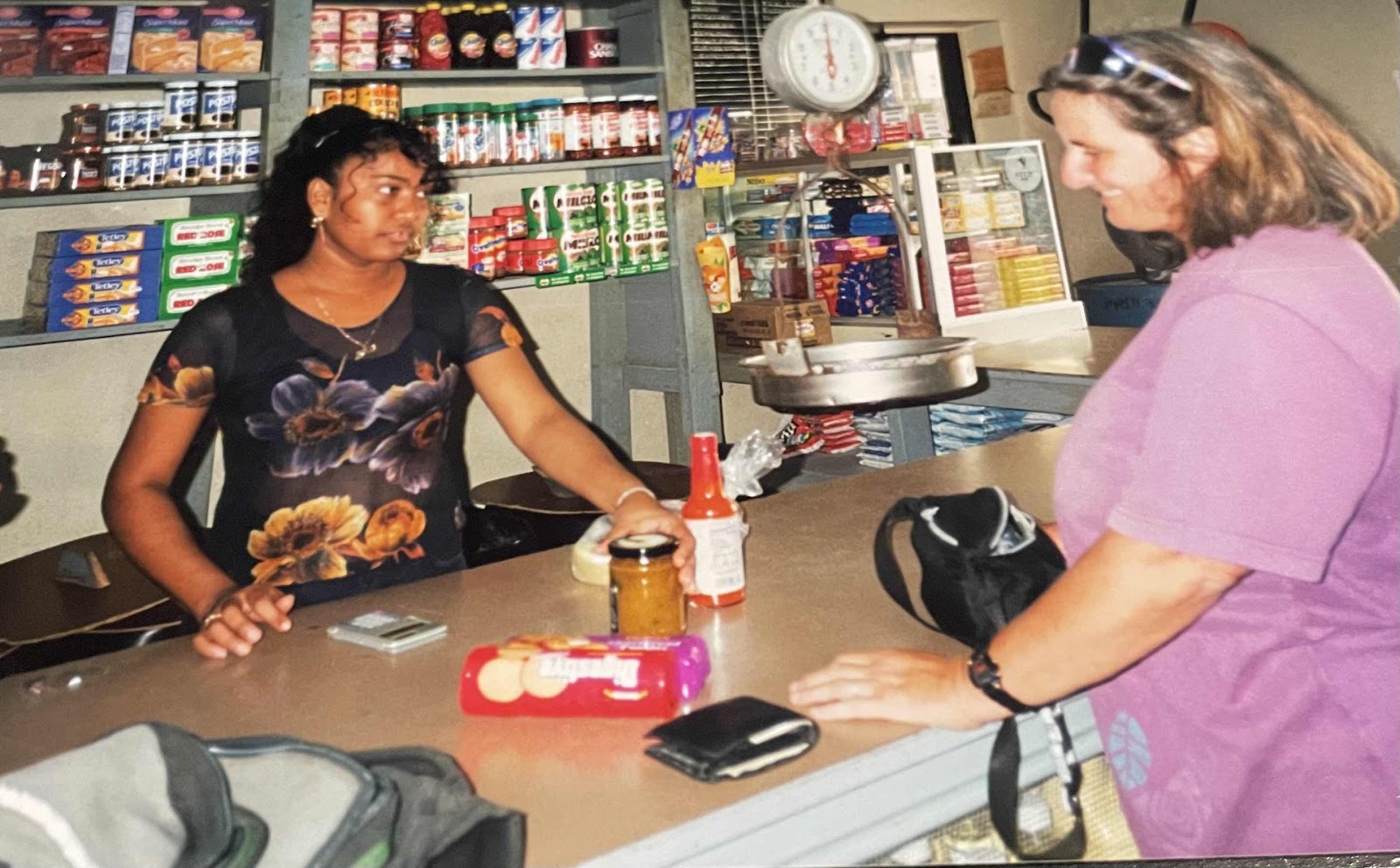 Then things went wrong. The open roads of Punta Gorda got frothed into a ghastly cauldron by an unexpected cold front and we found ourselves plunging dangerously on our anchor with the ragged coast right behind us and down wind. When you are busy buying Garibaldi biscuits its hard to spot a cold front, the nautical equivalent of texting while driving. This one spanked us hard. We pulled up the anchor with some great difficulty and pondered our options. 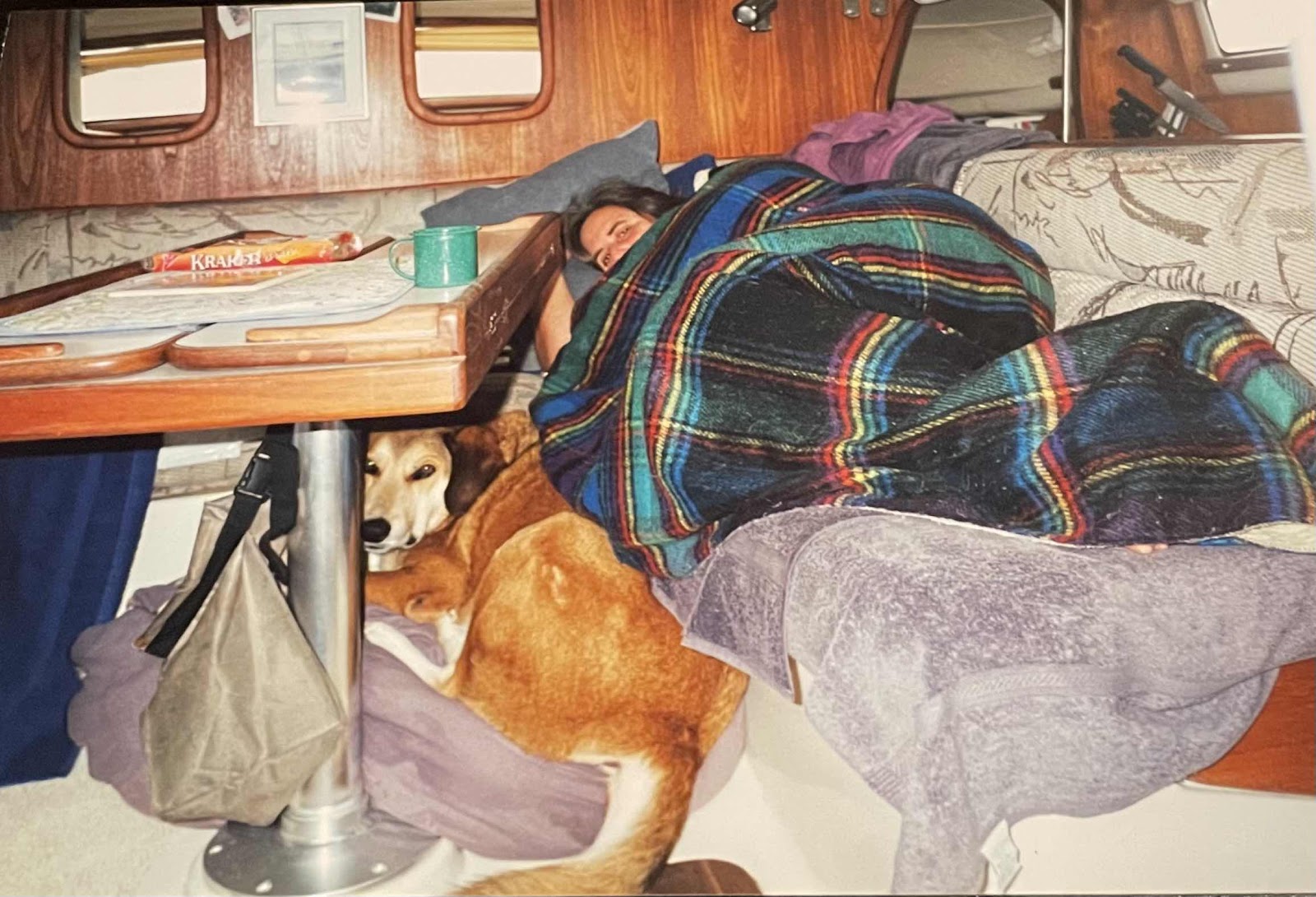 In the end we raced downwind twenty miles back to Guatemala (!) and hid behind the spit of land outside Puerto Barrios that has first given us refuge a few weeks earlier on our arrival in Guatemala. It was cold for tropical travelers like us. We had no heat source on the Gemini catamaran except blankets and dogs. In between walks ashore we cuddled them and tried to stay warm. We were shocked by the strength and chill of the cold front this far south. After the storm blew by we went back to Belize, with no officials any the wiser and resumed our cruise. 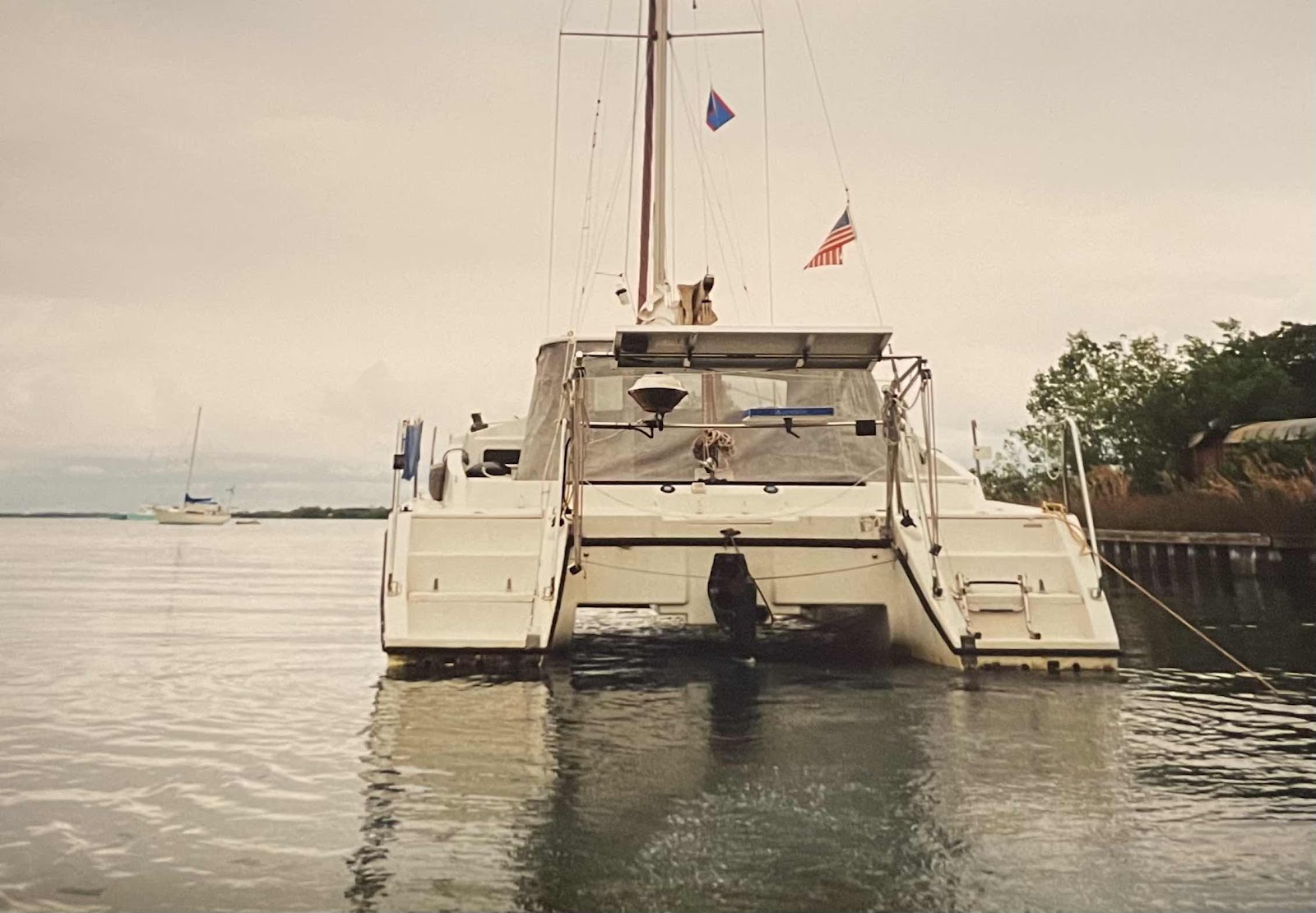 It was a lovely interlude actually, sailing the reef, stopping in villages on the mainland zigging and zagging our way to the north of the country, about 150 miles long if I recall correctly. We weathered wind and rain, reefs and terrible visibility and had a good time. By the time we got to the north end of the country we stopped in Caye Caulker (pronounced "Key Corker") for some food and civilization. 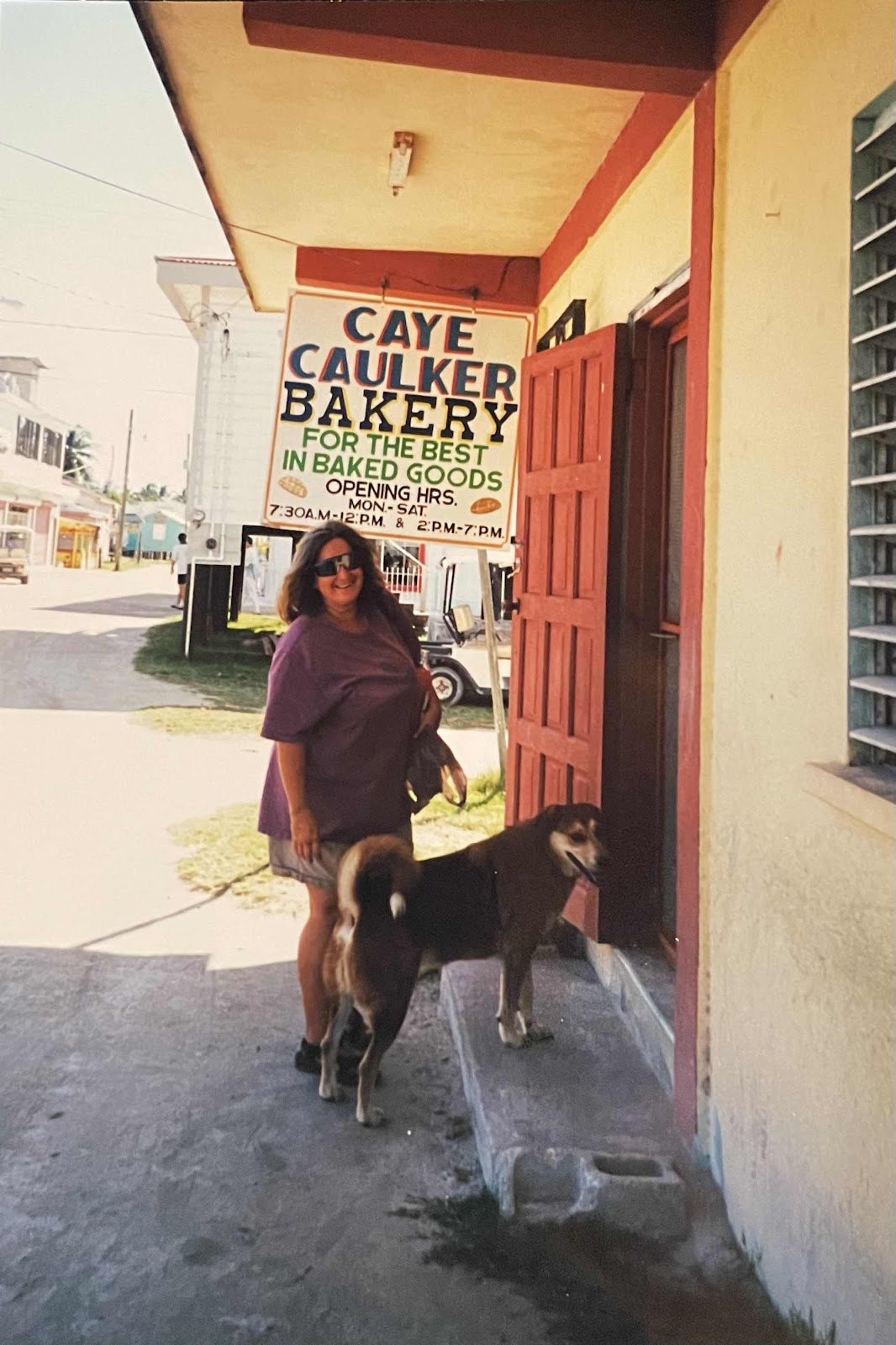 Belize was an odd country. It was British in its roots with more than a hint of English speaking Caribbean with fried foods and not enough curry in our opinion!  The British made space for Indians in their colonies which spread delicious south Asian cuisines in unexpected places. Goat curry and roti were memorable in St Vincent for instance but Belize did odd things to Mexican cuisine. 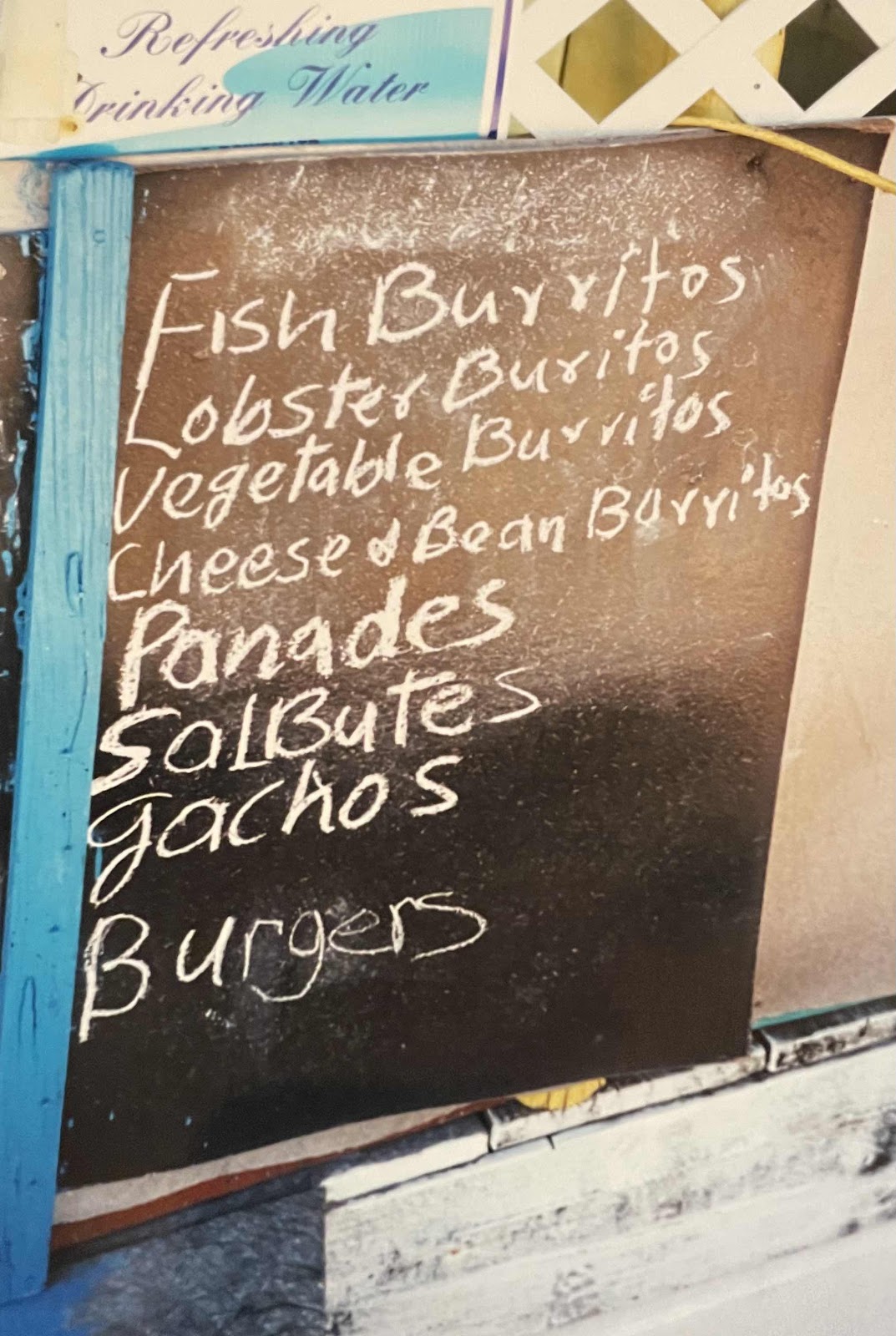 We discovered the only beer in the country was Beliken, a pleasant enough light lager in bottles and cans. What, we asked ourselves, no Dos Equis? We aren't beer snobs by a long stretch but this oddness needed investigation. We discovered the brewer of Beliken in this country of 160,000 people had persuaded the government to ban the import of beer to support his monopoly. 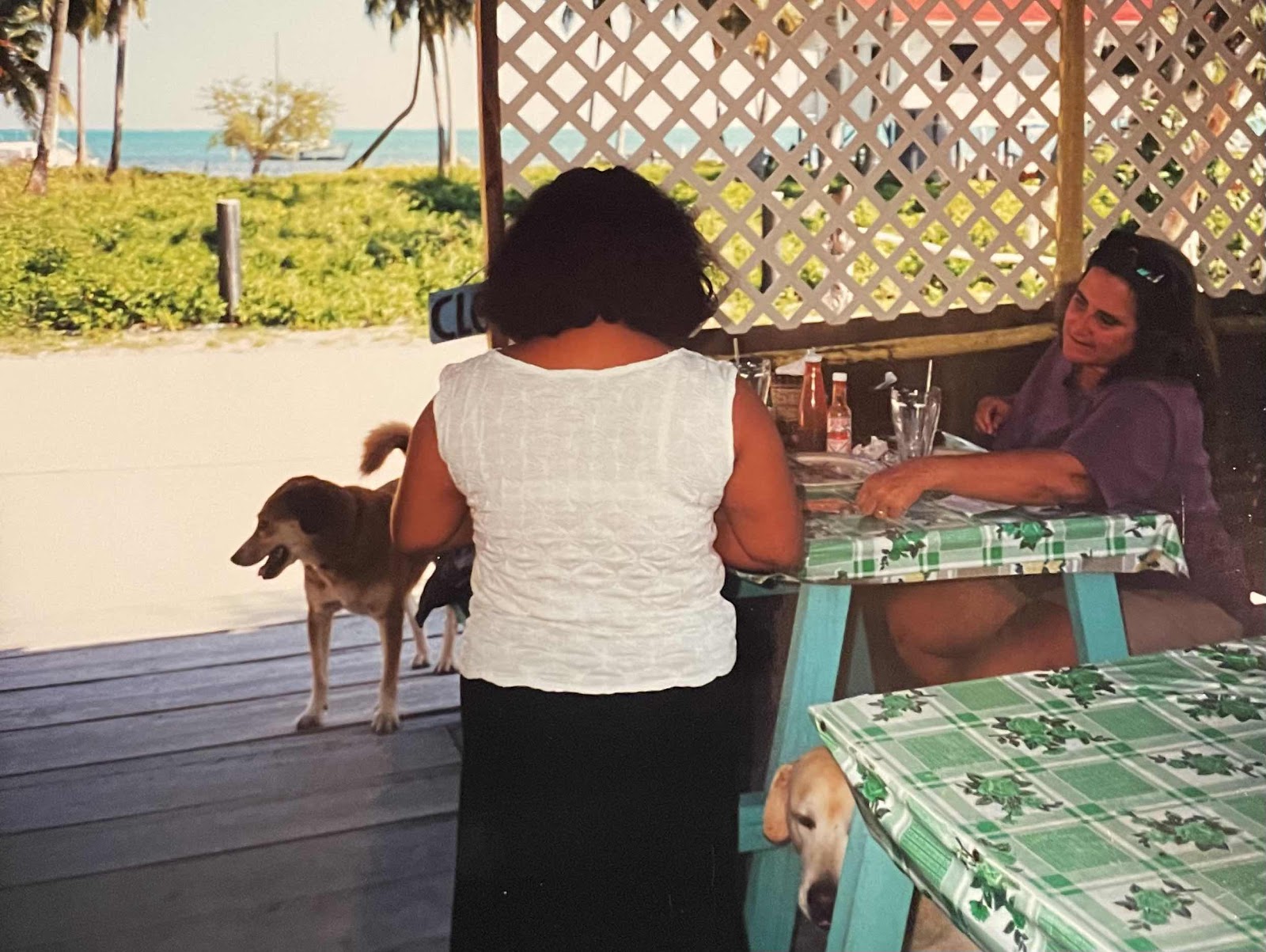 We weren't moved to do much inland travel in this country. At the time Guatemala was still treating the country as a breakaway province and the Internet hadn't opened up American eyes to this strange little country. I am actually curious to go back and get a better view of the place so we are considering driving to Panama next year to make up for what we missed twenty years ago. Seems reasonable. 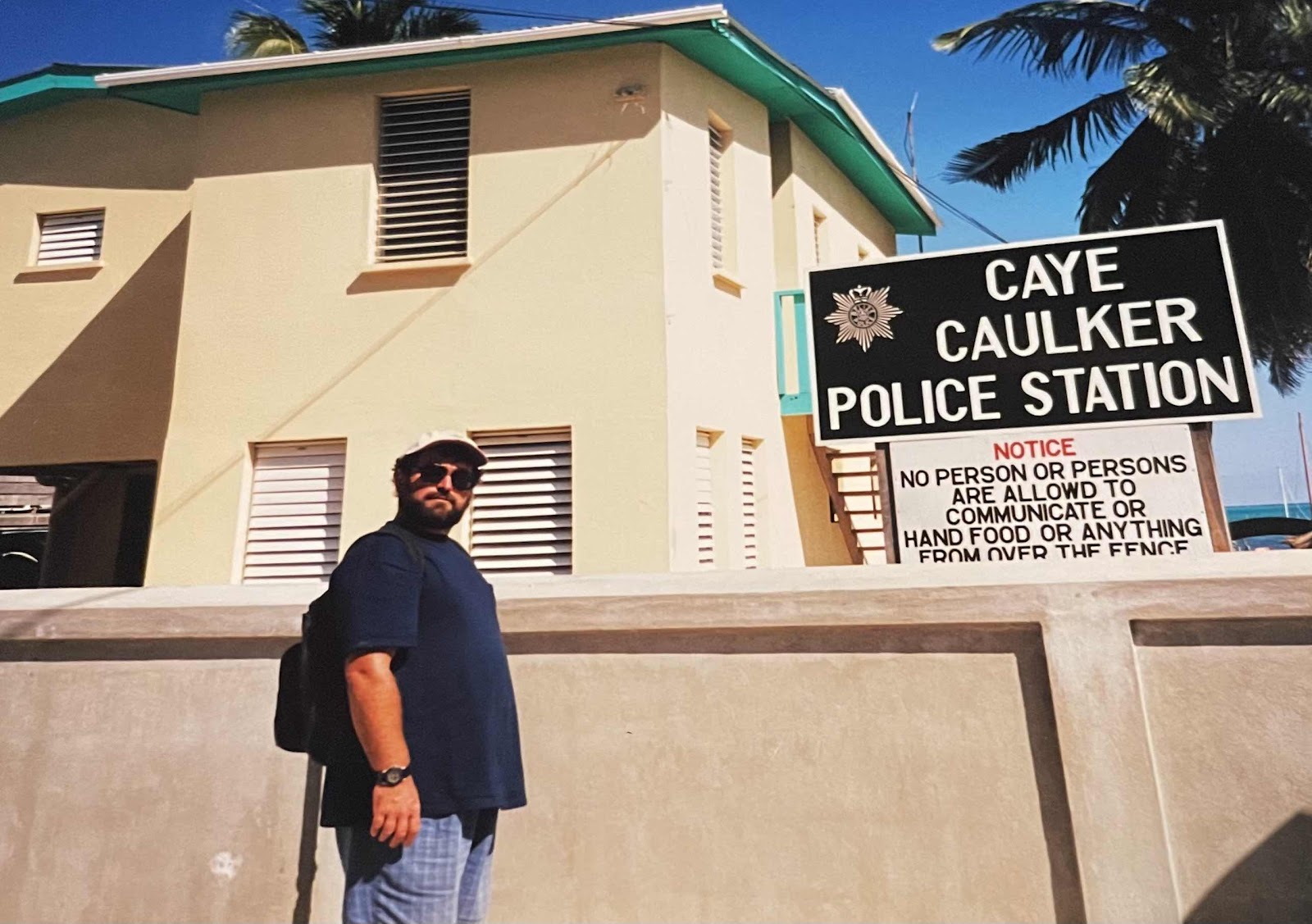 Remember we hadn't lived in the Keys yet so we were coming to these environments as vacation country and I at last had found tropical heat, saltwater and none of that California cold and coastal fog. I was happy. 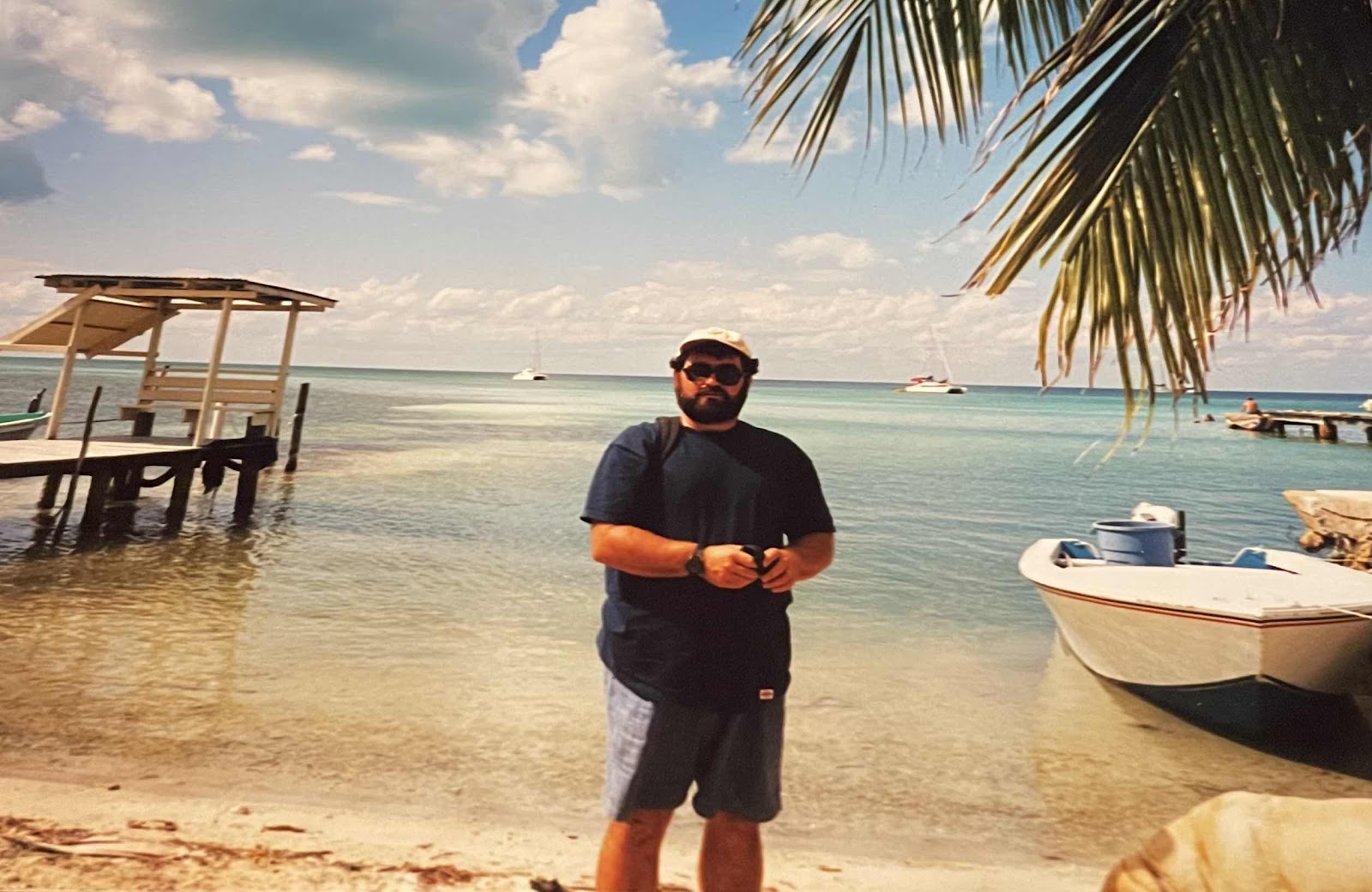 I wouldn't mind coming back by boat to the Caribbean but I fear I may be running out of time to wrangle a boat in my seventies! Time really is passing. 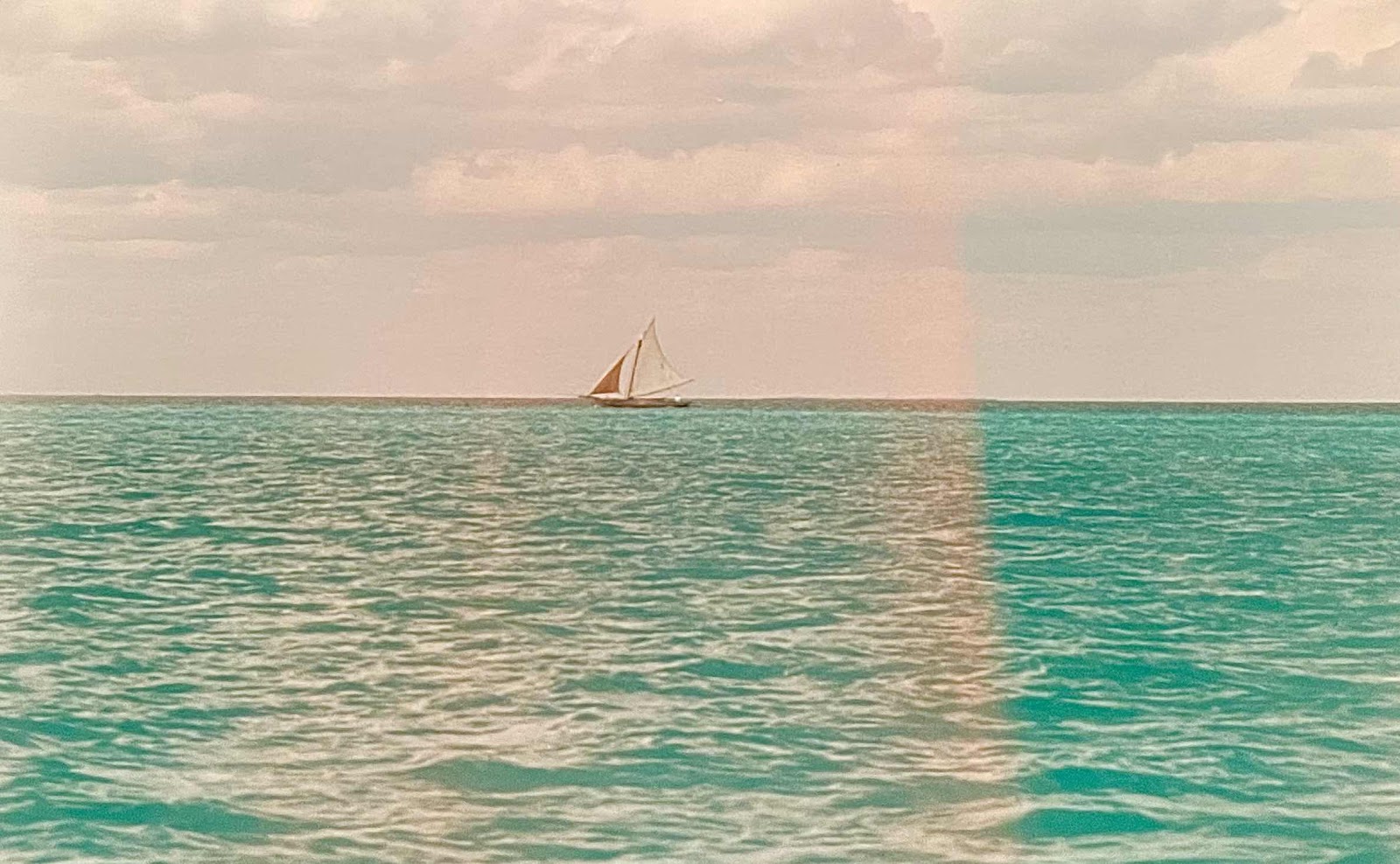 Florida Keys 1950s, or Cay Caulker Year 2000.  Those dogs made themselves at home everywhere. 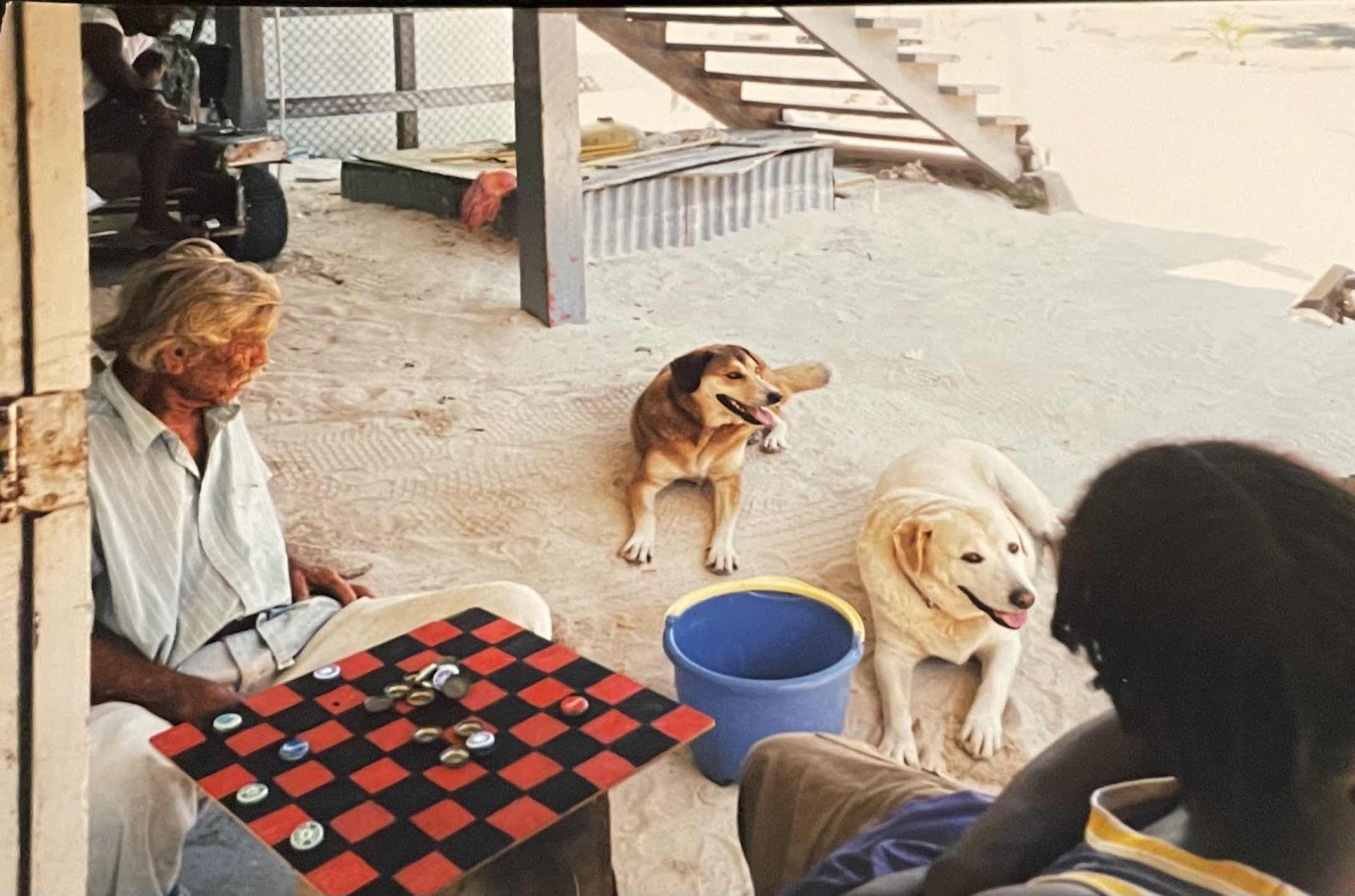 There wasn't much in these coastal communities but we explored diligently. I was reading a Facebook post about traveling in Baja and someone asked about taking their dogs. You can imagine the wittering that went on about every kind of danger to be encountered. I think they would have heart attacks if they ever got to see these pictures of Debs and Emma enjoying life abroad. 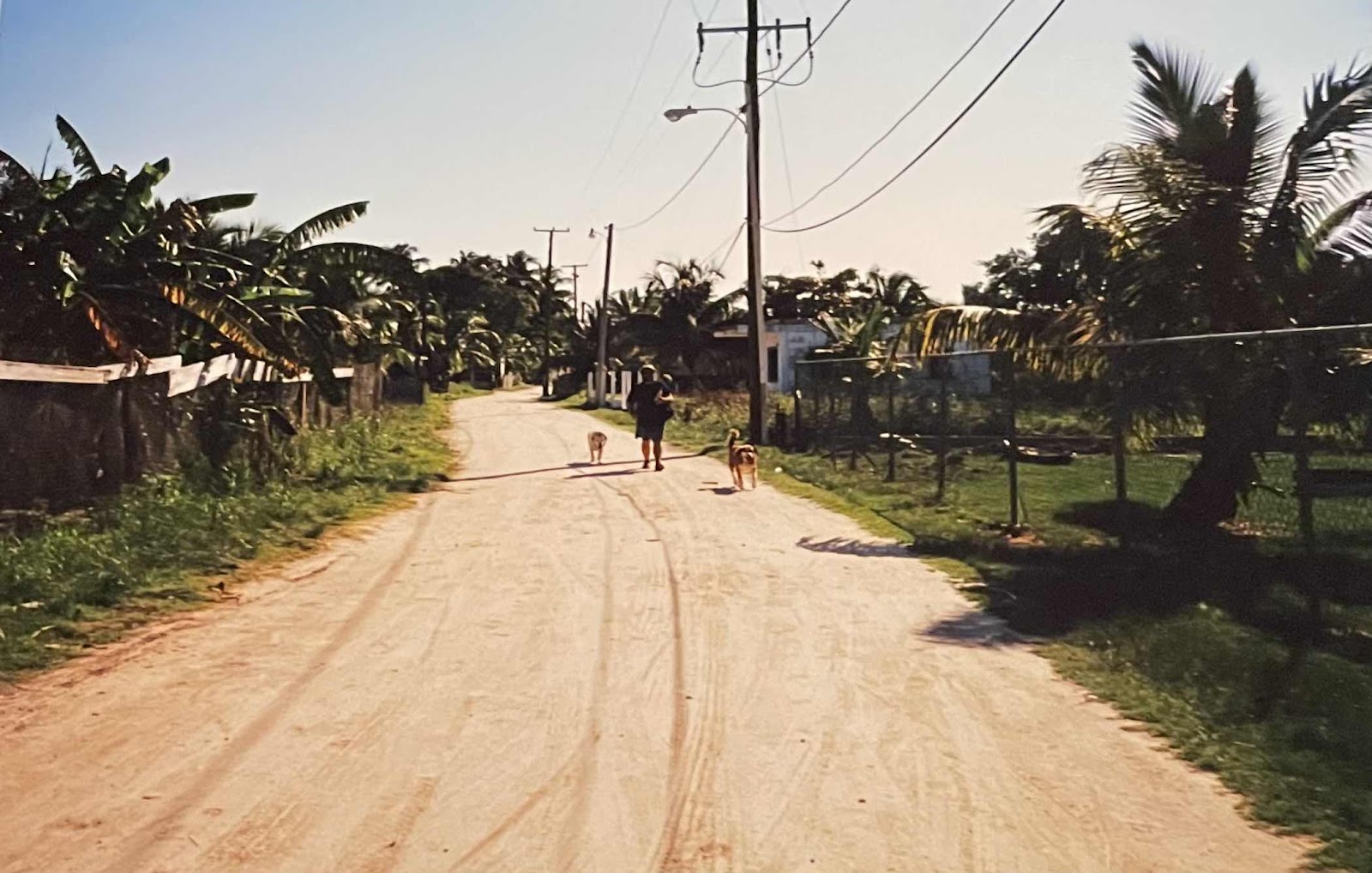 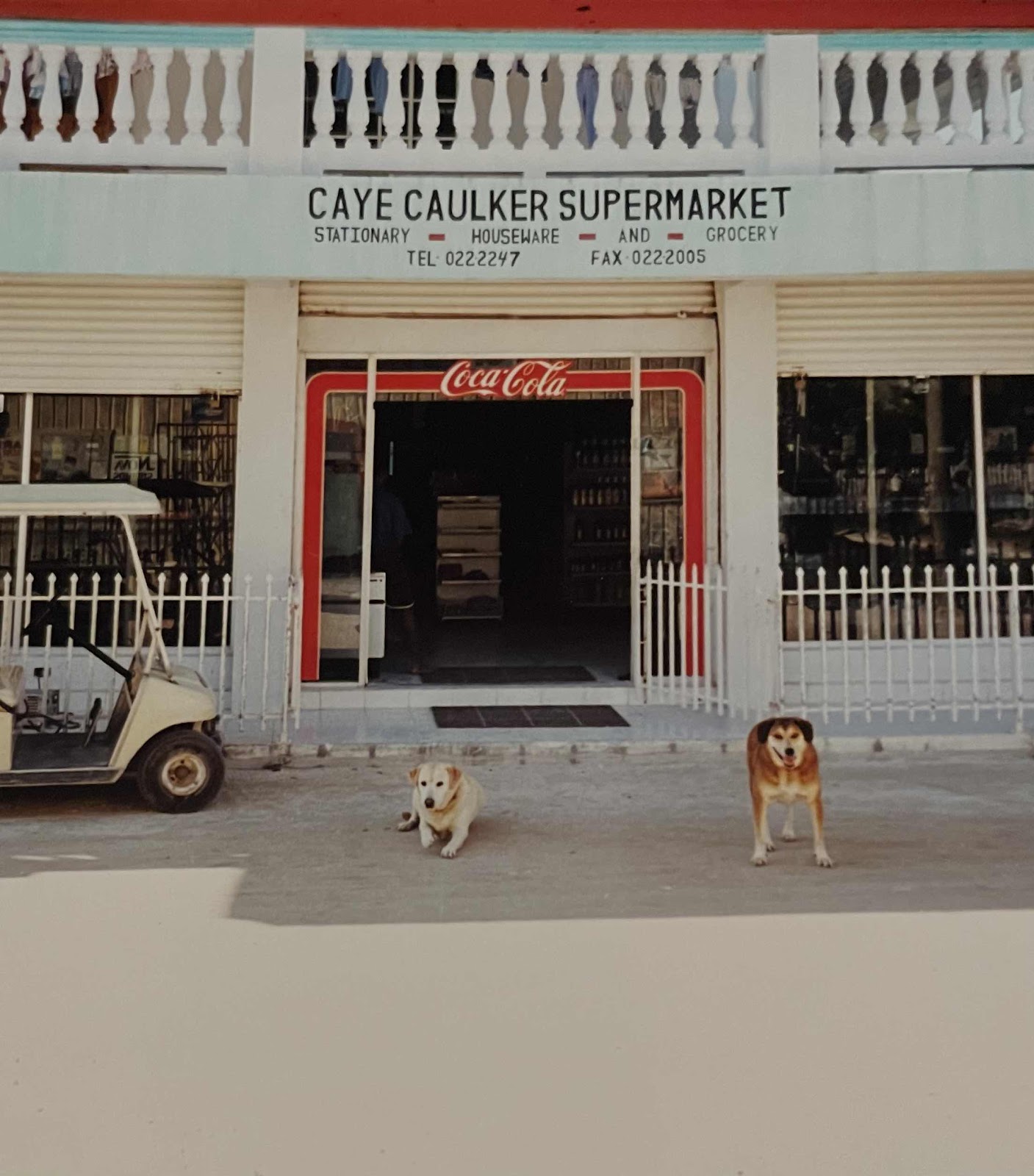 Eventually we got sailing again and made the 180 mile passage to Isla Mujeres, Mexico overnight from San Pedro Belize. It was a good sail with following southeast winds and mostly calm seas. Debs looks like an old hand by this stage: 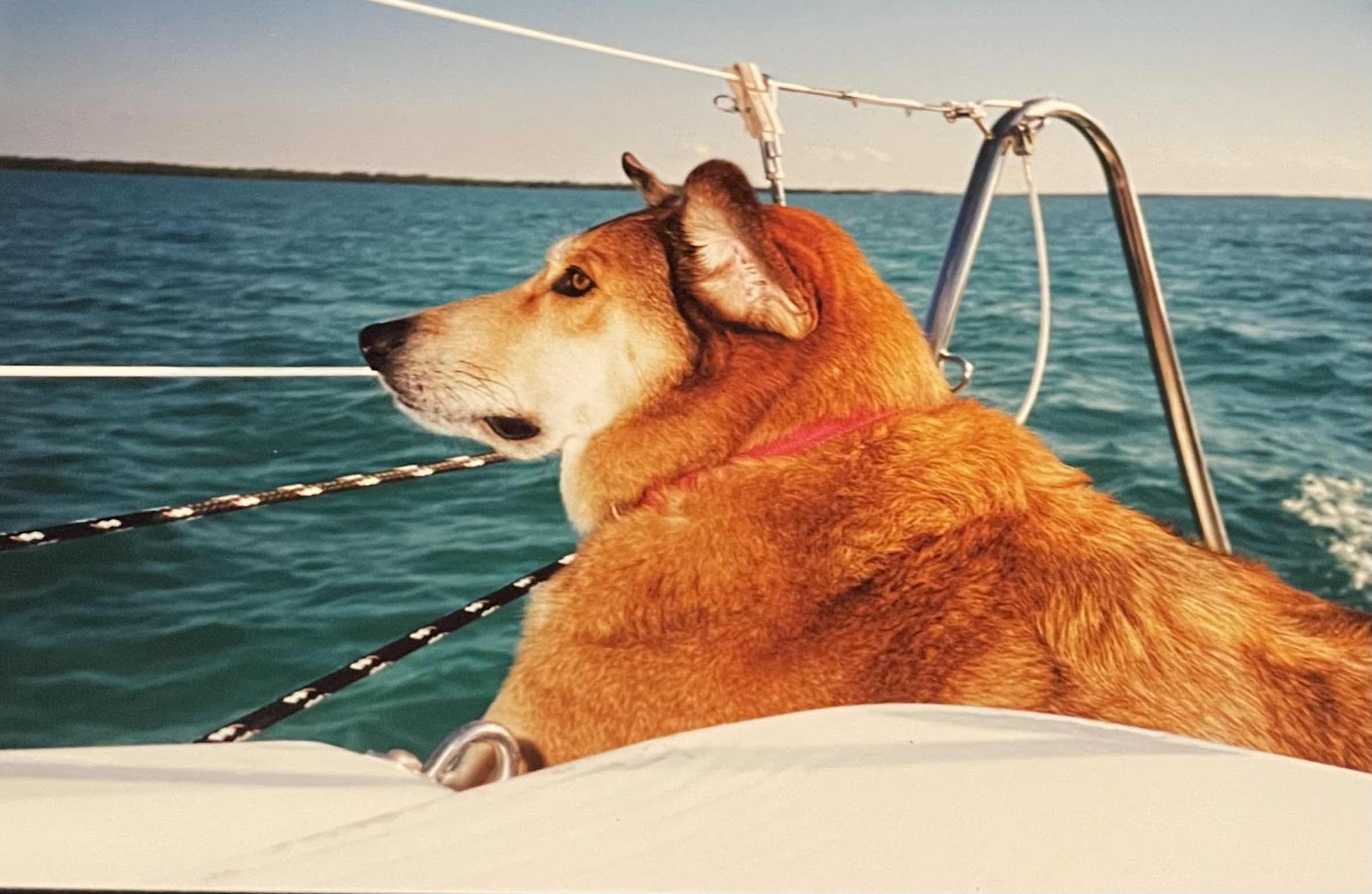 They really loved each other. You can tell me dogs don't have emotions like us but I won't believe you. 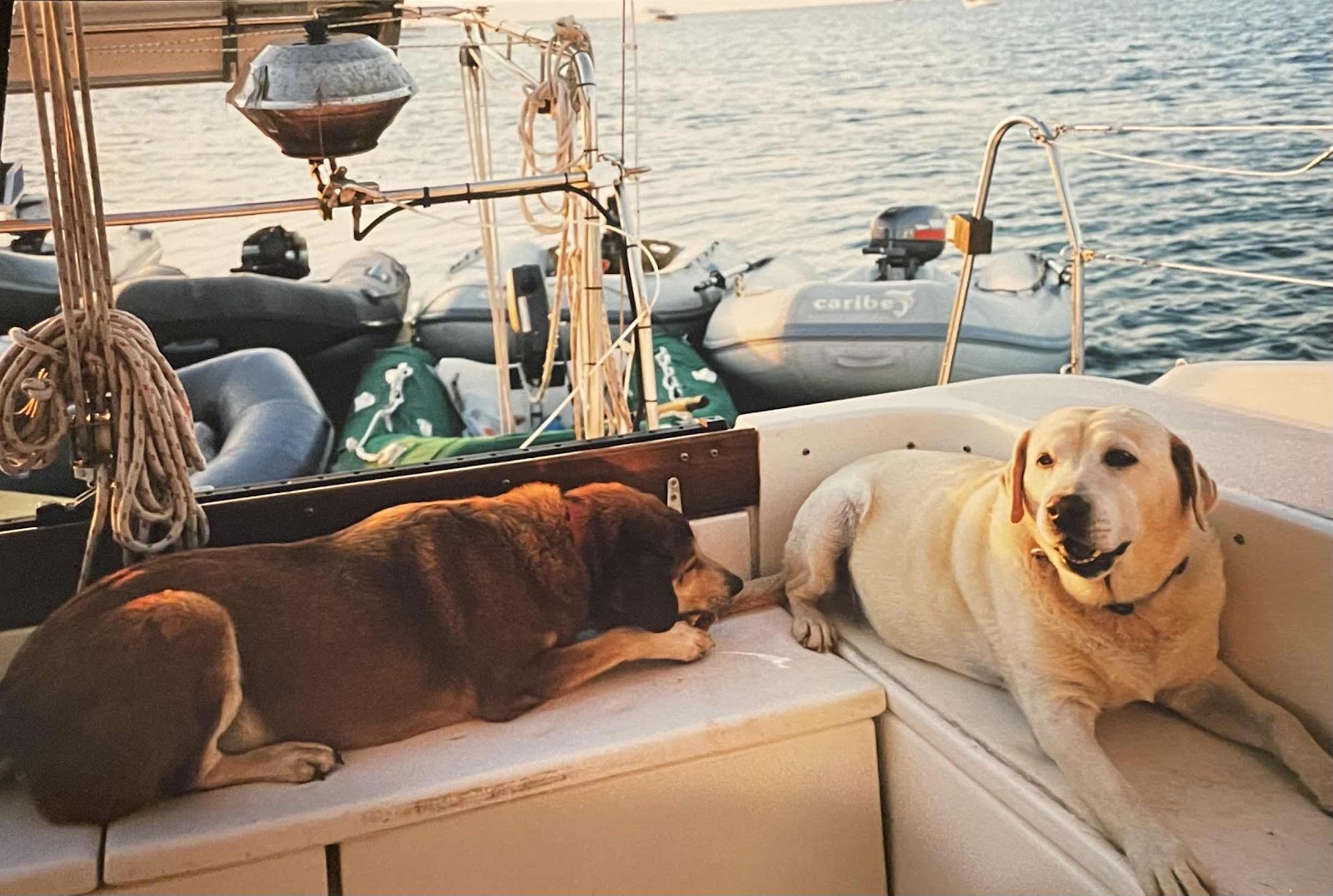 We had the catamaran with the bg cabin so we hosted the sailors get togethers. The talk was about where we last met, the cost of boat parts where we were, good places to eat, and the prospects for the next passage. It was easy going friendship among people with common experiences outside the norm. 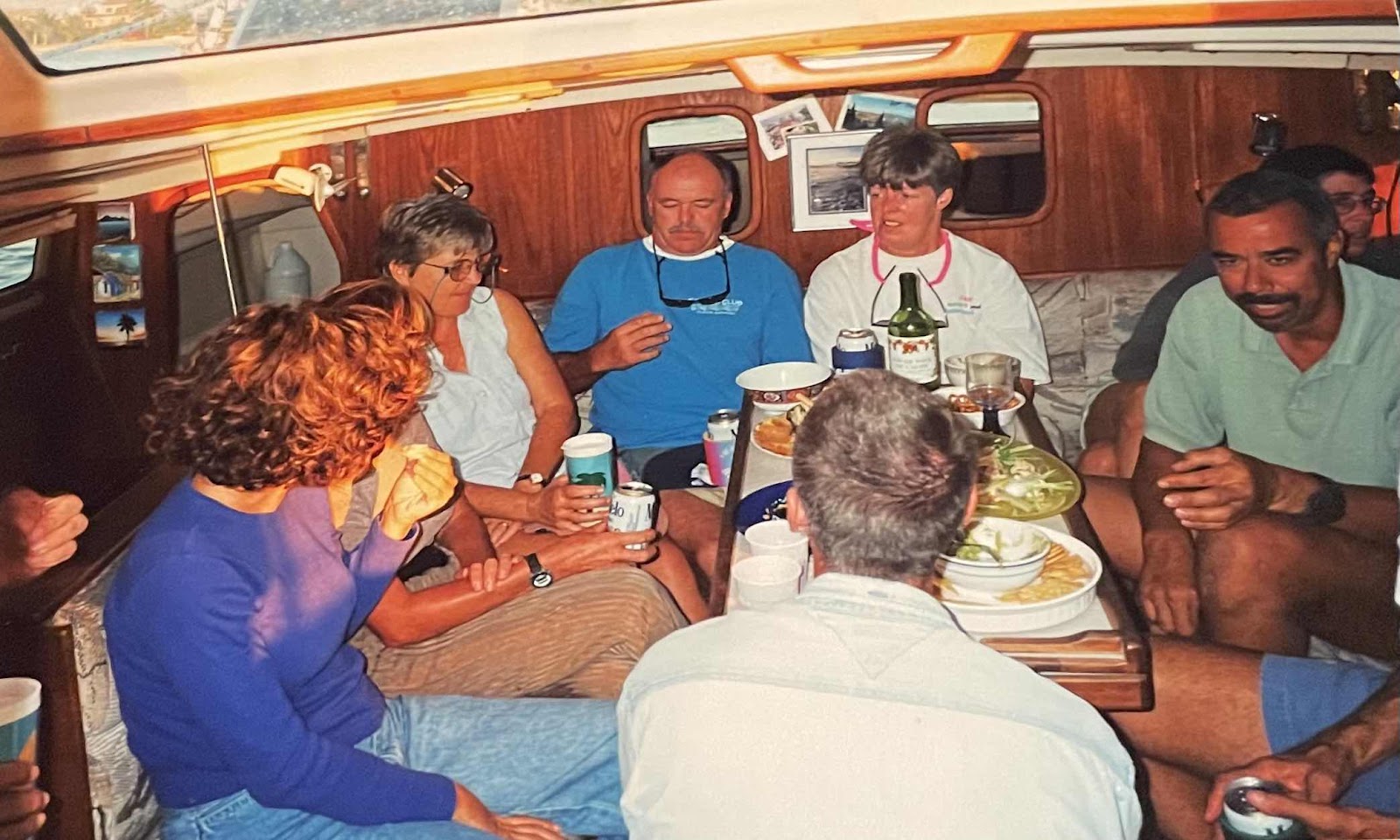 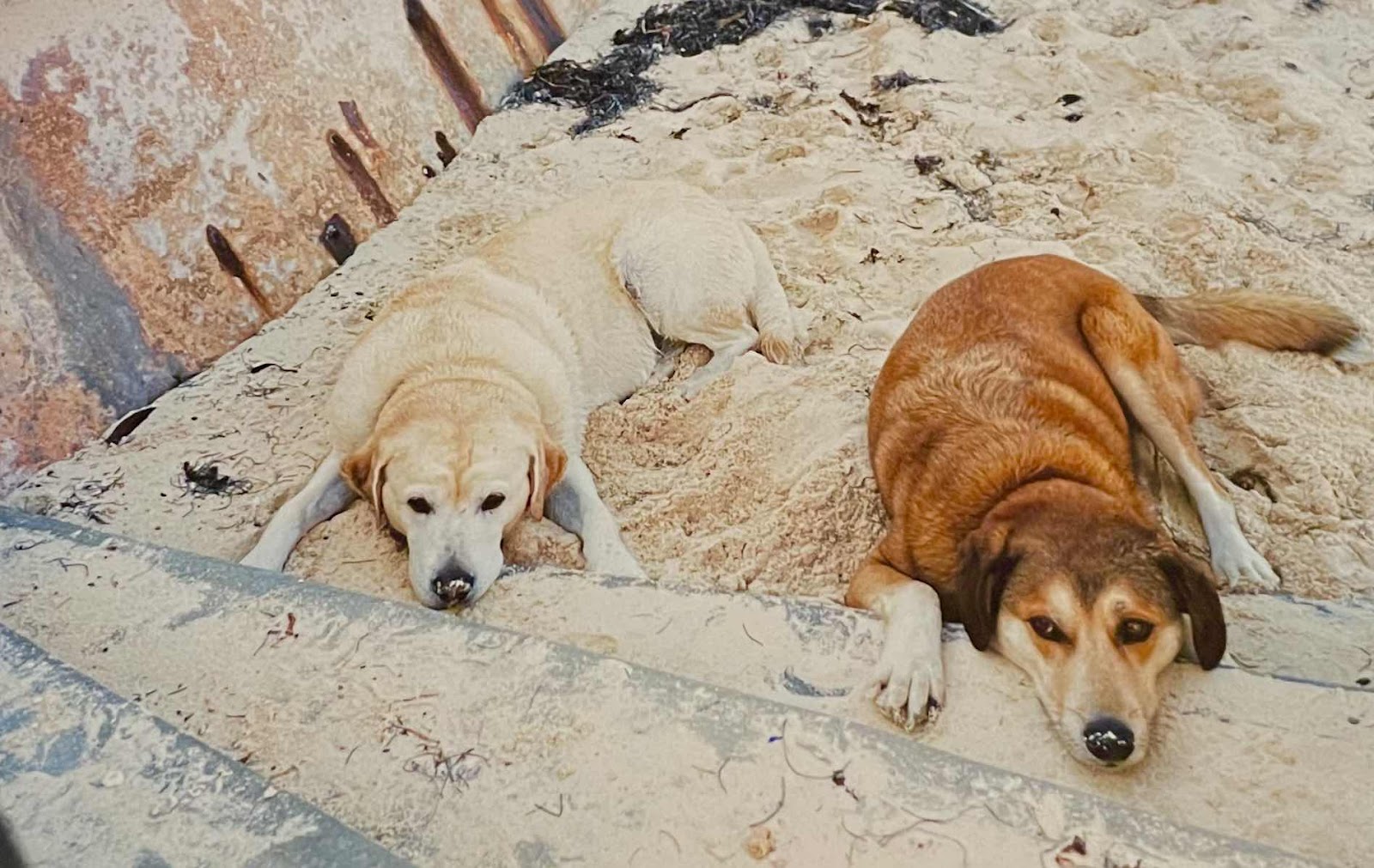 There is always fun exploring new places and new cultures and new supermarkets but one day, and I can't explain how this happens, you just wake up with the urge to move on. This place has had it's day. 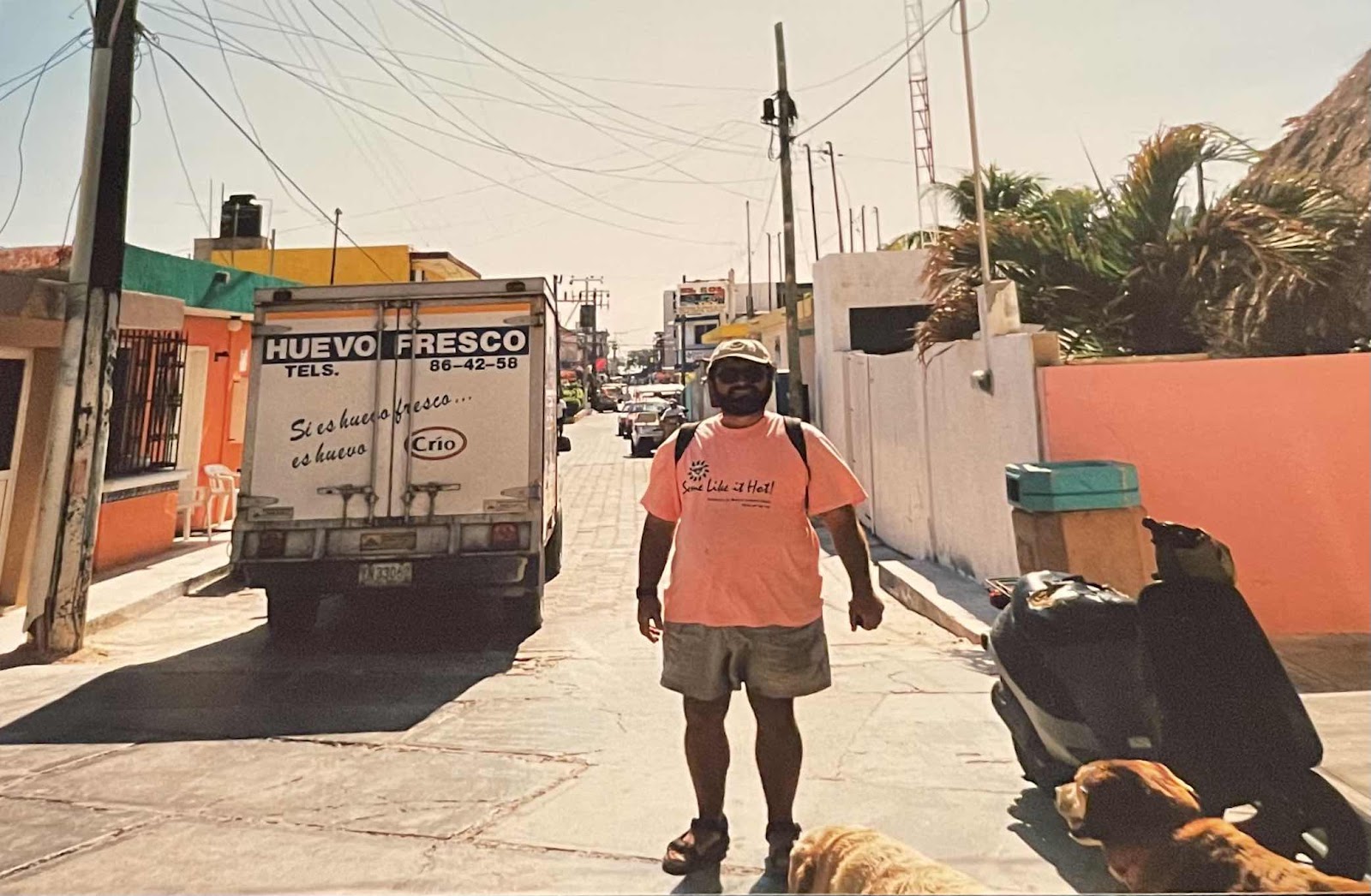 We made our pre-departure preparations, organizing food fuel and paperwork. We had a water maker onboard which turned saltwater in freshwater at the rate of a gallon and a half an hour.  That was an innovation in those days and we chose fresh water over more exotic to us navigation equipment like radar. Fresh water saved us a lot of worry and allowed us to keep the dogs as well as ourselves clean without having to hump heavy jugs of water all over the place. Very decadent. 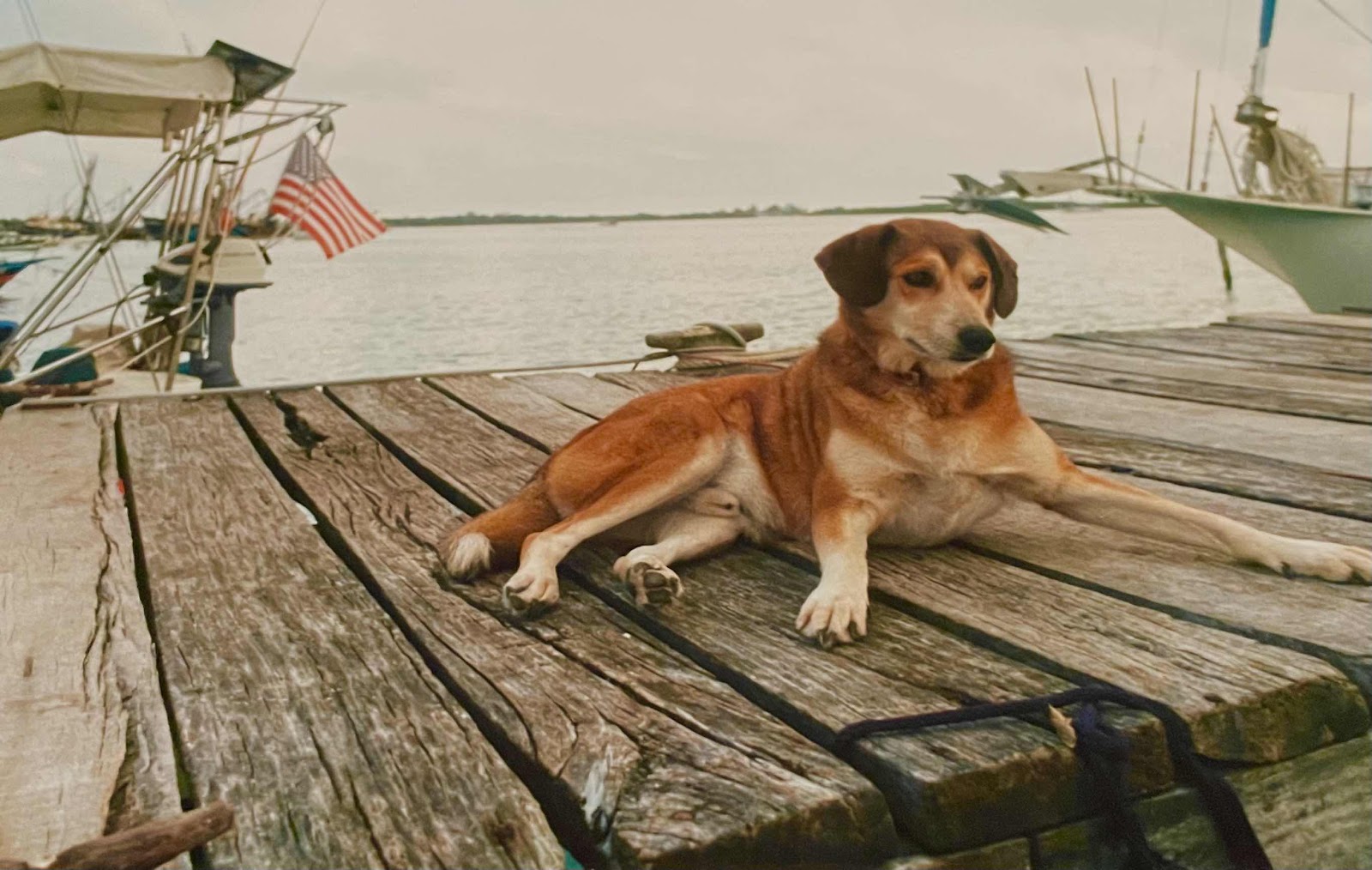 We met another couple on a similar catamaran to ours and they made their own preparations for a passage. Arlene cut Dennis's hair like the pro she was. They lived in San Diego but they loved shallow water sailing on the East Coast. We learned a lot from them as they took See Ya through shallow waters we would never otherwise have learned to enjoy. 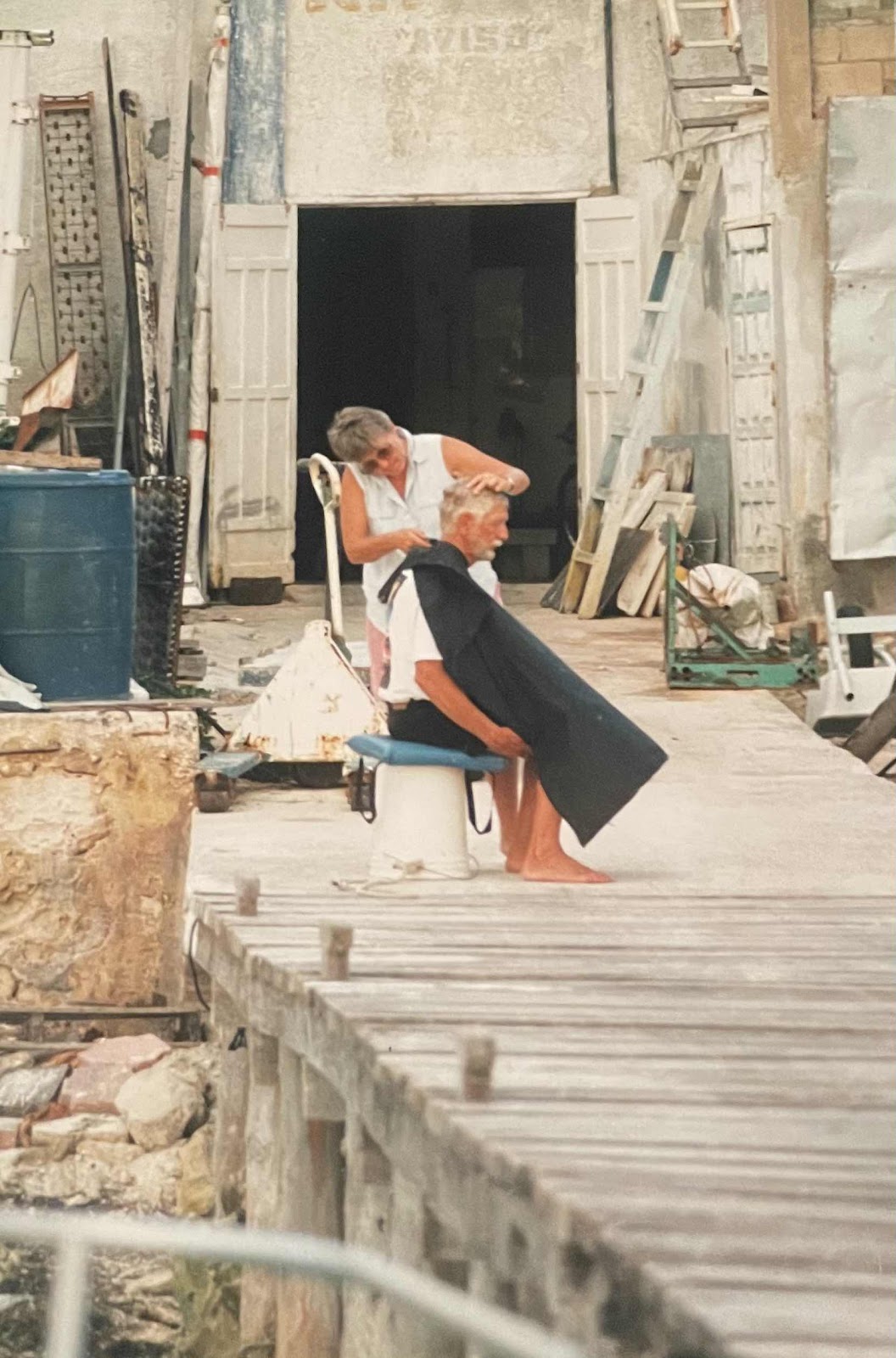 And so we took off one fine evening after one final long dog walk. I've written elsewhere of the passage that landed us in Cuba after a rather large storm caught us half way to Key West and whipped up the Gulf Stream for us. My next story will be the essay about our arrival in Key West on Valentine's Day 2000.
Posted by Conchscooter at 12:00 AM 3 comments: