From The Archives: Elgin Lane 2008

In 1801 the Seventh Earl of Elgin took pieces of marble from the Turk controlled Acropolis in Athens and had them shipped home to England. He did this while he was the British Ambassador to Constantinople because Greece was then part of the Ottoman Empire. Since 1980 Greece has claimed the Elgin Marbles as part of their heritage, but the British Museum is still hanging onto the Parthenon Sculptures, bulldog-like. And that is what I think of when I think of Elgin Lane in Key West, neither of which has anything to do with the other.... 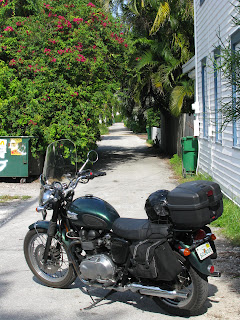 The easy way to find Elgin Lane is to cruise north on White Street until you find the brightly colored inconvenience store known as Blossoms: 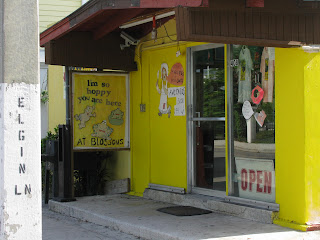 From Blossoms its a one way ride straight down Elgin Lane to a point that pops out next to Paradise Cafe a couple of blocks away. And in that stretch of narrow one way asphalt lies all the romance and intimacy of a narrow key West lane. Personally I find Elgin Lane to be unusually attractive- I'm not sure why. 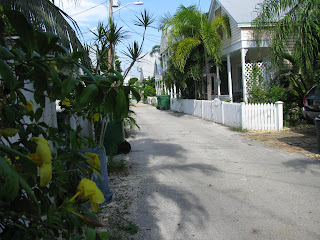 I hit it on a bright sunny day, hot but not too hot, sunny but not too sunny I suppose. Shadows were starting to lengthen and I should have been thinking about heading home. I had just been to the Tropic to check out Werner Herzog's latest documentary about life at the South Pole Encounters at the End of the Earth, a snappy title for a movie infused with Herzog's own special brand of lugubrious Teutonic hopelessness at the human condition. Which film I thoroughly enjoyed and whose somber tone was the perfect antidote to the cheerfulness inspired in me by this modest little alley. 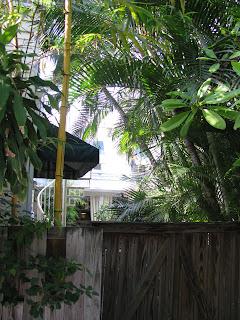 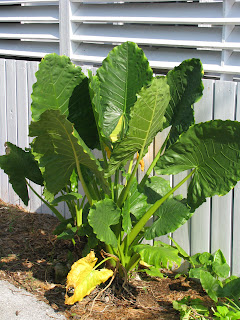 It sort of looked like rhubarb to me, but that's impossible...I'm pretty sure.

Elgin Lane distinguishes itself from other Key West streets by the impossible good manners of it's sign writers: 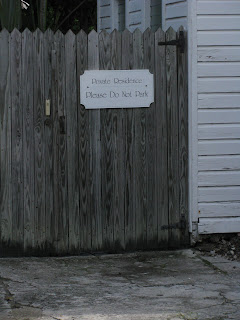 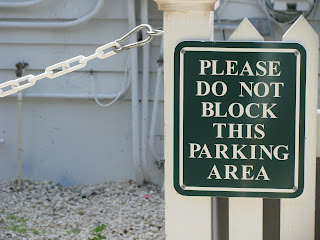 Well, most of them: 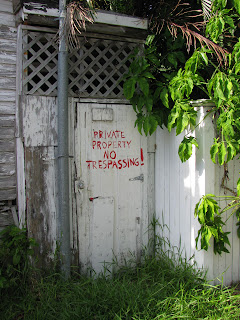 The houses on Elgin Lane are the usual mixture and included an upper crust guest house with barely glimpsed swimming hole: 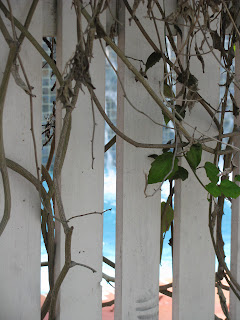 And the inevitable Conch Cottage with its own form of OSP, off street parking: 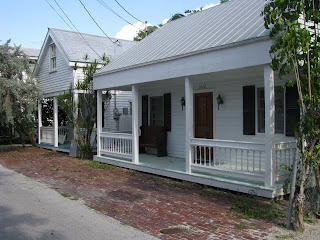 And even though I frequently see porches set up for outdoor entertainment its rare someone is out there rocking gently or playing backgammon. Perhaps it's the time of day I pass by: 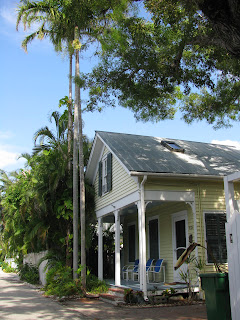 Some houses are kept full of junk, the gruesome pack rat syndrome. I could never be a pack rat, being as how I was always traveling and leaving all my stuff, perforce, behind. Not like this character who likes to live behind battlements of stuff: 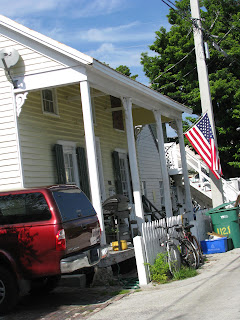 Others fight the good fight, as do I, and struggle to keep the crap factor to a minimum: 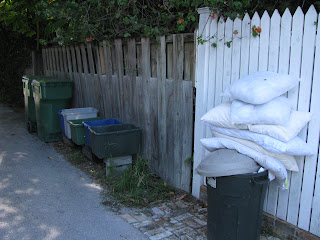 You don't even have to do much maintenance if your home is made of Dade pine: 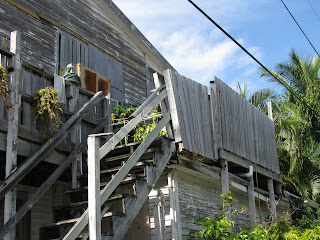 Some people are dab hands with a paint brush and pastels are the shades of choice. There is a tradition in Key West to paint outdoor ceilings a light blue color. The superstitious among us believe light blue for some unaccountable reason keeps spirits away and also has the beneficial effect they say of keeping insects away. Powerful stuff for a simple shade of blue: 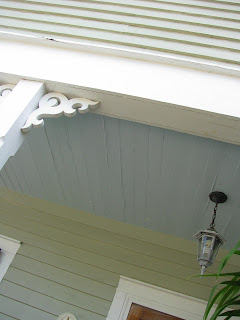 I caught one less traditional detail on a house that was all shuttered up- with a zip tie! 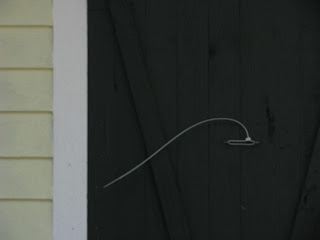 Elsewhere ingenuity was evident, the sort of lateral thinking I used to employ when I was far from land on my sailboat, not, as in this case, on a construction site: 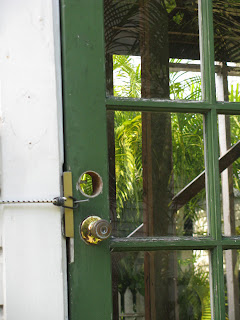 I saw another piece of whimsy in a road sign on a stretch of this narrow street: 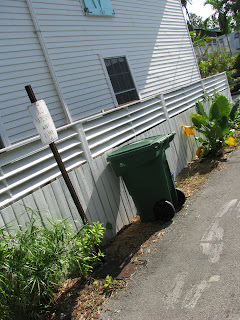 "No Parking At Any Time" says the faded sign, which seems obvious enough in this kind of area, so it didn't take but two minutes for me to spot someone doing just that! 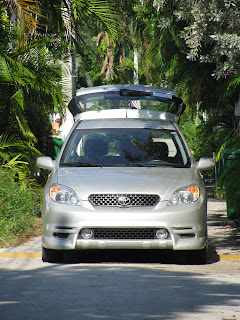 That's what they mean by "island time." Don't lose your mind when people just stop in the middle of the street- it's the response to the general lack of space.Besides if you're in a hurry there is Eaton Street, a main thoroughfare just a block away: 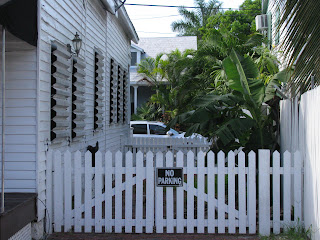 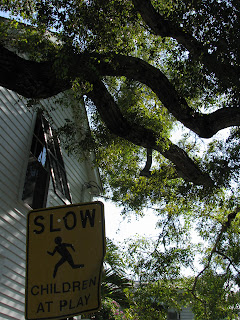 And cyclists, ready to run you down. Mind you those are always available in Key West, accidental ecologists on our streets: 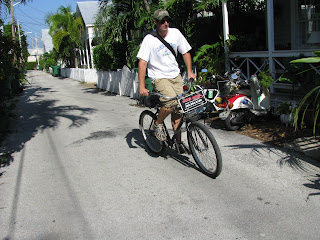 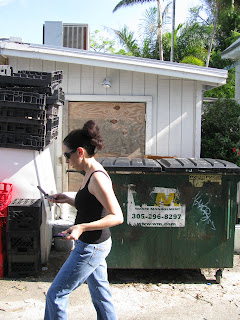 We were at a movie the other day, my wife and I, watching a Spanish movie titled Fred and Elsa, a sweet concoction about late blooming love at the Tropic Cinema and one of the characters announced, annoyed, how irritating people are who don't keep their cell phones on. I got a big jab in the ribs, but I am unrepentant. Cell phones take messages with the greatest of ease. I met another character enjoying public telephony: 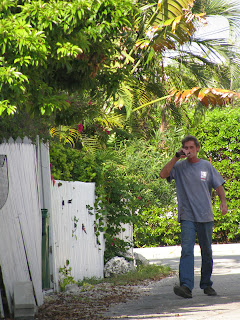 Actually no, look closely and you'll see he was sucking hard on a brown bottle. He was a pretty cheerful character as he watched me point and shoot and volunteered that his was a long time Key West family that came here from Nassau. I've been to the capital of the Bahamas a few times and it never seems to get more attractive, a run down crowded borough with all the charm of a dilapidated shopping maul tacked onto a rabbit warren of narrow streets. This character turned a tad maudlin remembering Nassau in the 1960's making it out to be paradise lost, as usual; a nice guy gifted with a defective memory. Hell the Duke of Windsor was banished there in World War Two (he had unfortunate Nazi sympathies and they had to ship him somewhere he would do no harm) and he was in despair. I don't think Nassau was much improved by the time our beer toting new found friend saw the light of day.

But I digress, once again. Another piece of Key West whimsy, a light pole growing out of a palm tree: 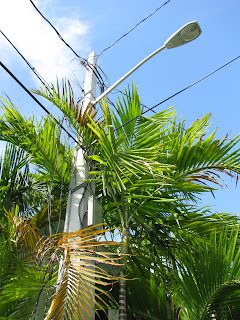 As cold starts to tighten its vise Up North I continue to enjoy Key West's primary colors, green blue and white with occasional splotches of yellow thrown in. I would rather eat worms than have to live in a place with seasons. I think that's my greatest fear if the economic melt down were to displace me, as after a life spent wandering I have finally settled in one place, a place of endless, glorious summer time. And Elgin Lane ain't half bad either: 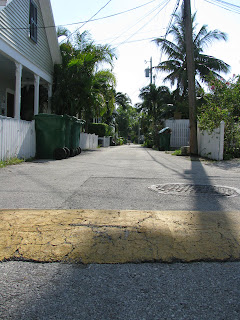 Not that I think too highly of speed bumps, but I did enjoy cruising the lane. And no, I didn't lose my marbles.

"..endless glorious summer time." Thats sounds great, Conch but today I will be carving great glorious sweeping turns on the mountain roads through the autumn trees and my Bonneville will reveal its true gracefullness again and again. I kind of feel sorry for yours, although it doesn't have to put up with winter storage it is limited to your key west roads. Riding mine on a twisty road is like a cross between a driving a Ferrari and dancing with Ginger Rogers. She turns with the slightest touch, moves effortlessly and and makes you look good at every turn. And the sound of the motor howling, well its like your favorite song. I don't know if I could trade those glorious moments for endless warmth. Hmm... ask me in January.

You should find the best of your "tourist-esque" essays and develop a tour guide out of them. Then franchise it into either a scooter tour or a walking tour. I know some enterprising individual there would happily take it as a business venture.
Saturday, October 11, 2008 at 7:32:00 AM EDT

Sal, I agree absolutely. Howeer i am alive and my Bonneville ain't,so i gets to choose! Seriously I look forward to winter and summer, both seasons and that's a first in my life. I read about people who like snow and my toes curl. I even used to hate rain, now I don't anymore. So when we travel I rent a bike for a day and ride twisties or I spend a few weeks in summer with my childhood buddy in Italy and ride the mountains...pity my tires- they never lose their chicken strips!
Jeffrey dude this is a fun thing, its my release (hence the odd economic rant), no ads, no real estate offers, just a small corner of the internet where no one wants anything from you- no donations, no quizzes, no links even! Words and pictures only for my pleasure and if anyone else wants to read them I'm happy to accomodate them. I make plenty dispatching.Weird huh? You're very kind though.
Saturday, October 11, 2008 at 11:40:00 AM EDT

Thank yo so much for todays trip. I lived on Elgin lane for several years in my stay in Key West. It was wonderfully peaceful even if you did have to park you car a block away on a main street. Why did I ever leave, oh year , my wife went crazy.

One day I will proof read the spelling before hitting send.

Blogger's spell check is feeble. I have to proof read the essay a dozen times to catch all te blunders,usually after I've published them because for some reason they are invisible frequently to me whie in edit mode. Plus you can't spell check comments.One just has to be patient and rely on the kindness of strangers reding it all...
Sunday, October 12, 2008 at 3:47:00 PM EDT

Hi Bubba, that's what we call each other if we know you real good; Or if we know ya but forgot your name or if you know a friend of ours or if your a visitor to our lil pearl.
I have been living year round behind Blossom's Deli since Sept-Oct 2010, in the 3 story building that has a view to the Gulf of Mexico.I digress.
The rat-pack crew is a husband-wife pair of marathon runners, swimmers and cyclers.
Yes, they have stuff cramming that front porch area.
They Do Sit there frequently and feed feral cats after a "turkey-call"-to-dinner on their porch daily/nightly.
They got rid of their loud, scary German Shepherds.
Charlie Duck(the ever-beer-swilling-Daily-Lane-walker/junk-collector) patrolled Elgin Lane and , jokingly became known to some, as the 'Mayor-of-Elgin Lane'.
He was well known throughout Key West and is known to have gone to high school in Key West and then joined the military , which was apparent from his, arm-swinging, marching gait with his head-up military bearing.
Otherwise, he was a character that Key West may never see again. And , true , that man knew some stories and history that he had lived through and all kinds of people from Key West's rich history of which he was one of the last, before his passing , last year,2013 in Key West.
It was printed on the front-page in the daily newspaper.
It ran as a story inclusive of many locals recollecting days past as kids playing with Charlie Duck in Key West in a much more innocent day.
As for me, my dog is telling me that she needs a walk. A long-hair dude on a walk/jog with his black n white terrier along the Palm Ave.path. Peace:-)
Thursday, May 8, 2014 at 10:59:00 PM EDT