Rain In The Everglades

Imagine this, I took for a day ride in the Everglades two months before I found Cheyenne at the SPCA. Looking back I wonder how she spent that Friday with the family that was soon to dump her. I did alright and even enjoyed the rain. From September 2009:

I had Friday off and I took the day to go on a long ride. I have been feeling a little trapped by the unwonted heat of this summer. My wife's shoulder injury has meant we cannot use our little skiff daily, so I pulled the boat from our dock and it has sat, disconsolate, on it's trailer for the summer. I determined I had to go for a ride, so I gave myself an unreasonable goal and decided I would ride there and back and see how I coped. 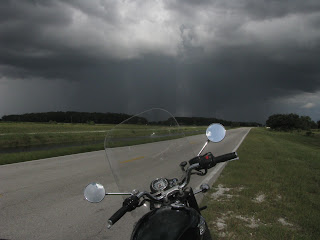 The day went well on the whole, I arrived where I wanted to go and I managed to avoid all but the lightest of showers as I crossed the Everglades. In addition to a severe shortage of breezes we have enjoyed a surfeit of showers this long hot summer and I fully expected to be rained upon. As can bee seen from the photo above, I met my Waterloo on Snake Road in the Seminole Indian Reservation. It was to be the highlight of an excellent day. 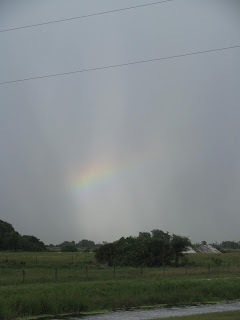 I pulled over to enjoy a spectacle I had not yet seen in a thundercloud. It was like a white blaze in a gray head of hair, and there were elements of a rainbow within the splash of white in the rain storm. Of course my attempts to photograph the phenomenon fell far short of what I saw with my own eyes: 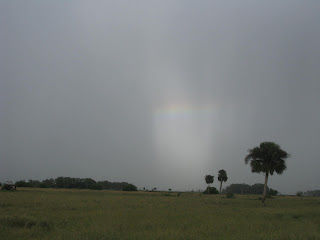 The temperature gauge had been hovering above 100 degrees all day (38C) and i was sweating in my helmet and my gloves and my waistband all day. The thunderhead was producing a phenomenon that Iwas used to, a down draft of cold air that rush across the fields and bent the leaves on the bushes and the scrub palmettos. When out sailing that rush of cold air was my first warning to shorten sail, especially at night when I couldn't see the black anvil in the sky that was producing it. Standing next to my motorcycle I just grinned and sniffed the cold air like a city-dwelling child first exposed to the ozone of fresh salt air. The rain was thick and blotting out landmarks across the fields: 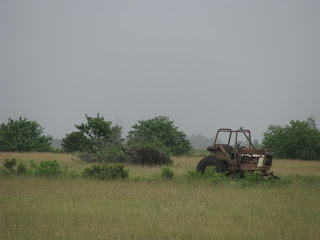 Rain spattered and I turned and fled, thinking perhaps to return to the U Save gas station in the Seminole village where I could buy a coke and sit at a table on the porch and wait for the rain to pass. As it happened I had noticed a corral as I rode and as I thought about it I figured that if i stopped there I could shelter my motorcycle and also probably not have to talk to anyone. I had a thermos of hot tea and a book I have been enjoying (Hitler's Pope, a biography of Pius XII, which is not nearly as dry as it sounds) in my saddlebag and I would take advantage of the pause to do some reading. 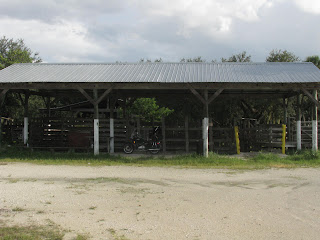 It is commonplace these days for riders to load up with music and GPS and blue toothed cell phones that allow one to be distracted by almost as many electrons as the average car driver. I am not one of those, I continue the practice of enjoying my thoughts while I ride. Partly I hope to ride with greater care, partly I enjoy listening to the silence and thinking thoughts as I barrel down the long straight stretches of Florida back country. To thus have to pause and refresh the memory banks with new thoughts is a chance not to be missed. 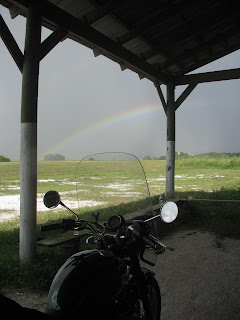 I could tell this thunder head was special. The edges were blurry, the heart was black and it spread so wide the edges produced rainbows even as it advanced on me. So thick did it look down the road, and so strong were the down drafts, I figured it was prudent to leave my waterproofs in the other saddlebag and take the opportunity to stay dry. I was at least four hours, possibly more from home and I wanted to stay dry as darkness was two hours away and my blood is so thin that riding wet, in the darkness in 80 degree (27C) ambient temperatures could set my teeth to chattering. 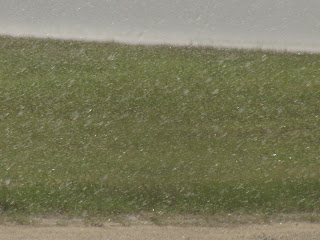 It's not easy to photograph rain I find but I had lots of time to try to perfect the technique. The wind howled, sending raindrops horizontally under the roof. The the thunder clapped so loud my teeth ached and I wondered if the zinc roof would act as a lightning conductor. I retreated to the interior of the corral and hid behind the slats trying to stay dry. And the rain came down. 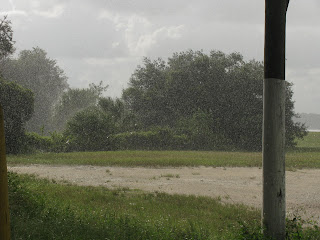 It bent the leaves of the trees and shook the branches with it's force. The sound was the hissing of a dozen steam locomotives, the very air was damp with rain, even at the center of my shelter. 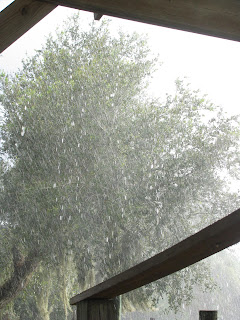 There was a viciousness to the rain, it felt like it was pounding the ground into submission. The wind stopped and left the rain to do it's worst and like a guard dog released by it's master the rain hammered and worried and tore in a frenzy, trying to do as much damage as time allowed. How this neighboring roof stood up to the assault I don't know. Them Seminoles know how to build a strong roof, they do. 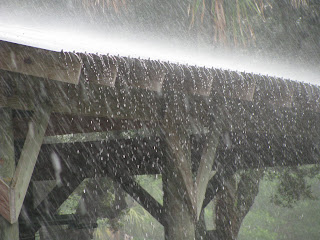 Well, I thought, I made the correct decision. Tea, anyone? 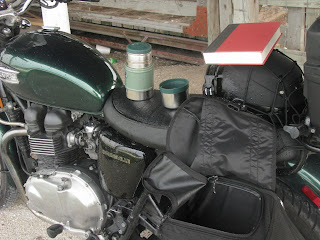 It was undignified I know, using the motorbike as a table, but the little folding chair thoughtfully left behind by the stock man (thank you, whoever you are) was the perfect height to allow me to read and drink tea with the minimum of effort. 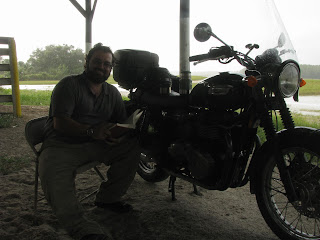 And so time passed. I knew that if I had togged up and continued the ride would have been not much fun. Rain of this intensity would have penetrated my plastic clothing at strategic spots and anyone who tells you riding with a soppy crotch and a wet chest is fun are lying. It would have been a challenge, of that there is no doubt, but I met the challenge my way and it went well. Indeed I was reluctant to put the book down. I had got to the bit where the Vatican made no comment on the "Night of the Long Knives" and I was wondering what the author had found on that subject in the Vatican archives. 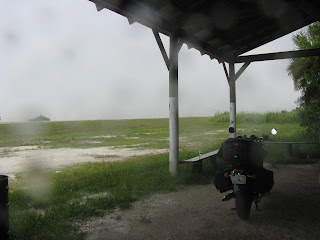 The rain was easing up but as long as I could see spray shooting out from under the passing vehicles I decided to stay put. Either that or put my plastic pants on to keep dry and sweaty. 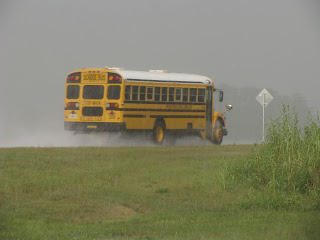 The cars drove by in a steady stream and I didn't envy them their mobility. They had no conscious moment of this storm, just another wet view through the window. For me it had been a calculated risk, a well thought out decision, a maneuver to keep me dry. An hour spent here was an hour that would live on in my memories for a good long while. "Remember when...?" 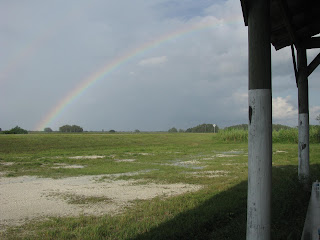 As we age our lives speed up because so much of our older lifetime is repetition. Routine creates fog in the memories, the same photographs taken over and over get filed in one place. New pictures merit a special look and a thought or two. That takes time, and the time taken is added to the bank of life well lived. 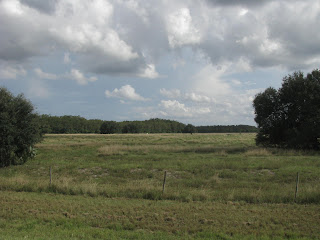 I do like the perpetual sunshine though, and it got a particular applause from me as the cloud moved off to ravage some other place and left me to pack up and ride out in a world made fresh and clean by the rain. A Seminole police car slowed to look at me lurking in the corral as I was running my eye over the bike making sure everything was as it should be. He didn't stop to talk, perhaps he got a call of something more urgent than a motorcyclist taking refuge from the rain. I thus managed to hide out for the storm and spoke to no one about anything making the moment all mine. 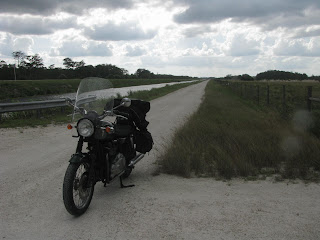 Mine and the Bonneville's of course, for what would Timmy be without the dog?