This was not what I expected when we turned off the main road, and started driving confidently into the narrow valley off the main road from Gorazde. We were on our way to Sarajevo, but my mind was full of the civil war that had ended 12 years ago and I could clearly see a narrow winding strip of white on the map, a road that led to Pale, the former capital of the breakaway Republica Srpska,the homeland desired by the formerly genocidal Serbs. 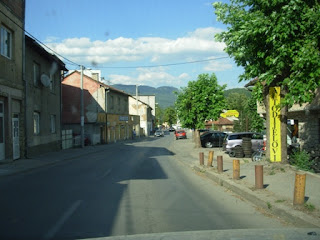 Gorazde, seen above, was a Bosnian-Muslim outpost surrounded by Serbs in the civil war, but nowadays bolstered by European Union money it is a prosperous little town on a sunny July afternoon.

The road we were on was not following the dictates of the map and it was deteriorating rapidly into little more than a goat track. We climbed up the valley on a narrow twisting road. The sun made itself visible shining on the greenery high up the granite walls of the valley but down on the road we were deep in shadow.

We came to a steel bridge crossing the river, a fast flowing, boulder-strewn cut through the mountains. The bridge had seen some rough use and the metal plates were buckled in an abstract, interesting way. I plunged onto it lest we start thinking too hard and the heavily laden station wagon bounced as the wheels dropped into a cleft between the plates.

"Er, " Layne gurgled as the car lurched. I kept driving, it was too late now. We scrambled off the end of the bridge onto the roadway and I focused on the fact that other vehicles must use this structure too...

We passed a logging mill, wood piled up outside a classic stone and brick Balkan house with a pointy red tile roof and the road that wound close past the front door. A boy sat on a stack of fresh planks, a dog licked its paws and ignored us as we droned past. The trees closed in and the road waggled its way along the edge of the river. Until we reached the gate.

Somehow we had found some sort of power station, possibly a hydro-electric plant or something, nestled in the woods, guarded by a lonely man in a sentry booth. He let us turn around and when I asked : "Pale?" (In the local lingo pronounced "Pah- lay?") he replied in rapid fire Bosniak and I understood nothing except his hand pointing backwards.

It all came clear as we turned in the parking lot of the power station and headed back to the mill. There we noticed a little cardboard sign, hand written: "Pale Something" which I took to mean "Pale this Way" in cardboard English. We looked at each other and, saying nothing, I turned the wheel and our eager Ford Fusion scrambled up the bank onto the narrow dirt road. 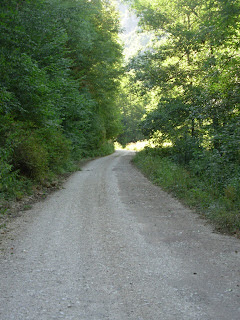 At least, it looked like a road, at first; then we met this... 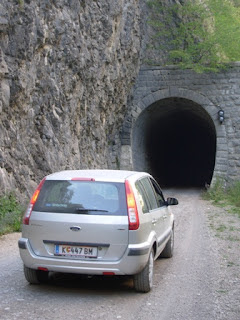 And then the penny dropped. This was a railroad line and apparently long disused by the trains but still in use as a road. Weird! Cool! We're on the road to Pale. Not waiting for my wife's radiating disapproval to slow us down I kept my foot on the gas and we rumbled into the tunnel.


The first one was a short one and that made it easier to get into the second one which also was short and we could see daylight seconds after starting into the gloom. The third tunnel was much longer, and darker and damper. It gave me shivers as we penetrated the darkness with tendrils of damp sliding down the walls, potholes large enough to reduce our speed to a slow walk and barely enough width to allow us to open a door and get out. that I figured would be a killer if we got a flat... 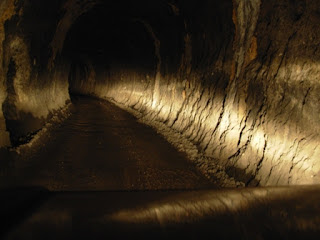 "What if we meet someone coming the other way?" my wife asked with a half giggle.

"Buggered if I know," I muttered, swinging wide to avoid a hole of particular dimensions. "Lets hope they know how to back." We kept on rumbling, the diesel engine growling in low gear.
"What's that?" she said, cocking her head.

"That, " I said with a sinking feeling , " is our opportunity to figure out who knows how best to back up."

Suddenly their headlights were upon us. A moped lurched out of the darkness and without waiting for me to engage reverse streamed past my door and buzzed out of sight towards the light. Like we weren't even there. Which would have been okay if there wasn't a compact car following close behind him.

I sighed and twisted in my seat and started backing.


I must have gone 50 yards and I'm proud to note without faltering. We pulled to one side and the graceless hulks inside the car flashed us a glare that said if looks could kill we would have been incinerated, and in a flash they were gone, my friendly wave frozen in mid air as though petrified. 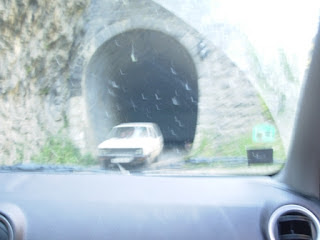 And so we gave it a second shot, this time with complete success we popped out at the other end of a tunnel that curved in the middle and must have been 200 yards long, at least. maybe more. it felt longer, I will say that.

The road to Pale came out of the tunnel and coasted alongside the river for a distance, dappled sunlight playing on the trees overhead, the mountain looming over us and still cutting off the lowering sun, for it was close to 6 pm as we drove along the railbed. 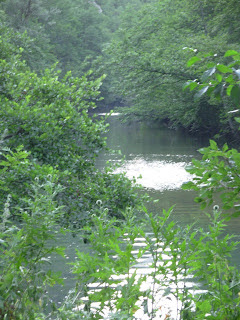 "Does this seem like a good idea?" My wife asked after a couple of minutes of silence.
"Umm," I replied. The thought had been occurring to me that we might not be headed towards anything good. Pale had been home to the gruesome killers of Ratko Mladic, the "hero" of the Bosnian-Serb militias. These were the people famous for the slaughter of Srebrenica and the torture by sniper fire over Sarajevo. Pale was their headquarters where they planned the reduction of the Bosnian Muslim capital city. As we bounced along the railroad track with no end in sight ( another quick tunnel) I was mulling over the wisdom of following this trail to nowhere.

I imagined us arriving in some Carmen-like bandit camp high in the mountains and stepping out of our Austrian registered car with weak smiles on our faces and then being lost forever to the rest of humanity. Just two more mounds of dirt in a country littered still with mass graves. It was not a pleasant picture.

"Do you think we should turn back?" I asked.
"Only if you do," she temporized.
"Um, " I temporized.
This trail had probably been pressed into service during the war to connect Pale to the rest of the Serb-held Western Bosnia. Now it was probably just a short-cut across the mountains for a few hardcore people who really want the Federation of Bosnia Herzegovina split into two, or three parts.

In any event we stopped, we took pictures, we turned around. I was ready to not keep going, we knew the rail bed went somewhere, and we didn't want to arrive in the dark, or get stuck in the dark and Pale was there somewhere ahead, on a proper paved road, I was pretty sure. This track led to Pale but through God knows who's back yard.

The relief in the Ford was palpable as we back'ed and forth'ed and got facing the way we'd come.
"I expect those guys who passed us called ahead and now the bandits are waiting for us."
"Long wait," I said. We passed the long tunnel, and two more and finally found the sawmill, dropped onto the pavement, crossed the funky bridge , went back down the valley, turned left on the main road away from Gorazde and took the long way round the mountain. Pale was easily accessible by main road and a drab, down-at-heel town it was too, about as threatening as a page from a history book. 'The banality of evil' was all I could think as I checked the Soviet style apartment blocks and the hurrying hunched pedestrians on their way to nowhere. We drove through, not stopping, and went on our way to Sarajevo and a night in America at the Holiday Inn. We wanted service with a smile and a pretense that outside the door lay midwestern suburbia in all its unthreatening glory. We got a Lego building inhabited by surly Slavs instead. The good ole USA was still a long way away. 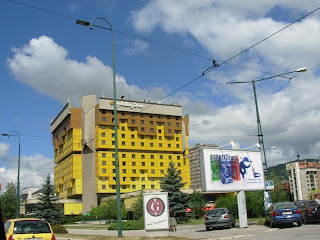 We were a little tired and stressed by the Balkans at this point.
Posted by Conchscooter at 12:01 AM No comments: Links to this post