Last year the Citizen reports the city paid to have tons of sand dumped onto Smathers Beach, seventeen thousand five hundred tons of grains to be precise. This is a regular feature of tourist life in Key West, bringing sand by barge from the Bahamas, which islands are over endowed with the stuff, and dumping it anywhere tourists expect to find it. As odd as it may sound there are still a few million people left in the US who come to the Keys for their beaches. The Internet is a great tool but expecting people to use it to get informed is a little much. In order to reduce disappointment the city is going to spend several hundred thousand dollars to keep putting sand this year on a beach designed by Nature to suck it back out to sea. So important is this Canute-like effort the Chamber of Commerce, an organ that regularly calls for reductions in wages among the city's working class, is chipping in a few hundred thousand of its own to keep the tourists misinformed about the quality of Keys beaches. All of this is weird but absolutely true. 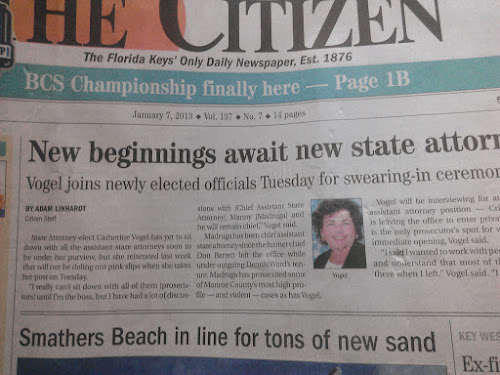 A small picture on the same page shows a cheerful smiling middle aged woman and she should be happy because a recent election brought her back to Key West from exile in Central Florida, as Ocala is where Key West natives go to live when the cost of living gets too much on the island. Catherine Vogel knocked the incumbent out of office in the Democratic primary and has been sworn in as the county's new chief prosecutor known in Florida as a State Attorney. Driving past the Sheriff's headquarters on College Road on north Stock Island (part of the city of Key West as it turns out) we see a new Sheriff posted on the signpost. They didn't waste a minute- he was sworn in the afternoon before and Bob Perryam is history, buried and gone, retired after four quiet years in the highest county law enforcement office. 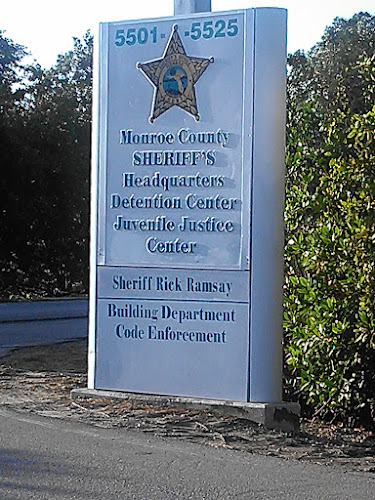 After years as second in command Ramsay got a massive picture on the front page of the paper when he got sworn in as top dog after an election giving him two thirds of the vote. I am a skeptical soul by nature, and the number of notes I get requesting pictures of tits and ass annoys me. But it seems sex sells, or at least I've heard that rumor. The Citizen has too, as you will notice our unmarried new Sheriff had his bible held by his photogenic friend in the sundress. So, ask yourself why the Awesomely Powerful state attorney doesn't get a photographer but the buzz cut Sheriff does. 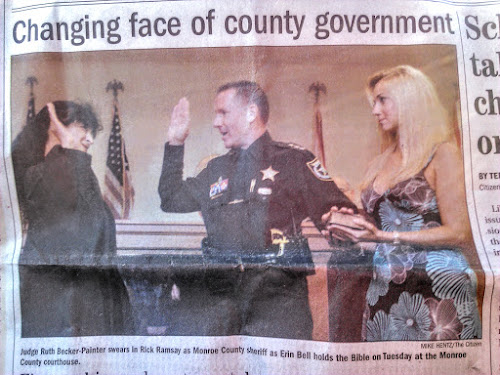 Best of all I saw this bumper sticker currying favor on a car registered in New England of all places. Isn't it funny how non residents want to claim the privilege of residence without the daily aggravation. If this car's owner cast a vote for Ramsay this car is illegally registered, officer. If they didn't cast a vote why is it sporting a sticker relating to our election? Bugger off and get your own. 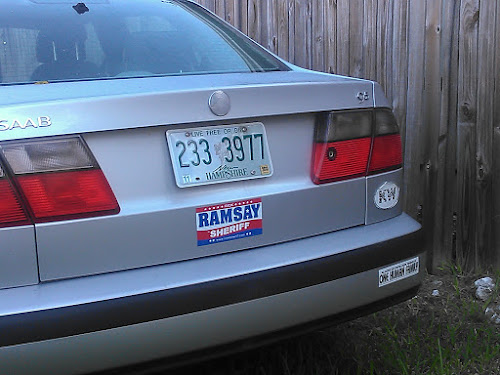 Ah well, this is all small stuff. I wonder what on earth there will be to watch in the weeks ahead. Do you suppose I might end up living in a county with a serious, ponderous stereotypically married sheriff? Some sort of Andy Griffiths type dispensing folk wisdom with a crooked grin? Nah, no chance, Monroe County is too modern. Key West is too, far too modern. I like to tell people I can only live in a city where my boss the police chief is gay and far out of the closet. Find that combination in New Hampshire if you can. Then show me the bumper sticker for my Florida registered motorcycle.