I don't know what it is but every damned time the temperature drops to sixty I get a head cold. This time around it hasn't been too bad but for a couple of days I was snuffling and hacking and wandering around gloomily like the ghost of Hamlet's father. But all bad things come to an end especially after your attentive wife doses you with Chinese pill called Yin Chiao, along with modern American remedies Theraflu and Allegra which is Italian for "happy woman" oddly enough, and whose brand name sent my over active brain into a spin when I found I was swallowing a Happy Pill. The only true source of happiness comes in a hundred pound bundle of fur, not in a bottle of pills. 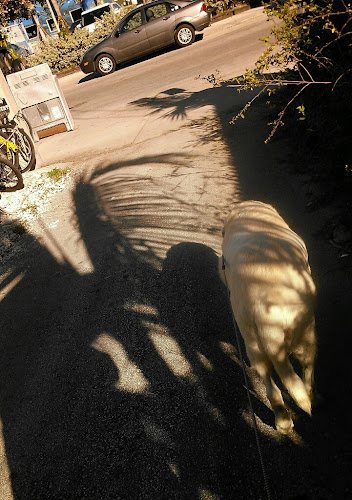 You should have seen Cheyenne when I parked the car in Key West in the early dawn grayness and she stood looking at me with a giant shit-eating grin, her tail circling like a slow motion propellor. She loves her Key West walks and when she got out of the car she knew where she was. We set out from James Street she with her nose down me with my phone/camera firmly in my pocket. I thought I wasn't in the mood for picture taking but it didn't take long for Key West to wake me up. A lot of people love the Half Shell Raw Bar, not surprising as it's a funky dive right on the water and what visitor doesn't dream of seafood on the water in a place like this? Just as well really as I ate here once with some friends after a day on the water and I seem to recall it was okay. 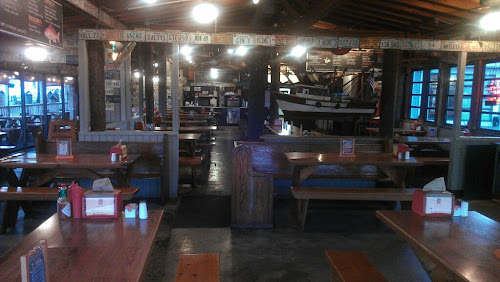 I saw this sign outside and out came my Android once again. It's a first for me: No Geocaching! The cemetery has a sign forbidding letter boxing which I believe is the same thing, but I suppose Key West Bait and Tackle has had enough of people using them as a landmark. Strange obsession, geocaching, stranger still to forbid it. 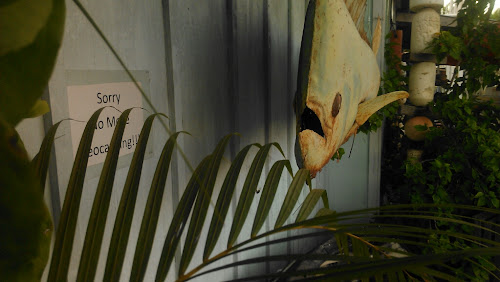 Then I found this sign and I spent a good part of the three-hour walk asking myself what a Gay and Lesbian Bed and Breakfast might be, never mind an award winning one. There was a time when many of these places were ready to take only gay clientele but that was a long time ago. The rest of the country is slowly catching up to Key West and a few other select gay-friendly cities so the whole exclusive gay thing is fading. Not only that, but there are also a lot more gay friendly hubs that are a lot cheaper than Key West or Provincetown or West Hollywood...but those awards keep coming! Award winning indeed, though more importantly I have heard this is a good place to stay. Not that I know, I live here and I'm straight. Strike two. Oh well. 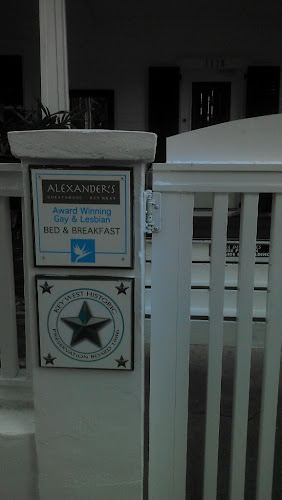 That other symbol of Key West is the hammock. I had lunch Sunday with an out of town visitor and while she lamented the state of my sinuses she suggested an afternoon lounging in a hammock under the warm February sun. Maybe it's time I bought myself a hammock? There's even a store on Duval that does nothing but sell hammocks...on the other hand they are a bit of a pain to deal with, requiring you to bend double and balance to get in them, and then I am an obsessive rocker so it's probably not that great for me as I would be focusing on going back and forth and not on relaxing. 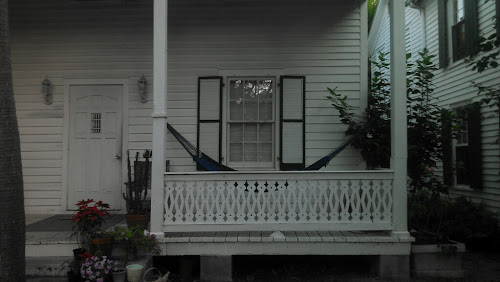 Then we were on Fleming and at the Eden House, an all-comers welcome guest house, I saw a picture of a penny farthing used to represent all bicycles which I thought was rather cute. Most as you can see have two wheels of similar size: 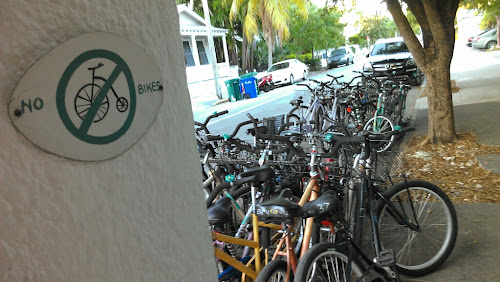 As we wandered down Eaton Street it dawned on me slowly that this might be garbage collection day, as I'm pretty perceptive. The sidewalk was a real slalom of cans and it struck me how much waste we as a society generate. Look at them all... 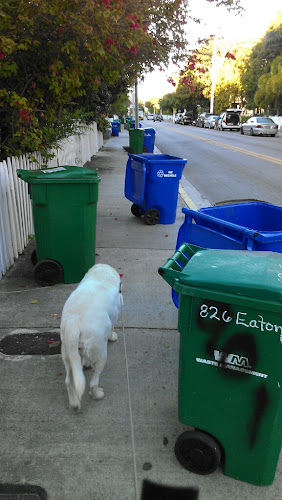 Cheyenne does her part to clean up where she can. No wonder she loves walking Old Town Key West. 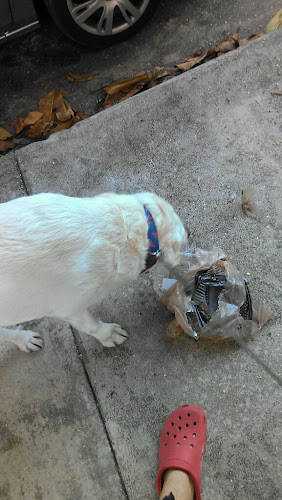 The blue cans are the new recycling bins, replacing the yellow topped cans which were deemed too ugly. And no matter what the color, recycling is a work in progress in this town. The rules of recycling seem to still be a mystery to most people. 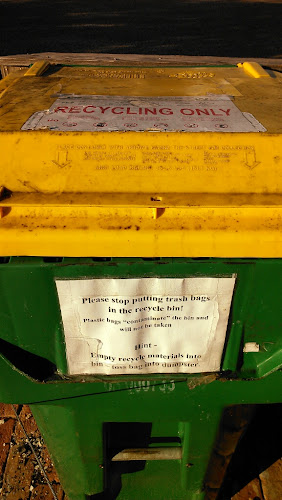 Welcome to Key West, now pay! If you overstay your welcome in a parking lot they love to leave their mark on your car. Booted until you pay the overage, and believe me when the visitors find this the first thing they do is dial 911 to get an officer to explain the charges. I like that my job ends when I send them the cops. I'd go nuts trying yo mediate between angry people. I love my job luckily, but not many people seem to think much of dispatching. 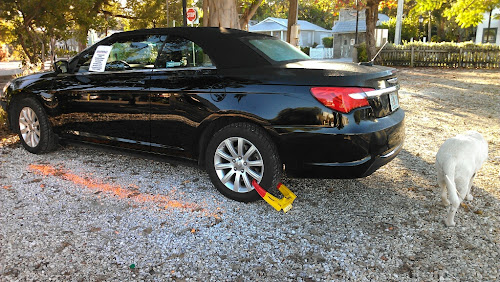 This dude found a clever little spot to pass out in, behind a fence under a bush. I laughed when I nearly stuck my face in his cap as I looked got my errant dog on the end of her taut leash. He never noticed a thing! 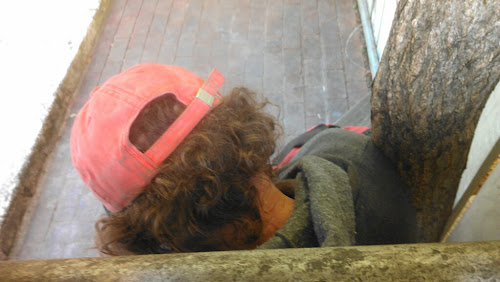 This extraordinary sign advertises what exactly? Turds or cigars? Some people might argue there's no difference but I actually don't mind cigar smoke. I loathe cigarettes and all their chemical additives but even though I don't smoke anything I don't mind cigars. I like to think its because they are just dried leaves, not adulterated like cigarettes. The flying turd shop. 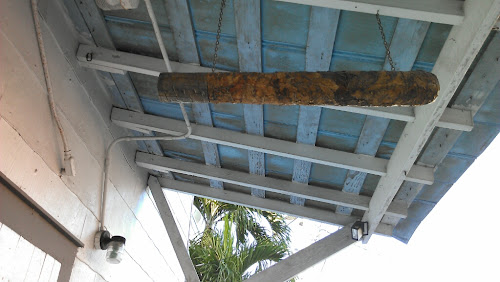 This bicycle outside the Chamber of Commerce at Old City Hall made me smile. All the no parking signs in the world don't mean a thing to people even when there's an empty bike rack ten feet away. Who knows, maybe it's an employee's or perhaps the rack was full, who knows. 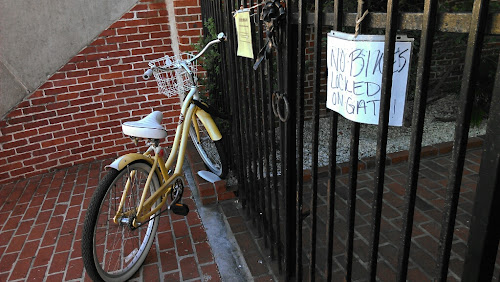 It's like this No Parking sign and the covered box parked in apparent defiance of it. Signs in Key West aren't meant for people that know what's actually going on, so just because you see a weird parking situation don't imitate them. 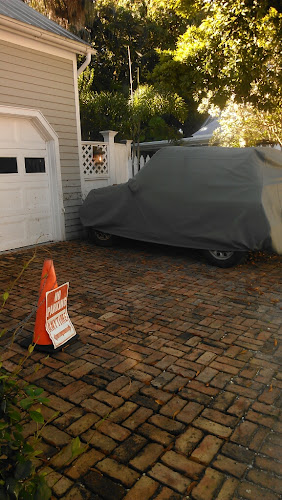 I am not fond of the stupid t-shirts and signs sold downtown but then I saw this one. It speaks to the misanthrope in all of us, especially me. I wish I could put one on the office door at work. 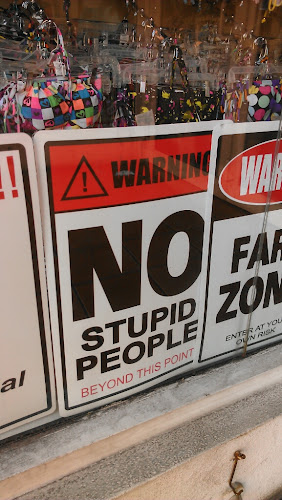 Early morning Key West looks so different from the lunch time, afternoon and evening crowded streets. I like it like this, no doubt because I'm not a businessman. 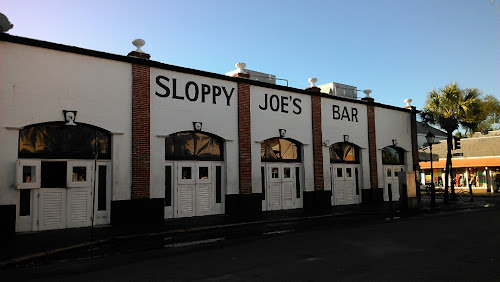 This was a good walk, confirmed by the fact that when I got her home she slept off the effects of the three hour walk for the rest of the day. 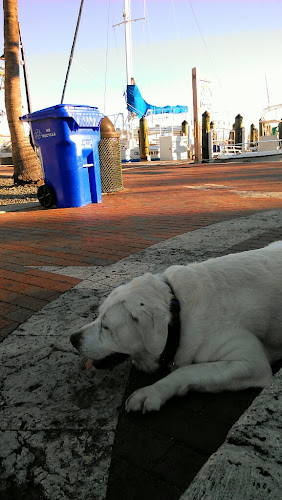 Deep content snores, make the walk even more worthwhile. I like strolling Old Town anyway but making her happy makes it even better.

Posted with Blogsy
Posted by Conchscooter at 12:28 PM 2 comments: