Sometimes driving Highway One  by  day is not the sunny  bright, daylight  filled experience it is most of the time. Summer thunderstorms descend and the roadway plunges into unnatural darkness brought on by the fury of nature. Great  stuff. 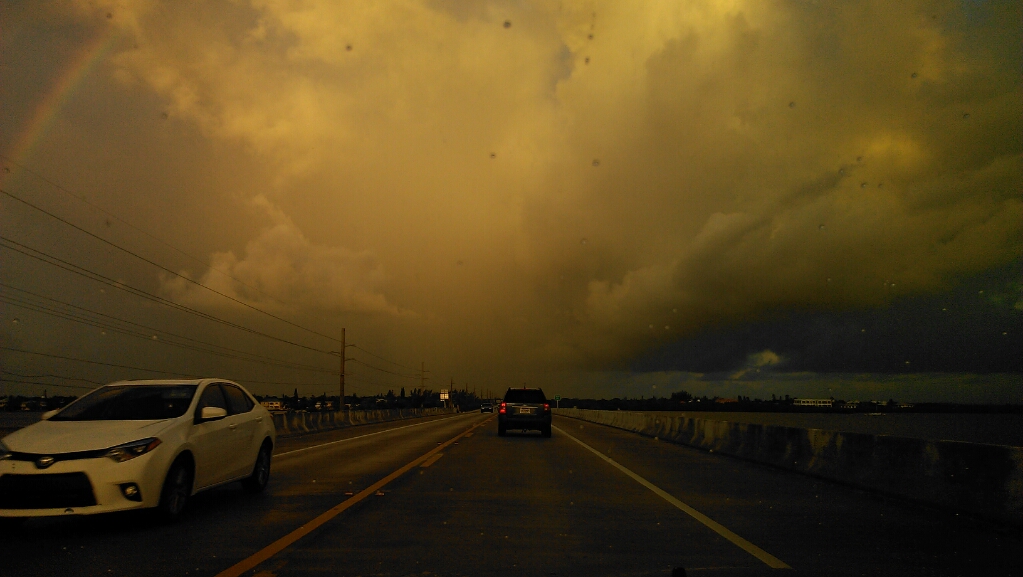 Then again as I prepare for work I usually get to see at least a  bit of the setting sun, depending on the time of year. Then it's off to work I go. Tuesdays though are different. 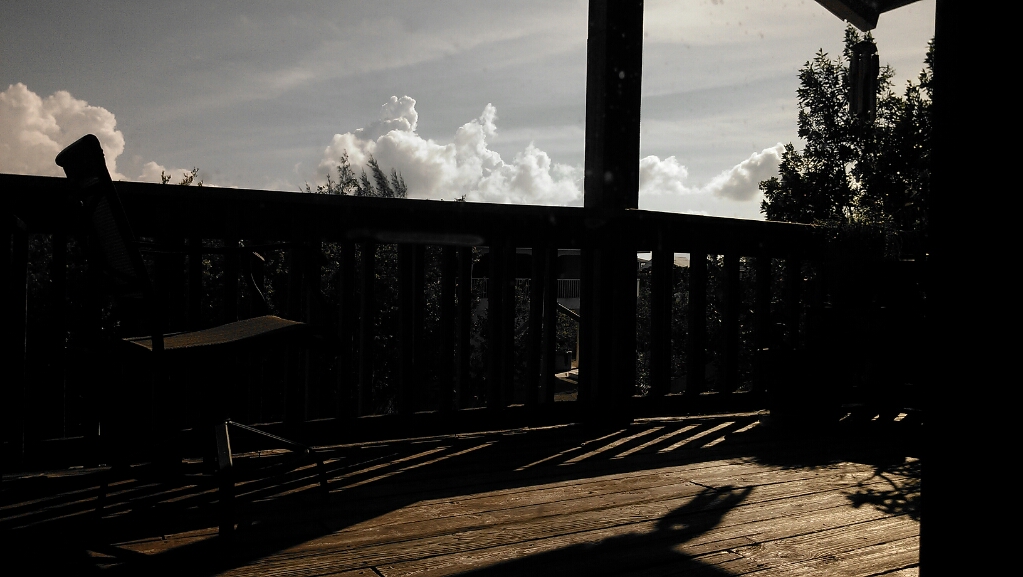 I work three twelve hour shifts every week and make up the full forty with a four hour shift each Tuesday. I work the most complicated schedule in the world to explain to an uncaring uncomprehending audience but suffice it to say everything I do on Bravo Nights my corresponding shift Alpha Nights does the opposite. Thus one Tuesday I work 10 pm to 2 am and the next Tuesday I work 2 am to six am. That is the most hated night shift of all. There's nothing quite like getting out of bed at one in the morning. pulling on shirt and pants in a silent dark house (the deep rumblings of a snoring Labrador count as silence in my home) and tip toeing out into the night. Were there snow on the ground or fog shrouding the trees I'd probably quit and find another job. Happily around here its usually just another hot sticky night in summer and occasionally cool night in winter. 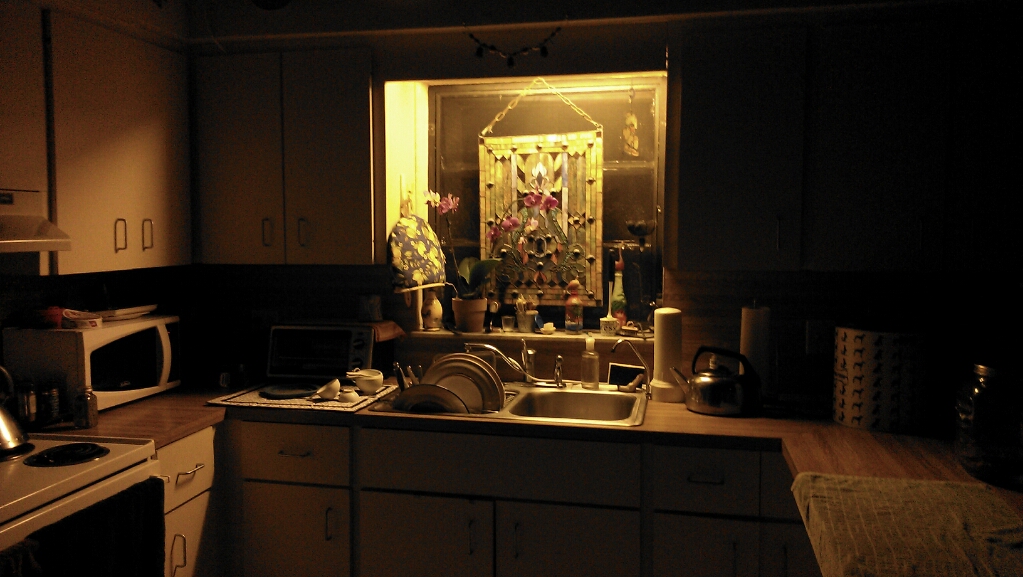 I rarely take the car, unless I am feeling under the weather or tired and unfocused; I always ride. I carry waterproofs in case of a sudden downpour but I'm most worried about getting wet going as I don't want to sit in air conditioning for the night in wet clothes...coming home I usually just press on and laugh maniacally as the cold water seeps into my armpits and up my trouser legs. So, Vespa or Triumph? The Vespa is more fun as it tops out at 65mph in a tailwind and requires much more finesse to pass slow moving cars, but it does have the bonus of making car drivers weep with vexation when they get passed by an old hairy hobbit on a moped. The Bonneville eats zombies in cars for breakfast - no fair. 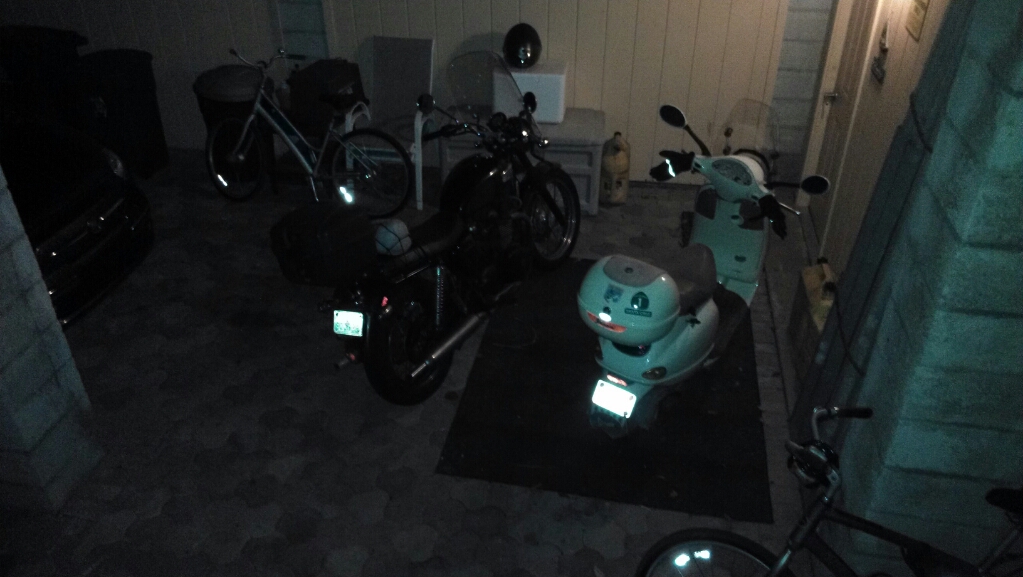 Loud mufflers are never a bonus in my world where I prefer to move unobtrusively without pissing off my neighbors at1:15am and without warning the constabulary of my impending approach. The notion that loud mufflers save lives is akin to expecting zombie car drivers, focused on anything but their driving, to notice you in high visibility clothing. My formula is to pay attention and expect them to behave idiotically and unpredictably. So far, so good. Oh and stop at the stop signs and use your turn signals. 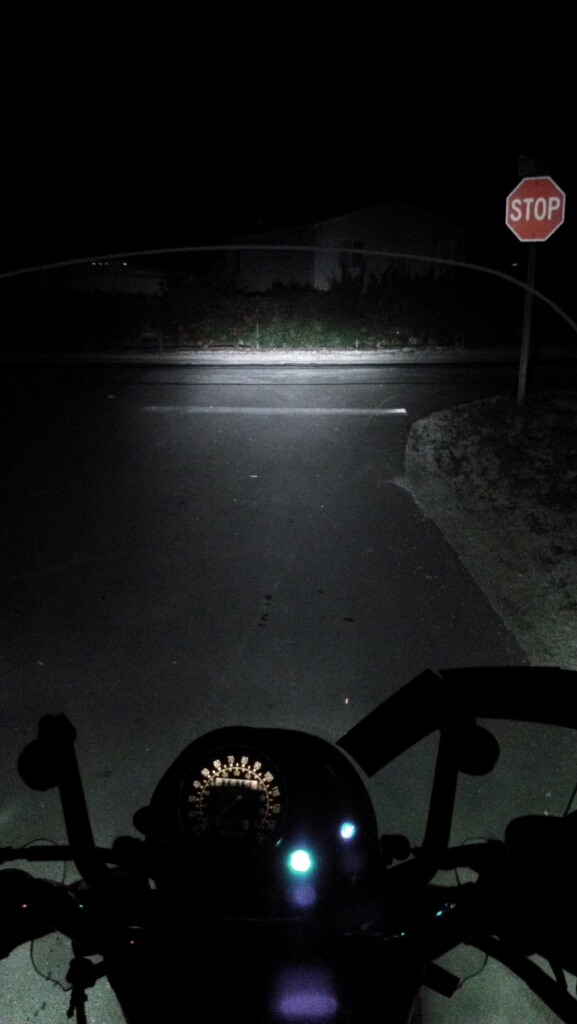 The thing about commuting the Overseas Highway is that this one single cause way is the sole connector between islands, communities, jobs, dog parks, restaurants and the post office. For some people its a lovely scenic amble as it crosses expanses of turquoise water under bright sunshine. For others it is a the vital connector to get to work and ambling is about as far from their consciousness as to be indiscernible. Therefore one can get quite frustrated by drivers who think island time is real. Island time would be fantastic when I get to work and tell the frantic 911 callers that we'll get to it when we find time, thanks for calling. Its about that time, or when waiting for food to be served, that visitors remember they are in the US dammit, and service is #1. 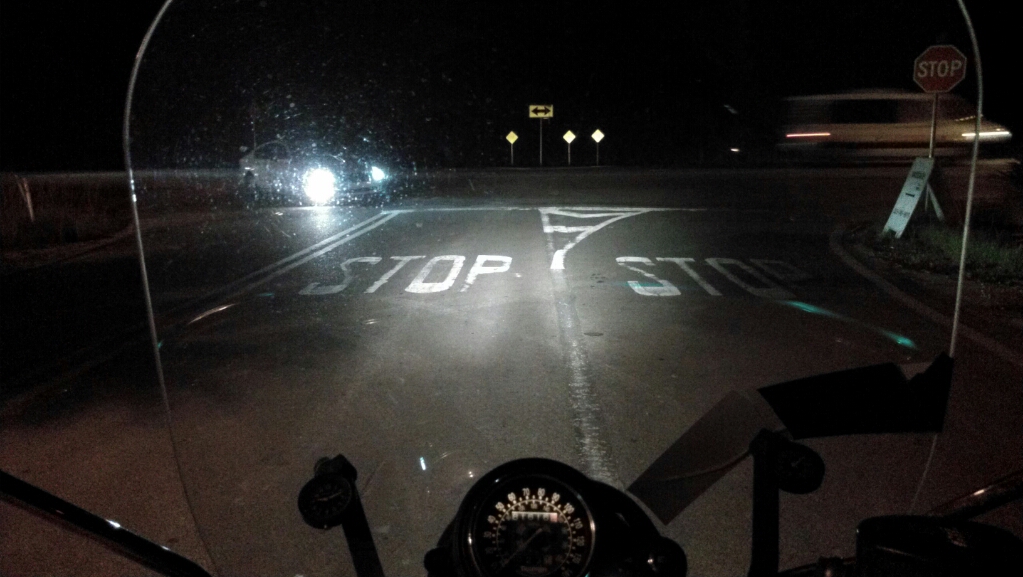 The Overseas Highway is the least demanding road to drive anywhere, frankly. It's mostly straight with easy curves, long sight lines, clearly marked road stripes and reflectors (mostly), not many cross streets, not many animals outside of Big Pine and the deer, few pedestrians and  though there are cyclists the smart ones that deserve to live use the bike lanes. The spandex covered ones that compete with internal combustion in the travel lanes are simply God's way of culling the herd and increasing the average human intelligence quotient.
Merge lanes are an intelligence test and a source of constant vexation. The idea of using them to slow down out of the travel lane, to pause in them prior to turning, or using them to achieve parity with the speed of the traffic flow as you come out of a side street are apparently not concepts taught in driving schools. Or if they are they are ignored or forgotten. I love merge lanes but dawdling drivers who observe my intent of speeding up and inserting myself into the gap they have created get vexed sometimes and tail gate. My advice is simply to pay attention and keep up with the car in front. Or get a motorcycle and enjoy the ride. 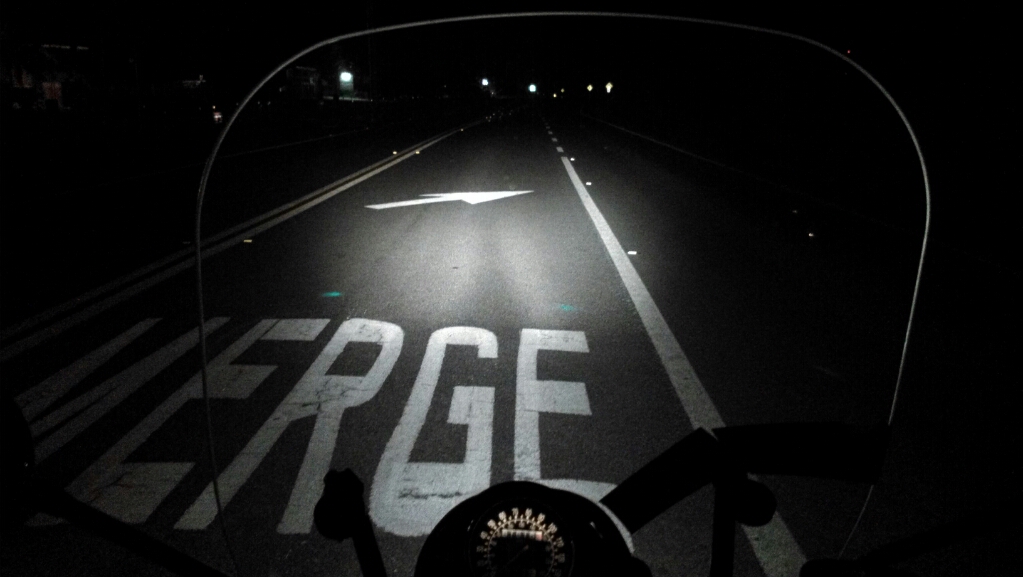 The only good part about getting out of bed in the middle of the night is the ride to work, alone, in the dark on an empty highway. Of course its never actually completely empty but bowling along in one direction passing cars going the other way does not interfere with my pleasure.  Mangrove Mama's restaurant on Sugarloaf Key is three miles from my home. 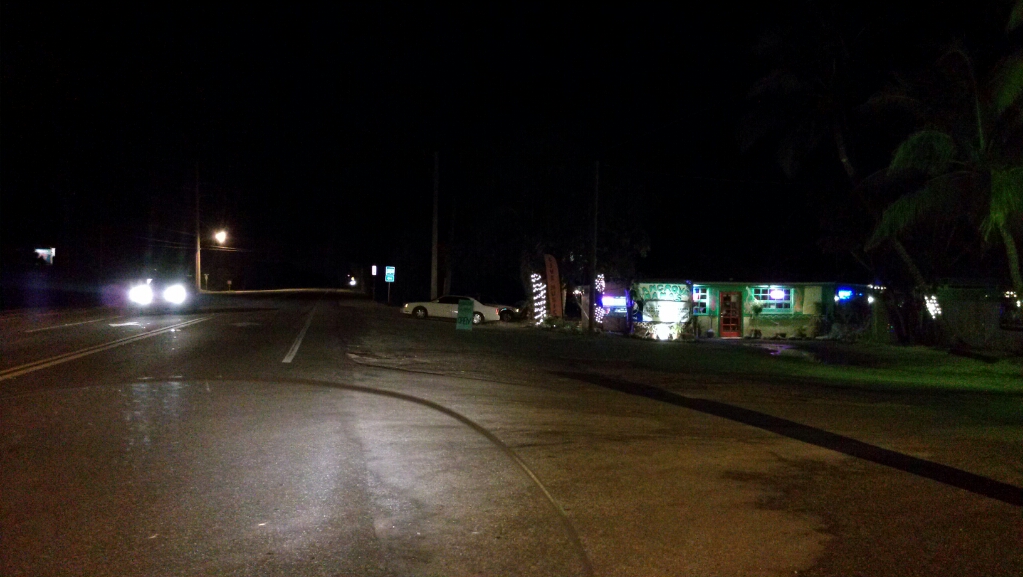 A mile further at Mile Marker 19 (descending numbers toward Key West, Mile Marker Zero) the flashing yellow light denotes Sugarloaf School at Crane Boulevard. During rush hour the light works as a traffic light to let anxious parents and commuters get into the flow of traffic on the highway. The rest of the time it flashes yellow on the highway and red on Crane Boulevard. 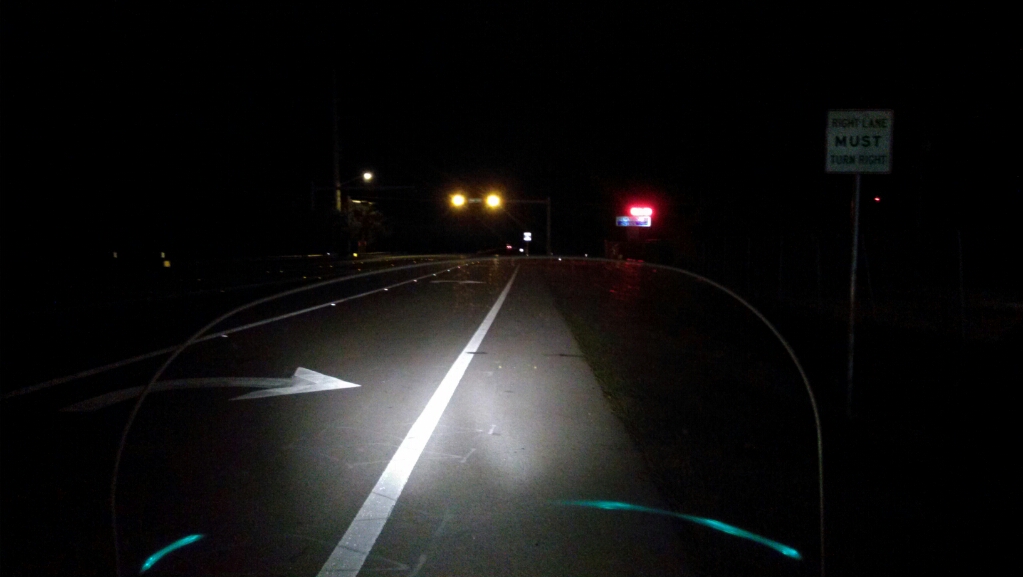 The Saddlebunch Keys between Sugarloaf and Big Coppitt are a relatively long stretch of complete darkness, a 55 mile per hour limit with passing places, their frequency reduced in the most recent re-paving as is the way with the irritating Department of Transportation in the Sunshine State. A lovely place nonetheless to bowl along and enjoy the warm night air, the moon or the stars and the big gray night time clouds. 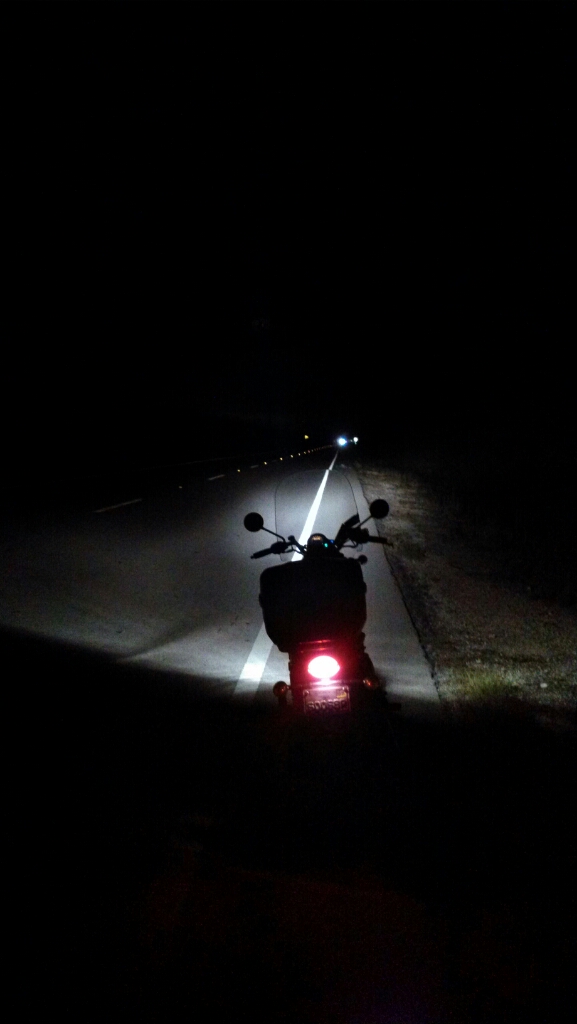 Some travelers fret about finding gasoline in the Keys as though these peninsula islands are a desert outpost far from re-supply. Unless the highway closes thanks to an incident gasoline is readily available and every  thirty odd miles at least you'll find a twenty four hour station. This one in Big Coppitt is the last one for ten miles until you find the 24 hour Chevron on Stock Island  and at five that I can think of in Key West itself. That the gas here is  thirty cents a gallon more than further up the islands doesn't alter the fact that it is  at least available. Just like at home. 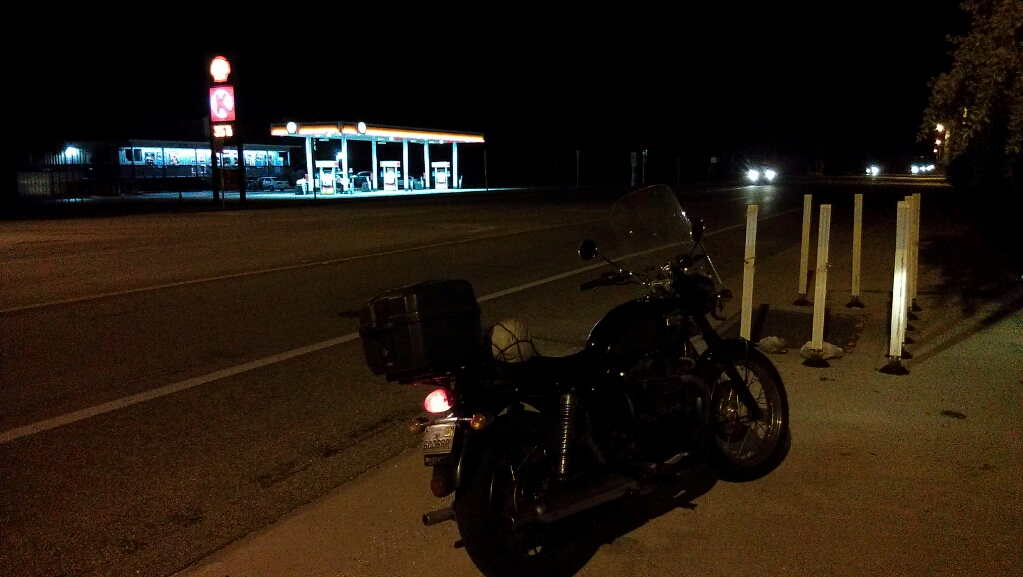 By the time the four lane section of Highway One pops up, just five miles from the outer fringes of Key West I'm ten minutes from my desk, at this hour of the night. The four lane highway that runs past the Boca Chica Naval Air Station is a small chunk of mainland driving, with bill boards, exit lanes and one overpass with on ramps just like a real freeway. 50cc scooters ride the shoulders here, an act of derring do that is not allowed by rental companies. Bicycles have a separate lane and you'd be surprised home many fit people commute from Big Coppitt to Key West. 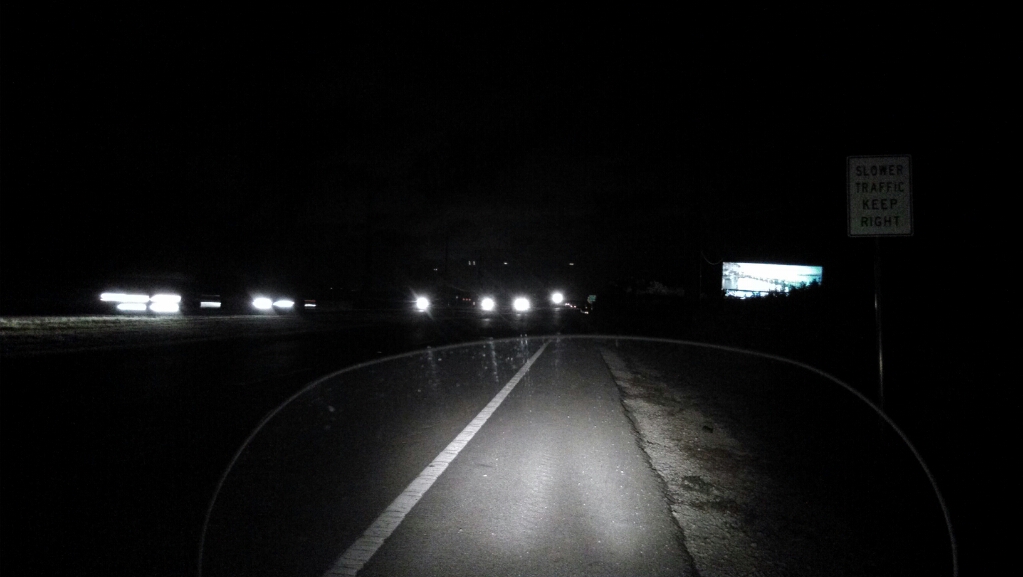 Boca Chica Bridge is illuminated by orange streetlights, open bodies of water on either side. In the afternoon ride to town I'll often see jet ski tours carving curly wakes here, and fighters practicing aircraft carrier landings come in low over the roadway. At night it's me and the Bonneville's headlight. 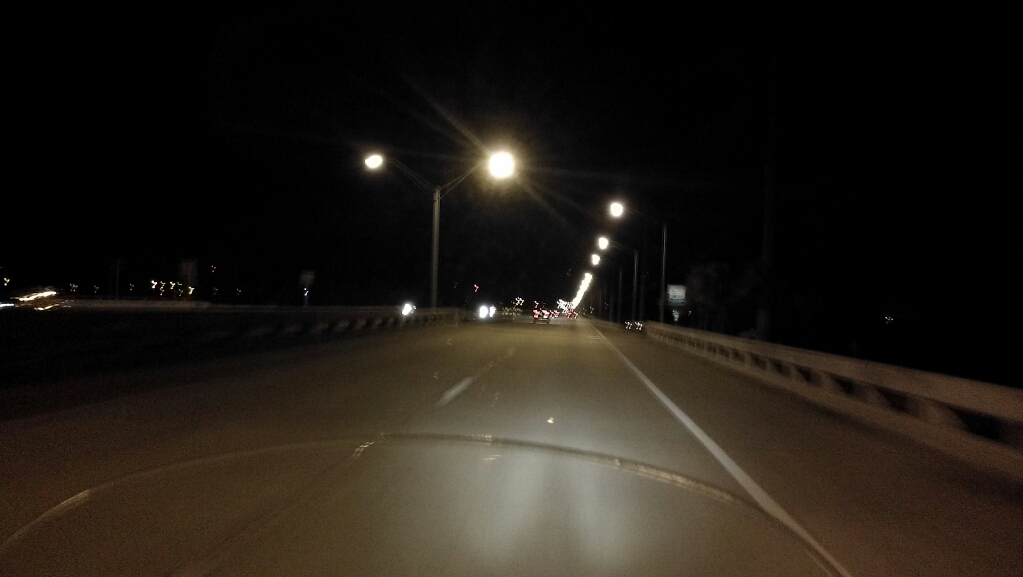 By now the impetus to arrive gets softened by the encroaching civilization, speed limits drop with every traffic light until by the time Stock Island is left behind the limit into the city is 30 miles per hour, only picking up speed to 35 on North Roosevelt Boulevard, now a delight with properly timed traffic lights which so far have kept traffic flowing nicely. 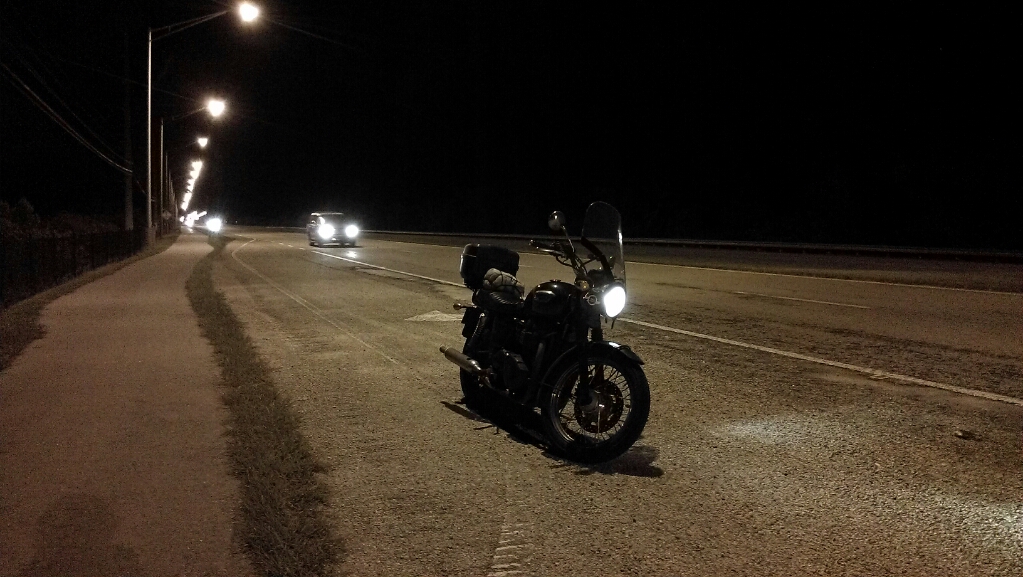 Then I'm at work with only the prospect of riding home in reverse, a 35 minute flight through darkness to look forward to. At the beginning of November when the time falls back an hour I will start to see the sunrise once again as I leave town on my home. Photographs to follow no doubt.
Posted by Conchscooter at 12:00 AM 2 comments: