Friday night after work I took Rusty for a walk around the apartment complex and it was hot and sweaty. Saturday morning the cold front arrived and our walk in the park was interrupted twice by sprinkles from the gray clouds overhead. After the second time I called it a day and we drove home. Rusty is nobody's fool and while I shuffled around organizing my walker and dumping his eggs in the trash he loped off and took a seat undercover in the entrance to our complex. He really is a remarkable dog. 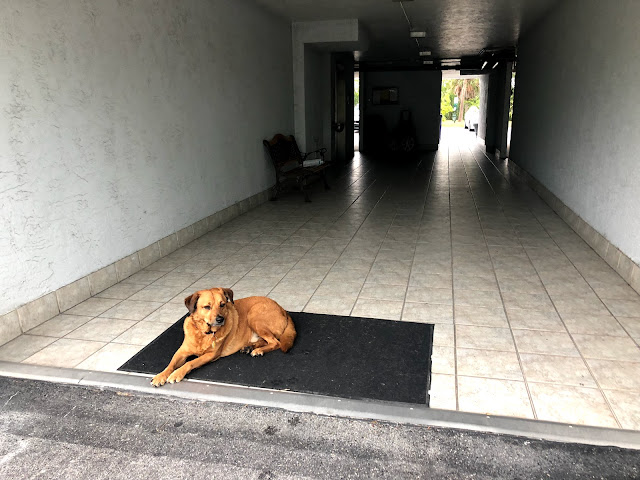 Robert came by just before noon to whisk me off for lunch. It was very decent of him to drive in to Key West from his home on Cudjoe and it made a long drive all round for him as his plan was to get pizza in Marathon of all places. Why Marathon? Because he had stumbled upon a pizza joint not well known to outsiders he said. Like I said it was a gray wet day with temperatures around 70 degrees: 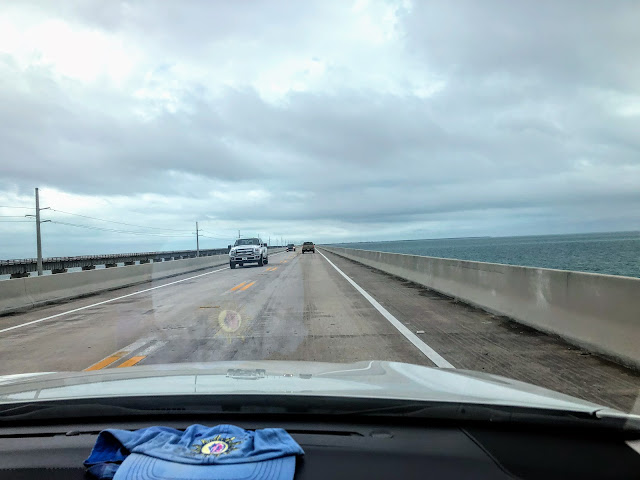 The restaurant called Hurricane was invisible in the strip mall opposite Home Depot. The section on the left is the bar and the place on the right was the eatery. We were looking for food, not adventure so we took the right. 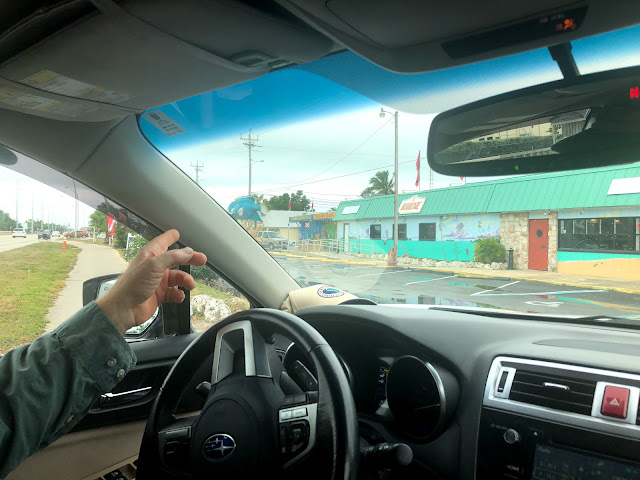 You can see at a glance why it's unknown and we were the first customers of the morning. Lots of attention from the smiling waitress and instant beer. 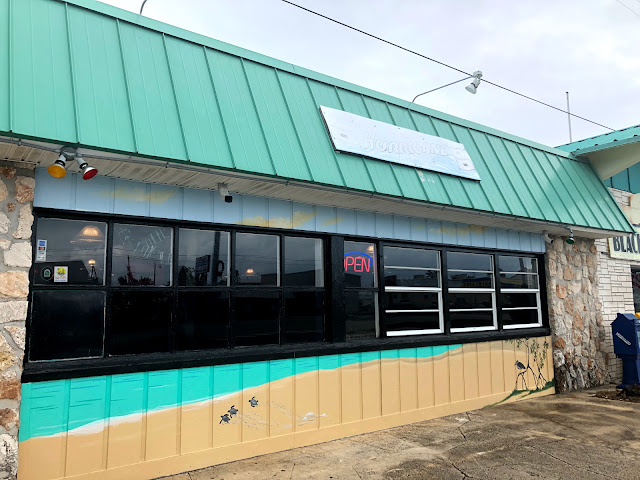 I made an early pit stop, always a source of anxiety in my handicapped state, but I was using the walker not the chair so I was more mobile that way and the toilet was a delight. I'm sure you need to know this but look at those substantial rails for me to lean on! High excitement! A coat of paint and the walls would have been perfect. As it was I positively glowed to be accommodated so comfortably  No falls here! 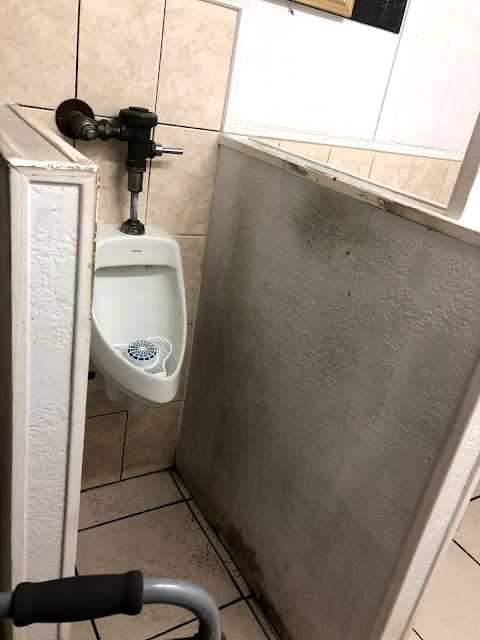 I had a weakling beer at 4.8% while Robert drank battery acid porter at 6.5% after tasting my selection and declaring it to be disgusting and soapy.  The pizza was sausage and spinach, Robert's favorite at the moment, and we did it justice of course. 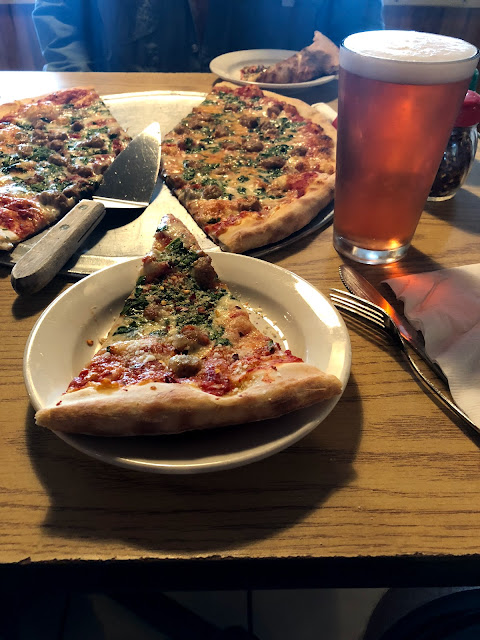 We talked of broken joints and climate change and attempts at my work (Robert is retired)  to suck me into the pointless melodrama of the workplace which I firmly rejected this past week. 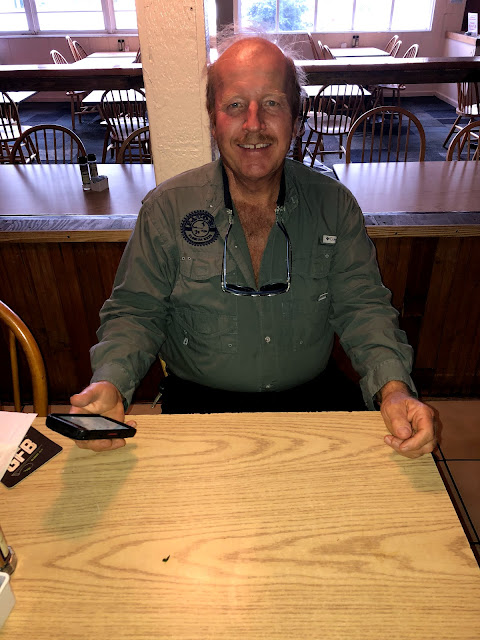 My wife has been poorly the past few days and in an effort to reduce her workload I said I'd order dinner at work last night. She suggested we go by Kentucky Fried Chicken so I could try their chicken pot pie and thereby hangs a tale. In our temporary apartment we have weak internet and strong cable service and we have watched a few TV shows. Layne likes the Food Channel and I like reruns of MASH and so from time to time we spot bizarre KFC commercials and they have some doozies, check them out if you have cable. 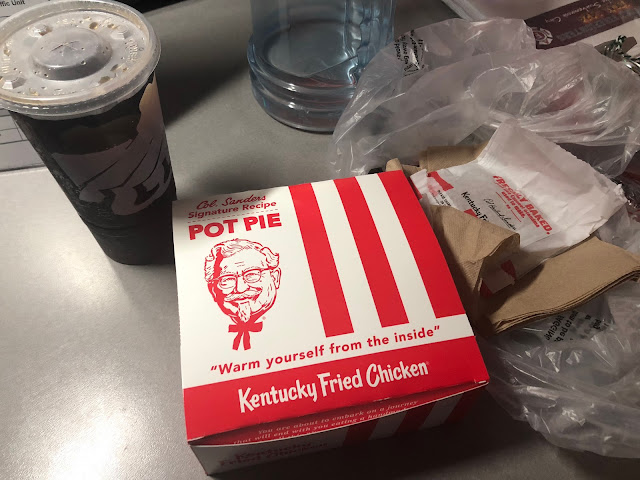 In between the Colonel dancing with statues and attending barbecues while dismembered (I think) I got to see a pot pie dinner on offer and I grumbled to my wife that she never makes pastry ("Make your own!" I hear the peanut gallery rumble) and I like pot pies. So, being the brilliant person she is, she suggested I get a pot pie for my dinner. Why Marathon? That question again and the answer is that there is no KFC in Key West! Let me say it was actually very good and hit the spot. 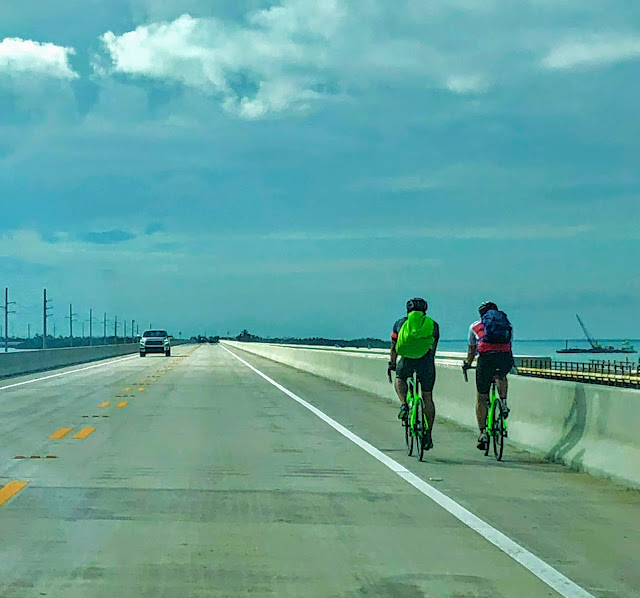 Robert is a bloody nice guy. He stopped by our house and even picked up the mail for the immobile tired man in the passenger seat. I am trying to be easy going about my inability to walk easily, and it is getting better, but I am frustrated. Robert is very good natured.  We listened to some strange stories on NPR as we did our marathon drive, about some dude in jail falling in love with a  community volunteer and marrying her. His original crime? Murdering his ex girlfriend and his baby momma and hearing that left you a bit breathless. A story that gave me pause, measuring the life effect of a major screw up in decision making which he sounded sincere in regretting, but still....  Life in jail versus a few months handicapped. I'm okay. 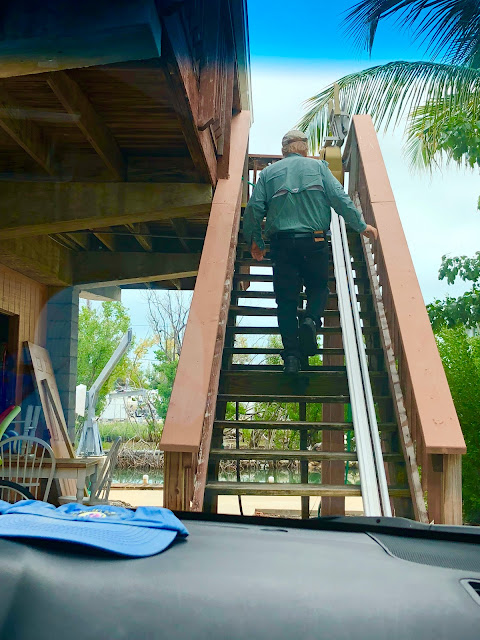 Besides I am getting to recover in the Florida Keys which even under a cold front are not covered in snow and ice and other nastiness and my friends are always there for me ready to listen and cheer me up. 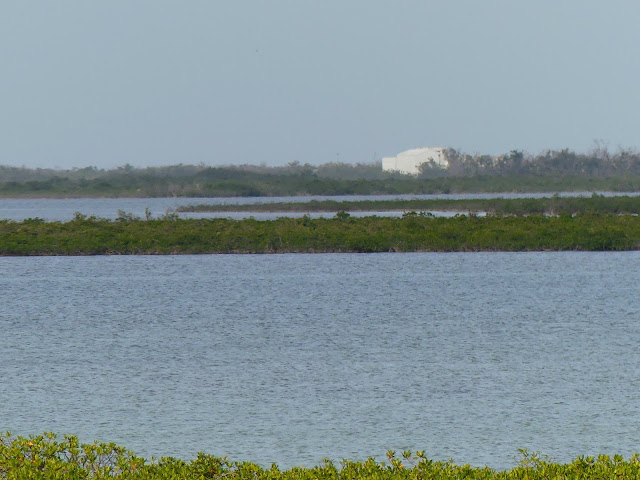