The English call these nasty brutish and powerful motorcycles "Lead Wellies" because in England the boot named for the late great Duke of Wellington has become a type of rubber waterproof boot. Thus it is the Honda Goldwing, dangerously overweight and unwieldy in my opinion deserves the English sobriquet of heavy unwieldy footwear. This turquoise colored object, a 1970s vintage original Goldwing came to me in a dream once in the mid 1990s when I was a happily married man, and I interpereted the dream to mean I should buy and ride a Goldwing at least once in my life before it was too late. So I went out and bought a standard GL1100 lightly used, well equipped and ready to ride for miles and miles and miles. As long as you stayed upright and took no risky action like trying to actually steer the brute round a corner. 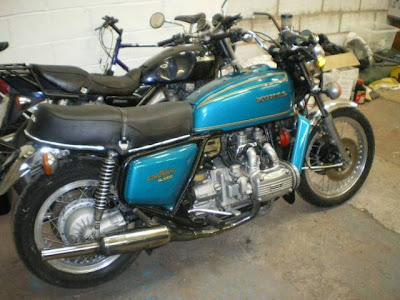 Beware of people who interpret dreams because I'm not sure dreams are always meant to be interpreted. I'd have done better had I assumed that the dream ride was all the Goldwing I needed in my life. If only I had followed that path. Nevertheless I went forth and bought the shaft drive machine similar in some respects to this one pictured below. My Lead Welly came in a pale shade of silver and it was going to be my ideal commuting machine. That was until I got on the thing and tried to ride it. It was terrifying. The power from the four watercooled cylinders seemed phenomenal, especially in light of the fact that the motorcycle was huge heavy and supremely comfortable. Winding open the throttle on the beast was enough to pin my eyeballs to the back of my skull, but you wouldn't have known it from listening to the unhurried purr of the almost silent engine from the comfort of the plush seat. Leaning into a corner felt like leaning on an unsupported brick wall. I felt as though the Goldwing was about to create a tsunami on the roadway, a ripple of torn and shredded asphalt as I tried to force the 700 pound monstrosity to bend to my will. I lost all the time and found myself tottering around the many corners in the Santa Cruz mountains like a geriatric pushing a walker with a broken wheel. It was a total pain in the ass, living in some of the best motorcycle country anywhere and being unable to enjoy my new ride. 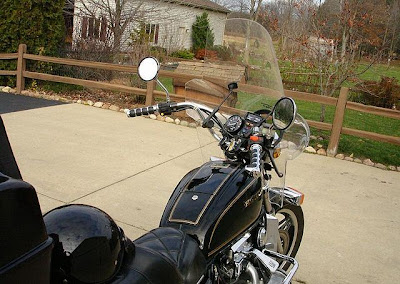 Goldwings were revolutionary bikes when they first appeared in the mid seventies. Honda planned to sell them as high performance bikes but with water cooling, shaft drive and extreme comfort they ended up being the preferred rides of long distance tourers. People added their own bags and Vetter built a wind shield and eventually Honda stopped building the standard bike and it evolved into the purely touring, fully faired, overly equipped monstrosity we see today with an 1800cc six cylinder engine. By today's standards the modern Goldwing is a marvel of technology with reverse gear and some 800 pounds of weight making it essentially a small car. In the 70's the much simpler 'Wing was still a marvel of technology for the time. My bike was a simpler ride but it did nothing much for me, I have to say, except to leave brown streaks of fear on my underwear anytime I strayed from a straight line trajectory. 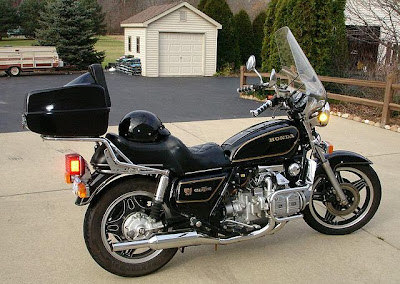 I was living in Santa Cruz at the time, married and commuting "over the hill" to the Big City of San Jose where I had a job as a truck driver, a childhood ambition fulfilled at last. I wasn't doing long haul but I was driving short haul around the San Francisco Bay Area going to work early in the morning and coming home late in the evening. I made good money and had superb Teamster benefits. Silicon Valley was booming and I delivered supplies to weird little start ups like a place called Google, a tiny little office tucked away on Pioneer Way in Mountain View, and then there was Sun Systems further up Highway 101, and Advanced Microchips and Xerox and the like. I figured the Goldwing would be a great way to ride Highway 17 over the Santa Cruz Mountains to Silicon Valley to pick up my truck at the start of the work day. This winding nightmare was my route and on the Lead Welly I shit bricks every time I rode Highway 17 with the rubber framed over weight monster. 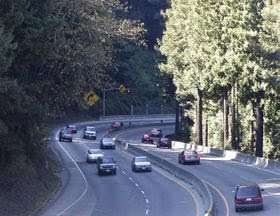 Highway 17 used to be known as the most dangerous road in California, because before the median cement barriers were installed this highway was one long series of head on collisions and with no shoulders, traffic back ups were frequently epic involving a cast of thousands as an accident would stop everyone in every direction and motorists would camp out, stuck in a morass of a giant freeway parking lot. I figured a motorcycle in a state that allows lane splitting would be great and the Goldwing known for it's comfort and low maintenance was just the job. I had recently sold my fully dressed Yamaha 650 Maxim, a shaft drive air cooled four cylinder that I had bought in Fort Myers and ridden across the country to return to my home base in California. It was getting old and I needed new wheels. What a mistake! What I actually found with the Lead Welly was that riding the beast after a long day's work was just awful. It was heavy and required immense amounts of concentration, that I didn't have after a long day of dealing with a tractor trailer. It's power was awesome for someone like me used to smaller bikes but the weight made me feel like I was always ready to lose control of the beast. I ended up hardly riding the thing at all. It sat in my garage. I must have owned it for more than a year and never recall changing the oil or replacing a tire, I rode it so little. Which is funny really when you consider how much I love jumping on and riding the Bonneville these days- any excuse for a ride!

The man who sold me the Goldwing, a superb motorcycle mechanic and small time trader, did his best for me, I wanted what I wanted but the shame of it was he had another bike for sale that I think would have suited me a whole lot better. This was the era of Turbo everything and Honda had a mid sized bike supposedly set to take on bigger cubic capacity machines with that little extra zing. This beauty, the CX 650 Turbo also had shaft drive and came with saddlebags and I should have snapped it up. 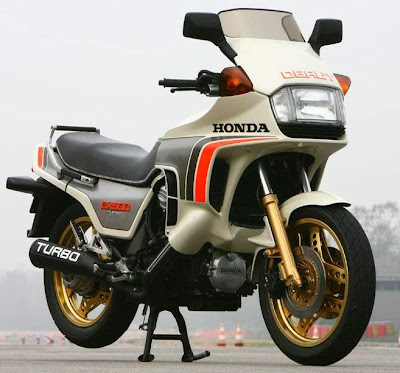 God knows why I felt the need to buy the hugely heavy Gold Wing, I blame that stupid dream. I know I was overwhelmed by my Lead Welly from the first and I kept hoping it would get better and more comfortable but it never did and I was never so glad as when I saw the last of it and sold it on, at a huge loss to some other sap. In reality it wasn't a bad bike and it was exactly what it was sold as, I just wasn't up to the challenge of controlling such a huge lump. I then bought a three cylinder Geo Metro hatchback and saved money and had a blast out-running much more expensive cars in my five speed bare bones little white car, back and forth "over the hill." 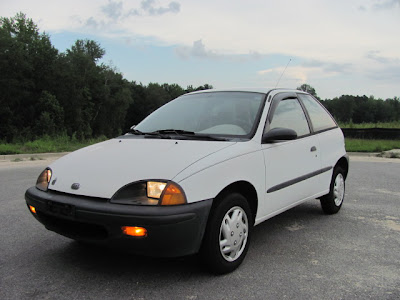 I got fifty miles to the gallon and excellent weather protection and it was fun in it's own way and about as easy to push across my gravel driveway as the gruesome Lead Welly. The best part of this fiasco was that I learned that overly large and overly complex motorcycles do not do it for me. I still regret not buying the CX650, which was God knows overly complex (!). Now that I enjoy riding the Bonneville so much I always know that bigger certainly isn't better for me and that's a useful lesson for me to have learned. I attribute my contentment riding the simple low powered modern Bonneville to memories of my struggles to enjoy riding the enormous Goldwing. I owe the heaving pig of the Lead Welly at least that much, the lesson it taught me, even though it frightened the shit out of me every time I tried to force it round a corner at anything faster than walking pace. Peace through struggle, I guess. What a gruesome interlude in 40 years of riding motorcycles. What a legacy- the absolutely worst motorcycle I ever owned.

Photos from the Internet.

Posted by Conchscooter at 12:01 AM 11 comments: Links to this post