The only law west of the Pecos is a catchphrase ever since Judge Roy Bean labeled himself thus. Today's installment stops by his home, courthouse, billiard room and the place where he died. 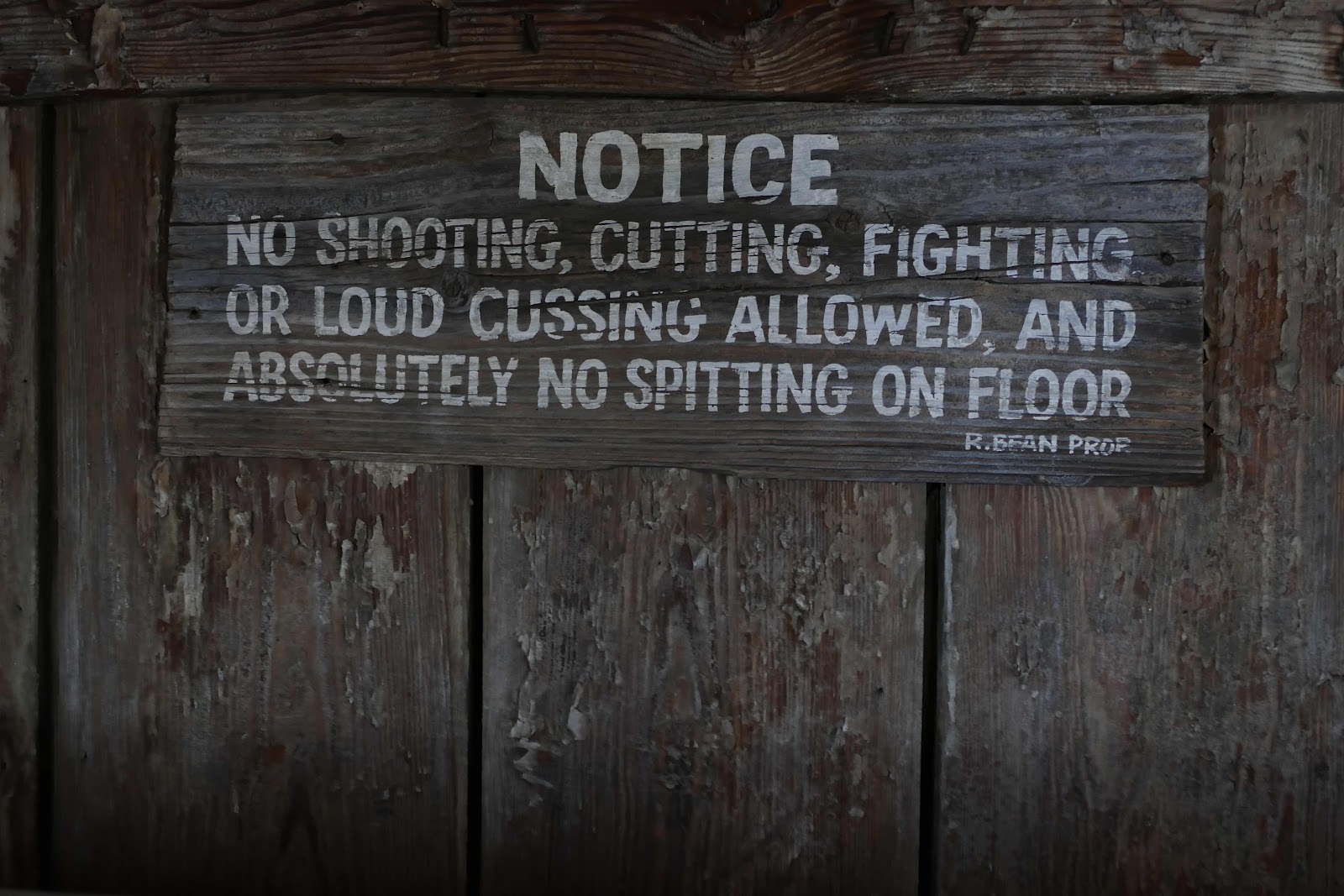 US Highway 90 runs along the southern edge of Texas and after a few miles from the Seminole Canyon State Park it crosses the Pecos River, which itself cuts an impressive swath through the desert. I read somewhere that some anonymous person has decreed that The West starts here. Fair enough then. There was little enough traffic on this major artery we managed to snag a decent picture from the bridge. 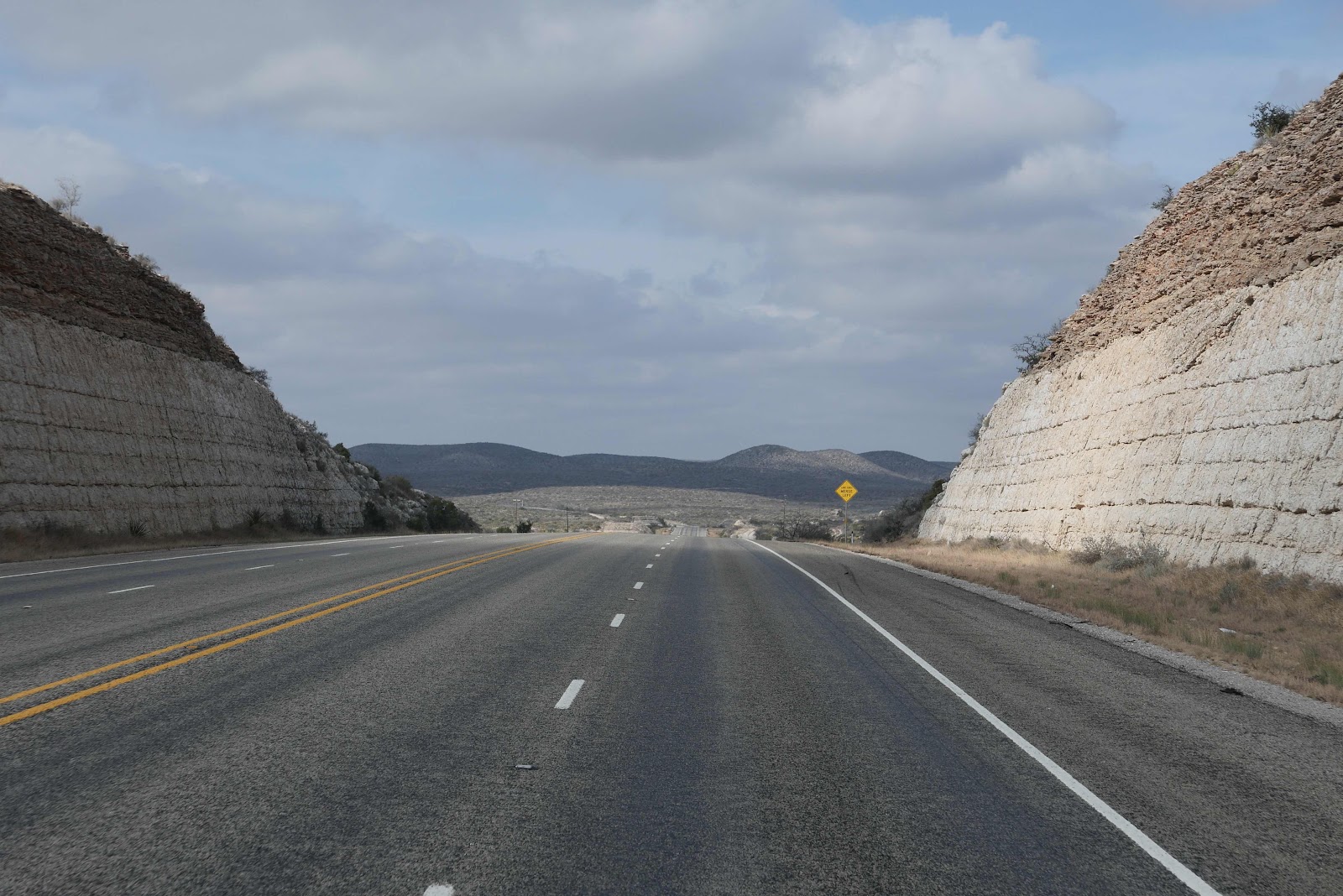 Langtry is a ghost town and I doubt anyone would notice it were it not for the colorful life of Judge Roy Bean. 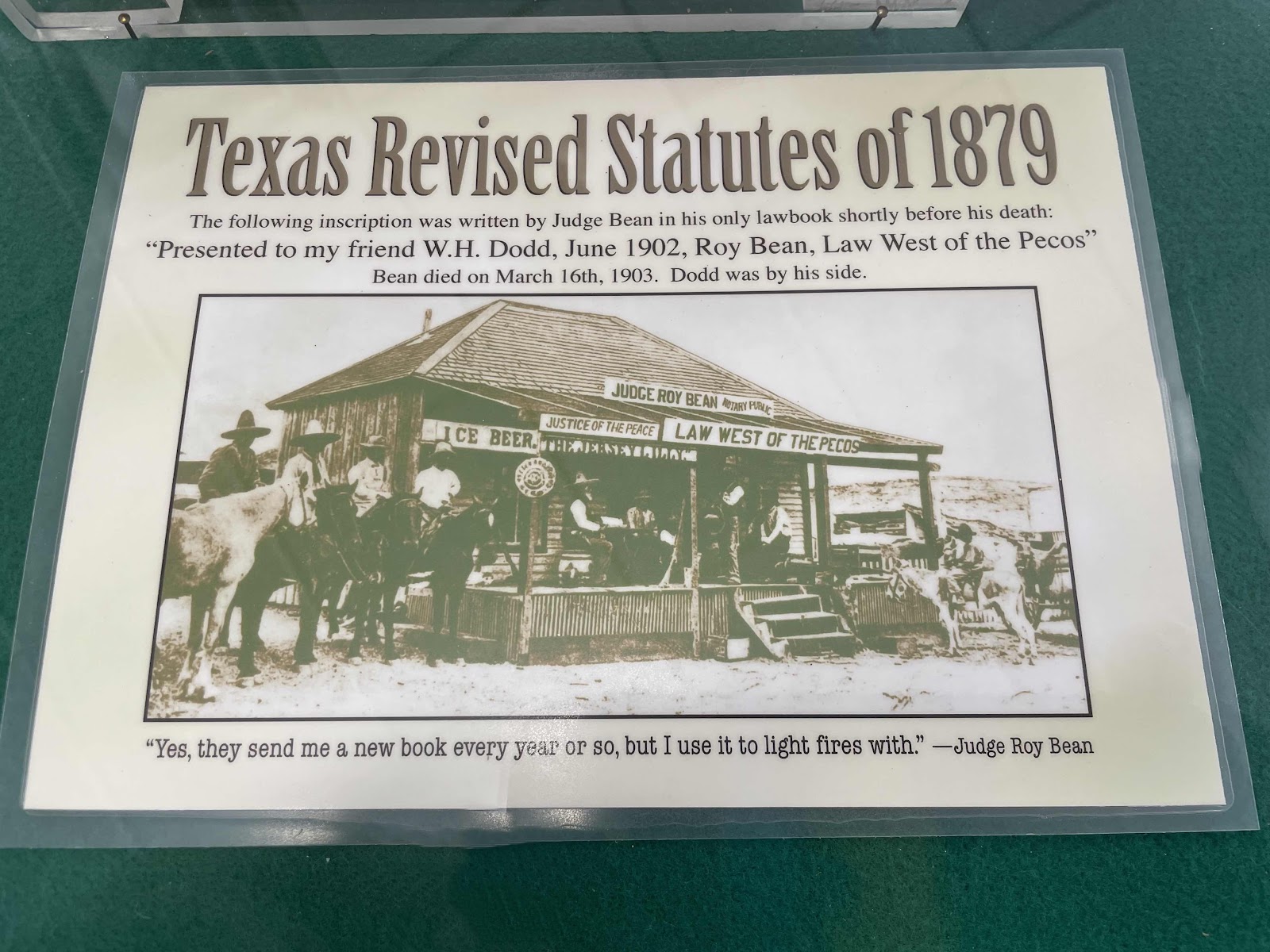 Roy Bean would be impeached in moments today but the place where he dispensed his form of justice was rather wild and wooly between say 1870 and 1910, broadly speaking, and he took full advantage. 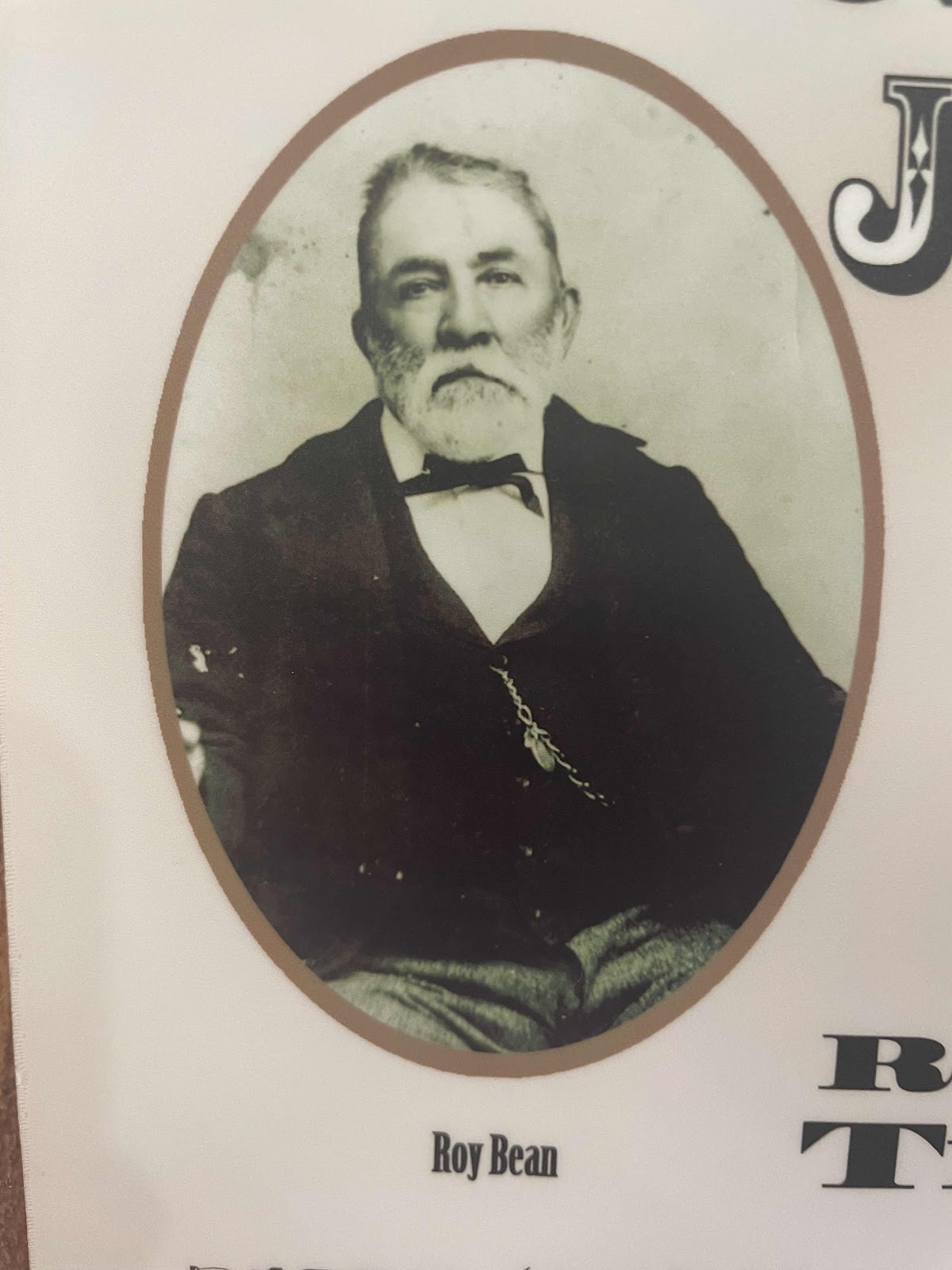 In the photograph below we see the bespectacled image of the man who put Langtry on the map, a British immigrant by the name of W H Dodd, another of those incomers to this country who make nomads like me look bad. He became a pillar of the community wherein worked Judge Bean. 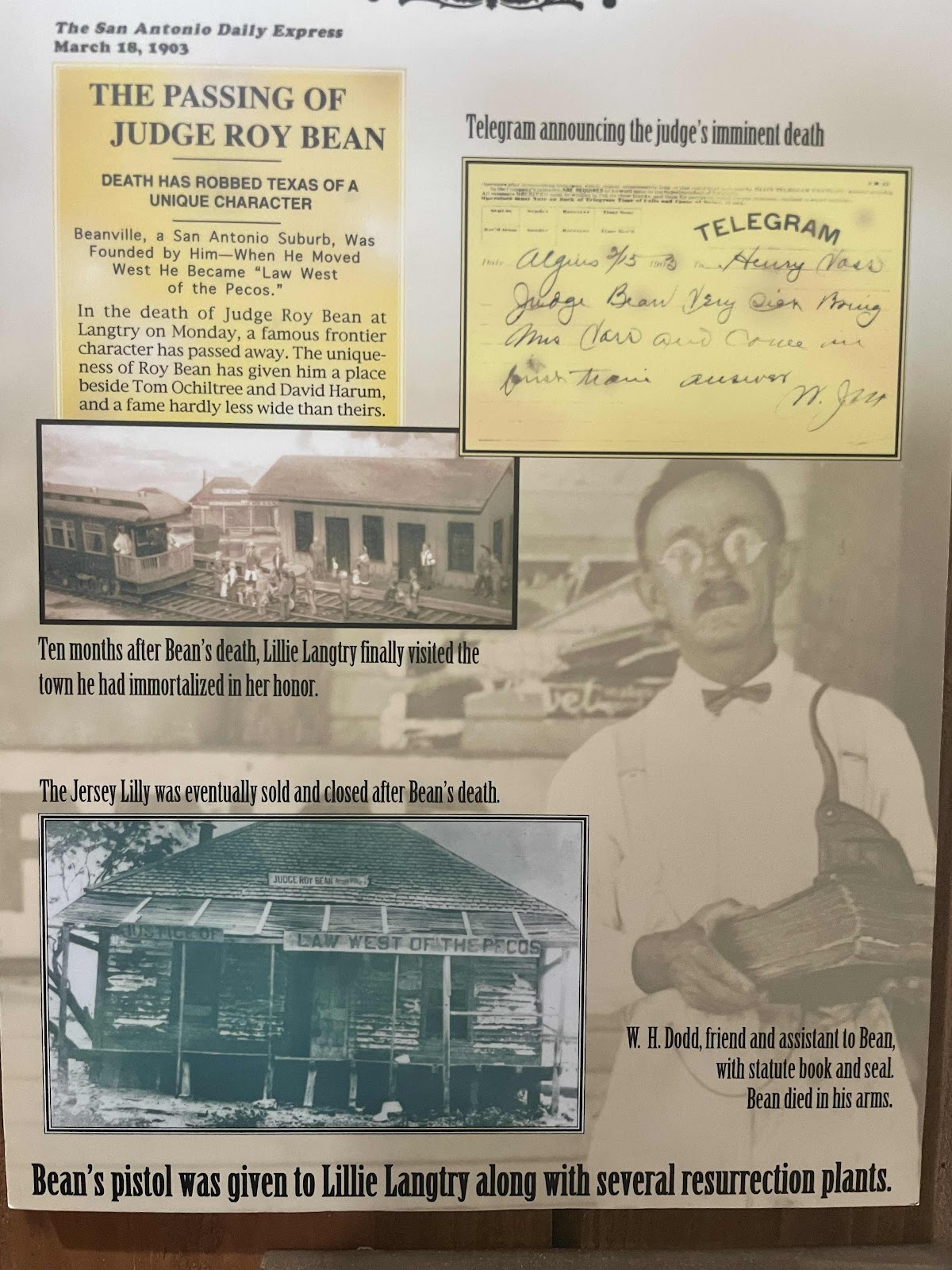 When I was in Langtry on my Vespa 200 in 1981 the story they told rather colorfully was that Judge Bean had a massive crush on a singer from the Channel Island of Jersey, essentially a British singer called Lillie Langtry, "The Jersey Rose." So they said he named the town for her, a tidbit I have remembered lo these 40 years.  He certainly did name his bar for her! 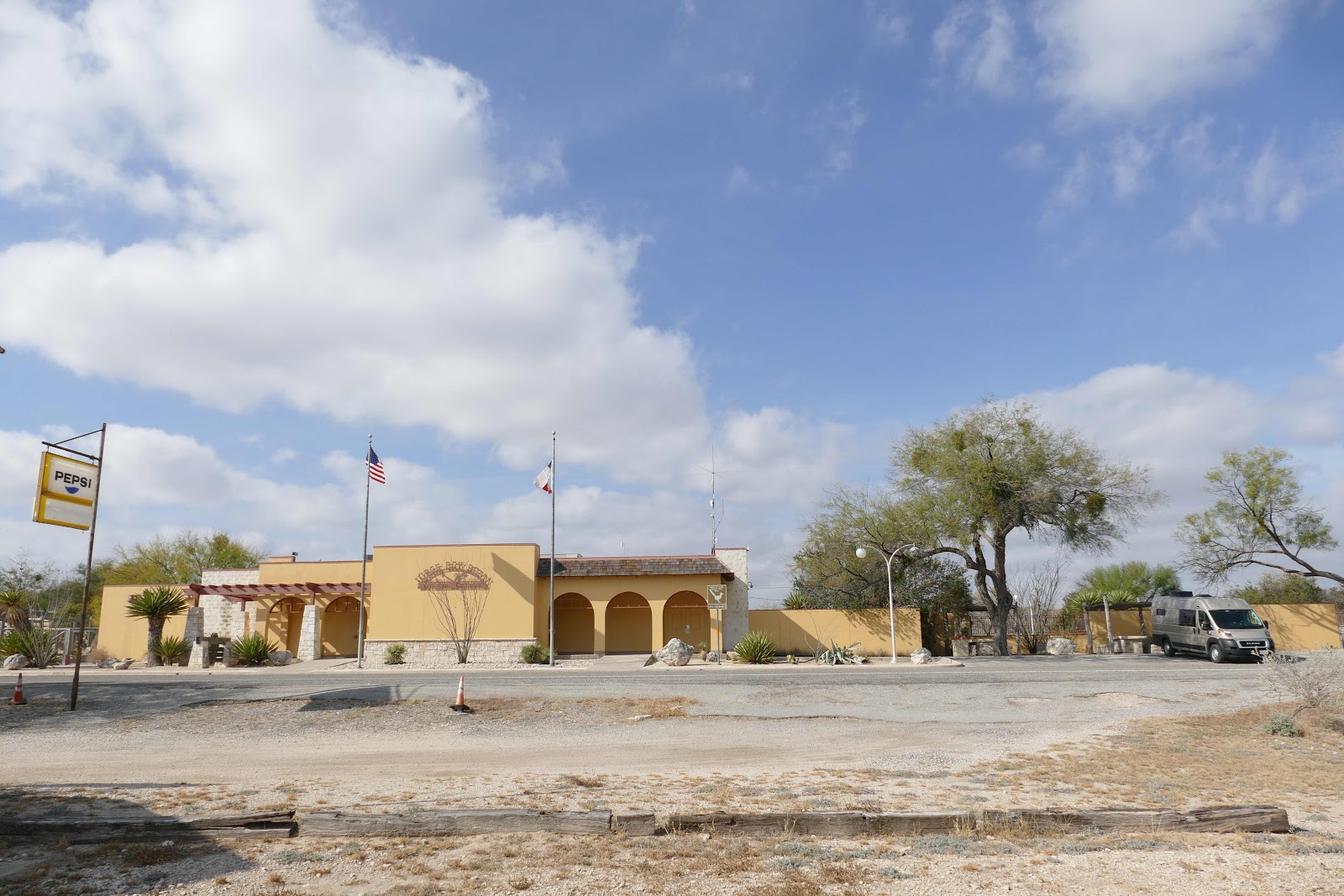 So much for that. The truth is the town was named for a surveyor called Langtry and the rest of the nonsense is all part of the allure of the infamous Justice of the Peace, a man who knew how to sell himself most outrageously and successfully. His bar/courthouse still stands, amazingly enough. Note the mention of the Jersey Lily (misspelled) on the front of the bar/courtroom. 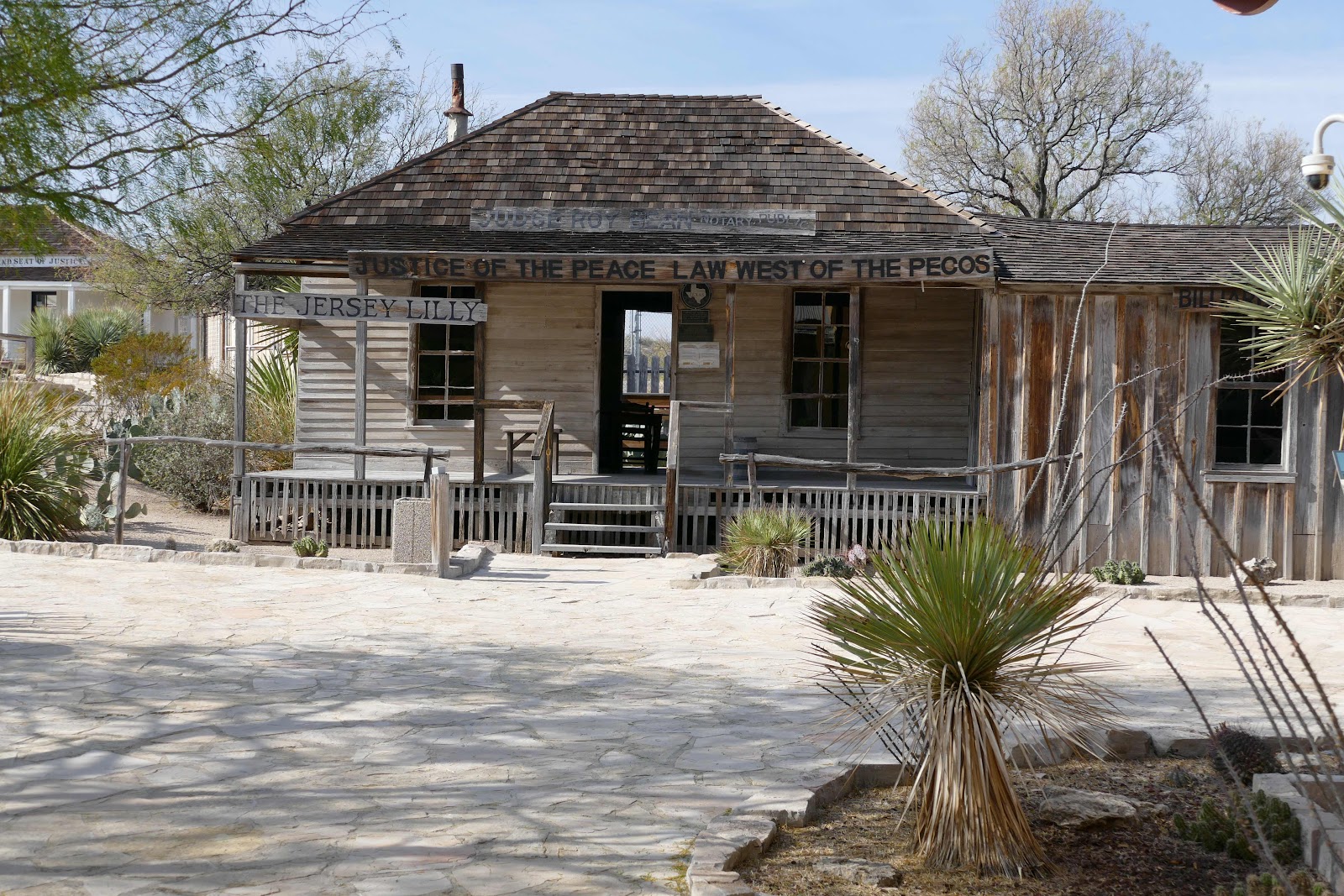 Layne wanted to pose behind the bar but the state park rule forbad such licentiousness, so as you can see times have changed West of the Pecos. 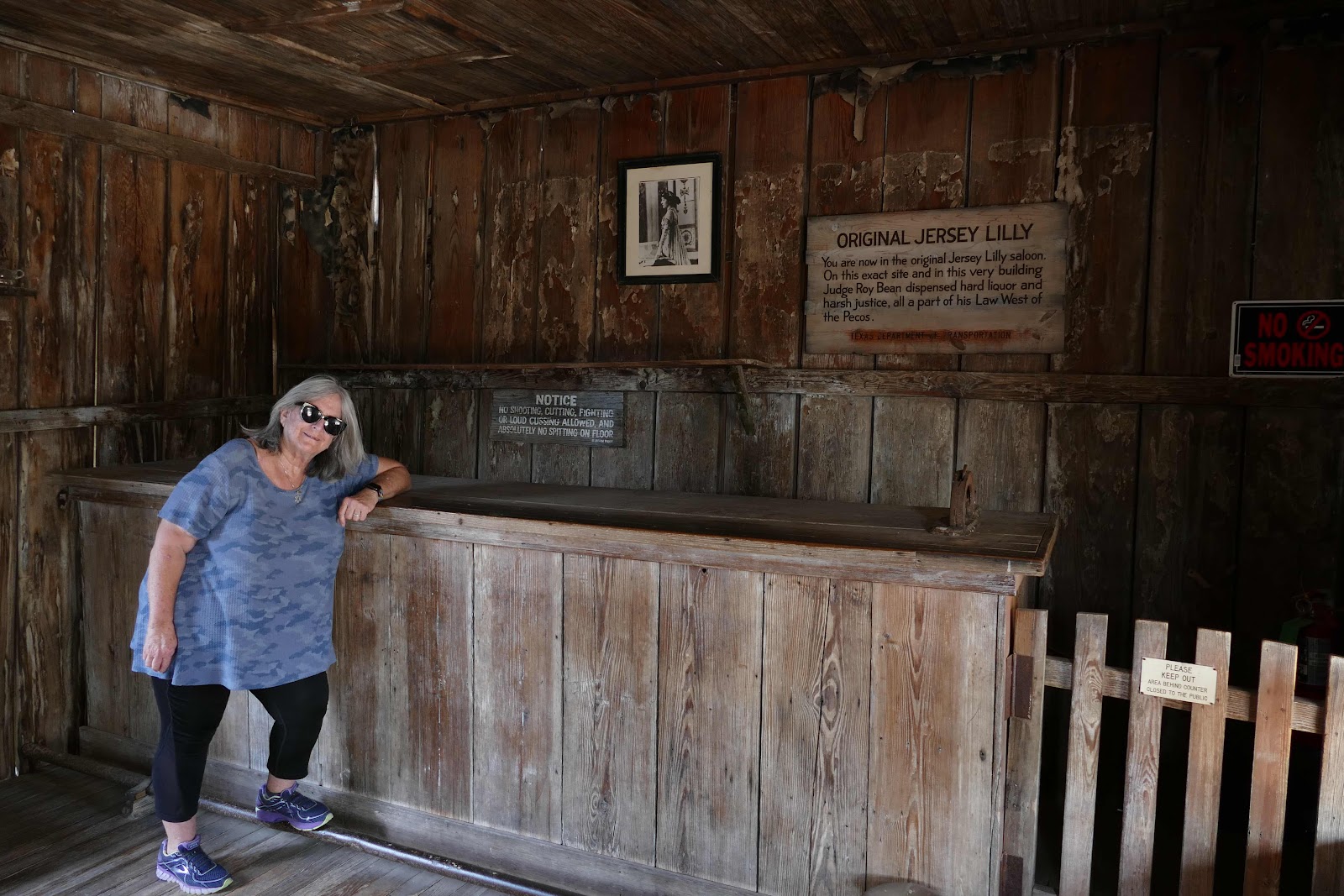 As bare of furnishings as the place is you can still evoke the atmosphere of that time. When I am tempted to think the stories about Judge Bean are over the top I am forced to recollect Key West's own Tony Tarracino who lived outrageously and sold himself very successfully...So before you write off Judge Bean it's worth remembering some people are gifted at selling themselves. 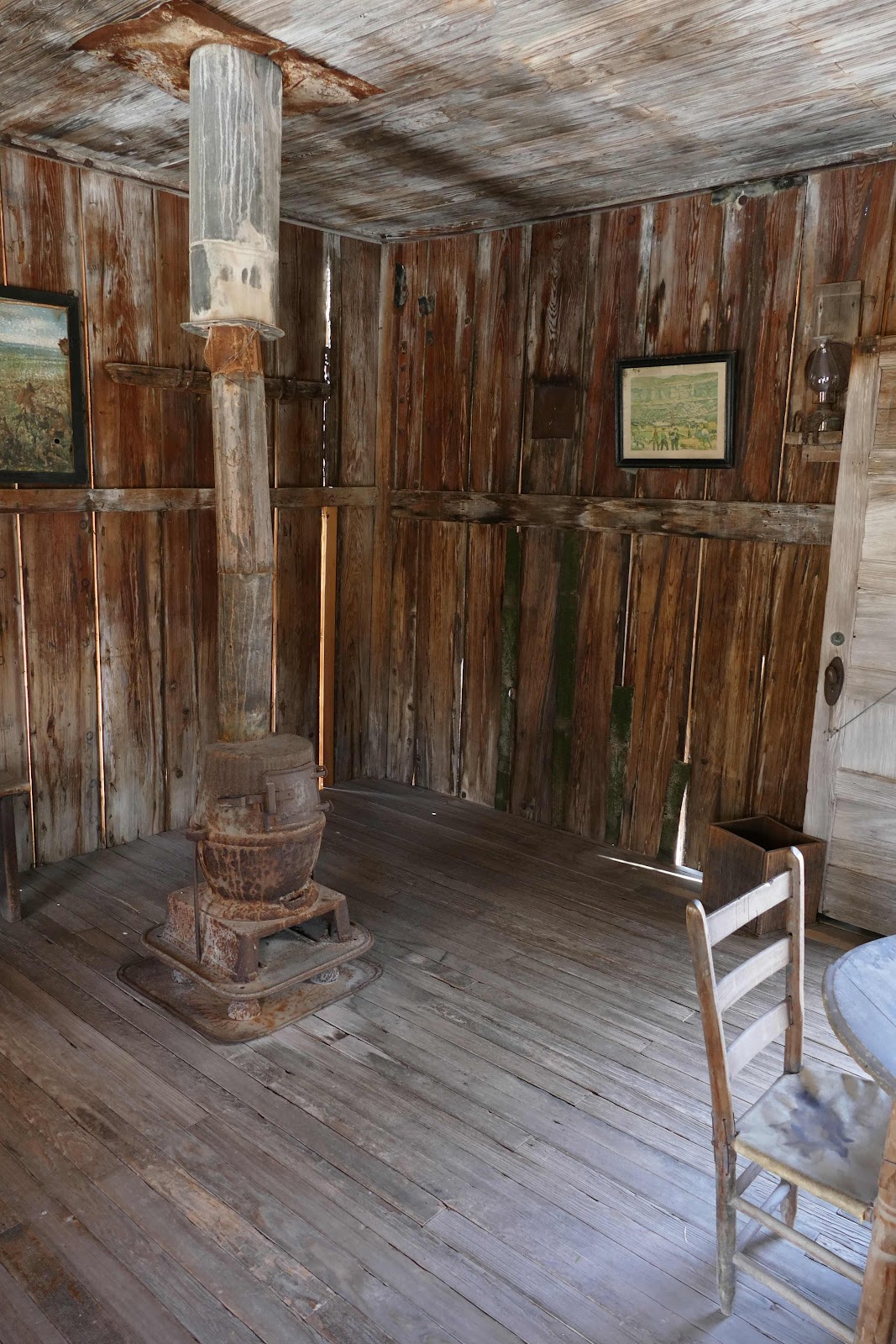 Here we have the adjoining billiard room where Bean died in 1903. 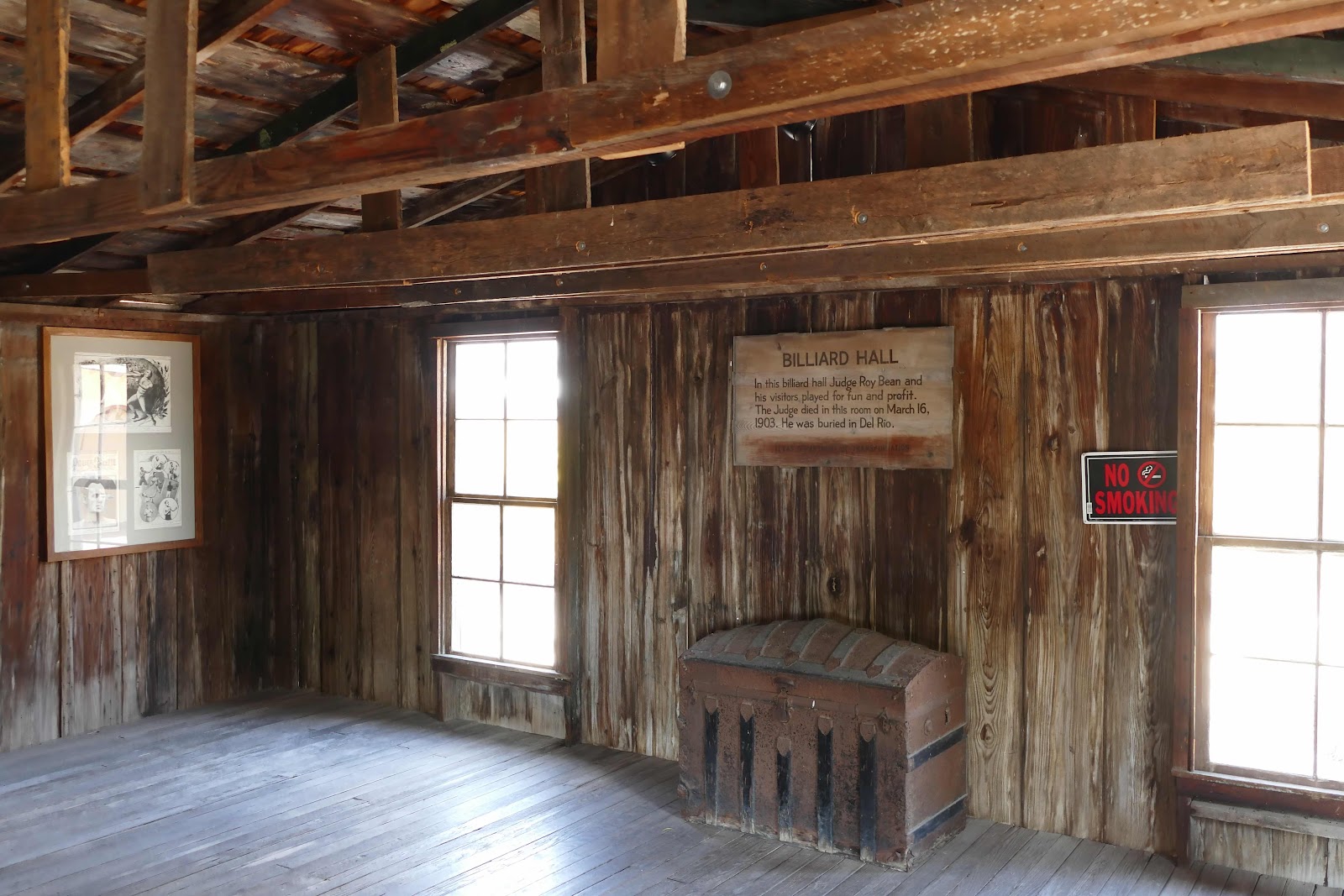 The view from behind exposes the very tiny courthouse complex that housed the oversized character. It is now protected by a very. modern air conditioned museum in front and access to all of it is totally free. 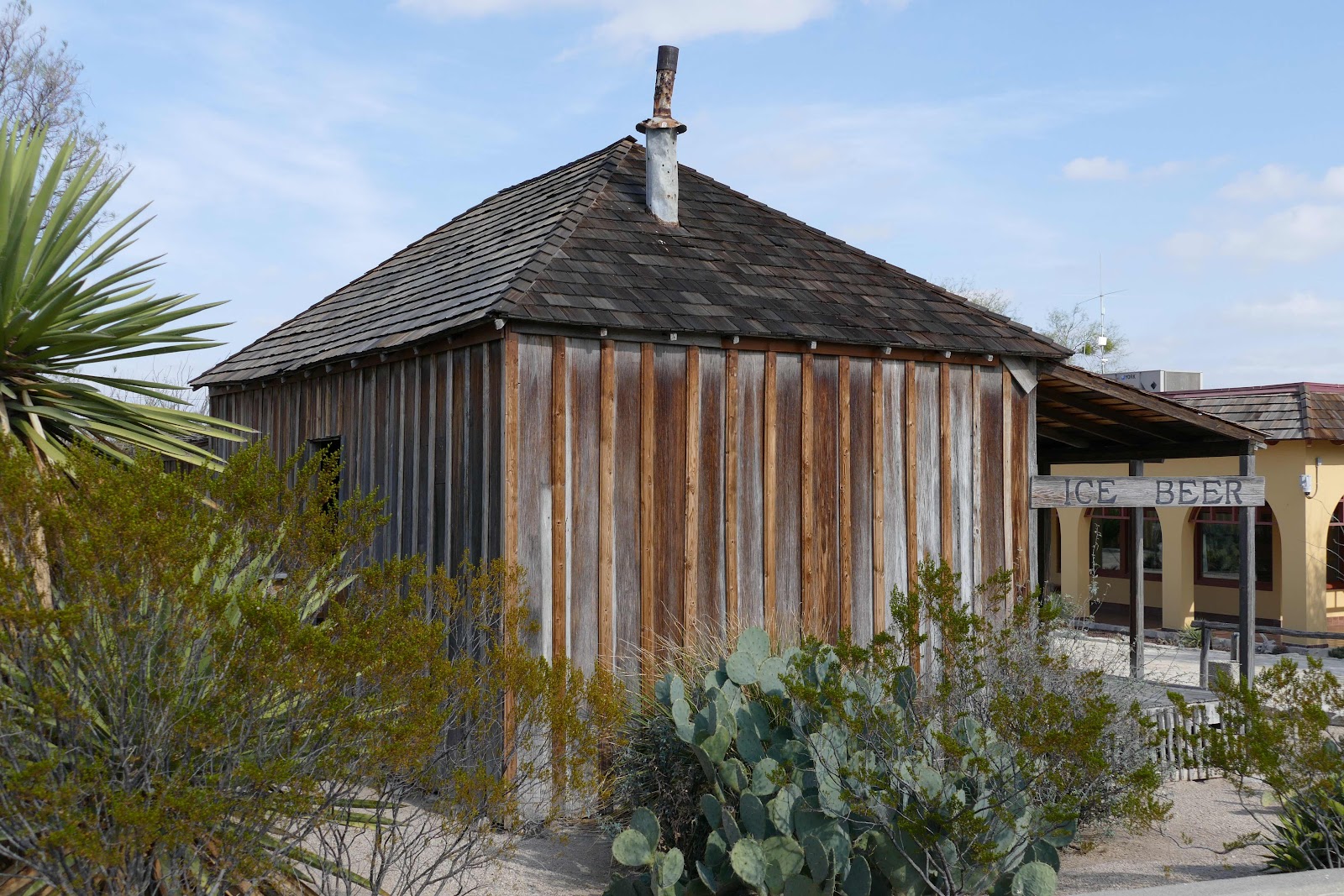 We took a walk through town after we inspected the grounds and paused in the shade of the museum building bathed in the glow of the free WiFi.  Verizon has overlooked coverage in this metropolis. 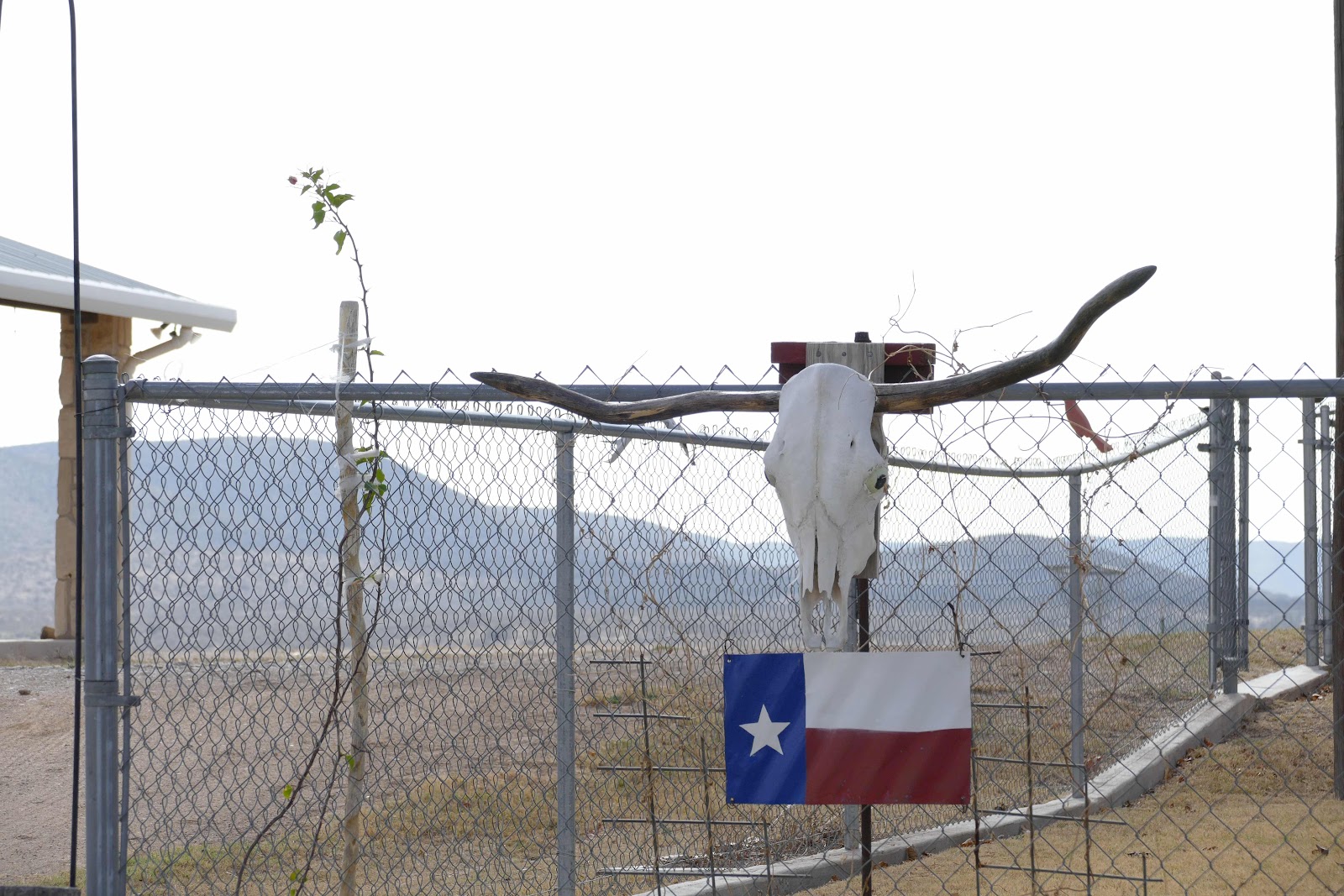 The Jersey Lily bar named no doubt in homage has closed and a hand painted sign directed us to its replacement a mile up the other entrance to town back on Highway 90. 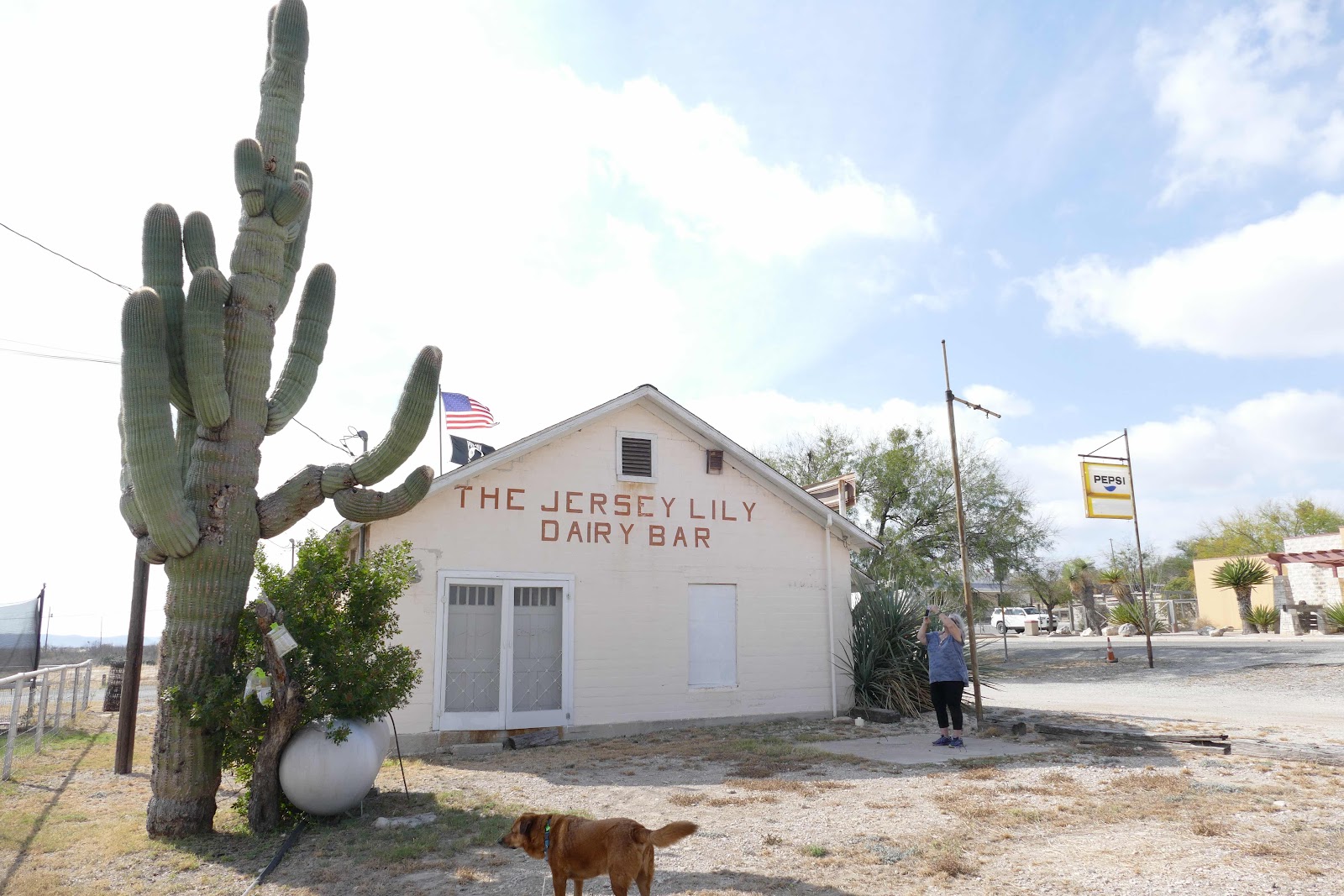 Langtry sits on a bluff overlooking the Rio Grande, the border river known to Mexicans as the Rio Bravo del Norte (the fierce river of the north). The Mexican side of this river is pretty empty all the way to Presidio, with a series of cliffs and canyons housing just two small villages. The American side isn't much more populated with a few small towns, the national and state parks and a road that parallels the river with, we found, hardly any traffic. Little wonder cell coverage is spotty. 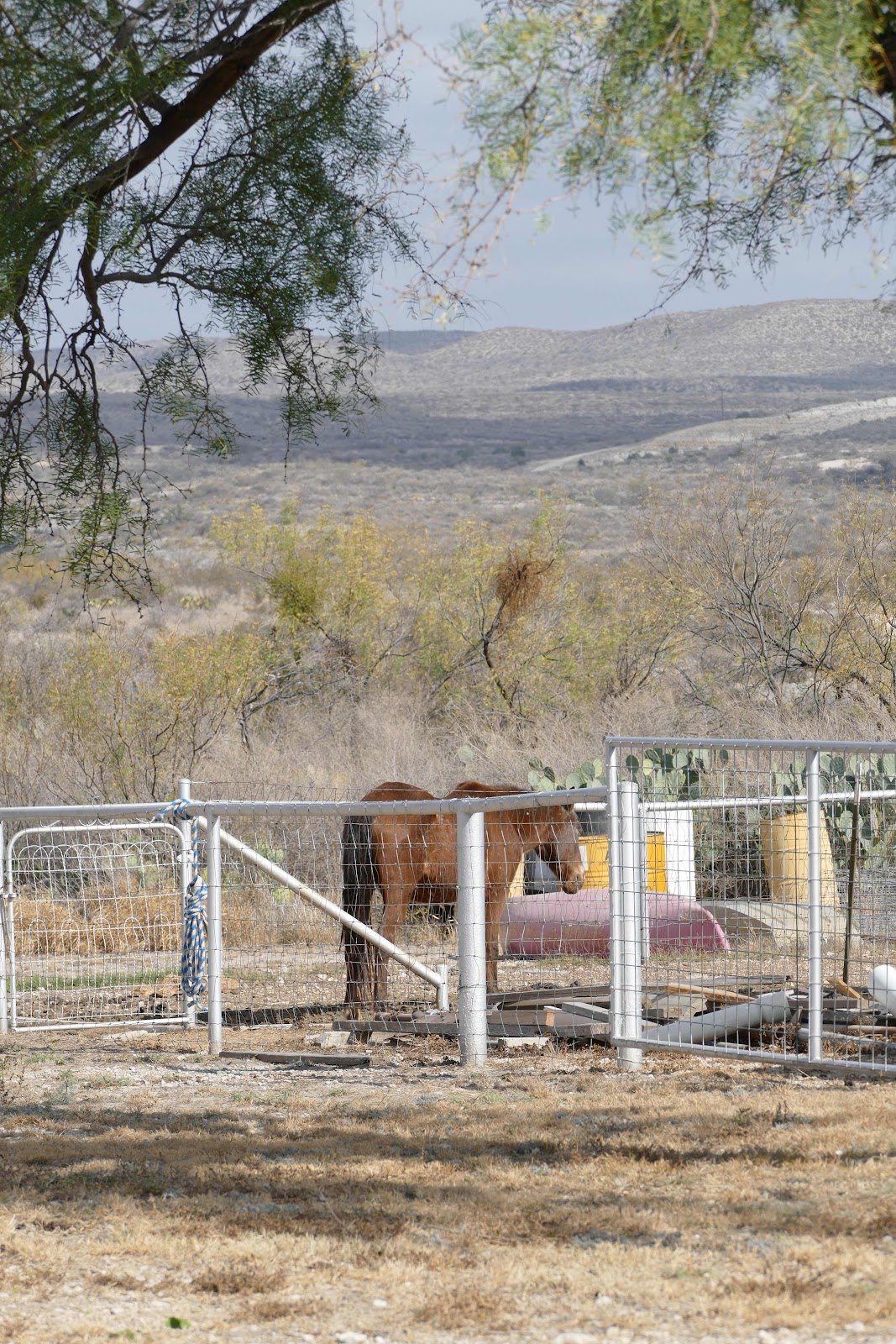 That mark of civilization, the postal service is alive and well in Langtry. 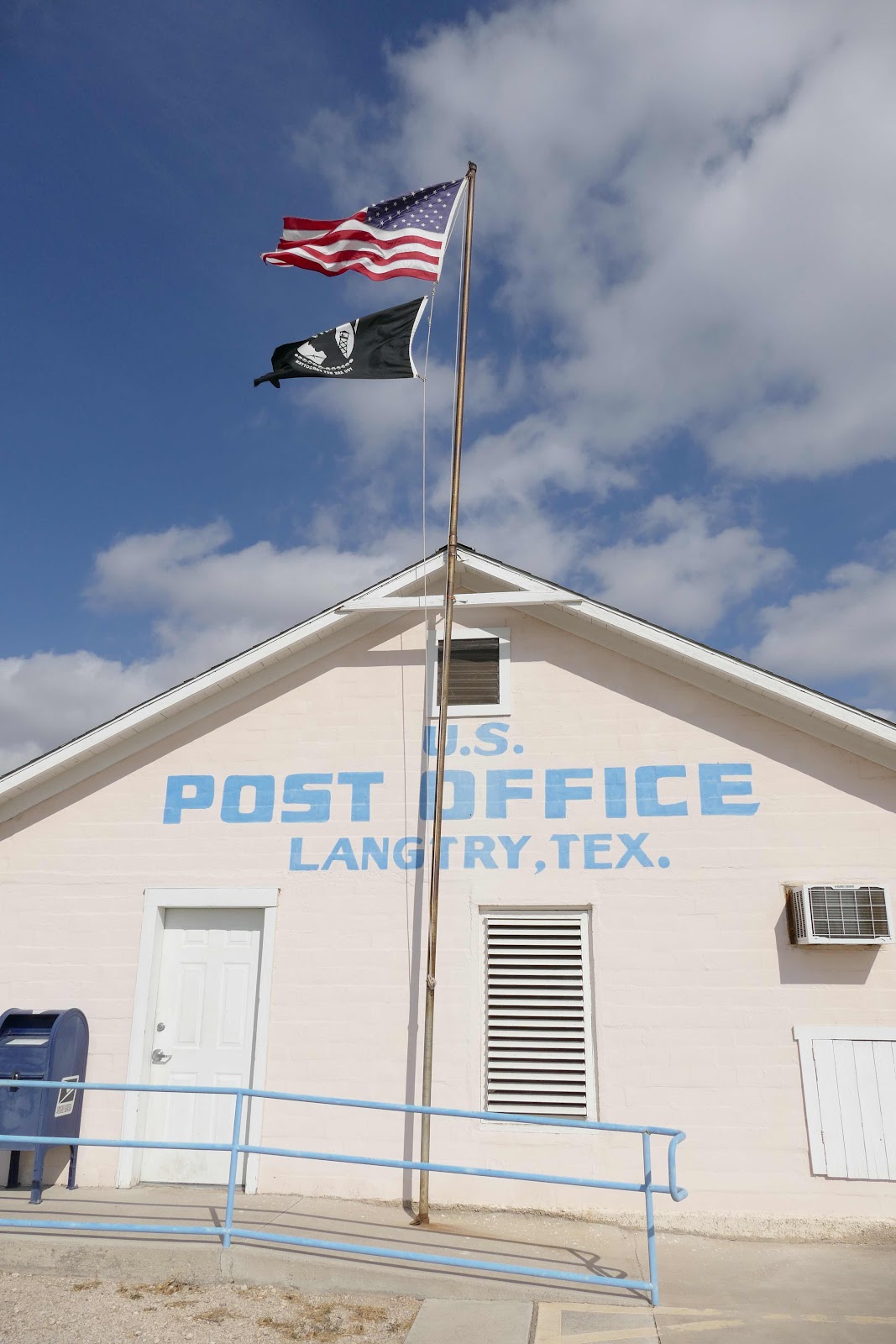 But as you can see they need a Fantasy Fest or similar to get people to show up around here. Rusty owned Main Street and he made the most of it as we walked its length. 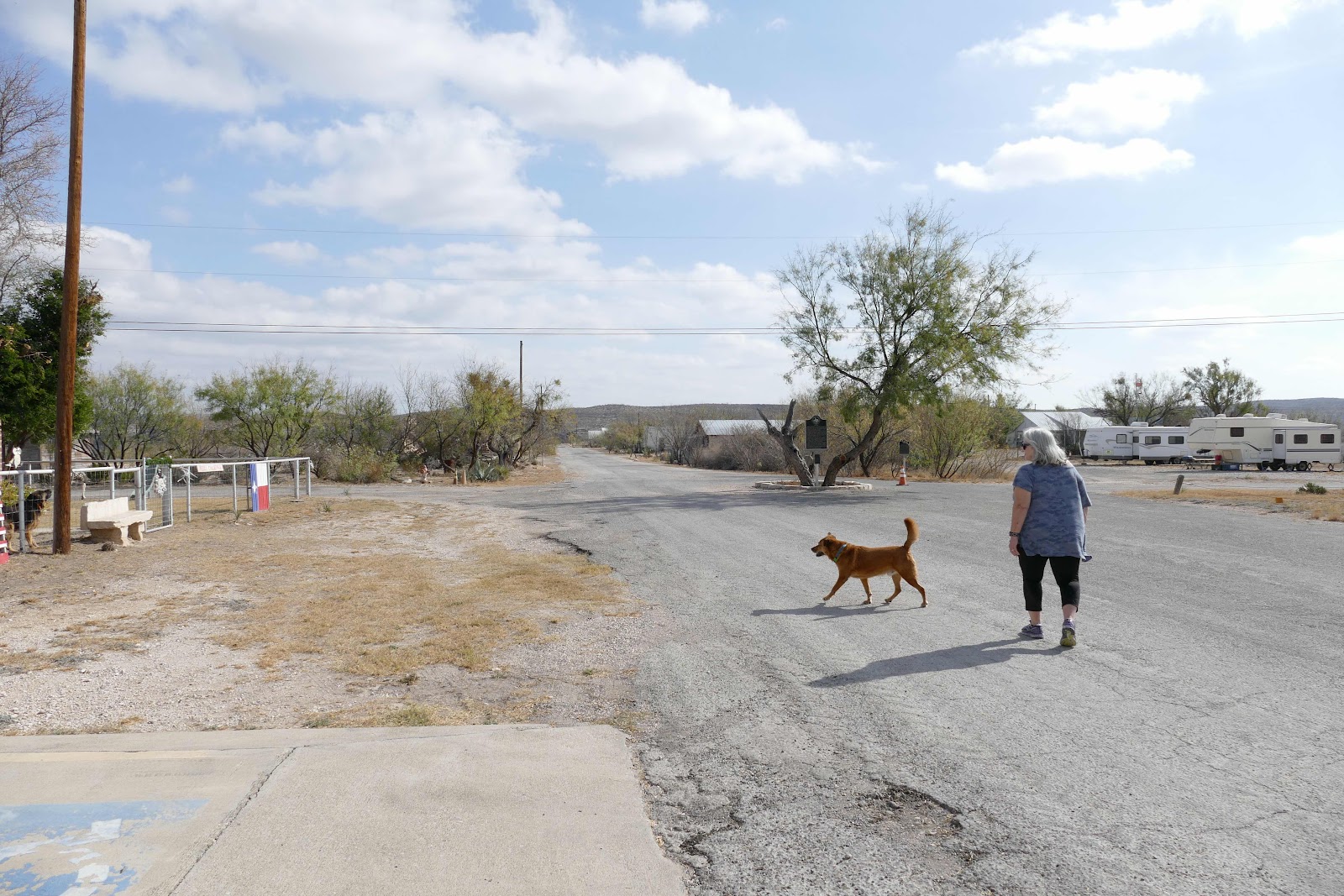 Judge Bean applied his own logic to the law. Essentially the good Judge pocketed the fines he levied as his paycheck so if a case, or a defendant didn't look likely to yield a payout he was not terribly interested in dealing with the case. Hence his fame for rapid judgements. 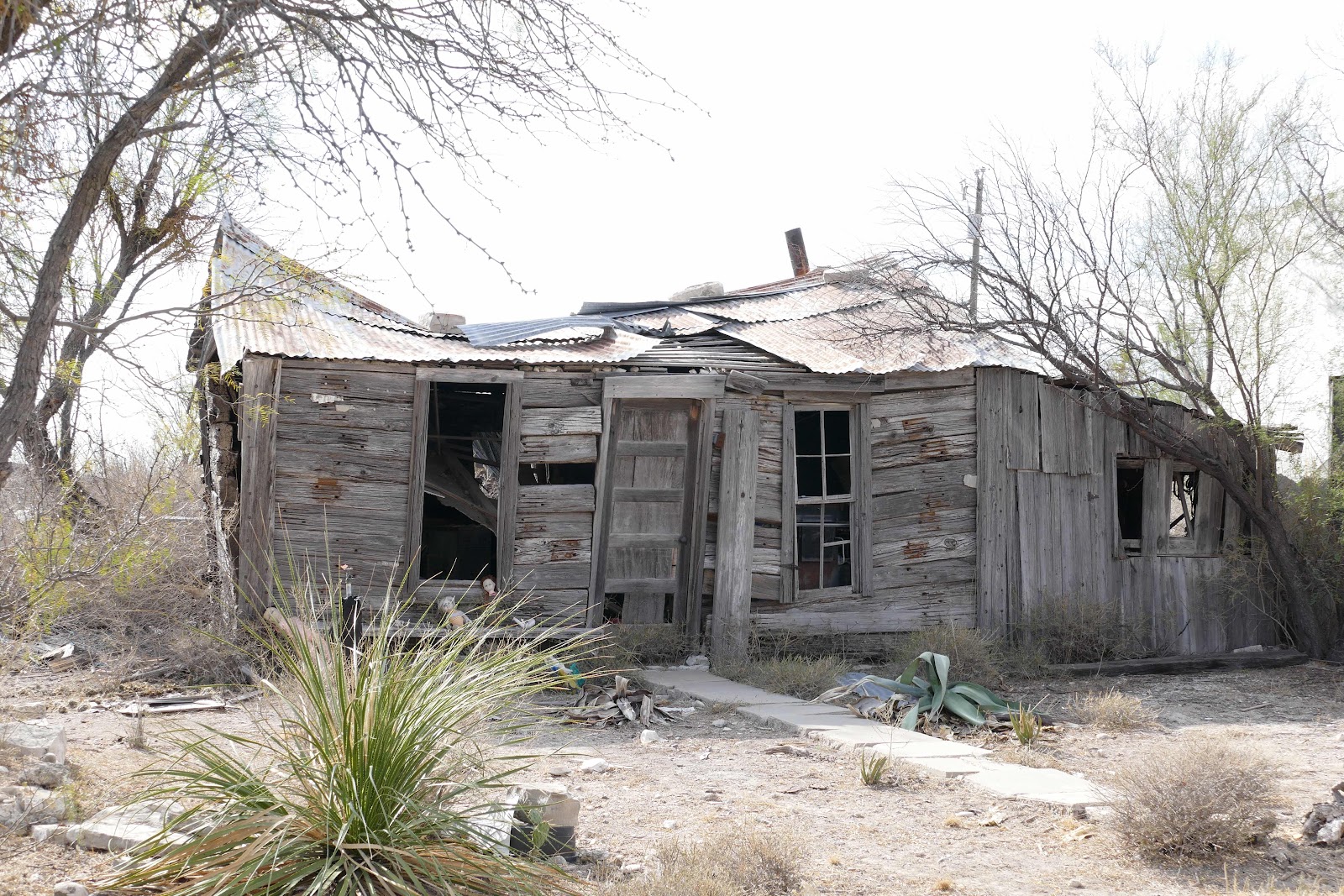 I got the sense from a few historical notes that the Texas Rangers who were the police force in the area were less than enthusiastic about the judge's methods and his judicial reasoning. There is a documented story that a boxing match the Judge wanted to sponsor was not permitted by the rangers so the judge organized the fight anyway. For more color on the colorful judge check Wikipedia: LINK 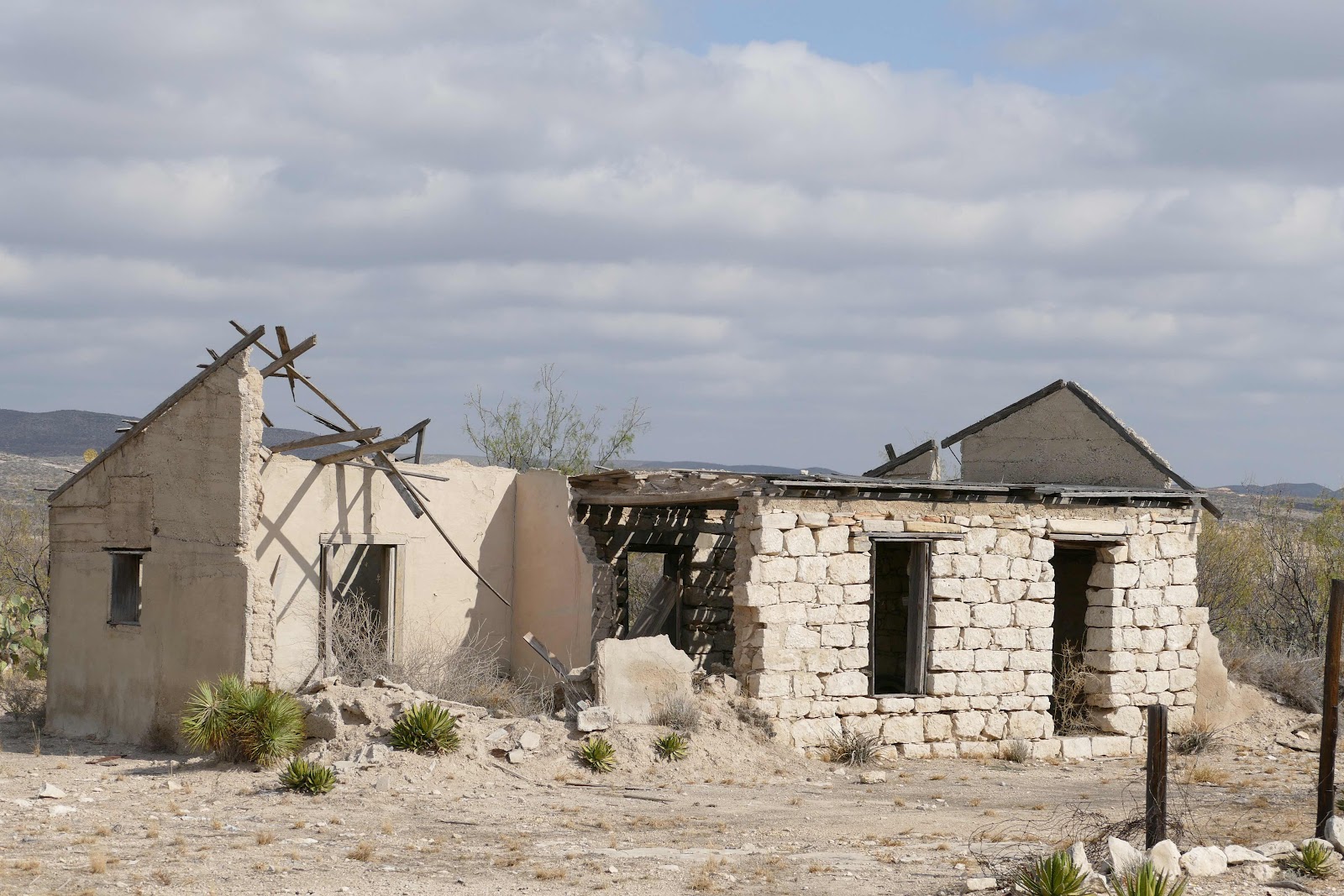 The only thing was he set the bout up on a sand bar in the rover on the Mexican side of the line rendering the rangers powerless to stop it and not endearing himself to them at all. Especially as his notoriety skyrocketed after this act of judicial defiance. 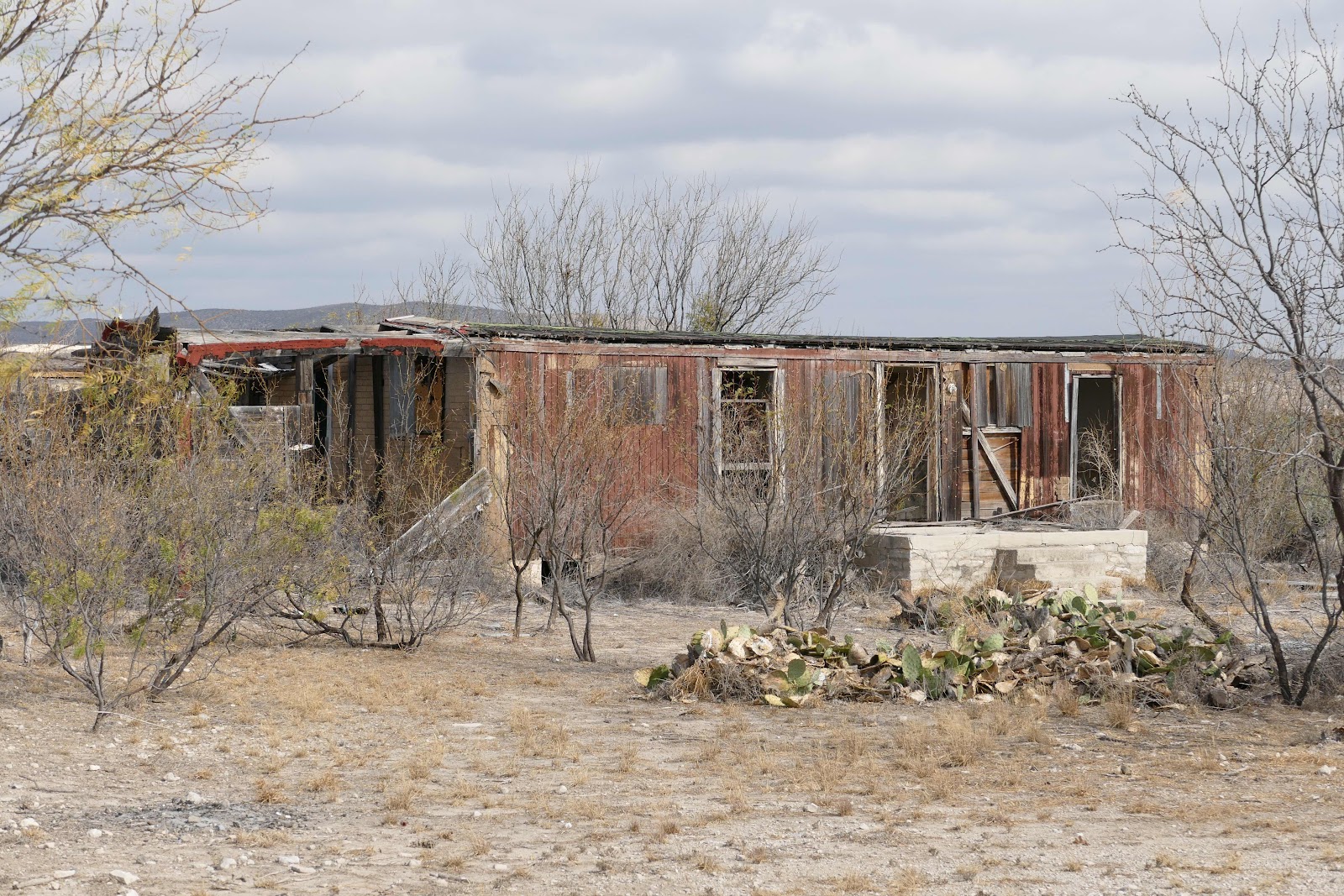 Locally I saw signs of defiance among the rather raggedy homes and down at heel population. A flag with a picture of a 19th century cannon with the slogan "Come and Take It" rang a rather pathetic note. I don't see any of his fellow Texans lining up to take his guns or his rather fragile self respect.. 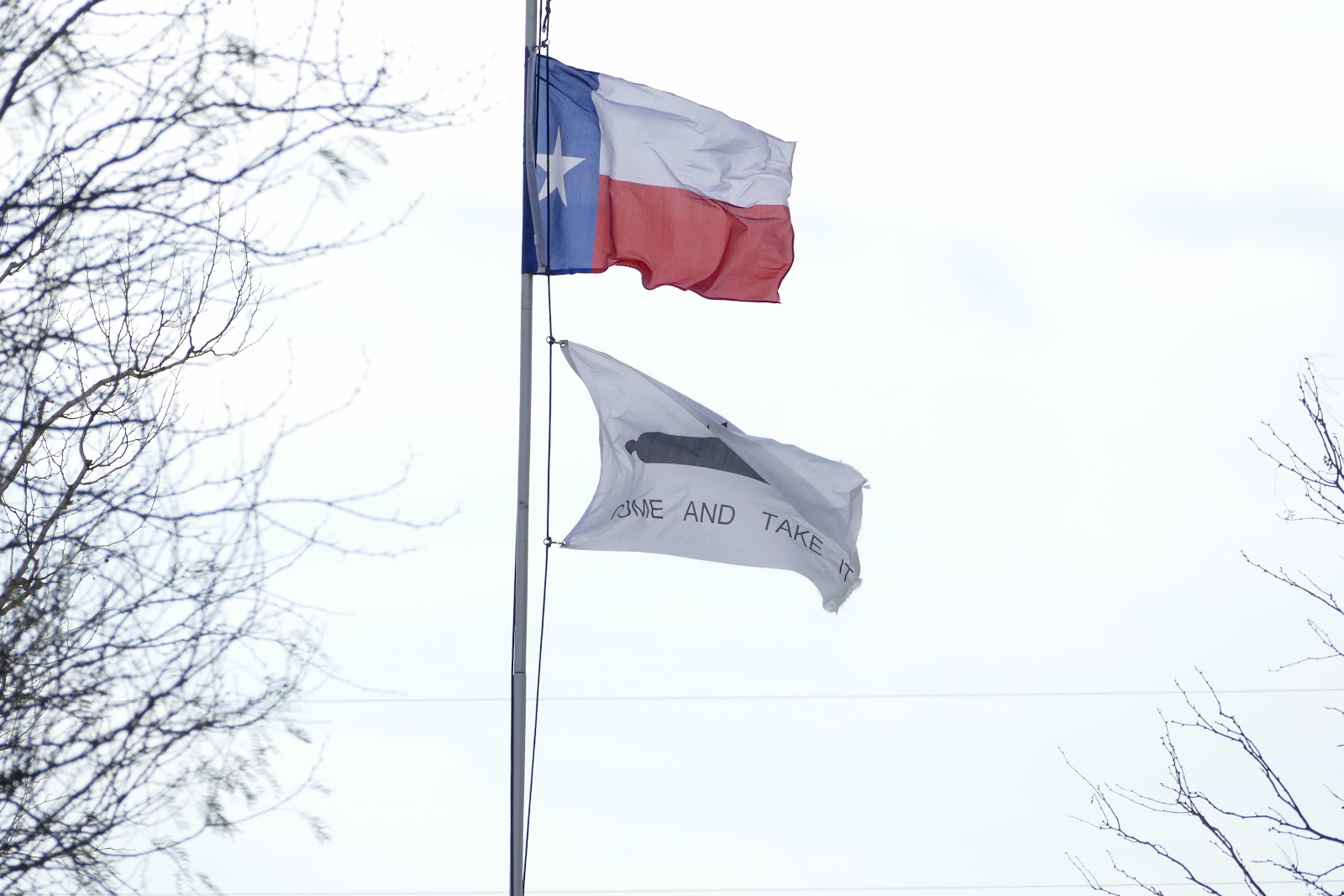 This shabby little house is worried about the state of the nation, which is rather touching in an ironic sort of way considering whitewash and yard work are beyond his ken or his budget. 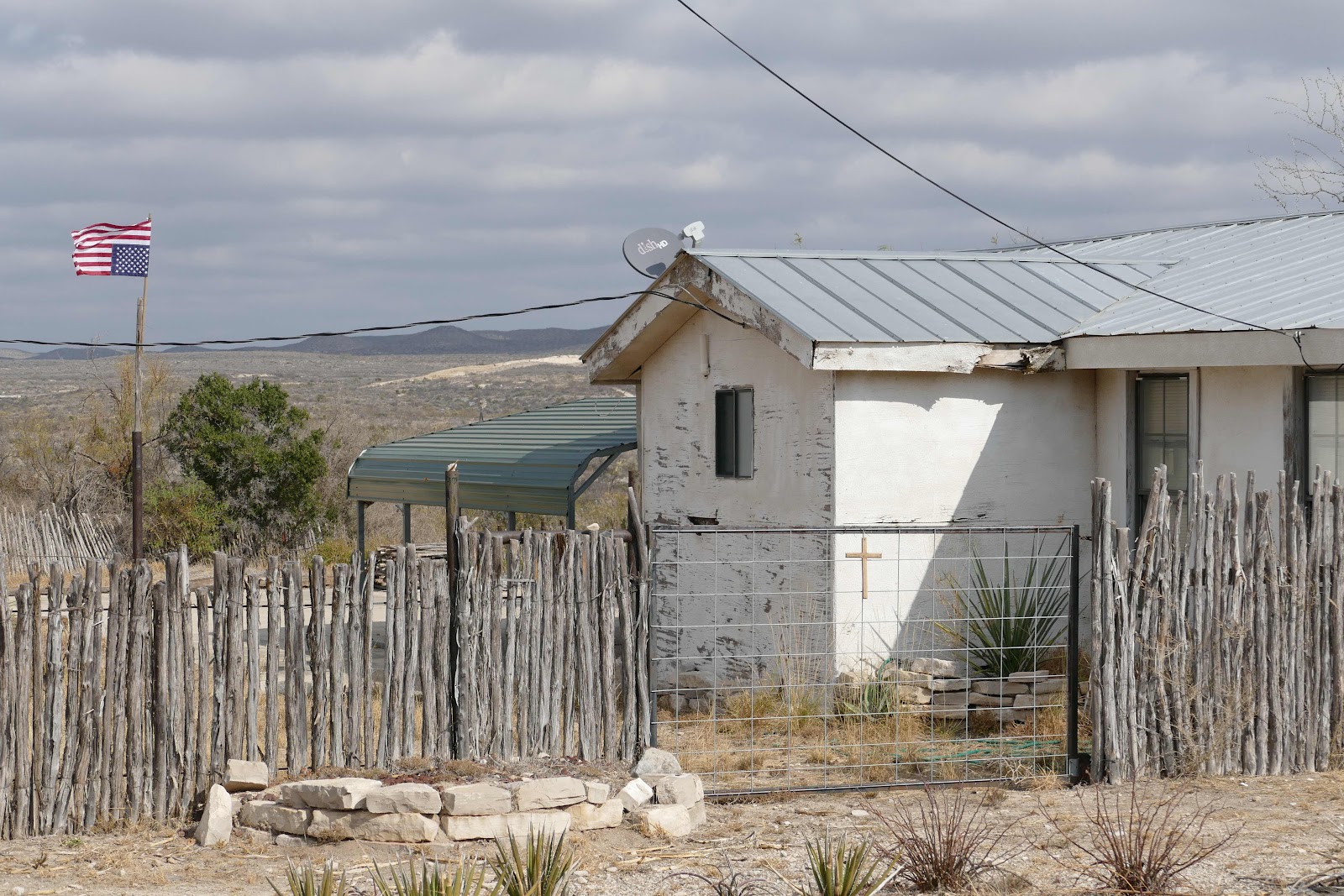 There lies Mexico, indifferent to the thoughts and feelings of forgotten Langtry. 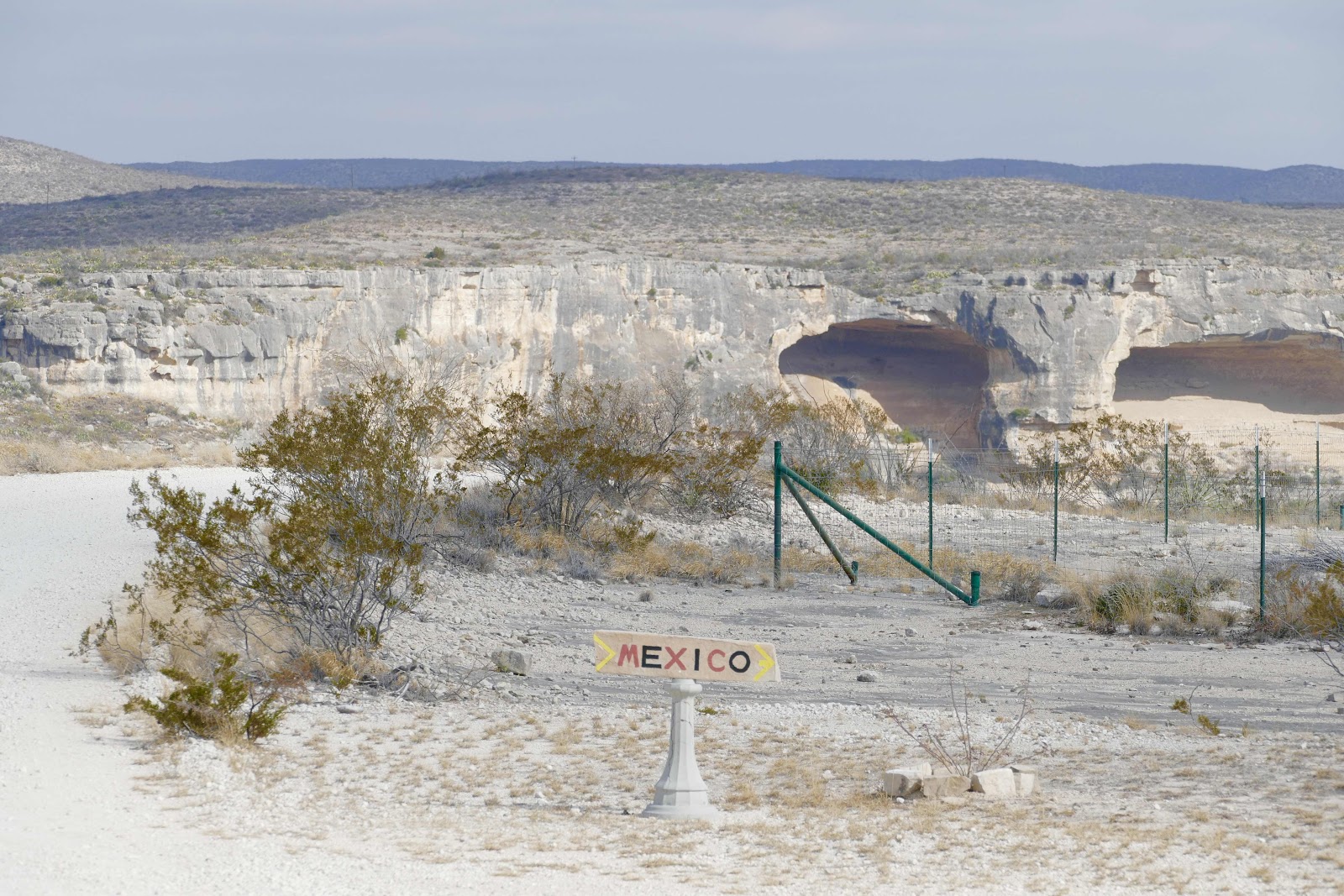 Langtry was founded and named in honor of an eagle's nest in the Mexican cliffs of the river, as explained below: 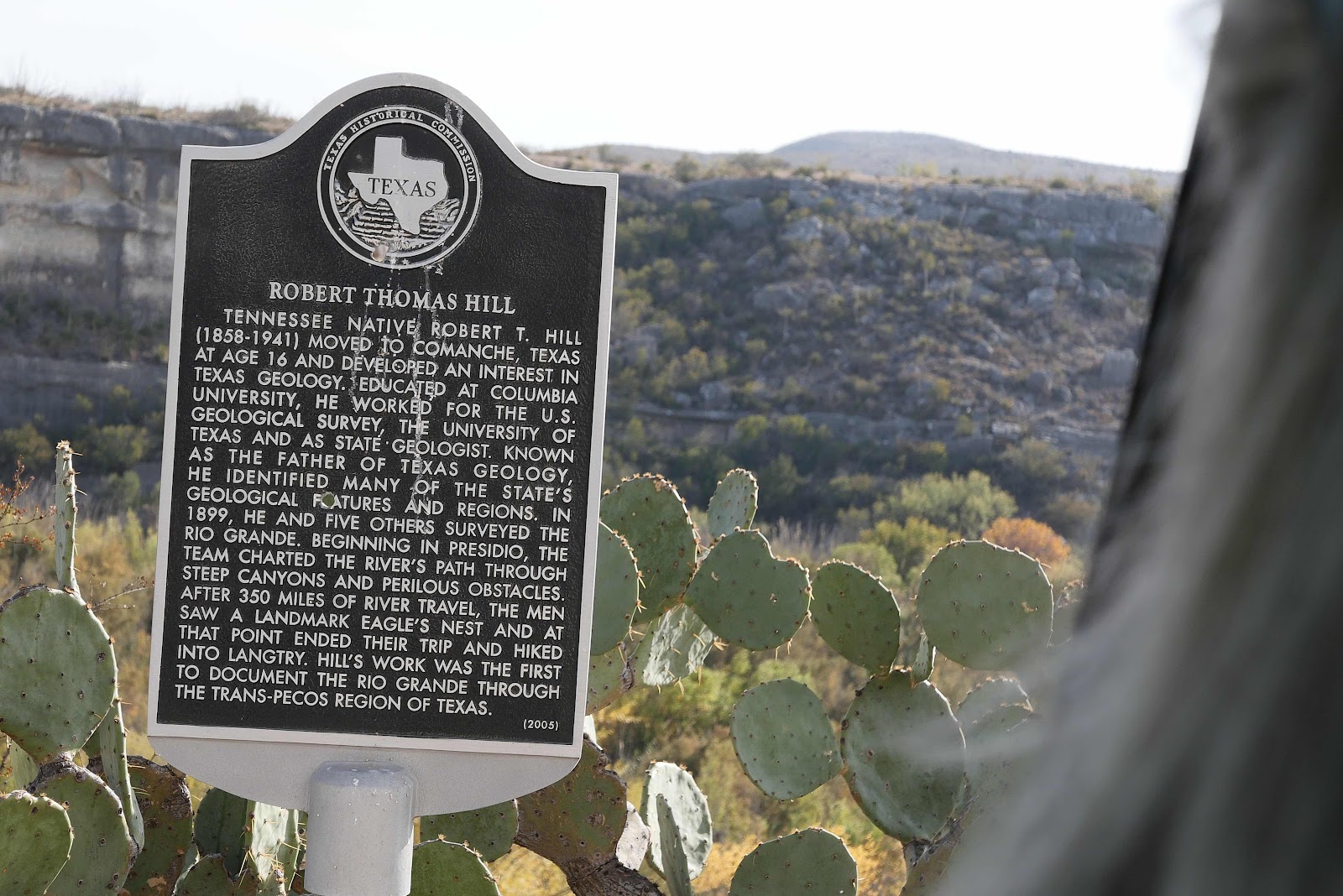 Rusty awoke the interest of this prisoner serving life behind bars. A sweet old boy desperate to play with my superior dog who ignored him and trotted away. 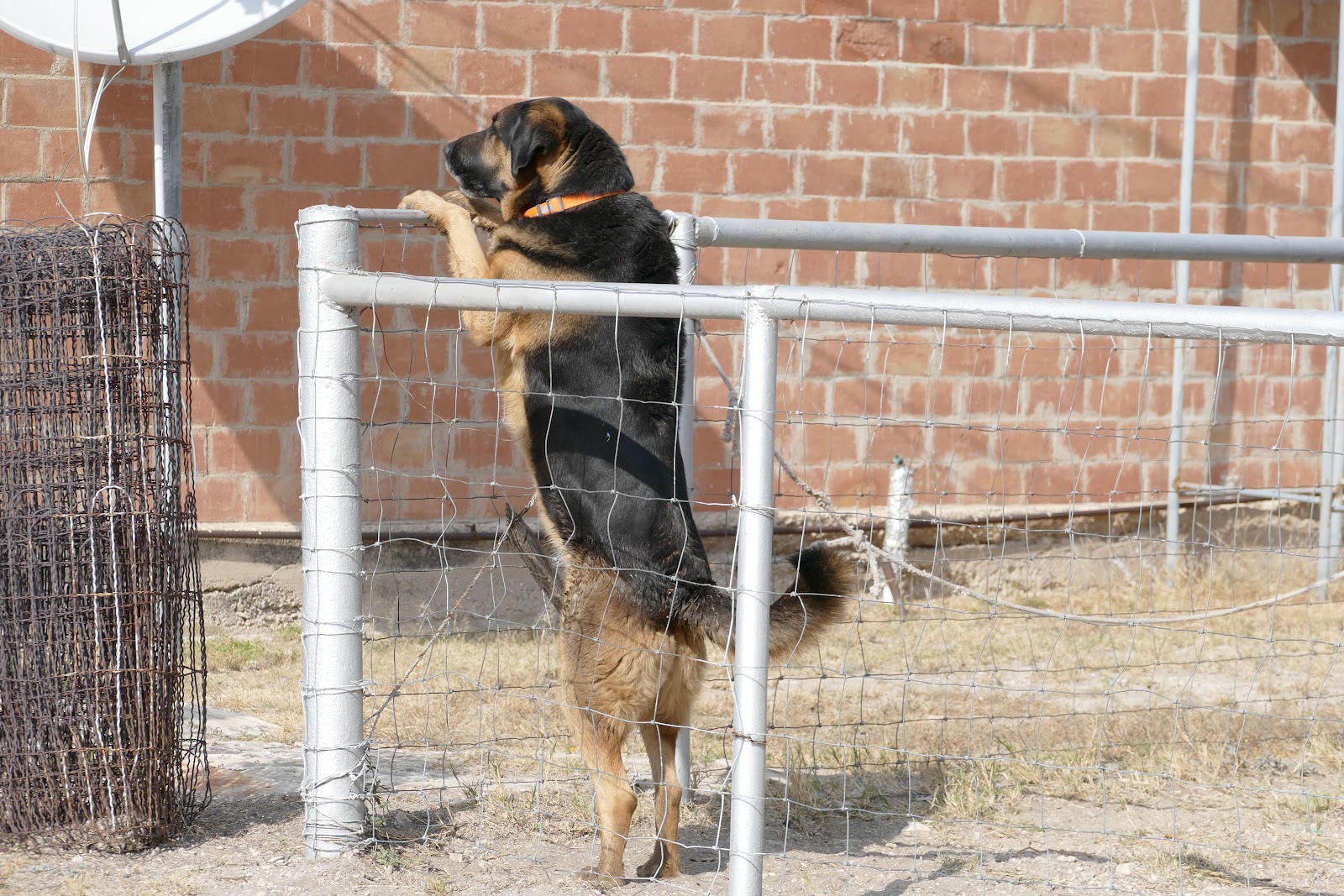 We said goodbye to Langtry the little town that time forgot but in proper style no one noticed or cared. We headed west toward Highway 90. 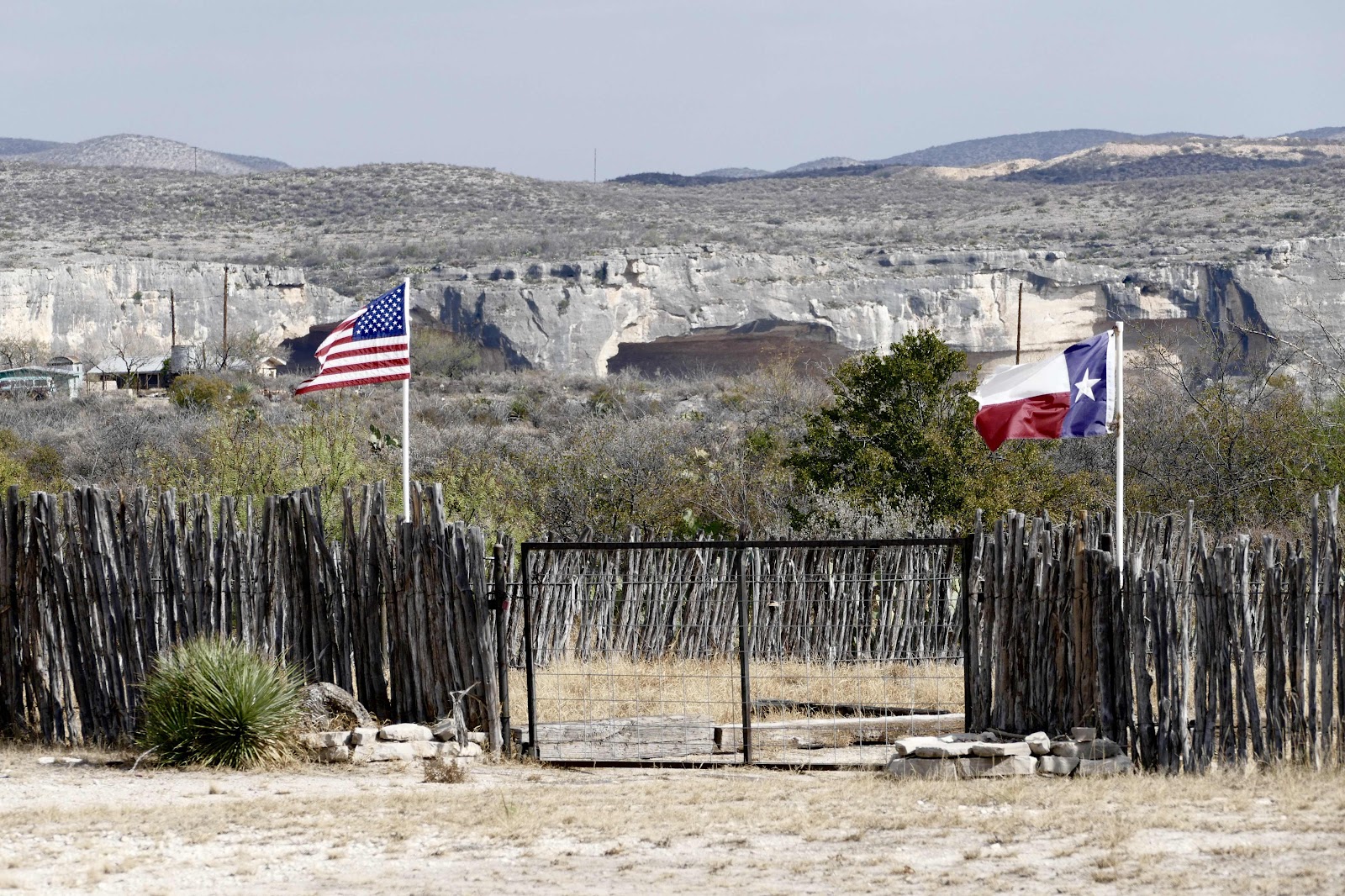 We had conceived a desire for ice cream on the warm windy very dry afternoon and we stopped by the shop, which also sells gas for the desperately unprepared. The ice cream was not delicious but the owner  who does not take credit cards did have a pack of Tamales for sale, a frozen pack of twelve for twelve dollars. Irresistible and they were actually very good. However we ended up giving some away to fellow travelers as our freezer is small the tamales were huge. Eccentric shopping seems to fit the style of West Texas. 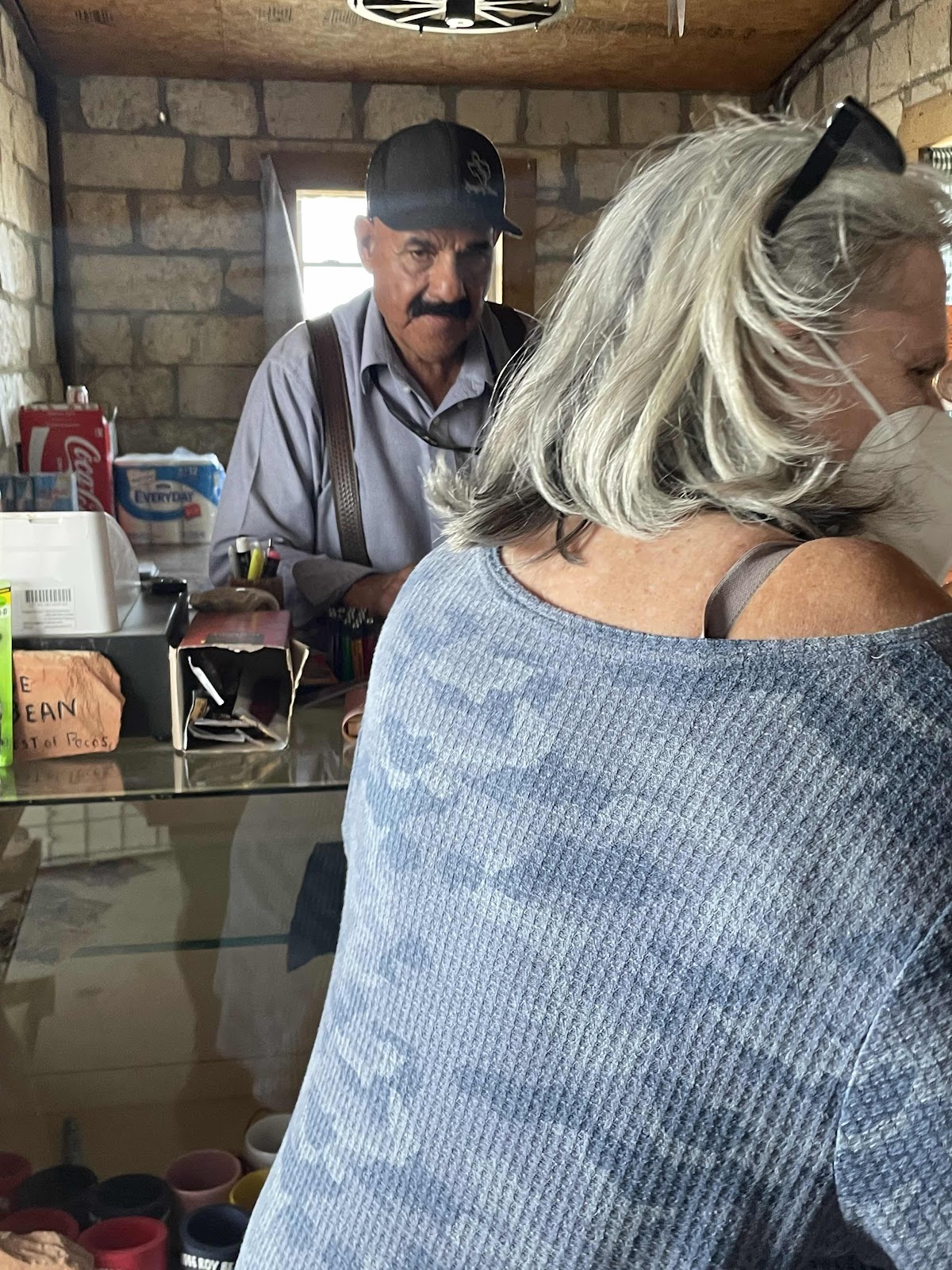 Back on the road dipping and lifting in long straight lines to the horizon. Excellent driving. Posted by Conchscooter at 1:00 AM 2 comments: