The weather is weird in Key West but at least it's not yet a) deadly or b) trying to drown us and in fact the town looks quite pretty in this prolonged drought if you can get past the withered leaves and autumnal drifts of leaves everywhere: 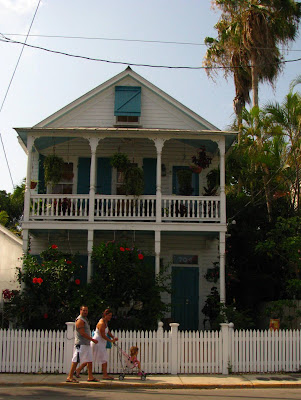 My forays around town lead me to think there are huge numbers of visitors here compared to the normally somnolent nature of key West in the period between snowbird season and summer family fun time.

My street out in the boonies is seeing a resurgence of winter-like walkers and cyclists and compulsive public exercisers. Normally the street goes dead when everyone and their cycling safety gear goes North for the summer but not this year. Helmets and high visibility vests are everywhere along Highway One, not one bit put off by the abnormally high temperatures as the weather office tells us. 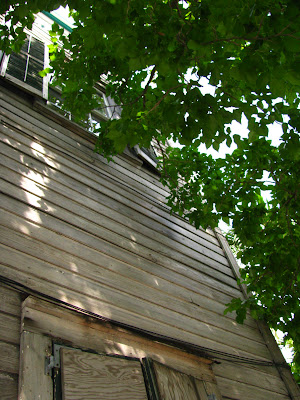 I was mooching around on Elizabeth Street sharing a moment of directional indecision with my dog when I looked up and saw this: 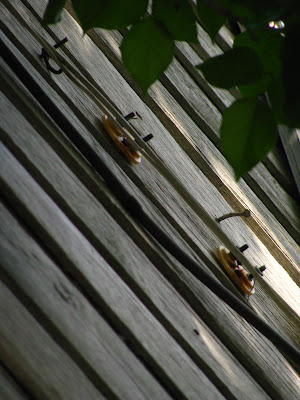 Old electrical wire guides nailed to the wall. You just never know what you'll spot when your dog calls a halt to the walk for a breather and you decide to look up. 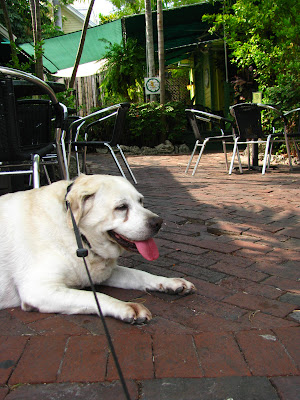 She took another pause around the corner in the back of Kermit's original Key Lime Shoppe. Standing there I saw nothing of more interest than my dog, so I took a gratuitous picture of her.
Posted by Conchscooter at 5:01 PM 2 comments: Links to this post

Coming off the slope of the Seven Mile Bridge, heading south toward Big Pine Key I thought this view of the bridge was worth the picture, especially as I watched the boat buzzing alongside the penned in traffic. It looked much more fun on the water than standing in line traveling north on the bridge. 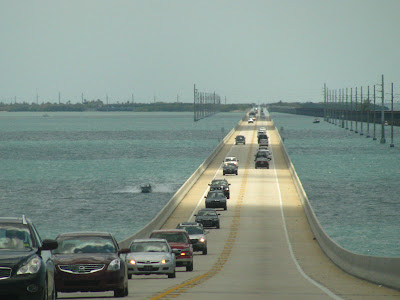 It was another of these astonishingly pretty days of what is effectively summer even though it won't rain for love money or other bribes. 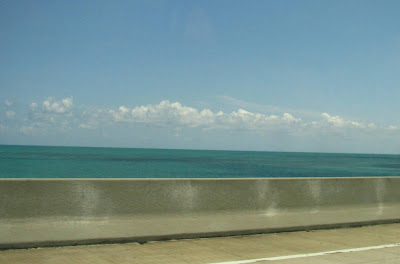 I often find people like to drive slowly on the famous bridge which as a result ends up with me passing the visitors as I prefer to be at homerather than staring up their exhaust pipes. It does not seem to be a well known fact but the dotted double yellow lines on the bridge do allow passing though, like anywhere in the Keys if you are going to pass you want to do it cautiously. Some callow youth killed a couple of strangers here a few months ago in a head on that closed the road for some considerable time. Looking in my mirror this grotesque contraption followed my example: 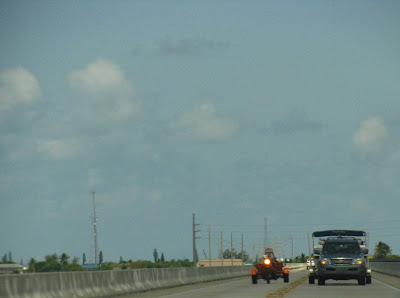 Darth Vader on an orange tricycle followed me across the bridge. I was surprised by how handy the contraption appeared to be. I see more and more tricycles appearing in various guises on the roads so I guess a simple old fashioned hack as a sidecar is known, is no longer desirable for many riders. I had always planned on getting a sidecar for my motorcycle when balancing becomes tricky but perhaps I will have to harness something like this instead. 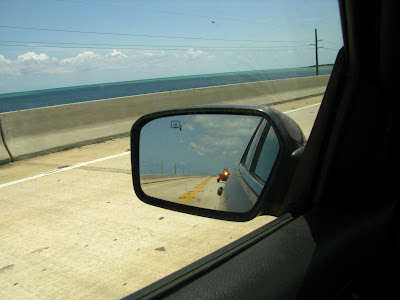 That would shock the wife if she went downstairs one day and saw the Bonneville had been traded in for a Volkswagen engine in a tricycle...It would shock me too.
Posted by Conchscooter at 11:01 AM 4 comments: Links to this post

Construction sites pop up around time from time to time, proving Key West's resilience even as the national penchant for recessionary economics continues Up North. 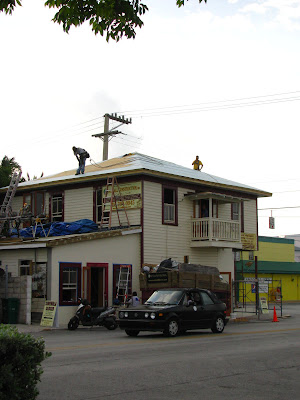 This building on First at Flagler has been a wreck as long as I can remember. They announced big plans in the newspaper and now the building is coming back. Faith in the future is all it takes... And this place below that used to be...and before that was...has a little sign on the door at Simonton and Truman announcing the imminent arrival of the Bangla Deli. I was never a great fan of the original Deli at this location though many were. Eat N Grinn never made it onto my radar, which is tough to do in a town with many decent places to eat of long standing and fairly certain reliability. However if Bangla Deli comes to fruition and offers Indian food (or Bengali food or whatever from the Indian subcontinent) my wife will form a line out the door. 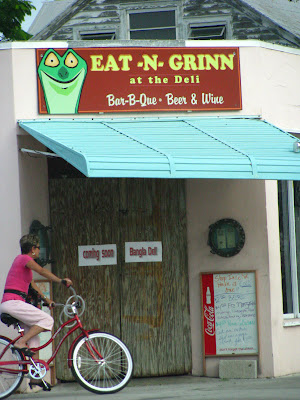 Despite the lack of convenient parking. Scaffolding means construction: 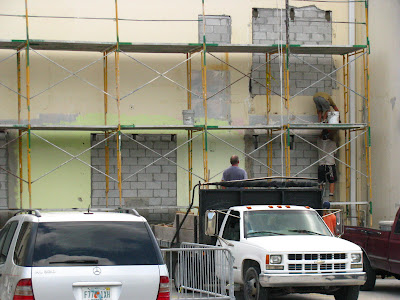 What comes next here who knows. I shall be interested to see what happens to the former sail loft. The empty building next door has two sets of development fans, if you read the anonymous comments in the paper. I'm with the brew pub contingent as I can't bowl to save my life. Where I grew up in Italy we rode mopeds owing to the severe shortage of bowling alleys. 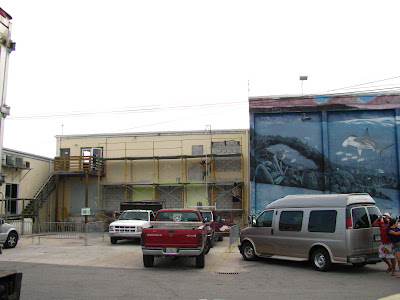 On the other hand I know tons of people miss the old bowling alley on South Roosevelt so I suppose I won't whine too much if that is what comes to the former Waterfront Market. Perhaps the former Geislin sailmaker's loft will expand the market space. Perhaps not. 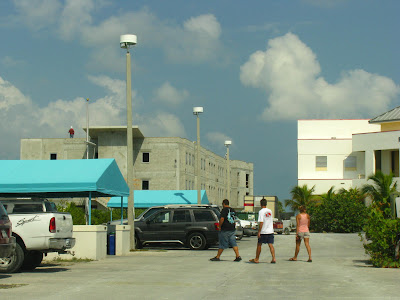 I had thought the new dorms at the Florida Keys Community College were going to appear in the parking lot behind the cafeteria but instead the much more sensible idea seems to have taken root to stick them in the very back of the college next to the Public Safety training g building which also houses the dive school. This last legacy of the Landesberg-Boyle administration is coming along nicely and should help the school attract students from out of state. Onwards and Upwards!
Posted by Conchscooter at 5:01 AM 3 comments: Links to this post